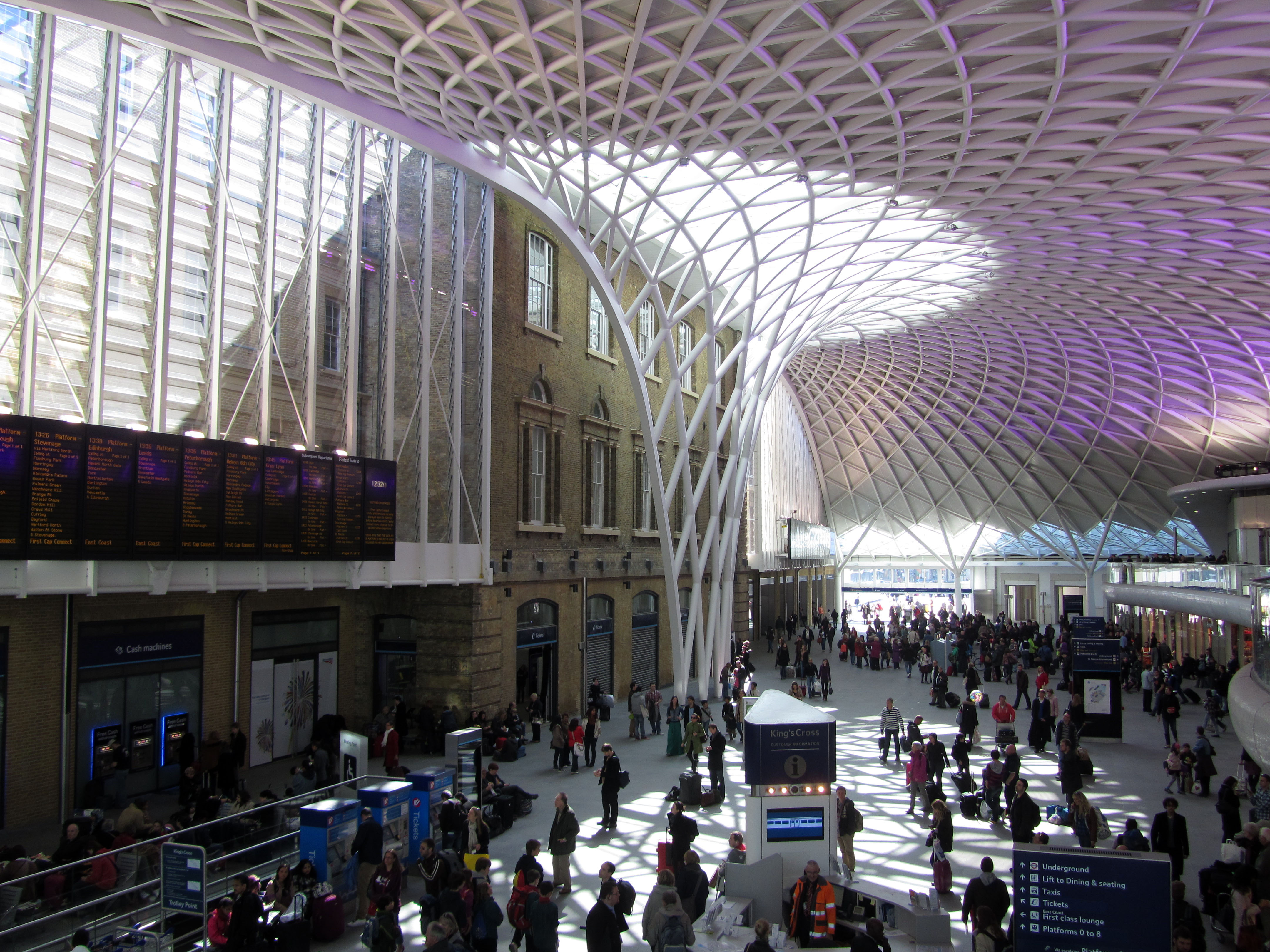 King’s Cross station has a new concourse, enclosed by a beautiful, sculptural roof which grows from a steel trunk and spreads into a tree-like canopy of intersecting branches. They meet the ground along the semi-circular perimeter, which is a continuation of the arc of the Great Northern Hotel, which was in turn shaped by the curve around a bend of the River Fleet.

Outside the station, at the beginning of the newly built King’s Boulevard, is a map to remind you where you are. 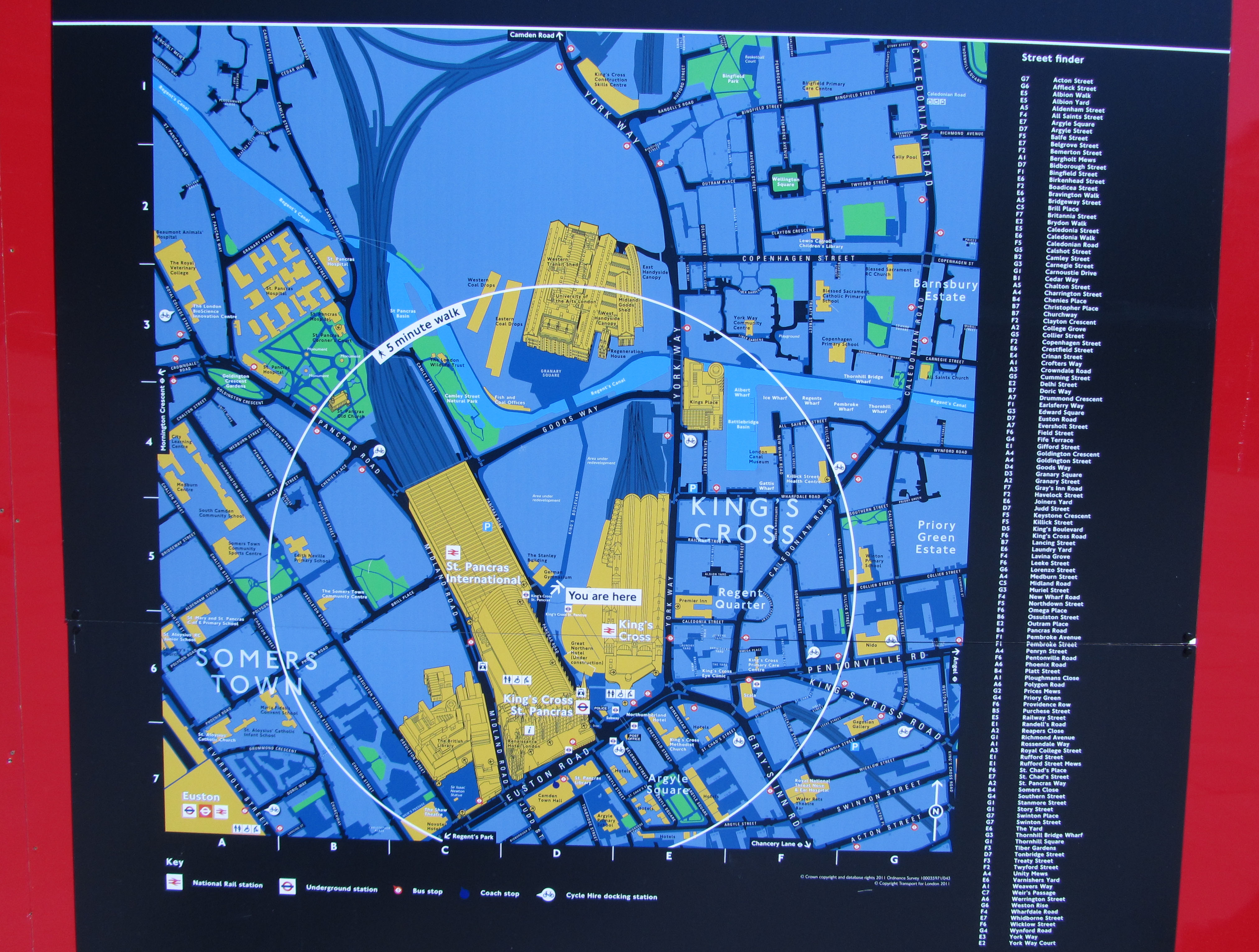 This aerial photograph shows a similar plan. Note how the railway lines out of King’s Cross disappear underground and the lines from St Pancras remain overground. 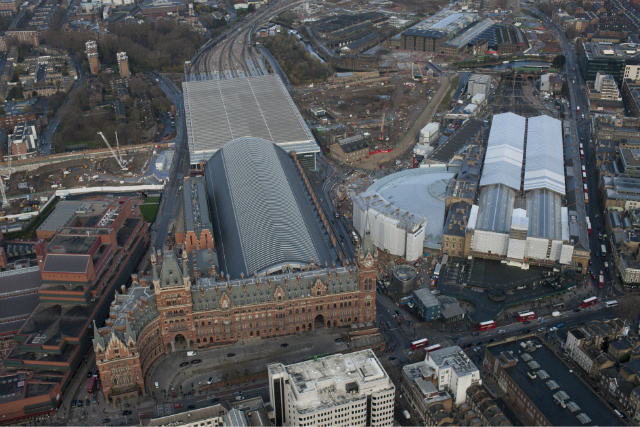 At the top of King’s Boulevard on Goods Way you can look down and see the King’s Cross tracks enter the tunnel beneath you. 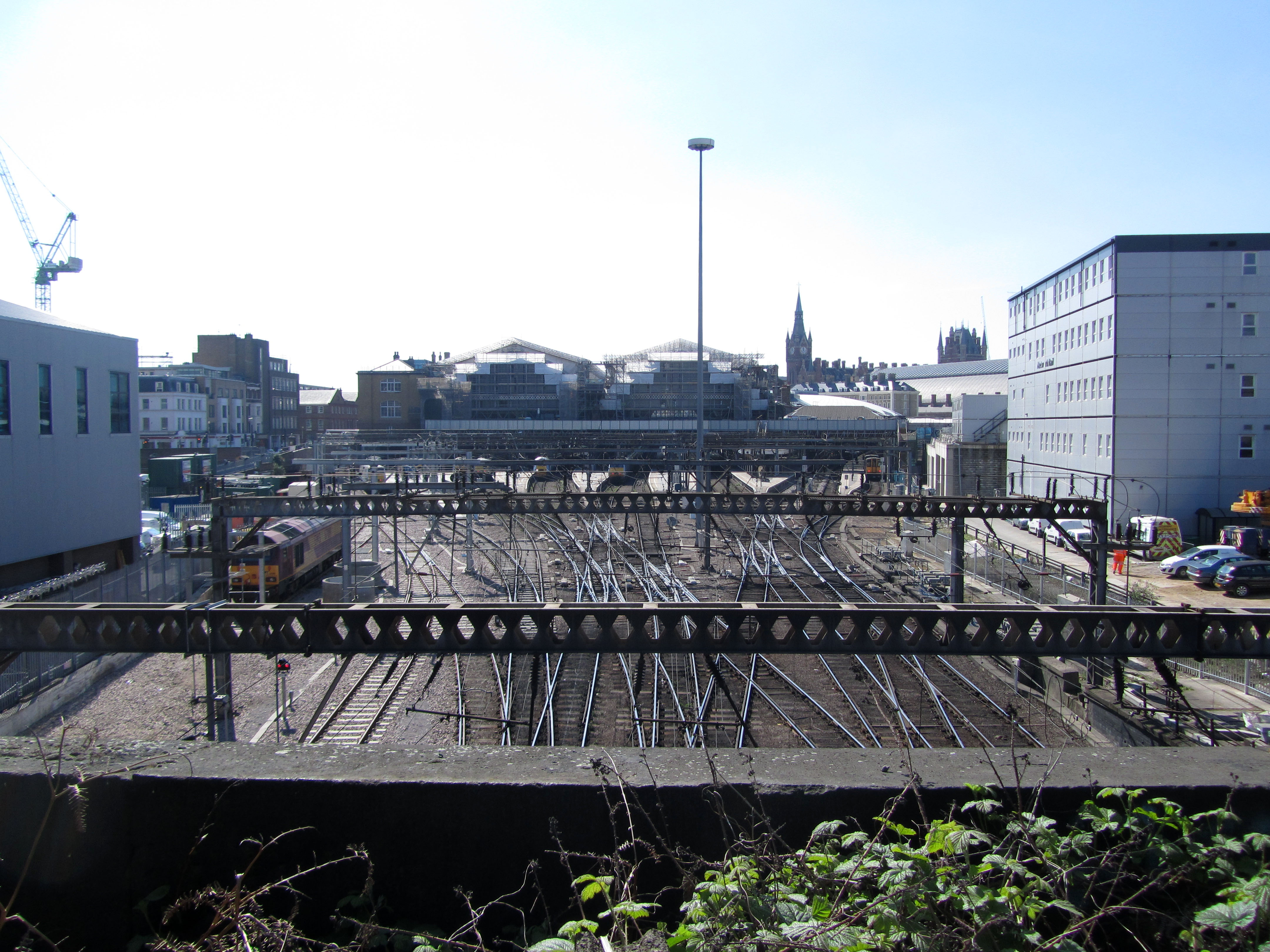 (Label 1) St Pancras Old Church stands on one of Europe’s most ancient sites of Christian worship, possibly dating back to the early 4th Century. The present building has been here since the 11th or 12th Century and is situated close to the River Fleet, which was culverted in the 19th Century. 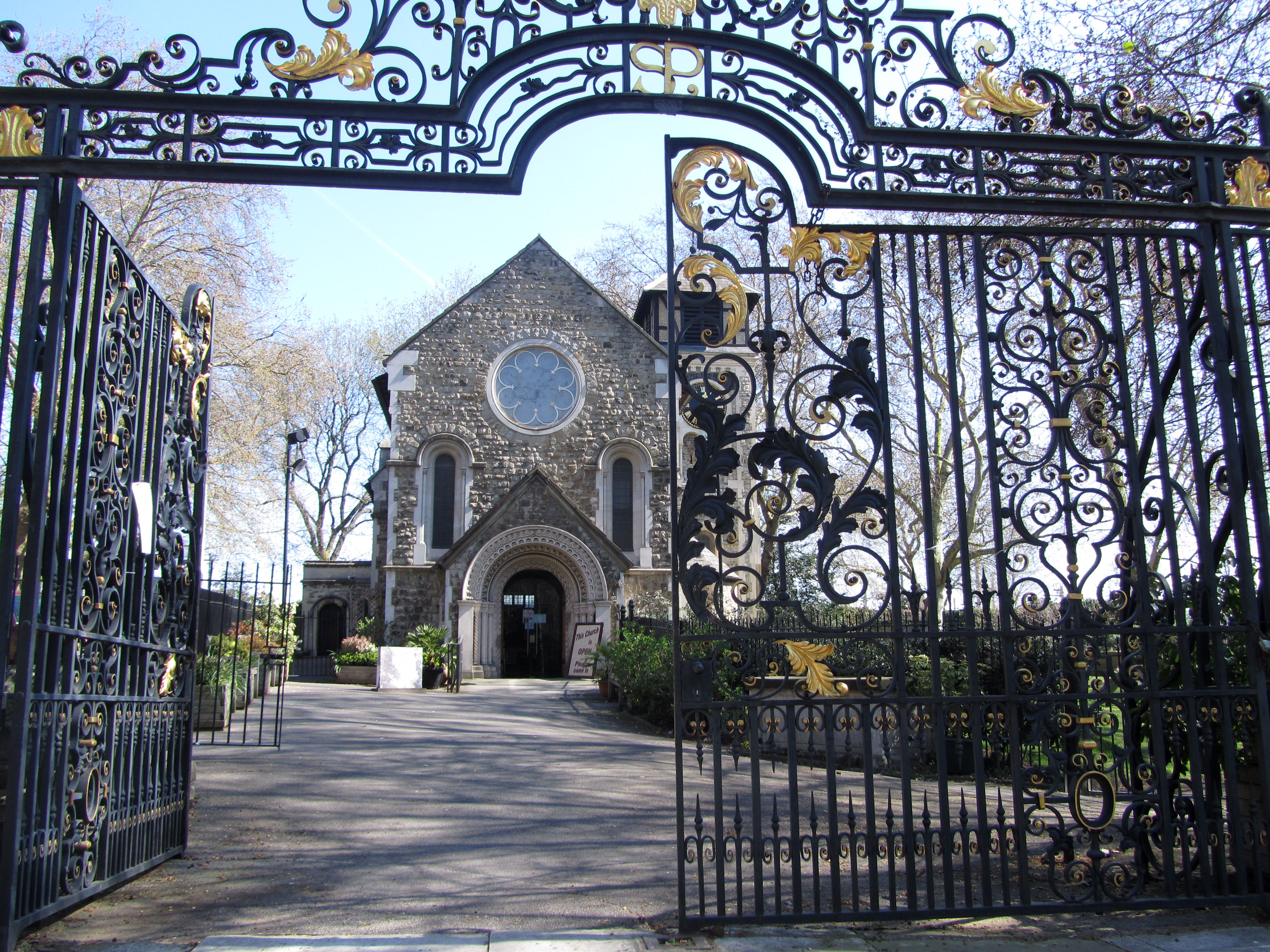 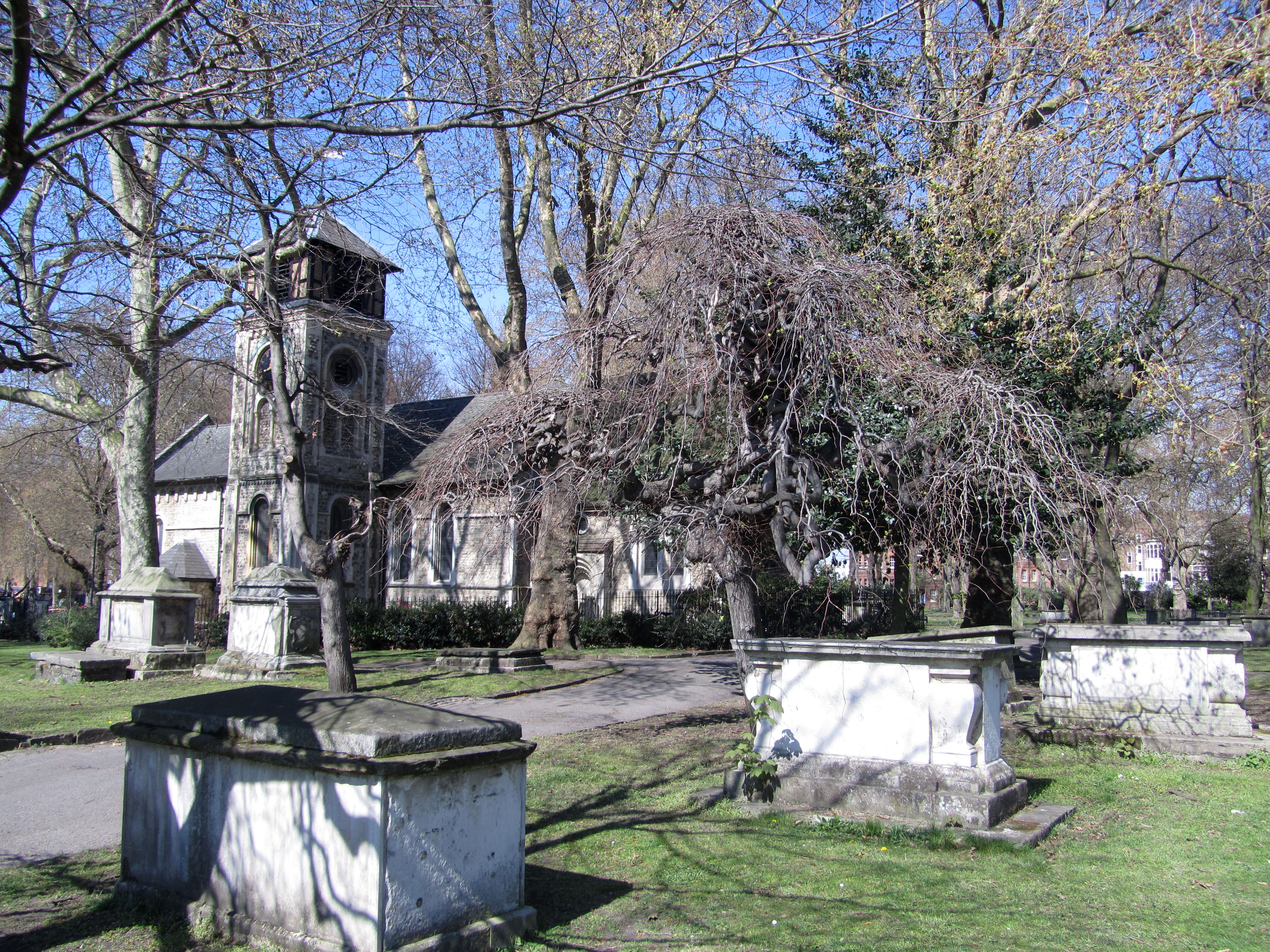 During the Civil War the church was used as a barracks and stable for Cromwell’s troops. Before the troops arrived, the church’s treasures were buried for protection and then lost, only to be rediscovered during restoration work in the early 19th Century. A 6th Century altar stone was among the items discovered. Legend has it that the stone belonged to St Augustine of Canterbury. Little remains of the original medieval church, but in the north wall of the Nave there is an exposed section of Norman masonary. 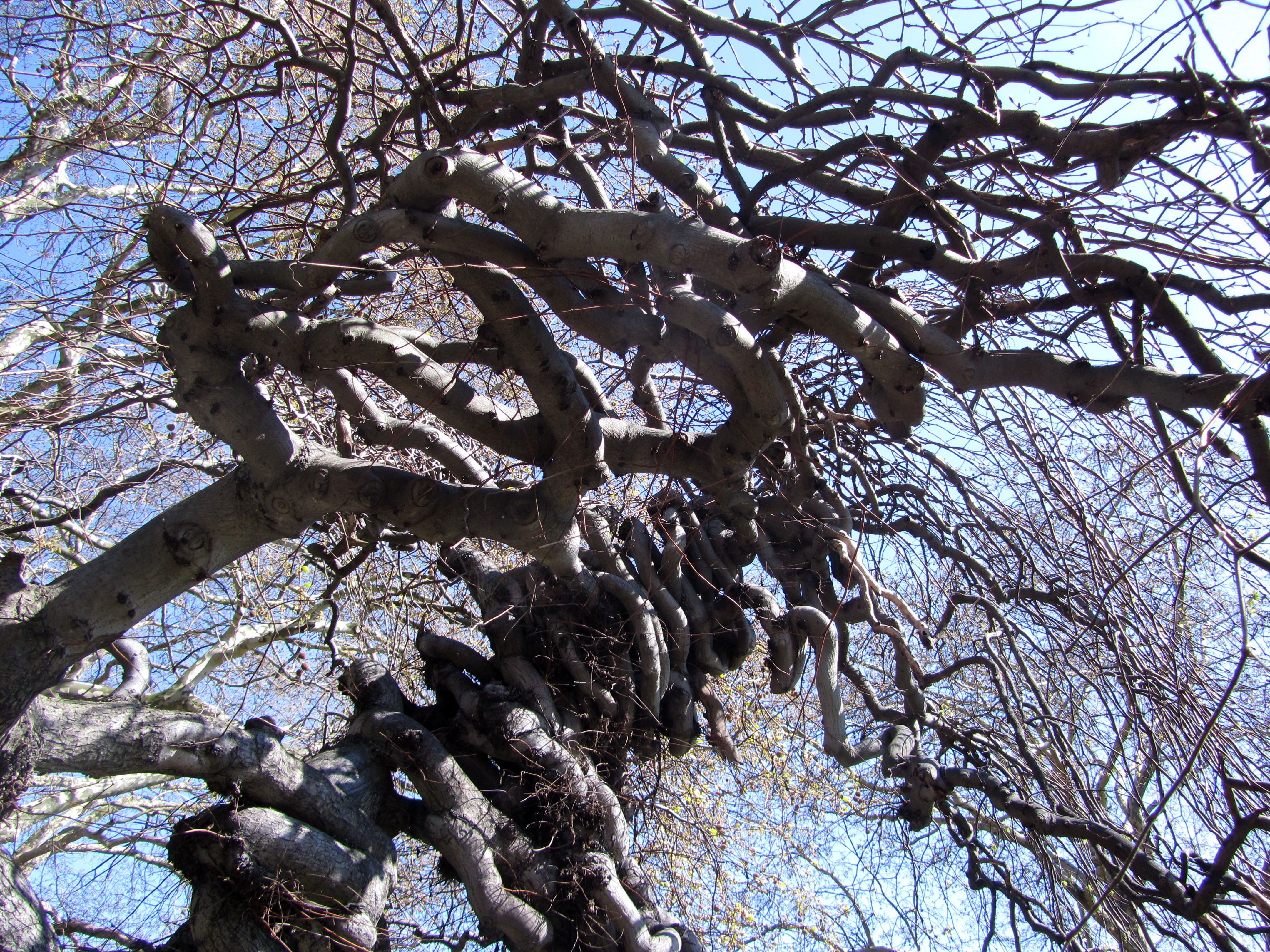 These elm trees in the churchyard have grown in such a strange and contorted way, they almost appear to be plaited. Is this natural or have they been trained this way? Or are they supernatural zig-zag lightning trees? 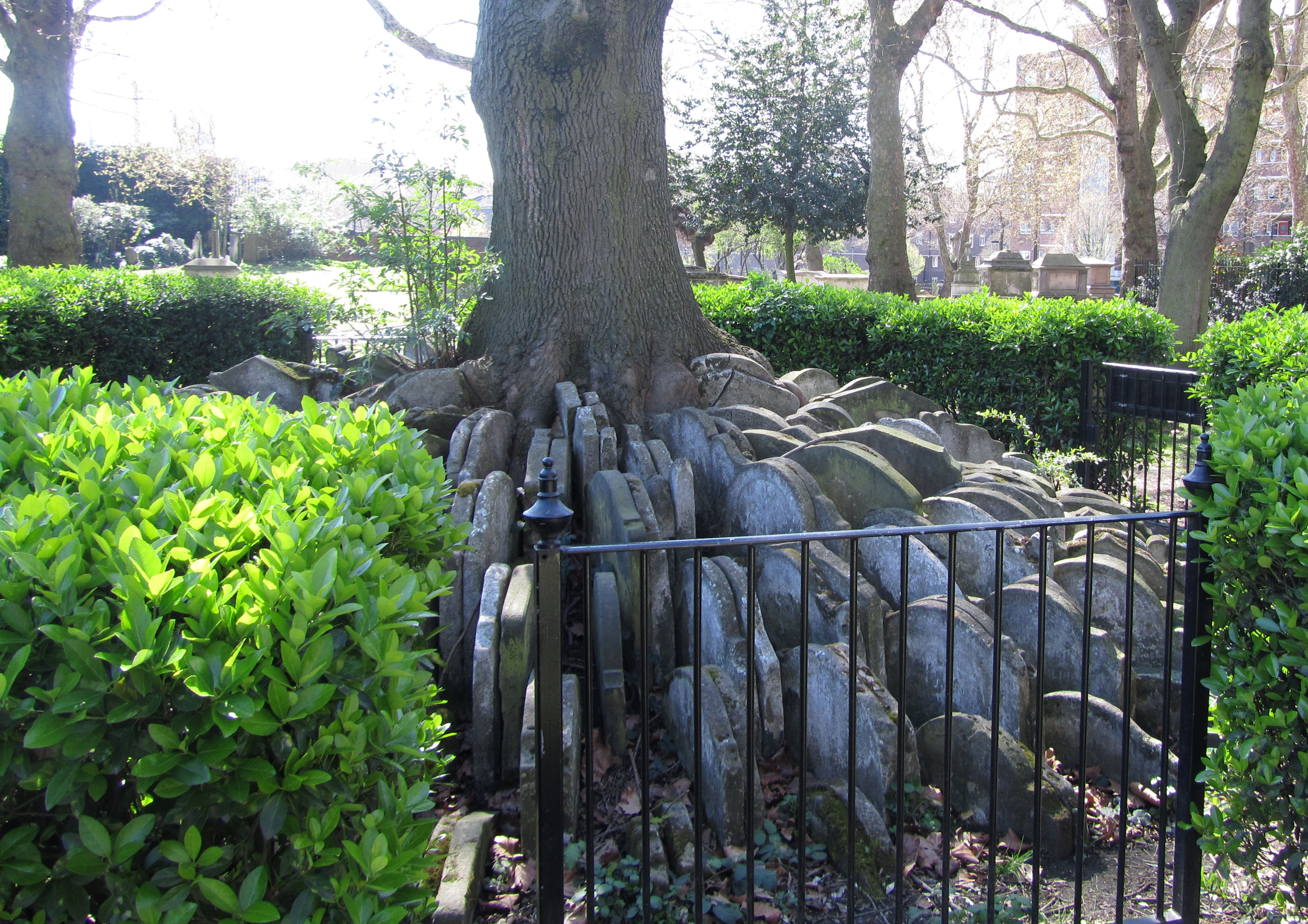 There is another tree here with a story to tell. The Hardy Tree.

(Label 2) The novelist and poet Thomas Hardy (1840-1928) is best known for his novels set in rural ‘Wessex’, however before turning to writing full time he studied architecture in London from 1862-67 under Mr Arthur Blomfield, an architect based in Covent Garden. During the 1860s the Midland Railway line was being built over part of the original St Pancras Churchyard. Blomfield was commissioned by the Bishop of London to supervise the proper exhumation of human remains and dismantling of tombs. He passed this unenviable task on to his protégé Thomas Hardy in c.1865. Hardy would have spent many hours in Old St Pancras Churchyard during the construction of the railway, overseeing the careful removal of bodies and tombs from the land on which the railway was being built. The headstones around this Ash tree (Fraxinus excelsior) would have been placed here around this time. Note how the tree has since grown in amongst the stones. 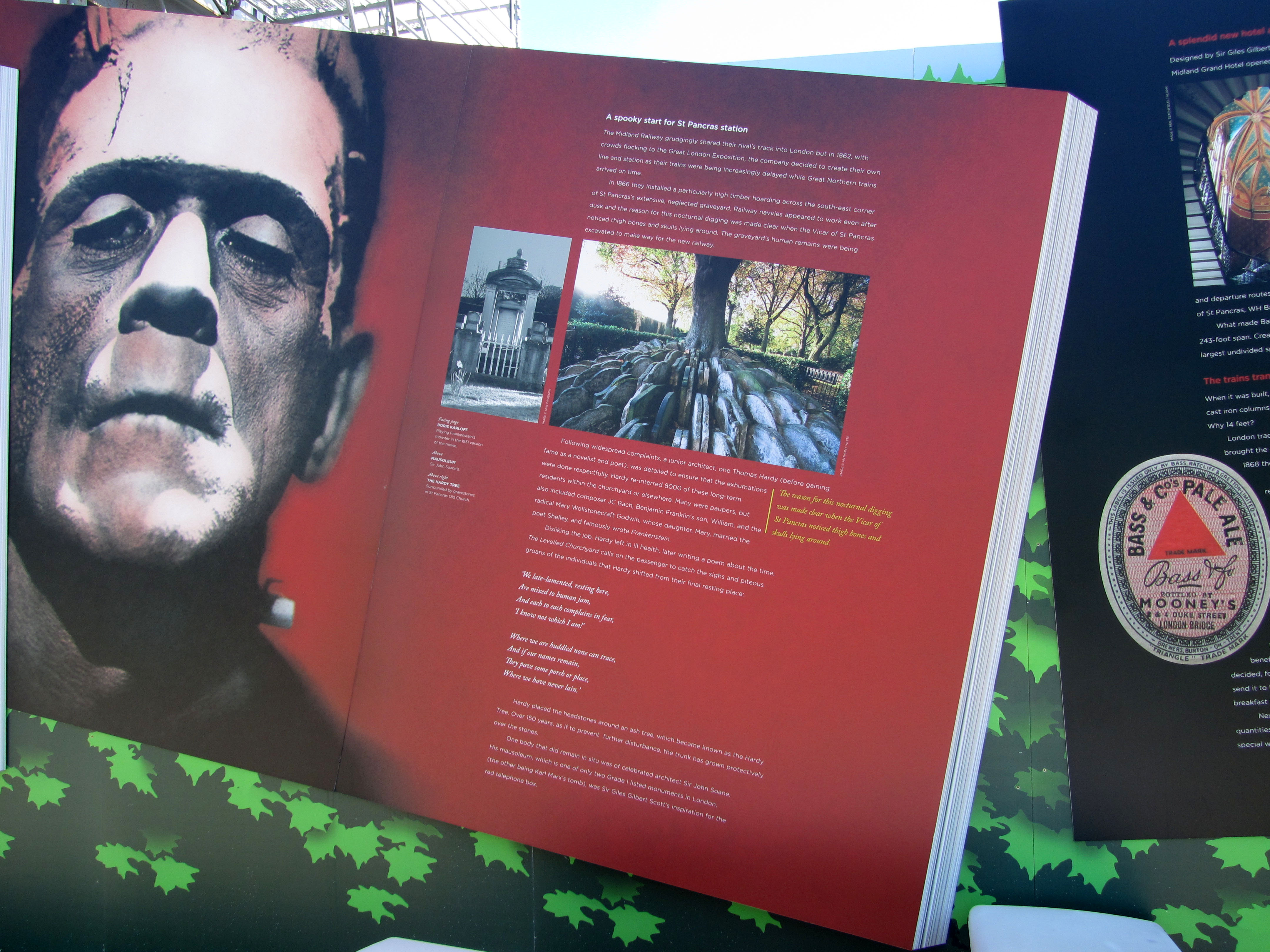 Back down along King’s Boulevard, the current rebuilding project is masked by hoardings displaying tales of local history. One tells the Hardy Tree story this way:

(Label 3) In 1866 they installed a particularly high timber hoarding across the south-east corner of St Pancras’s extensive, neglected graveyard. Railway navvies appeared to work even after dusk and the reason for this nocturnal digging was made clear when the vicar of St Pancras noticed thighbones and skulls lying around. The graveyard’s human remains were being excavated to make way for the new railway.

Following widespread complaints, a junior architect, one Thomas Hardy (before gaining fame as a novelist and poet), was detailed to ensure that the exhumations were done respectfully. Hardy re-interred 8000 of these long term residents within the churchyard or elsewhere. Many were paupers, but also included composer J C Bach, Benjamin Franklin’s son William, and the radical Mary Wollstonecraft Godwin, whose daughter Mary, married the poet Shelley, and famously wrote Frankenstein.

Disliking the job, Hardy left in ill health, later writing a poem about the time. The Levelled Churchyard calls on the passenger to catch the sighs and piteous groans of the individuals that Hardy shifted from their final resting place:

‘We late-lamented, resting here,
Are mixed to human jam,
And each to each complains in fear,
I know not which I am!

‘Where we are huddled none can trace,
And if our names remain,
They pave some porch or place,
Where we have never lain.’

Hardy placed the headstones around an ash tree, which became known as the Hardy Tree. Over 150 years, as if to prevent further disturbance, the trunk has grown protectively over the stones. 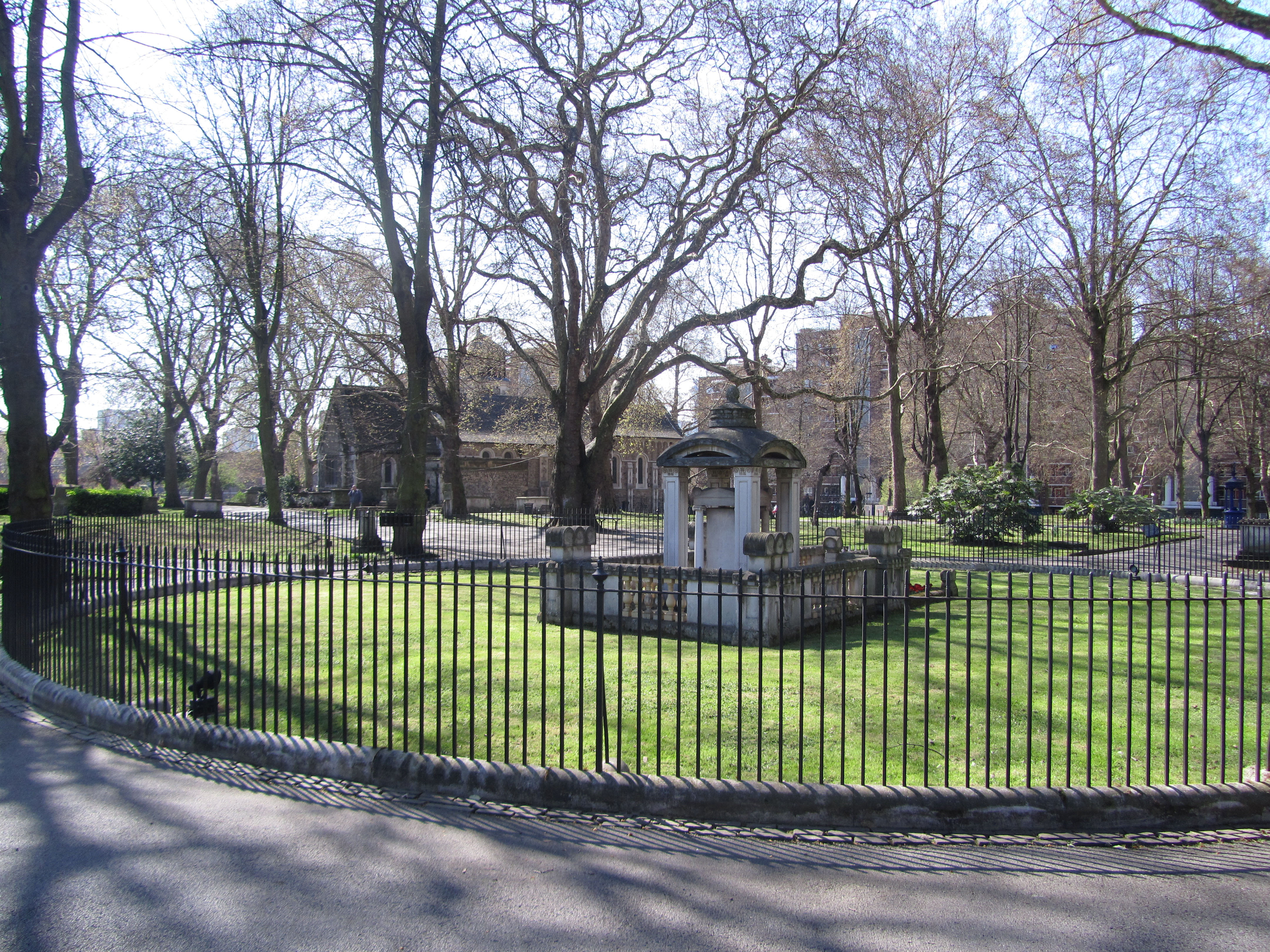 One body that did remain in situ was that of celebrated architect Sir John Soane. His mausoleum, which is one of only two Grade 1 listed monuments in London, (the other being Karl Marx’s tomb),
was Sir Giles Gilbert Scott’s inspiration for the red telephone box. 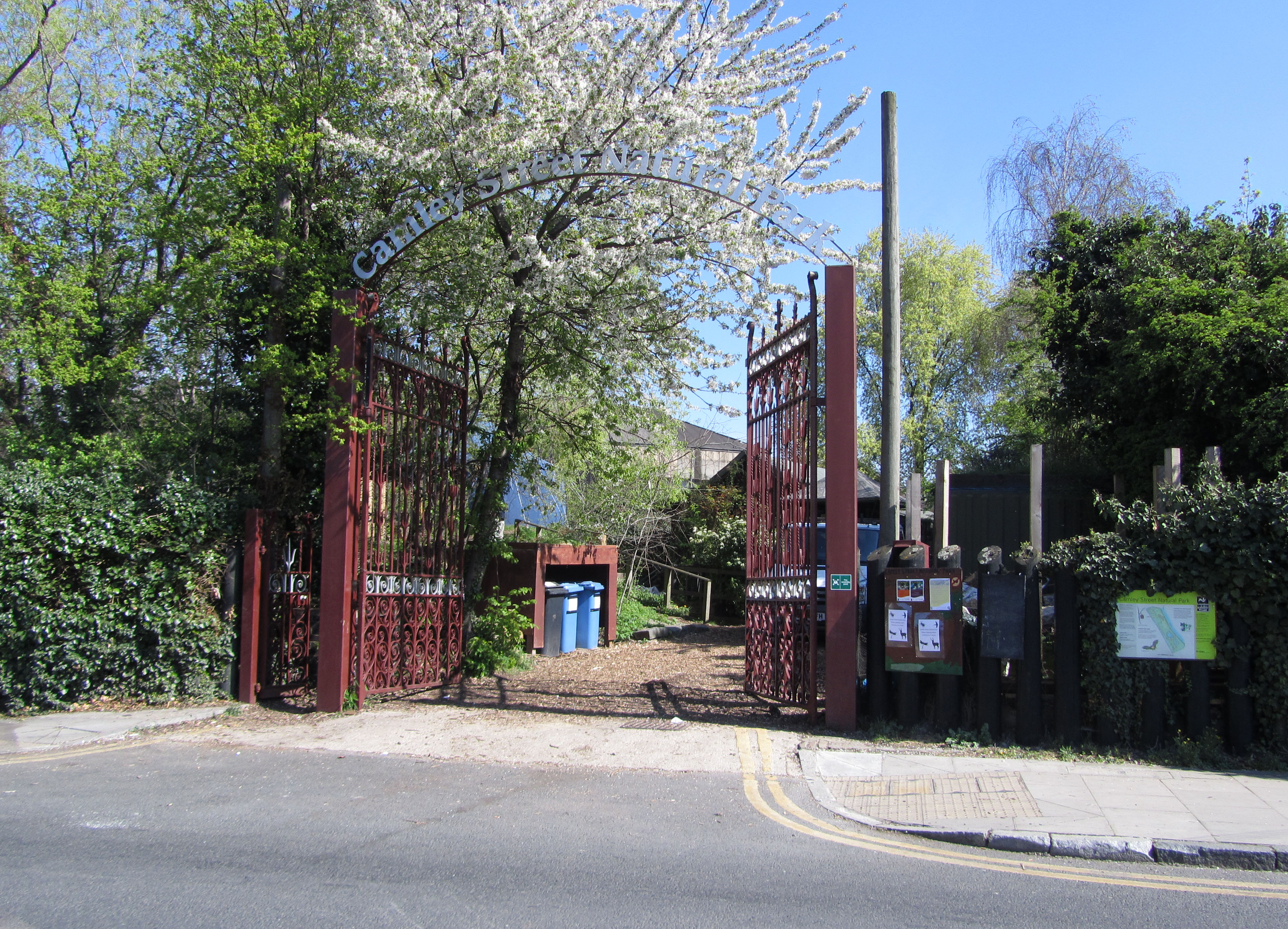 Across the tracks is Camley Street Natural Park.

(Label 4) A small but thriving green space on the site of a former coal yard, Camley Street is a lovely oasis at the heart of the renovated King’s Cross. London Wildlife Trust’s Flagship Reserve, it hosts pond-dipping and nature-watching sessions for children and its wood-cabin visitor centre is used by the Wildlife Watch Club. 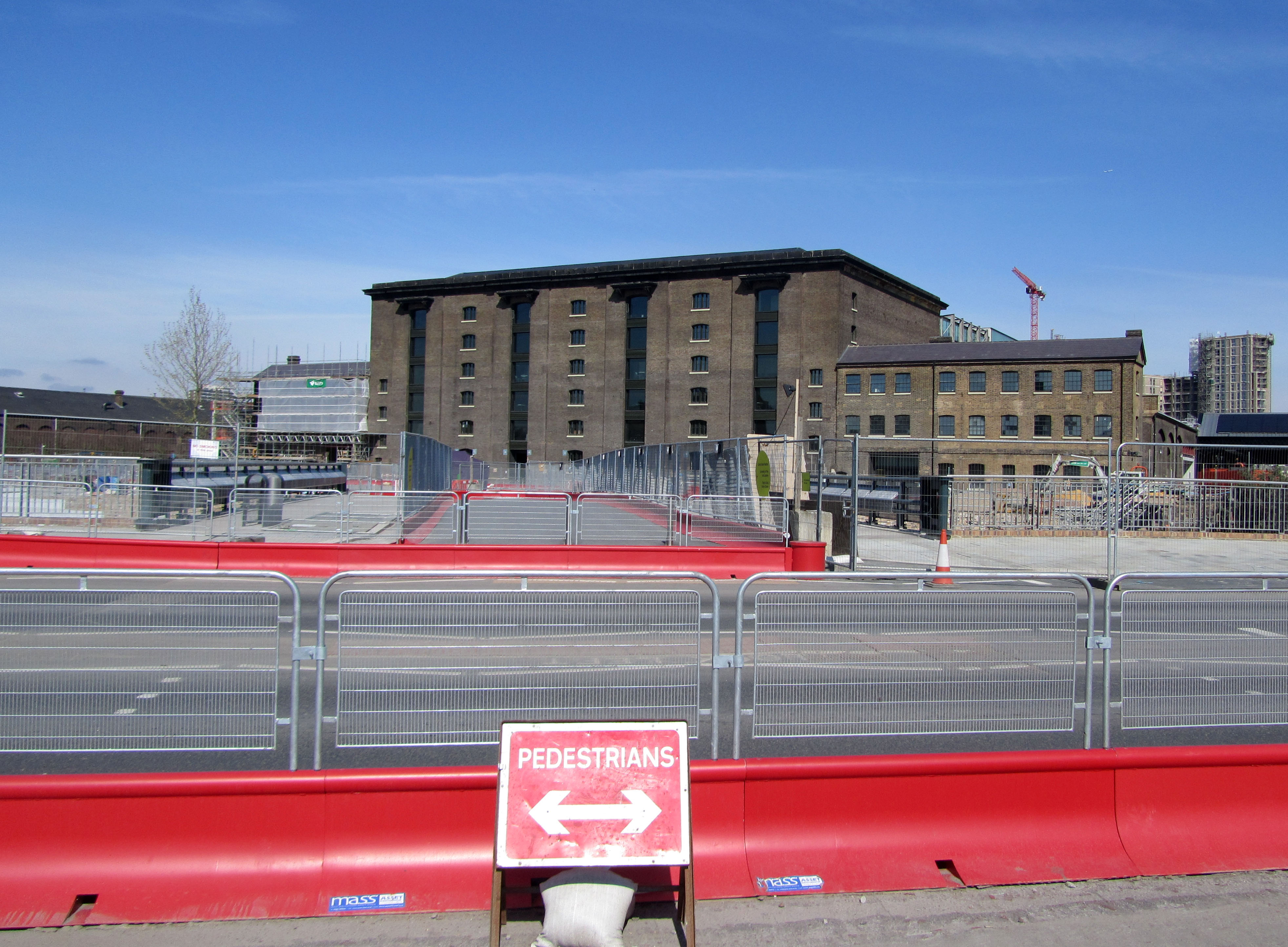 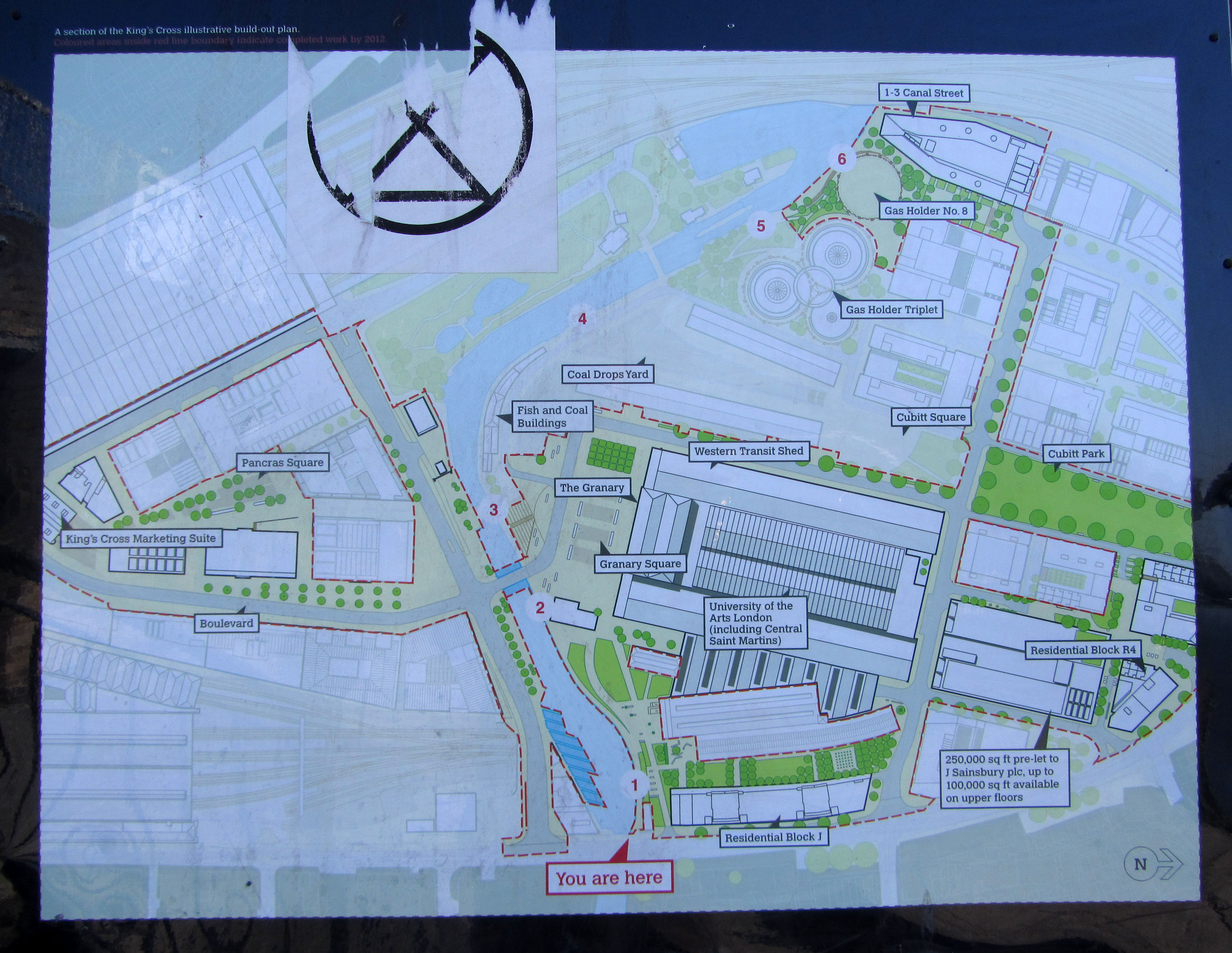 This map is on the towpath of the Regent’s Canal just below the York Way road bridge and just before Kings Place. 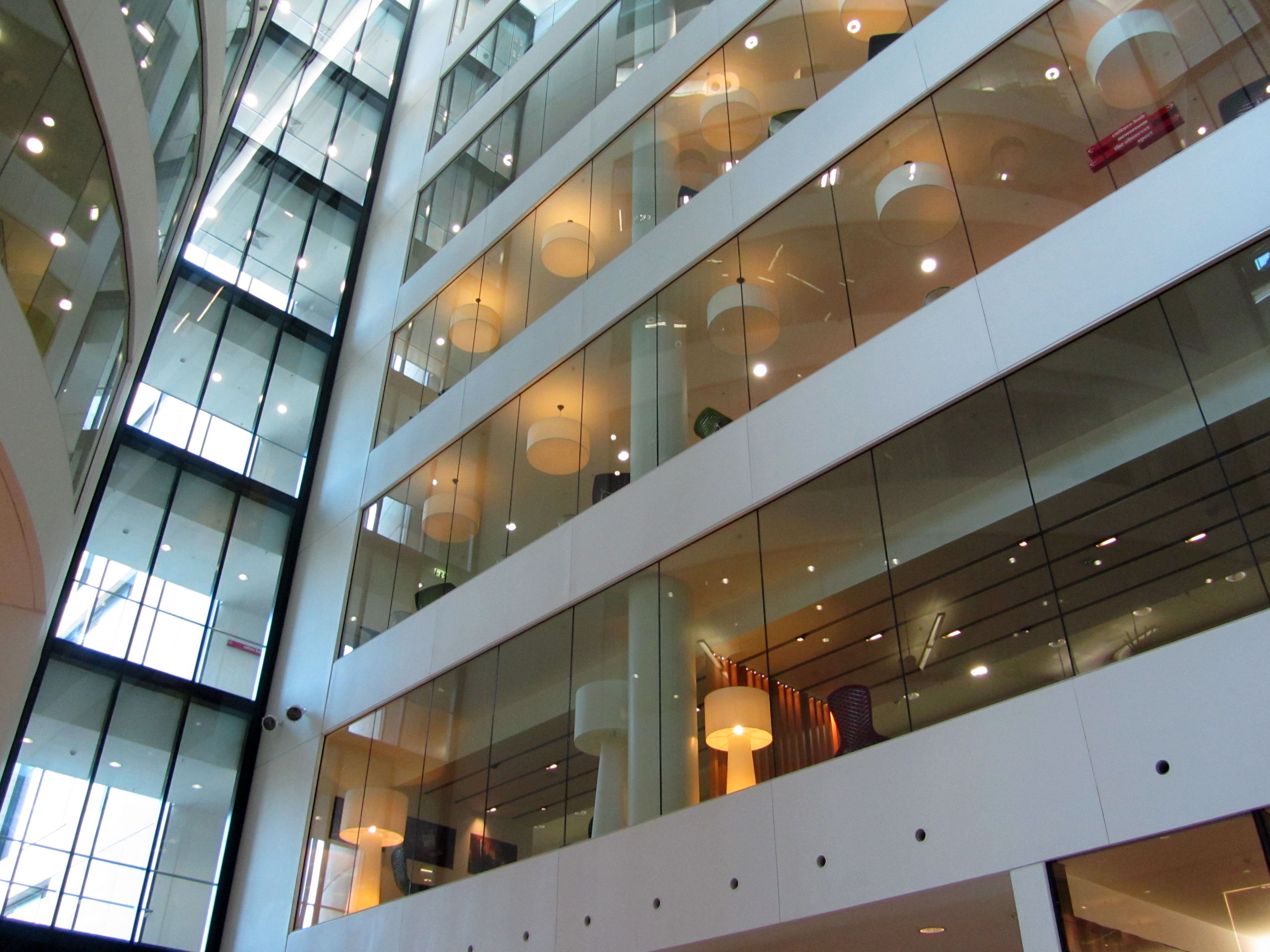 Kings Place is home to The Guardian, Network Rail, Logica, Pangolin London, the Orchestra of the Age of Enlightenment as well as being a venue for music and art. When I was there it was hosting an exhibition by abstract critical. 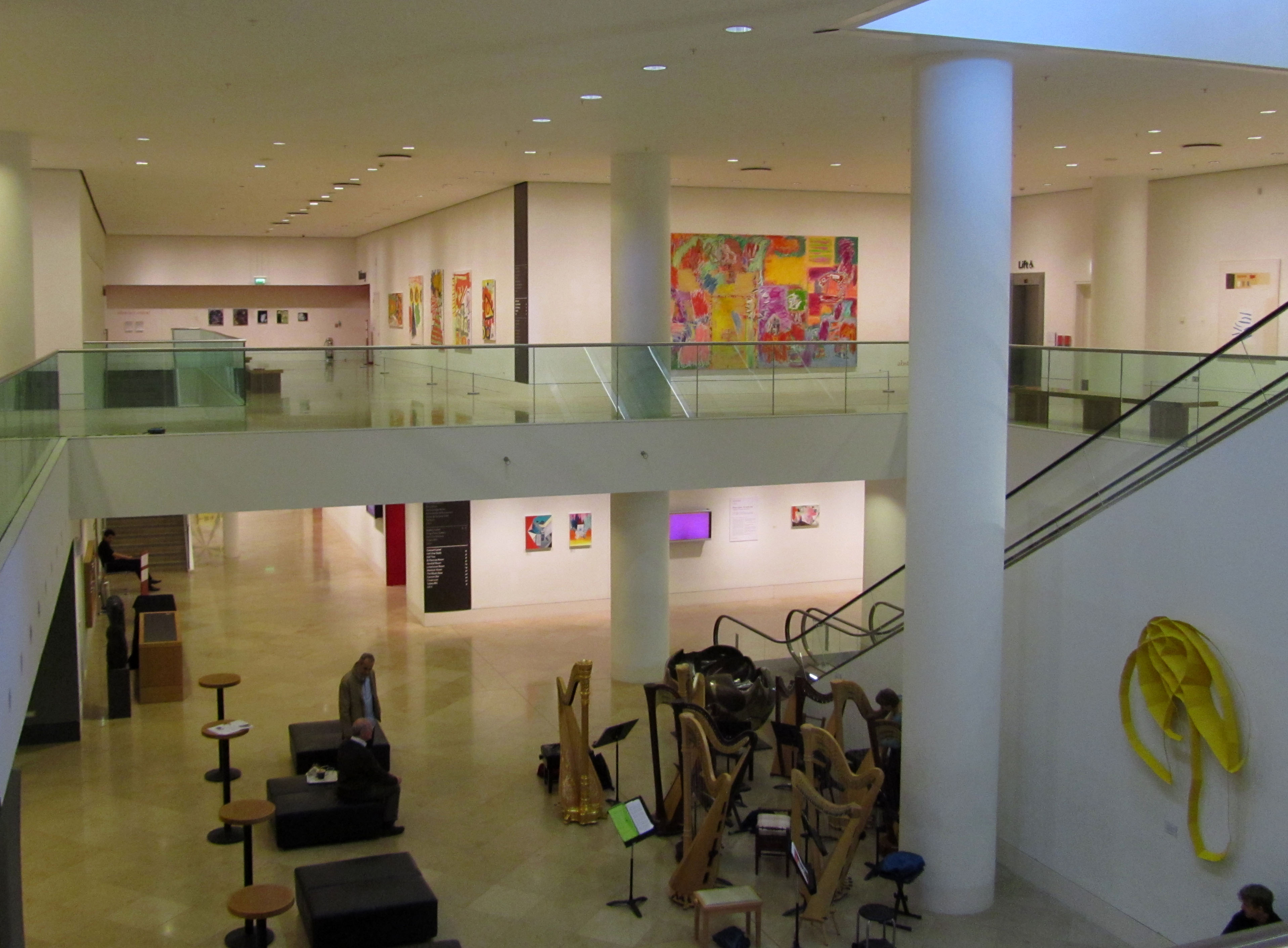 The main concert venue is Hall One. The interior surfaces, the wall panels, columns, roof coffers, seat backs, doors and desks, are all made with an acre of veneer taken from one single tree, a 500 year old German oak from the Black Forest. 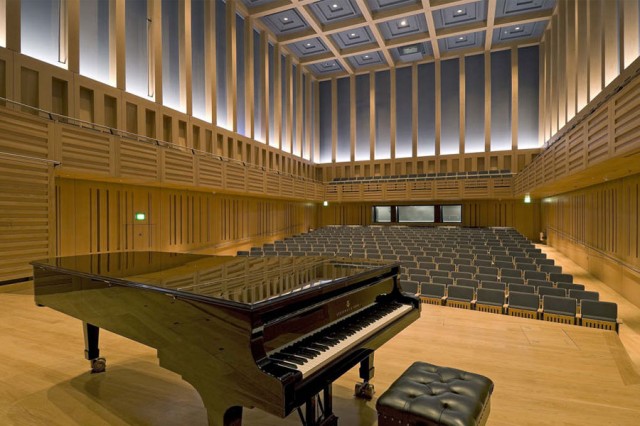 Sourcing this timber was described by Tom Service in the Guardian:

…an encounter with a way of life that you would have thought had vanished hundreds of years ago; something straight out of a Brothers Grimm fairytale. He went to visit the elders of the village where the tree had come from, and met the representative who negotiated the sale of the tree. Out of the forest emerged a tiny man with a long grey beard, wearing a grey velvet coat and hat. Their oak had still more musico-mythic resonances: such was its importance for the villagers that it was given a name, the Contessa, an appropriately Mozartian title, and was felled at an auspicious time in the lunar cycle, during the full moon of Christmas 2005.

The tree had grown in an ancient hunting forest that now belongs to the local community. There is no formal replanting system: the tree is felled and where the acorns have fallen the forest reseeds. The woodsmen were very keen for the veneer to be used for a major architectural project and sold in a single lot. The tree was tall, with few side branches, so it had very good grain. After felling, the timber was cut into 5 metre lengths, boiled for one week in a water bath, and then sliced with a 5 metre blade. 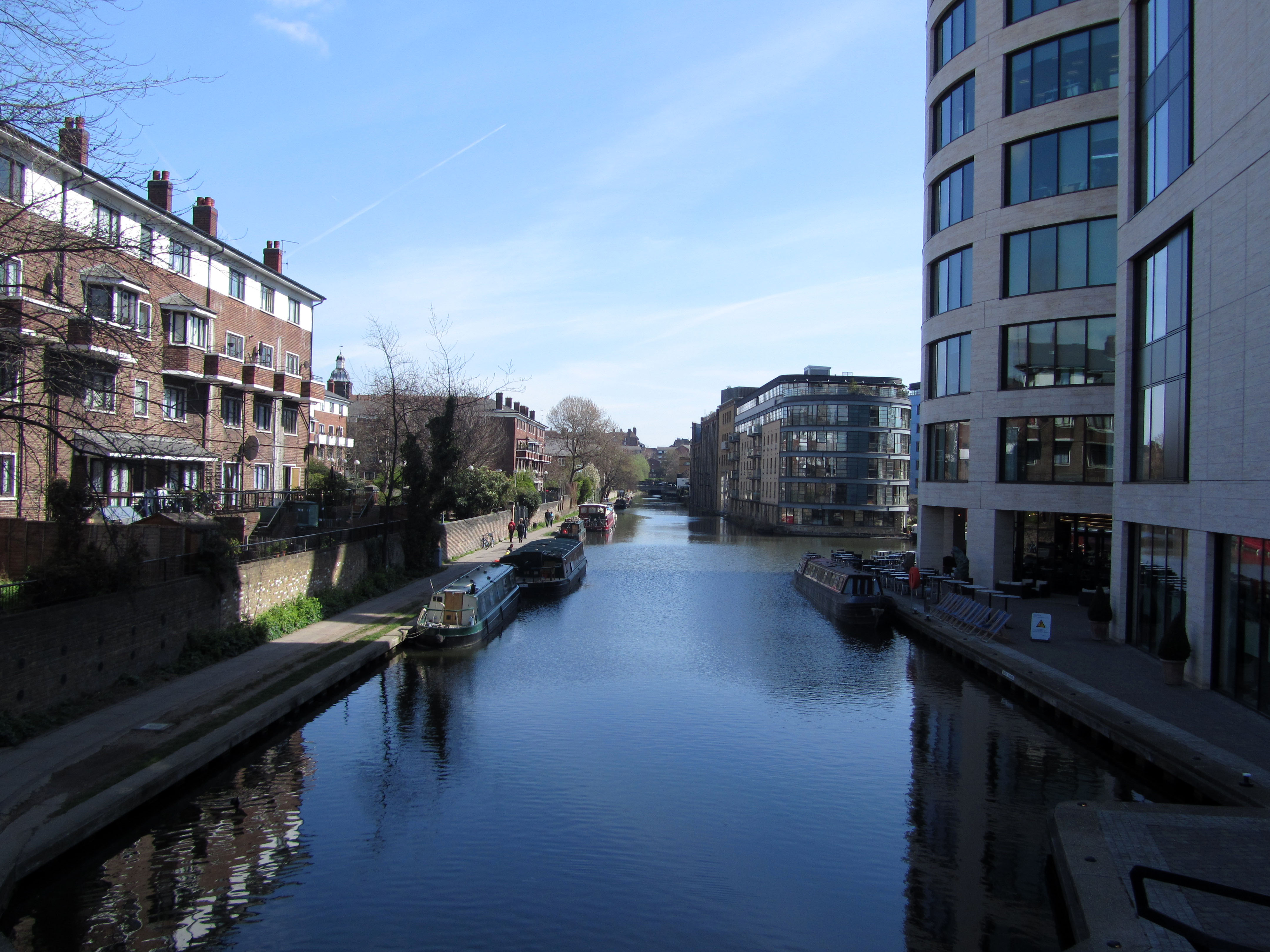 Kings Place, here on the right, beside the Regent’s Canal and Battlebridge Basin, site of the London Canal Museum. 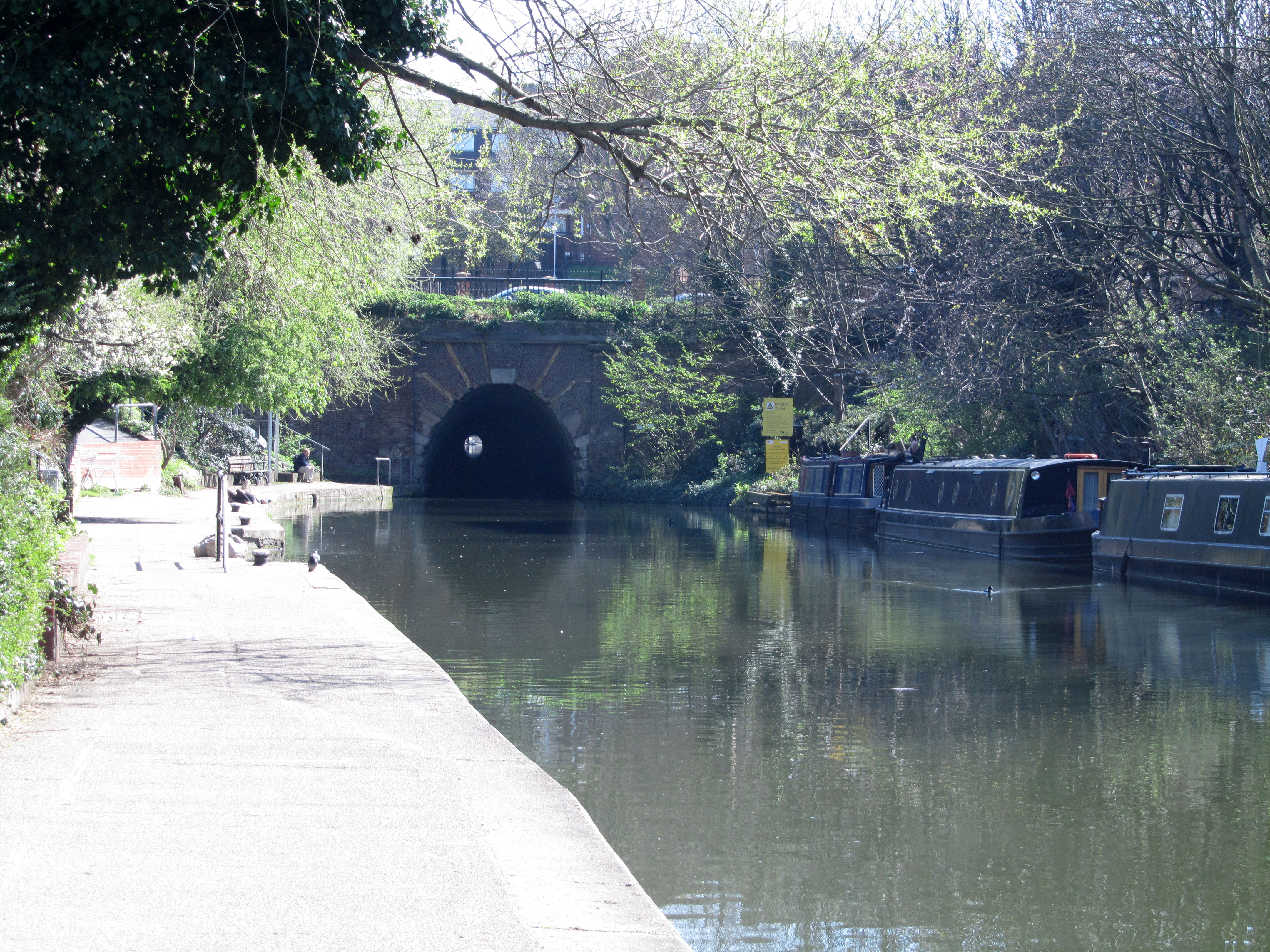 Further east along the canal, beyond Caledonian Road, is the Islington Tunnel. Here the towpath is interrupted, so the route ahead is either via a passing boat or over the top. Carnegie Street then alongside Vittoria Primary School, Chapel Market, Liverpool Road, cross over Upper Street and down Duncan Street. 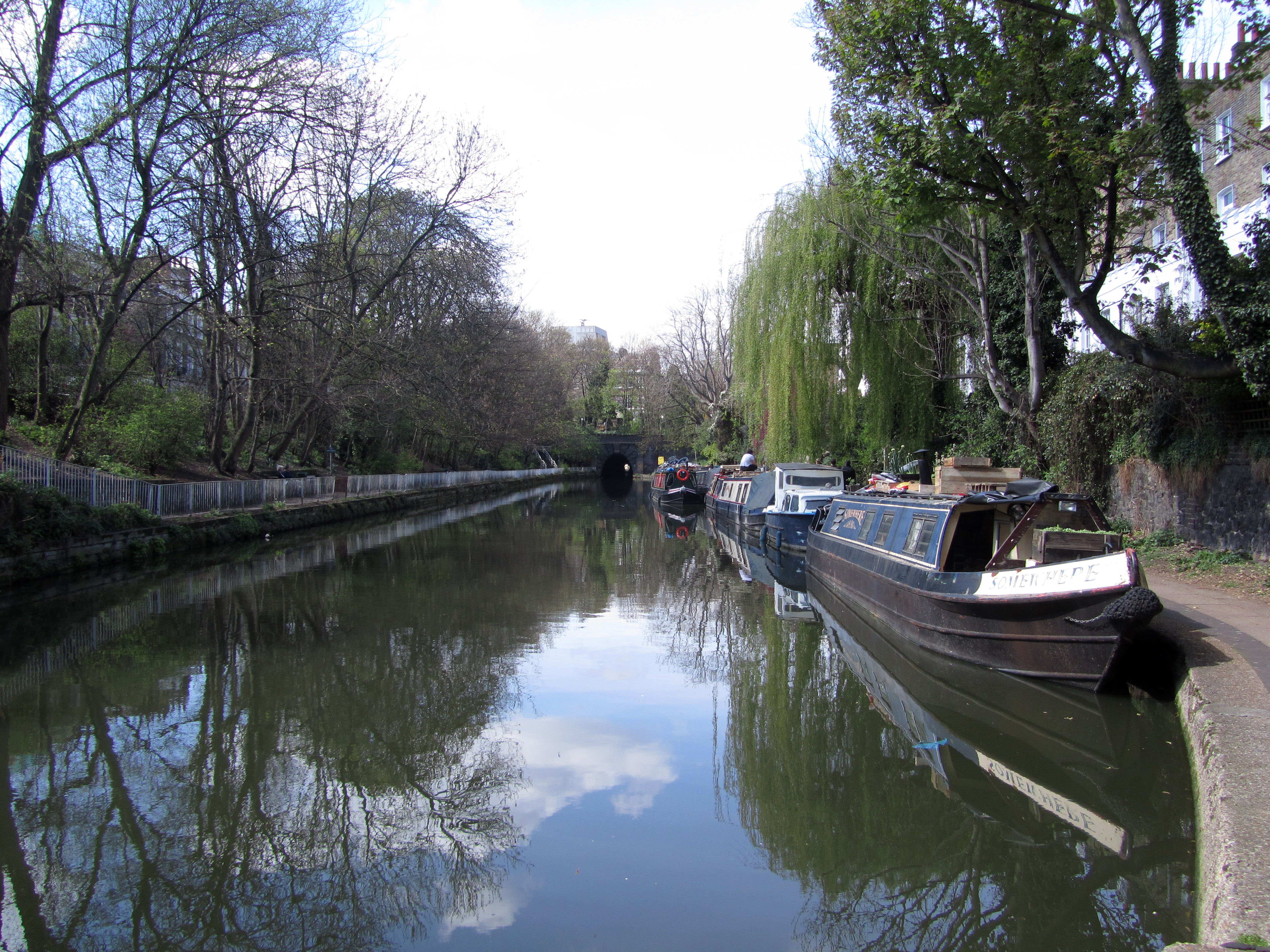 The canal reappears below Colebrooke Row. Alongside here is Duncan Terrace Gardens and in amongst all the other trees and shrubs is a very special Tree of Heaven. 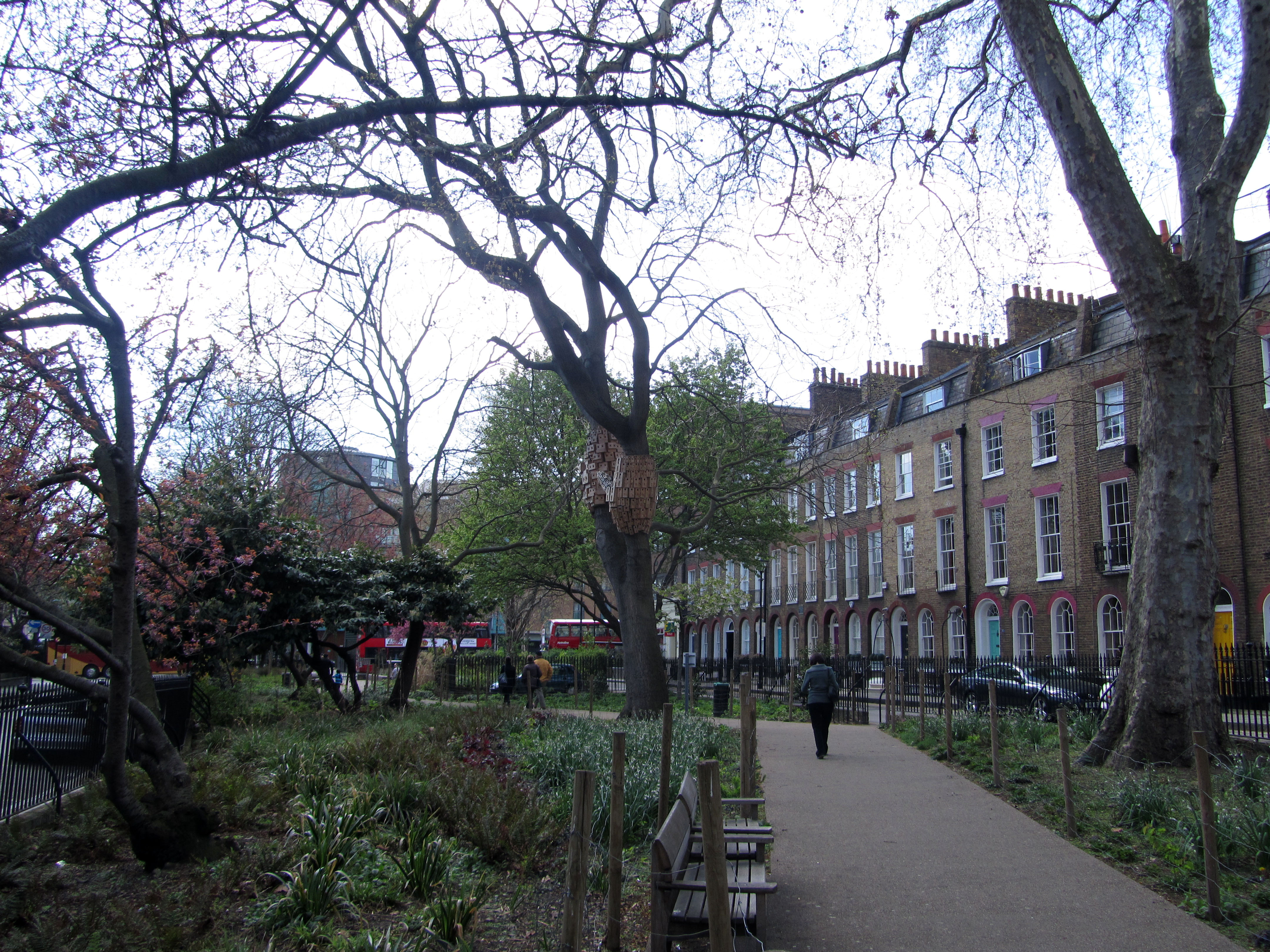 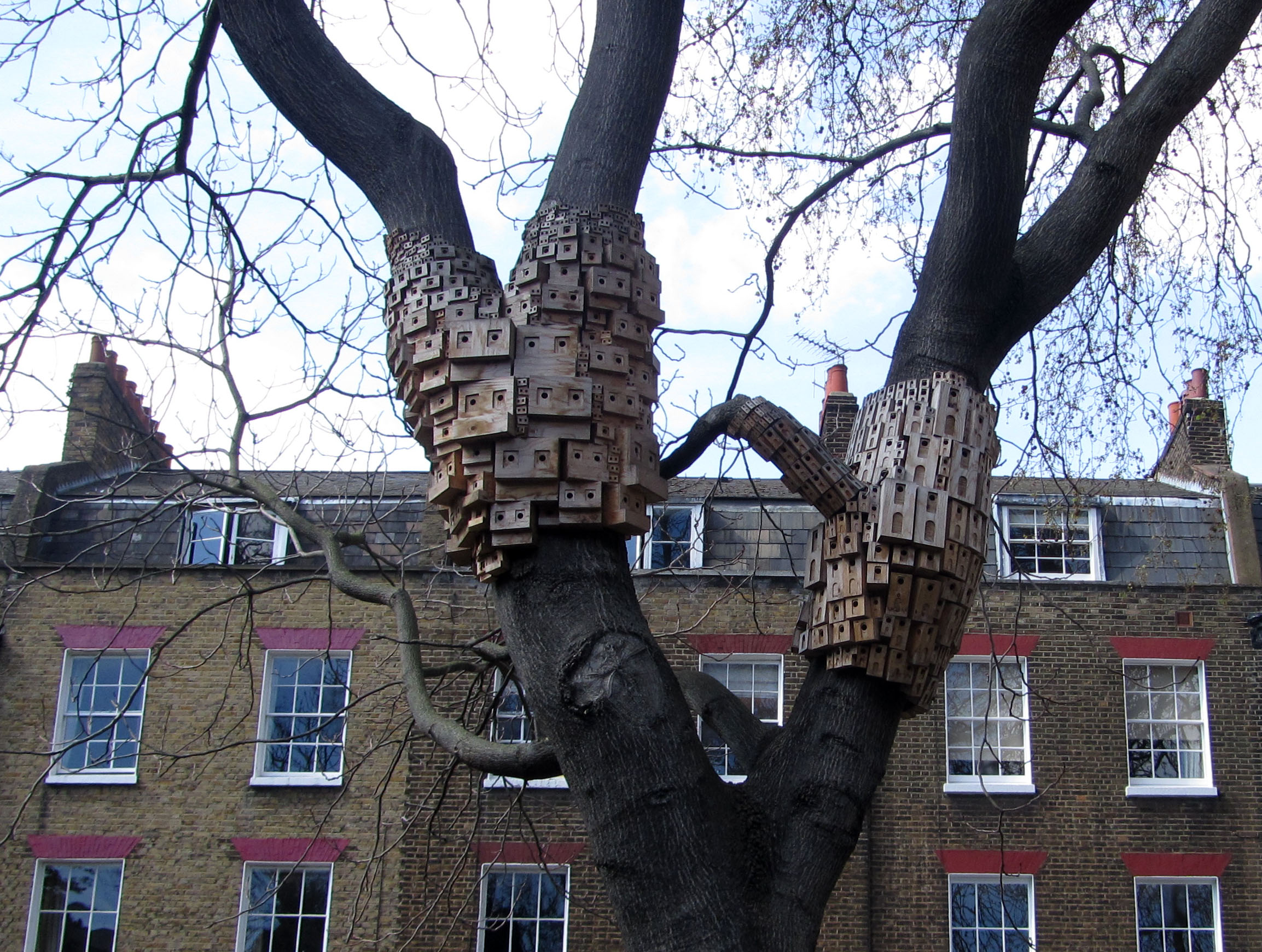 This is one of a series of Secret Garden Projects across London. See more here.

A short walk down Elia Street on the corner of Quick Street is a very good place for lunch. 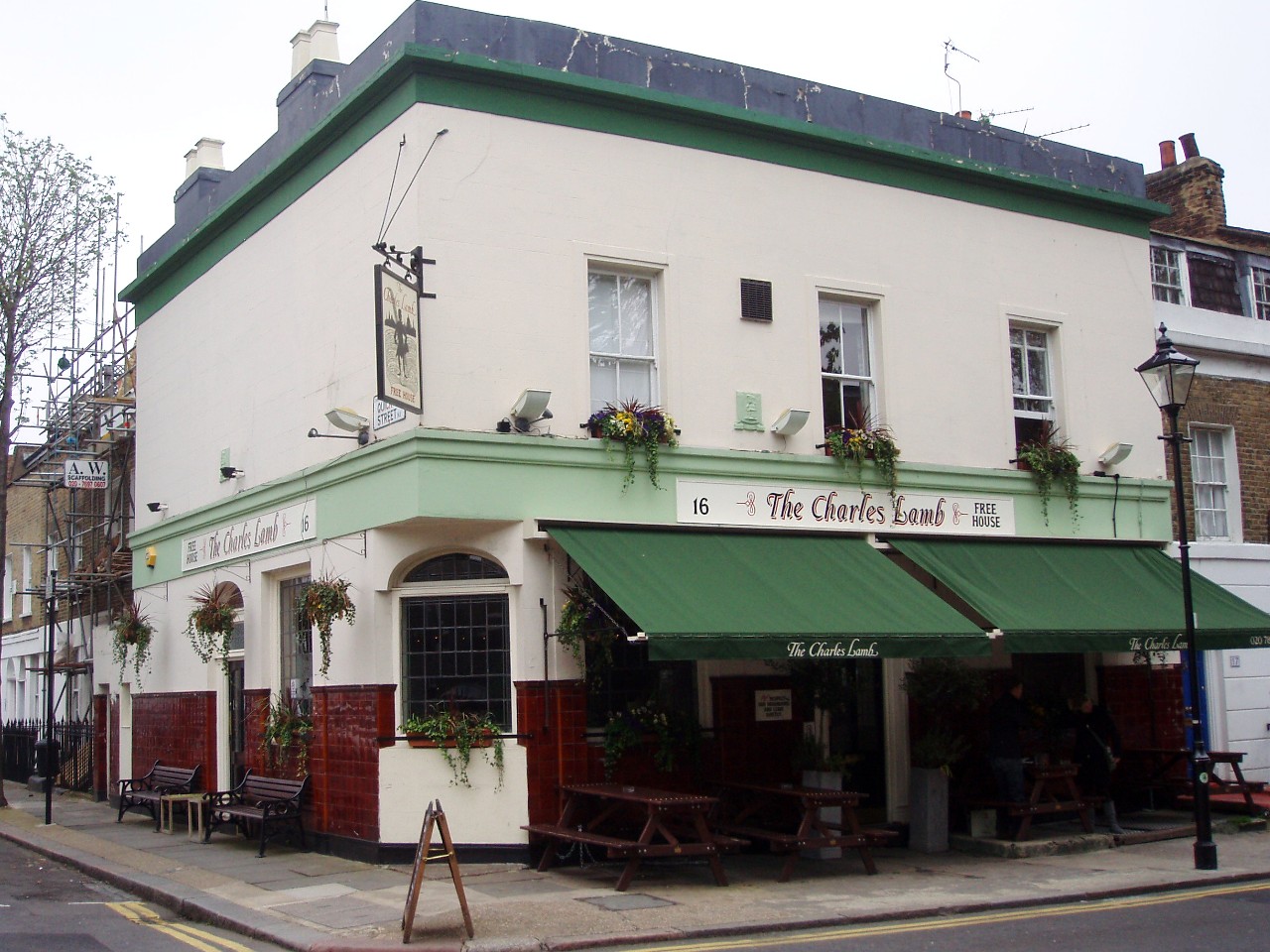 (Label 6) Charles Lamb. 1775-1834. Essayist & Poet. Associated with the romantics, Shelley, Hazlitt, Coleridge and Wordsworth and considered by admirers as “a pre-Victorian sugar daddy distributing kisses and kindliness”. Whilst living at Colebrook Cottage on Colebrook Row, Lamb was contributing to the London Magazine under the pen name ‘Elia’.

“I always arrive late at the office but I make up for it by leaving early.” 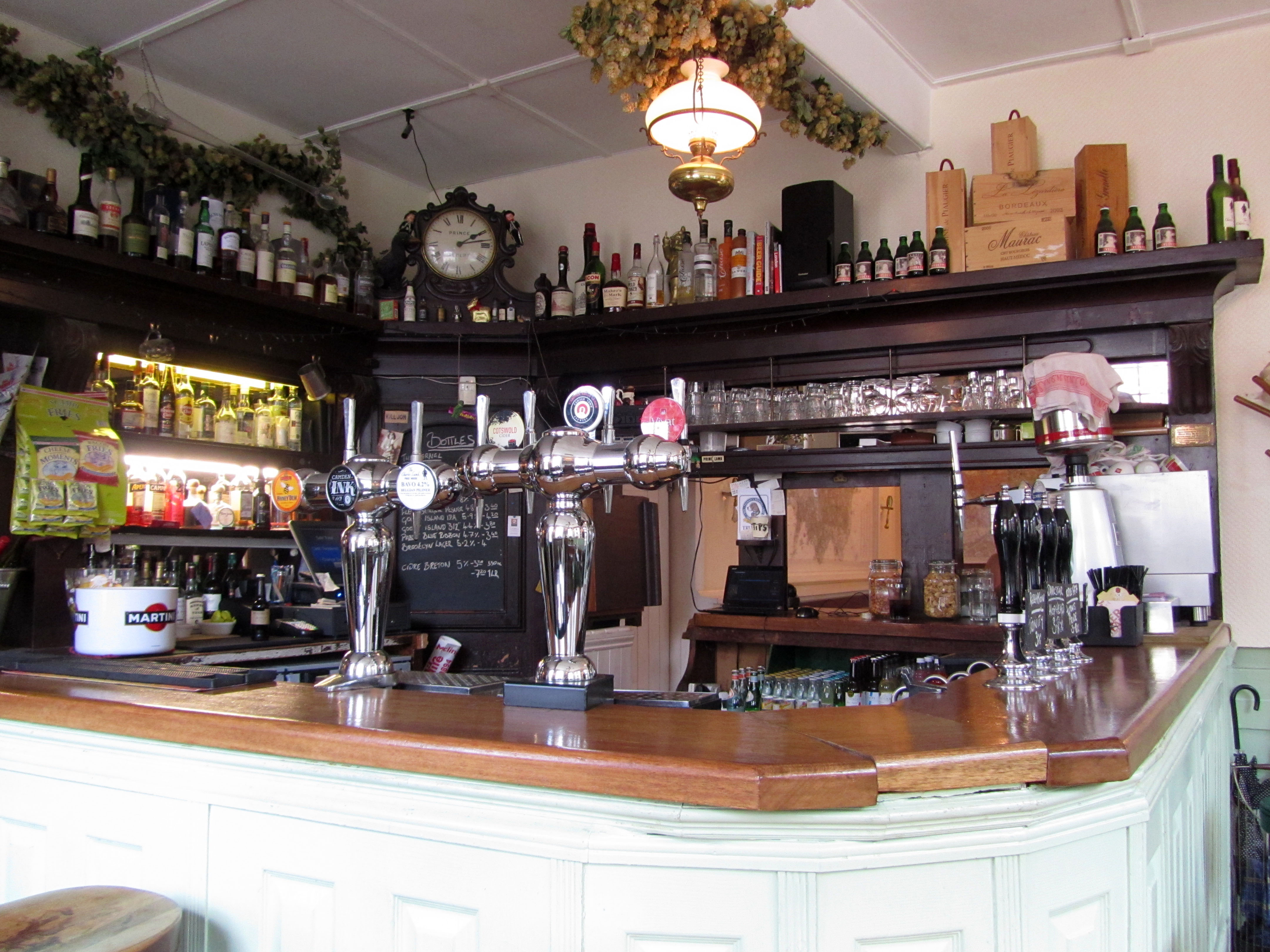 The Charles Lamb pub has a great selection of ales and old world wines, together with good home-cooked food. I had a delicious plate of chorizo & morcilla on toast with soft-boiled egg and waxy potatoes. 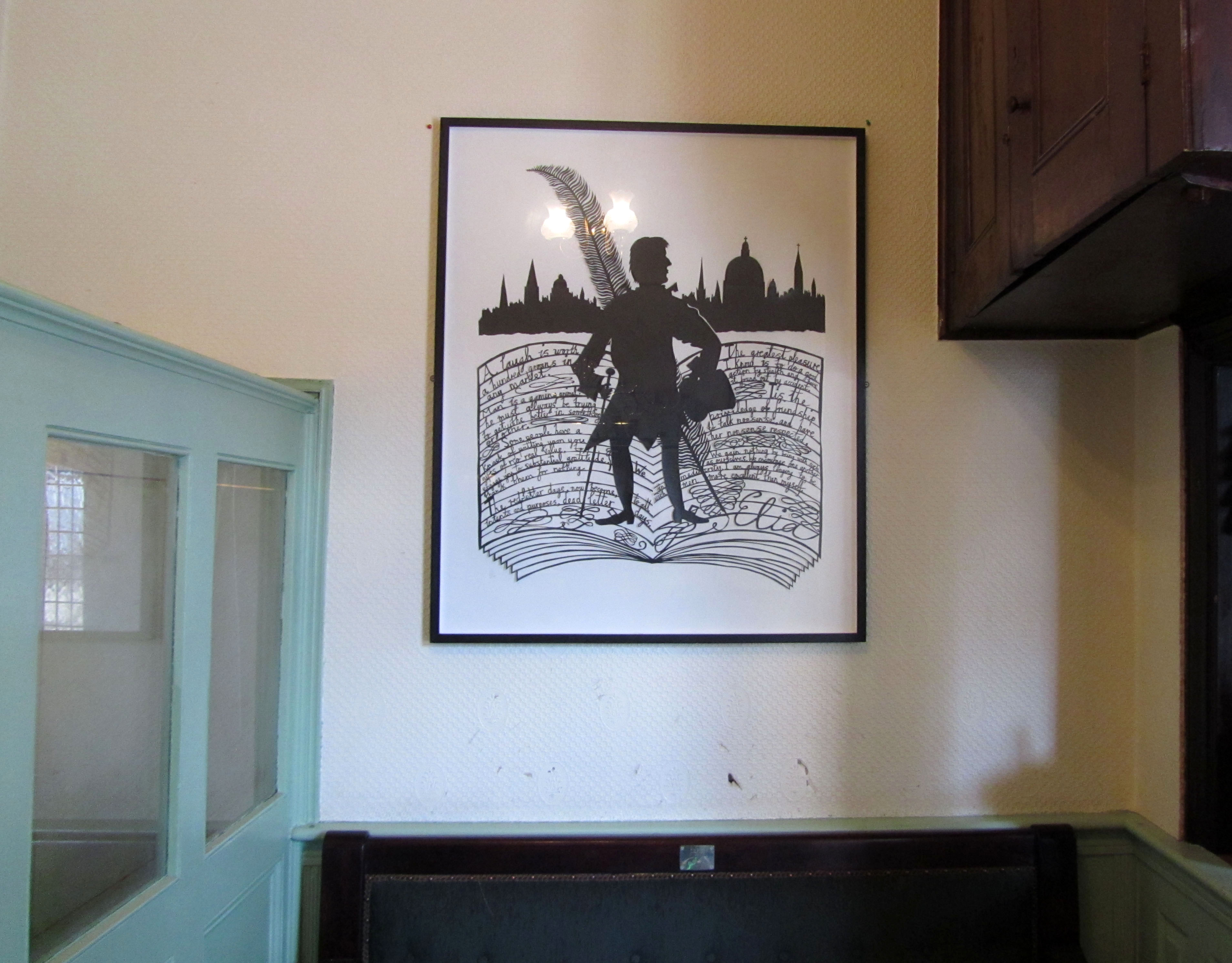 The pub sign was designed by Rob Ryan from this paper cut-out portrait of Charles Lamb. Other pieces by Ryan can be seen around the walls, alongside a painting by Nick Botting of the pub on Bastille Day, with a game of pétanque outside in the street. 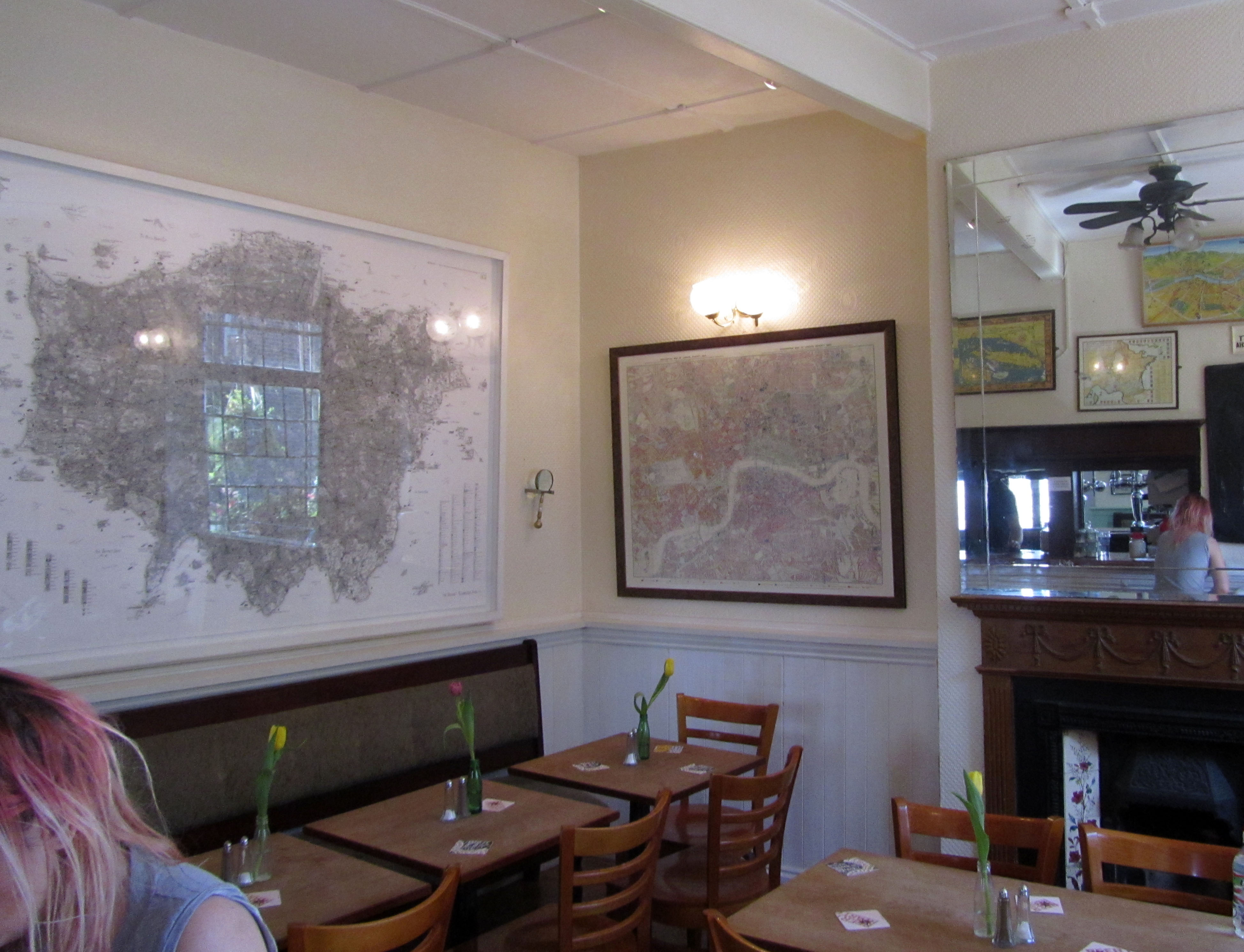 The walls of the dining room are hung with a wonderful selection of maps, the largest being Stephen Walter’s The Island, where he has drawn London as an island crammed with typographic descriptions of familiar places. It is so densely worked that magnifying glasses are provided for closer examination. You can see an interactive version here. 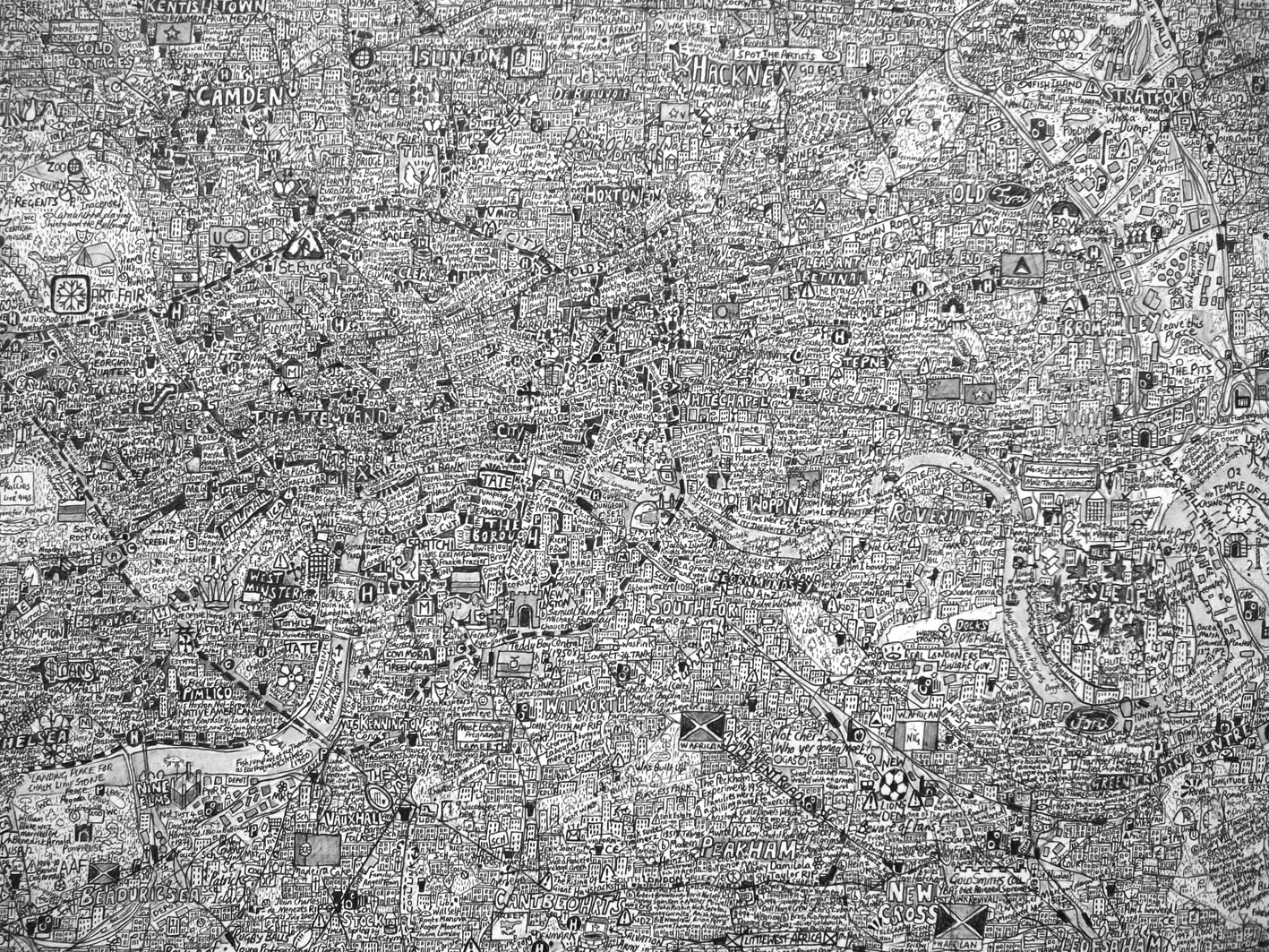 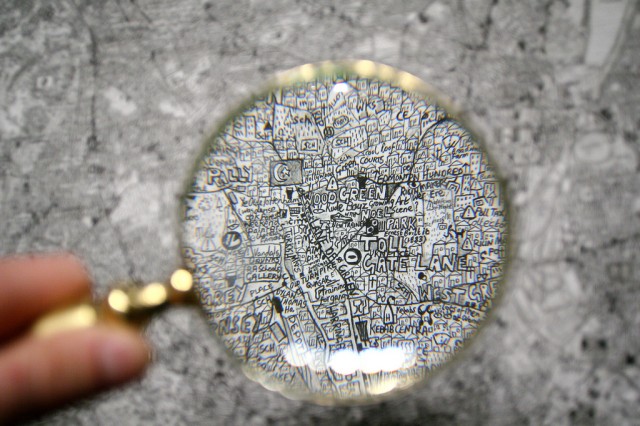 PS: There was a follow-up to this post when I returned 7 months later to check up on the Hardy Ash?

4 thoughts on “A Walk From King’s Cross (With Labels)”