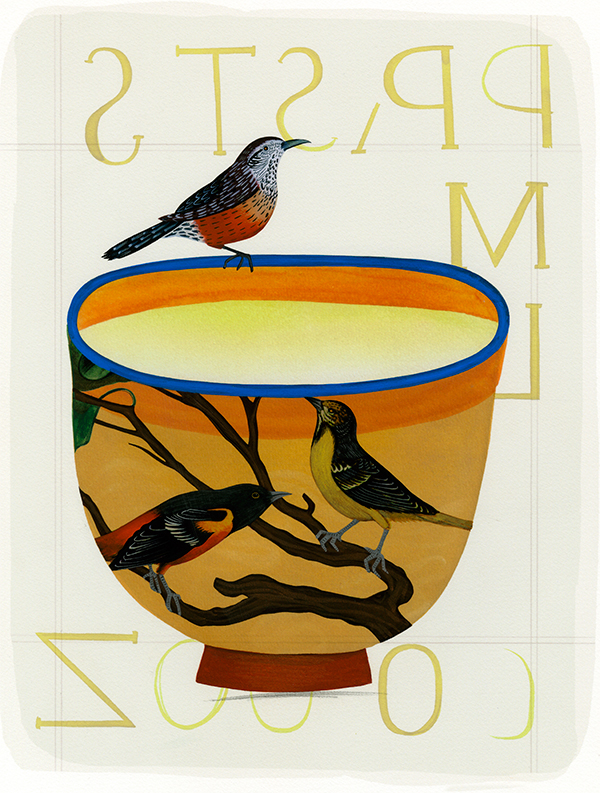 Long ago I made cups, real ones out of porcelain to be exact. And now I don’t do that anymore. Instead, I often paint pictures of cups. It began innocently enough, as a path for transposing the ceramic cups that had always inspired my pottery into paintings. This simple idea launched an obsession and soon my desire to paint cups got a little bit out of hand. Because I had so many different ideas, I began numbering them in an effort to hold it all together. 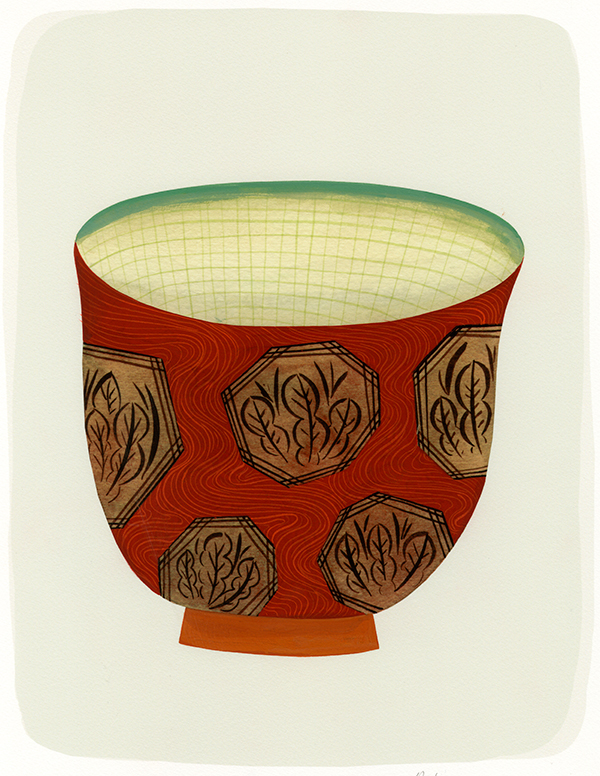 “But why the cups?” you may ask. This is a reasonable question, one that I revisit all the time.

Making the porcelain cups just happened. I started doing it for fun and ended up taking the whole thing quite seriously. For those who are not familiar with the realm of pottery making, it is a vast universe unto itself, rich in history, beauty and tradition. When one makes things out of clay, delving into this knowledge is unavoidable. People loved the cups I made. I didn’t really think about it too much. I was told that they were beautiful. Over time the demand for my cups increased and I responded by cranking them out like a demon. Long hours of hard labour eventually eroded my enjoyment of working with clay. The repetition of making millions of cups became tiresome. My back hurt and I no longer wanted to mix nasty chemicals into glazes or haul lumpen bags of clay. 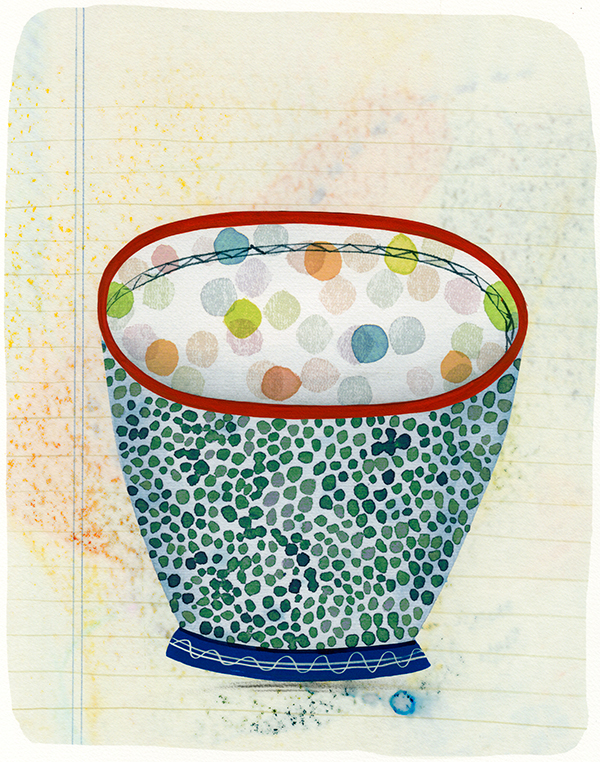 To be honest, I needed a change. I decided to go back to art school and pursue a graduate degree, hoping to revive my spirit. Well, that turned out to be a colossal mistake! Build-destruct, deconstruct-reconstruct, discuss-rebuild-obliterate… Graduate school left me with a massive skull-splitting migraine that blocked my vision for years to come. Afterwards I never wanted to see another cup for as long as I lived. I needed to break free from the tyranny of it all, to feel the air on my face and get away from that mouldering ceramics studio. I was deeply unhappy. 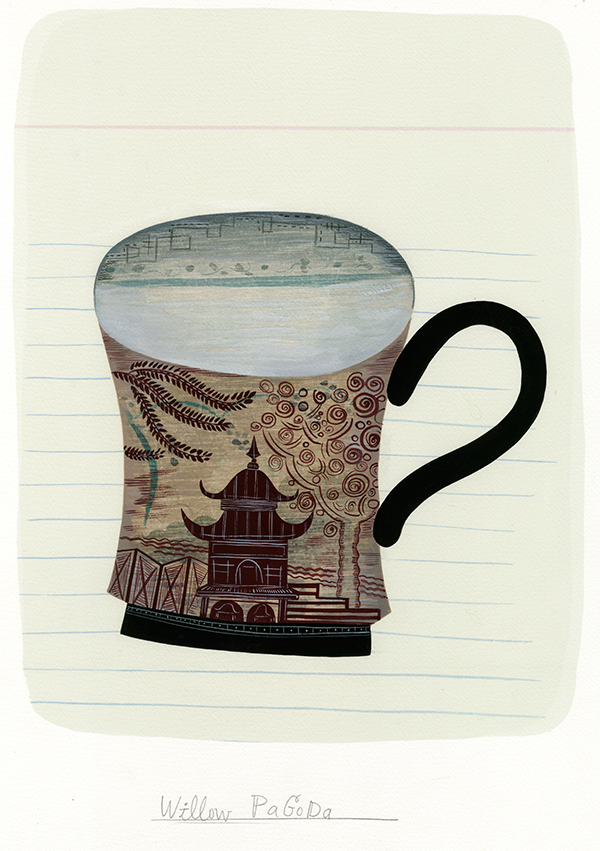 Wouldn’t you know it? In spite of my snarky mood people were still clamouring for those damn cups but I didn’t enjoy making them anymore. Distressed, I finally asked myself the obvious question: “What do you want to do more than anything else in the whole wide world?” And then it became clear. After a bit of wrangling, I packed my bags, headed off to Paris and began painting little gouaches in an atelier overlooking the Seine – I’m not kidding! Of course it was lovely and fun. A revelation, in fact. When I returned home several months later, I was astonished to find that none of my problems had disappeared, such as I had hoped. I kept the cup enterprise going for a little while longer but I already knew that my days of pottery making were on the wane. 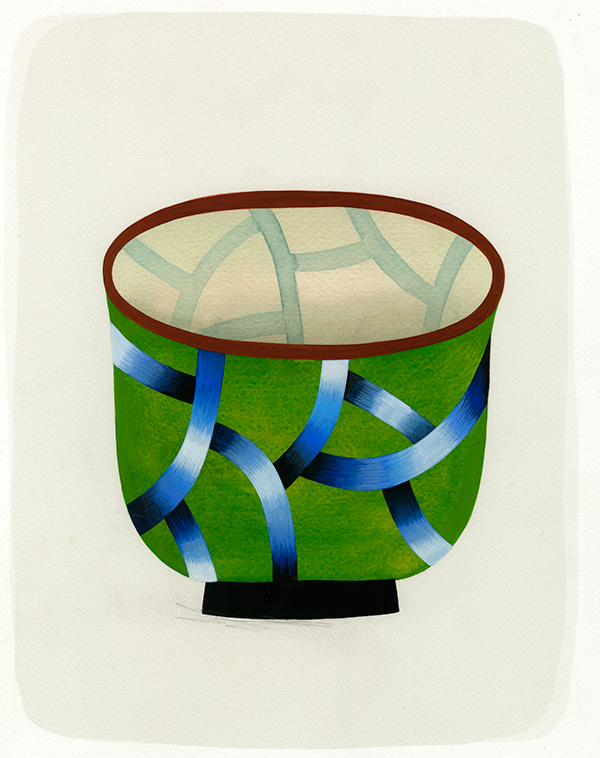 Things changed, events happened and I ended up teaching ceramics at a fancy school for teenagers who were much too smart for their own good. They loved making pottery. It helped them forget about physics, history, and the mounting pressures of getting into Harvard. I loved teaching and without realizing it, my students ended up helping me enormously. Working with them reminded me about the unmitigated joy I felt when first making pottery as a teenager. The fancy school was an amazing place, but it was also insanely busy and I had zero time available to make my artwork, which became untenable. 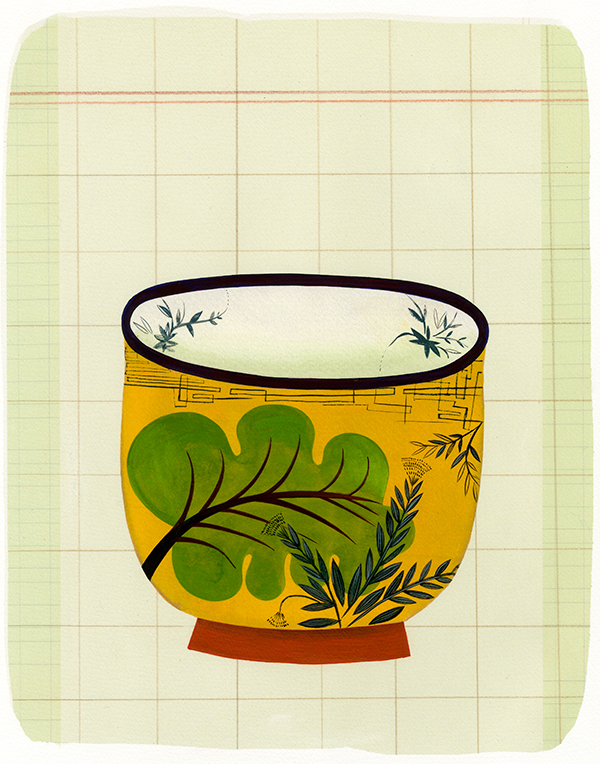 I soon met a handsome, wonderful man. We drank martinis and fell in love. He was based in London and eventually, for all kinds of reasons we decided to move there and that was the end of my teaching. It was not a bad thing to leave the fancy school, as it was clearly time to re-focus on my own work. That was when I decided to become an illustrator. I knew absolutely nothing about it but it seemed like a decent way to make a living. I landed my first job almost immediately and it was a really big one. I thought, “WOW, what a result!” 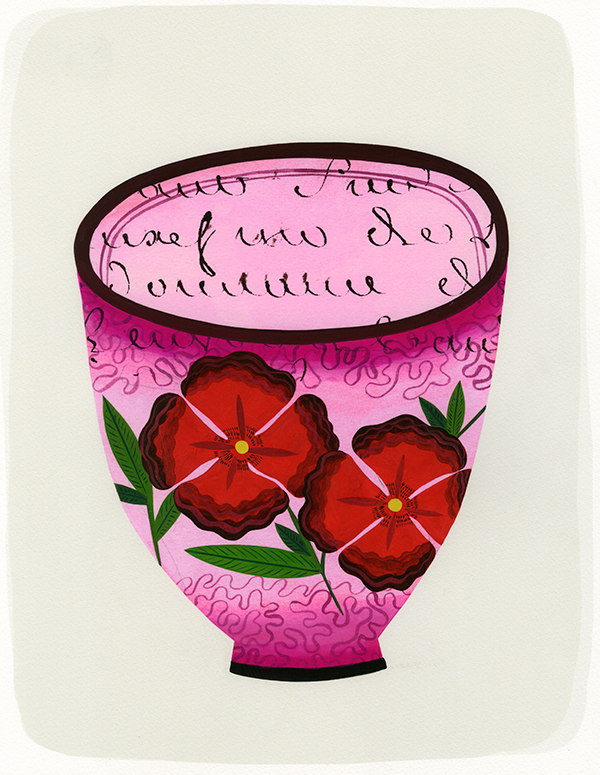 It came about when I told a good friend, who was an art director in New York, that I was now no longer a potter or a teacher, but an illustrator. He said, “Great, I can use you”, and hired me on the spot. He threw me into a room with a painter turned video editor. “To begin with I’ll need some squiggly hairdos.” 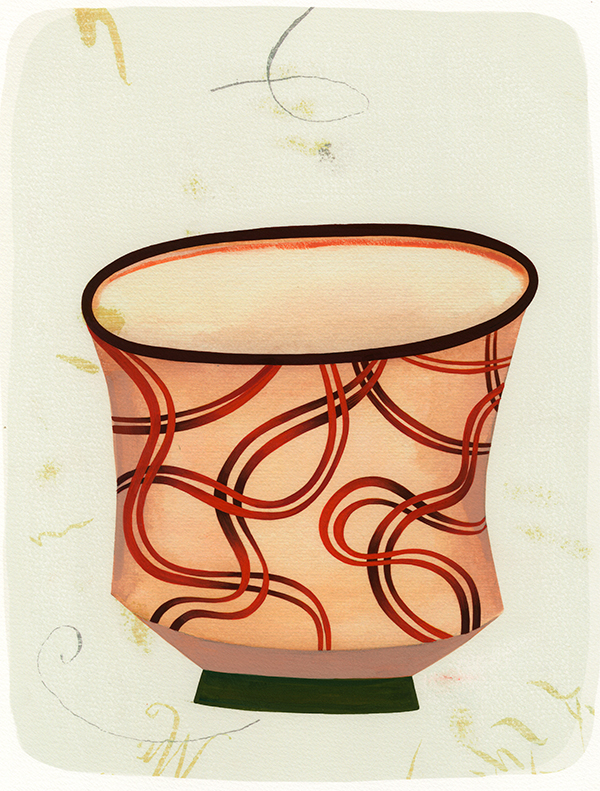 So I painted squiggly hairdos with abandon and handed them all over. The editor spliced my drawings into a charming, wacky animation that became a visual element for a TV station. I cannot tell you how much we laughed and joked as we worked our way through that project. I enthused, “I love illustration! Its just like painting but without all that ponderous ‘what’s it all about’ crap.” The editor had gone to art school and knew exactly what I meant. After finishing the project I left for the UK. 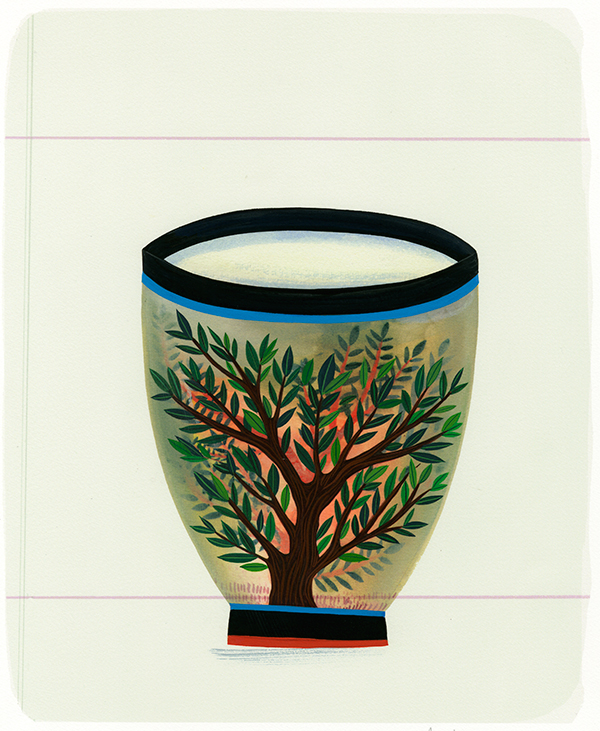 Arriving in London was a huge shock. You see, I hadn’t really thought through what it would actually be like. I had acted purely from the heart because I was in love. Picture it: alighting at Heathrow on a grim, sleety morning. Sleepless, with all the stuff of my life packed away in a storage locker back in Lawrence, Massachusetts. I suddenly worried that I had made a rash decision. One never knows. It did all come together in time, but not without difficulty. I found a studio, made some friends, and basically got on with it, which is what one does in England, I soon learned. 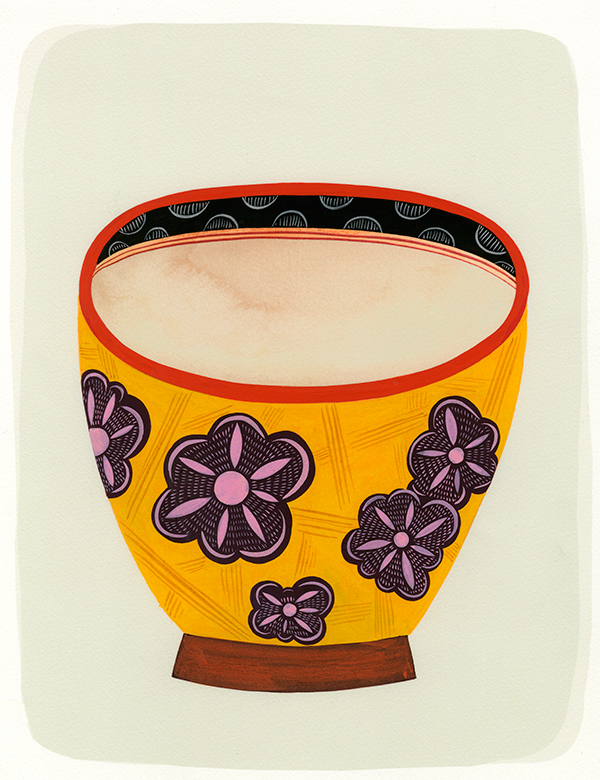 I began “illustrating” taking cues from my clients, rather cluelessly, and concentrated on enjoying the process. Eventually, I learned what I needed to know about my new profession, albeit in a bumbling side-step manner. 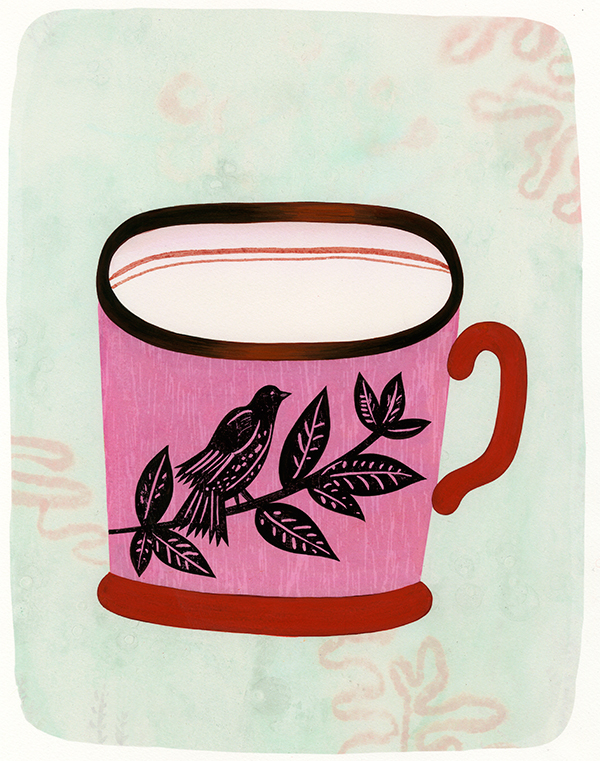 The cups. I hate to admit this but I actually began to miss them. There was something about living in England, poring through the V&A ceramics collection, and finding oddball variations of Blue Willow on Portobello Road. My art director friend had lately been trawling e-bay and soon his tiny apartment on Park Avenue South was chock-a-block with exquisite early Staffordshire pottery. He would send me pictures of all the wonderful, quirky pieces he’d bought. I became jealous, wishing that I had made them. Even though those pots were over 200 years old, I could feel them in my bones, how they were thrown on the wheel, sprigged, painted and glazed. But you know, I had renounced all of that and quite happily too. Yet, I wanted to make cups again somehow, only from a new place. 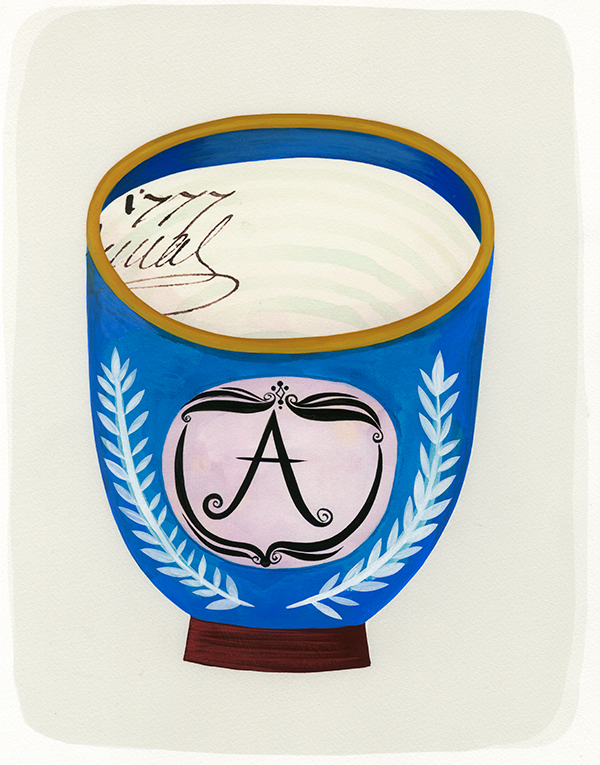