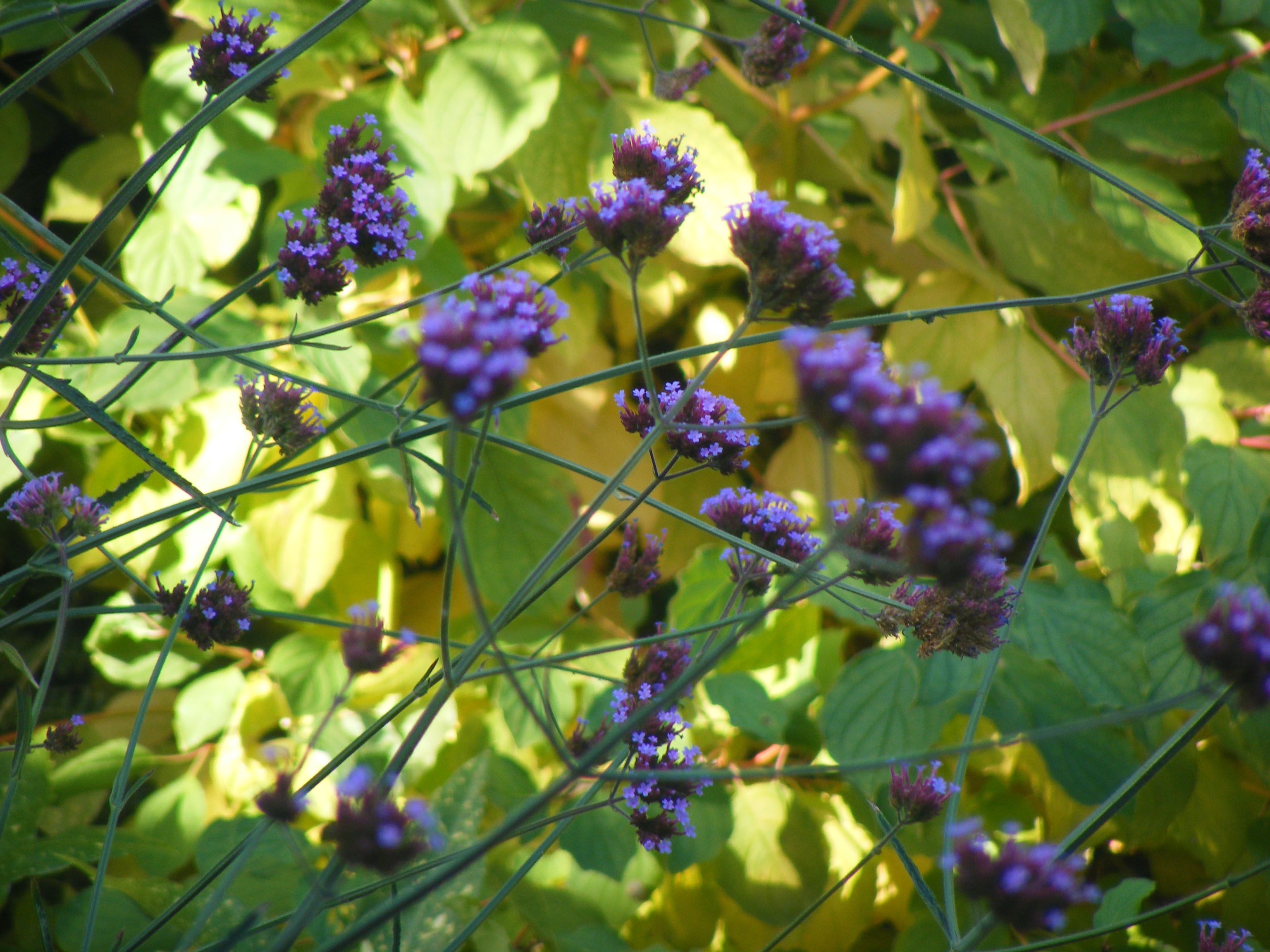 The last of the Verbena flowers set against a backdrop of yellowing cornus leaves. They will soon drop off to reveal bright red twiggy stems. 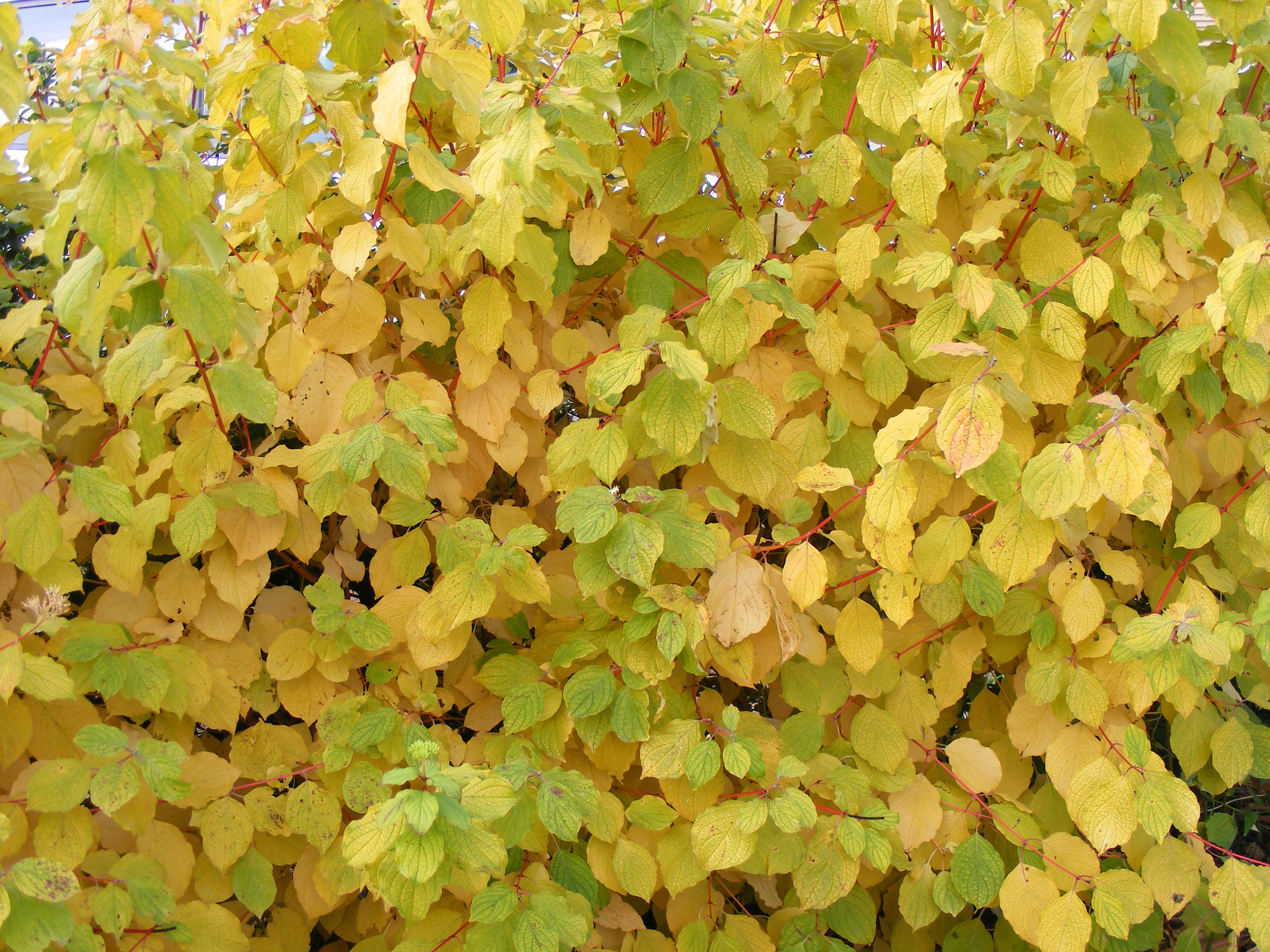 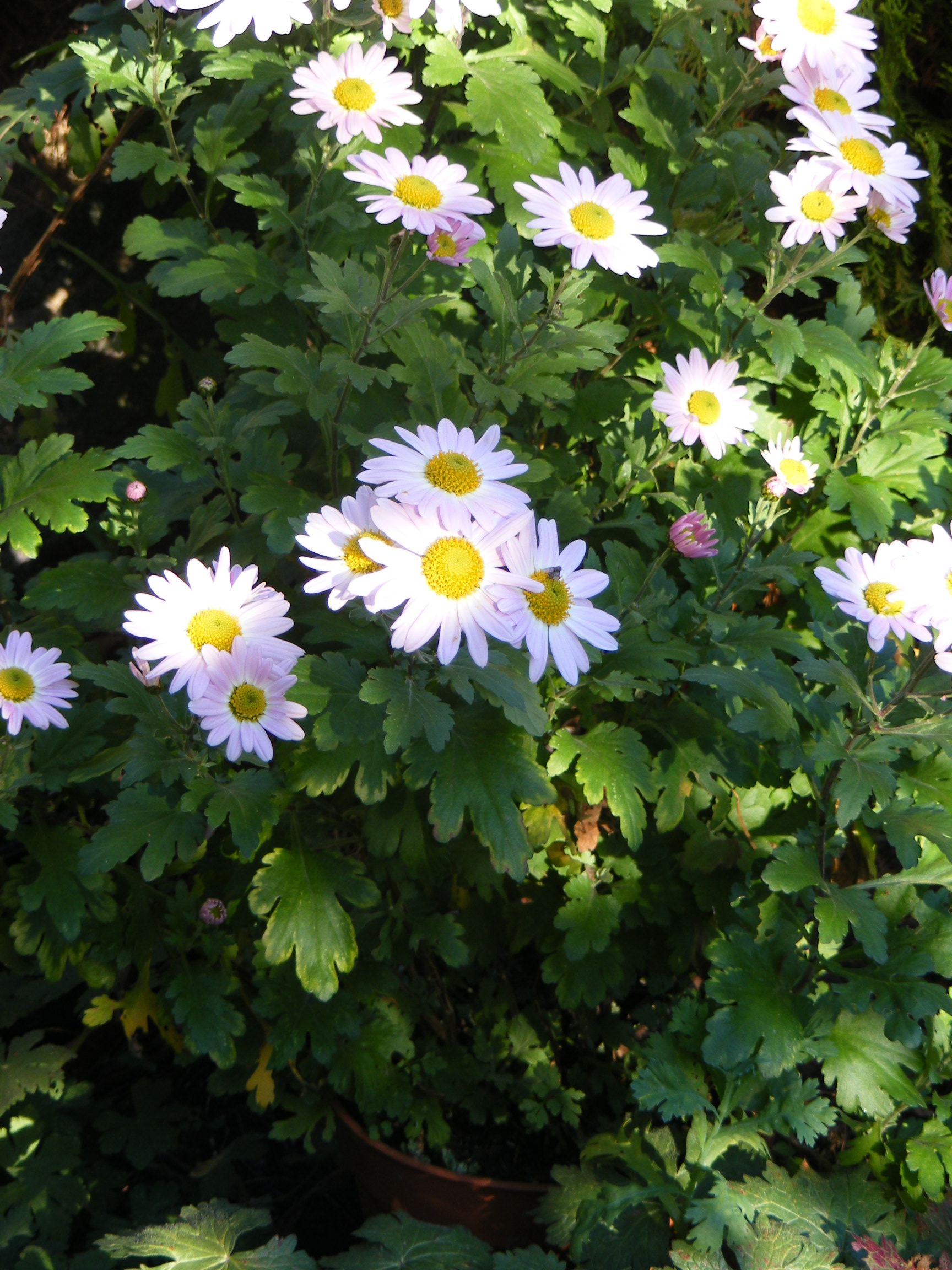 I have become a bit of a fan of pot culture in the border. It is so practical. Firstly it allows me to fill vacant spots with temporary plants, and I can squeeze a plant with a short flowering period onto the centre stage. Secondly, plants that are susceptible to slug and snail damage can fare better in a pot with a band of copper tape encircling it. An example is Chrysanthemum ‘Innocence’ (pictured) which I grew successfully in a pot last year. I planted it in the ground in the spring and it was beleaguered by gastropods all spring and summer. I finally dug the tattered remains up in August and put them into two pots. Since then they happily put on a good deal of fresh growth, and started flowering towards the end of October. The pot is obscured by hardy geraniums in the front. Autumn Asters can be treated in the same way – I grow these in pots as I can minimize slug damage, and as they only start flowering in late September I can place the pot into the border where a spring/summer plant has finished flowering and has been cut to the ground (e.g. poppies, aquilegia). 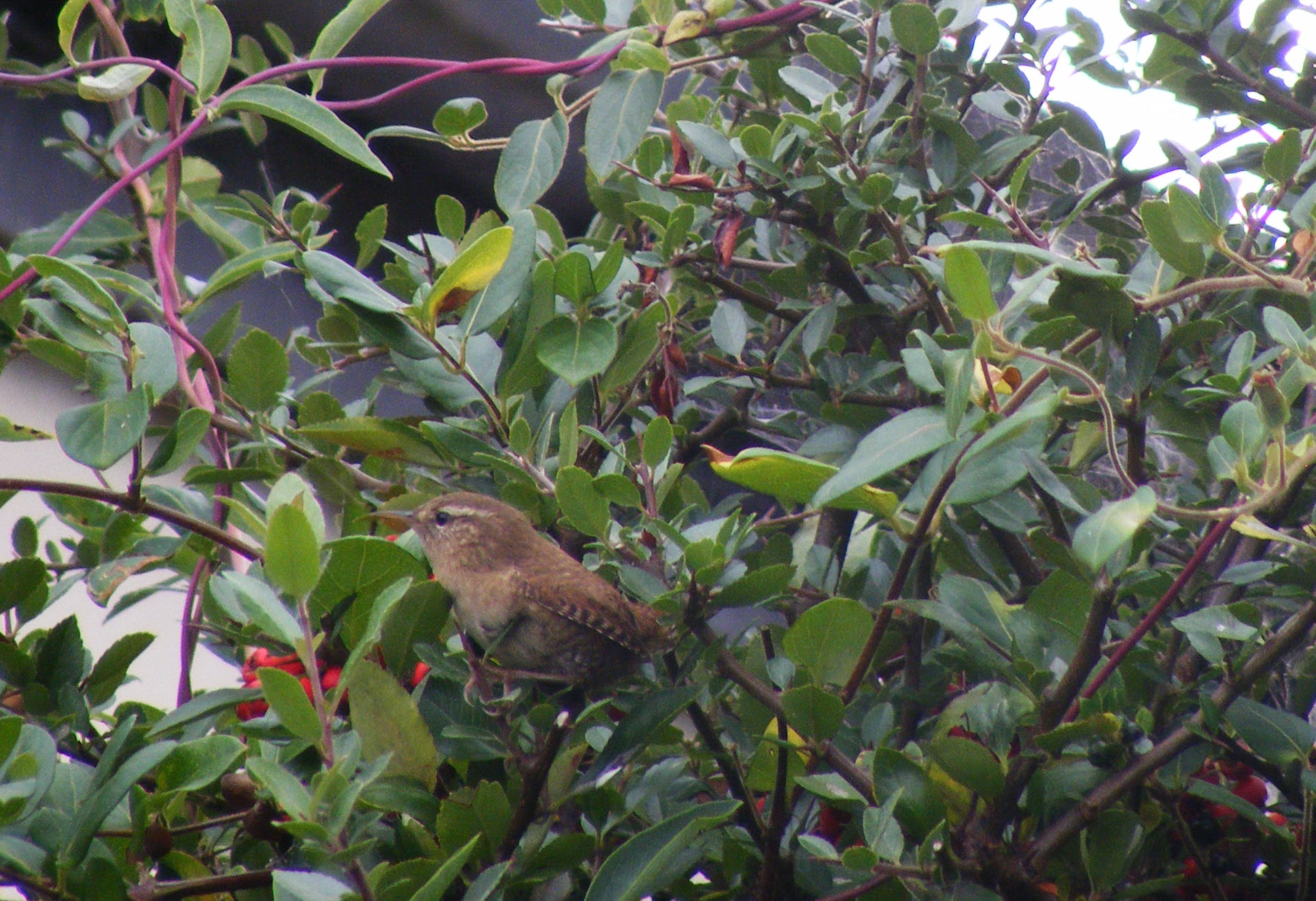 Birds are becoming more visible in the garden during the colder months as they seek supplementary food and a cosy place to shelter. I watched this little wren spend a busy few minutes amongst the tangle of honeysuckle and pyracantha, seeking out insects and larvae. This must be a bountiful time for wrens, judging by the amount of spiders in the garden! It is quite amusing to visually follow their trail through the bushes – their presence only being given away by the occasional abrupt juddering of a branch or twig. Their elusive nature belies the fact that they are Britain’s commonest birds. They’re also one of the loudest – you may hear them rather than see them. Their birdsong can be heard here.

I haven’t seen the hedgehogs since 30th September. I can’t believe they went into hibernation then as it was still warm, so I’m hoping they’re okay and living in someone else’s garden. I’m a bit peeved that all my preparations for their cosy retreats in the garden and garage have gone unnoticed though! 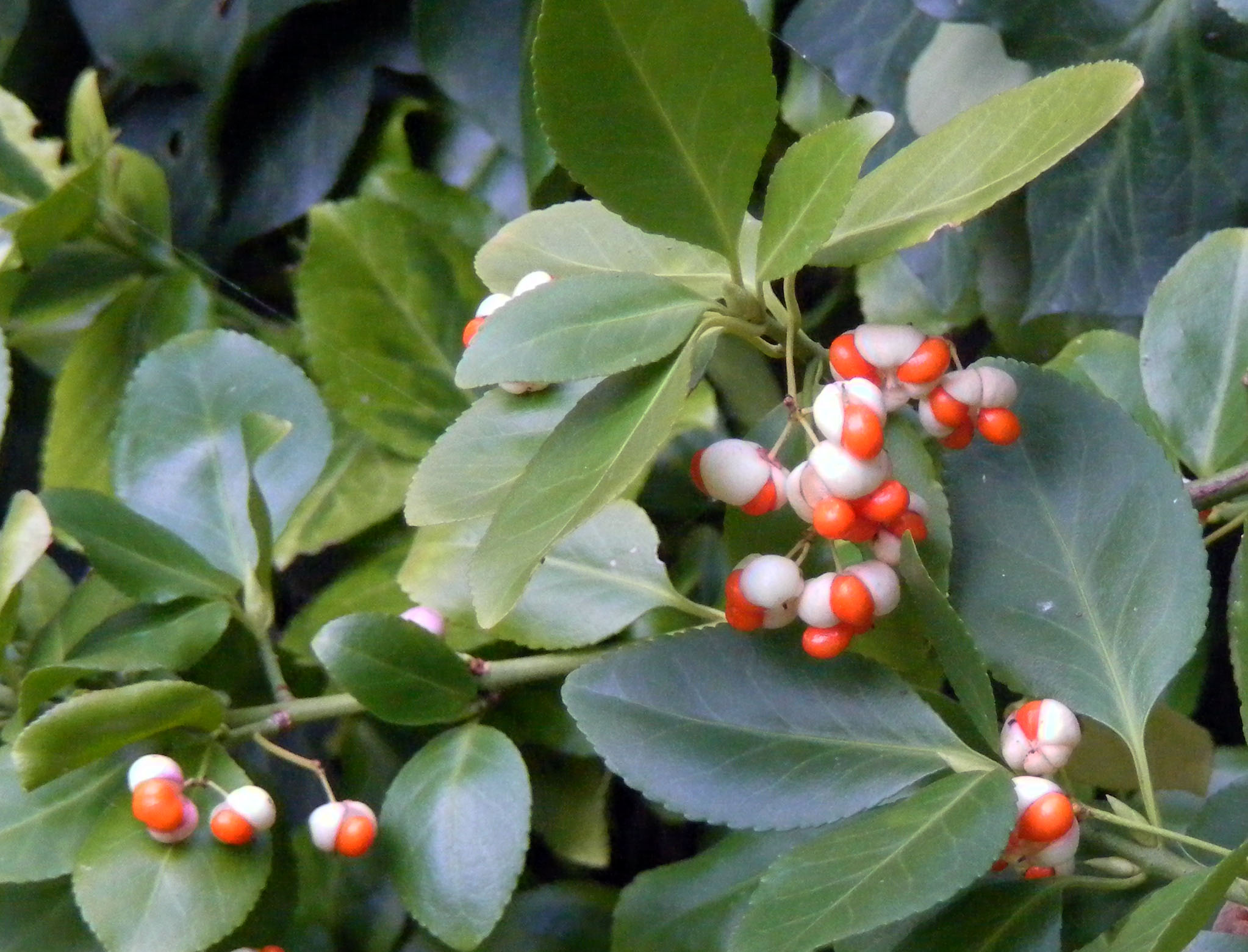 The common evergreen shrub Euonymus (here ‘Emerald ‘n’ Gold’) is most often used as a hedging plant in a similar way to privet. As it is usually clipped into a formal shape it rarely gets a chance to keep its flowers and subsequent fruit. We have a mature plant of this type growing as an informal wall shrub at the bottom of the garden, which I trim only lightly and occasionally when a straggly branch grows outwards. It has produced its yearly show of unassuming white pods, which split open to reveal bright orange fruits.

This plant is from the same botanical family as the deciduous Euonymus or spindle tree, the only obvious similarity being the fruiting pods. Its wood used to be employed for making spindles and pipe stems. 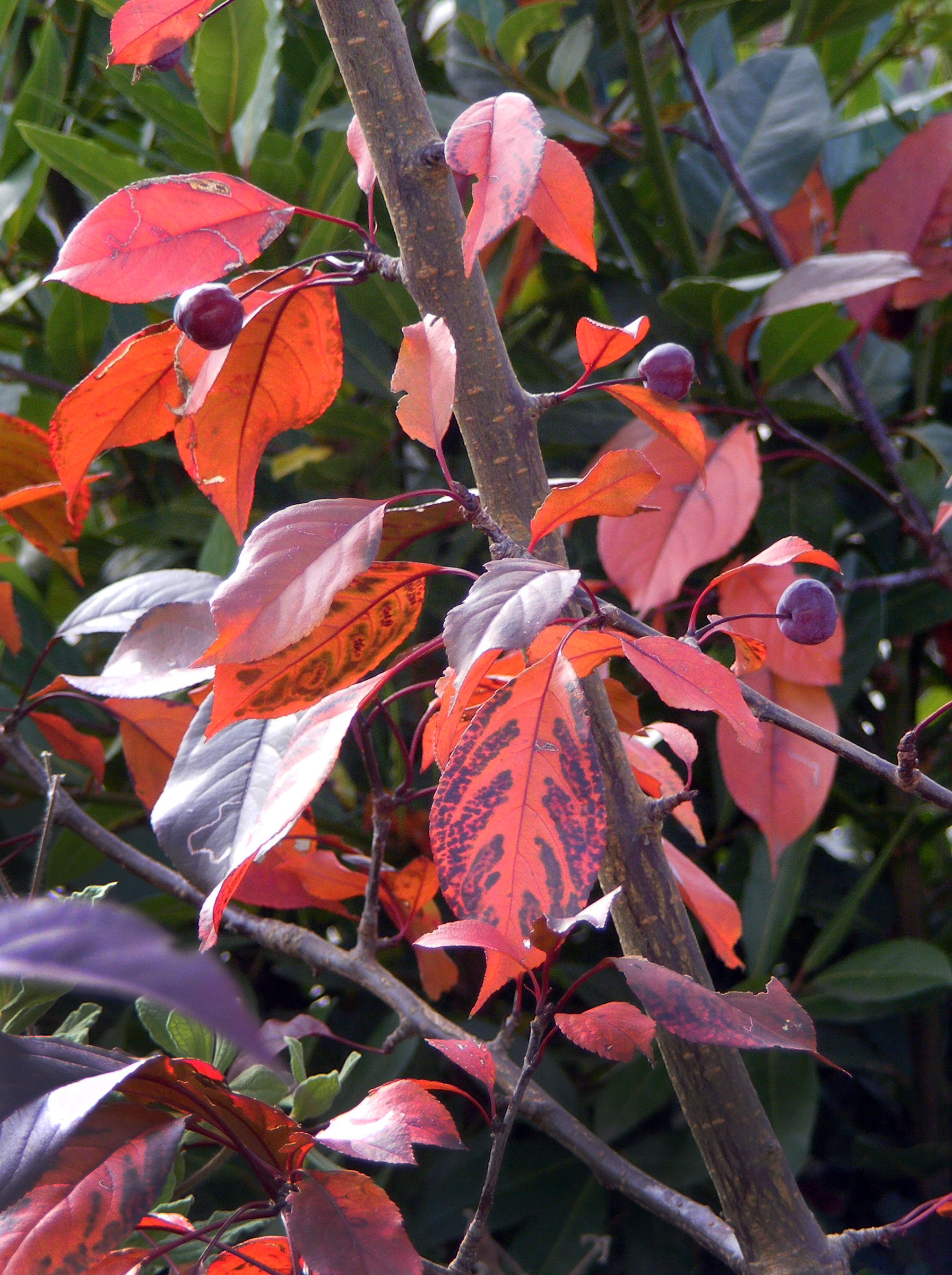 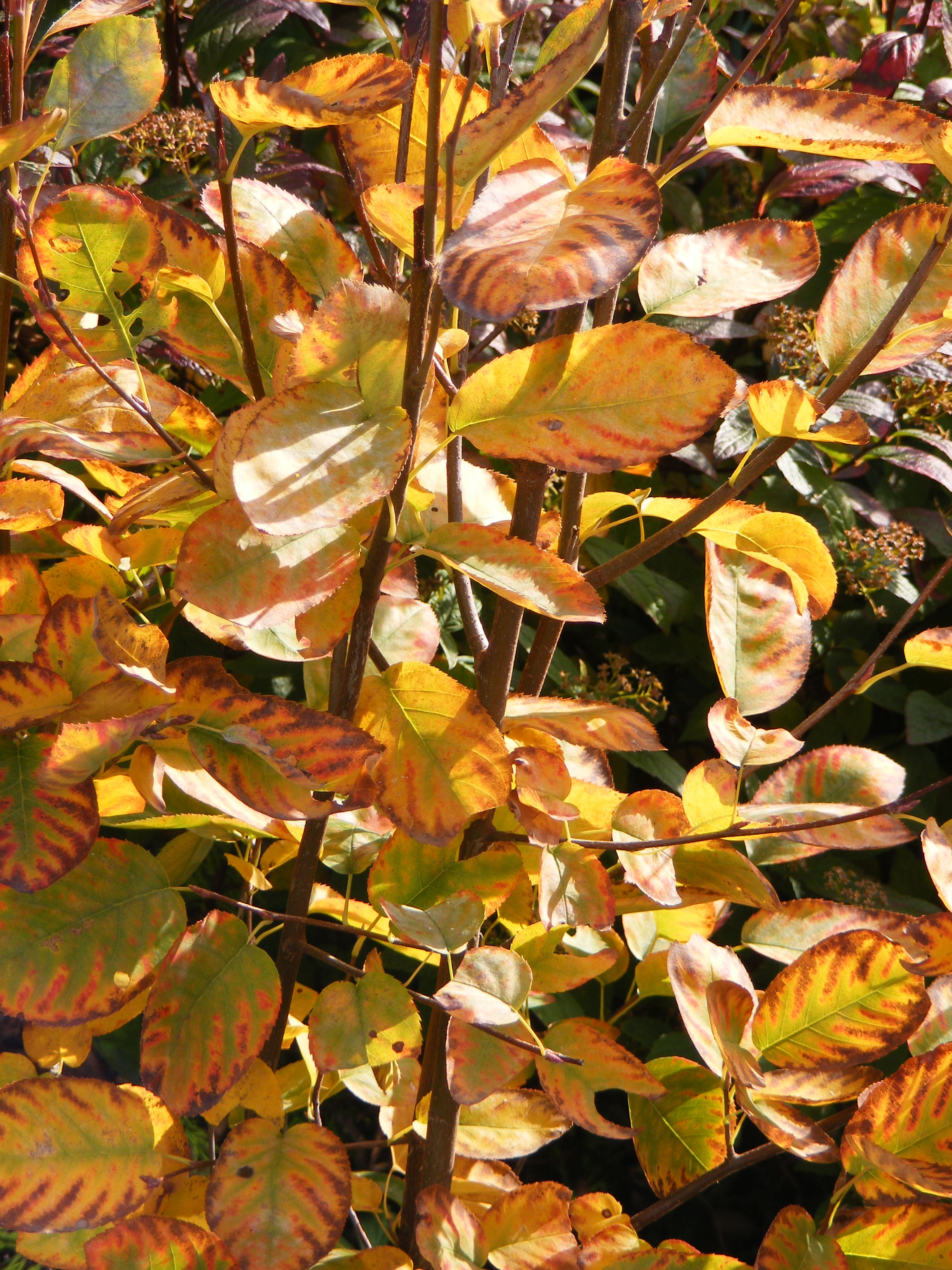 I love the way these leaves change colour. 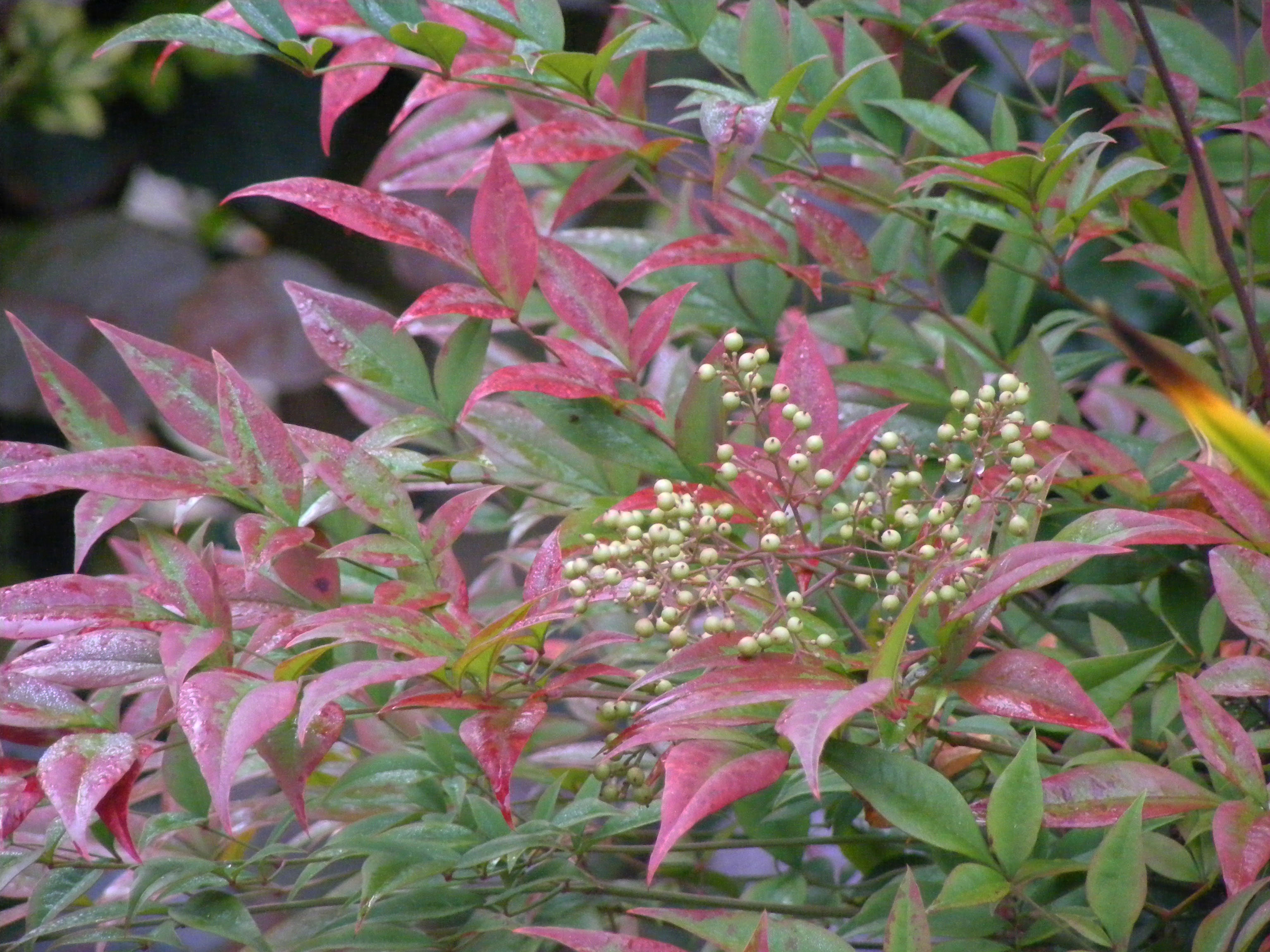 Nandina domestica, or Heavenly Bamboo is not a bamboo at all. It is a useful evergreen foliage plant that turns a deep red in the autumn/winter. Its immature berries shown here will soon turn bright orangey-red, a welcome splash of colour for the wintertime. 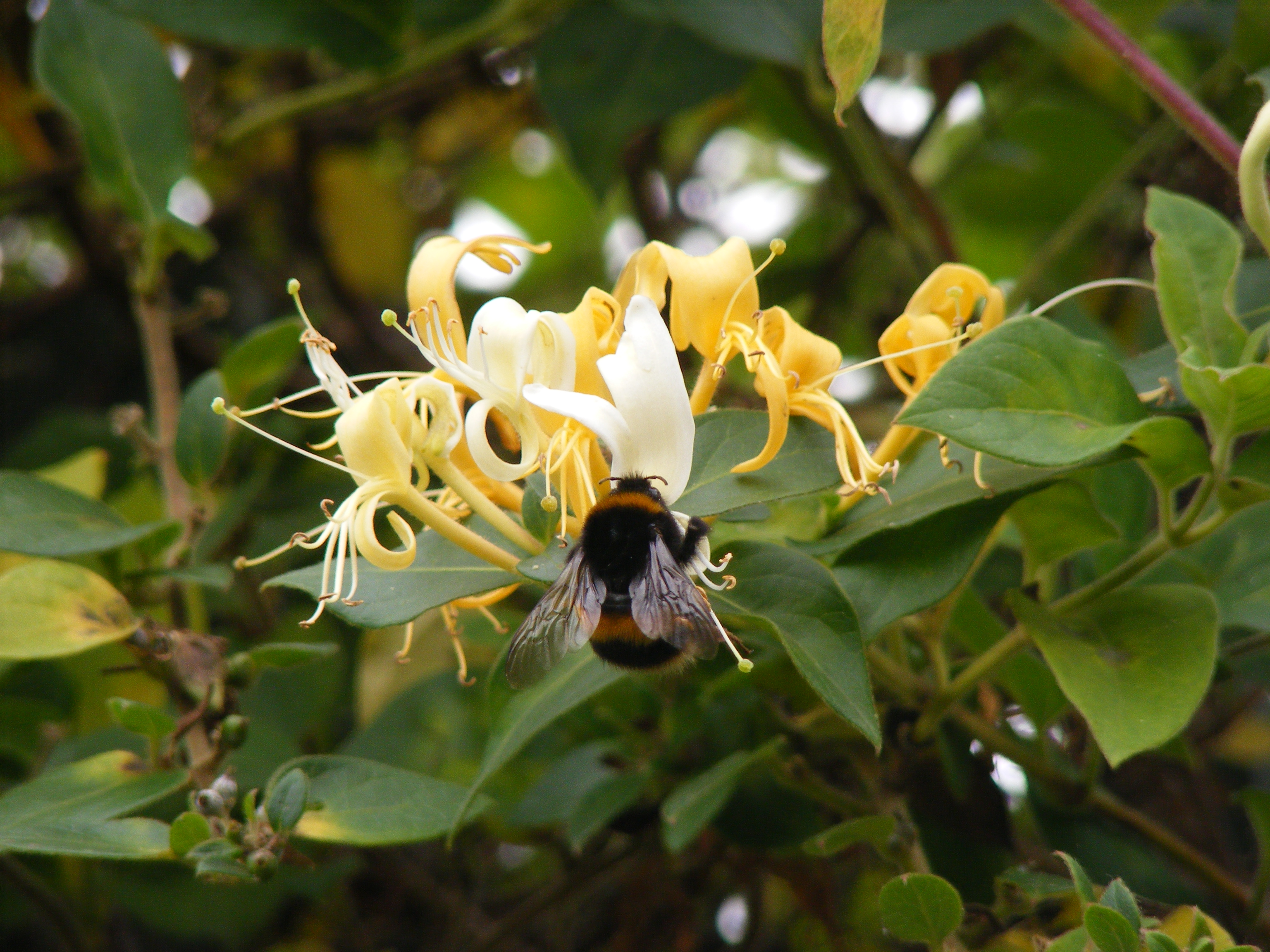 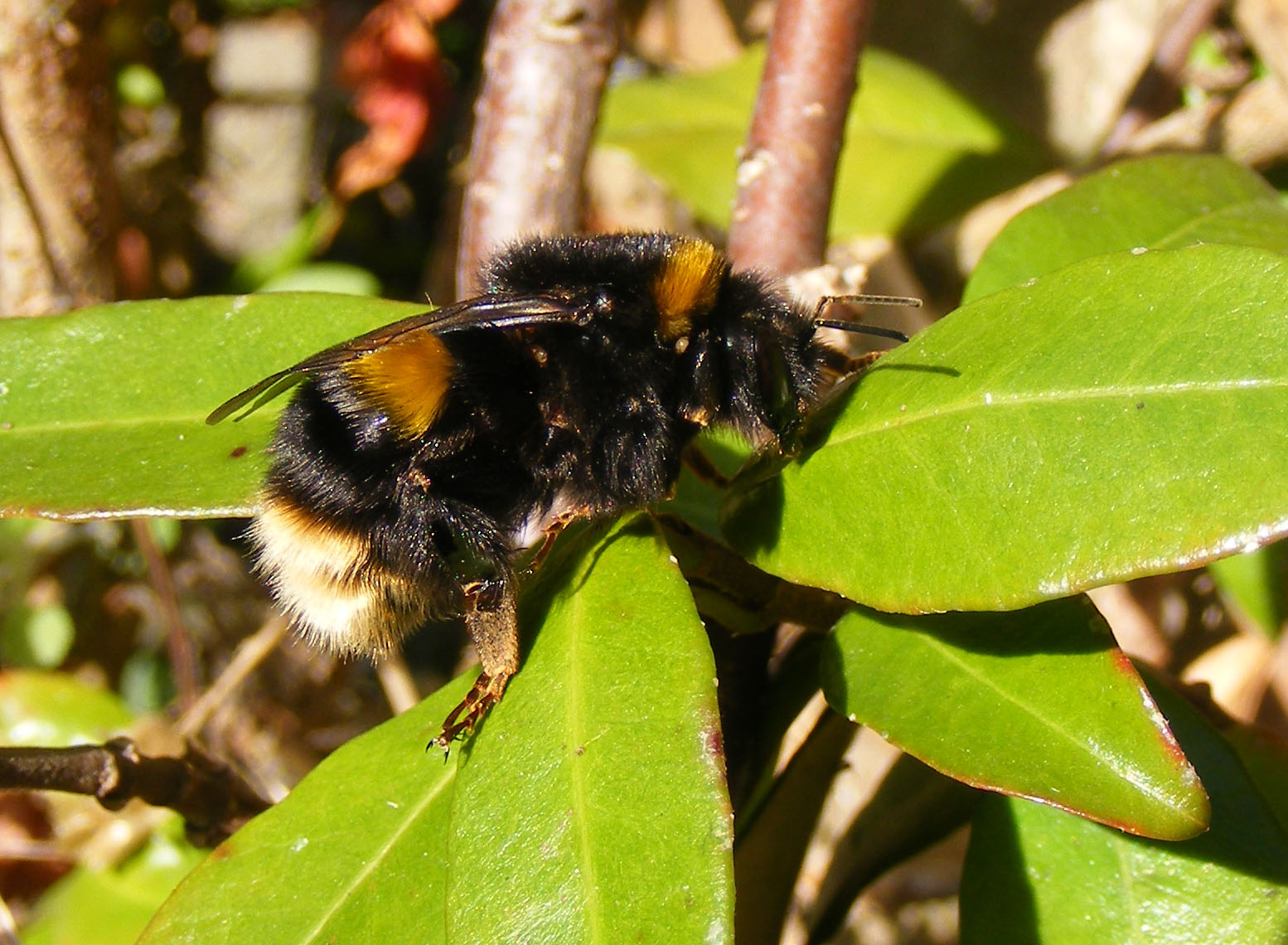 For most bumblebees species, winter is a time for hibernation. The Buff-tailed bumblebee however, is usually fully active throughout winter in warmer parts of the UK, even when temperatures are close to freezing. This enormous queen has been buzzing about the garden lately, feeding off the dwindling sprays of honeysuckle flowers. 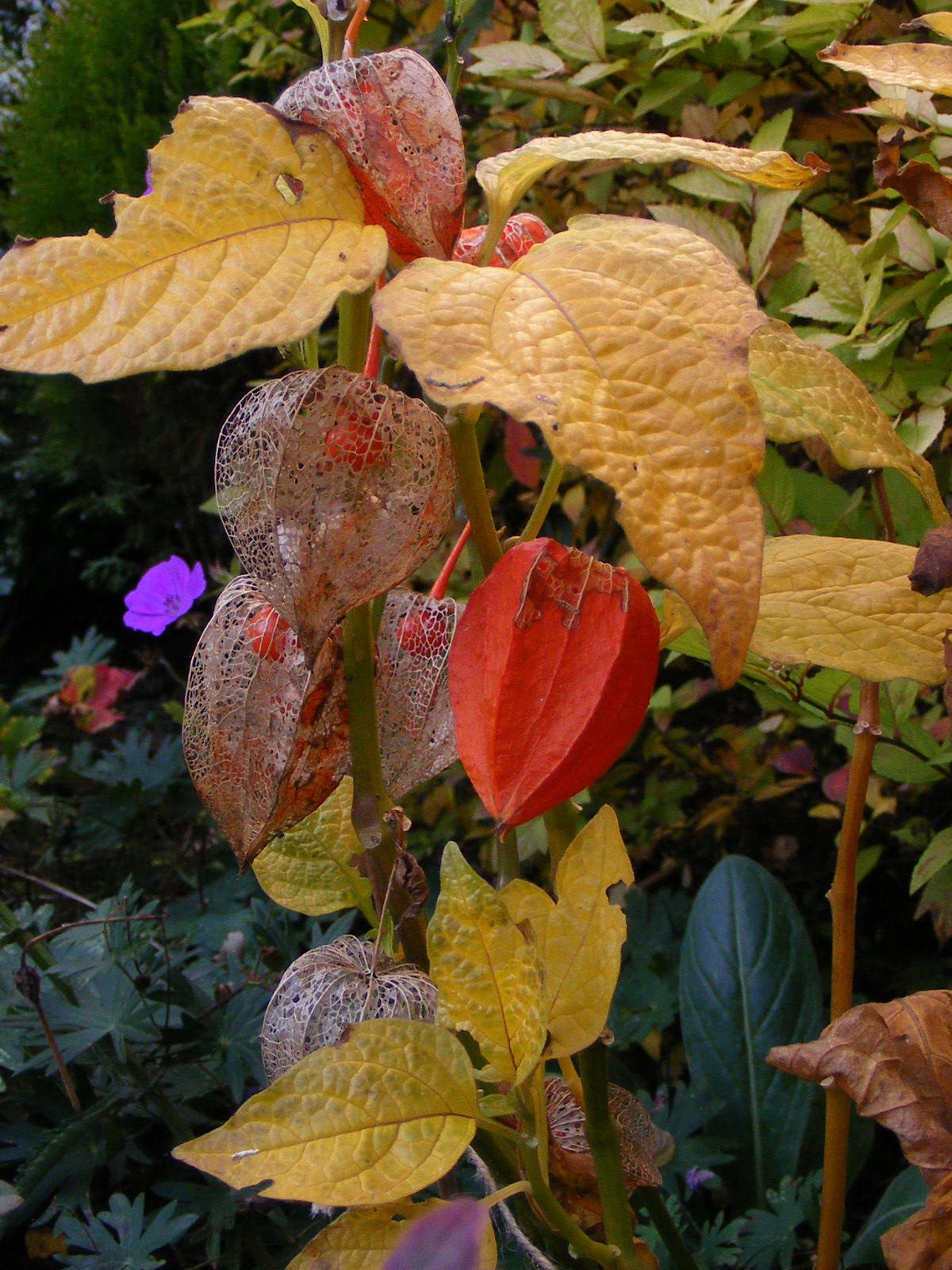 Here’s one for you Chris. Now you can see inside those Chinese Lanterns!

2 thoughts on “An October Garden”