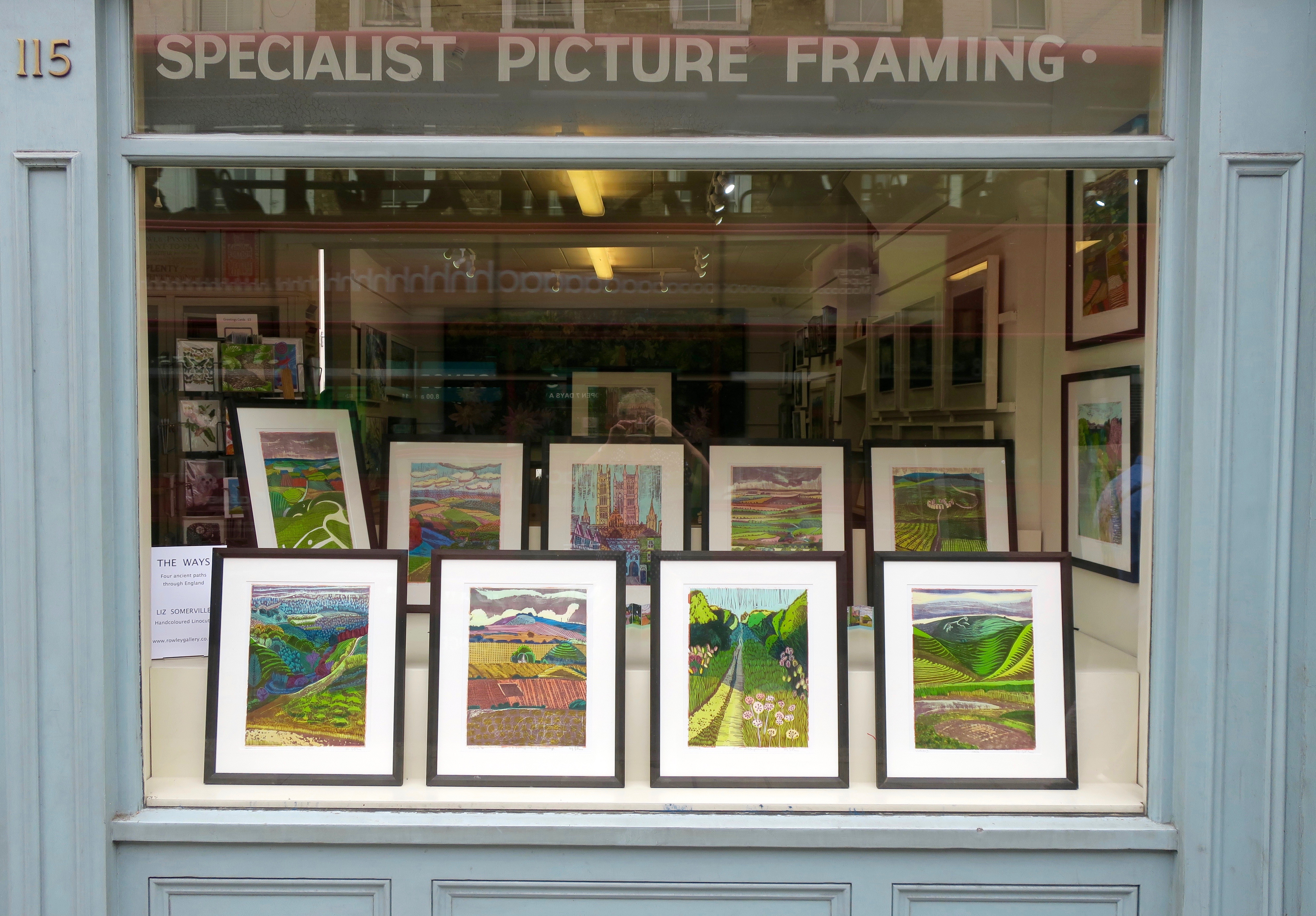 Twelve framed hand-coloured linocuts by Liz Somerville in our window throughout August and September. They’re part of a suite of 48 prints called The Ways, celebrating four ancient paths through England. There’s also a limited edition concertina booklet of all the images in miniature. 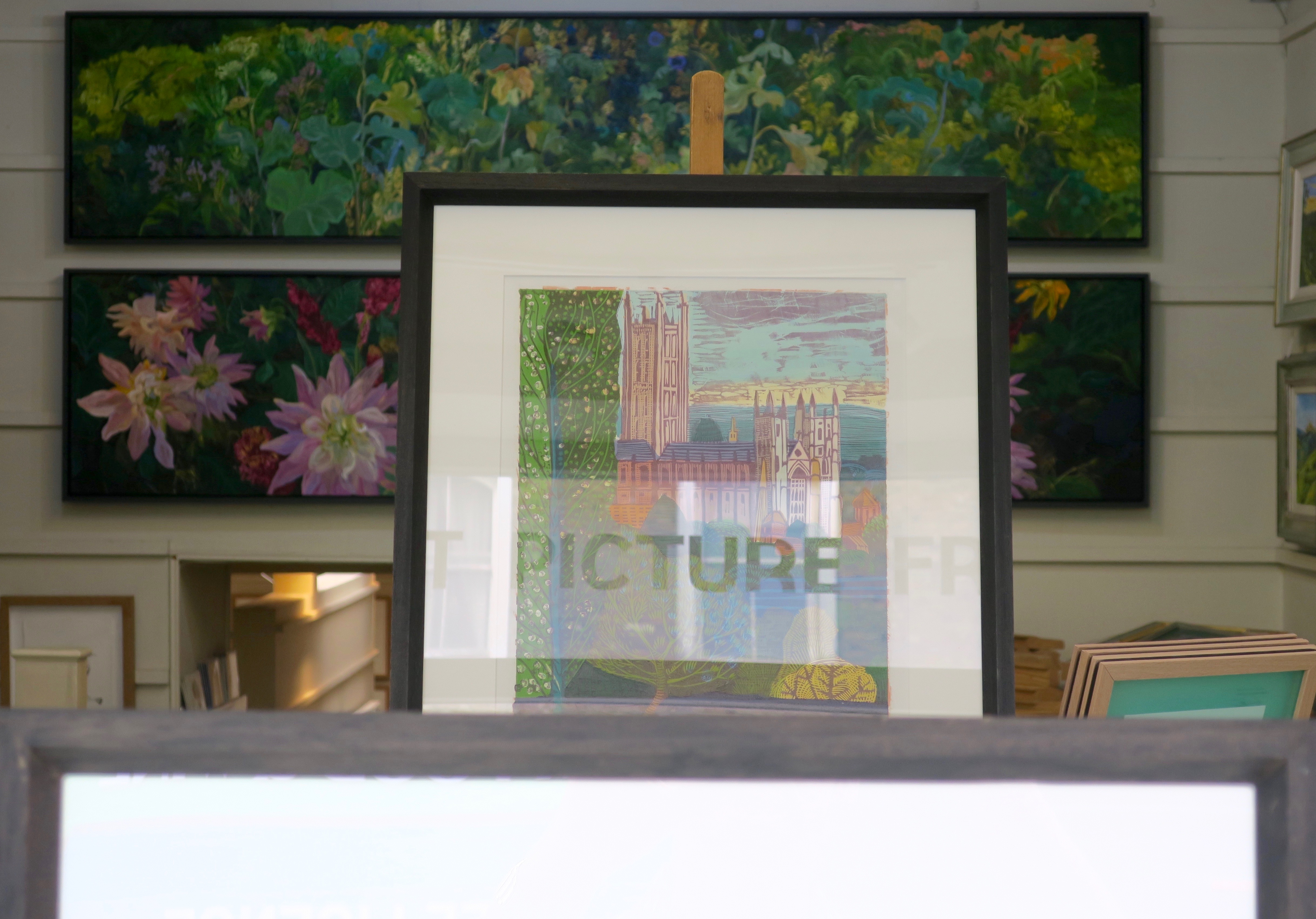 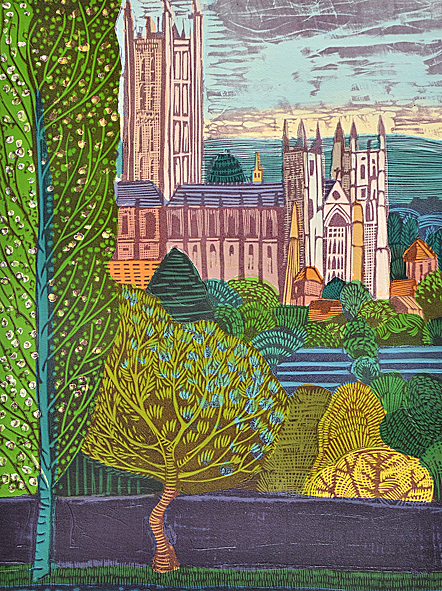 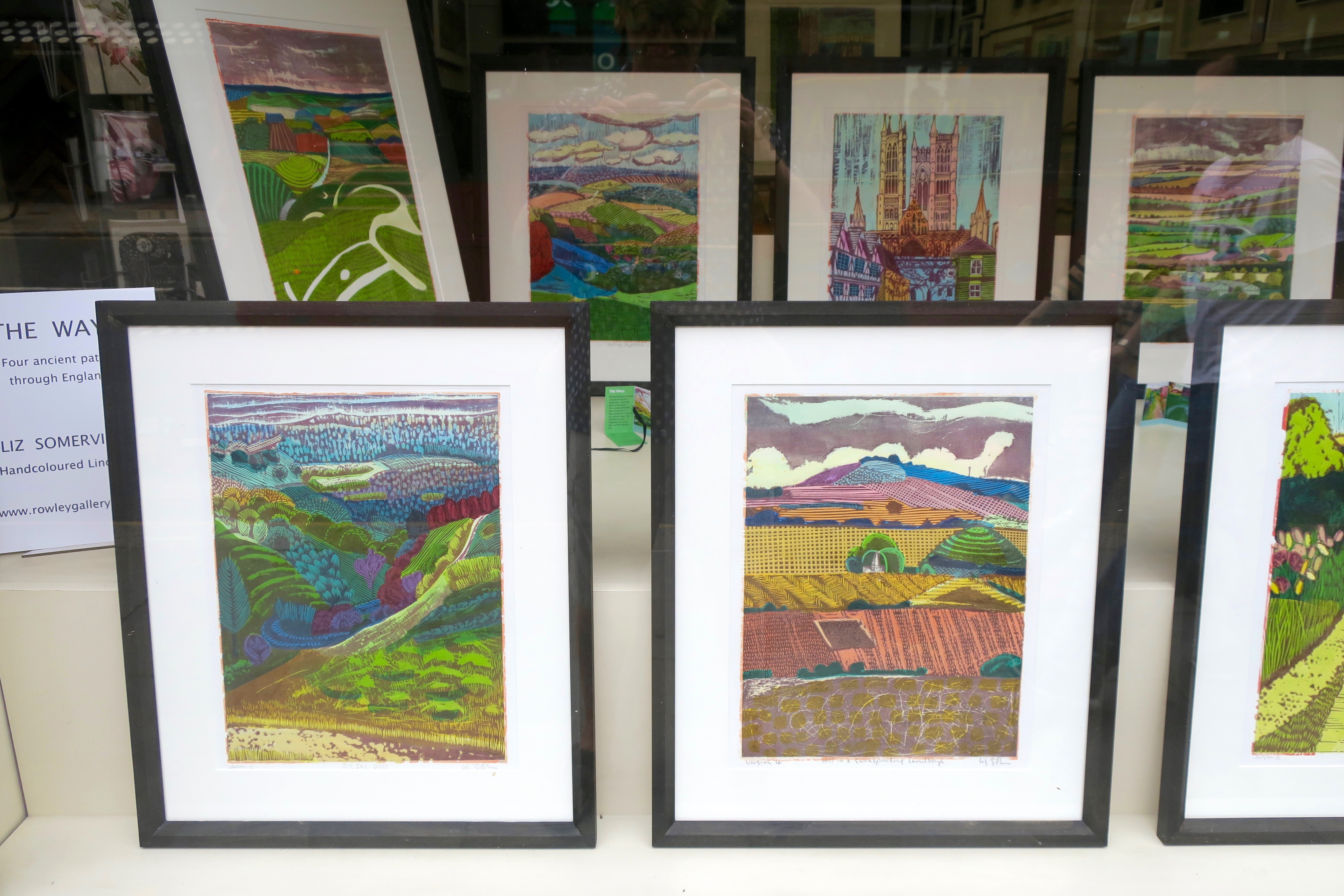 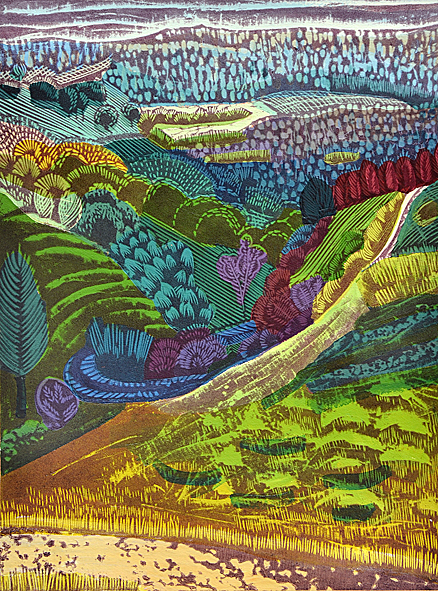 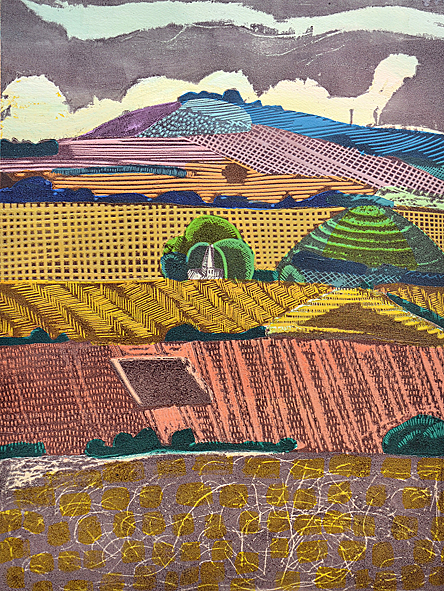 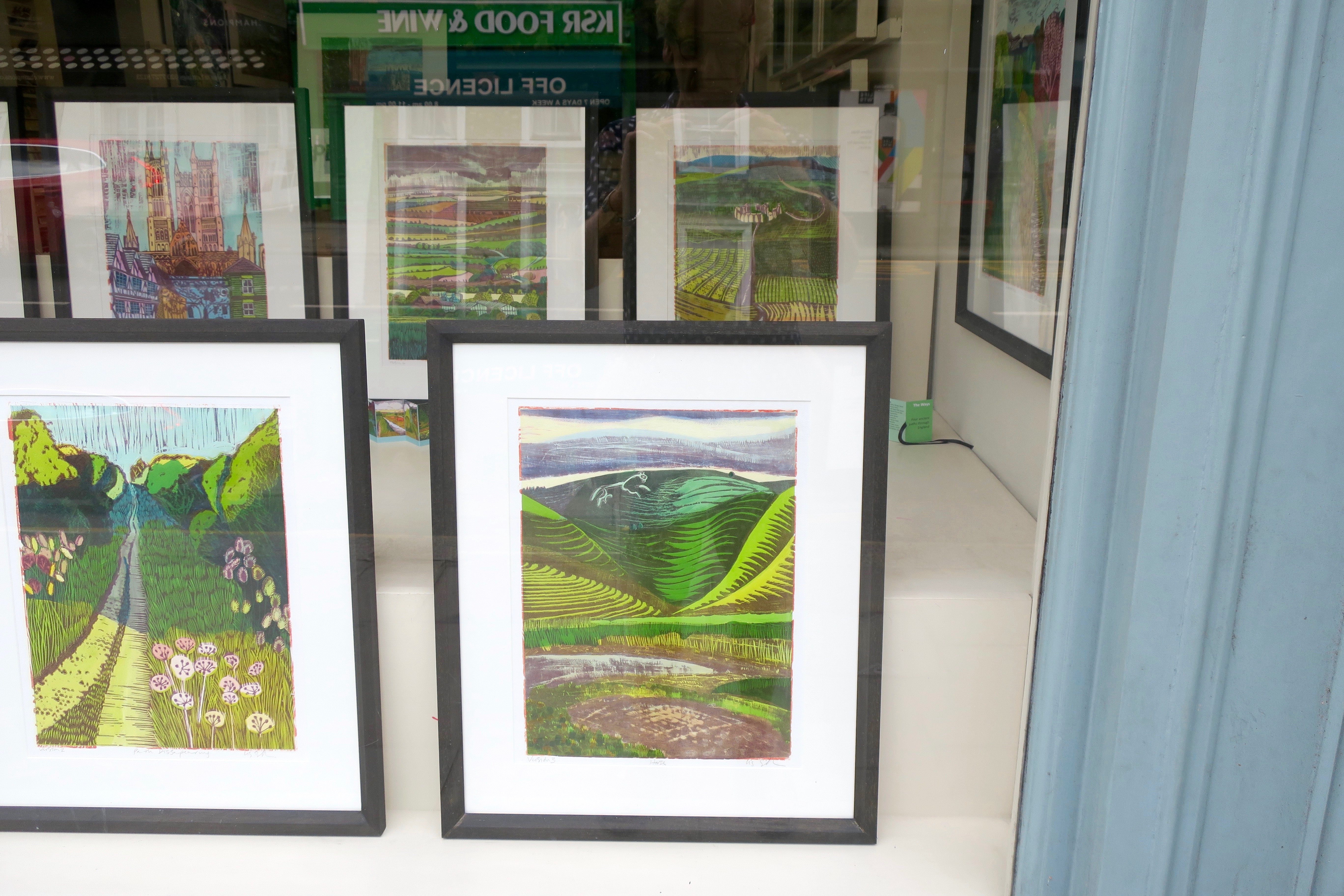 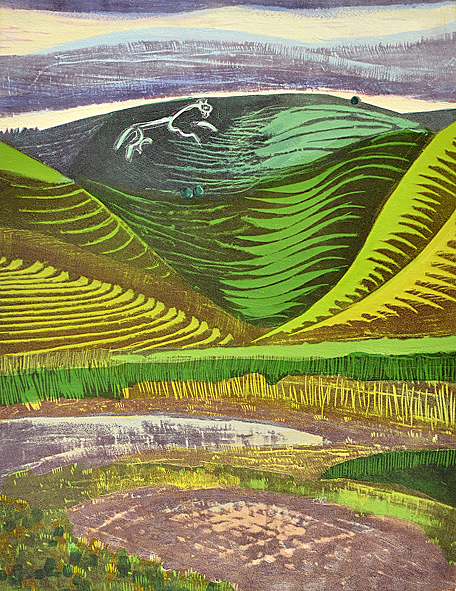 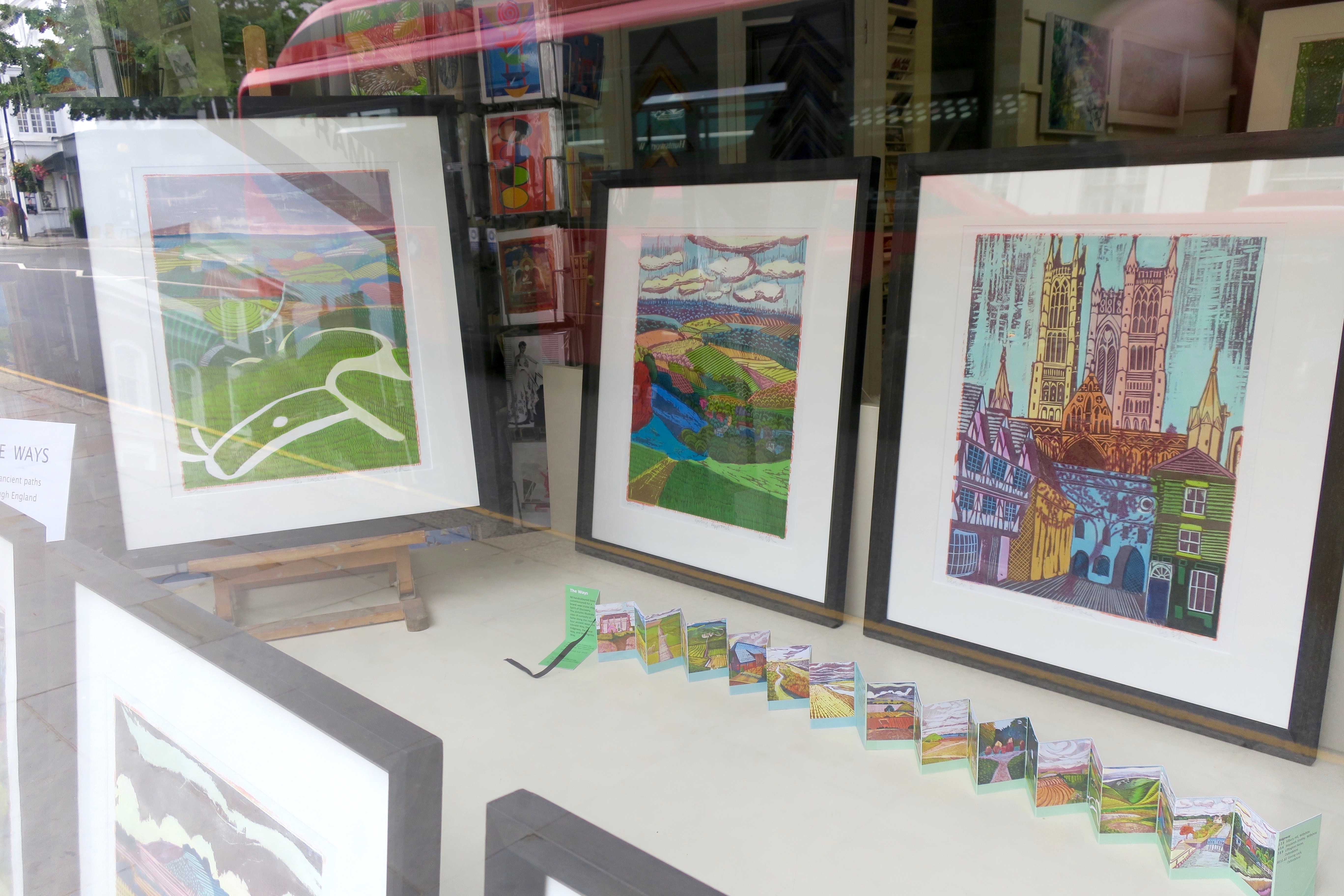 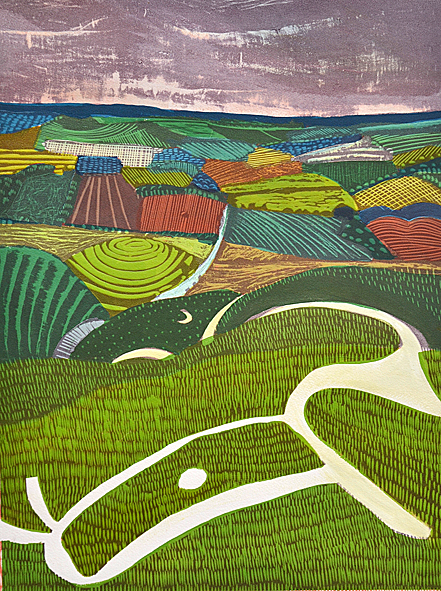 The Ways: 20 Eye of the Horse
Ridgeway: Uffington Horse, Oxfordshire 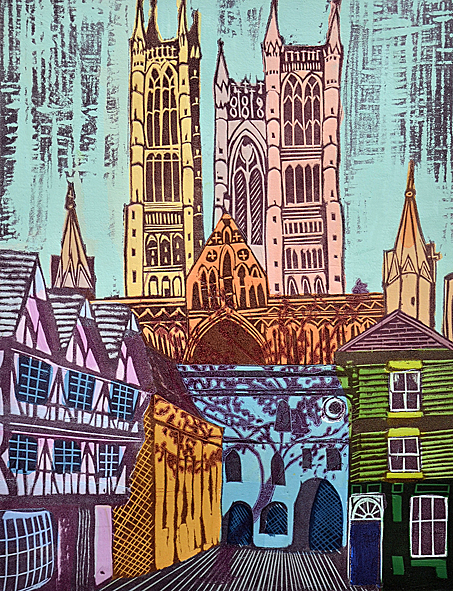 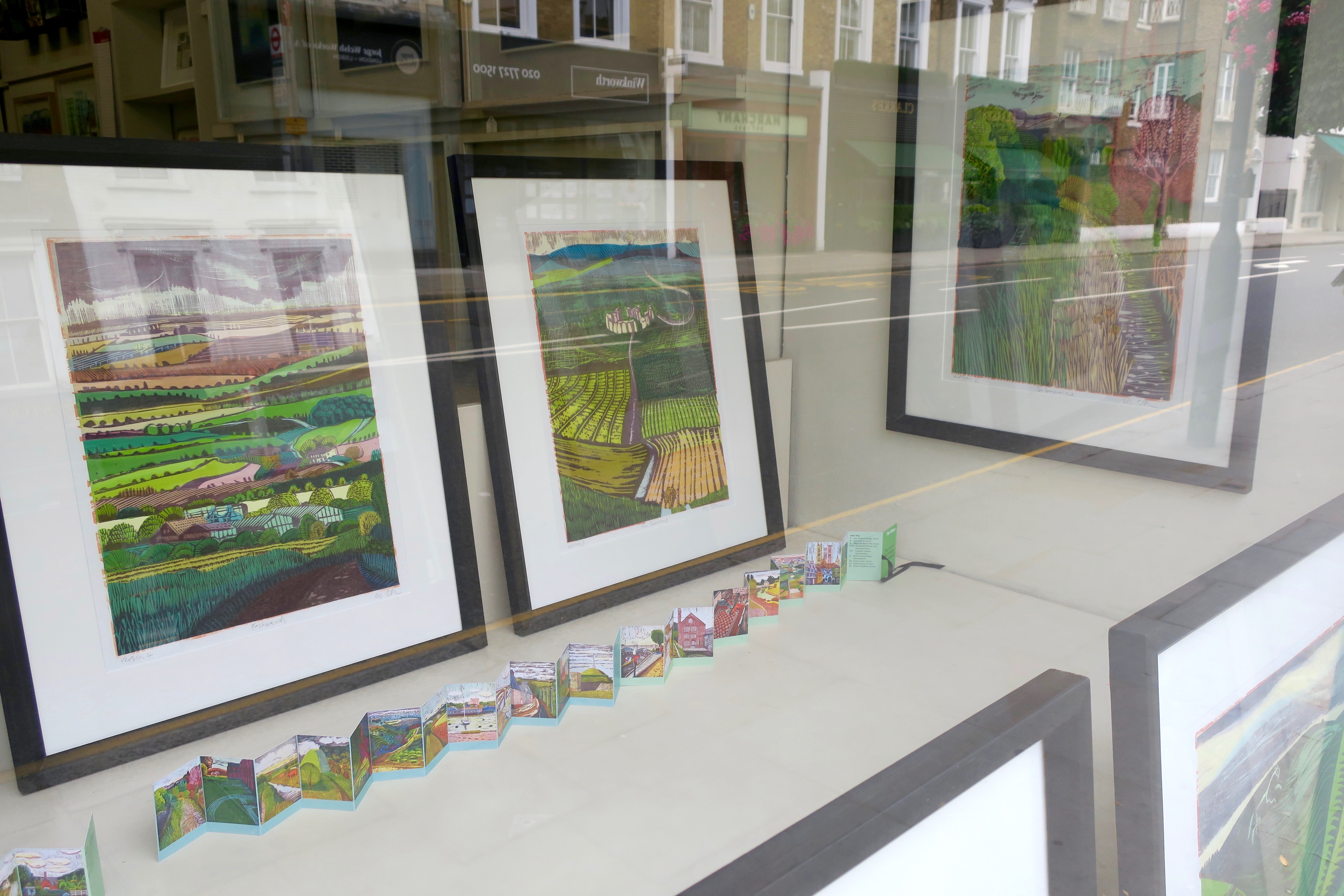 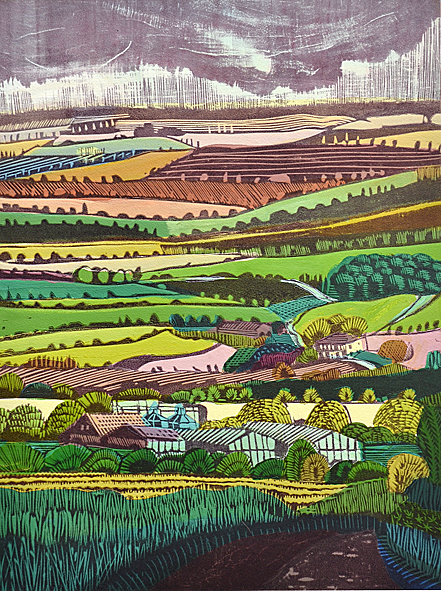 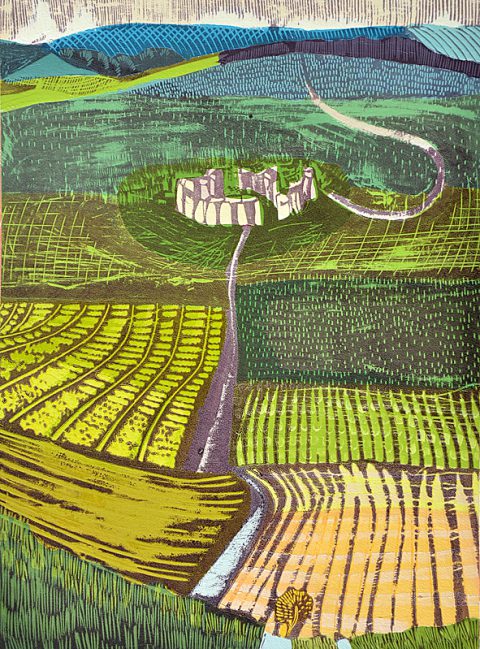 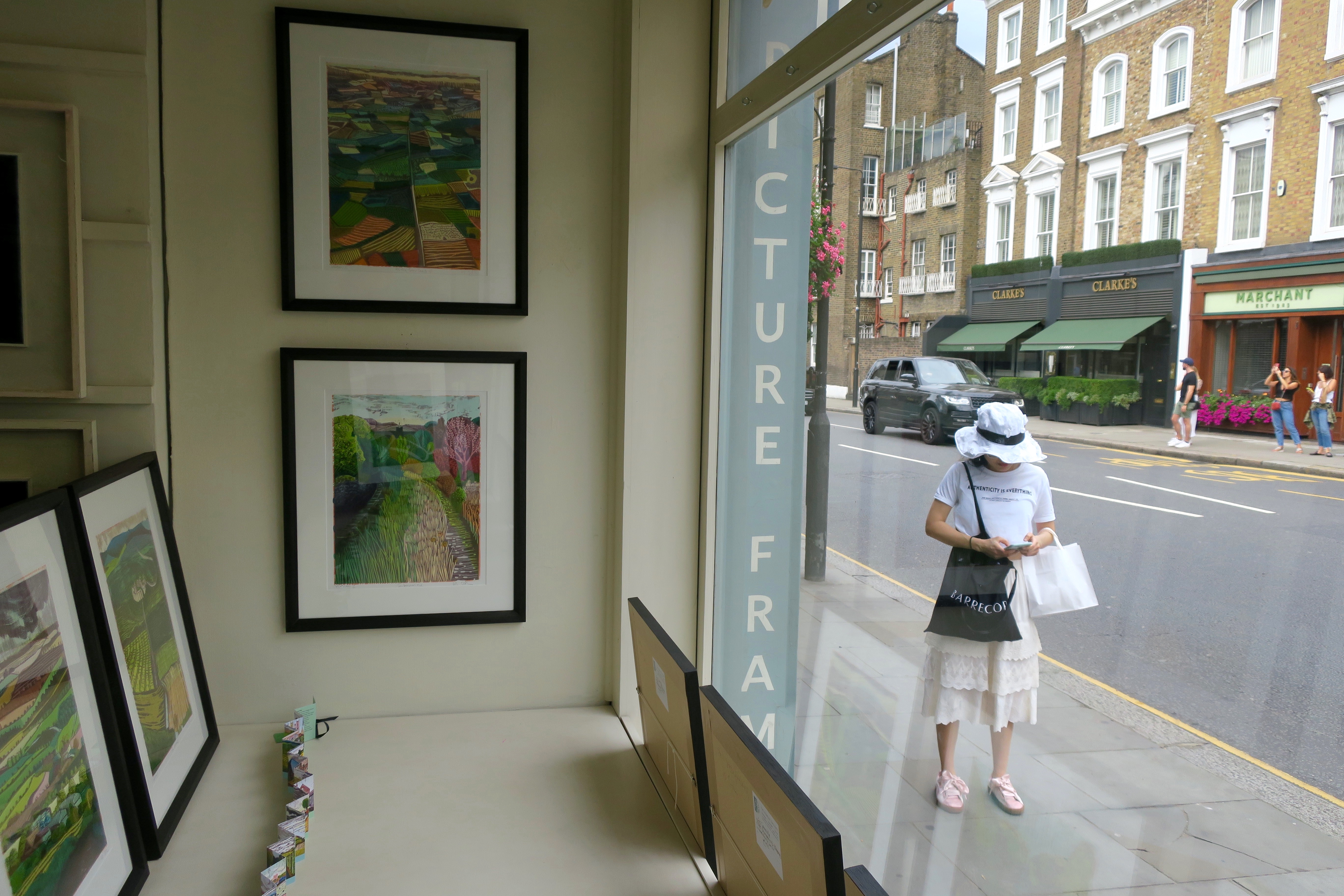 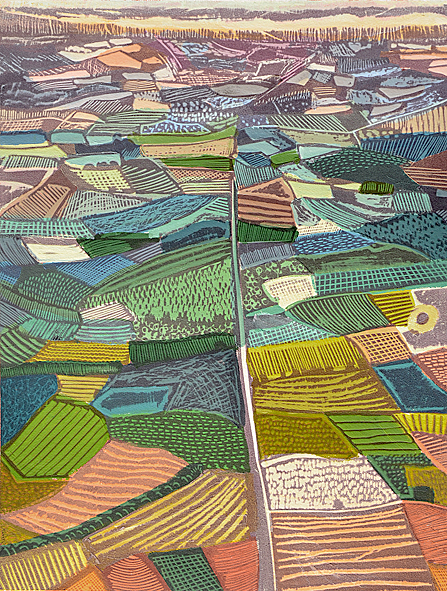 The Ways: 33 As The Crow Sees It
Fosse Way: B4455 Roman Road, Warwickshire 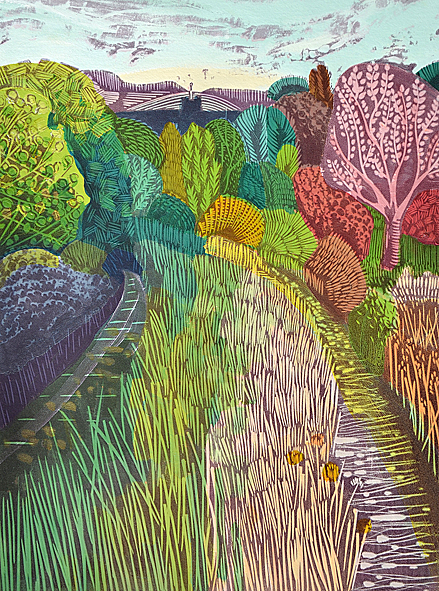 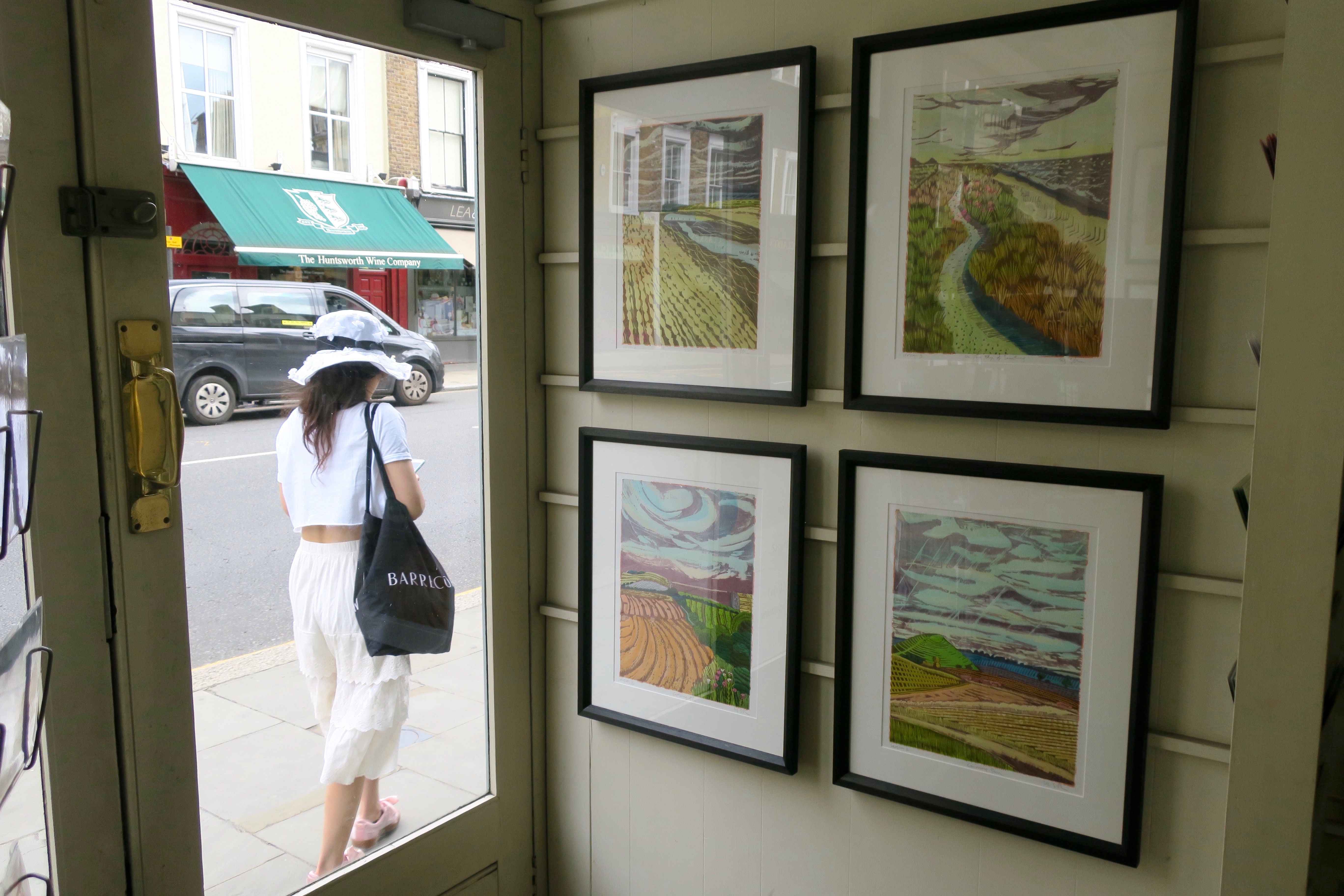 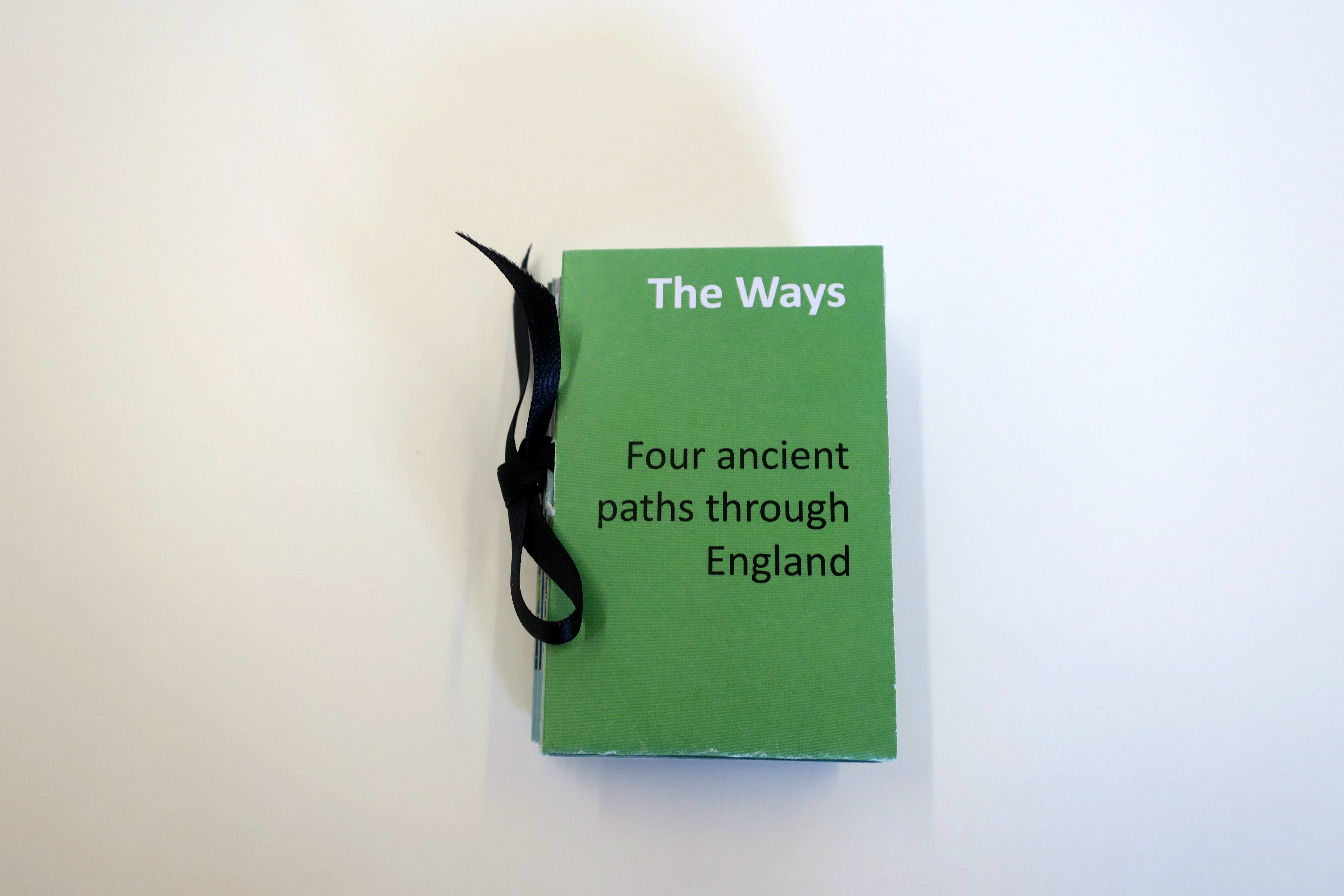 The Ways, 48 hand-coloured linocuts commissioned for the new cruise ship, ‘Spirit of Discovery’. The pictures illustrate sites of fame or curiosity along the routes of four ancient ways – 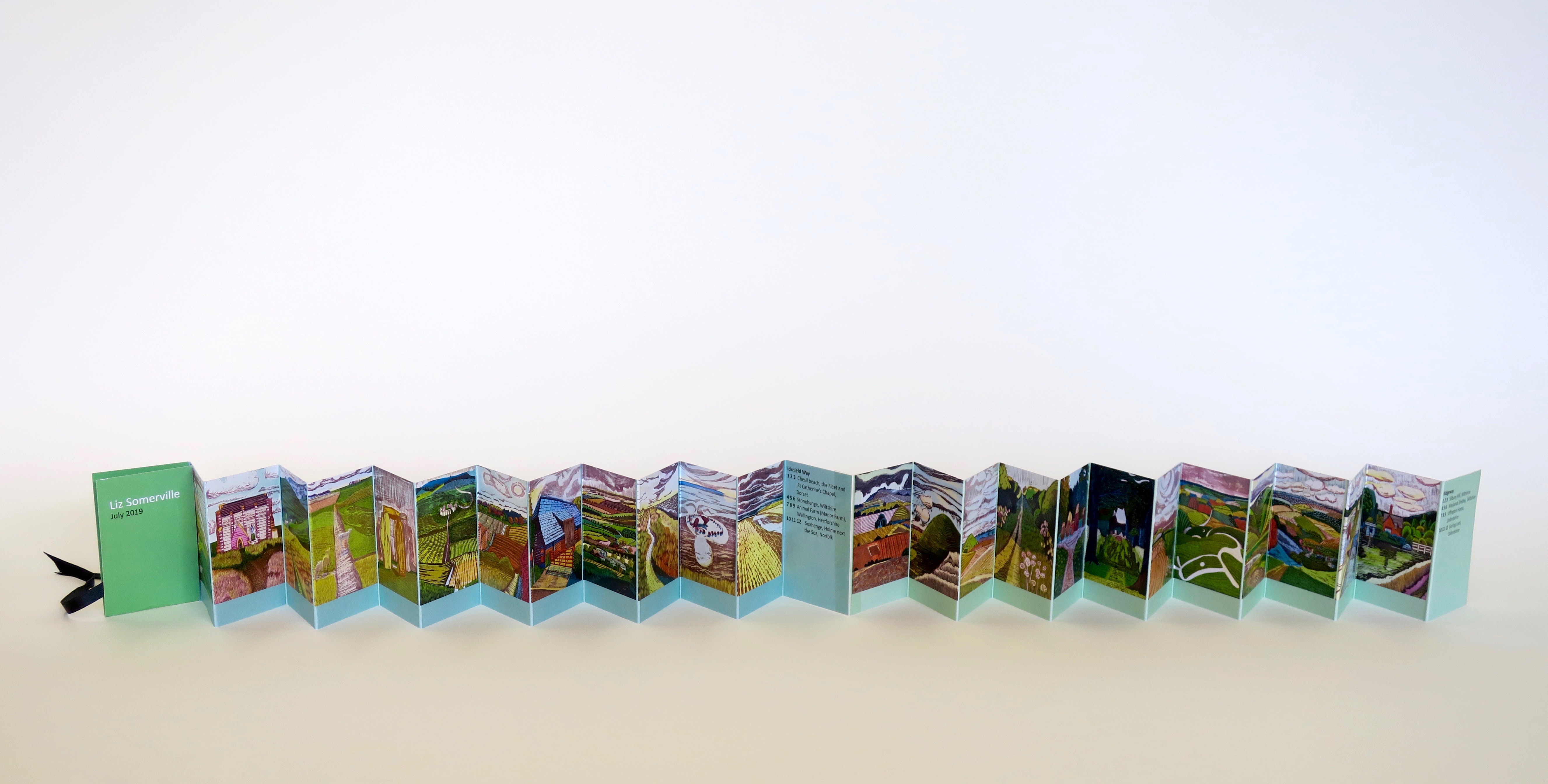 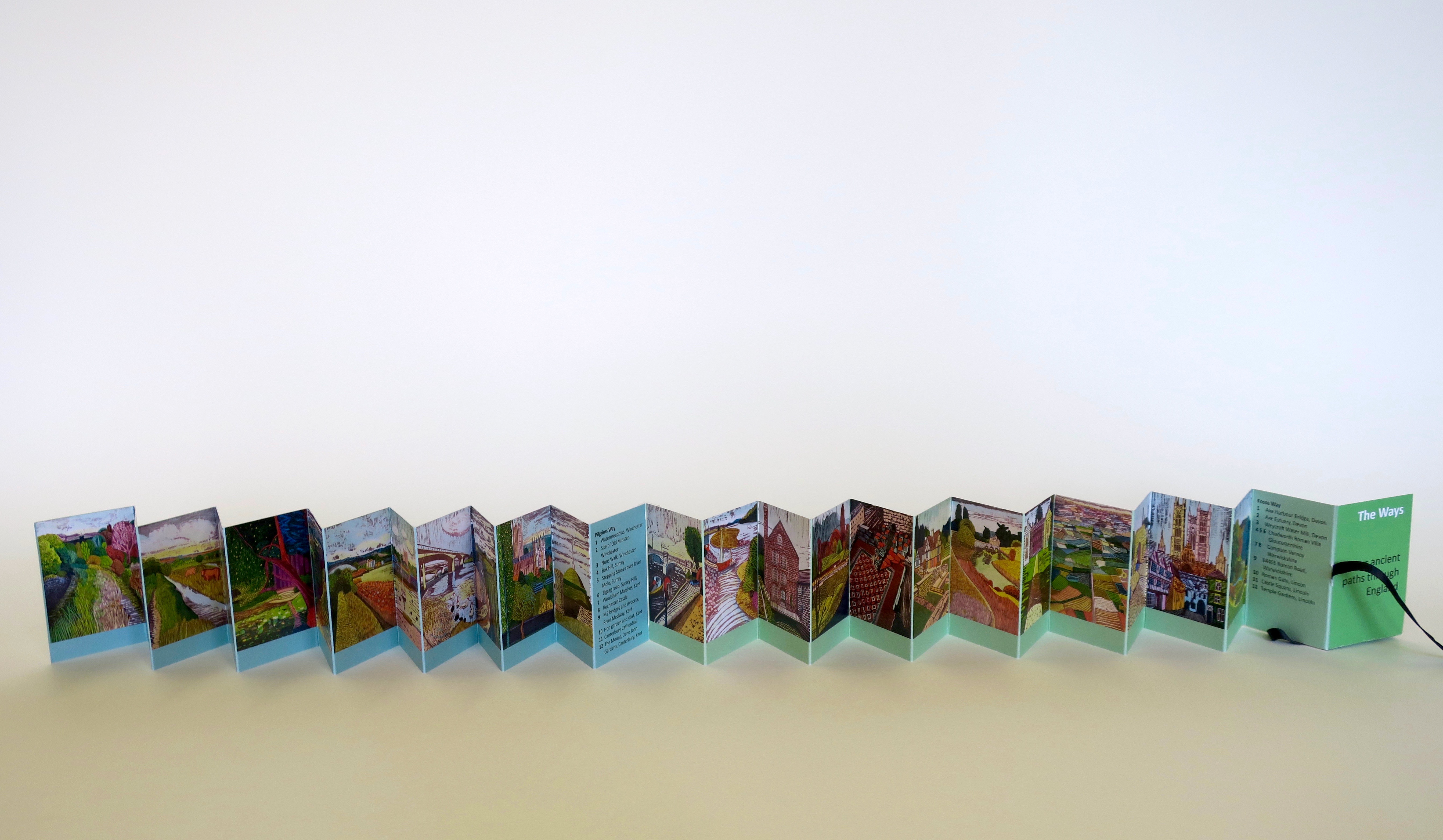 Designed as triptychs, there are four sites along each of the four routes.

Follows an ancient route from Abbotsbury on the Dorset coast to Holme-next-the-Sea in Norfolk, and is known as the oldest road in Britain.

Triptych one: St Catherine’s Chapel overlooks Chesil Beach and the Isle of Portland, and was built by the monks of the nearby Abbotsbury Abbey in the 14th century as a place of pilgrimage and retreat. The little chapel has ‘wishing holes’ where local women still pray to St Catherine and ask her to find them a husband. The local parish holds occasional services throughout the year, which are open to the public (taken from English Heritage description).

Triptych three: Manor Farm Barn in Wallington, Hertfordshire. Believed to have been the inspiration for Animal Farm written by George Orwell (Eric Blair) when he lived in the village.

Triptych four: Seahenge was discovered in 1998 by a local man out for a walk. A peat dune had eroded to reveal a Bronze Age circle of wooden posts with an up-ended tree stump poking up out of the sand. The whole arrangement has an approximate diameter of 6 metres and has since been removed to the Lynn Museum in Kings Lynn.

An Anglo-Saxon track stretching from near West Kennet in Wiltshire to Goring-on-Thames, Oxfordshire.

Triptych five: Silbury Hill near West Kennet in Wiltshire is the largest artificial mound in Europe, and compares in height and volume to the roughly contemporary Egyptian pyramids. Probably completed in around 2400 BC, it apparently contains no burial. Though clearly important in itself, its purpose and significance remain unknown. Silbury Hill is part of the Avebury World Heritage Site, and a Site of Special Scientific Interest (English Heritage).

Triptych six: Waylands Smithy is a Neolithic chambered long barrow and was once believed to have been the home of Wayland, the Saxon god of metal working. Human remains found on the site indicate that 14 people were interred in an earlier burial structure between 3590 and 3550 BC. Between 3460 and 3400 BC a second far larger barrow was constructed on top. It is the ruins of this that can be explored by visitors to the site today (English Heritage).

Triptych Seven: The Uffington White Horse is a mile’s walk from Waylands Smithy and is the oldest chalk-cut hill figure in Britain, perhaps over 3,000 years old (English Heritage).

Triptych Eight: Goring Lock situated on the River Thames at the Goring Gap in the Chiltern Hills. It’s believed it began life in the 1500s as a flash weir, constructed by the local mill owner to provide him with a head of water to drive the water wheel.

A Roman road starting at Axmouth Harbour in east Devon to Lincoln.

Triptych nine: River Axe Estuary. The toll bridge spanning the harbour entrance at Axmouth is the oldest surviving concrete bridge in England and was built in 1877. The watermill at Weycroft is an 18th/19th century structure and built on the site of a medieval mill.

Triptych ten: Chedworth Roman Villa was discovered in 1863 when a workman found fragments of paving and pottery on the site. Built in 2nd century AD it was abandoned in the 5th century after the departure of the Romans. Wonderful examples of sophisticated Roman engineering are evident with complex underfloor heating systems supporting intricate mosaic floors. It is one of the most important sites of Roman Britain.

Triptych eleven: Compton Verney in Warwickshire is a grade 1 listed Georgian manor house, extended in the 1760s by Robert Adam and landscaped by ‘Capability’ Brown. Bought by a Trust in 1993, it has been transformed into a sculpture garden and gallery, housing the British Folk Art Collection. The A4455 leading away from it towards Leicester follows the original, dead straight Roman road from Stow-in-the-Wold, Gloucestershire.

Triptych twelve: Lincoln was founded as a Roman Legionary Fortress, accessed via a number of substantial stone built, arched gates. The cathedral was commissioned by William the Conqueror and consecrated in 1092.

An ancient track used by pilgrims between Winchester in Hampshire and the shrine of Thomas Becket in Canterbury Cathedral, Kent.

Triptych thirteen: Winchester, the former capital of England, was home to Alfred the Great. It is approached through the water meadows near the medieval St Cross Hospital, the oldest almshouse in England still in use. You leave Winchester as you approach it, though water meadows.

Triptych fourteen: You walk down Box Hill in Surrey on the way to the Stepping Stones crossing the River Mole and onwards, zig-zagging through the Surrey hills towards north Kent.

Triptych fifteen: The River Medway in Kent is criss-crossed by motorway bridges, but beneath them nature and antiquity persist.

Triptych sixteen: Following the route through the hop gardens, woods and meadows of north-west Kent you reach Canterbury and its cathedral and gardens. Dane John Gardens and its Mount was a Roman cemetery, then a Motte and Bailey and then was made a public space in the 1700s. It’s always been very popular with teenagers. 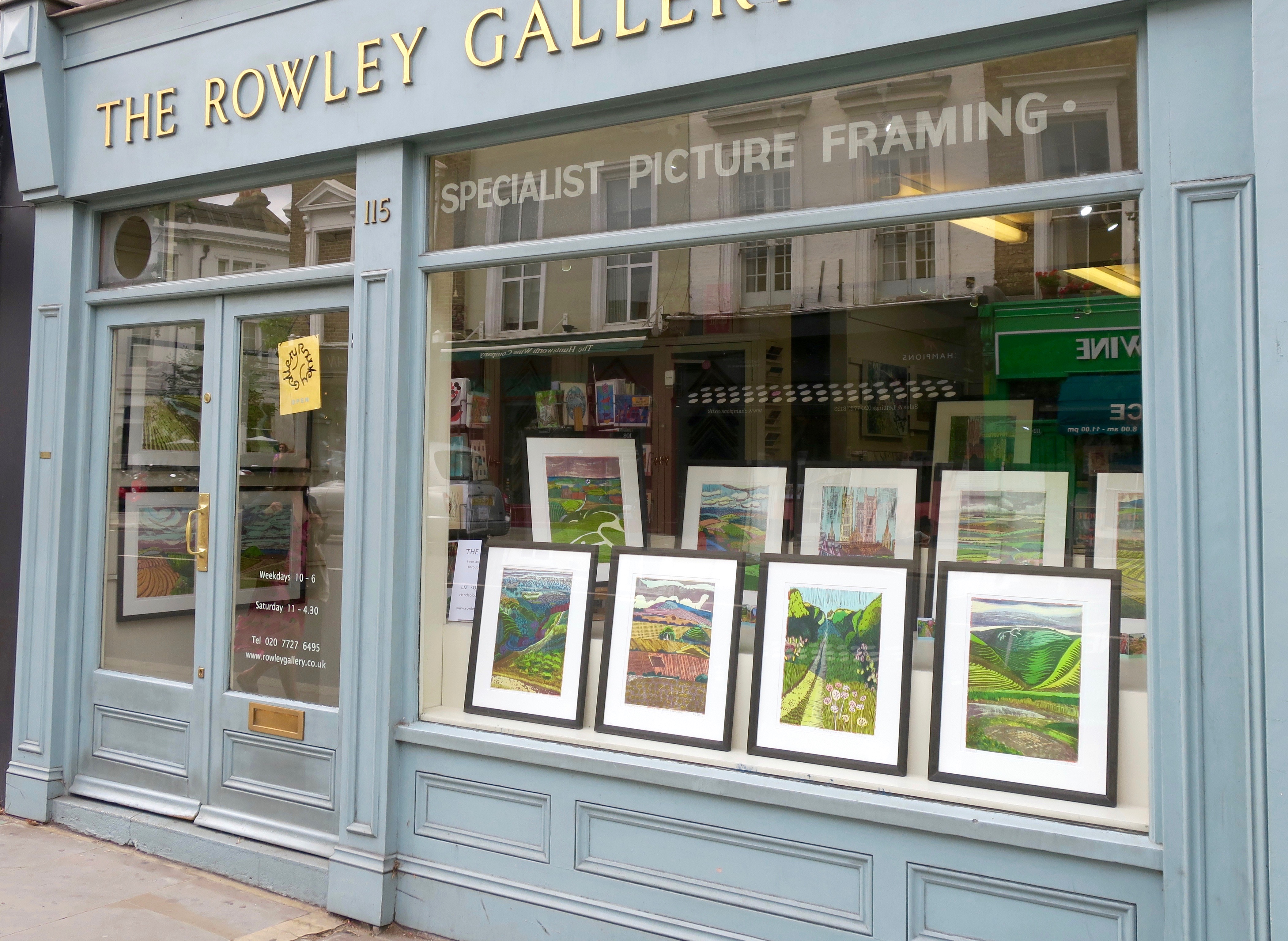 I chose to base the series on ancient ways as I needed a good structure to build on. And also, so that I wouldn’t lose my way (ironically) over the months it took to do them. It gave me a fantastic opportunity to travel and walk about all over the bottom half of England, which was lovely and I realise how small the place is. Secretly, I’d love to be commissioned to do the top half… (and Scotland, Wales, Ireland). I also didn’t take in the name of the ship at the start, which is Spirit of Discovery, so even more appropriate as the series was centred on discovering iconic and the less iconic sites along the way.