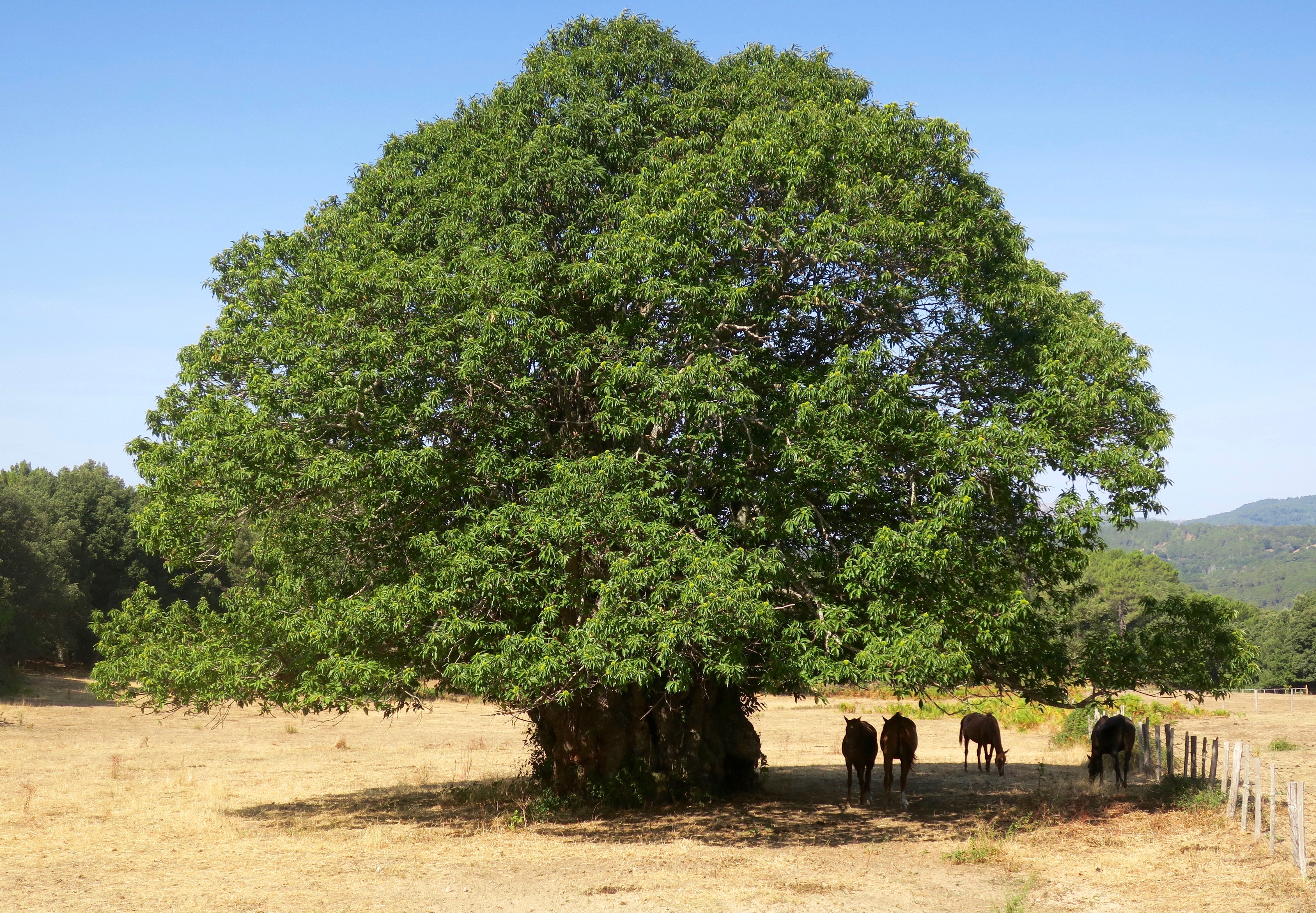 This magnificent sweet chestnut tree stands in a field beside the main road north from Levie on the outskirts of Zonza in Corsica. It is on private property opposite the Hôtel Le Mouflon d’Or, so this was as close as we got. It is featured as a notable tree in the Guide des Arbres Remarquables de France – Le Châtaignier de Zonza: Sur la commune de Zonza, châtaignier de 14 mètres de circonférence qui est très vigoureux. On their website it is listed as Le châtaignier creux de Zonza (the hollow chestnut of Zonza), propriété privée. The horses were fortunate to get so close. 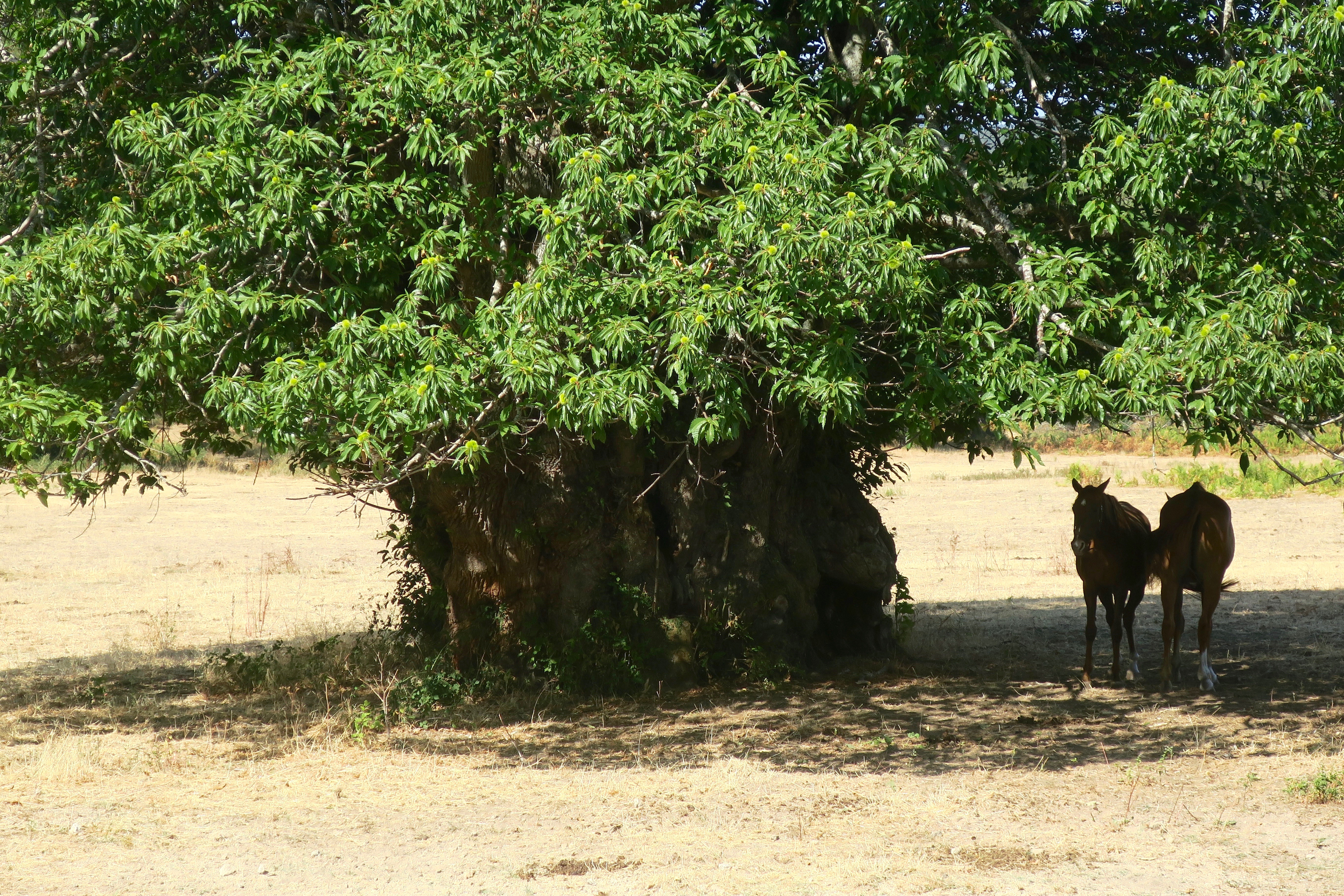 At fourteen metres circumference, that’s 46 feet, it is certainly a substantial and venerable tree. 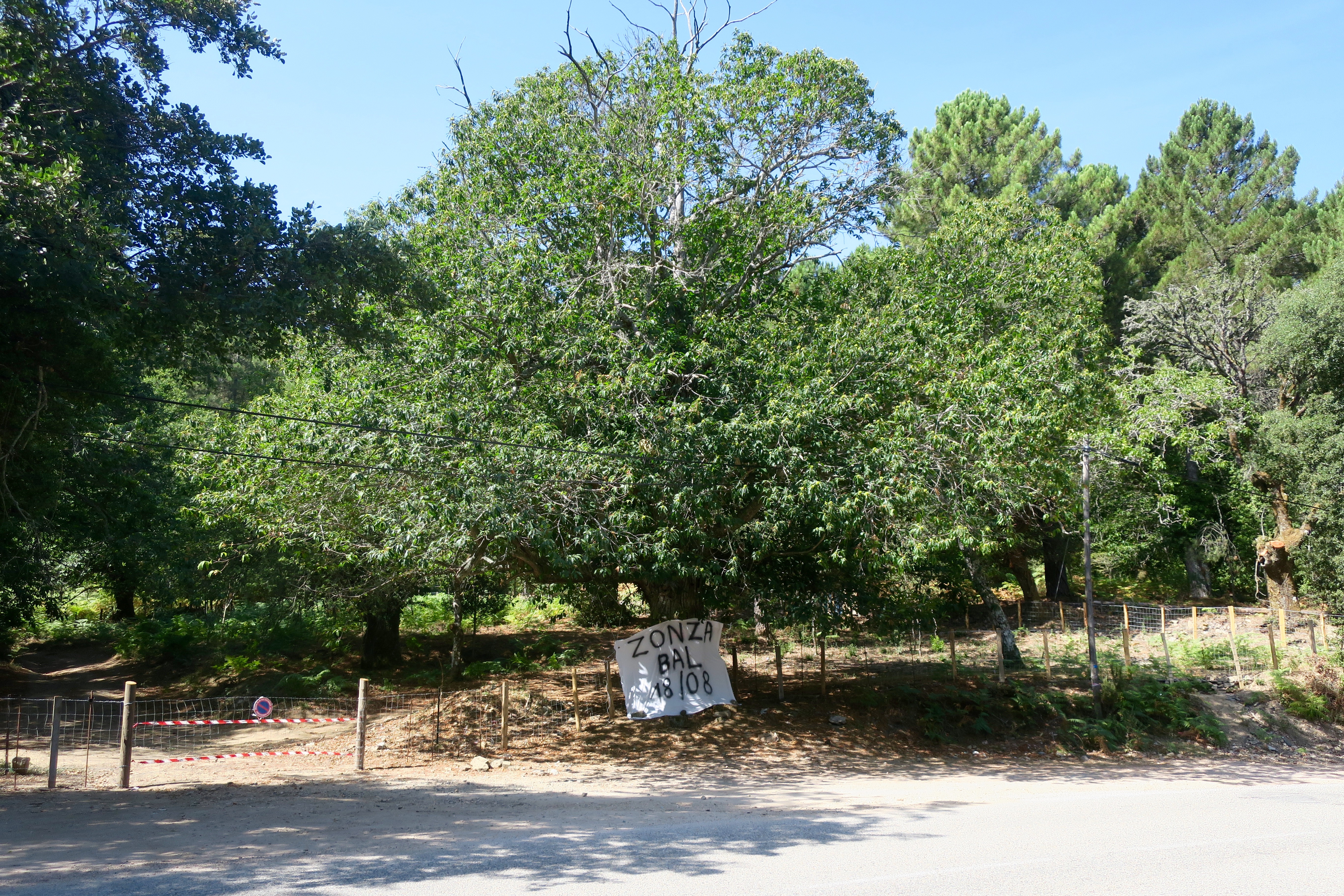 We continued through Zonza on the road towards Bavella, but then pulled over on the first S-bend to go for a walk in the woods. The trees hereabouts are mostly sweet chestnuts and there is said to be one in particular, somewhere in this neck of the woods, that is just as spectacular, maybe even more so than the tantalisingly out-of-reach Châtaignier de Zonza. But where could it be? 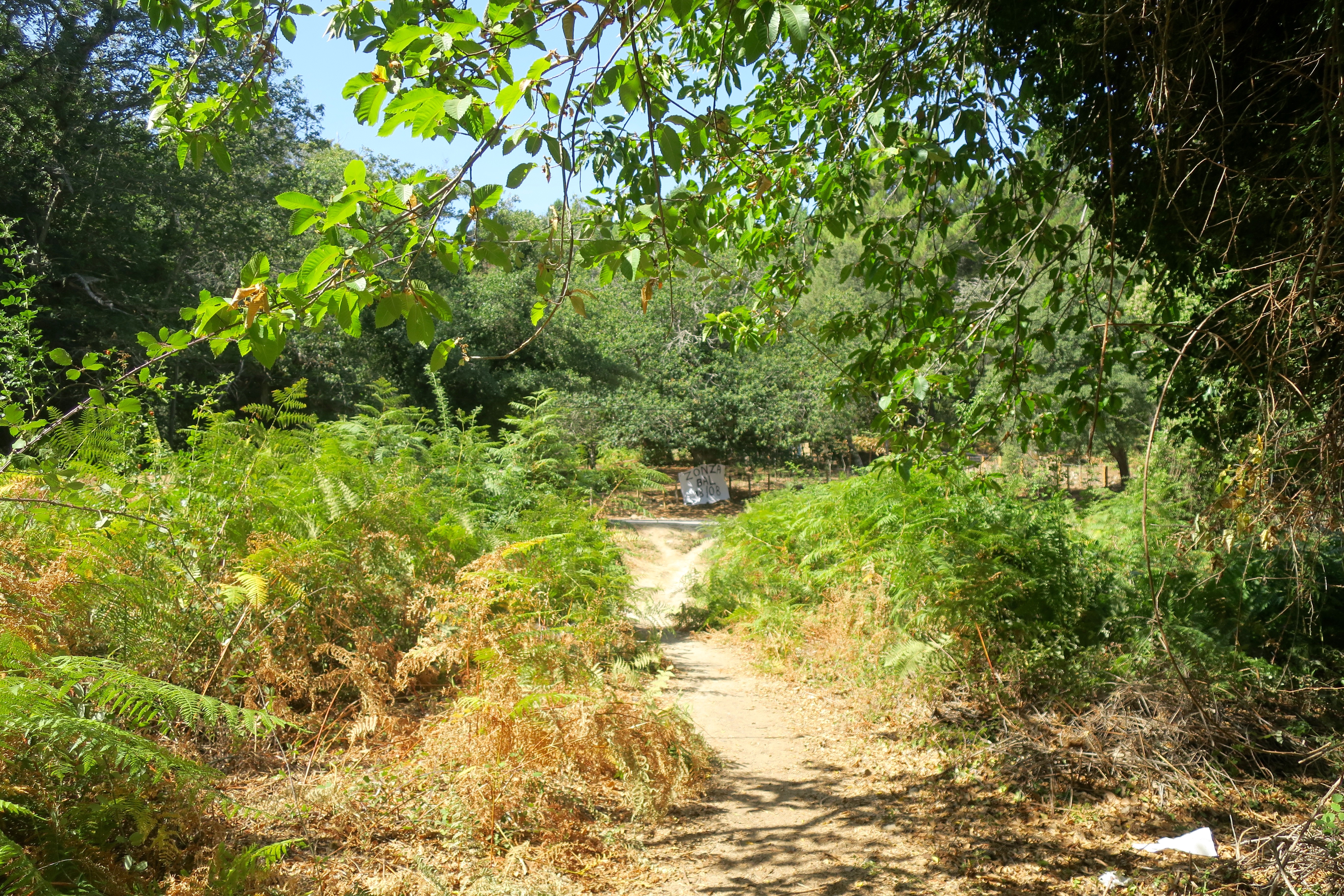 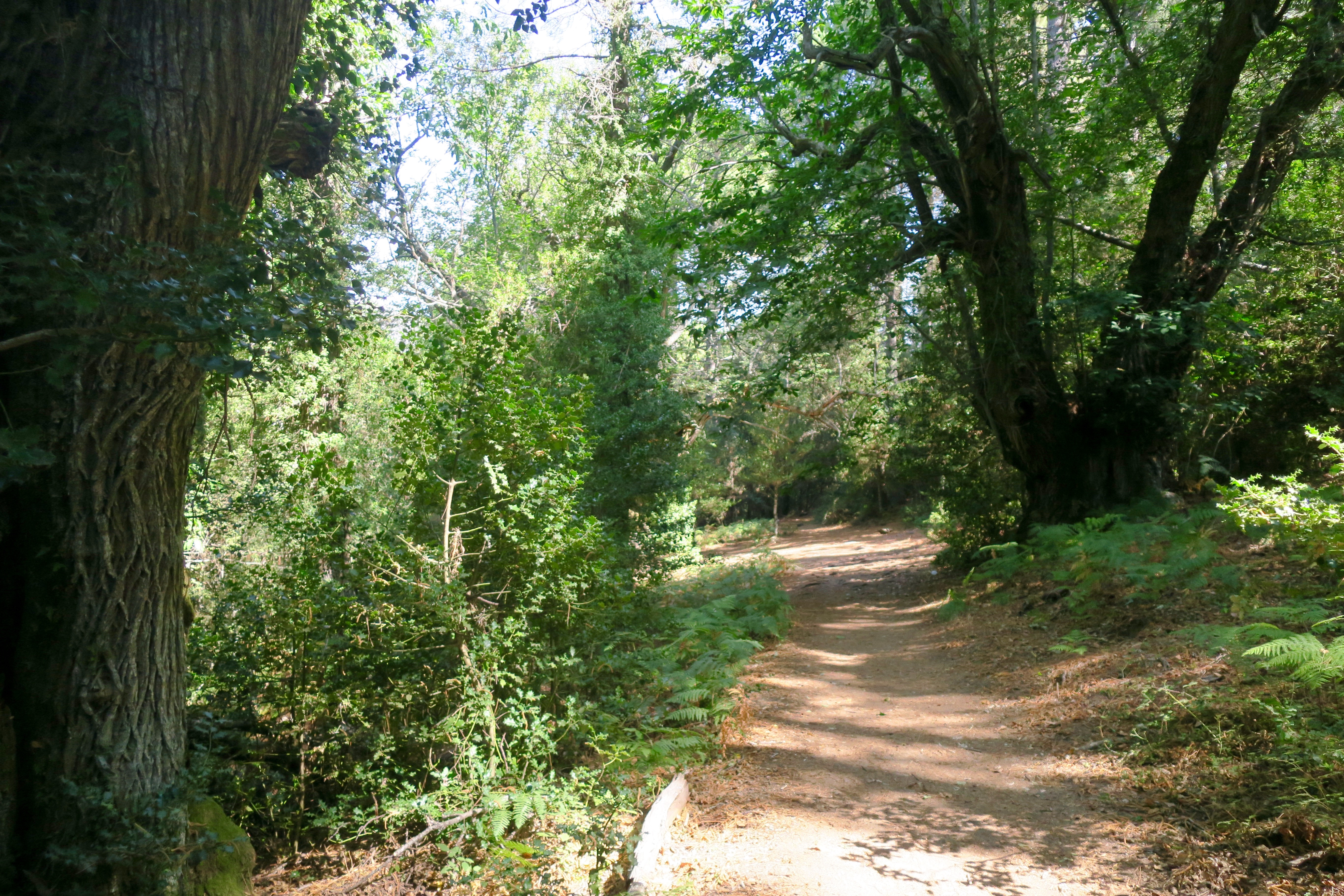 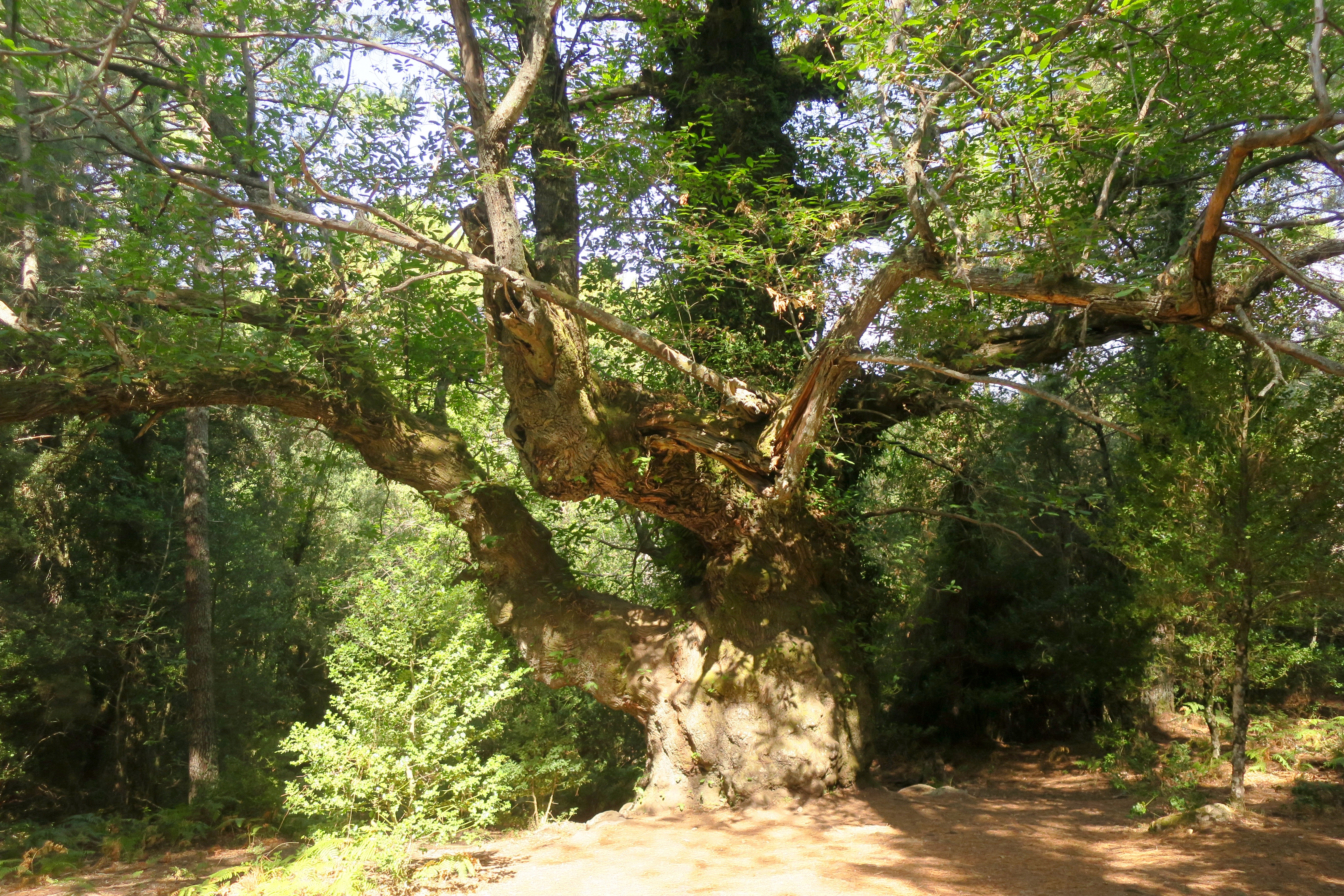 It’s not difficult to find. It stands centre stage, in its own pool of sunlight, waiting to welcome us. A great hulk of a tree, like a ragged, storm-tossed wooden ship with broken masts and tangled rigging. 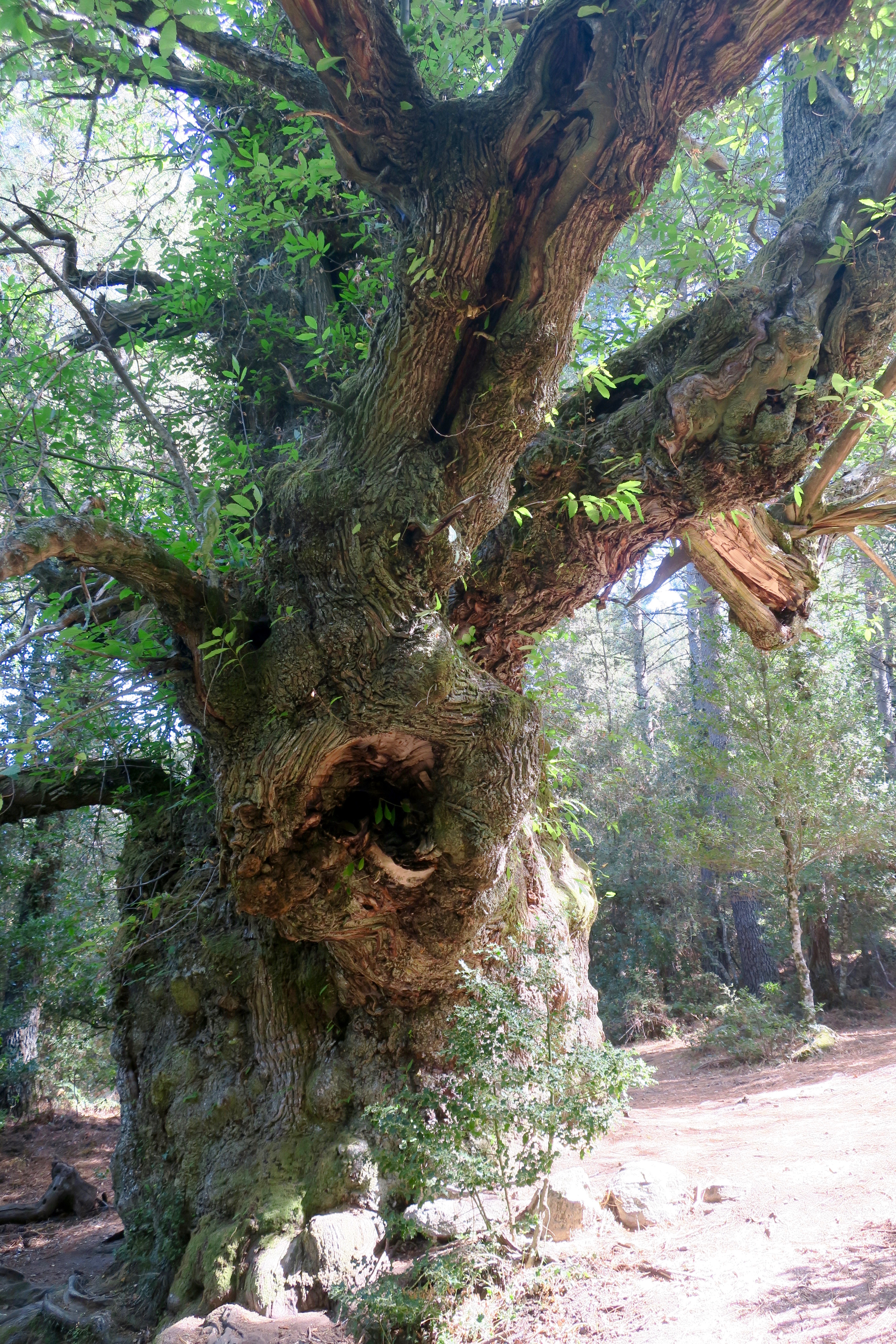 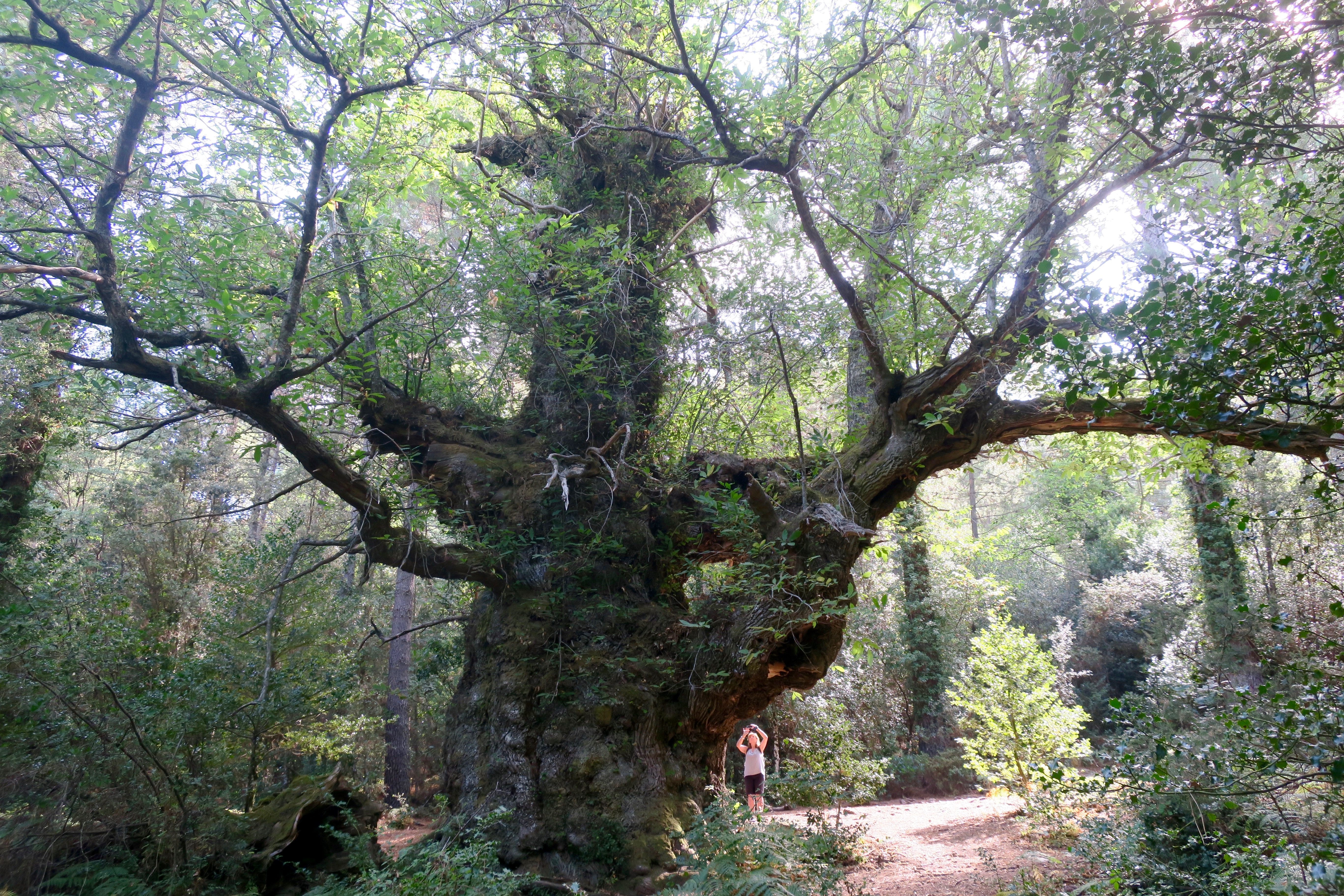 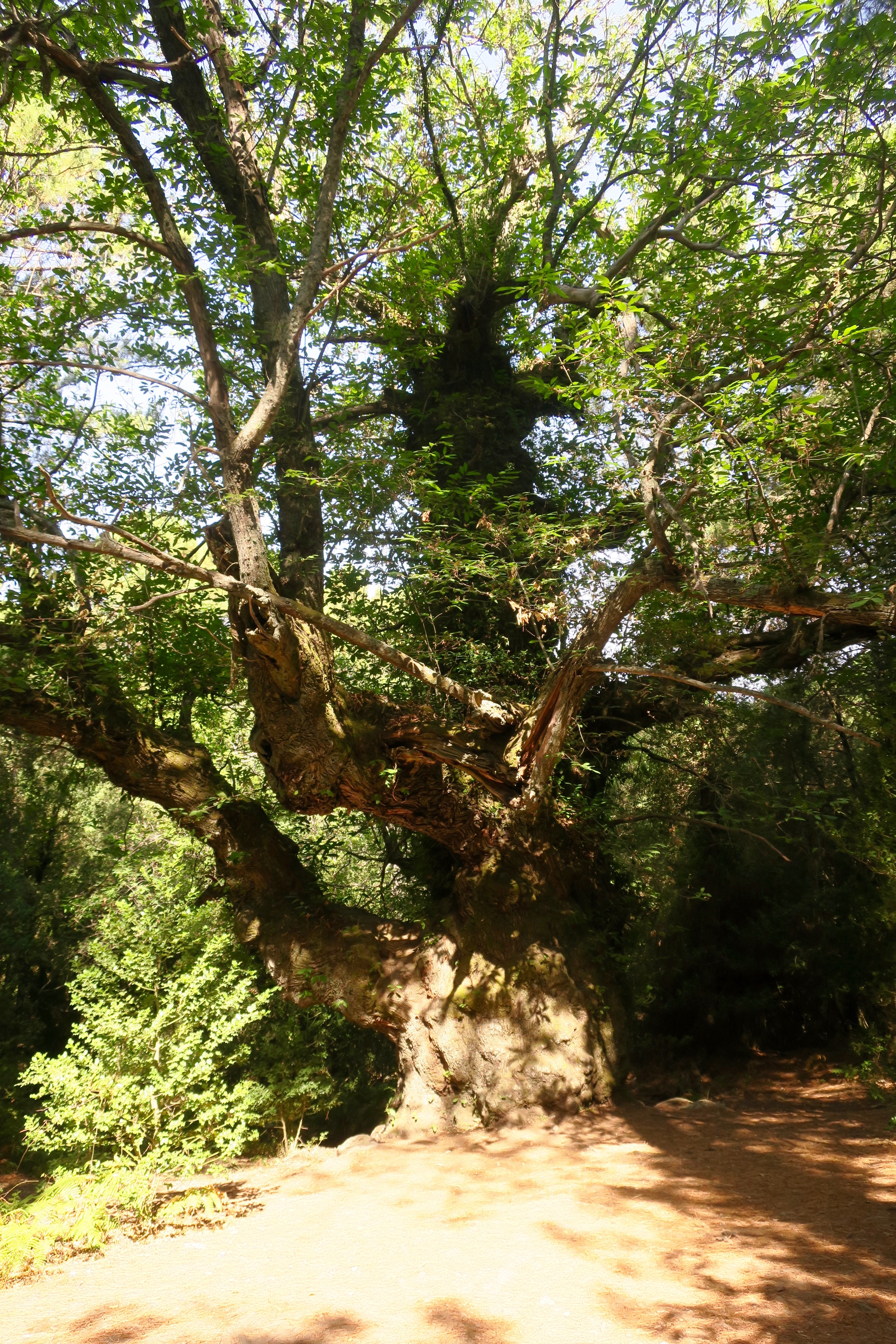 And like the Majesty oak, it has never been pollarded, il n’a jamais été étêté, which I think translates as it has never been beheaded, so it might also be called a maiden sweet chestnut. And at 40 feet its circumference is the same as Majesty’s. It’s another majestic example of time condensed and time embodied and time renewed and time shared. It’s good company and it’s time well spent. 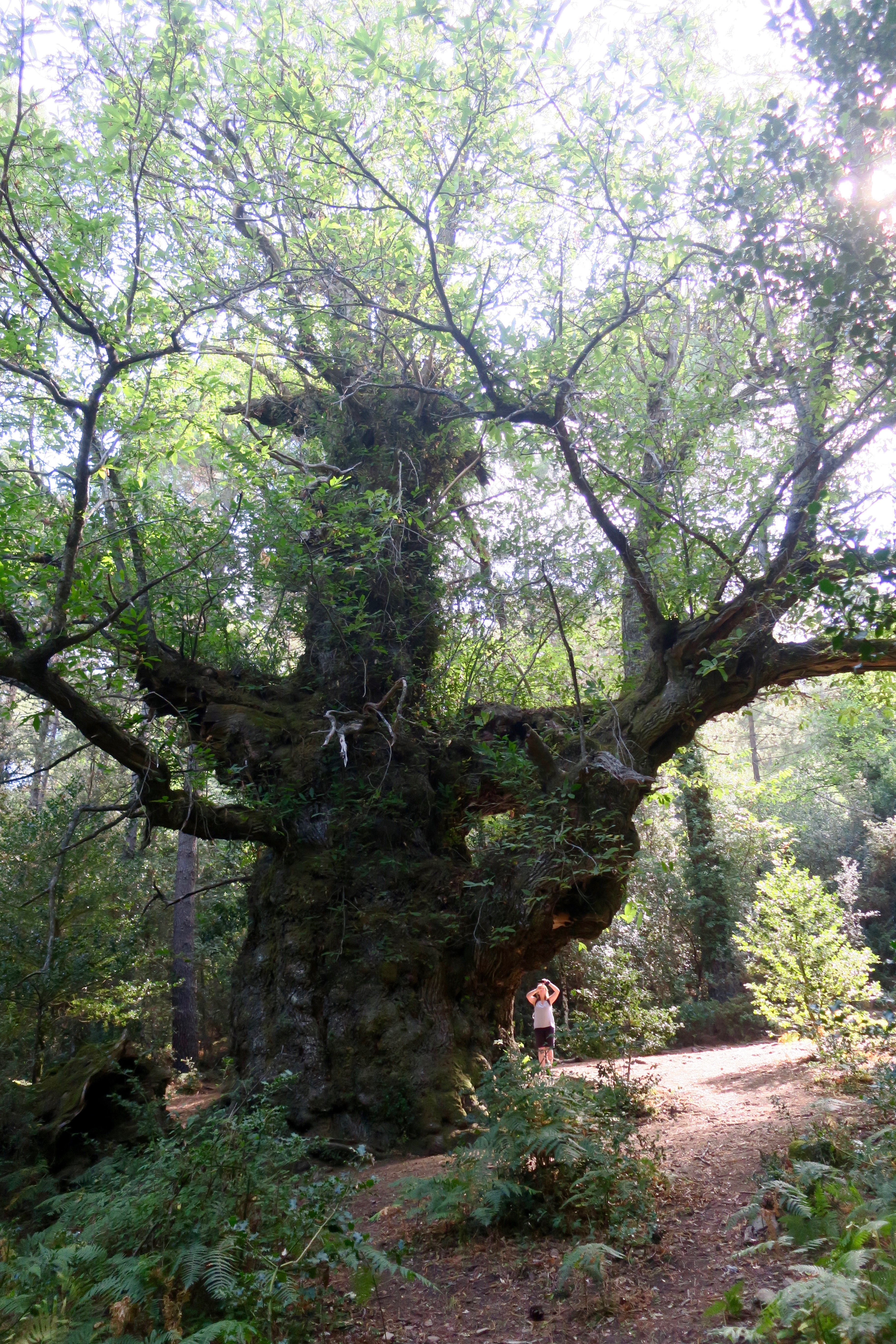 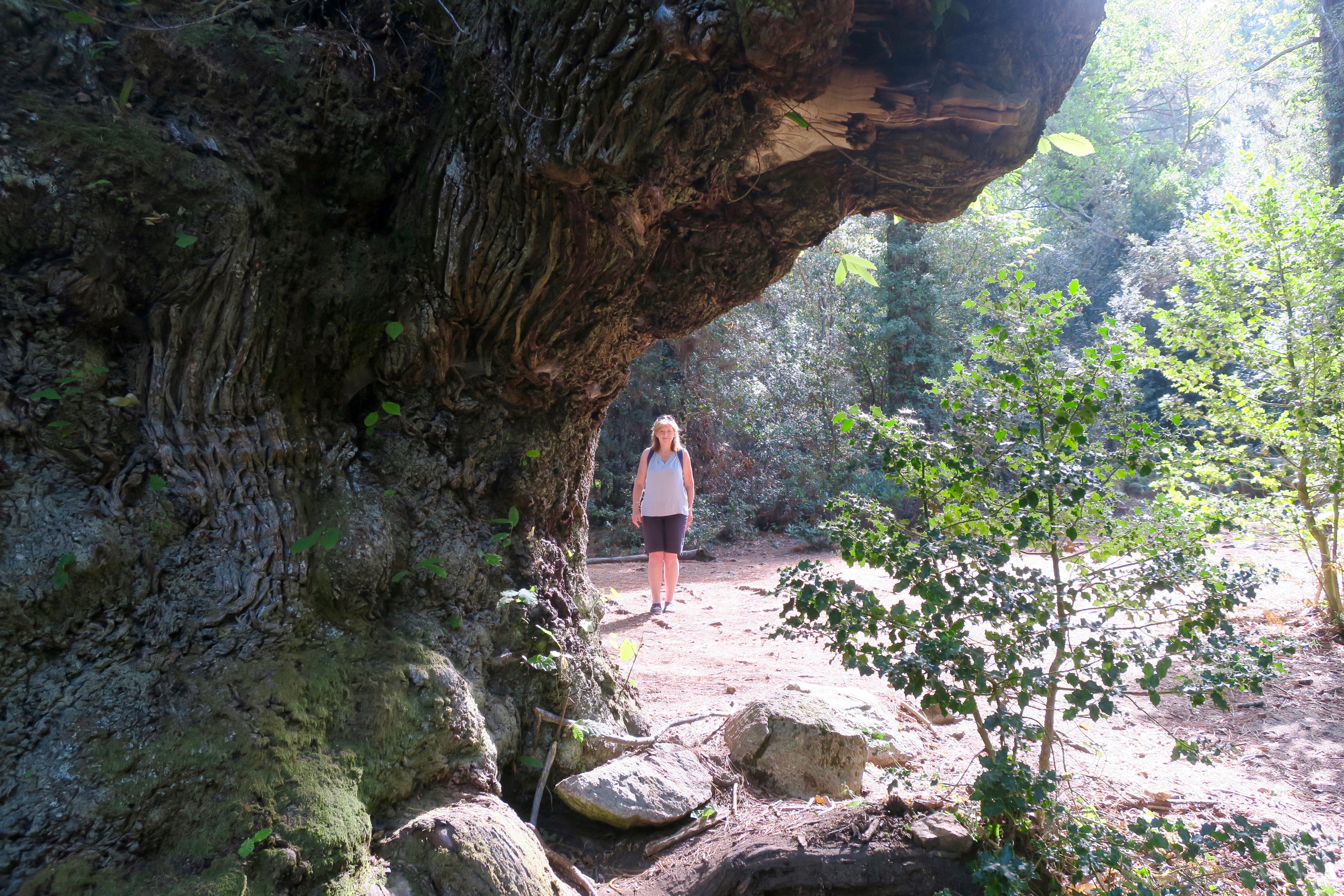 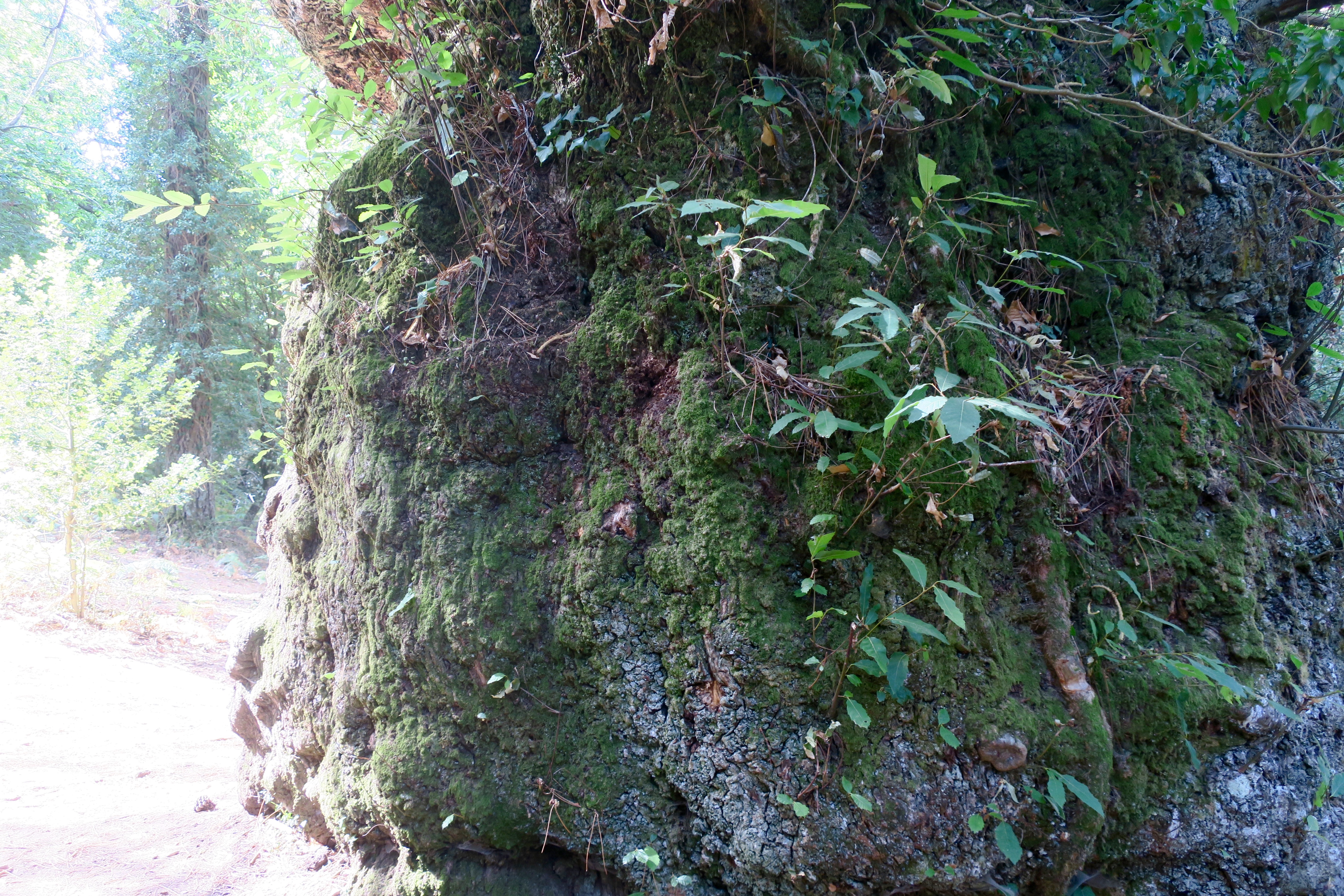 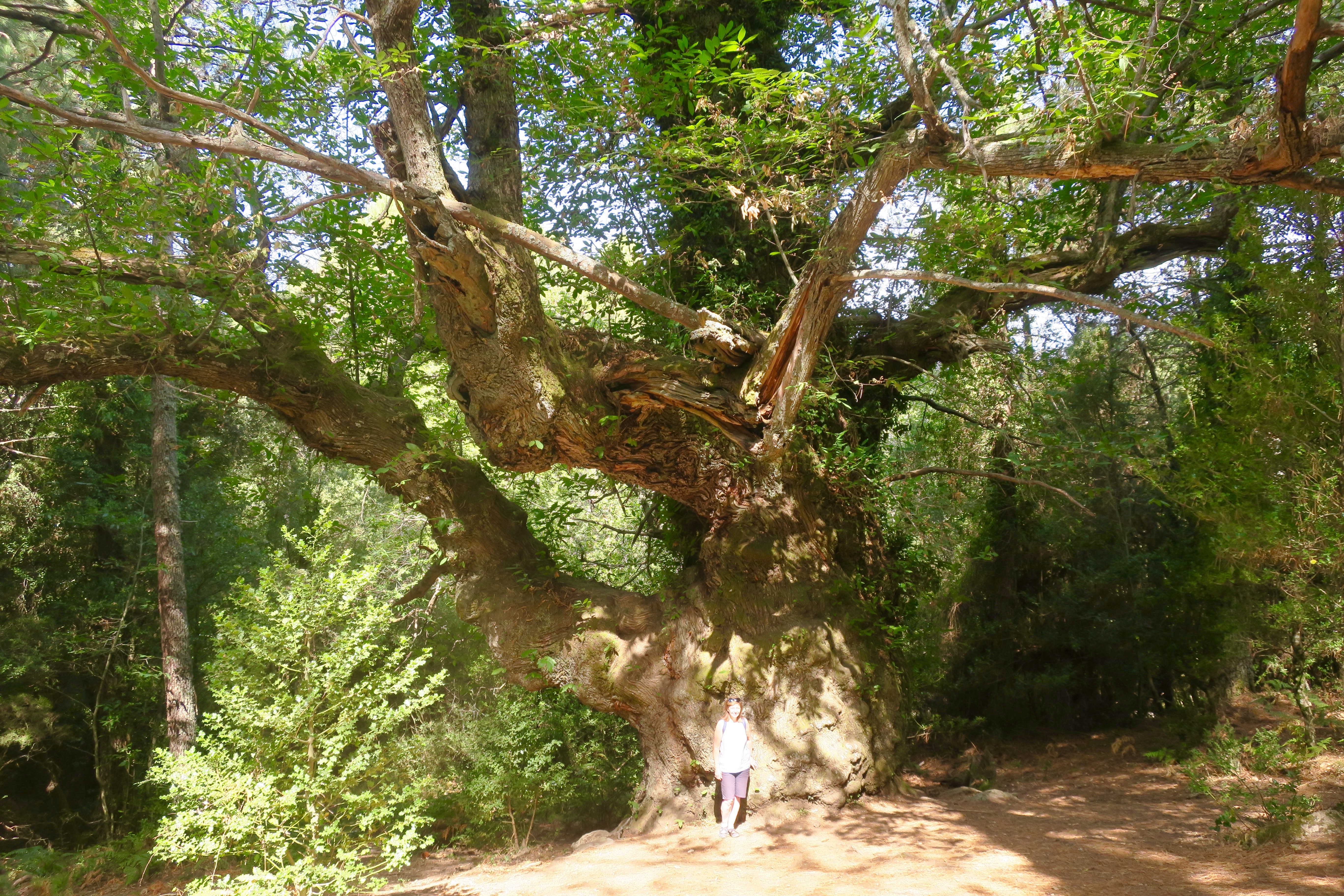 We’re drawn in to its embrace, absorbed by its dappled shadows and light, they cast an ancient spell. Its a magical space, the time it took to make this tree plotted by the tracks of its years to here and now, mapped by the historical chart of its branches. We’re entranced and enmeshed and caught in its web. 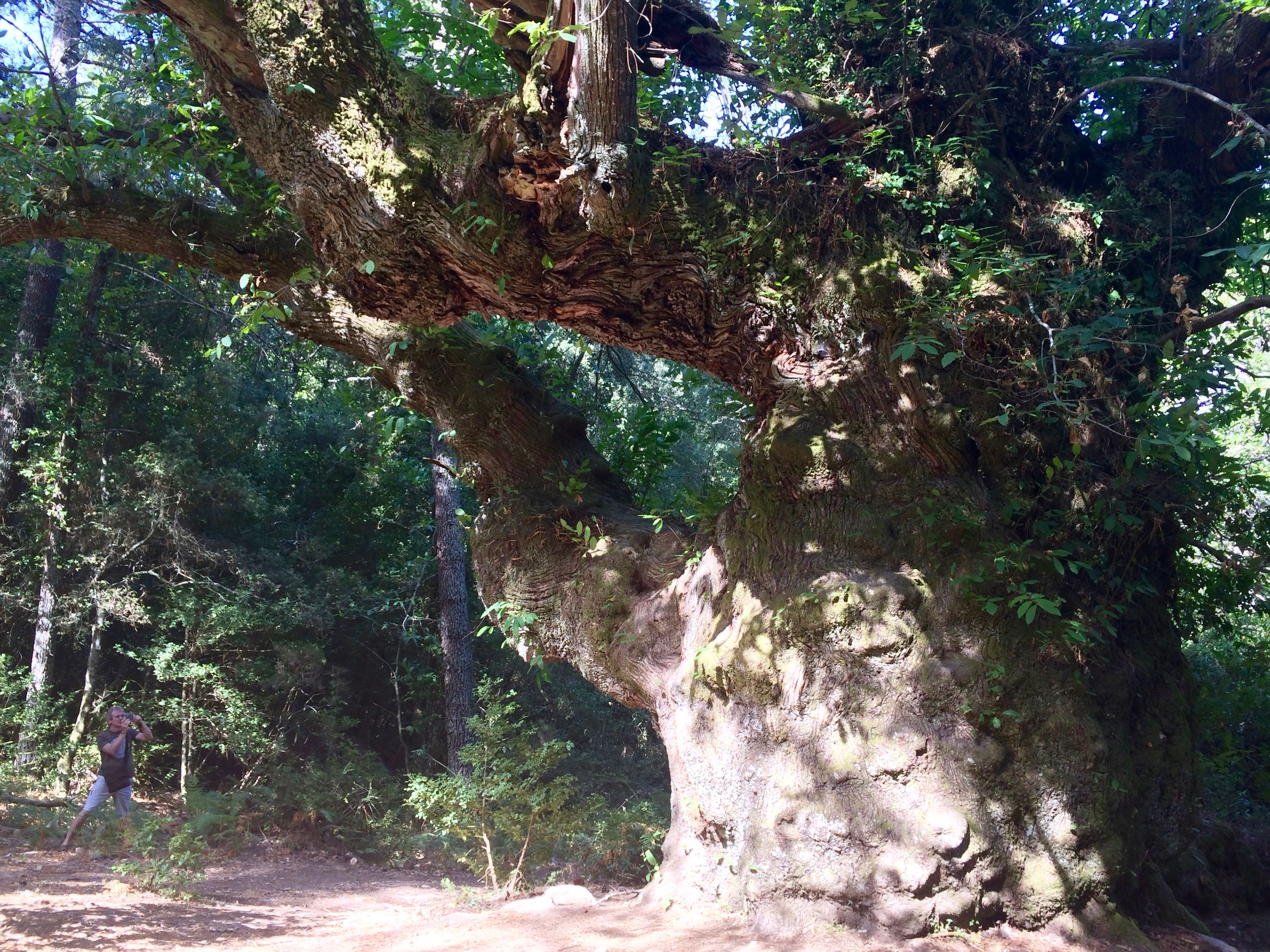 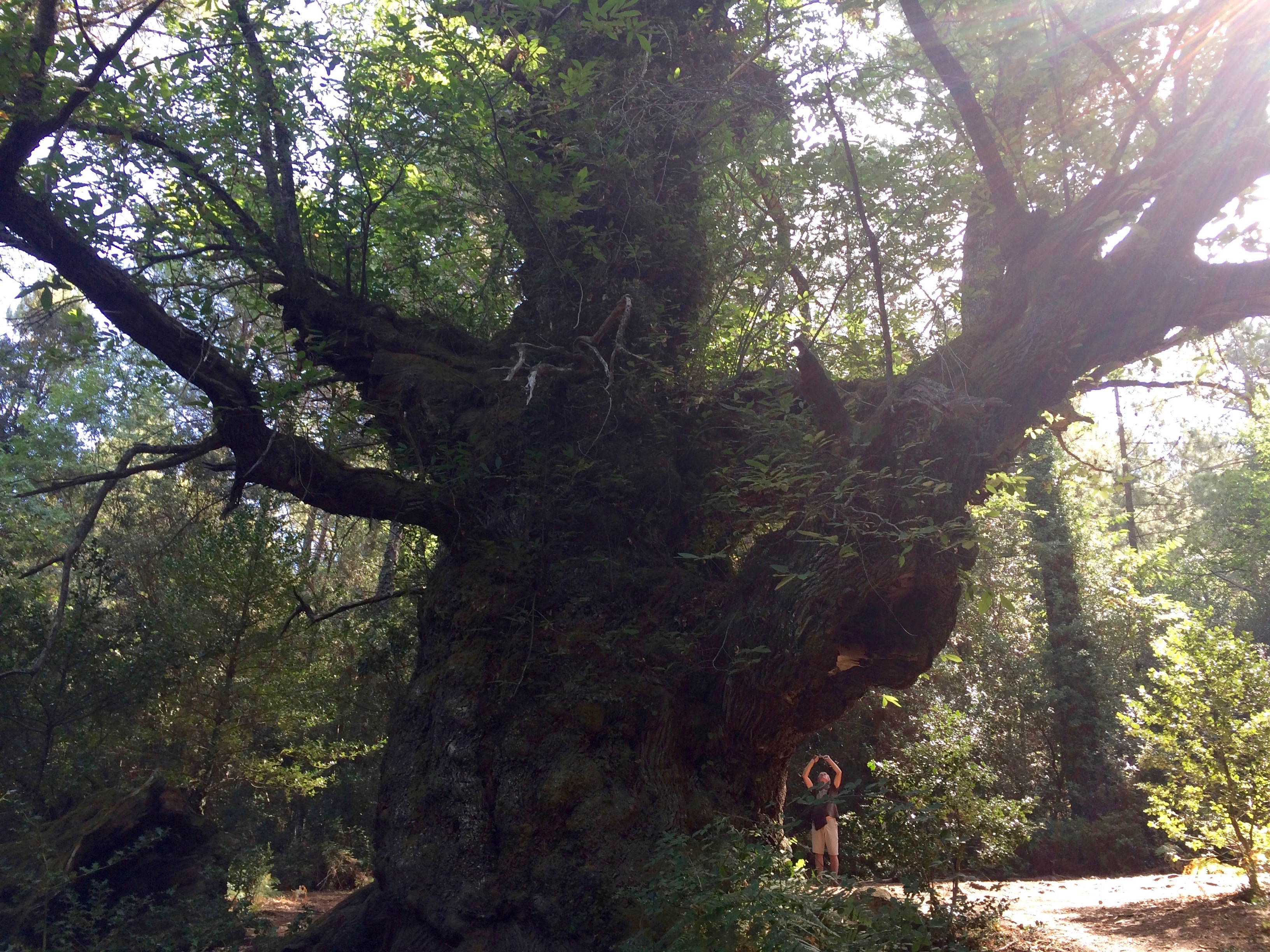 This massive stem, gradually exuded from the earth over many centuries, stands like a great wooden cliff-face bedecked with leaves and mosses and lichens. And every year it restores the earth with a wealth of fruits. Some will be reborn and grow again but many will be consumed. 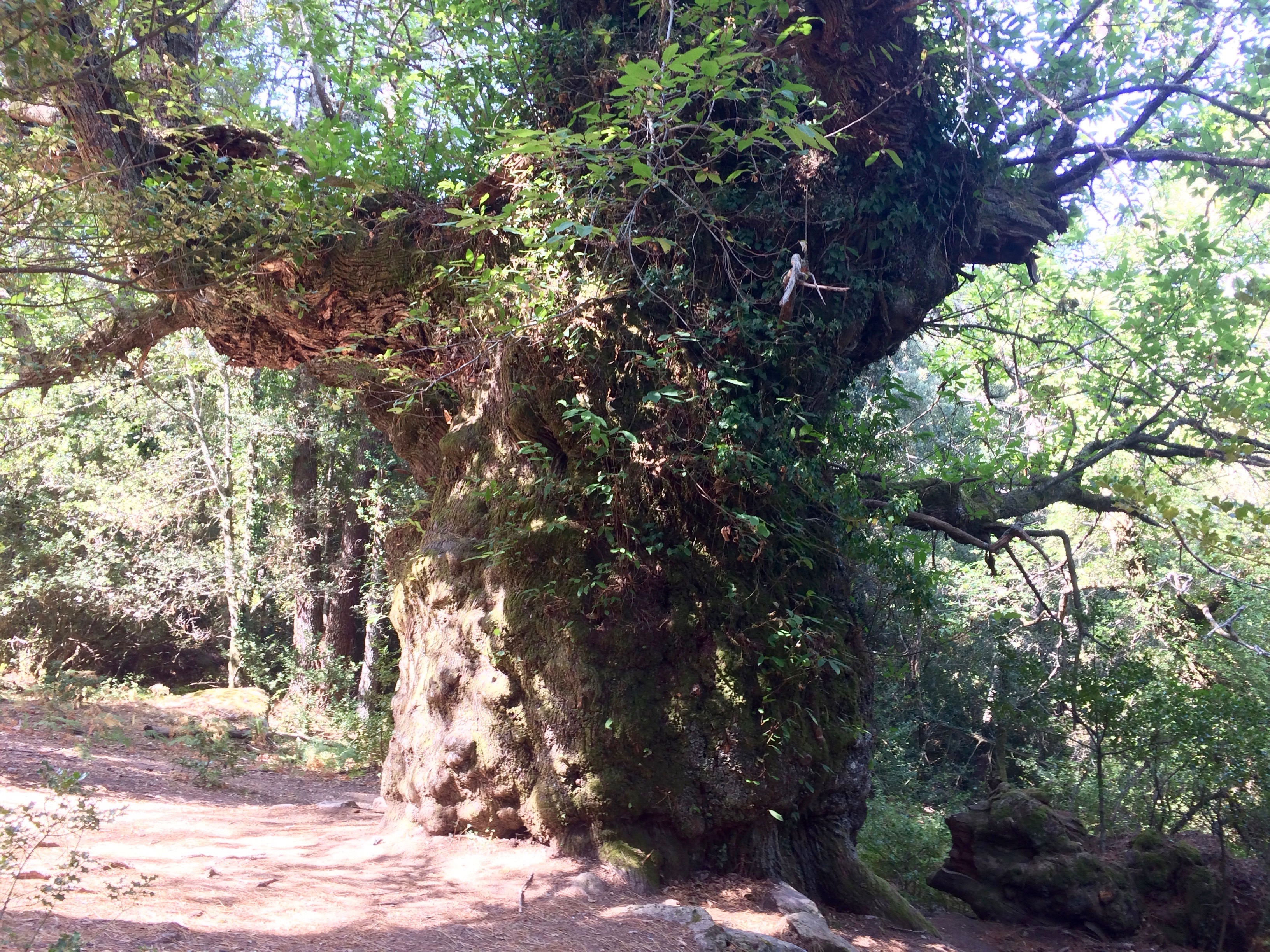 Large-scale cultivation of the chestnut tree was introduced in Corsica during the Genoese domination. Rich in calories, the fruits were plucked (without gloves) and dried, and placed on a wooden grating (Corsican: a grata) above a fire (Corsican: u fucone) for one month: this fire, placed on a dry clay base 1 m² wide and 20 cm thick, smokes also the charcuterie and heats the house. After that, they are ground to produce chestnut flour, which gets an unmistakable smoke flavour from this process. The unplucked chestnuts are eaten by the pigs foraging in the forest. These are additionally fed with chestnut flour, so that their meat acquires a characteristic taste. Used to prepare polenta (Corsican: pulenta, pulenda) and cakes, this flour was the basic staple food for the Corsican. The importance of chestnut in Corsican life can be argued from the fact that during a traditional wedding lunch taking place in 19th century Castagniccia, not less than 22 different courses were prepared using chestnuts as main ingredient. Today chestnut flour is a French AOC and a European AOP, under the name “Farine de châtaigne corse-Farina castagnina corsa”.

At the end of 20th century, 85% (1,200 t) of the chestnuts plucked in Corsica were transformed in flour, a unique case among all the French departments. The 300 t of flour so obtained were consumed almost totally in Corsica, a small part was exported to mainland France and bought by the Corsicans of diaspora.

Chestnut and its products are the centrepiece of two yearly fairs in Corsica: A Fiera di a Castagna in Bocognano, which takes place at the beginning of December and the Fête du Marron occurring at Évisa at the end of November.

A Corsican specialty is the chestnut beer (biera accumudata cu a castagna), brewed since 1996 by the Pietra Brewery. Pietra beer is a 6% ABV amber beer, brewed from a mix of malt and chestnut flour. The annual production in 2006 amounted to over 25,000 hectolitres, exported also to mainland France. 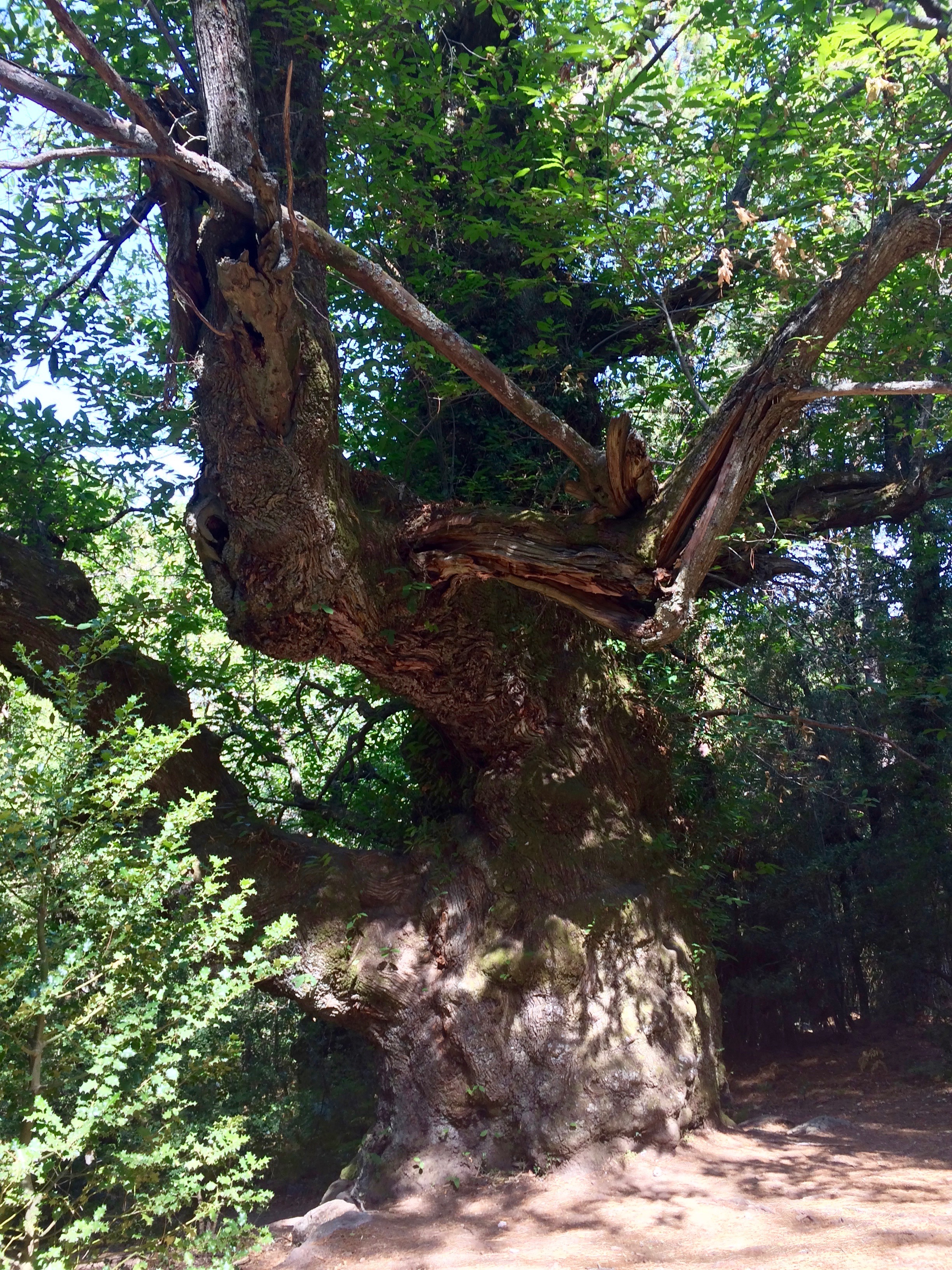 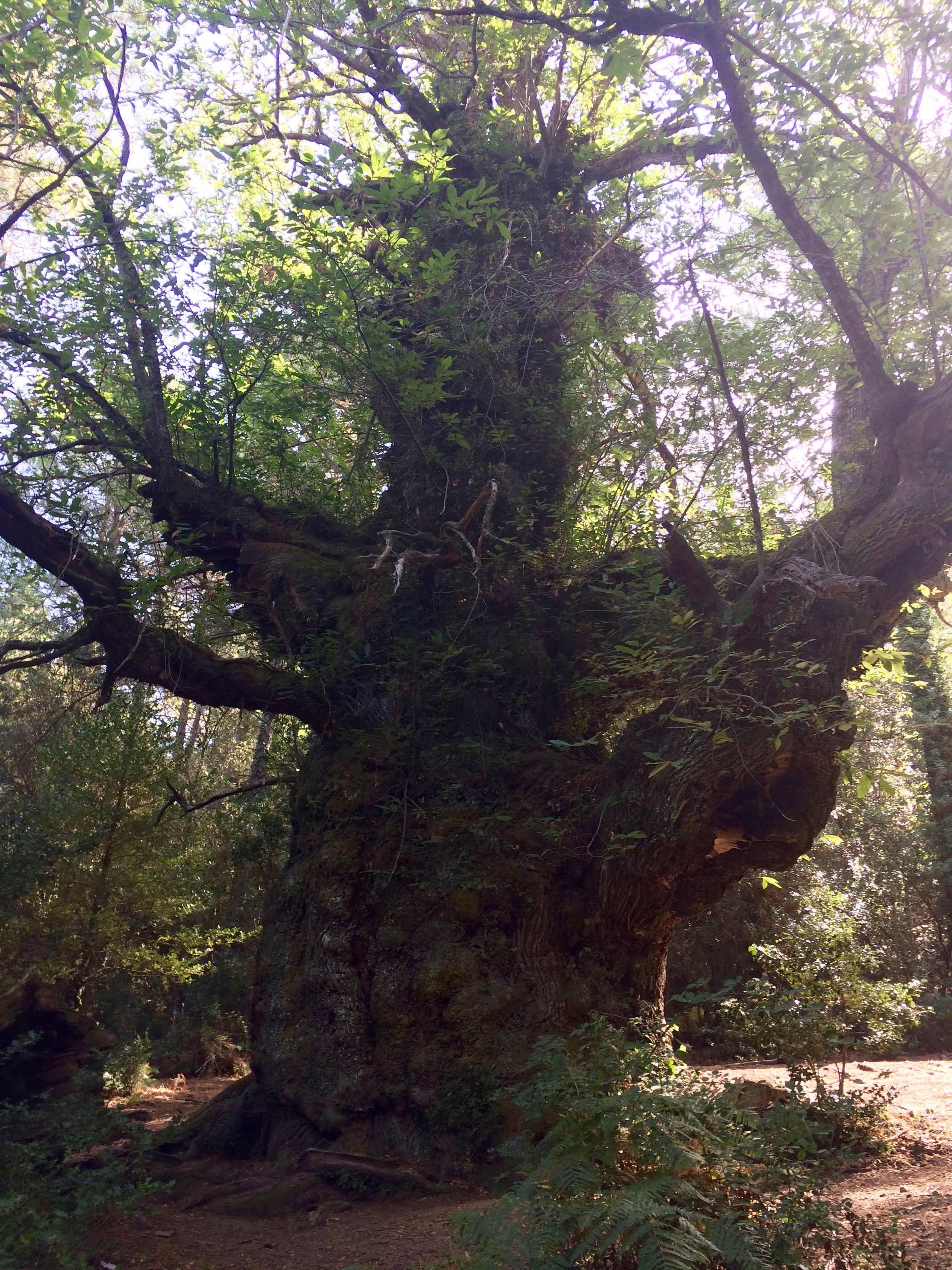 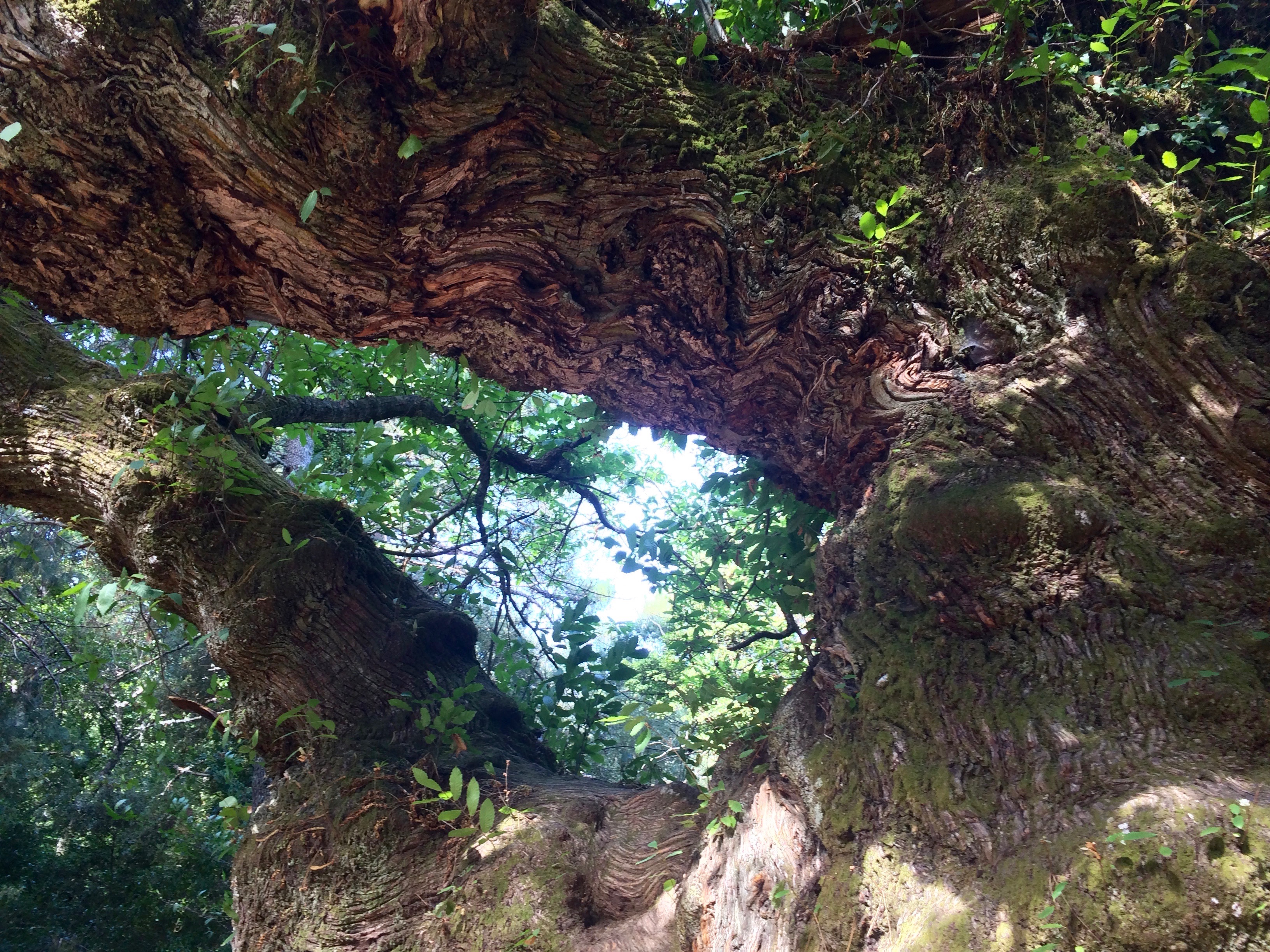 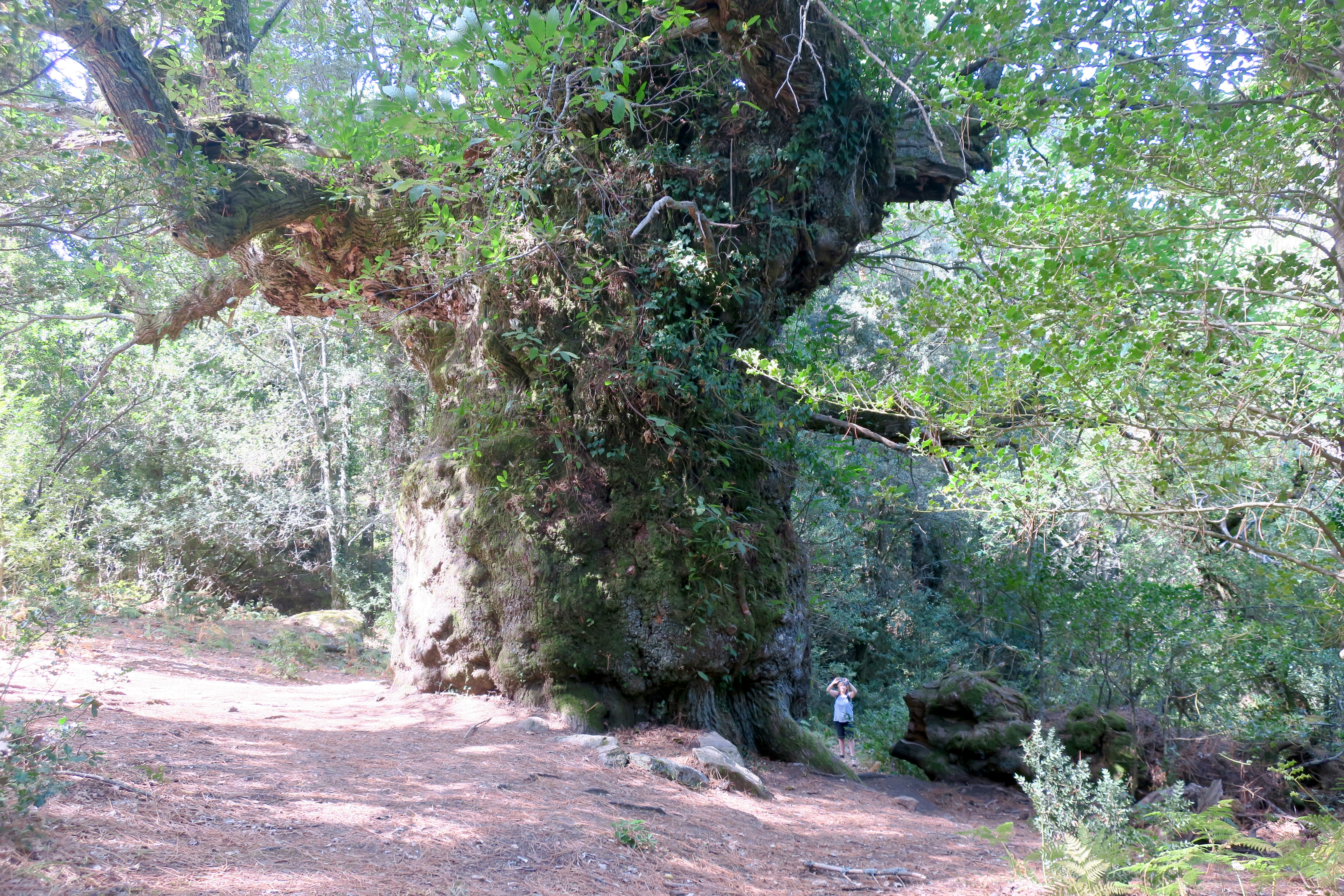 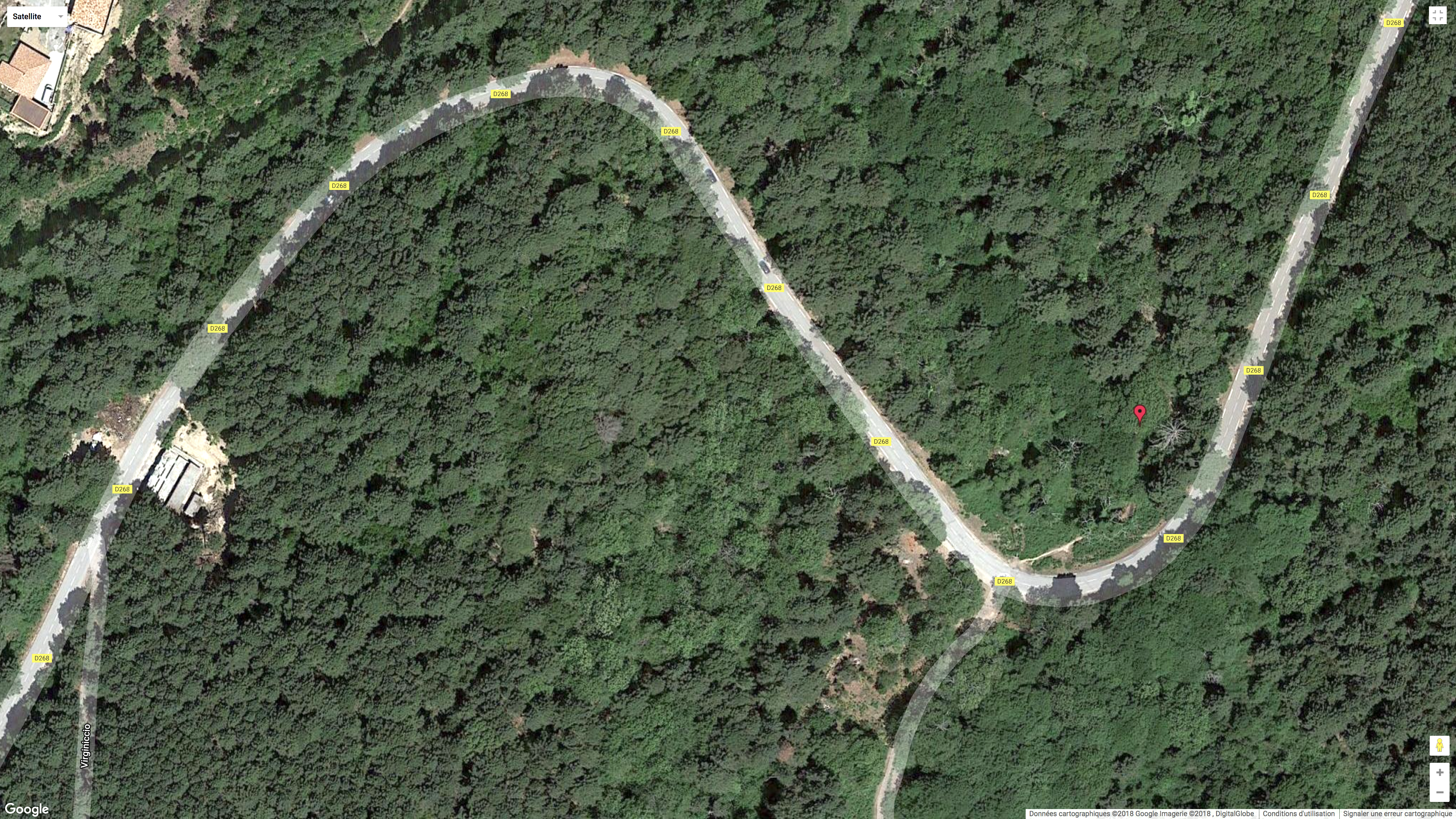