Five years after its first performance I finally got to see Sutra last week at Sadler’s Wells. It was worth waiting for. It’s an intense, concentrated burst of energy. 20 Kung-Fu monks behaving like curious cats in an exuberent exploration of the ins and outs of boxes. It opens with a ‘choreographer’ (down right) describing a moving line by hand over miniature boxes whilst a monk (centre stage) dances the same line over full size boxes. This duality continues throughout the performance, playing with ideas of thought/action, self/other, inner/outer, micro/macro… 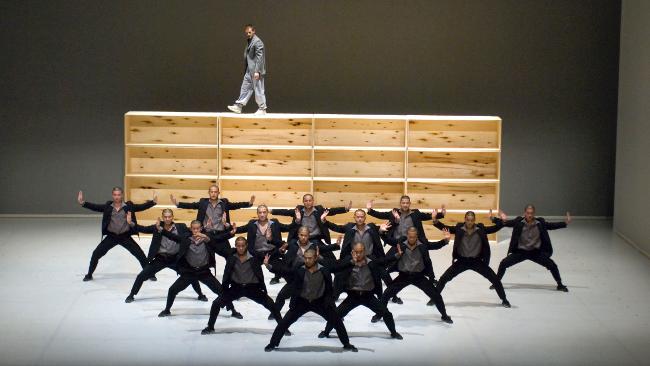 The boxes are an integral part of the dance. They are ingenious building blocks. They are carried, dragged, slid and stacked to build walls and toppled dramatically like dominoes. Clustered together they become a labyrinth. They can be coffins, baths, beds, boats, shelves, pedestals, frames. It’s a joy to watch as the dancers exploit them, are encapsulated by them, escape from them, dance with them. 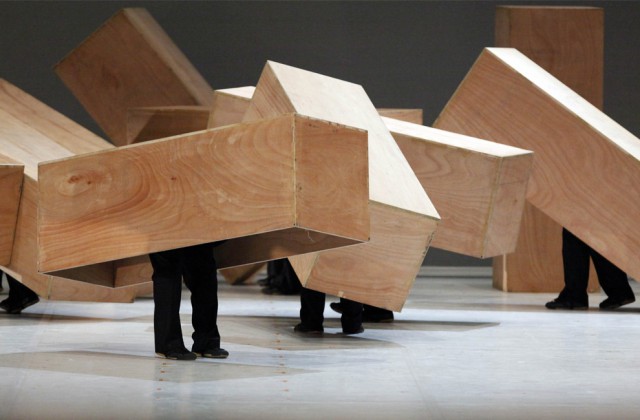 Celebrated Flemish/Moroccan choreographer Sidi Larbi Cherkaoui presents a brand new dance work inspired by the skill, strength and spirituality of Buddhist Shaolin monks. He has collaborated closely with Turner Prize-winning artist Antony Gormley, who has created a design consisting of 21 wooden boxes which are repositioned to create a striking, ever changing on-stage environment. Polish composer Szymon Brzóska has created a beautiful brand new score for piano, percussion and strings which is played live.

The monks performing in Sutra are directly from the original Shaolin Temple, situated near Dengfeng City in the Henan Province of China and established in 495AD by monks originating from India. In 1983 the State Council defined the Shaolin Temple as the key national Buddhist Temple. The monks follow a strict Buddhist doctrine, of which Kung-Fu & Tai Chi martial arts are an integral part of their daily regime. By visiting the Shaolin Temple in China, and working with the Shaolin monks over several months, Sidi Larbi follows a life-long interest of exploring the philosophy and faith behind the Shaolin tradition, its relationship with Kung-Fu, and its position within a contemporary context. 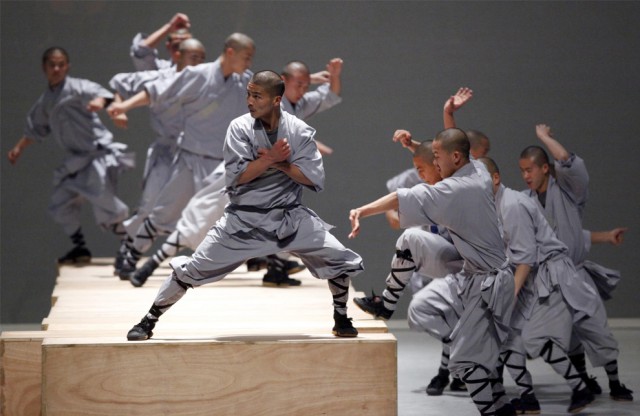 The Shaolin monks put on a five-star performance just by being themselves. It’s not just the collective virtuosity of their kung fu heritage – their flying kicks, their backflips, their shadow-boxing. Practised as part of the monks’ spiritual discipline, these maniacally dangerous and beautiful moves also carry the aura of compelling ritual.

For those expecting straight physical fireworks, the opening minutes may seem muted. On a stage lined with coffin-sized wooden boxes, Cherkaoui and 11-year-old Shi Yandong sit and face each other. Cherkaoui gestures delicately to the boy, as if trying to communicate in sign language. Then the adult monks rise out of the boxes; as each performs a tiny vignette of martial-arts brilliance, they seem to come from a very alien world.

These are the two threads that run through Sutra: Cherkaoui, a fascinated, interrogative westerner trying to find a way into the monks’ culture, and the enchantingly alert, fearless little Yandong, who leads him on his quest. Their journey is a maze of episodic dance stories, each revealing the monks in a different aspect. The stacked boxes, conceived and designed by Gormley, are both functional and miraculous. They can be arranged to resemble the petals of a lotus flower, upon which Yandong sits like a little Buddha, or they can be upended to become a forest of skyscrapers, upon which the monks stand gazing as if on their first trip to the city.

Brzóska’s music gives each episode extra emotional colour and gathers the work to its powerful conclusion. Cherkaoui, having choreographed the monks into a climactic ensemble, also reaches the end of his quest, his pale, supple, questioning body finally dancing confidently among them.

It is not just Cherkaoui who has made the journey: the audience, too, gain some kind of privileged intimacy with the monks. This unique, profoundly imagined work takes the concept of cultural exchange to a new level. 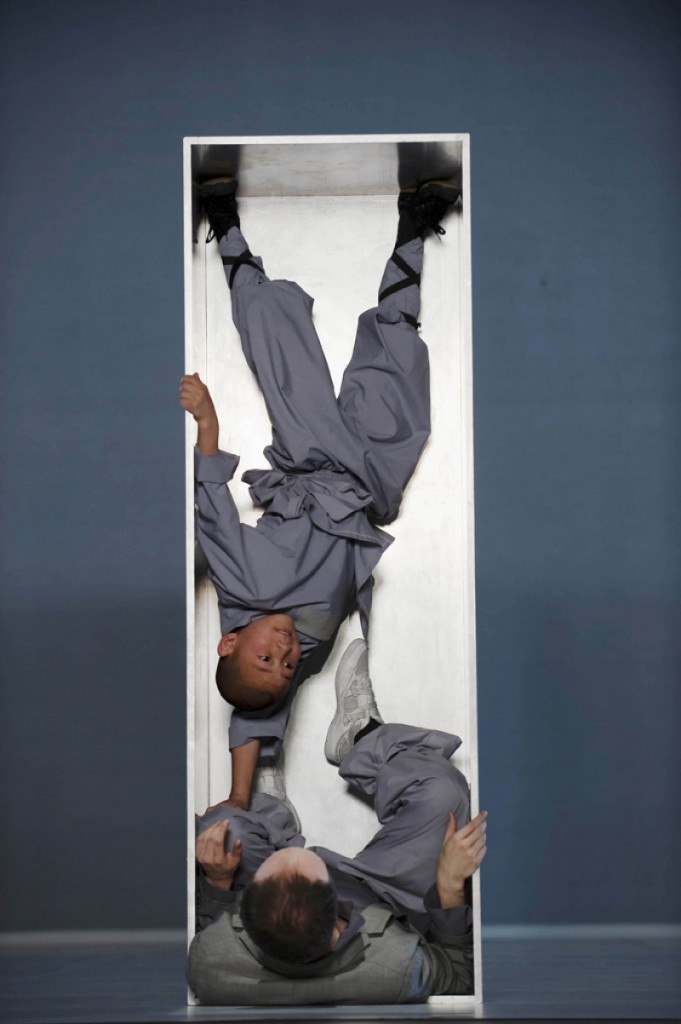 Antony Gormley’s boxes were the perfect props to elicit wonderful choreography and amazing performances. It seemed a true collaboration. There were fantastic, high energy acrobatics but also lots of laughs. There were unrestrained cheers and whoops of delight at the end and a five minute ovation as the boisterous monks turned cartwheels and somersaults across the stage while the musicians bowed courteously. My hands were hot with applause.