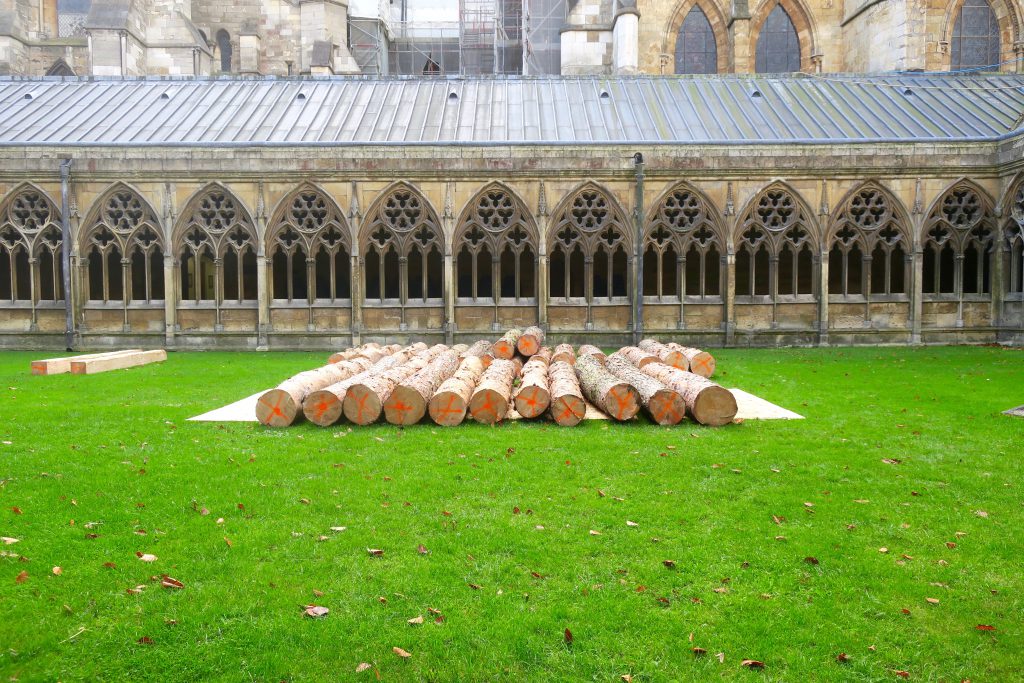 During our visit to Lincoln Cathedral we witnessed an elegant performance commemorating the 800th anniversary of the 1217 Charter of the Forest. Logs of Scots pine were transformed into wooden beams by a group of hewers in the cathedral’s Chapter House, in a spectacular ritual lasting ten days that explored the dramatic, acoustic, material and olfactory qualities of the space. 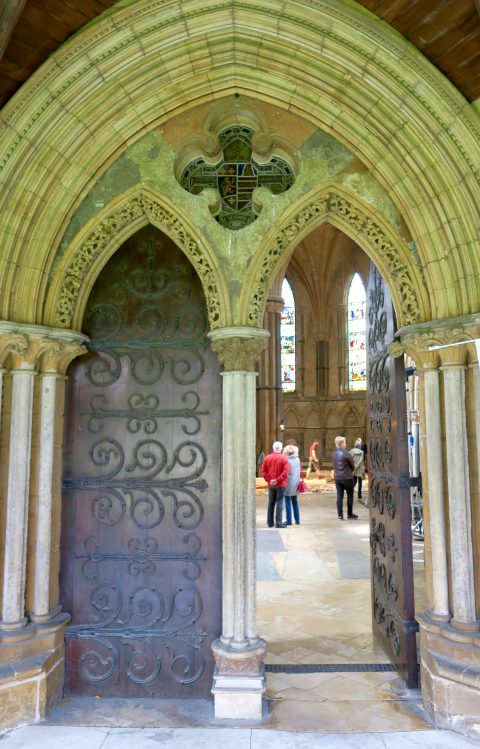 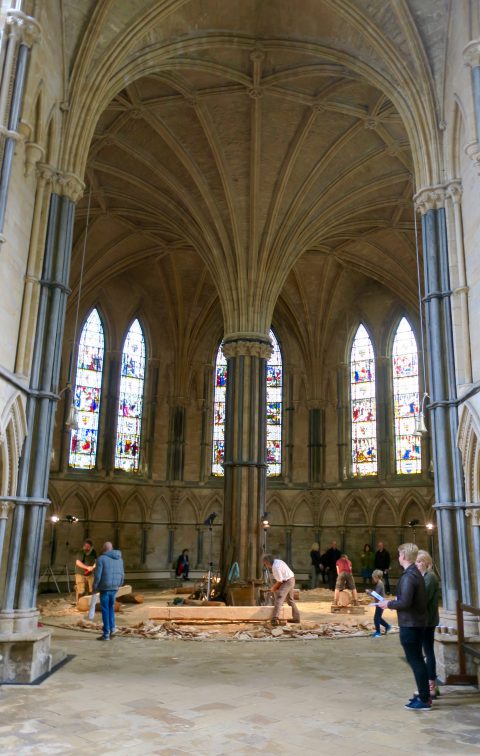 The Chapter House was a theatre, filled with the scent of pine resin and the steady rhythmic echo of axe blades on wood. It was also a workshop where forest timber was processed into the material that had once been used to build the extraordinary structure hidden above its vaulted masonry ceiling. 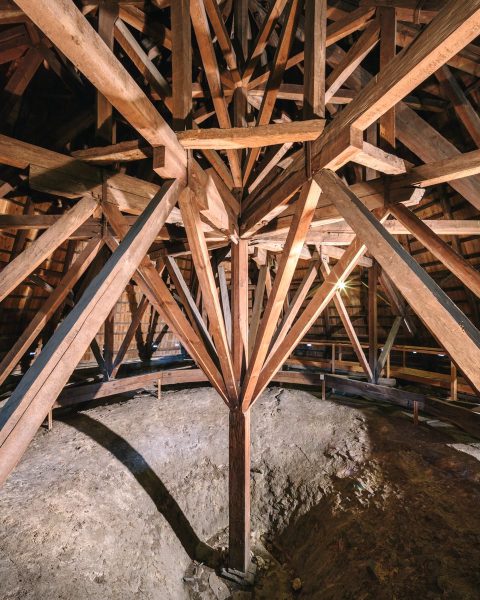 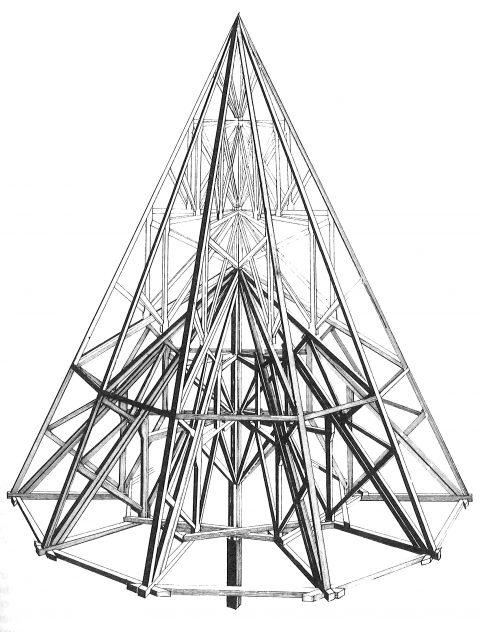 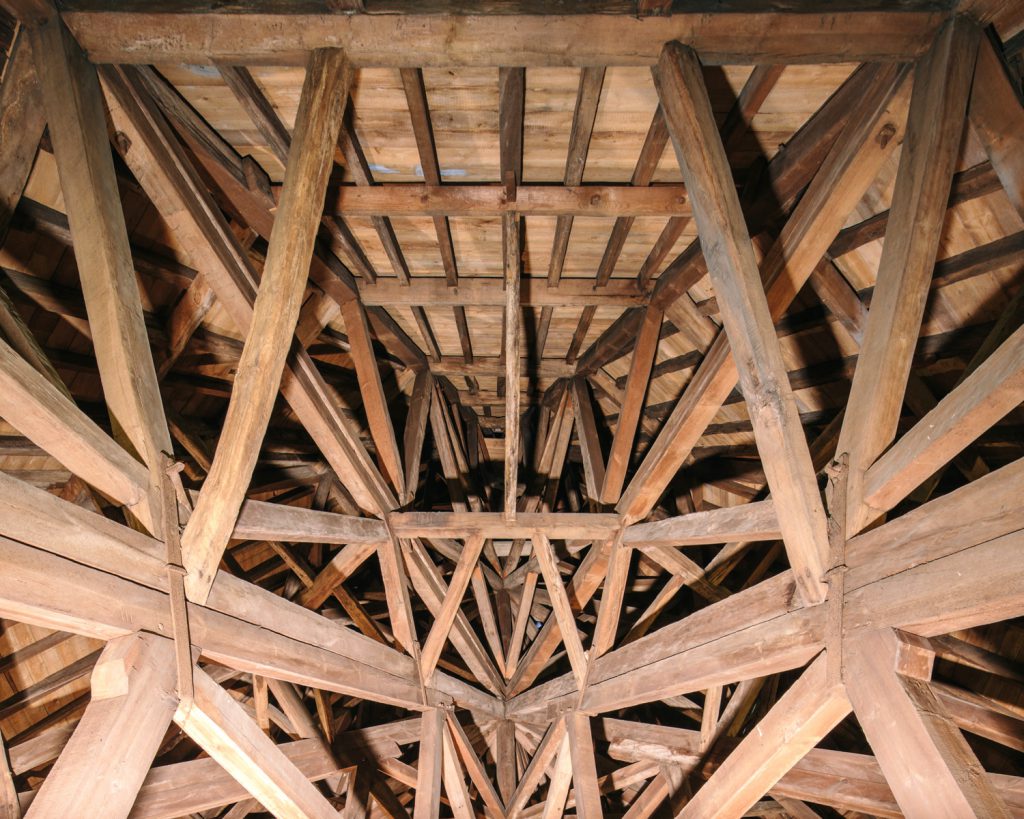 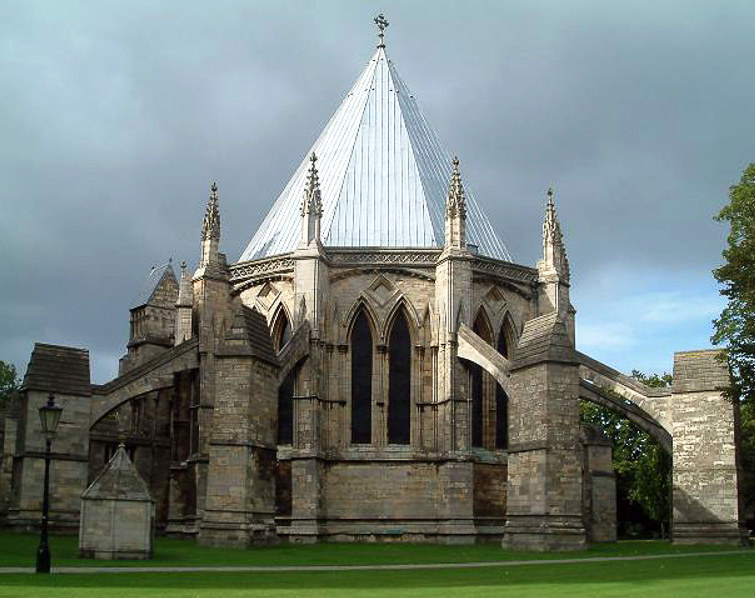 Log Book, an open installation commemorating 800 years of the Charter of the Forest (a companion to the Magna Carta), will take place in the Chapter House, Lincoln Cathedral. A team of traditional woodworkers will process a large stack of locally felled logs by hand, slowly and methodically turning them into beams of the same kind used in the roofing structure of the medieval cathedral…

The beams will then be taken to Yorkshire Sculpture Park in 2018 and used to construct a new piece. Following that, a book will be produced that reveals the entire process from start to finish, through photographs, essays and sketches. The plan is to print early editions of Log Book on paper made from the pulped woodchips created through processing the wood. 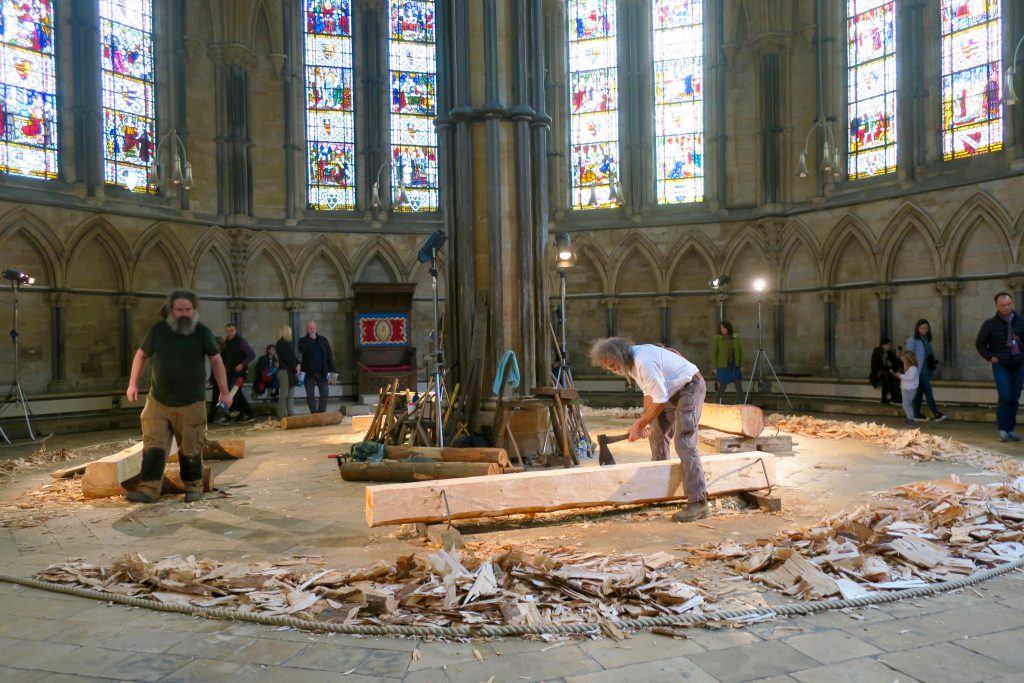 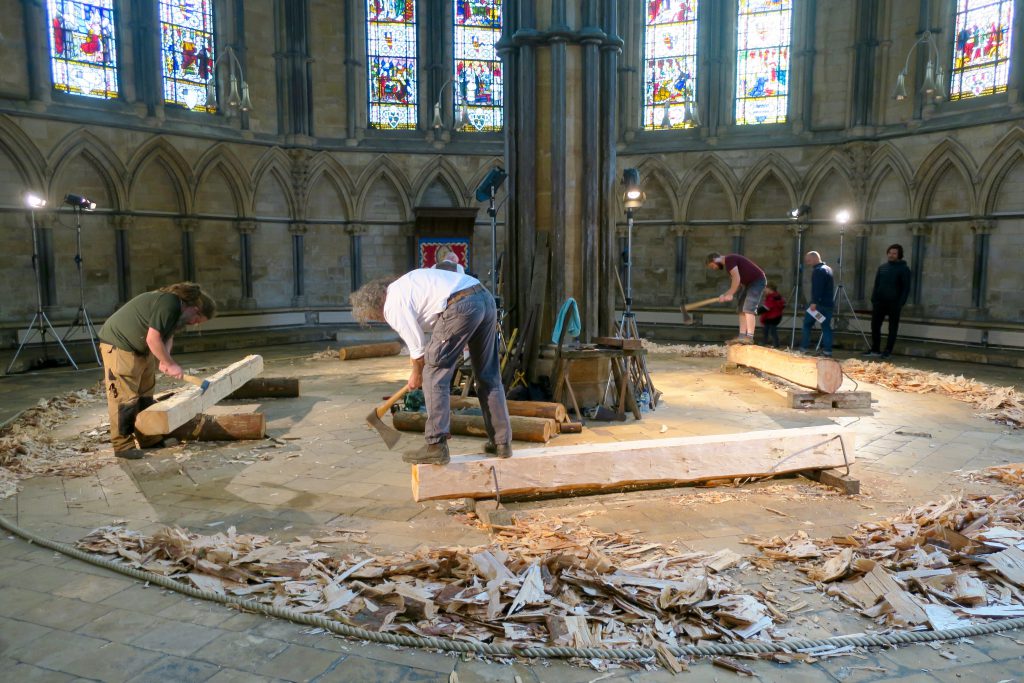 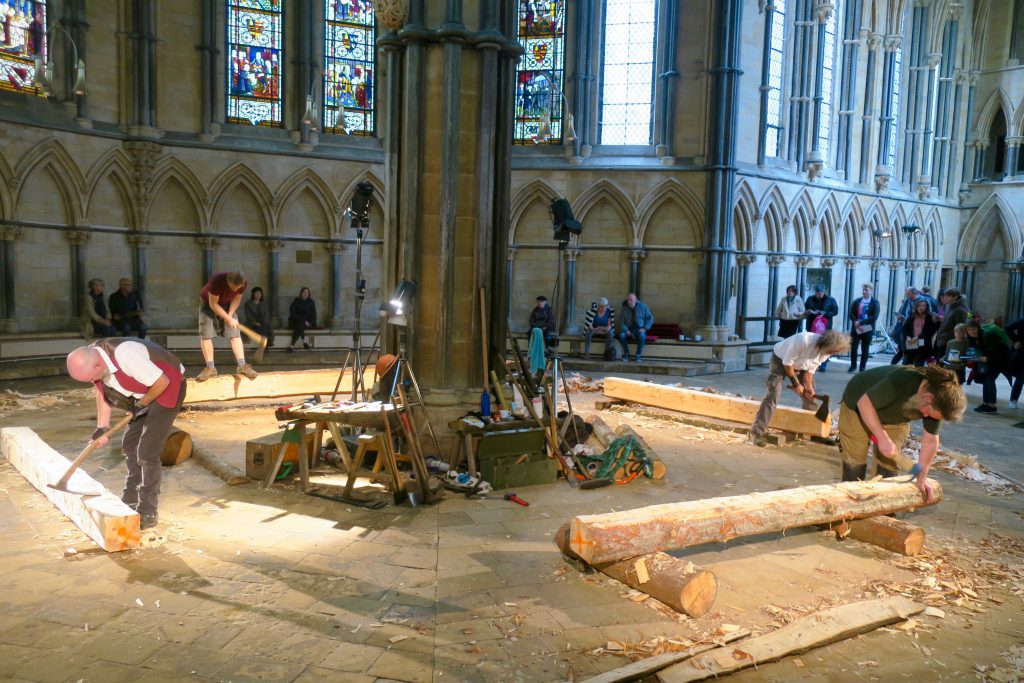 They worked in concert on four logs at a time, in a spellbinding performance of silent meditation. No words were spoken, there was just the sound of the axes, a resonant reminder of the value of wood. 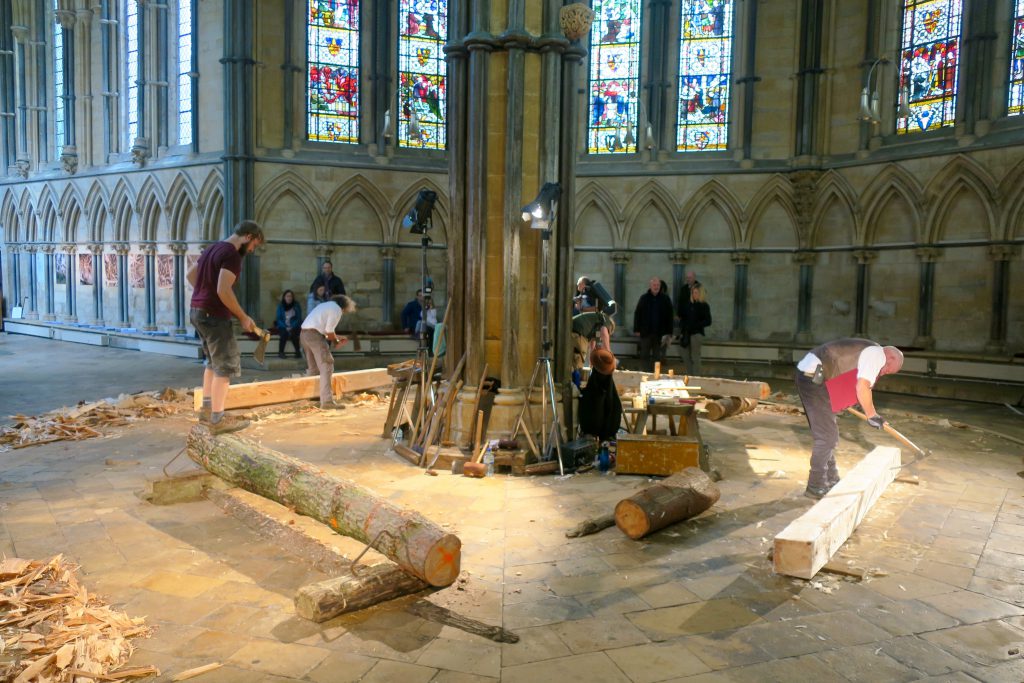 Every so often a small bell was rung and they would down tools, released from their vow of silence. 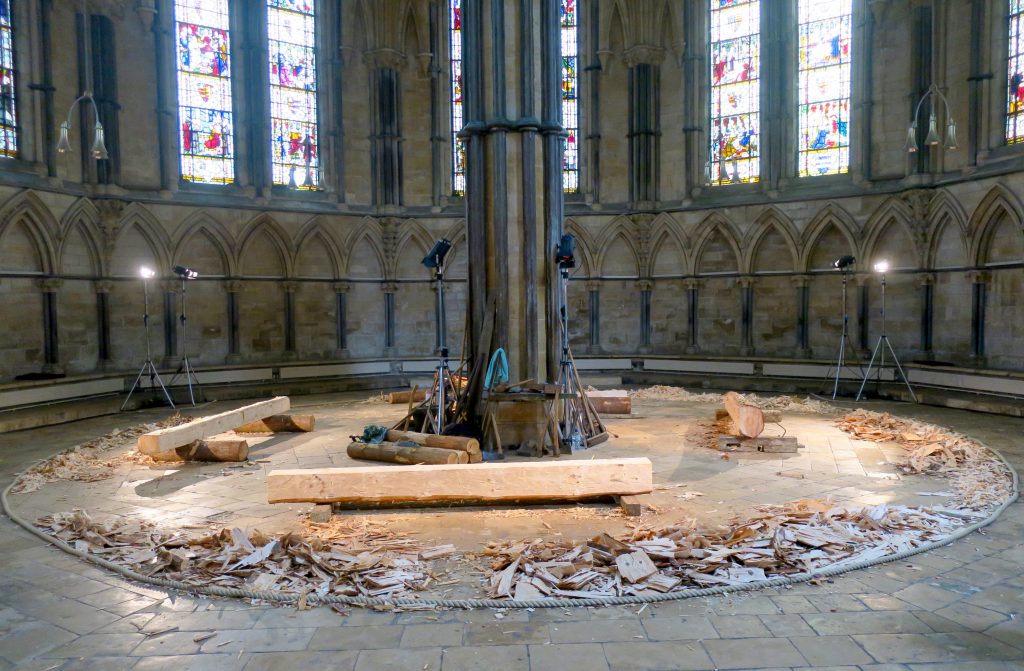 My childhood, and my youth were set against the backdrop of the ancient veteran oaks of Sherwood Forest, and these monoliths served to inspire all that was to come after. The woodlands of Nottinghamshire and Lincolnshire had a profound impact; the trunks, the boughs and branches forming the roofs of what for me were structures to rival the greatest cathedrals.

The act of manufacture is both creation and destruction, the tools facilitate the process and become an extension of your mind, the woodchips represent your efforts and that which is left behind, the product.

When in the town and the city, it is not modern builds manufactured with speed and poor materials for little more than profit that make an impression on me, but those old buildings slowly made by artisan builders that resonate; with the tool markings on the beams and intent to last for generations. 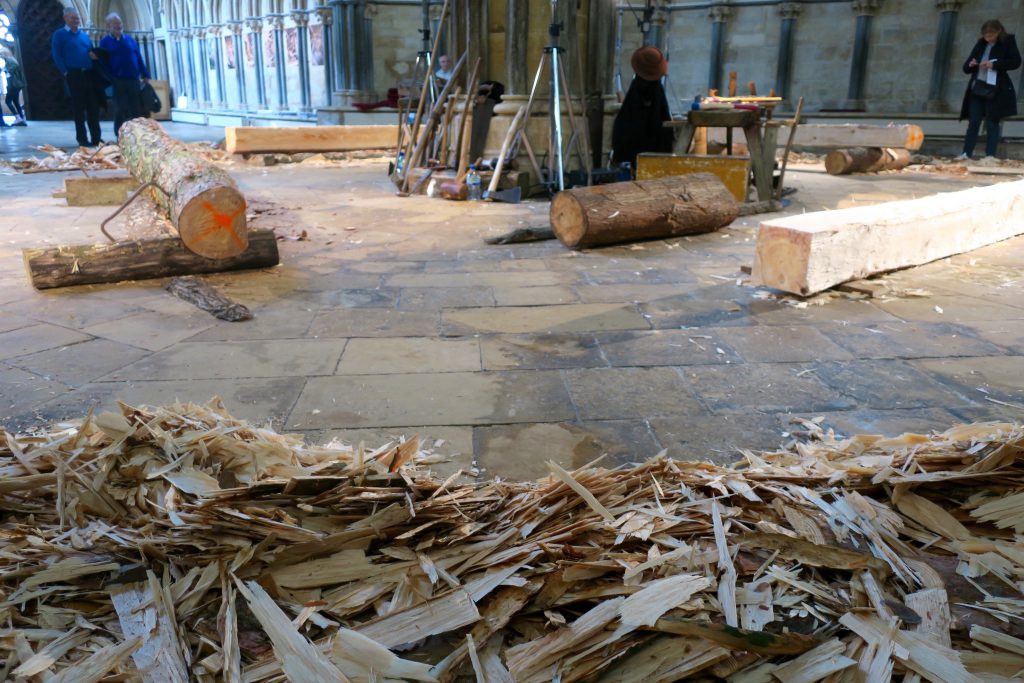 There is no better place to be than working in the woods with green timbers and hand tools. No noise from machinery, just the sounds of nature and the varying notes of tools hitting wood. The familiar feeling of ‘your’ tool handle in hand and the natural shape of the wood deciding for you how it should be worked.

Knowing that an entire structure can be built using only these tools, from log to beam with just an axe, minimal waste and the off-cuts heating our fires – having very little impact on nature and the world around us – makes it a very satisfying way to work.

As a young girl I would sit on the back step with a piece of wood and a knife, whittling away like it was the most important thing in the world, following the shape of the wood, stumped by knots and learning about grain. Now these tools and wood feel natural in my hands and I am the same little girl looking for that smooth surface and appealing shape in much larger timbers. 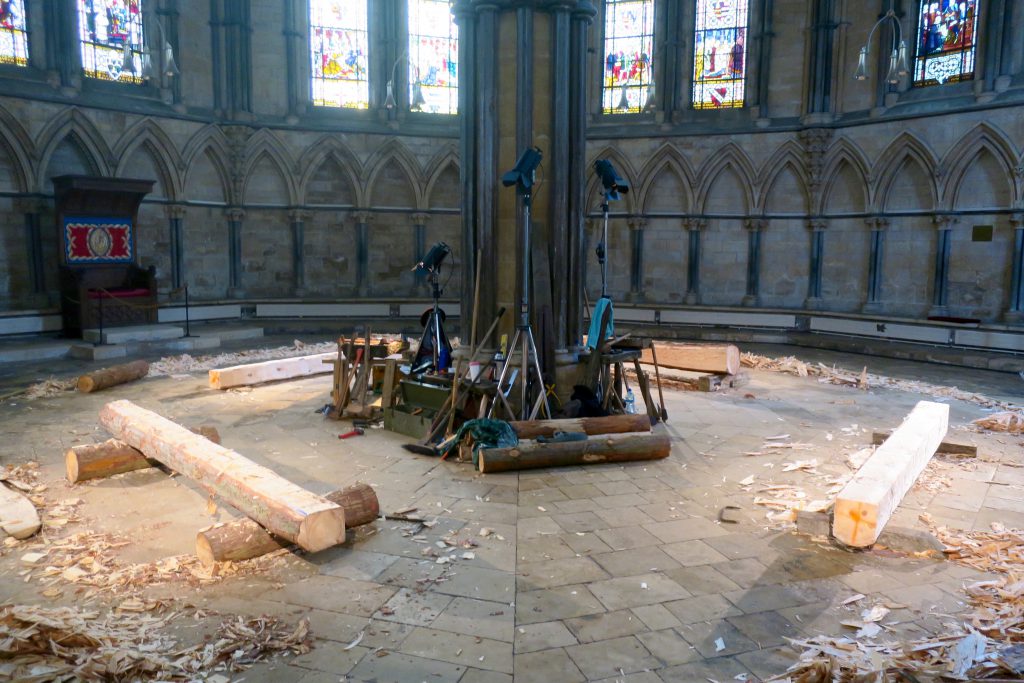 As a pre-teenager I owned my own axe and used it frequently. By my early teens I had started buying old tools, and started using them to make and repair things, which took me into antique restoration. I became a proficient wood carver, sculptor and furniture maker. As someone who used old hand tools I was often asked to work on old buildings using traditional techniques. This enabled me to stretch my skills to converting big timbers just using a side axe and wedges, which led me into timber framing. When I use these tools, which are always used well sharpened, they feel as though they become a part of you, almost an extension of your hands and body.

Eventually I bought my own woodland so that I could work in a truly vernacular fashion. I work in contrast to the world of mass production which often denies the worker to truly engage with the tools, the material and the final piece. 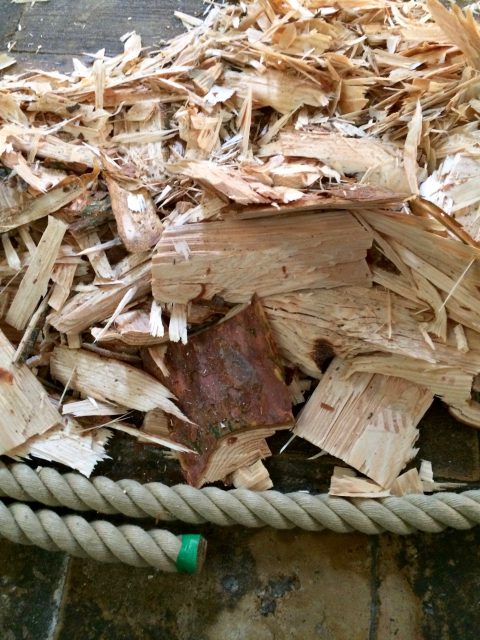 Working in the woods feels fundamentally right. A walk through the woods can be very inspirational, seeing the shapes and the movements of the trees. When creating, the timber dictates the shape and flow of what you make, and I work with the wood rather than against it.

I love the sustainability of what I do and achieve: selecting timbers that have to be removed either through selective thinning or coppicing, or reusing wood that has previously been used for something else. With everything I make, I can always tell the client exactly where the timber came from and how old it is. And sometimes there is a story which goes with the piece of wood.

Earlier this year a farmer needed new oak floor joists in the 300 year old farm house which had suffered a fire. So he asked us to remove an oak that was becoming damaged by farm machinery in a gateway. I milled the tree into beams on site and the farmer counted the rings, realising that this tree had been planted by his grandfather. This tree, an inherited product of the land and his family, will continue to support the house and those who live there for years to come. 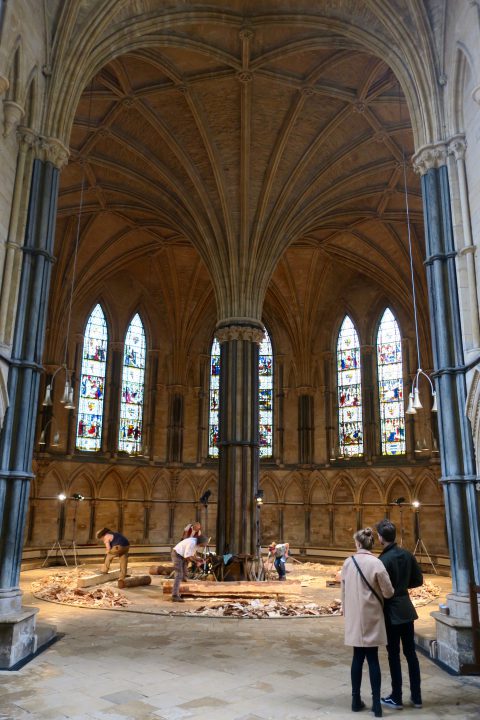 The scent of the pine 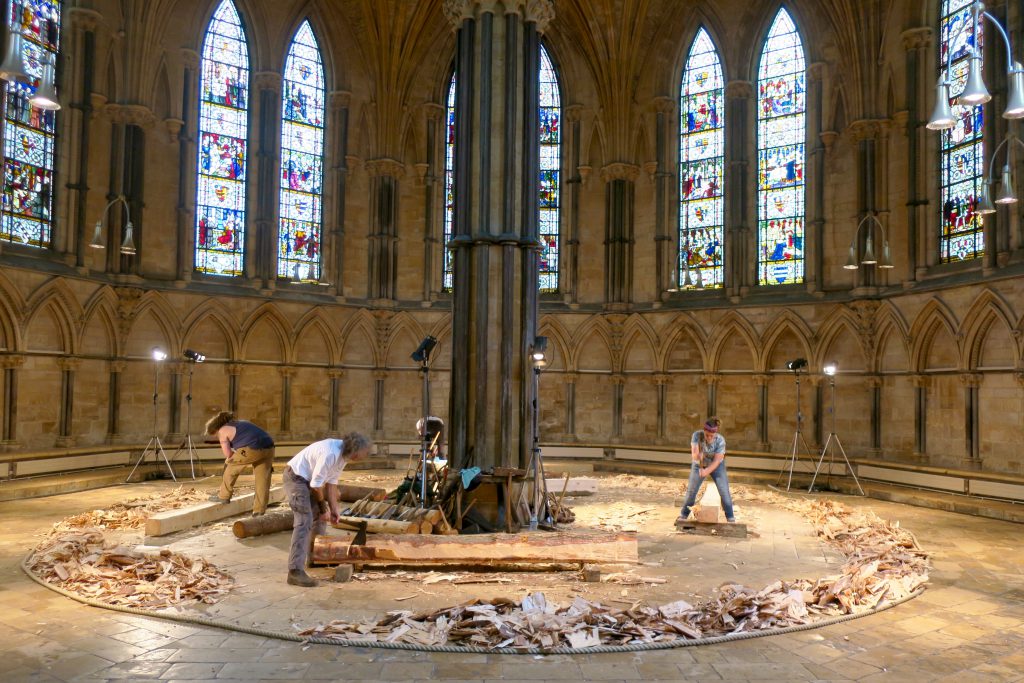 The sound of the axe 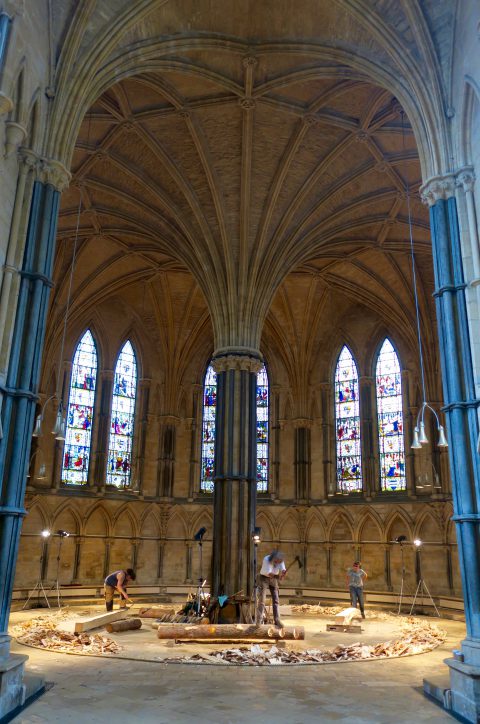 The tree of the roof 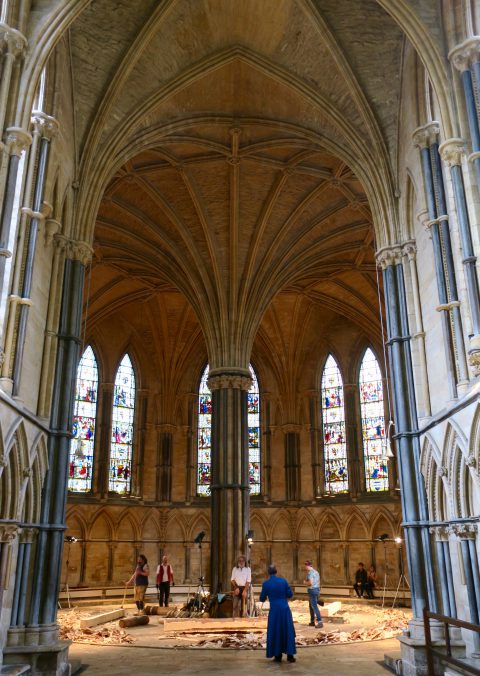 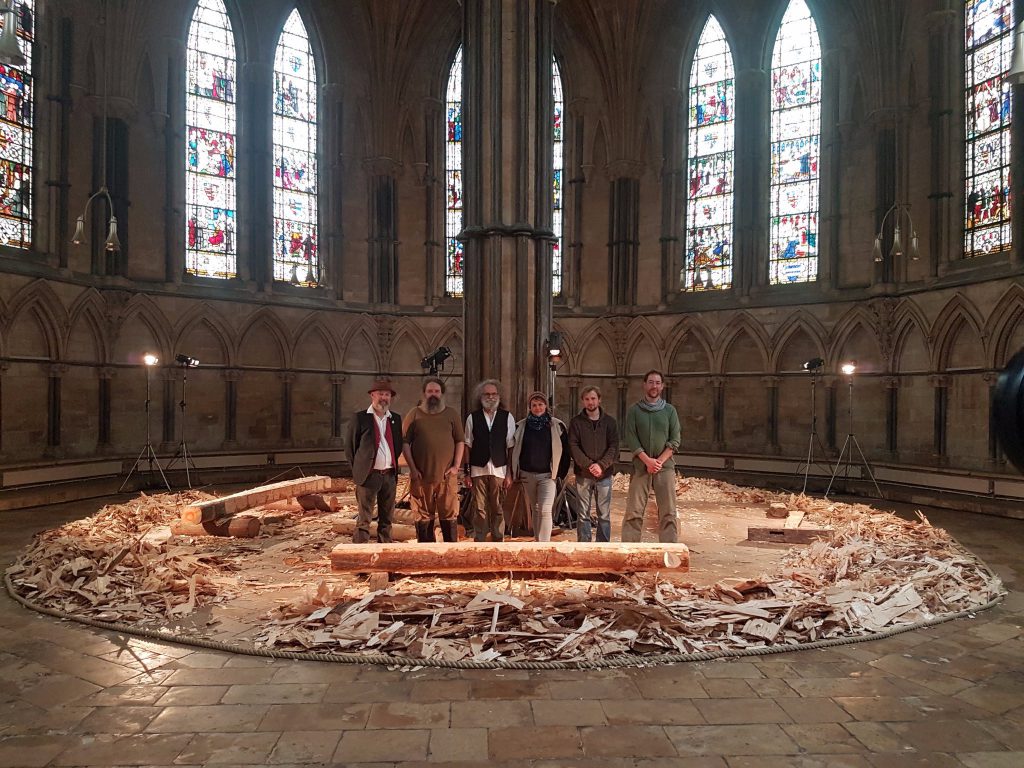 Log Book was designed by Assemble, a London based architectural collective, who were commissioned by the Woodland Trust and Common Ground as part of Frequency Festival. 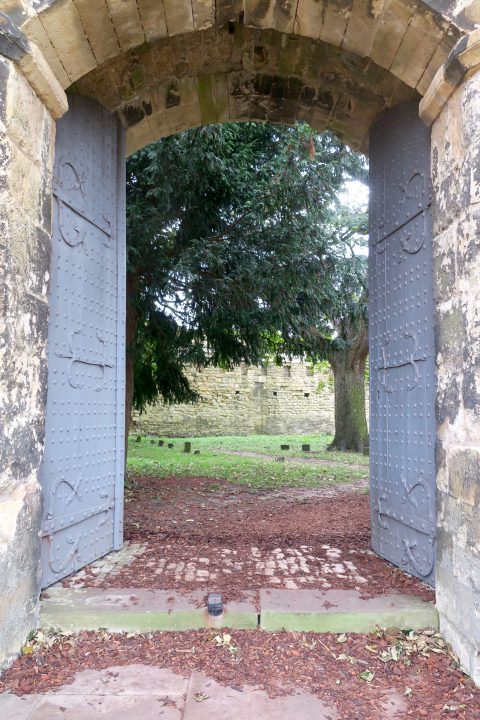 From the Chapter House it was a short walk back though Exchequer Gate to Castle Square
to see the 1217 Charter of the Forest displayed in the high-security vaults of Lincoln Castle. 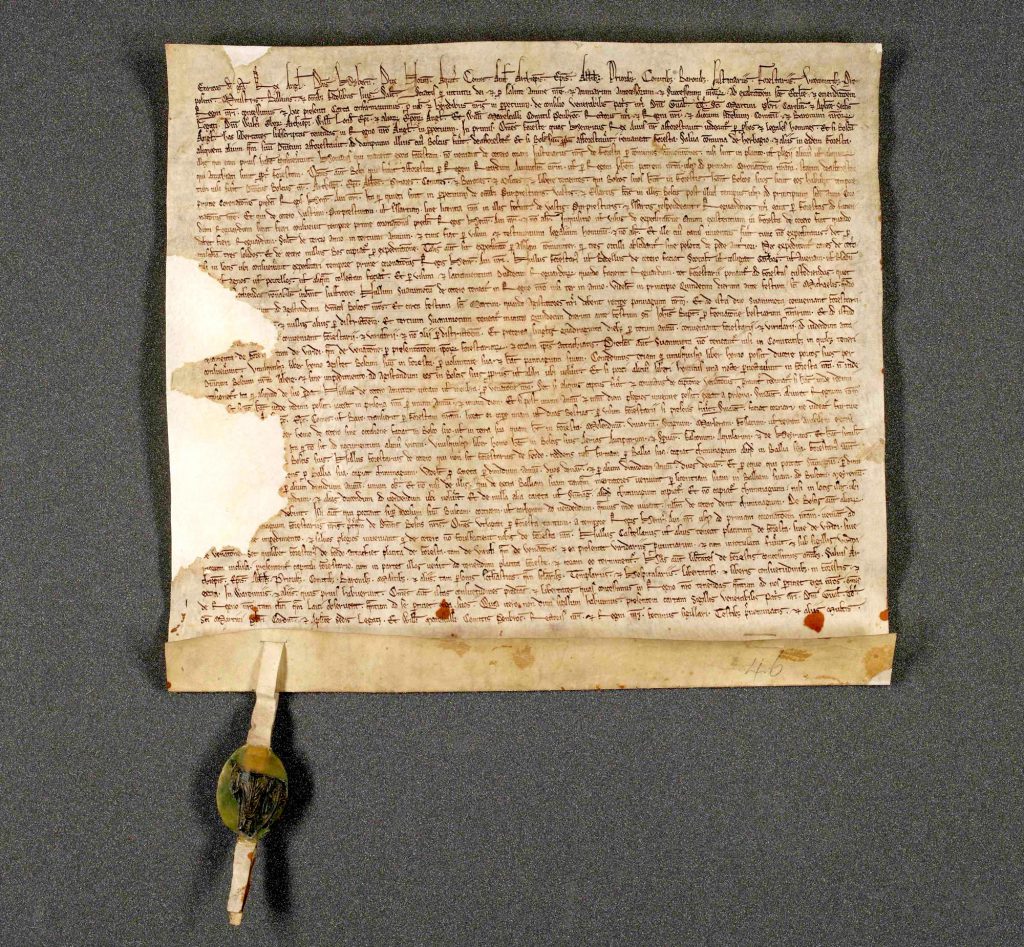 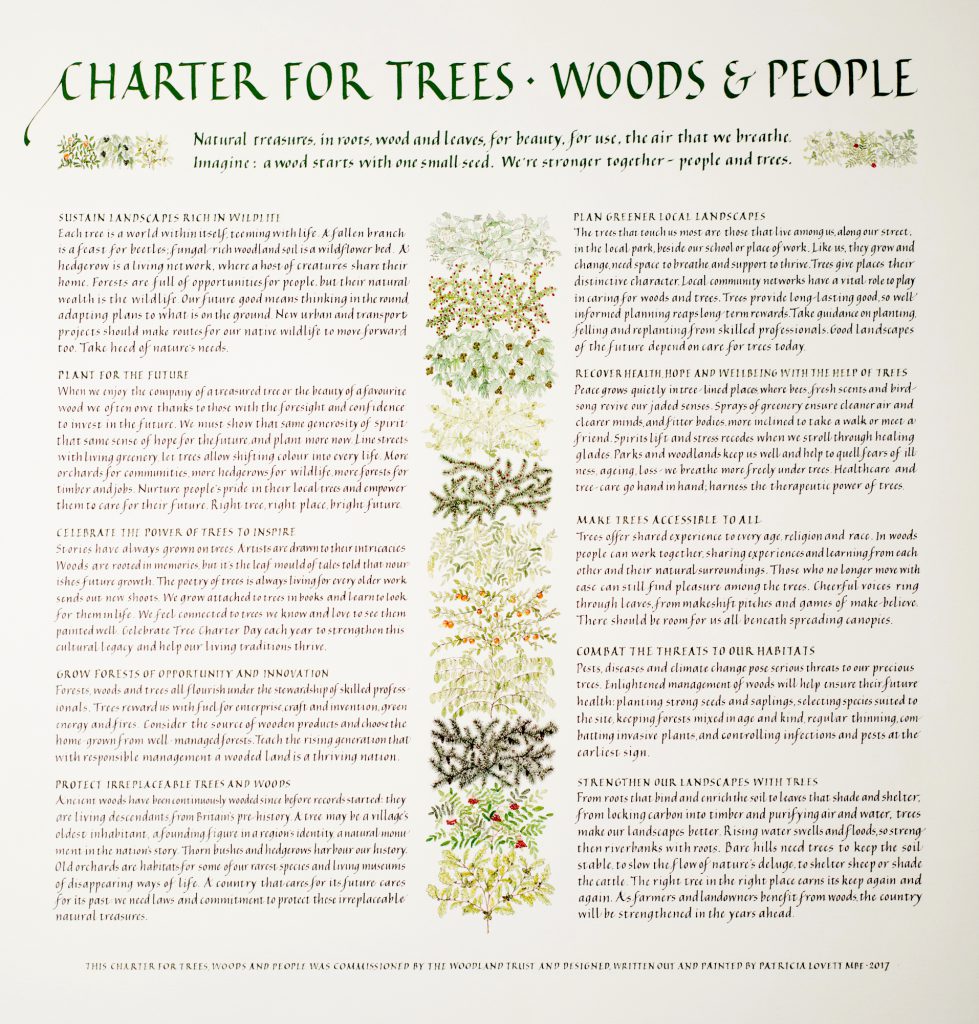 On 6 November 2017, on the 800th anniversary of the 1217 Charter of the Forest,
the new Charter for Trees, Woods and People was launched at Lincoln Castle.