Posted on September 1, 2016 by hamer the framer 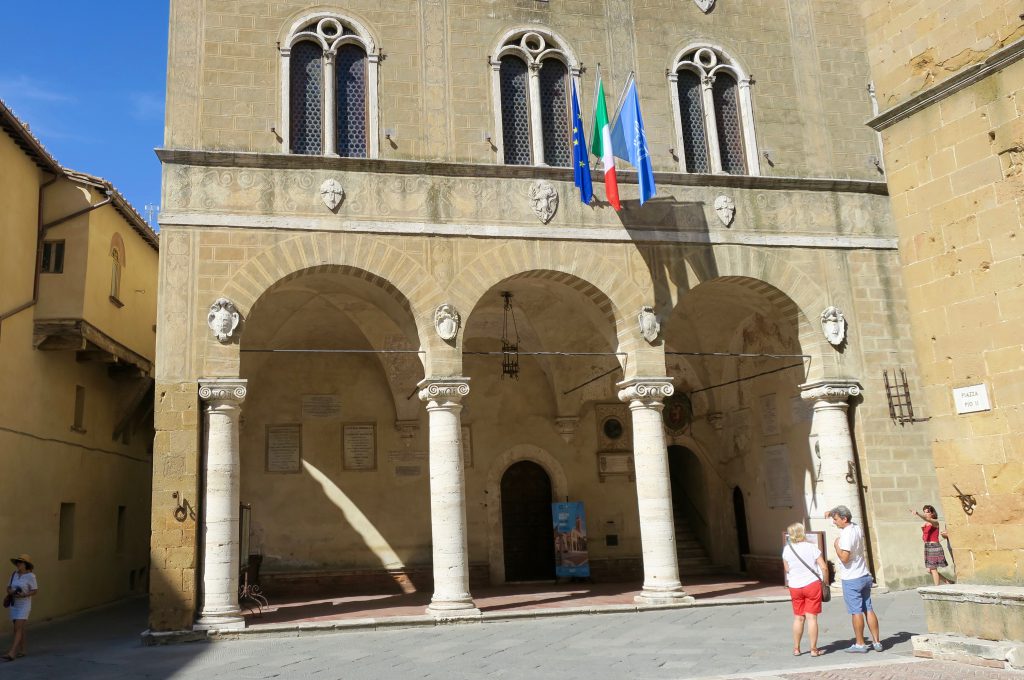 Pienza was the creation of Pope Pius II. He was born here in 1405 when it was known as Corsignano, and in 1458 he commissioned the architect Bernardo Rossellino to replace it with a Utopian new town, intended to be the rival of Siena. The buildings around the main piazza were built within three years, but the rest was never completed. The ideal city remained little more than a village. 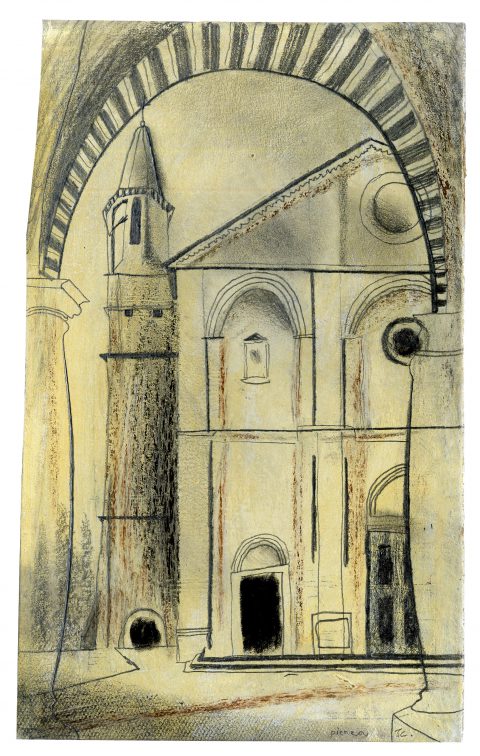 I first knew of Pienza thanks to this drawing by Jonathan Christie, Pienza No.2 (Where Ben Stood), a view of the Duomo across the piazza, from inside the loggia of the Palazzo Comunale. Jonathan told me he only later discovered that Ben Nicholson had also made a drawing at exactly the same place. 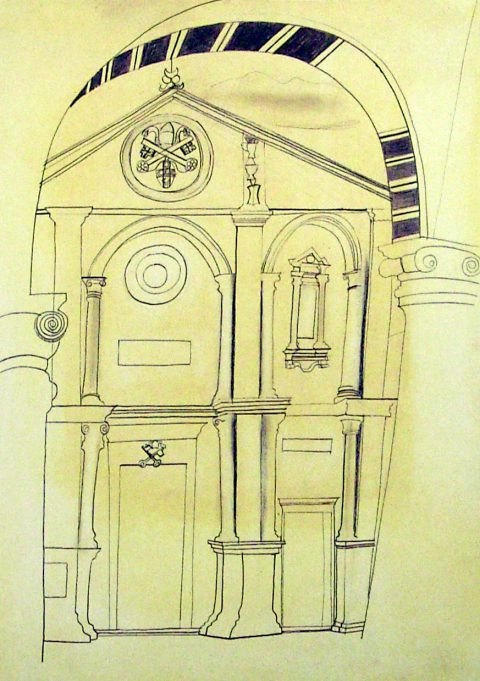 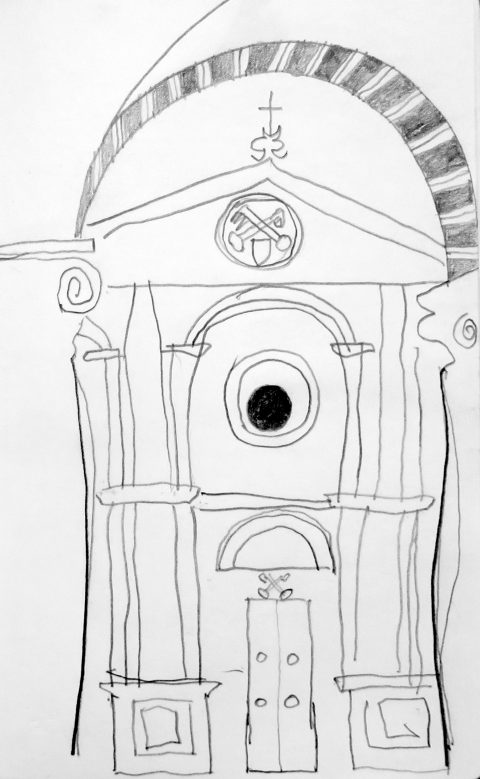 I’d not done any drawing for years but it seemed only right that I should draw it too. 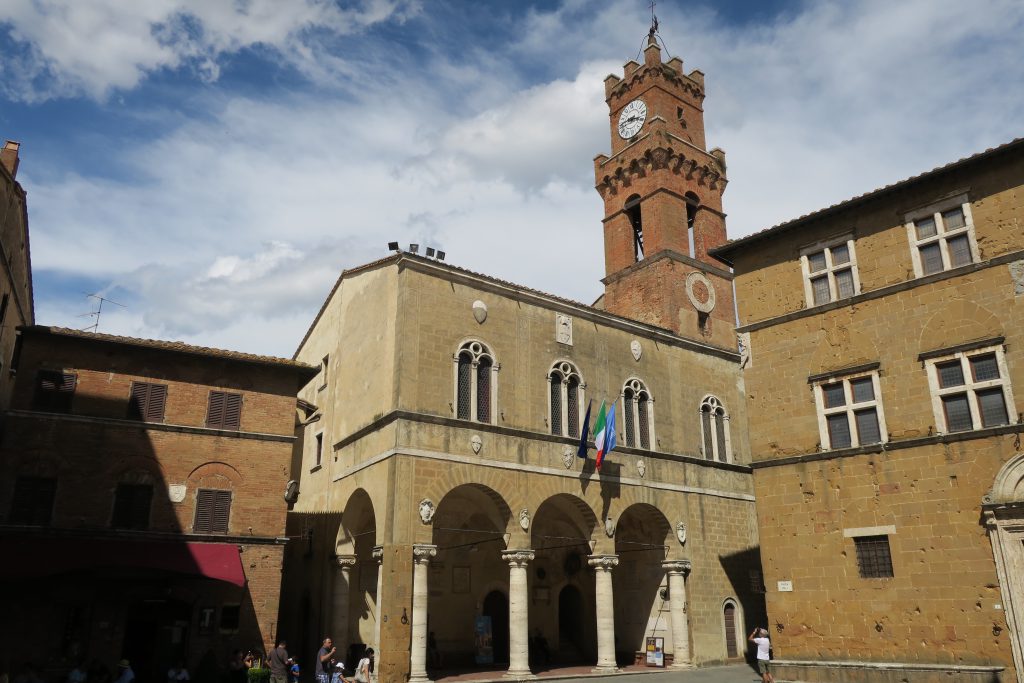 The Duomo, or Santa Maria Assunta, has one of the earliest Renaissance facades in Tuscany, its three-tiered veneer of Istrian marble surmounted by a vast garland of fruit enclosing Pius’s papal coat of arms. The campanile, rocked by an earthquake in 1545, was virtually rebuilt in 1570.

Inside, the cathedral is totally unexpected and different, Gothic not Renaissance, German gothic rather than French. The mood is one of lightness, a brilliance particularly if the sun is shining directly in, but accompanied by a sense of foreboding as soon as one realises that the whole altar end of the cathedral could collapse down the cliff side: great ominous cracks are there and even if we are informed that steps have been taken to prevent such a disaster, no-one can be certain and the danger is still very real.

The Duomo was undergoing essential restoration work. On the outside it was completely covered with scaffolding at the back, and on the inside the altar was shrouded and out of bounds. 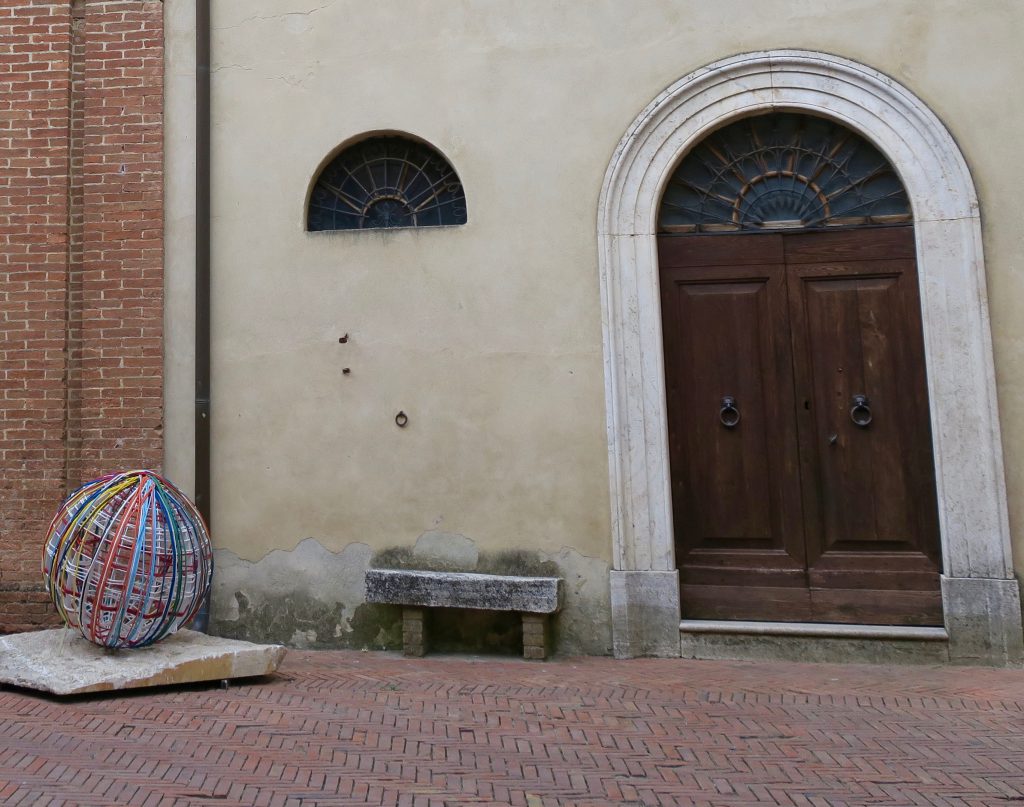 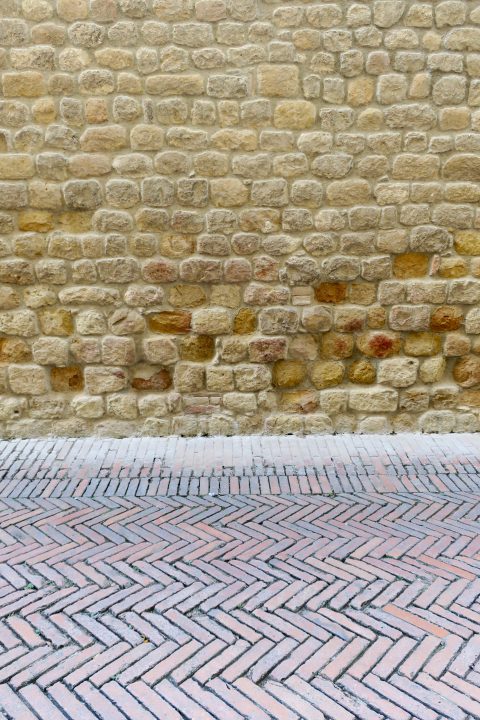 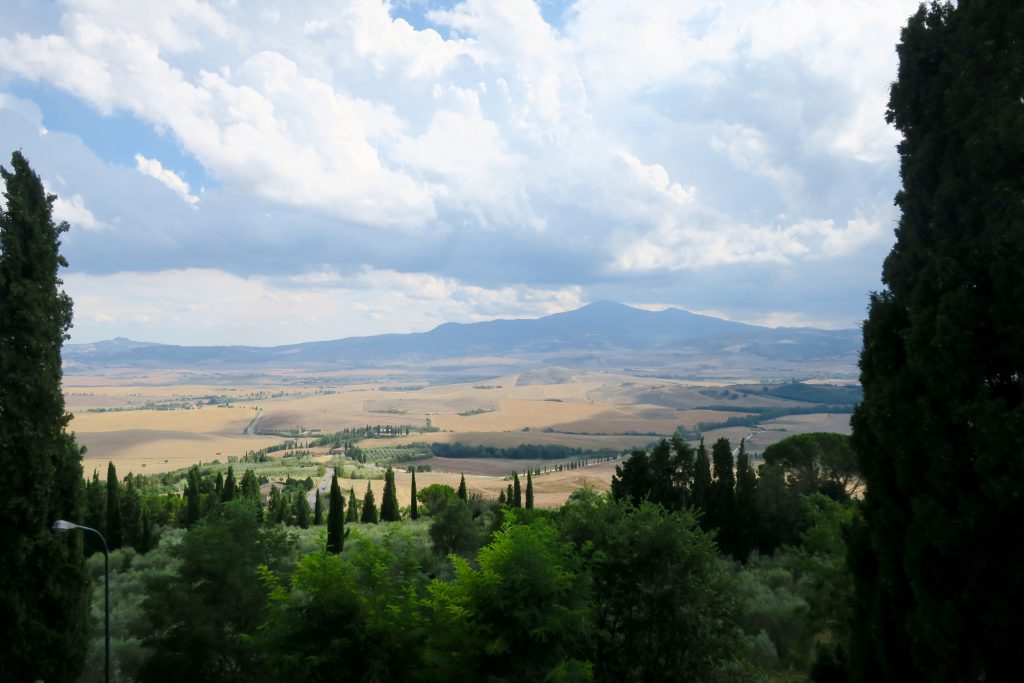 The view from the city wall behind the cathedral, looking south towards Monte Amiata. 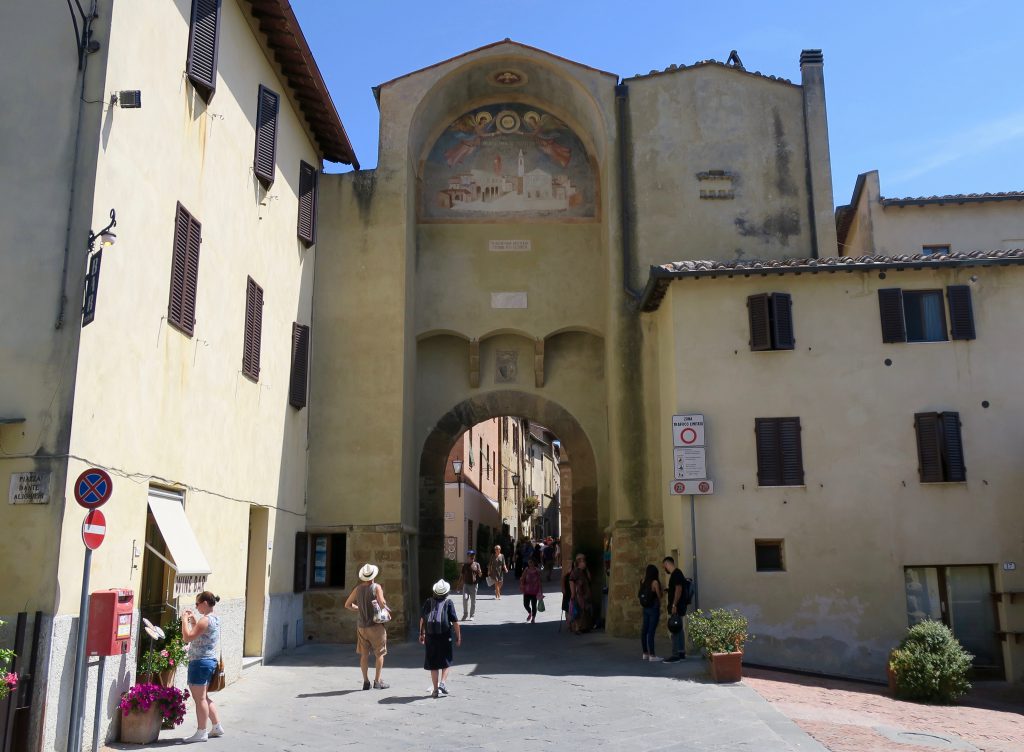 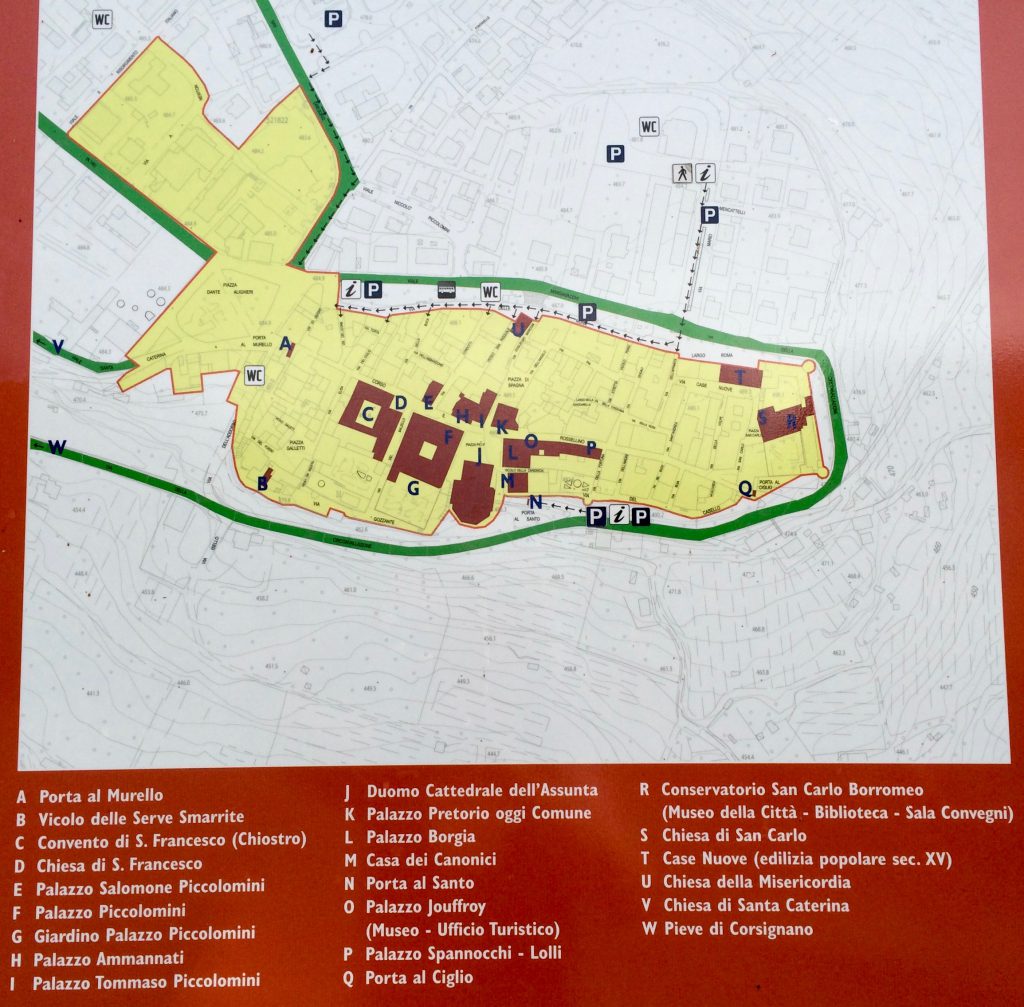 Pienza, The Ideal City Of Pius II, A Space To Live

Pienza, this small Ideal City, the result of Humanism, “born from a thought of love and from a dream of beauty” (Giovanni Pascoli) according to the will of Pope Pius II (Enea Silvio Piccolomini), has been maintained over the centuries very much as its founder conceived it between the years of 1459 and 1462. Today Pienza has four museums, a celebrated square, unique architectural buildings and monuments that anticipated the architecture of the modern age. It was the papal bull of Pope Pius II that for the first time instituted in Italy the safeguarding of its archaeological heritage and the protection of his Cathedral. Today in Pienza’s historical center, following the information exhibits which describe each of its districts and which are located on either side of Corso Rossellino, you can take a guided tour not only of the city and its history, but also of the traditional crafts and artisans that live here, of the shops of applied arts, traditional food products, cultural products in general, and of its cafes and renowned restaurants. Pienza is not a city-museum, it is a city of museums, where one can live on a human scale, in search of ancient dignity. 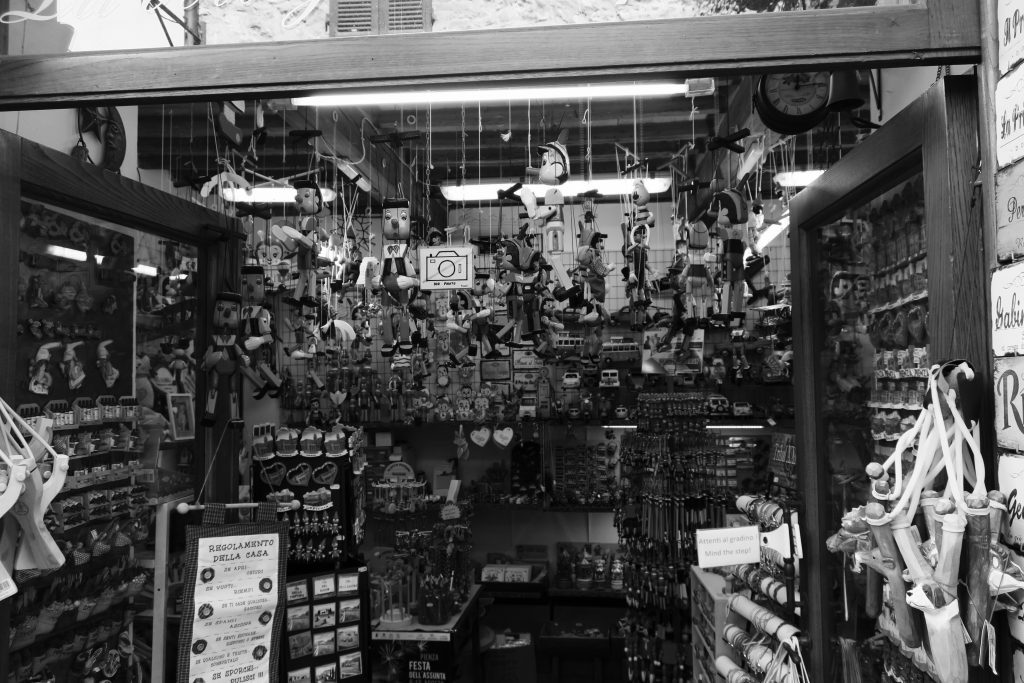 On Corso Rossellino a shop full of Pinocchios and handy catapults (+ no photo sign). Then down the street two photos I wished I’d taken. In an antique shop an elderly man sits in an armchair whilst his wife kneels at his feet to show him her earrings, his fingers on her ears. Outside an old lady puts her hand on the pregnant belly of a young woman, two strangers sharing a heartbeat. I imagined myself like Henri Cartier-Bresson, capturing brief moments of joy. Then realised I’d need to be quick, alert, single-minded, furtive, predatory… Much easier to photograph camera-shy puppets. 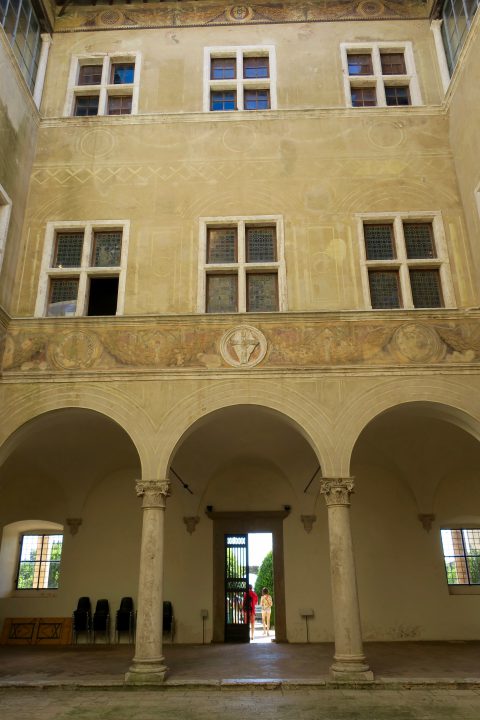 We joined a tour of the Palazzo Piccolomini but photography was not encouraged here either. 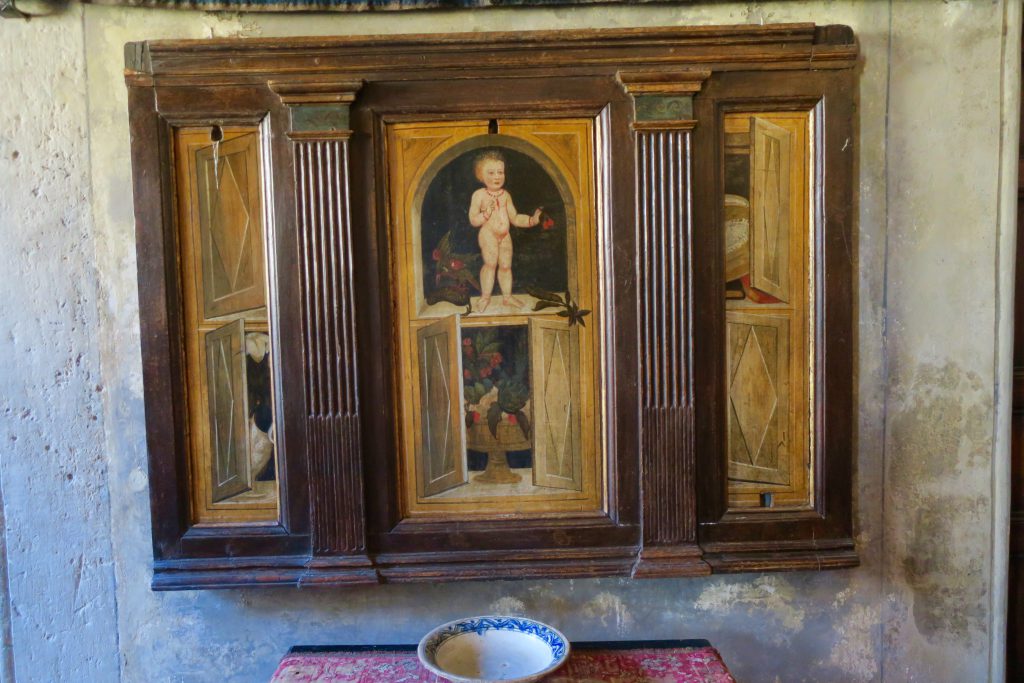 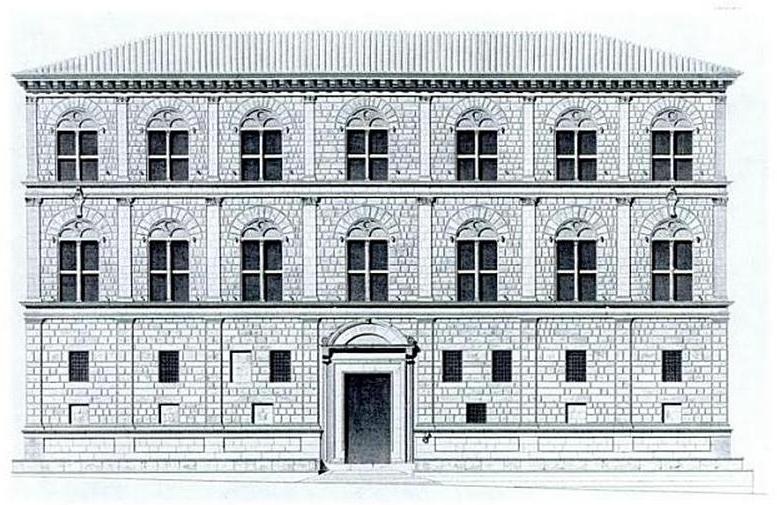 Pius’s residence, The Palazzo Piccolomini, was modelled on Alberti’s Palazzo Rucellai in Florence, and built by Rossellini over the demolished remains of the Piccolomini’s former feudal holding in the village. All three main facades are identical, novelty being provided by the imaginative addition of a triple-tiered loggia at the back, making it the first Italian building to be designed specifically to afford views over a swathe of countryside. 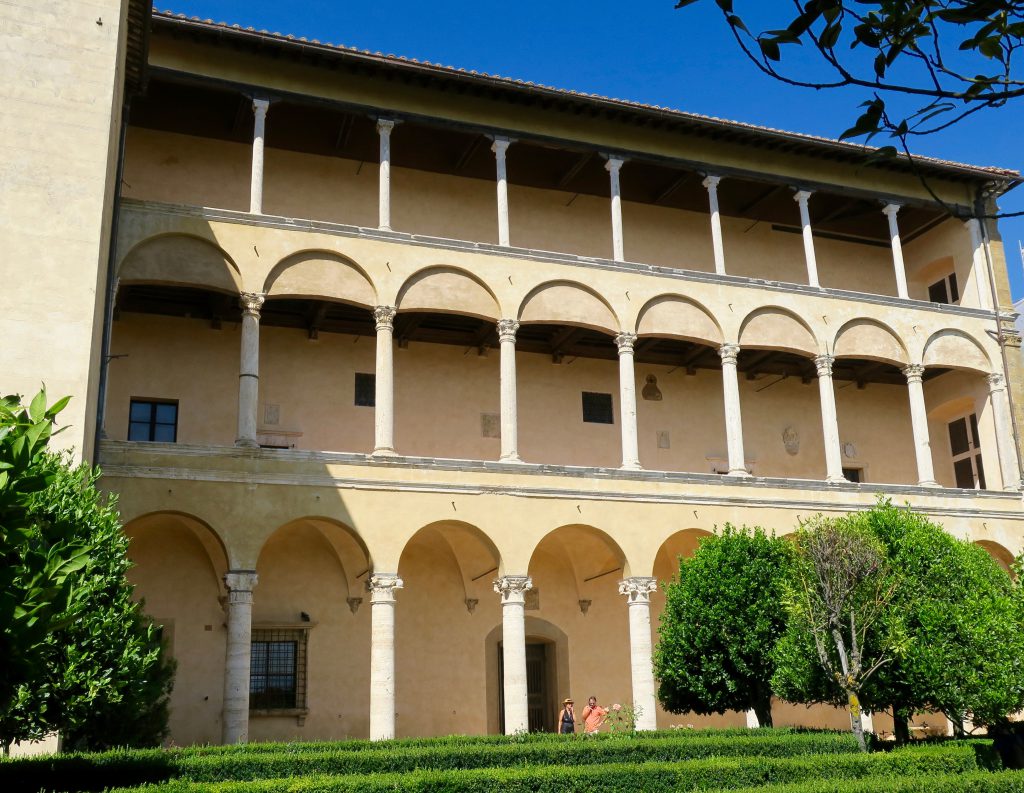 For these views, you can walk into the superb courtyard and through to the original “hanging garden” behind; it has remained unchanged over the centuries and is the perfect embodiment of the Renaissance concept that gardens form an intermediary between nature and architecture. The triple-tiered loggia, with its three orders of classical columns (Ionic, Doric and Corinthian), owes a clear debt to the great imperial buildings of ancient Rome. 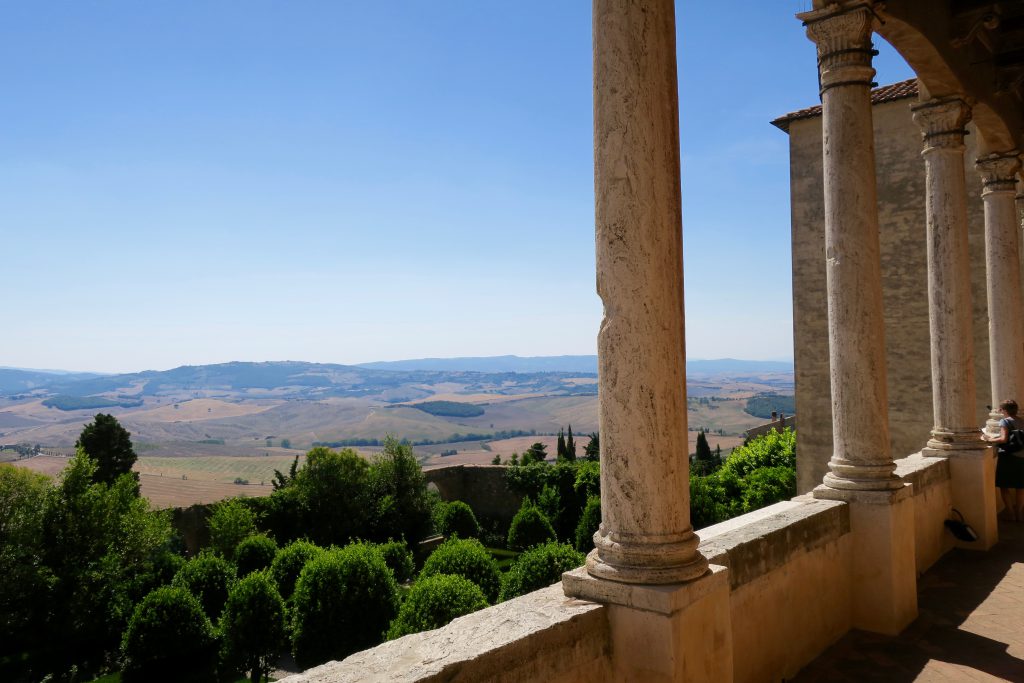 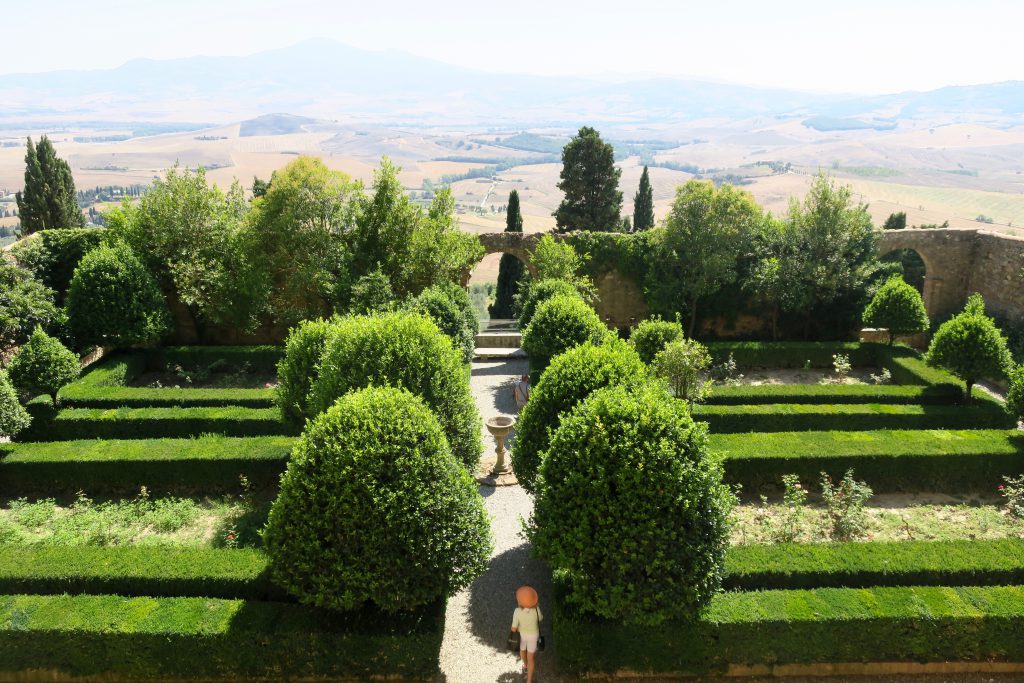 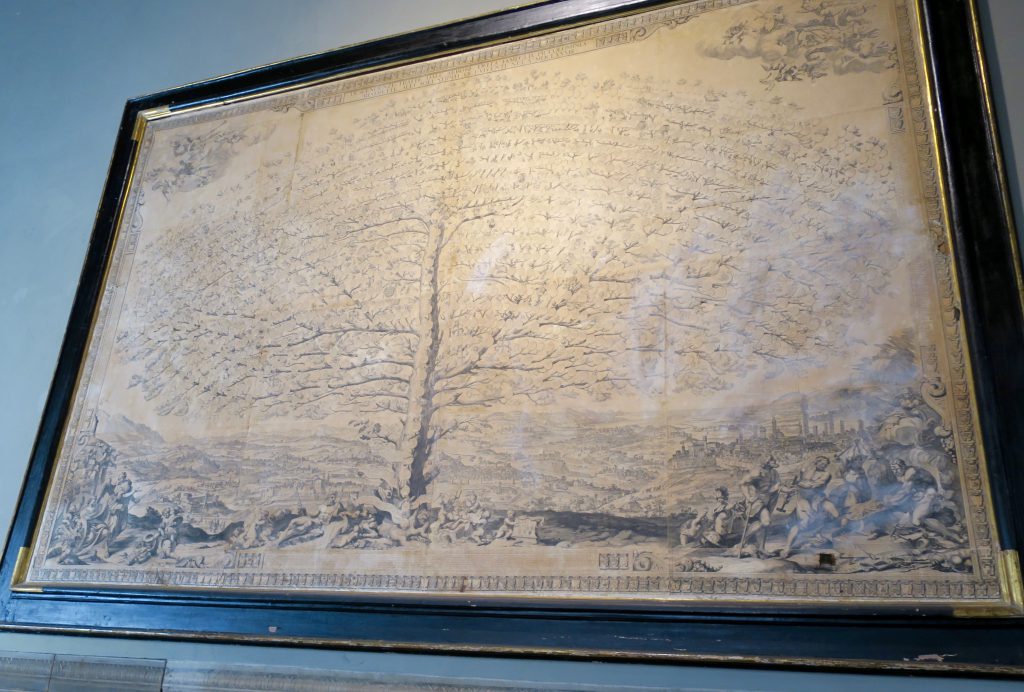 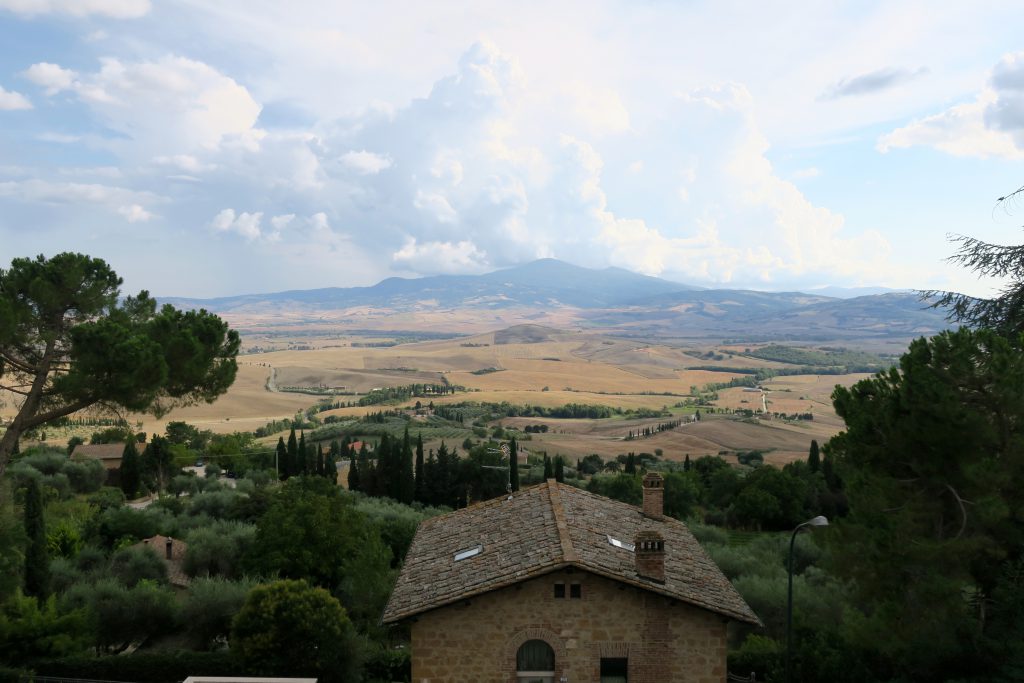 Another time we came with Lottie. She’d come to visit for a few days so we brought her to see Pienza, to sample the best pistachio ice cream known to mankind (Buon Gusto) and to draw the cathedral. 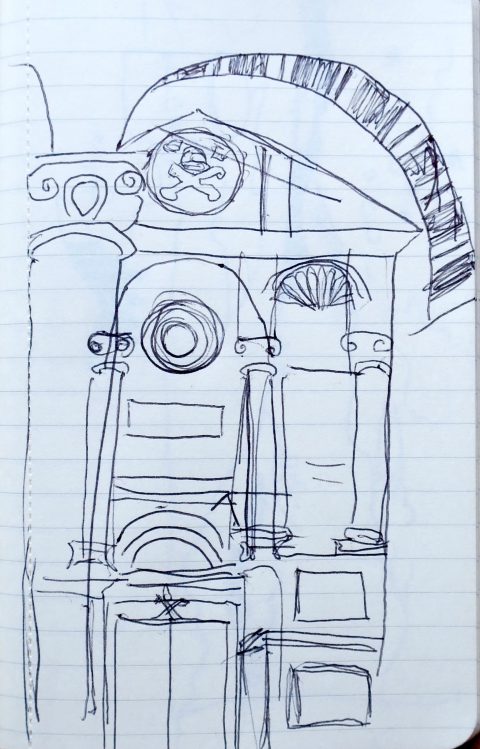 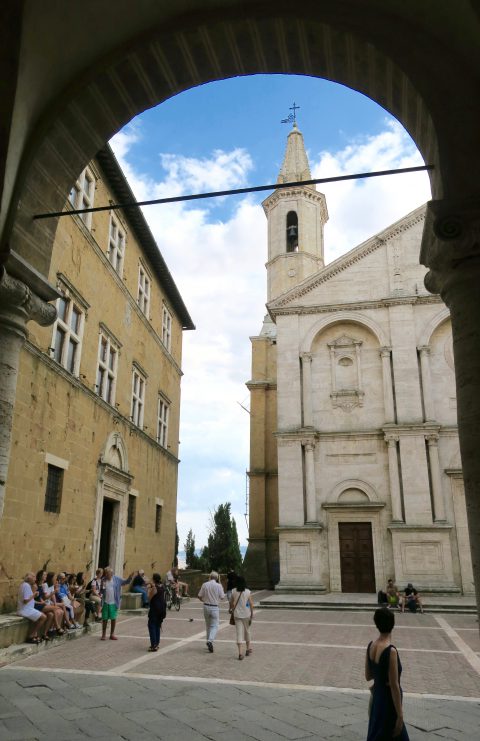 While Lottie was drawing in the loggia, Richard Rogers, the eminent architect, appeared in the piazza with his family. I think he was telling them the story of The Giant Sundial Of Pienza… 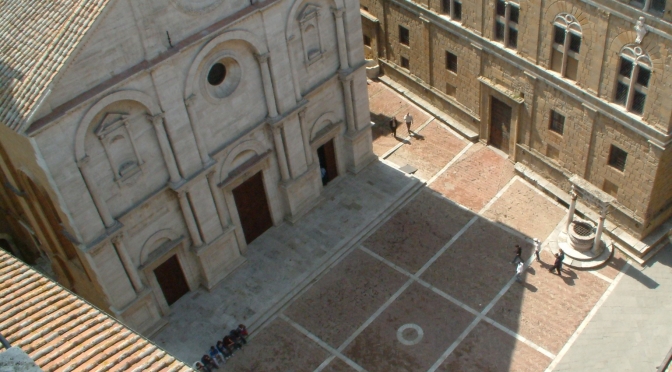 The cathedral of Santa Maria Assunta was inaugurated on 29 August 1462. It is remarkable because twice each year the shadow which falls within the nine paving slabs of the area alongside it is exactly the same size as the building itself. A ring carved into the stone corresponds perfectly with the oculus of the cathedral, demonstrating that the correspondence is no matter of chance. 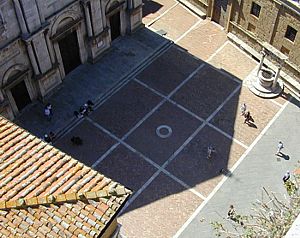 The cathedral was the work of the architect Bernardo Rossellino and was commissioned by Pope Pius II, a native of this town (which later took its name from this famous son). 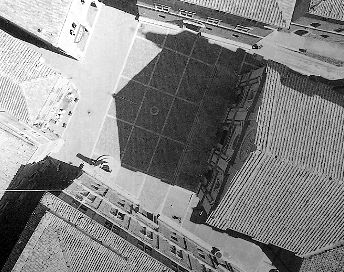 Probably the pontiff wanted an edifice that would make a real impact upon the local population and this is why the architect gave the cathedral a north-south – rather than the usual east-west – alignment. This meant that twice a year the remarkable phenomenon occurred: ten or eleven days after the Spring equinox (on 1 April) and ten or eleven days before the Autumn equinox (on 11 September). The effect was calculated to occur at solar noon…

Pienza is one of the very few places in Italy where the piazza and main buildings were deliberately rebuilt to a precise plan with the idea of creating a beautiful ideal townscape: it has ever since been considered a remarkable example of Renaissance town planning…

6 Responses to In Pienza