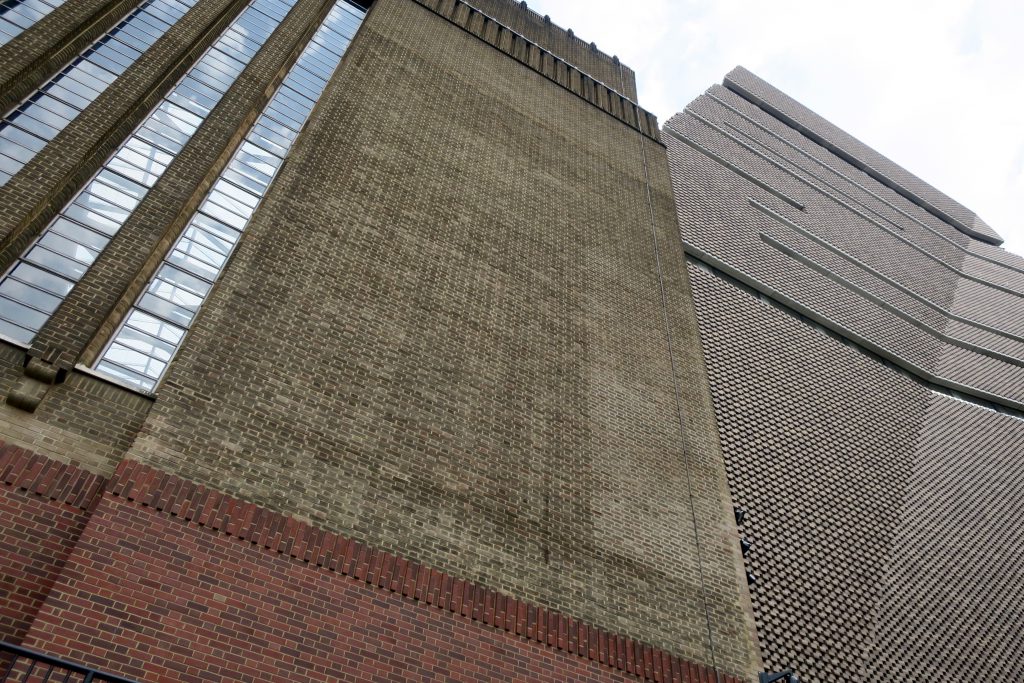 Tate Modern has a new offspring, grown out of the former power station’s oil tanks. It’s called the Switch House, with a similar tweedy brick texture to its parent building – a new London vernacular. It has a utilitarian look with no decorative frills, polished concrete inside, minimal, neo-brutalist, multi-storey car park aesthetic but beautifully tailored. In retrospect it feels a bit like we just visited an enormous new sculpture and discovered inside the seeds of its own germination. 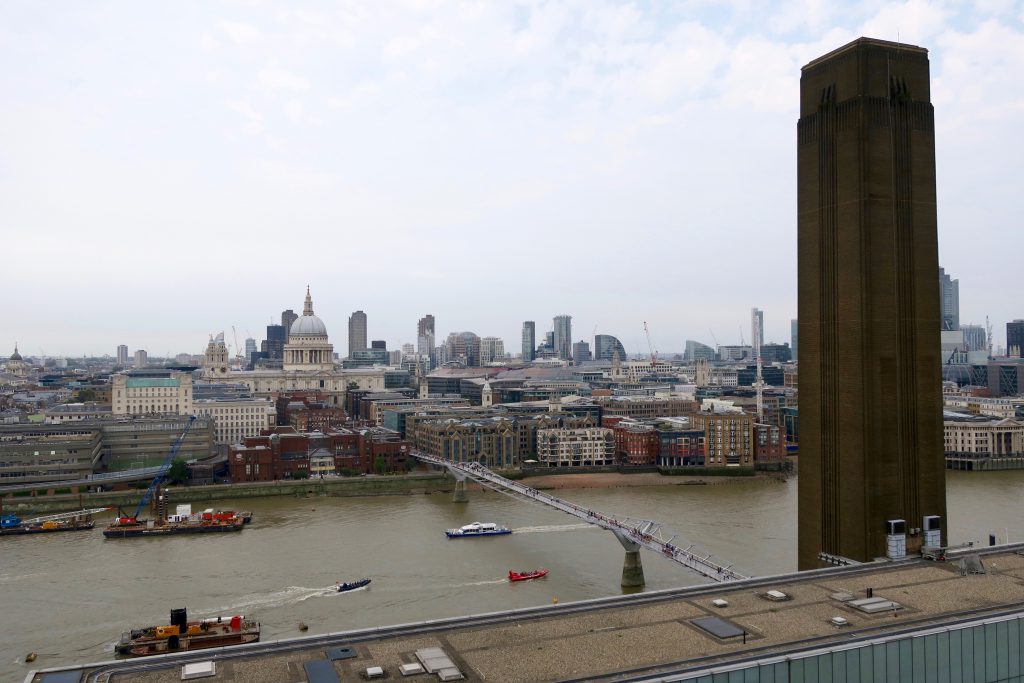 It’s a twisted pyramid of perforated brick walls rising eleven storeys to the height of the Bankside chimney, with wonderful new views over the roof of Tate Modern to St Paul’s and beyond. 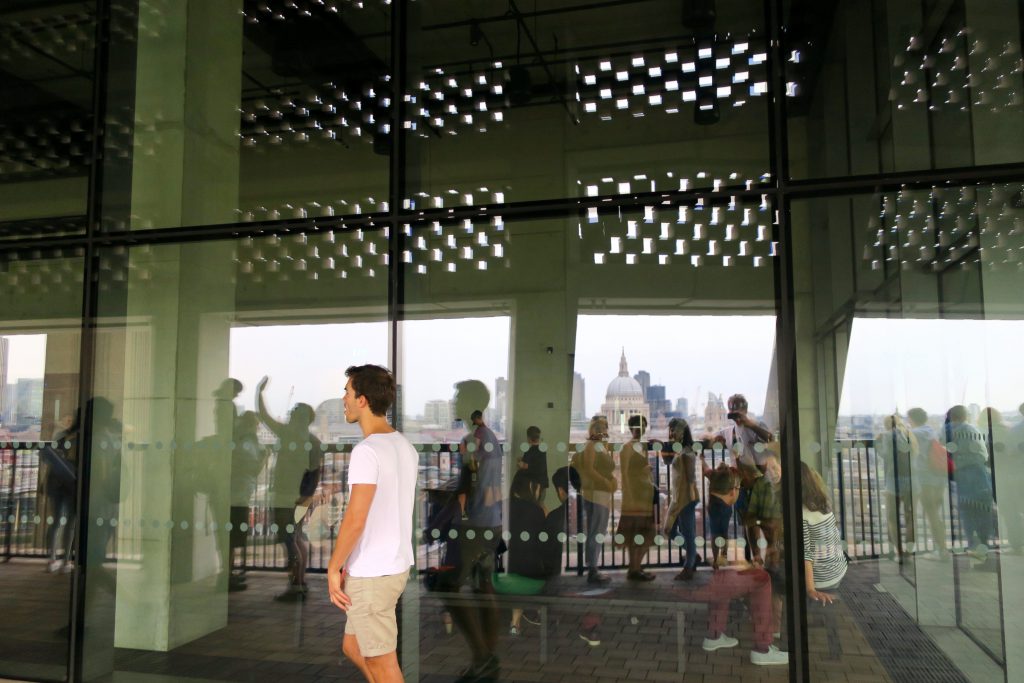 New opportunities on the Viewing Level for reflected selfies, 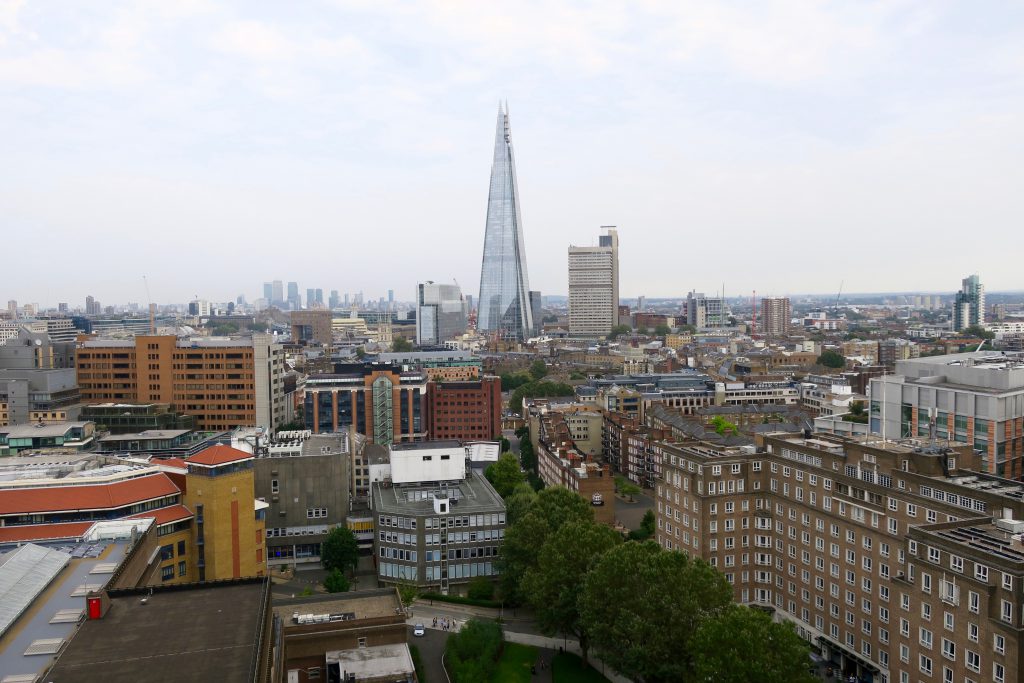 either close up or long distance. 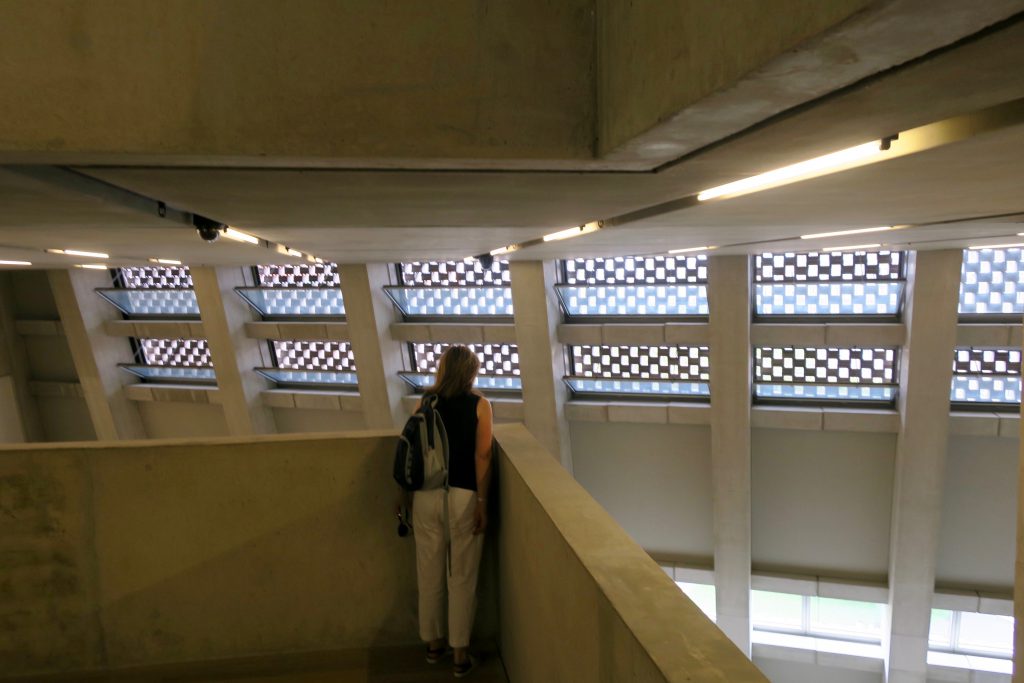 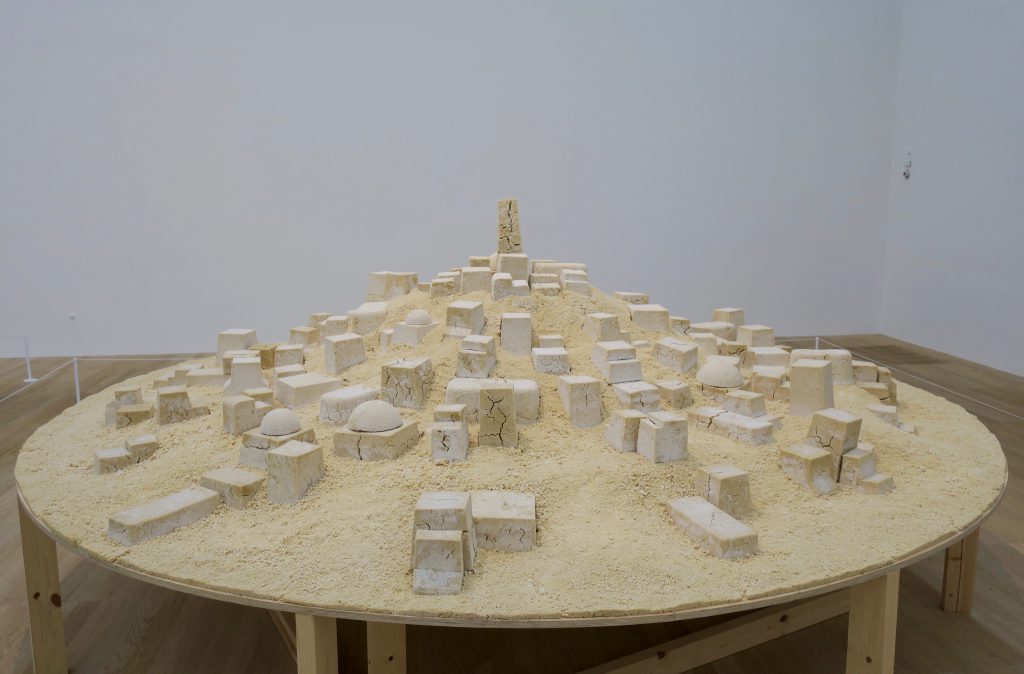 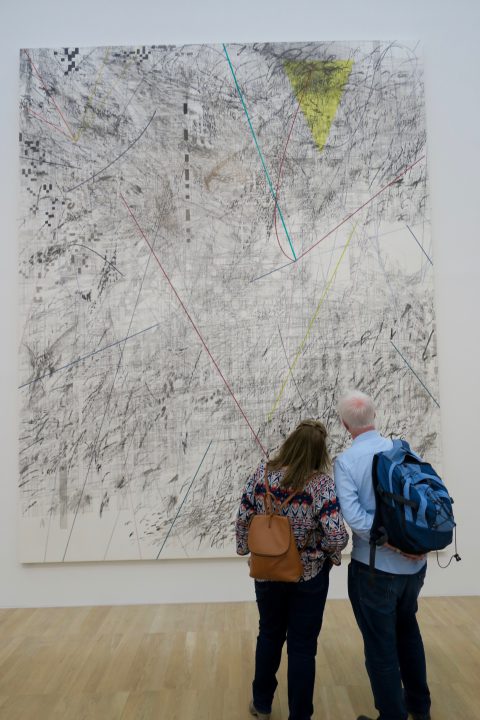 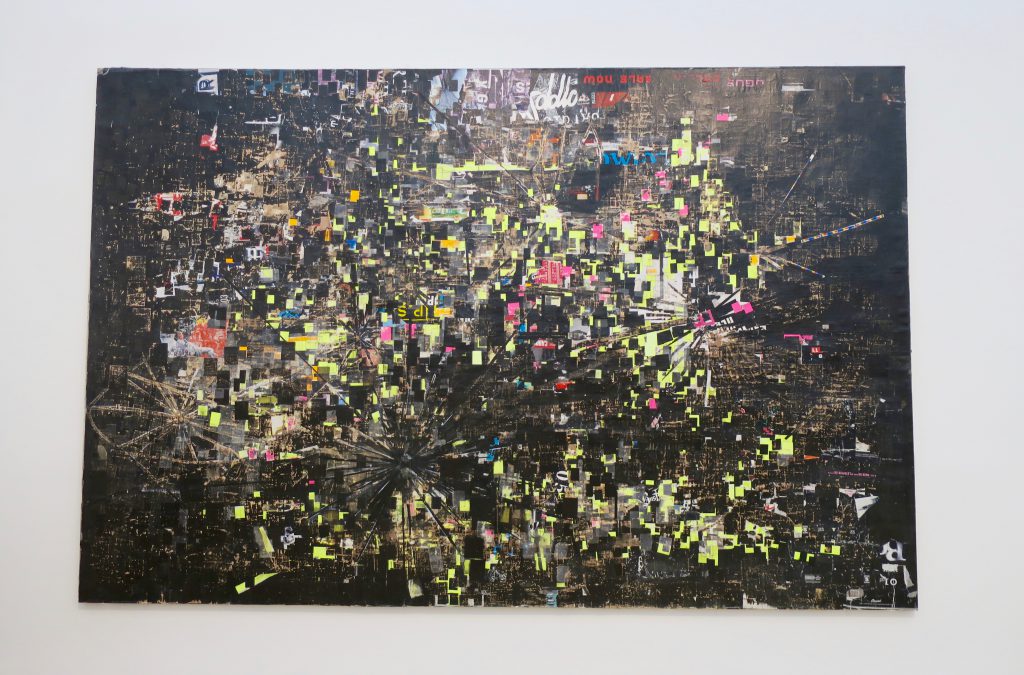 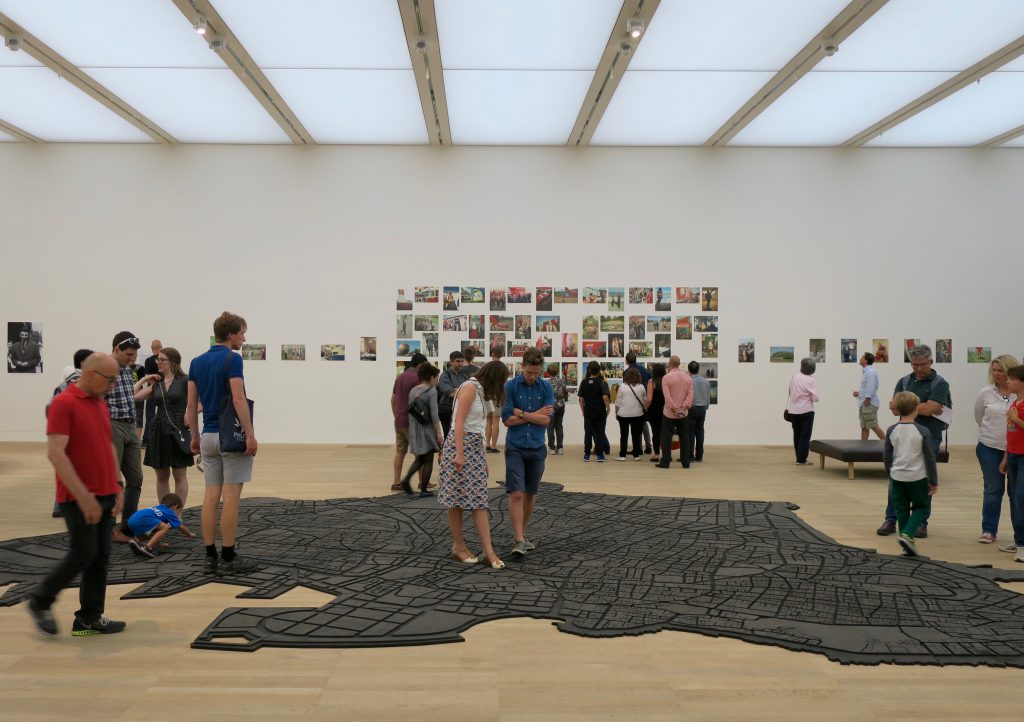 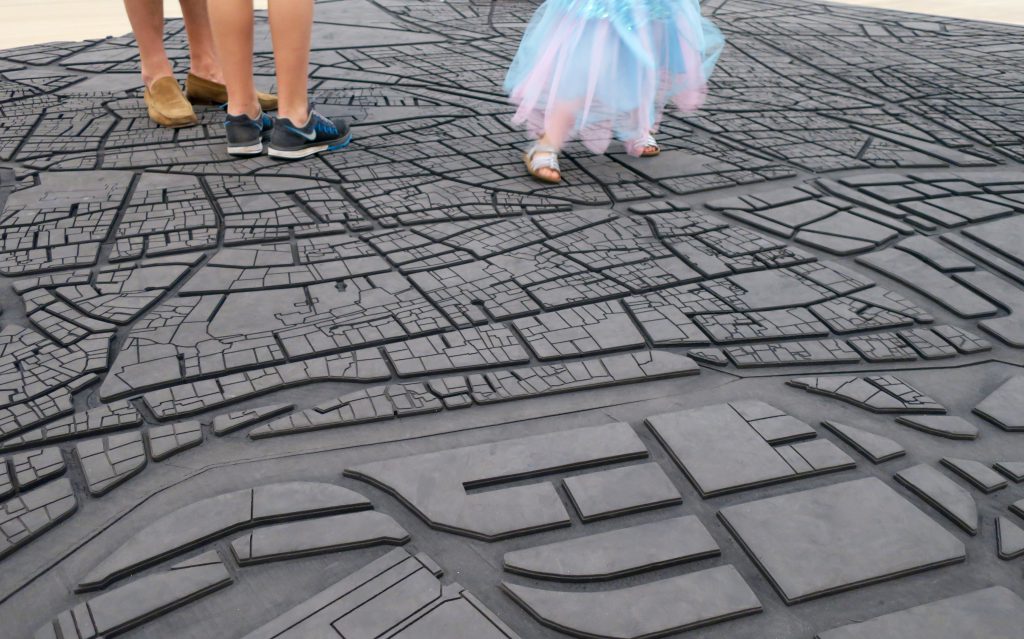 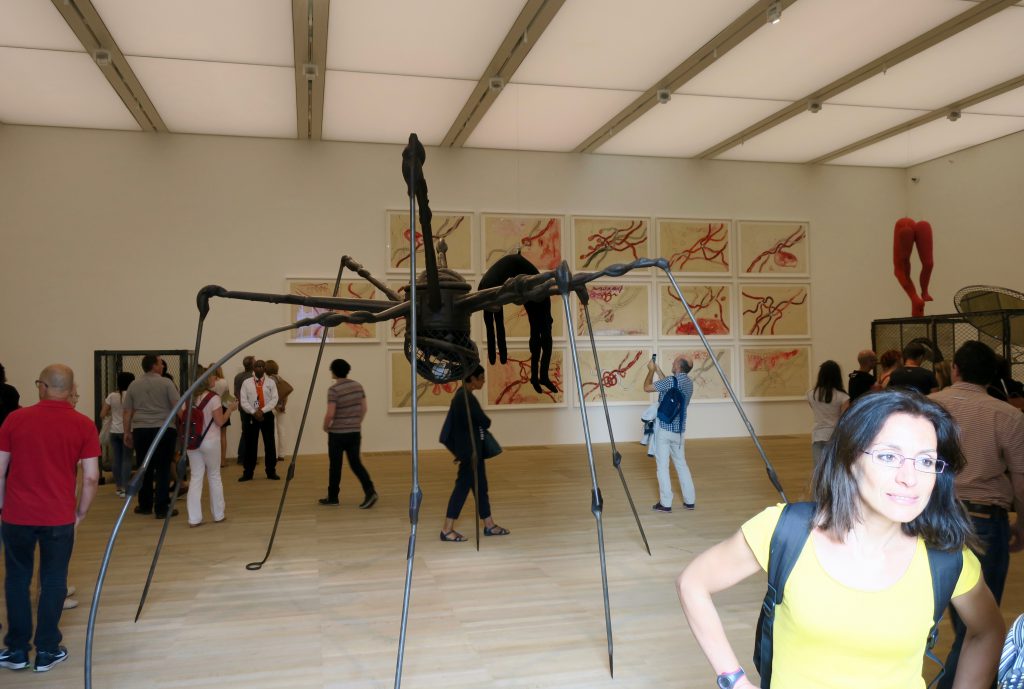 And three rooms devoted to the art of Louise Bourgeois. 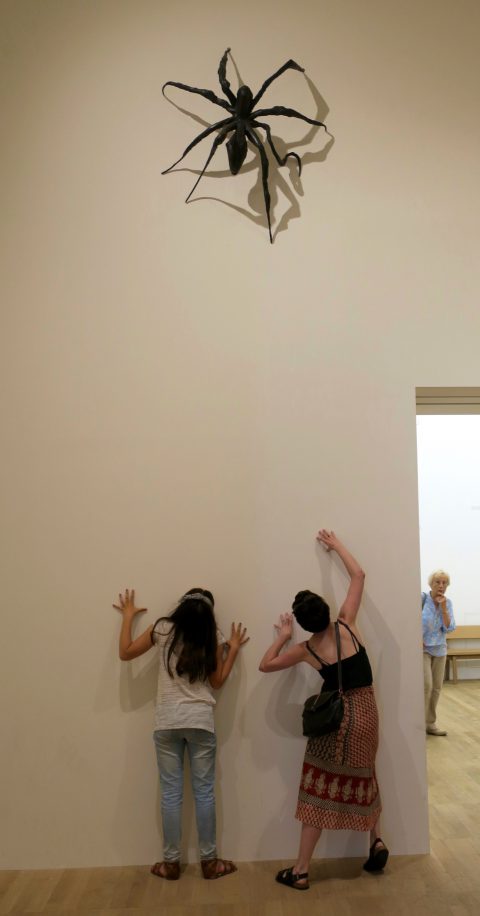 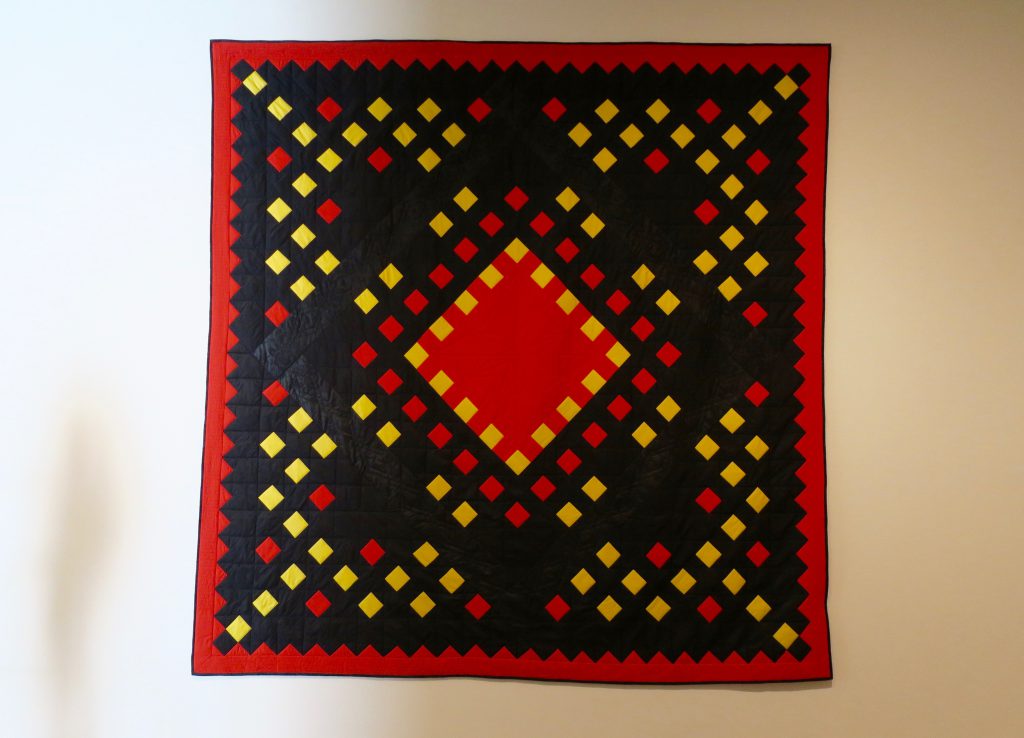 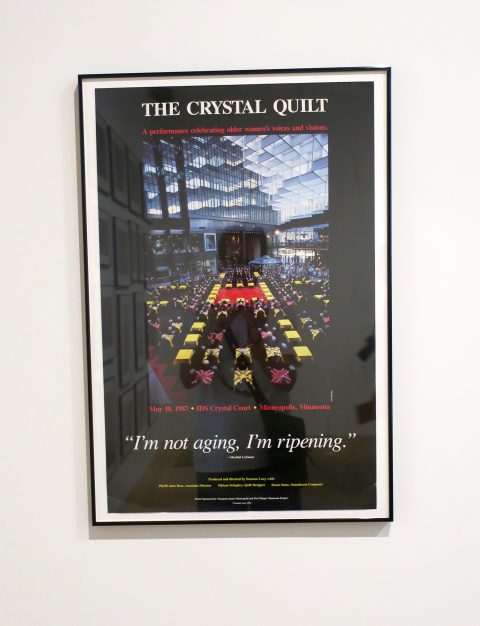 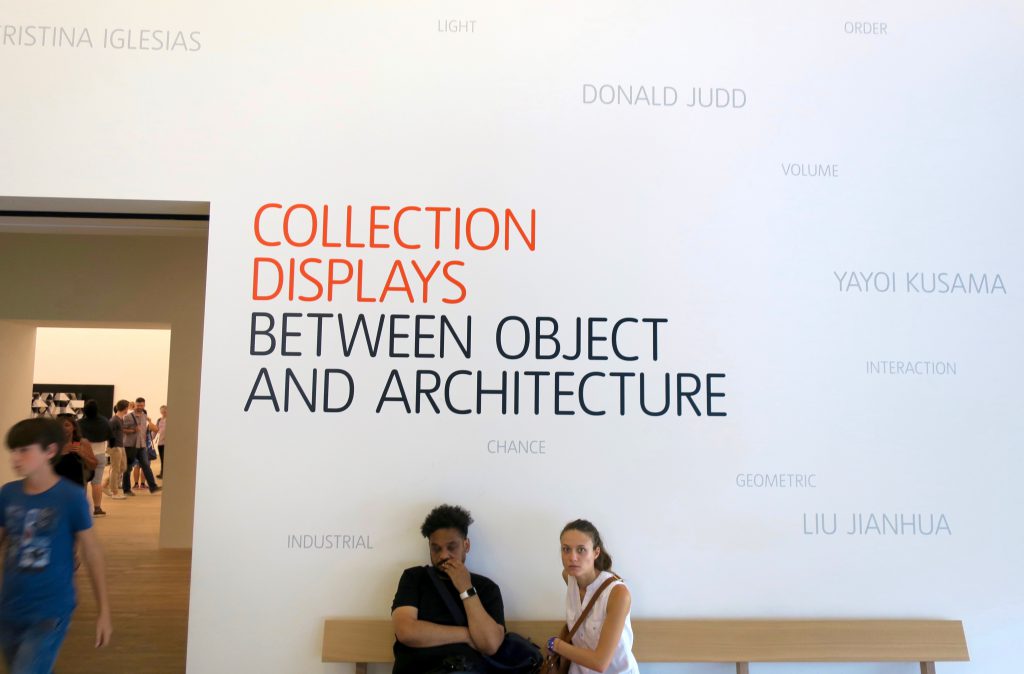 And on Level 2 there’s Between Object And Architecture. 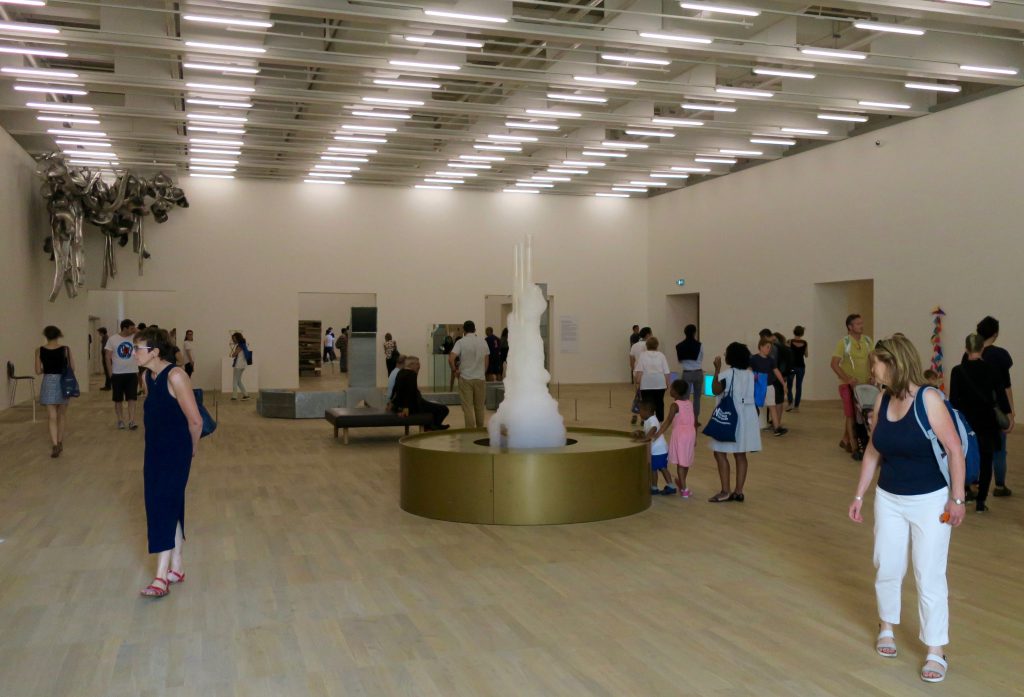 David Medalla, Cloud Canyons No. 3: An Ensemble of Bubble Machines, 1961

Among the earliest of several ‘bubble machines’ that Medalla produced at the time and first exhibited in 1964 at Signals Gallery in London, a space devoted to international kinetic art that Medalla co-founded that same year. Cloud Canyons No. 3 bears the additional date of 2004, as it was recreated that year for the exhibition Art & The 60s: This Was Tomorrow at Tate Britain. 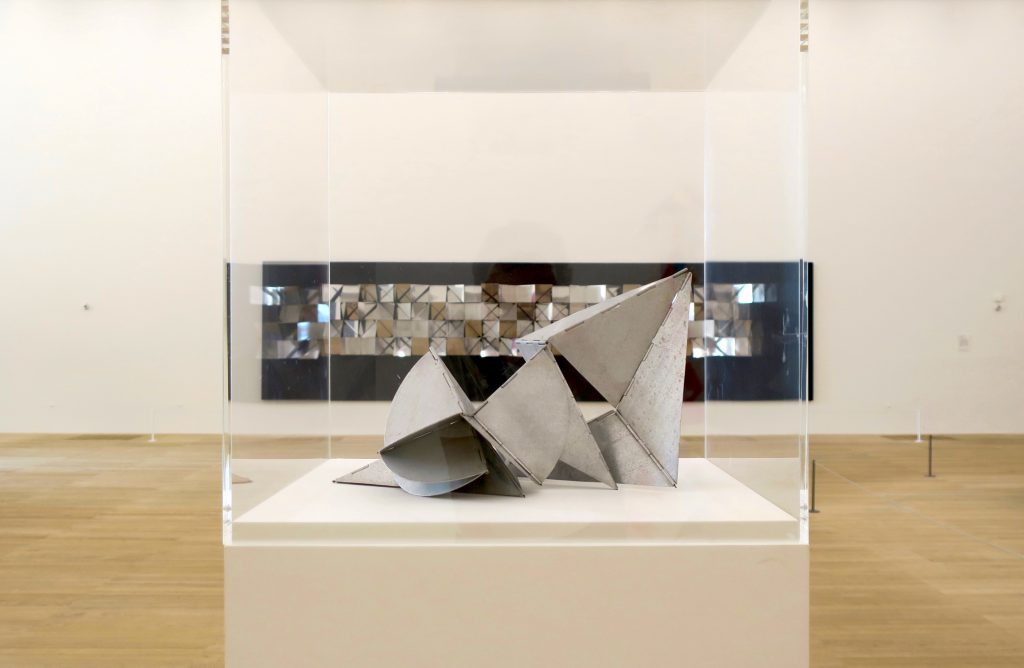 Clark made a series of geometric, hinged-aluminium sculptures which she titled ‘Creatures’, for which this is a working model. They were originally intended to be manipulated by hand, so that the sculpture offered multiple possible forms that could only be determined through the participation of the viewer. This idea of the artwork as a lived experience was increasingly important for Clark. It is underlined by the title, which encourages us to see the sculpture as a living thing. 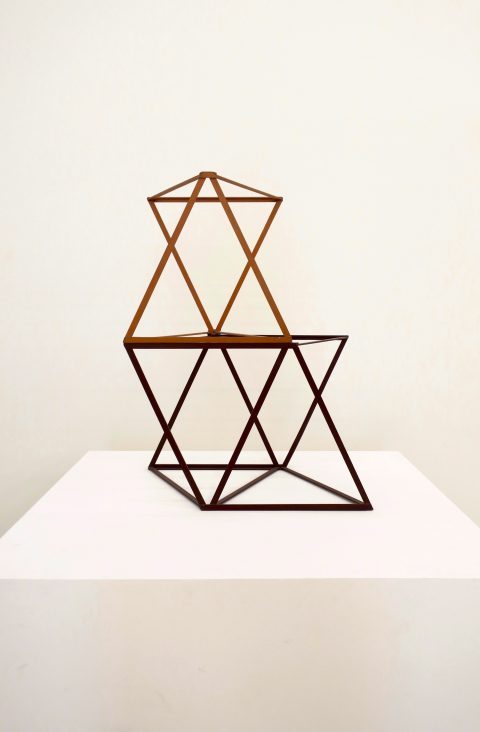 Araeen trained as a civil engineer and his sculptures are constructed using geometric forms. ‘Lovers’ combines two structures, each of which consists of a series of triangles that have been rotated and oriented in different ways. The work can be shown in two different configurations: either with the two parts next to each other, or on top of each other. This introduction of alternative possibilities challenges the idea of the artwork as a fixed object conceived by a single individual. 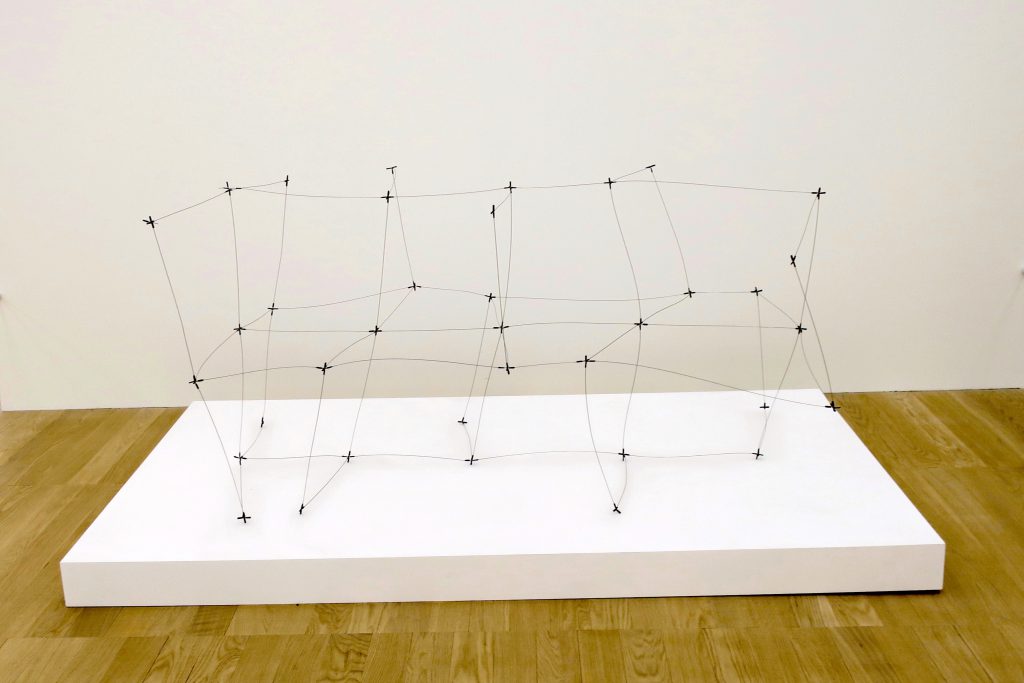 Gego’s work often relates to a tradition in modern art of using grids and geometric forms. The ‘Reticularea’ series was based on the idea of the mesh or net. These wire sculptures were composed of repeated geometric forms that were articulated and thus flexible. This grid-like form is comprised of incomplete cubes and asymmetrical polygons and its flexibility allows for distortions. As a potentially infinitely expanding pattern it is also a potential environment for the body of the viewer. 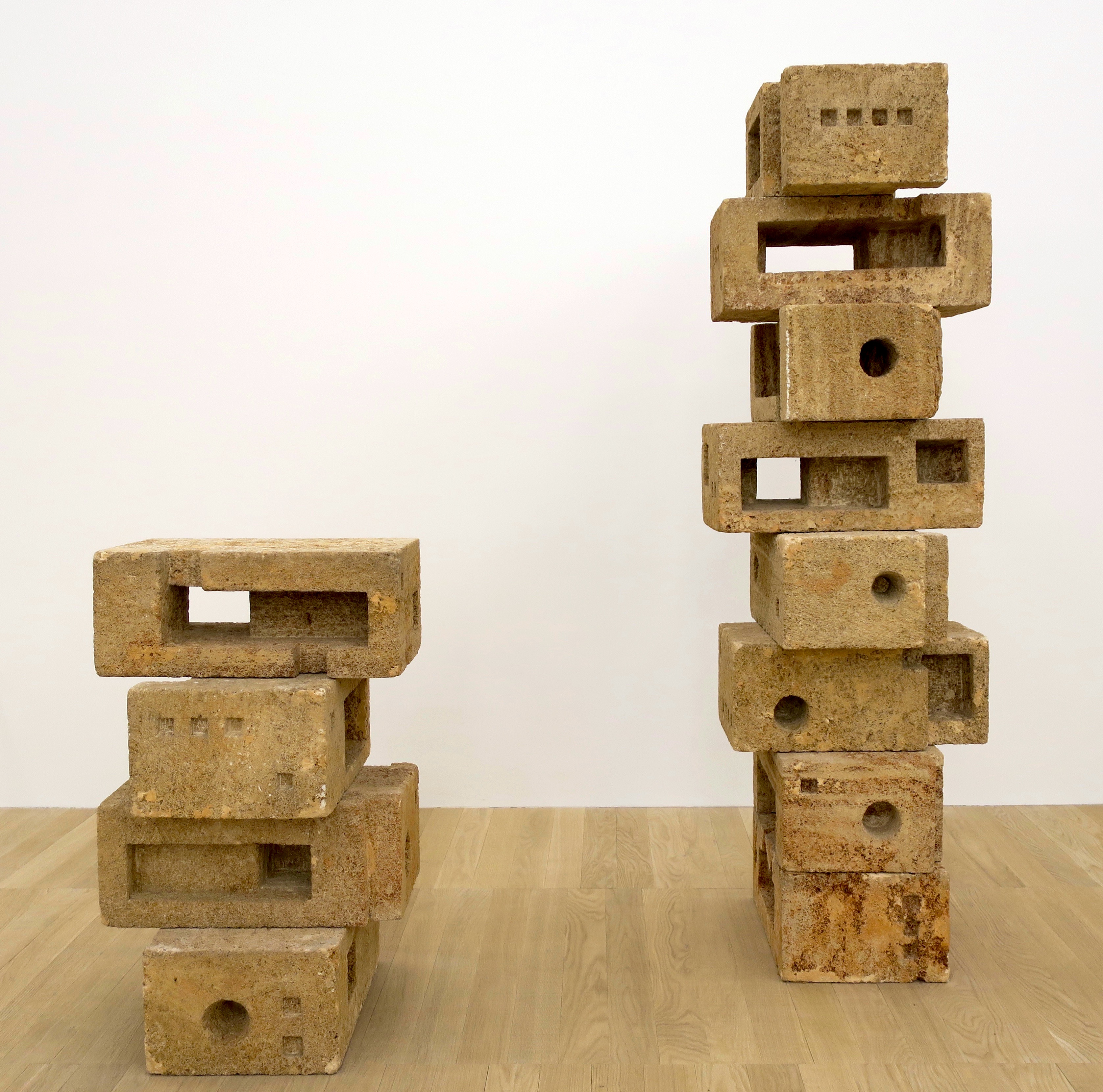 Choucair’s painting and sculpture combines European abstraction with Arab and Islamic traditions. Many of her sculptures are composed of interlocking pieces, which build to create a larger structure resembling a column or a wall. ‘Infinite Structure’, a tower of multiple rectangular stone blocks, reflects her affinity with architectural structures. Choucair once said that given another life to live she would choose to be an architect. 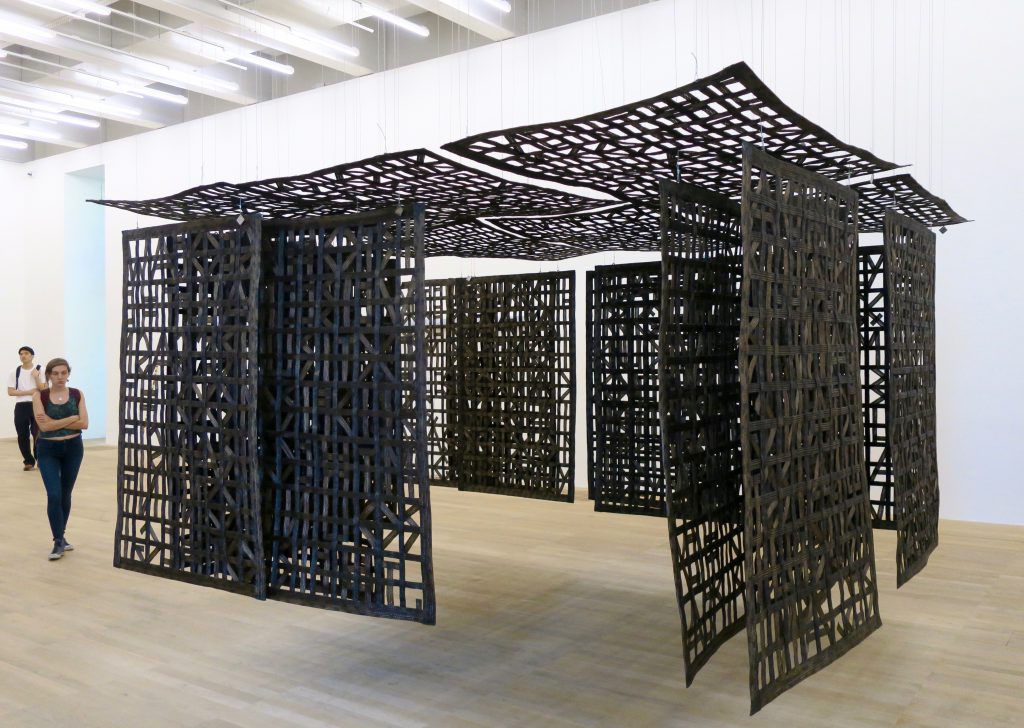 Viewers are invited to enter and explore this open-ended space, defined by a sequence of latticework panels. The filigree screens, and their atmospheric shadows highlight the opposites of mass and weightlessness, enclosure and openness, light and dark. The decorative designs seem to evoke Moorish abstract art but, on closer inspection, letters and words can be discerned. These comprise an extract from Arthur C Clarke’s science-fiction novel ‘Rendezvous with Rama’ (1973) which describes the discovery of a vast spacecraft that contains an extraordinary architectural landscape. 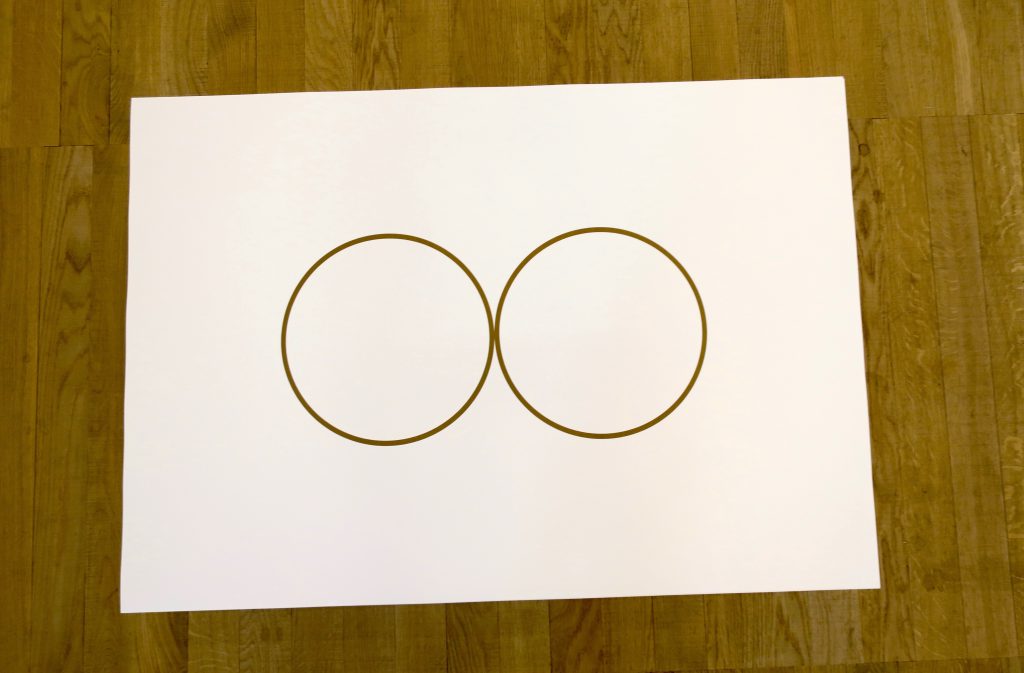 Gonzalez-Torres often used simple forms loaded with highly charged emotional and political meaning. The rings could be wedding bands, conjoined to create the symbol for infinity – and eternal love. The use of two identical circular objects occurs throughout Gonzalez-Torres’s work as a sign of ‘perfect lovers’. Their exact symmetry also alludes to gay love. 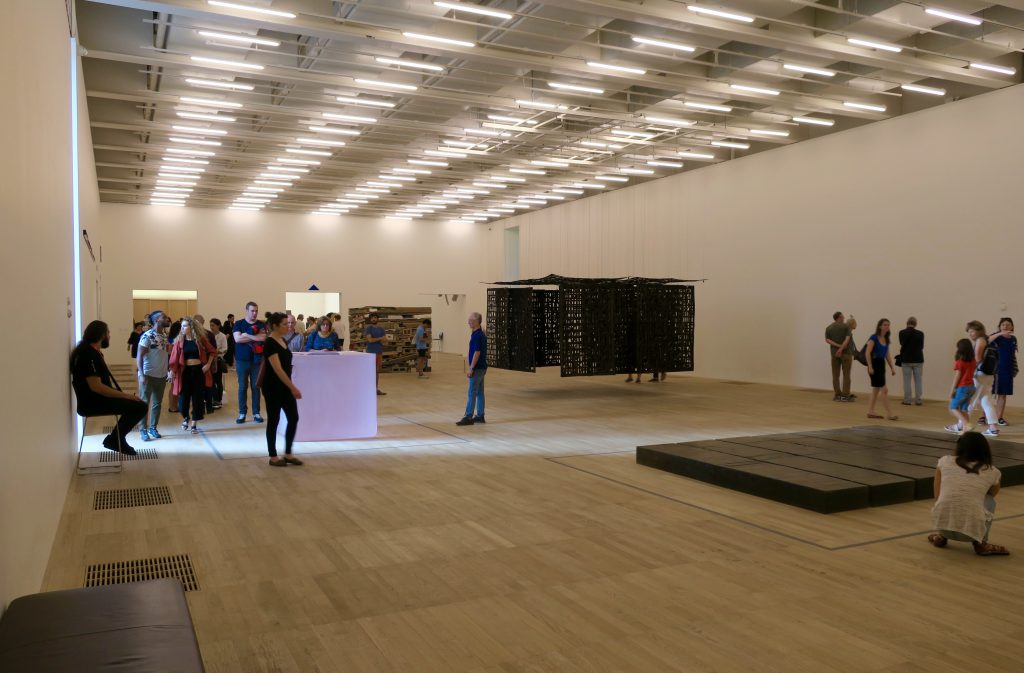 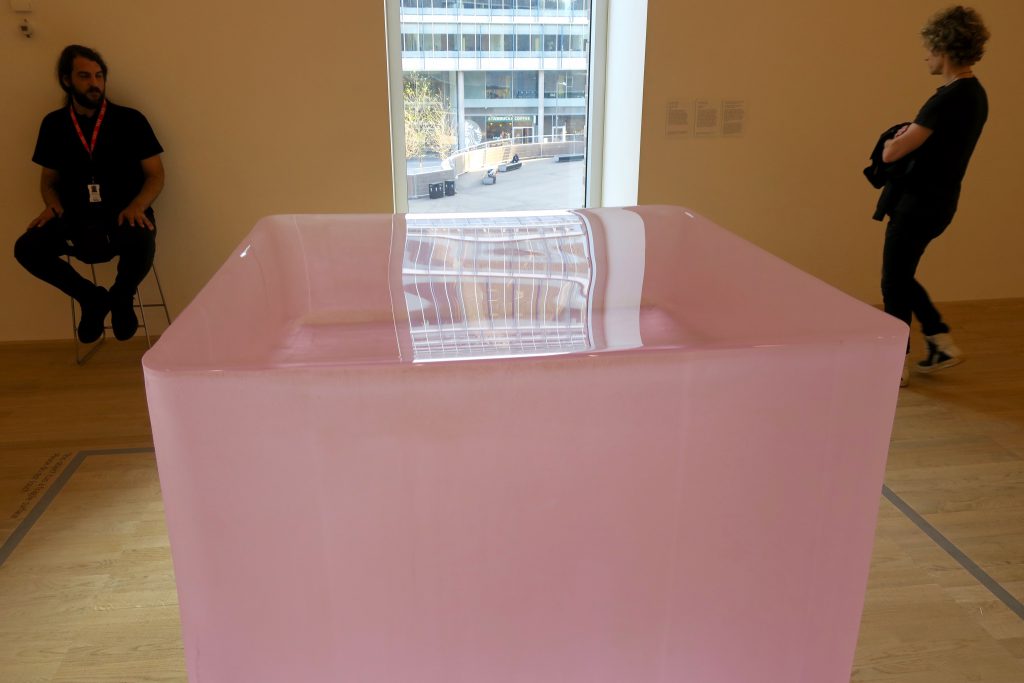 Horn is fascinated by ambiguity and processes of change. ‘Pink Tons’ is an imposingly solid presence in the gallery. Yet its appearance is continually changing, as the natural light that passes through it varies in intensity at different times of day. The sides are rough-edged, having been in contact with the surface of the mould. By contrast their top surfaces are highly reflective since here the glass has only been in contact with air during the casting process. 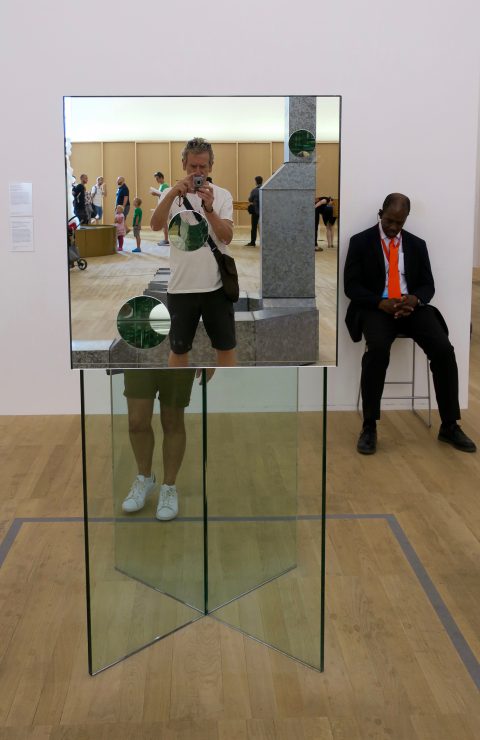 Looking into this cube, you see an interior lined with mirrors to create the illusion that the circles cut into its walls are receding into infinite space. The appearance of the interior is affected by external conditions, such as the brightness of the room it is in, and any surrounding colours which can be caught by the mirrors. The title may refer to the snow-like appearance of the floating dots, or suggest the transient, ever-shifting nature of the artwork itself. 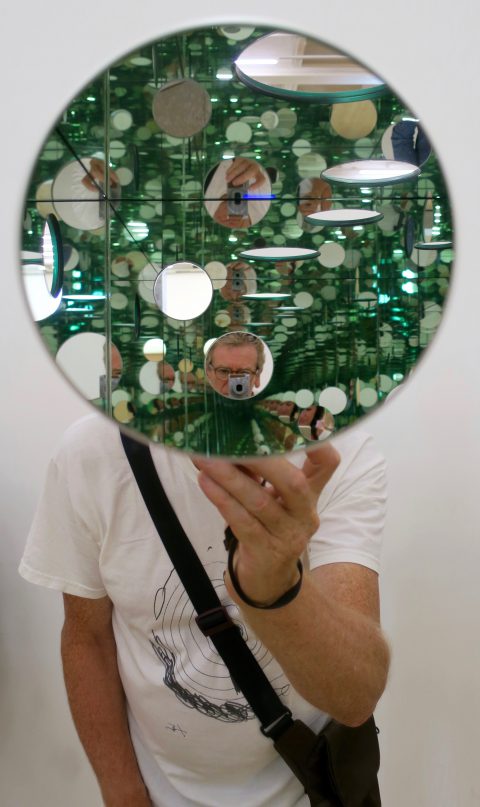 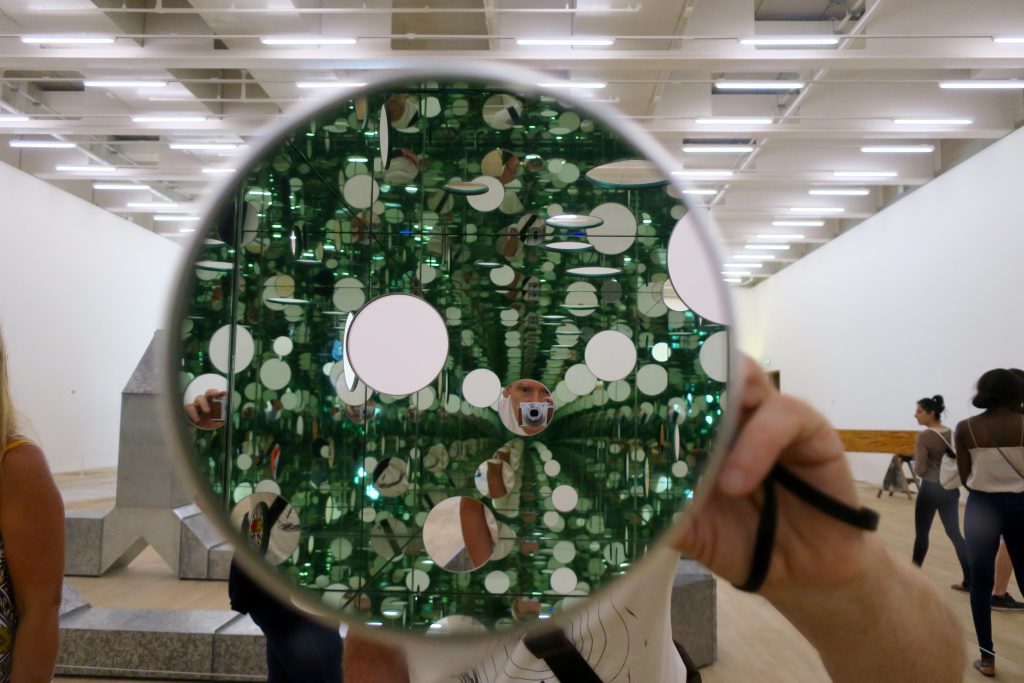 These are just a few of the artworks here that caught my eye. There are lots more by artists such as Carl Andre, Tony Cragg, Eva Hesse, Donald Judd, Robert Morris, Bruce Nauman, Rachel Whiteread and many others. It’s a great show. Many of the objects on display are beautiful and intriguing, each with their own story, but mostly they seem to describe this wonderful new building.

2 thoughts on “Between Object And Architecture”