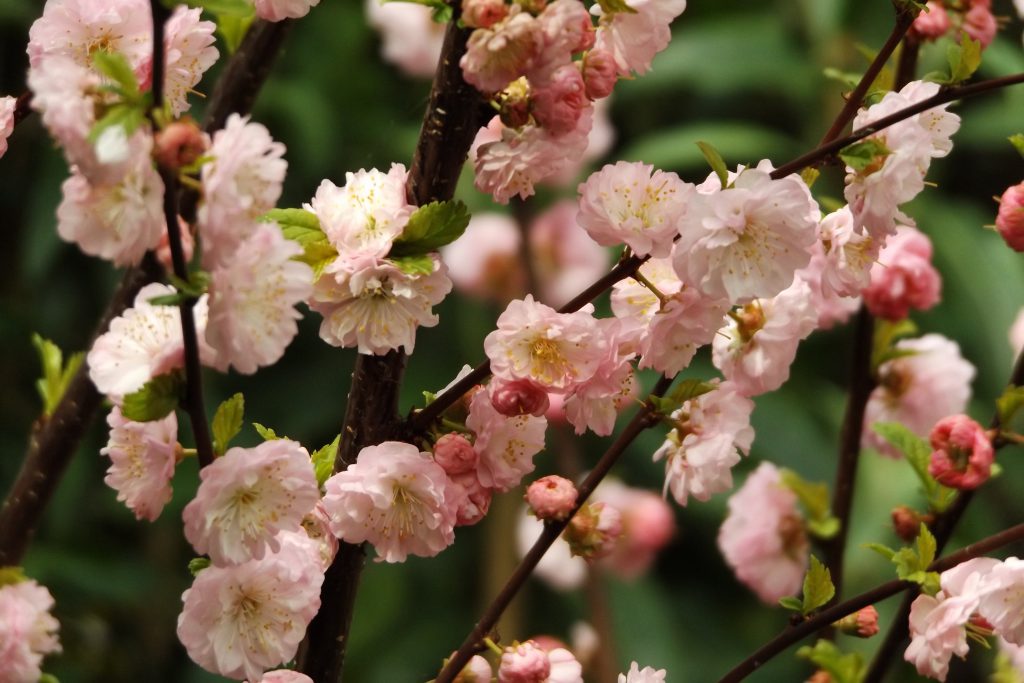 Just some of the lovely blossom that has appeared recently. This is pink cherry blossom 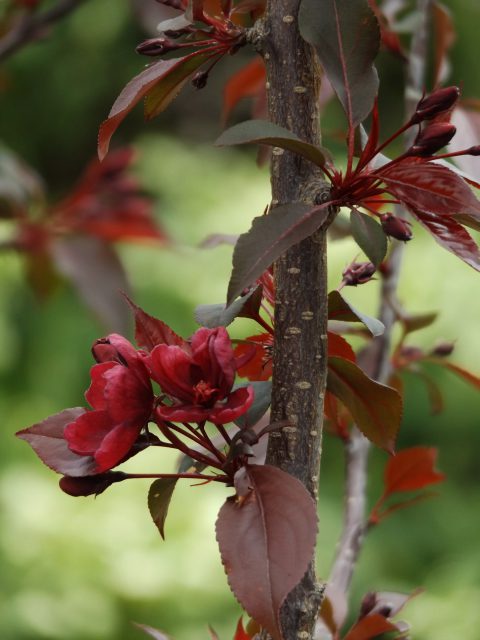 This is malus blossom. 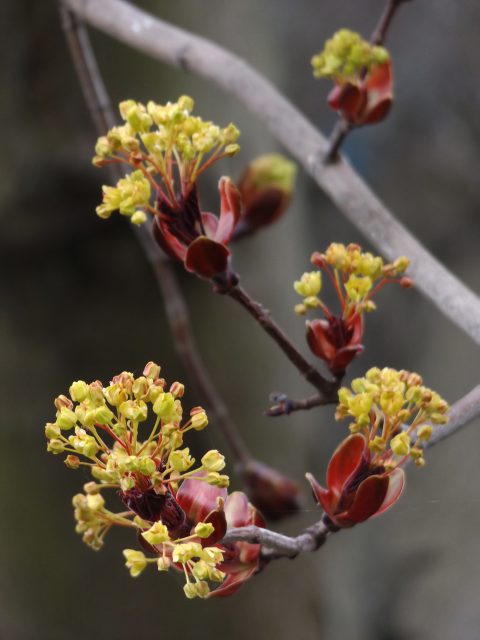 This red sycamore is in a neighbour’s garden but I couldn’t resist including it here. 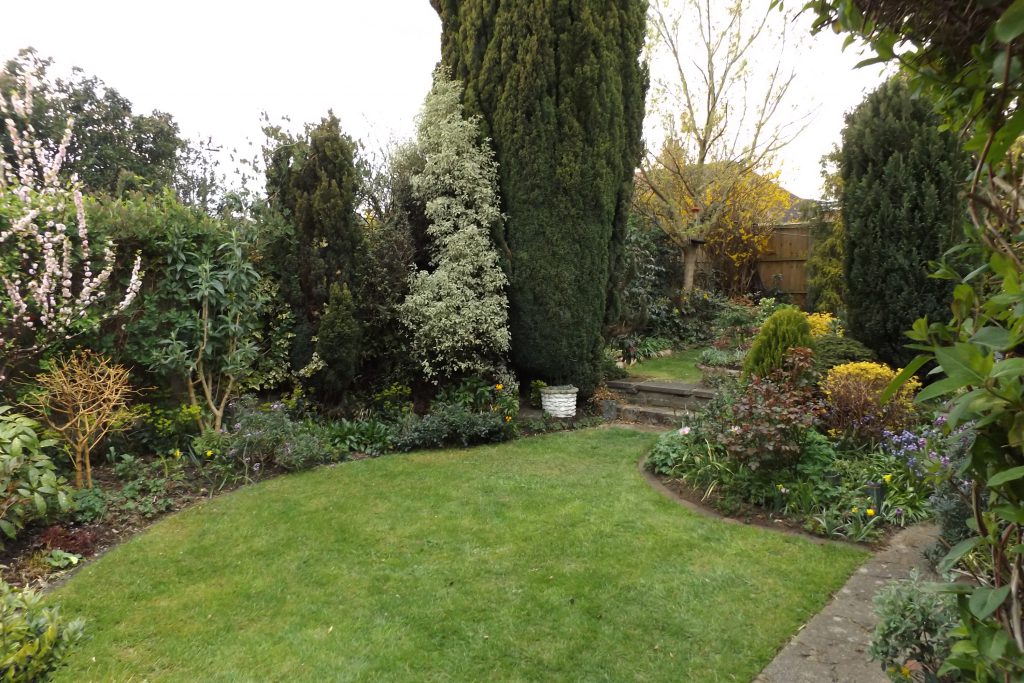 I don’t think I’ve ever posted photos of my garden as a whole so here are a few to be getting on with. 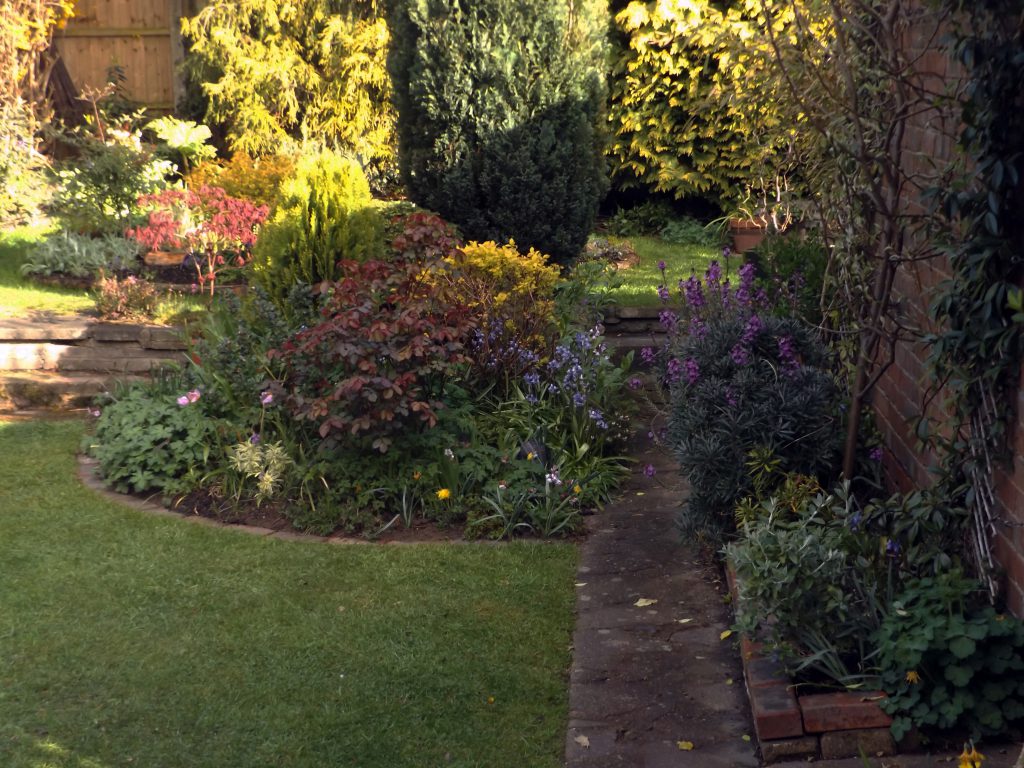 A lot has been happening on the hedgehog front since my last blog post. Medge has awoken from hibernation in the garage but is reluctant to leave the comfort of said garage (shown in photograph on right). I leave the door open ajar at night for him to get out, but he always returns by morning. He has taken to using the garage as his toilet (rather than doing his business outside) so it’s beginning to get a bit smelly. I will have to shut the door one night after he has left, but I’ll wait until the weather is a bit warmer – I’d hate to make him homeless on a cold night.

I’ve suspected for a while we might have two medges, as his size seemed to fluctuate on the occasions I have seen him (that or my eyes are playing tricks on me). The medge that trundled down the garden path looked somehow bigger than little garage medge. So, I hit upon a plan to discover if they were one and the same medge or indeed two medges. Making sure garage medge was at home, I shut the door to prevent egress. I then sat at the bottom of the garden at twilight (what will the neighbours think?) to await medge activity. I didn’t have to wait long – a shuffling sound was heard from the purpose-cut hole in the fence just feet away from where I was sitting. Out popped a large hedgehog – to be closely followed by a smaller one. Now I’m even more confused.

So now we have three medges. I must confess to a certain amount of smugness, knowing that our garden is a des res for hedgehogs, considering how much their numbers have declined in recent years. Who knows, we may have a whole herd of medges by the end of the year. Incidentally, what is the collective term for a group of hedgehogs? Answers or suggestions, please! 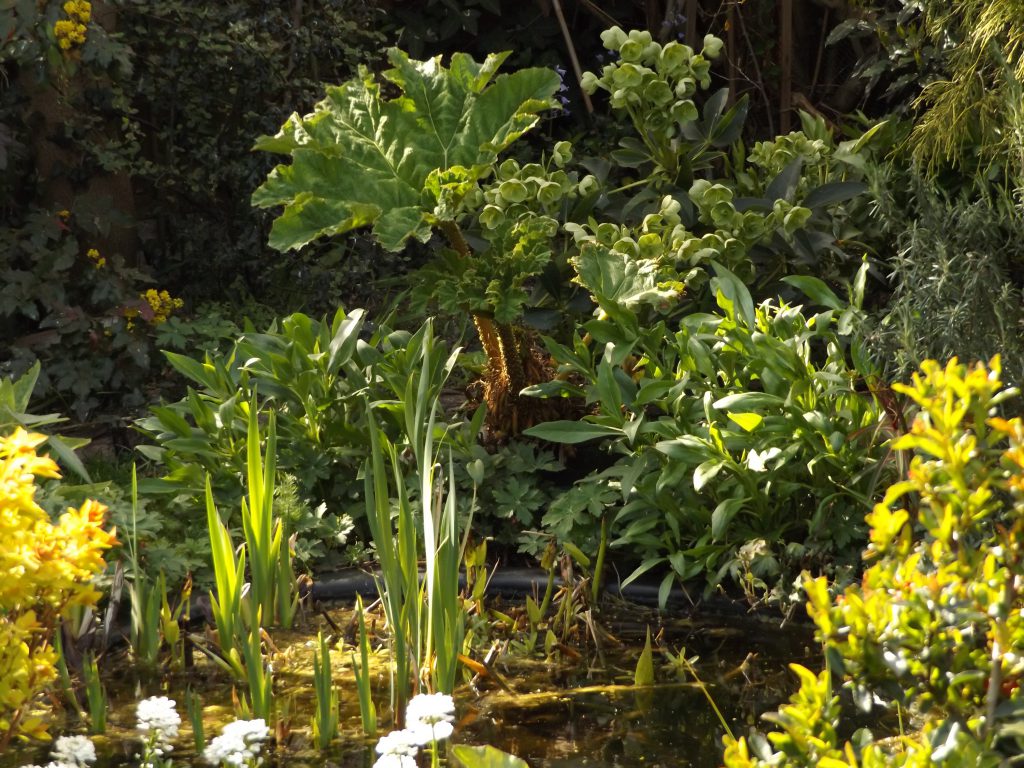 We have quite a lot of moss in the grass. Certain parts of the garden (the pond area) get very little sun during the winter months and the moss has thrived in the shadows thrown by conifers. Normally after the first cut of the lawn I rake it all out to allow the grass to come through again. However, I quite like the look of moss – it’s a lovely shade of green and forms spongy hummocks that don’t require mowing. So I’m going to experiment this year and leave it be. It could be a disaster – I may end up with crispy brown moss by July but I’m prepared to live dangerously. I also like the clover – that can stay too. Who says you have to have a perfect grass lawn? I’m not in to all that pitch and puttery. 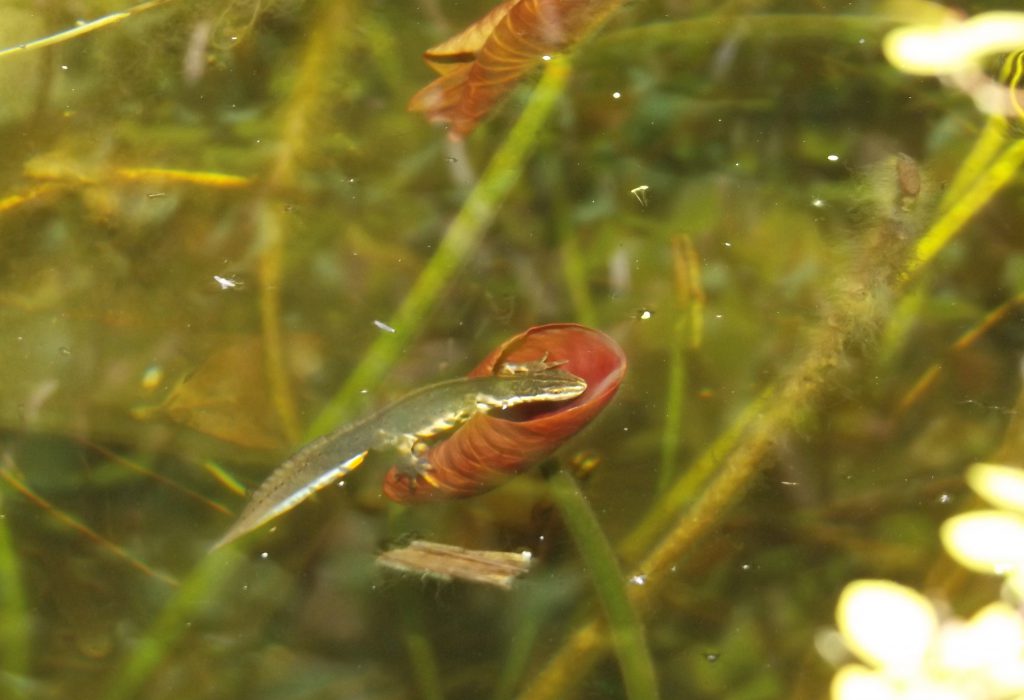 In the spring newts spend their time in water mating and laying eggs. There have been lots of newts in the pond this year and it’s been a pleasure watching them swimming about. Today I saw a lovely mature male specimen on a submerged water lily leaf that I managed to photograph. It’s a bit foggy as it’s underwater, but you can just make out another newt deeper down in the bottom left corner. 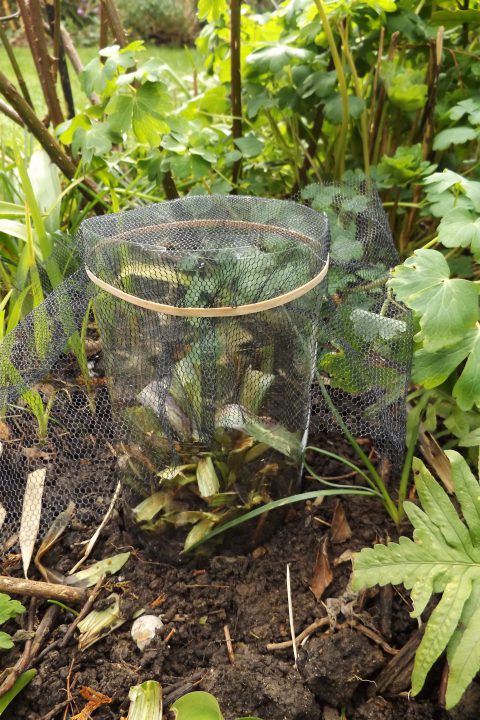 Those pesky slugs and snails are lurking about in the garden again, and thoughts turn to protecting certain young plants they are partial to snacking on. Copper tape is good for around pots, but copper rings around plants in the soil are all but useless – those crazy gastropods just abseil in from nearby overhanging plants. And glass or plastic cloches just kill the plants on the day that started out overcast, heated up to 25 degrees by noon and you’re miles away at work and can’t get home to free the poor plants from being steamed alive. So – necessity breeds invention.

Wearing your best Blue Peter badge, take one 2-litre plastic pop or water bottle. Cut the top and bottom off to leave a clear cylinder. Place this over the plant, screwing it down into the soil an inch or two (you may need to get a trowel to help break in to the soil). Make sure there are no slugs or snails hiding in the plant or you’ll have no plant left by morning. Take a piece of dress netting (the sort they make ballet dresses out of) and place this over the top of the bottle. Cut it big enough so you can secure it in place with a rubber band. Hey presto! A barrier slugs cannot get through, but one that allows air and water in to the plant. Maybe I should patent it – this time next year I could be a millionaire… 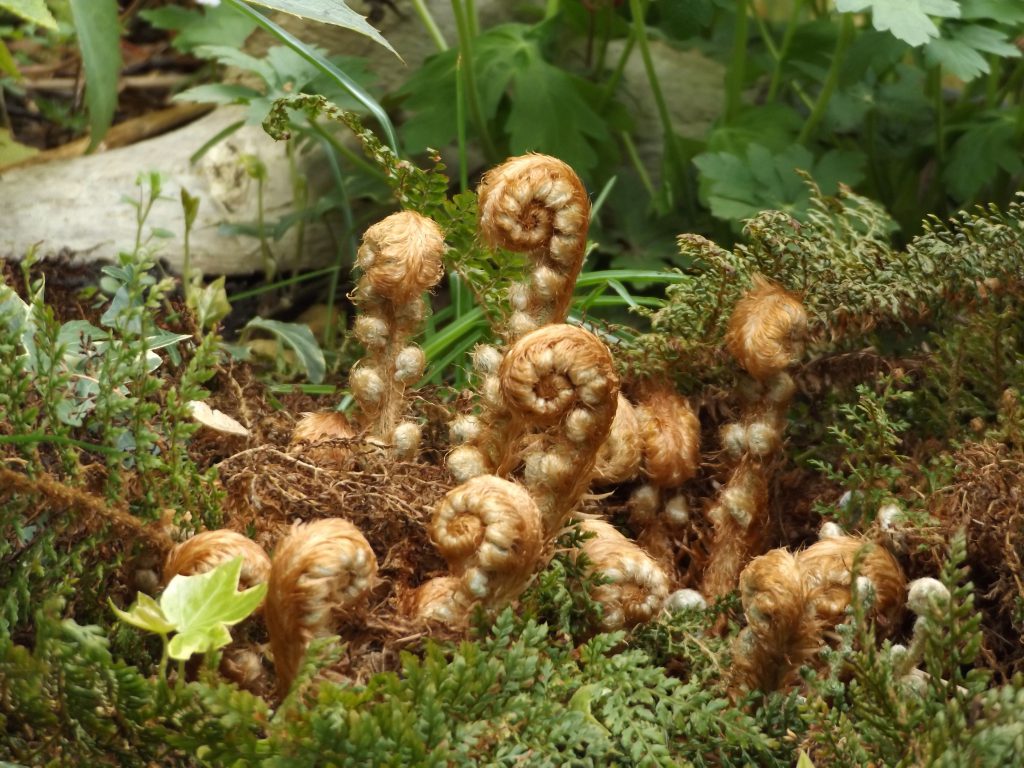 These ferns unfurling themselves beside the pond feel as soft and furry as they look. 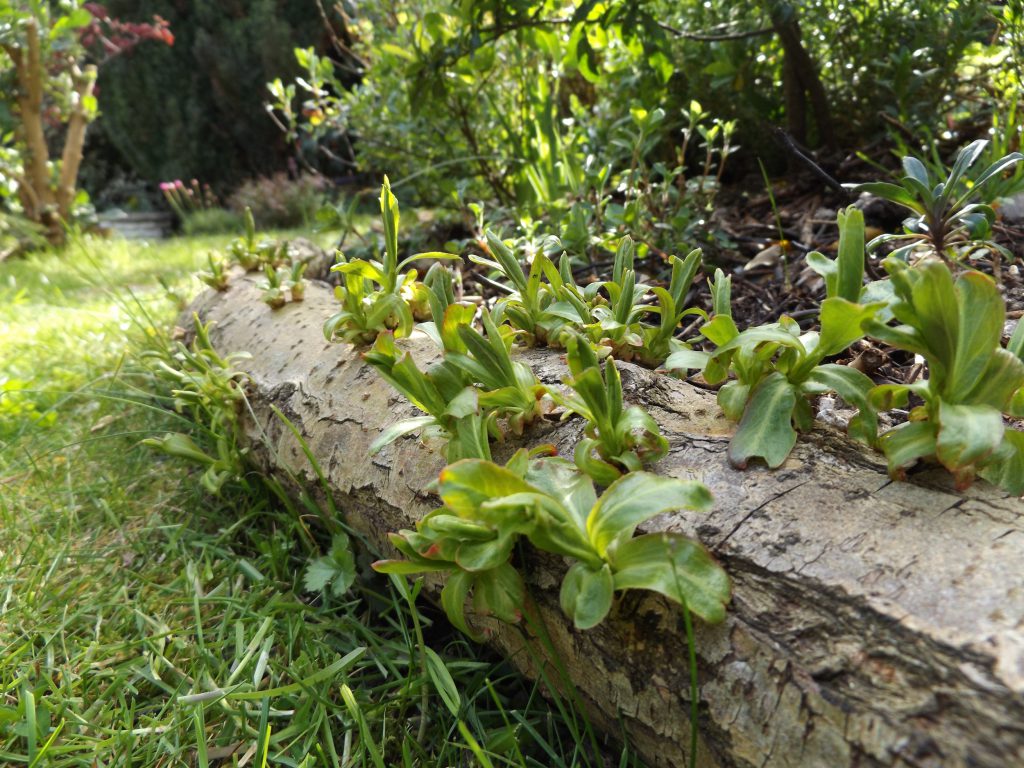 The freshly cut branches I bordered the pond with at the start of the year have started to sprout. Shame they won’t last, but it just goes to show how much energy is stored within the log to allow this to happen. 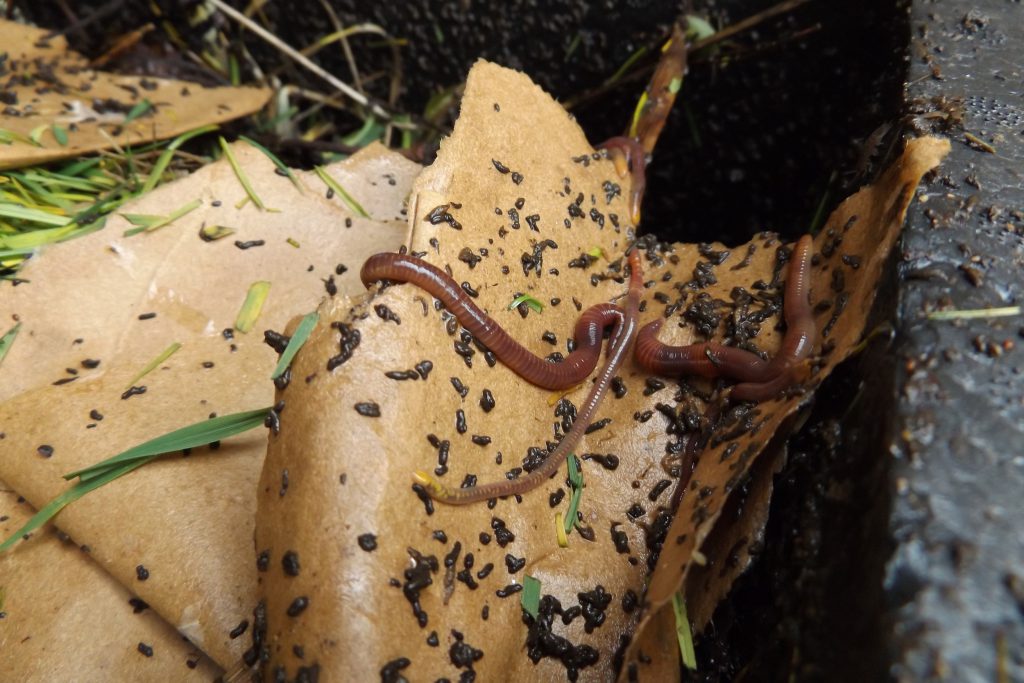 I lifted the lid of the compost bin the other day to be greeted by the familiar sight of dozens of worms going about their business. It is immediately apparent how worms are nature’s recyclers – as you can see from the amount of worm poo there is on the paper bag I’d torn up earlier. This all contributes to making lovely compost – earthworm humus (vermicompost) is supposed to be considered by some to be the best organic manure there is. 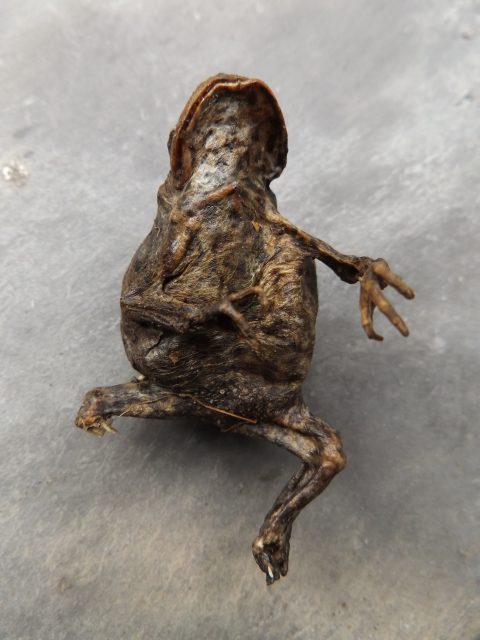 I found this today while digging. We’ll never know how this poor little chap met his end, but I’ll bet dollars to donuts that a cat was involved somewhere. Frogs can scream when under threat – the voice of which is not unlike a crying baby. I heard one a few years ago and followed the sound to the bottom of the garden where a cat had surely cornered a frog. I chased the cat away, but it seems our garden will always be a hazardous place for slow moving amphibians. 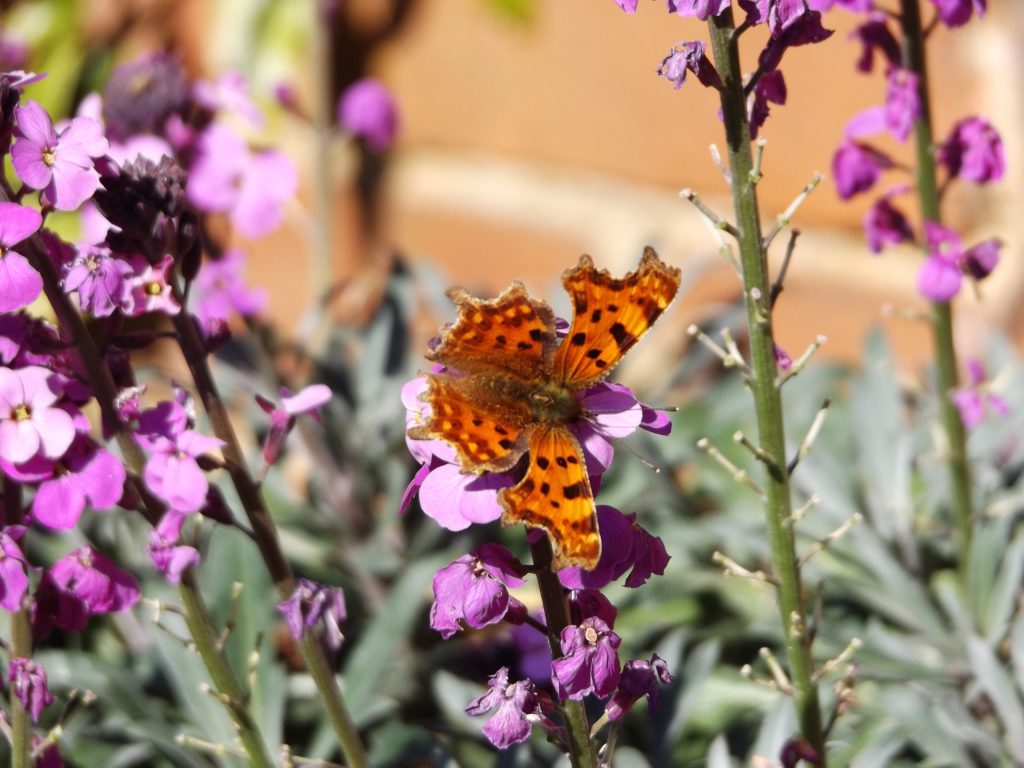 An early sighting of a comma butterfly feeding on Erysimum ‘Bowles Mauve’. In an attempt to get a female to lay eggs in the garden I am growing a patch of nettles (its food plant) in the front garden. If you grow nettles in a dedicated patch alongside other lush foliage plants it’s amazing how many people are fooled into thinking it’s a ‘proper’ garden plant. Nettles are also the principal food plant for caterpillars of Peacock, Small Tortoiseshell and Red Admiral butterflies.

5 thoughts on “An April Garden”