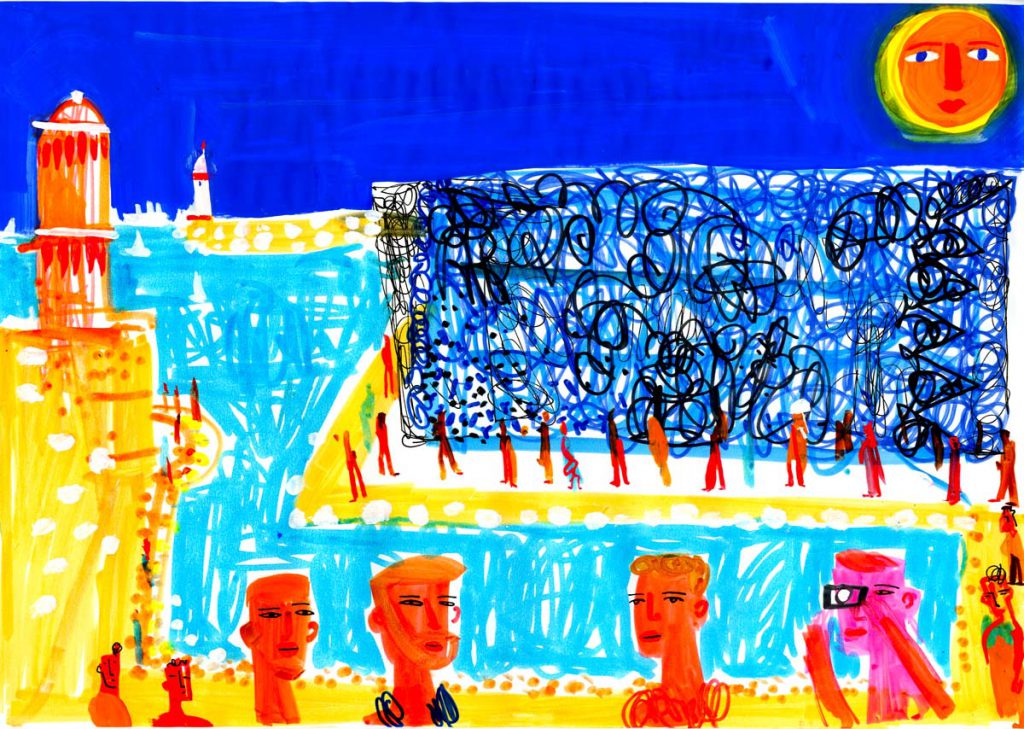 MuCEM was opened in 2013 as part of the Marseille Capital of European Culture celebrations. The museum is dedicated completely and totally to the Mediterranean, to its history, civilisations and its culture. It’s all about the life that has developed out of the Mediterranean from its earliest histories to the tensions and conflicts of our own time. 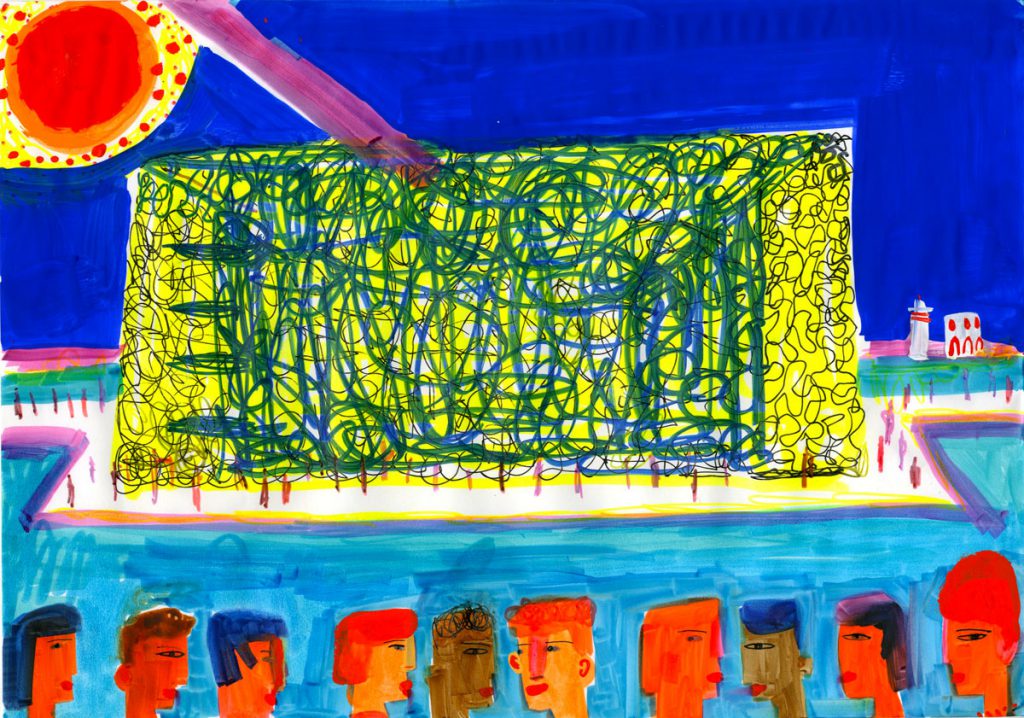 It’s the first museum in the world to focus on the Mediterranean in this way. The permanent collections and the programme of changing exhibitions all reflect this philosophy: from its agriculture, gods, migration, arts, history and culture. 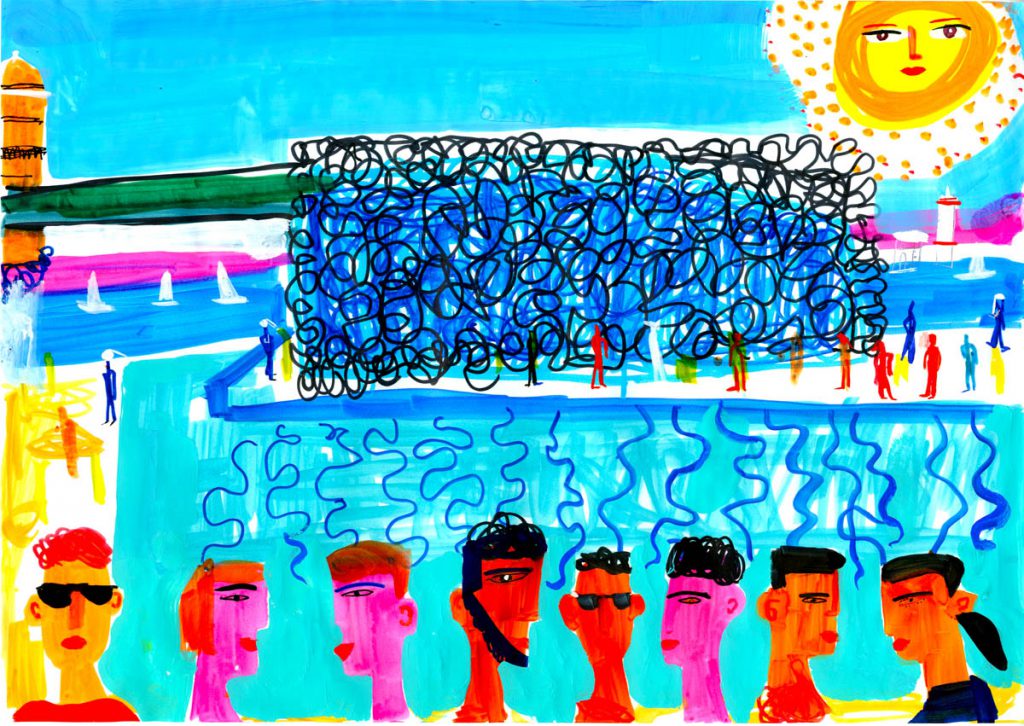 Marseille is a Mediterranean city, founded by the Greeks around 600 BCE and over the years the city has become home to people from everywhere. It feels like a Mediterranean city and its citizens love the sea. If you walk along the Corniche in the late afternoon and evening you will see all kinds of people sunbathing, swimming, playing in the water, fishing or relaxing. There are natural pools and man-made ones and little coves and inlets where people commune with the waters. 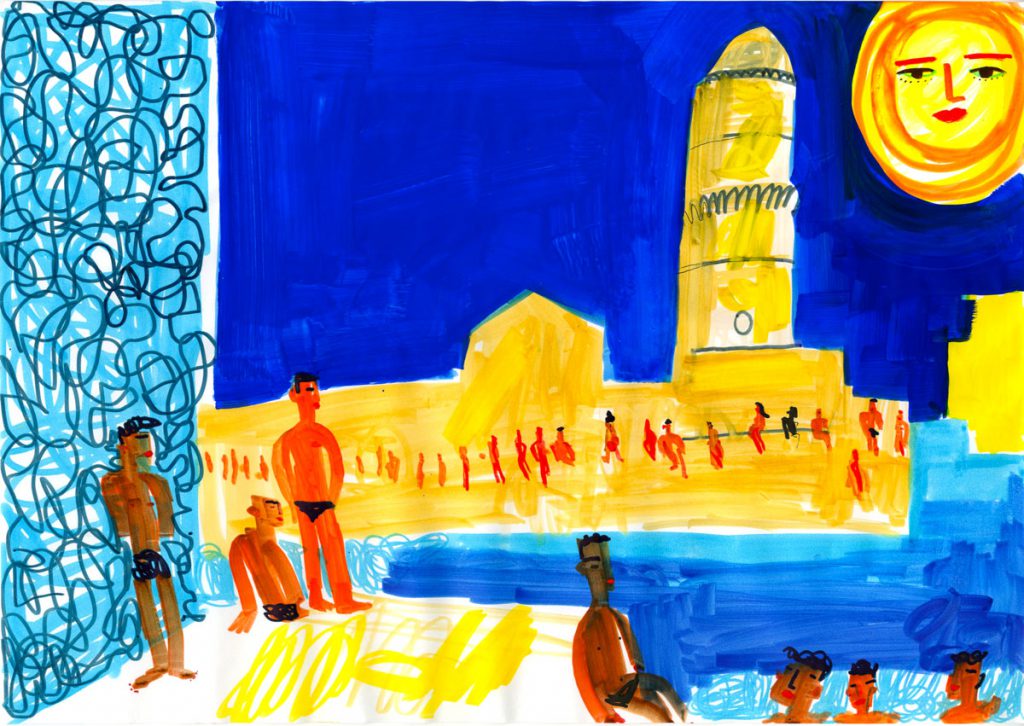 The architect of MuCEM is Rudy Ricciotti, an Algerian born of French and Italian heritage. He said he wanted to create ‘a vertical Casbah’. The building has a distinctive appearance, with external walls of lace-like moulded concrete. This material gives light and shade and views over the Med and provides protection from the glare of bright sunlight. The structure looks like the sea, shimmering and rippling in the bright sunlight. The location of the museum is important and significant, built on the traces of the ancient Greek and Roman docks. It looks out over the Mediterranean on two sides and on another to the 17th century stronghold of Fort St Jean. 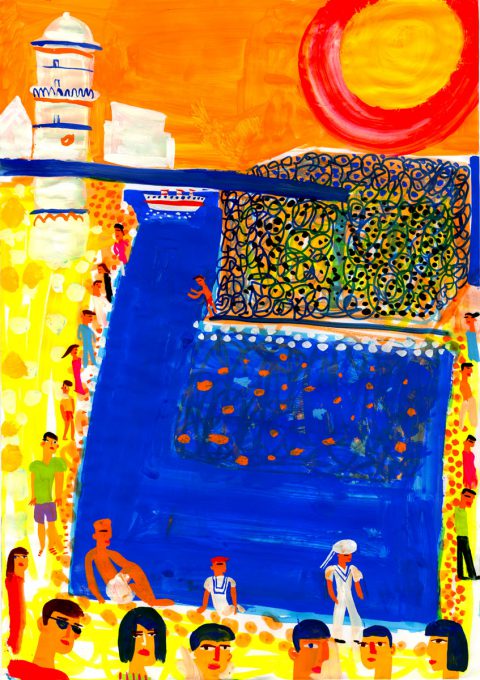 The ground plan is square shaped; each wall is 72 metres long. Inside the latticework concrete there are two interlacing ramps that give access to the three floors of exhibition halls, conference hall, theatre/cinema space and bookshop. On the top floor is an open-air café space with astonishing panoramic views of the sea and there is a 115-metre bridge that leads to the Fort. The views from the bridge are amazing and a little vertiginous. This side of Marseille is being developed as a museum quarter. It was also the site of the pier where ships departed in WW2 taking fleeing artists and émigrés to safer lands. 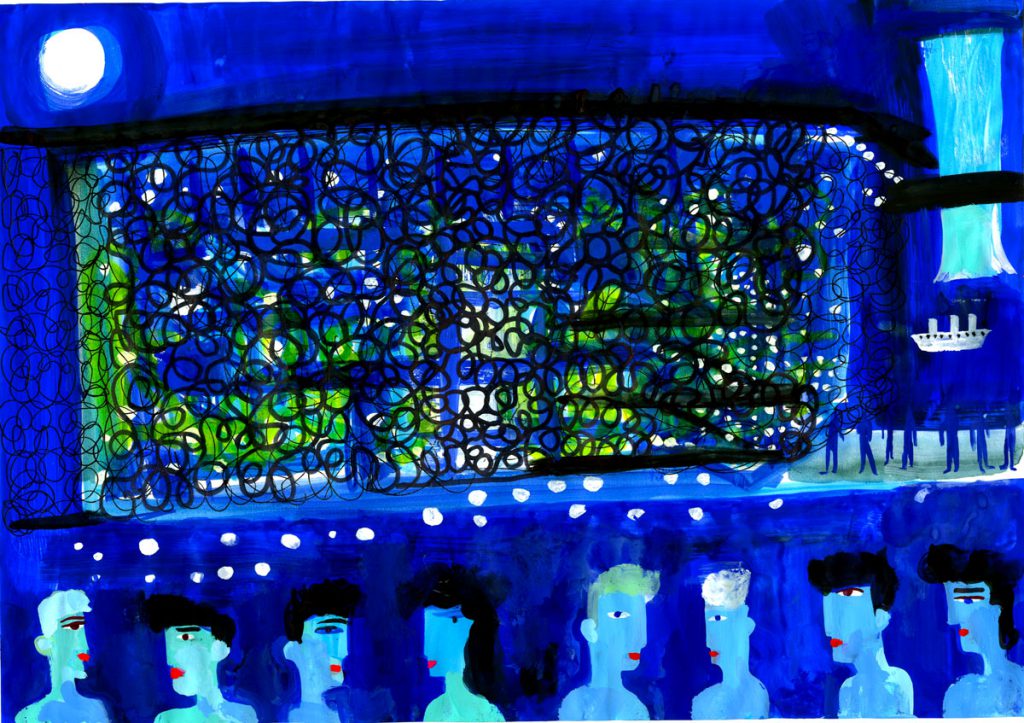 It’s an exhilarating structure, the light and shade, the openness to the sea and its breezes are all very sensual. It is a style of architecture that pays homage to the character of Marseille.
At night the building shines with blue lights in the darkness and looks quite otherworldly, glowing like an industrial plant. 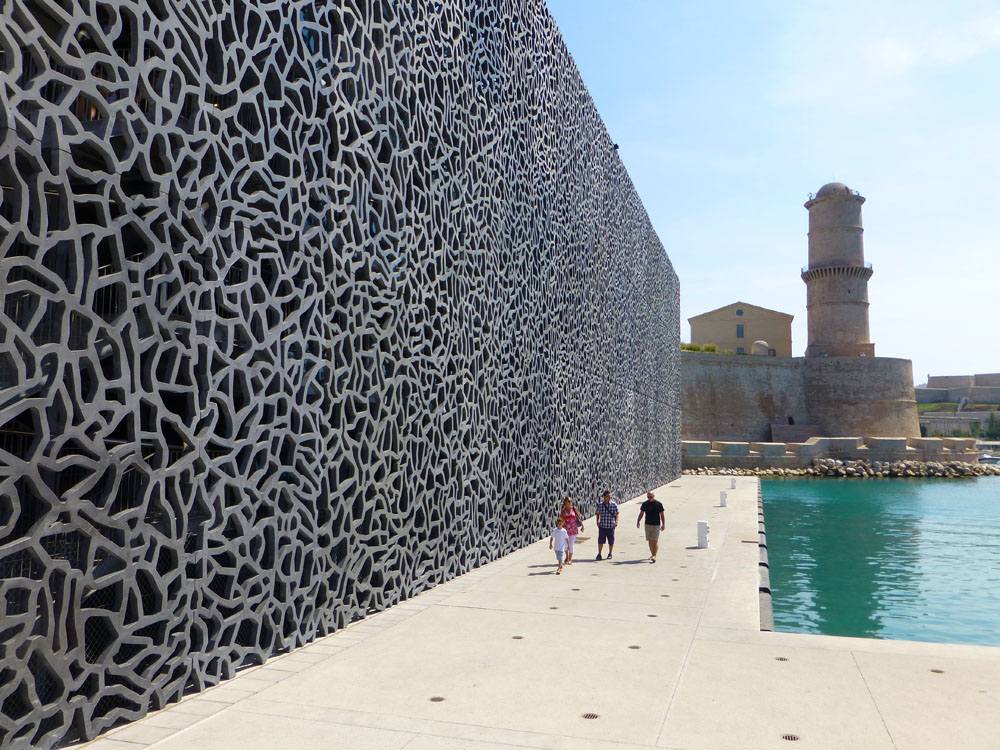 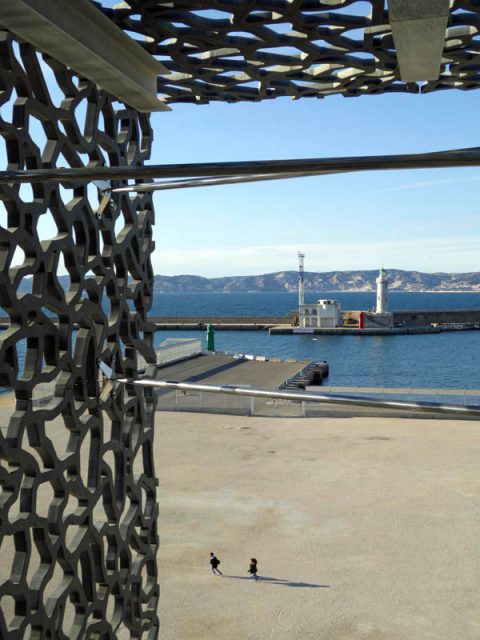 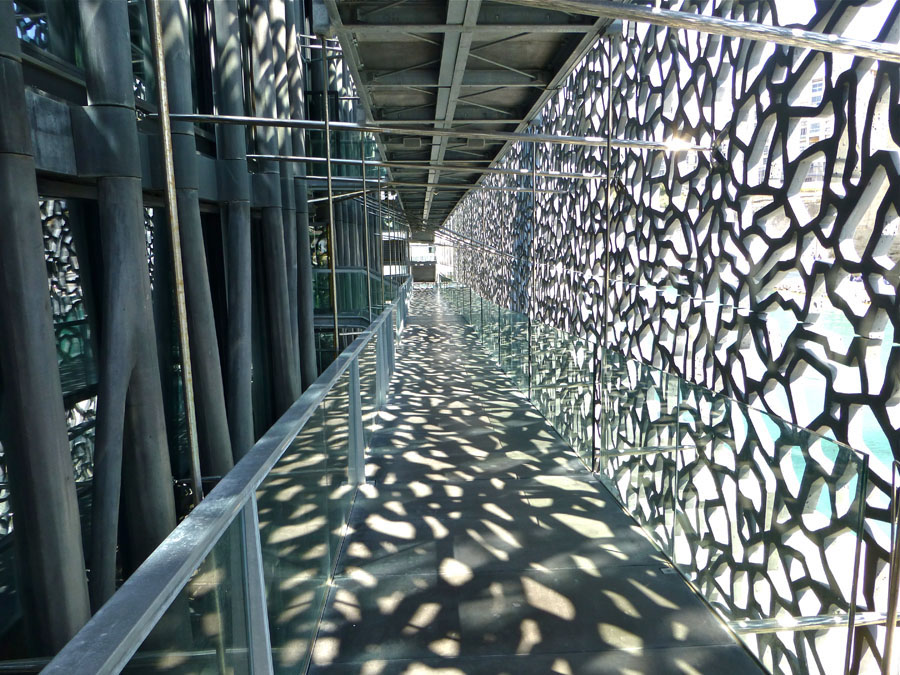 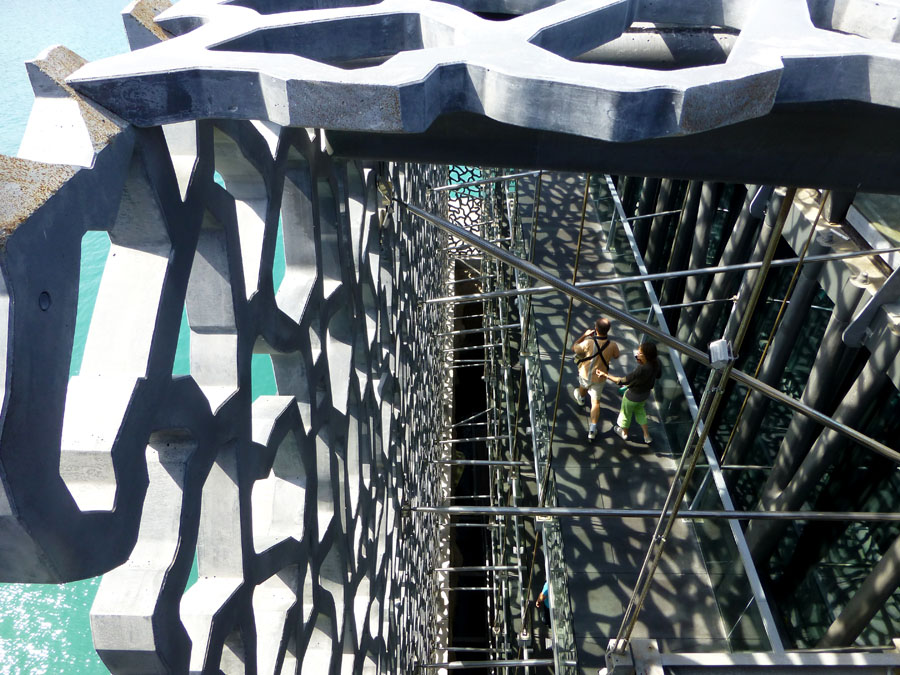 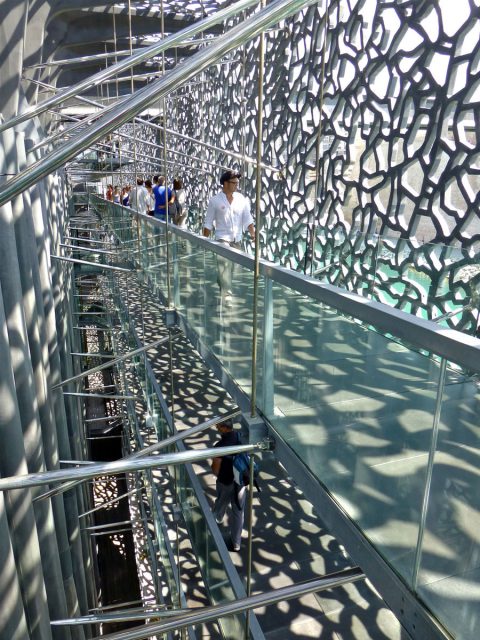 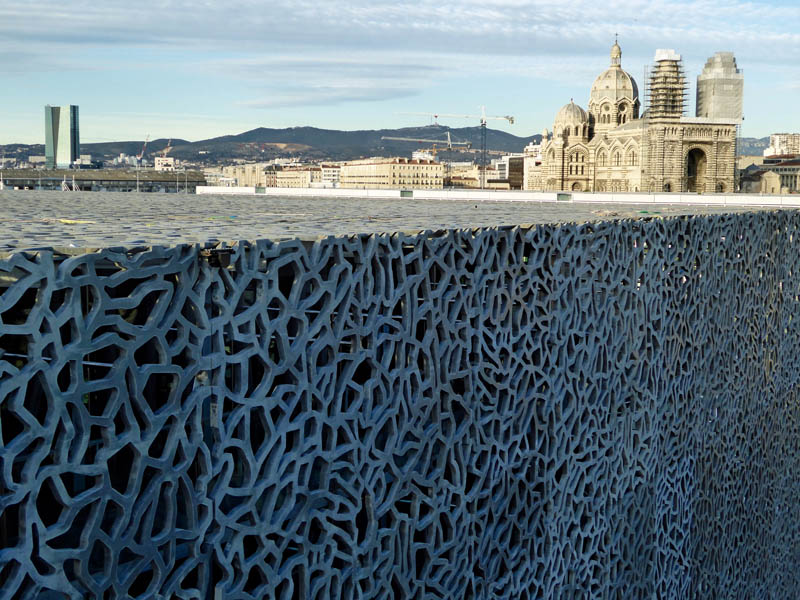 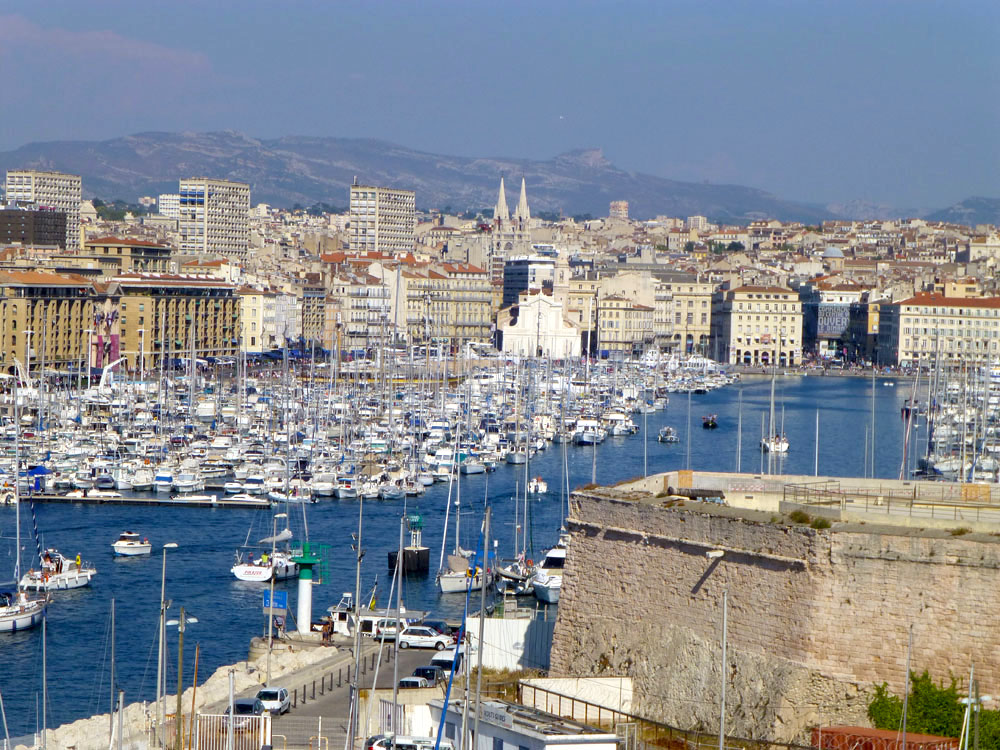 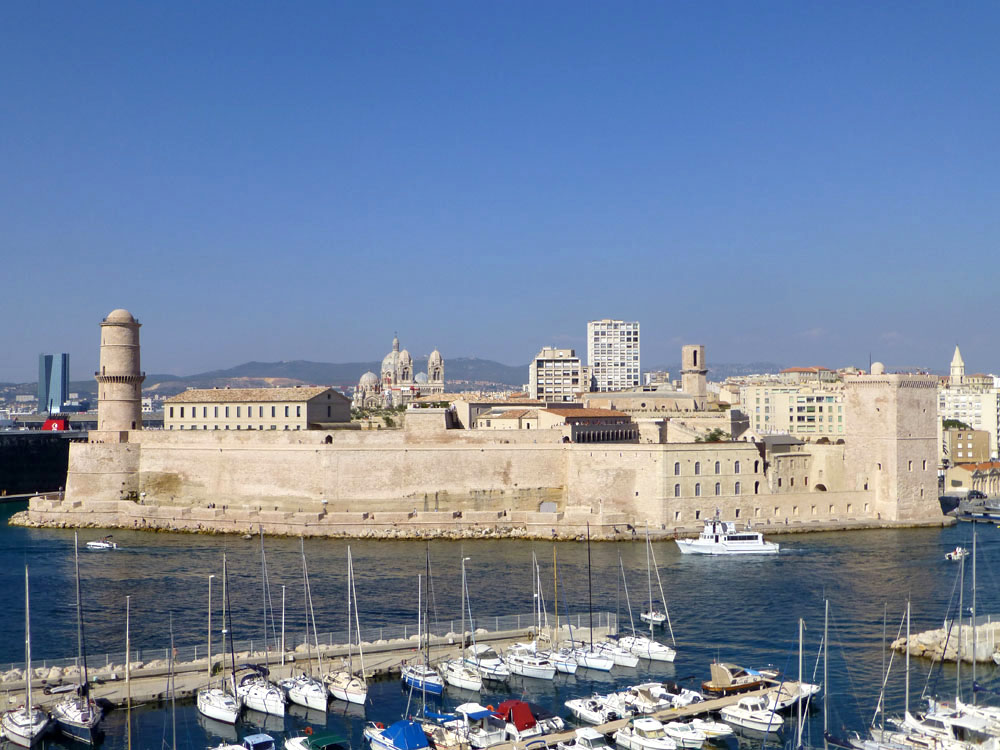 It is so easy and trouble-free to travel to Marseille by train these days.
I took the Eurostar from St Pancras, a direct service that takes about 6 hours.

There is more information about MuCEM on their website: www.mucem.org 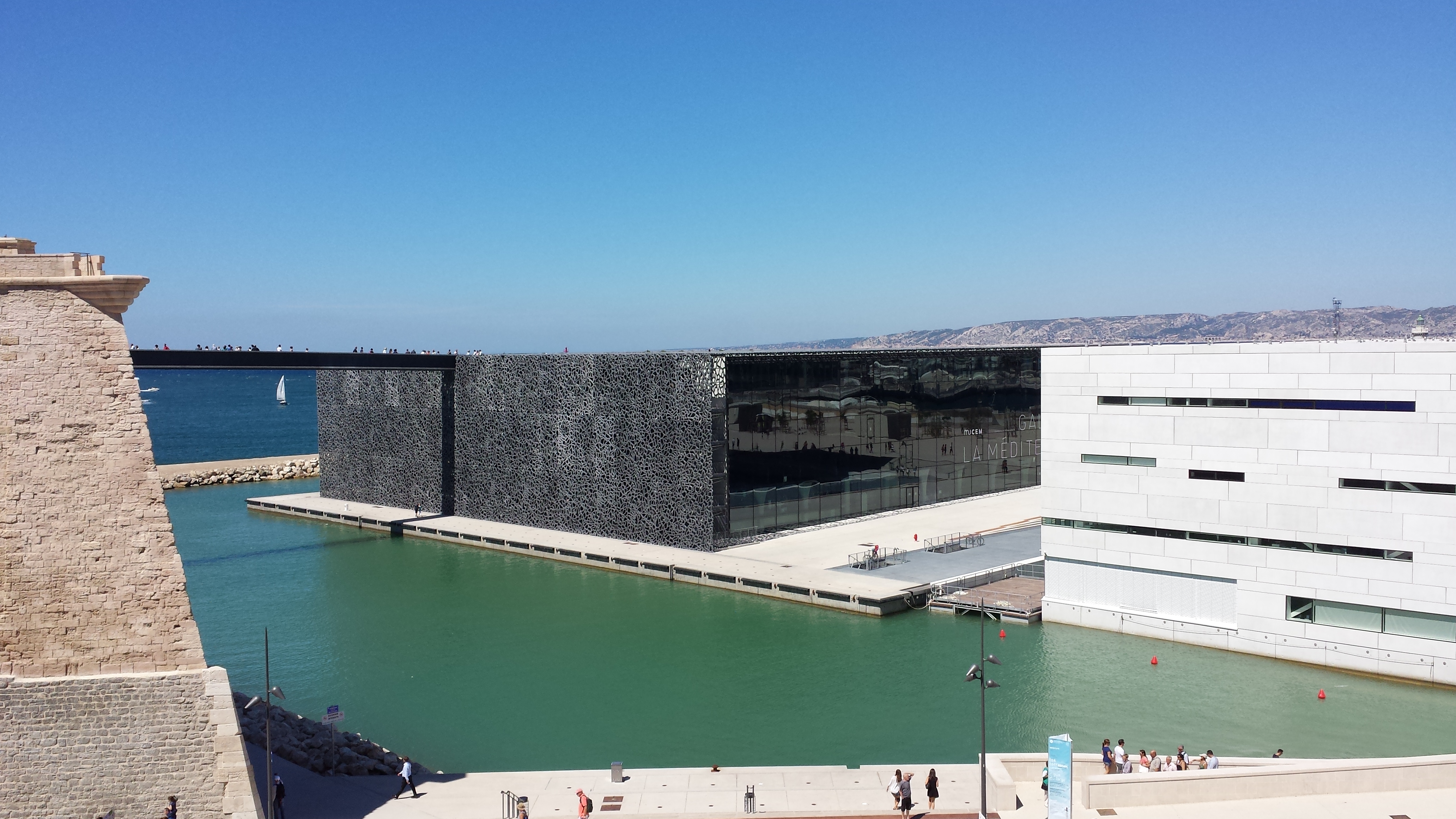