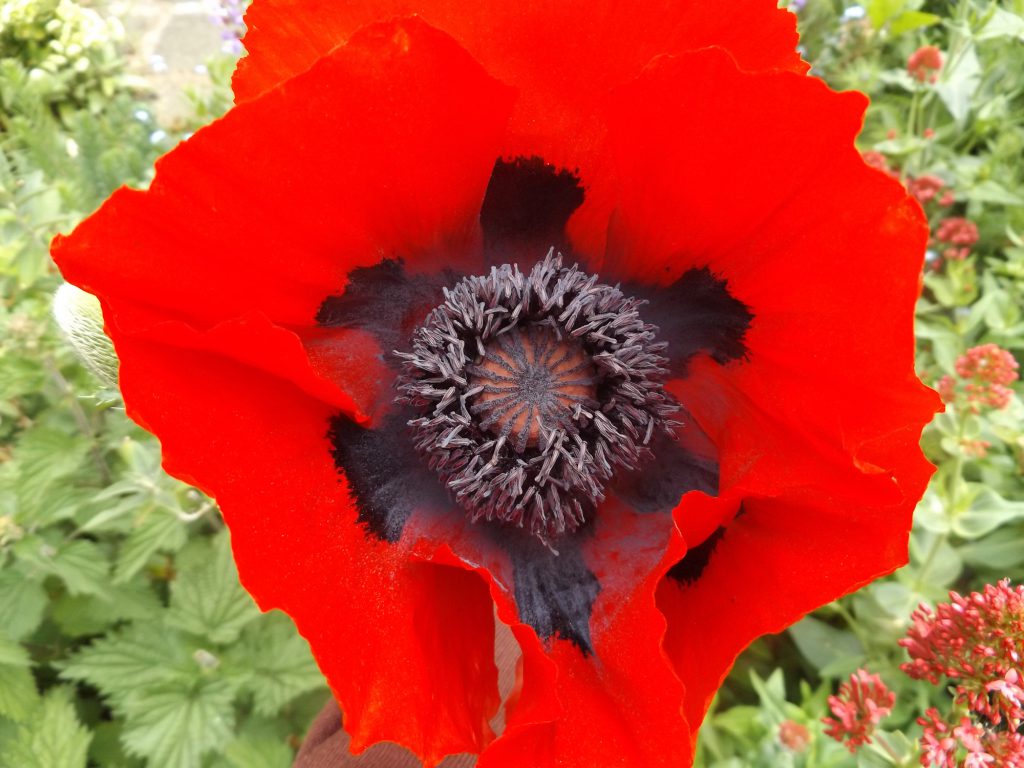 The first of the poppies has unfurled. There’s a cluster of about twelve of them on one plant just waiting to pop open one morning – what a sight that will be! Though I fear the predicted rain might put the mockers on their fragile display. 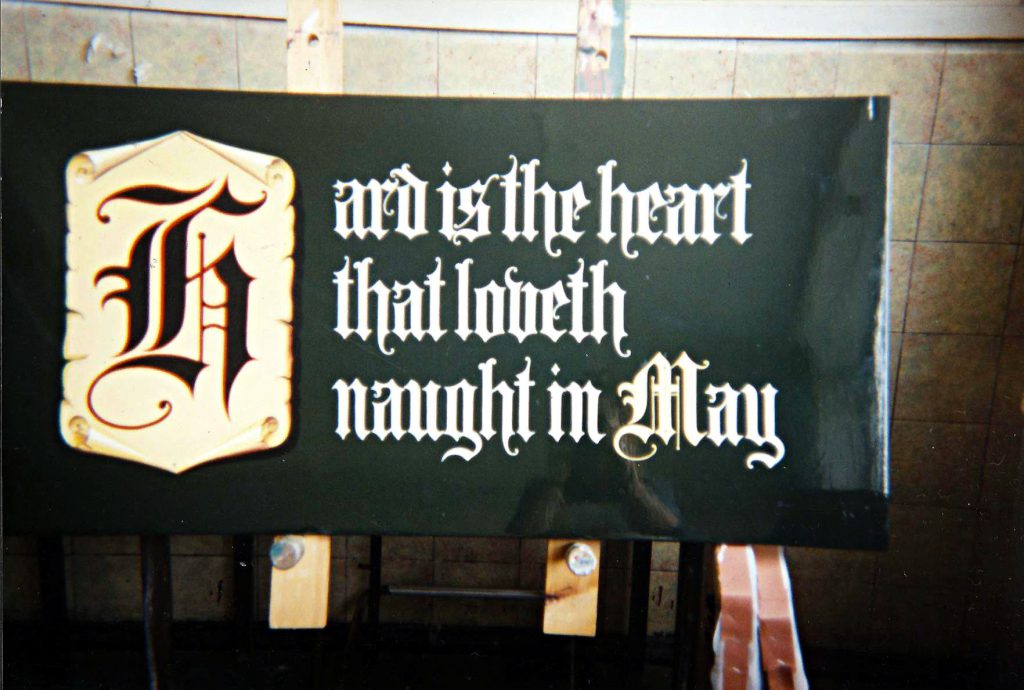 A college piece from my days as a student of signwriting at Olympia. 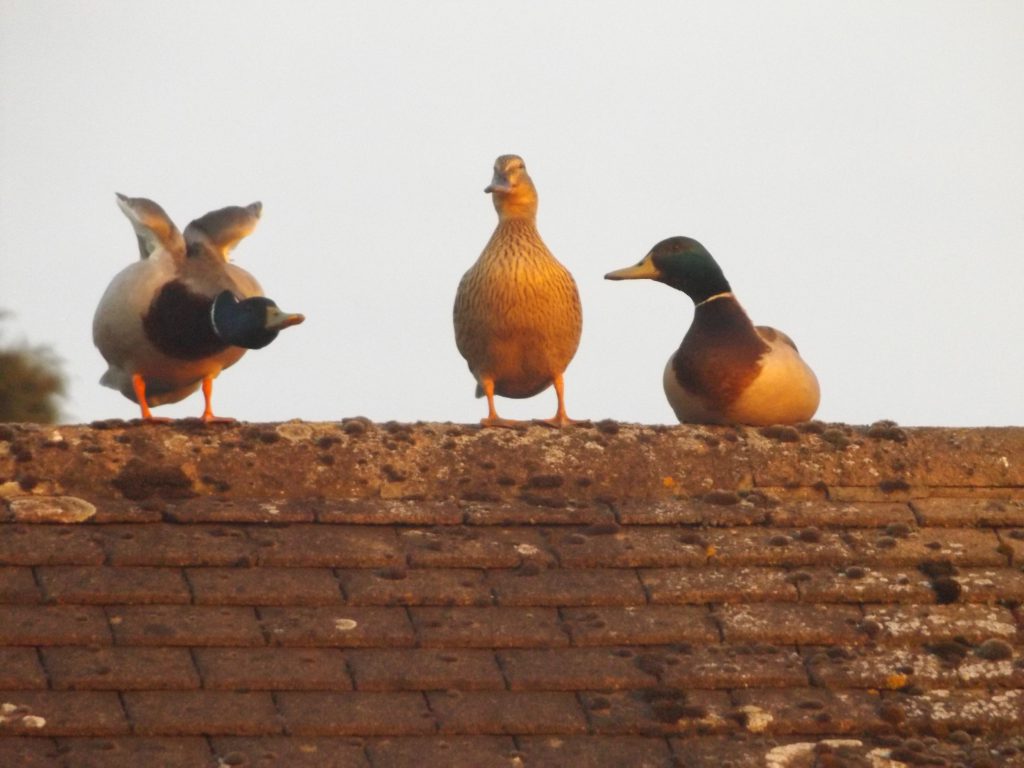 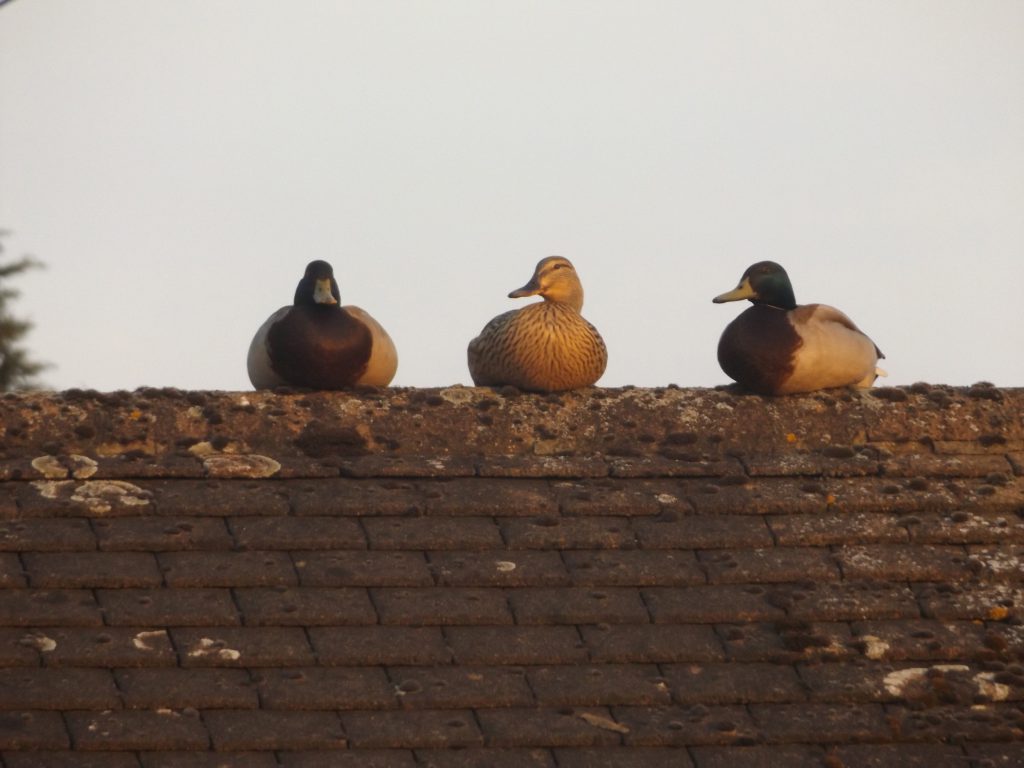 I spotted these three ducks on the roof across the road. I wonder which drake won the wooing game? 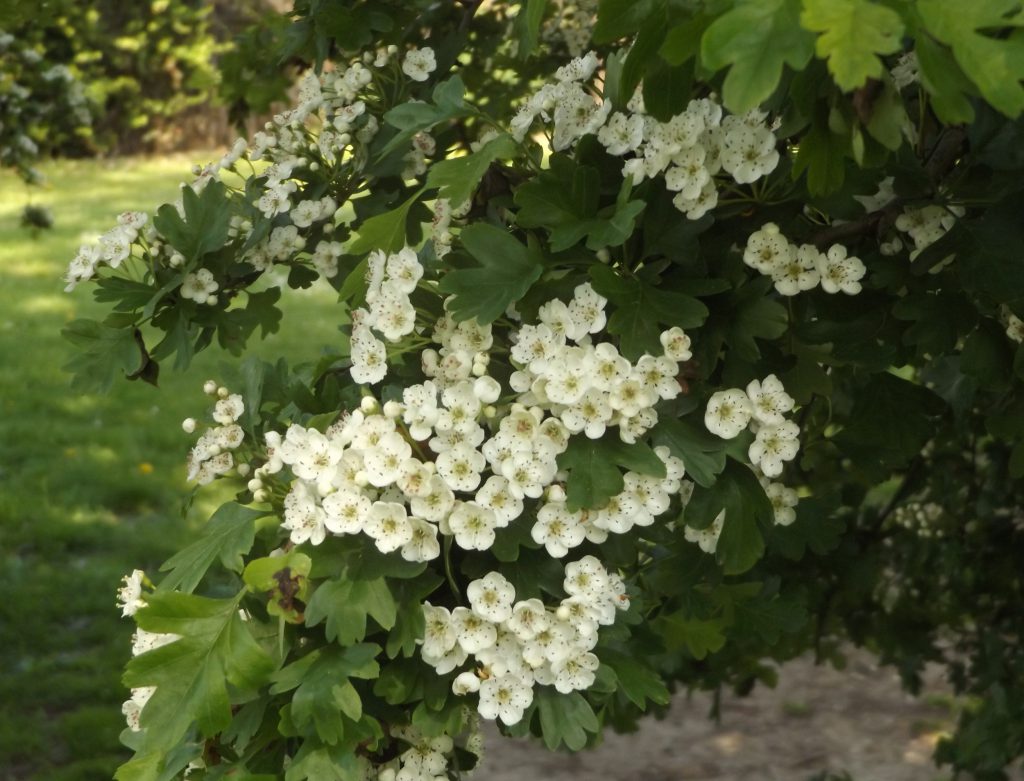 This week the hawthorn and rowan blossoms have burst forth in the garden. Their smells always take me back to Churchfields junior school playing field, in which we were allowed to play during school lunchtimes. 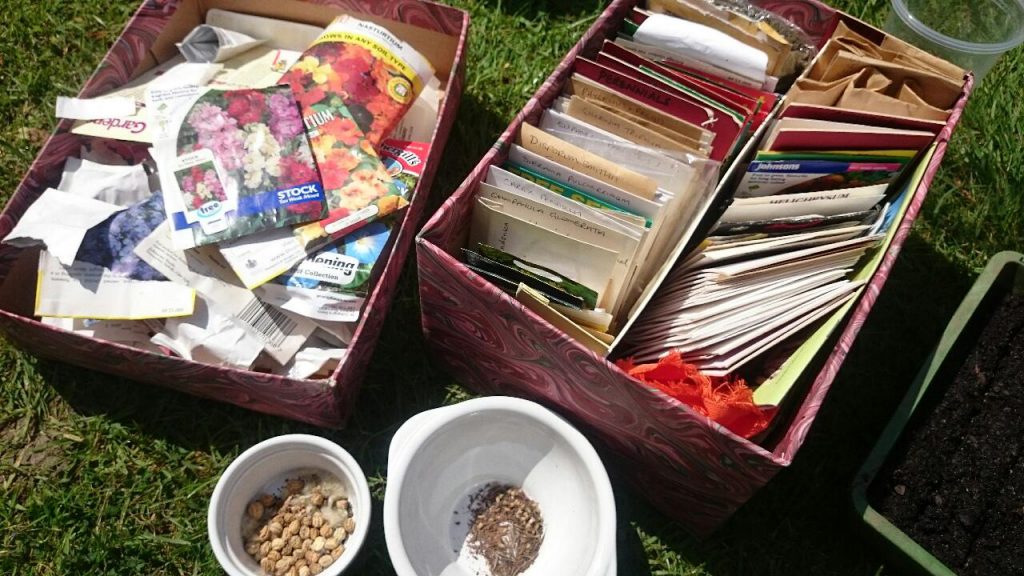 I keep all my plant seeds in a cardboard box. It’s a jamboree box of vegetable seeds, tree and shrub seeds, annuals, perennials, wildflowers, and climbers. Some are unopened, many are half used, more still are just empty packets – reminders of things sown long ago. Most are out of date; I found a packet of delphinium seeds that my mother-in-law bought with an expiry date 1994. Packets of obscure seeds from the RHS seedbank, the names of which do not appear in any of my gardening encyclopedias. I wonder what they are? Little brown envelopes of sweet pea seeds Mum collected from the garden before my time, their descriptions borne on the envelope in her dainty handwriting. Packets of free seeds given away with the Sunday papers or gardening magazines. A potted history of what grew in the garden or what was envisaged for the next summer’s garden. 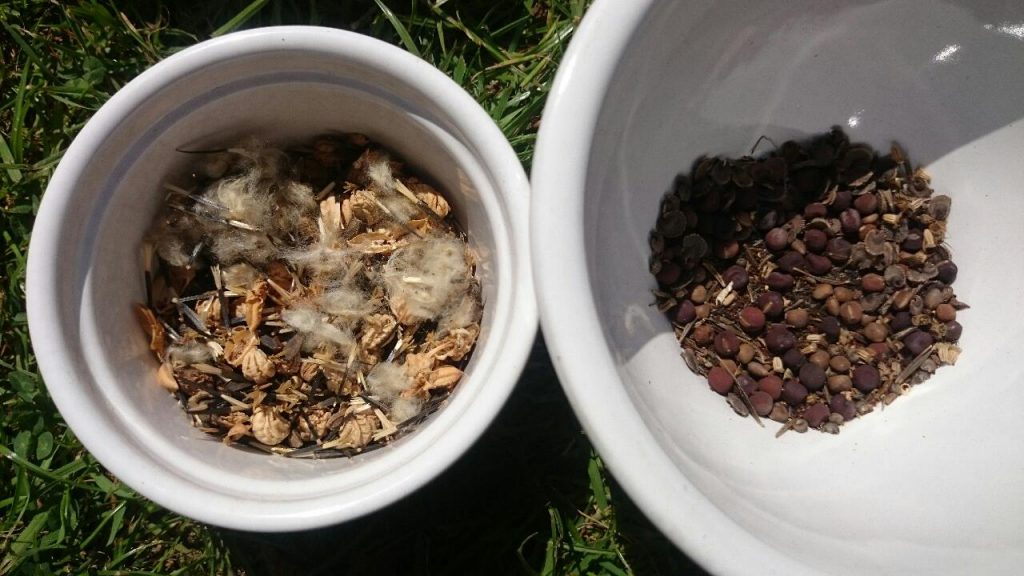 With the realization that I’m never going to sow most of them owing to their age and viability I pondered on what to do with them. I opened the packets and poured the seeds into little bowls labeled tall, medium and short. Hmm… looks not too dissimilar to my breakfast muesli, or a mixture of exotic spices. Then they were scattered about the garden – just a sprinkle here and there, no tilling of soil or prepared beds, just randomly dropped on the earth in much the same way as a flower sheds its seeds. What will grow (if anything) I have no idea but it will be interesting to watch what pops up this year or next. 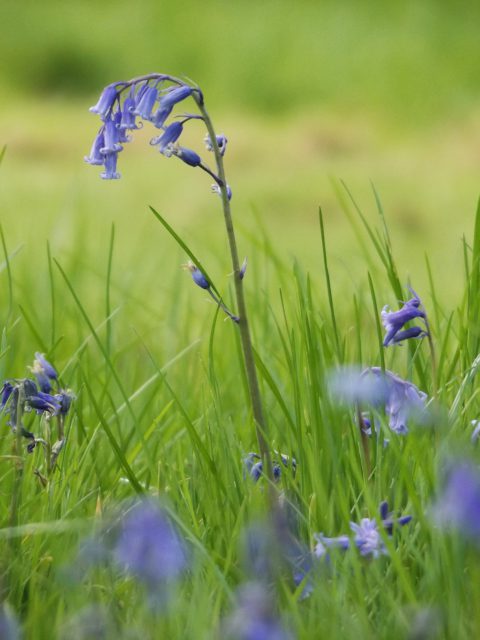 I took a walk in our local park the other day in search of evidence of last autumn’s wildflower planting. I found a patch of English bluebells under the poplar trees. Hopefully they will spread in years to come to form a blue carpet in springtime. 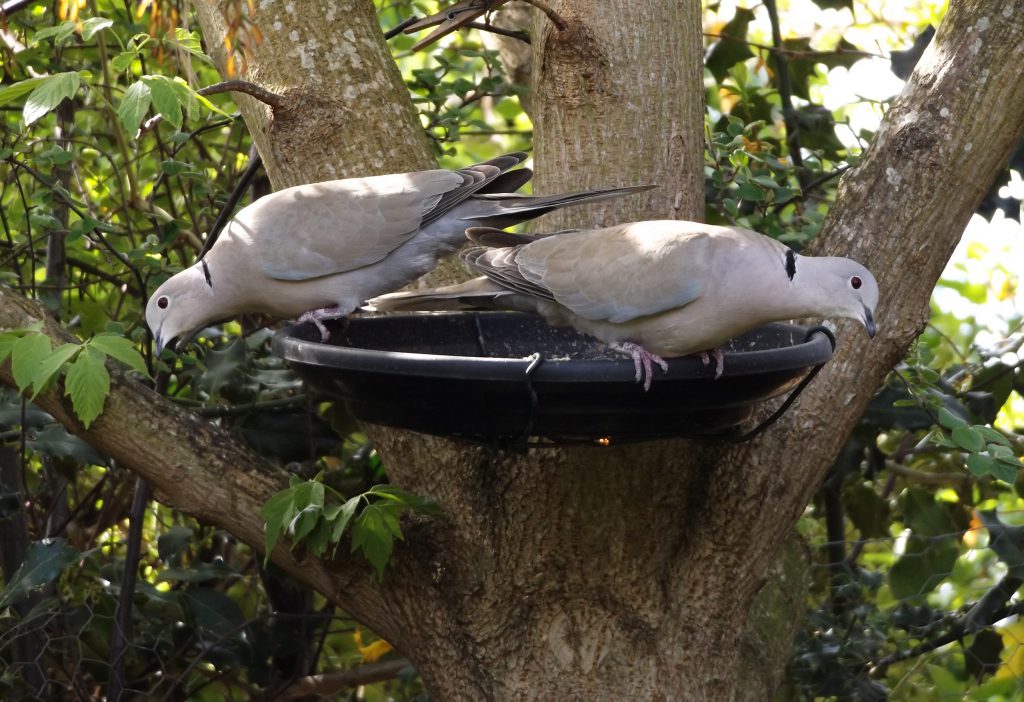 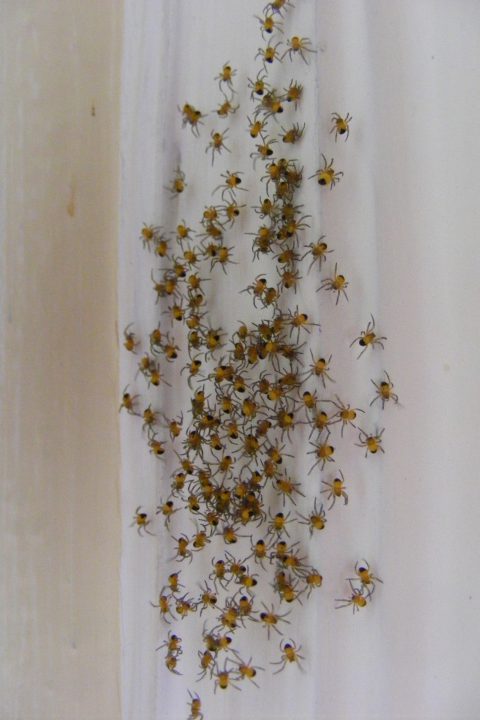 For the last three years diadem (orb) spiders have chosen our front porch in which to lay eggs. They conceal their offspring in little yellow cotton wool-like balls of silk in the autumn, stuck to the inside corner of the doorframe. The mother dies a week or so after she’s put her children to bed.

This week the spiders ‘hatched’ out – hundreds of tiny yellow and black spiders that immediately legged it to the ceiling of the porch. There they wait in numbers to gather strength – they’ll gradually disperse over the next few weeks to the great outdoors. Meanwhile, they have a habit of swiftly abseiling down onto the top of our heads every time we open the porch door. A cunning way to gain passage to pastures new?

Something that puzzles me – each year’s egg sac has been placed within inches of one another. Is it just coincidence, or do spiders have long memories and return to their place of birth to lay their own eggs? 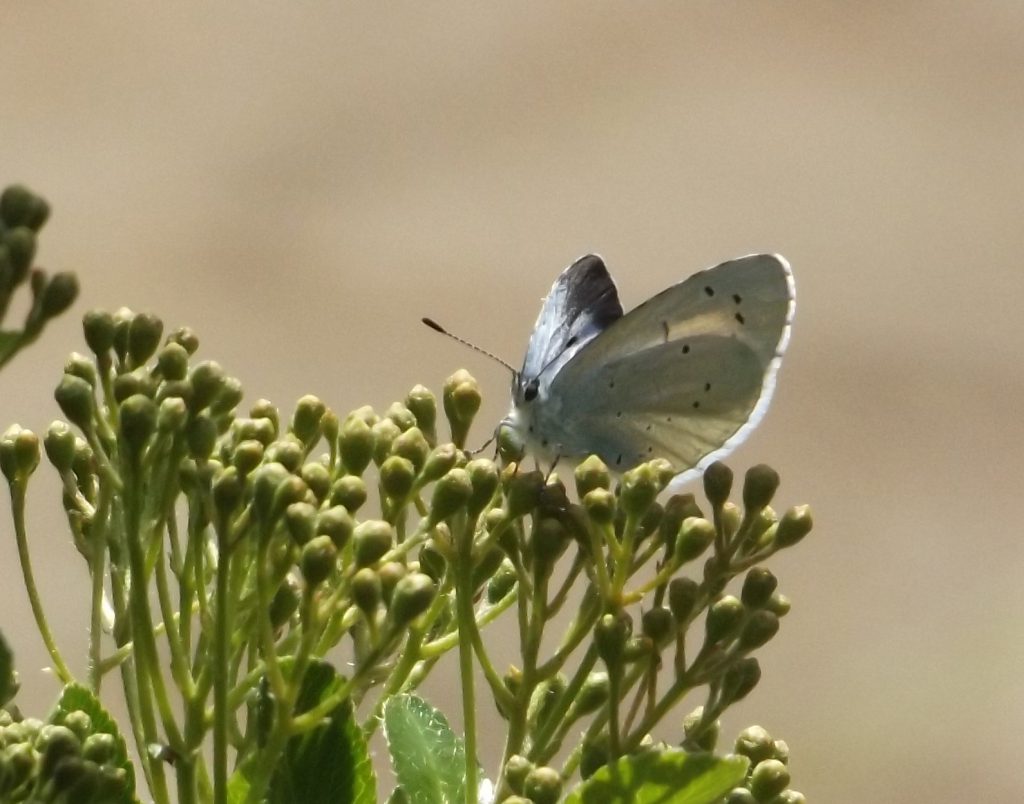 We have a regular sprinkling of holly blue butterflies in the garden. The larva feed off holly and ivy, of which there is plenty. 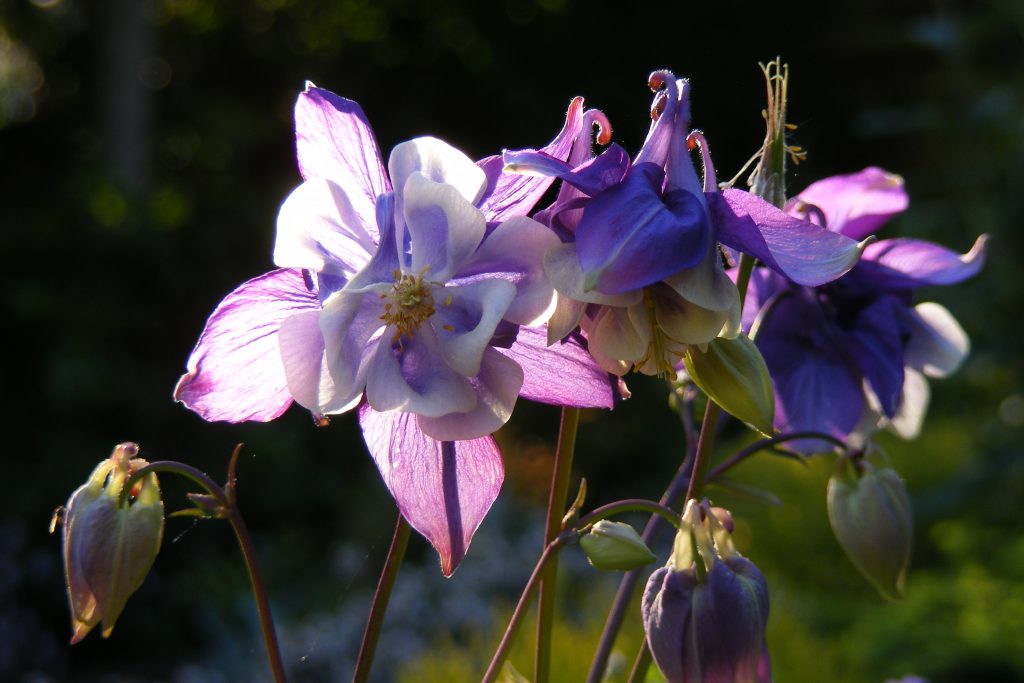 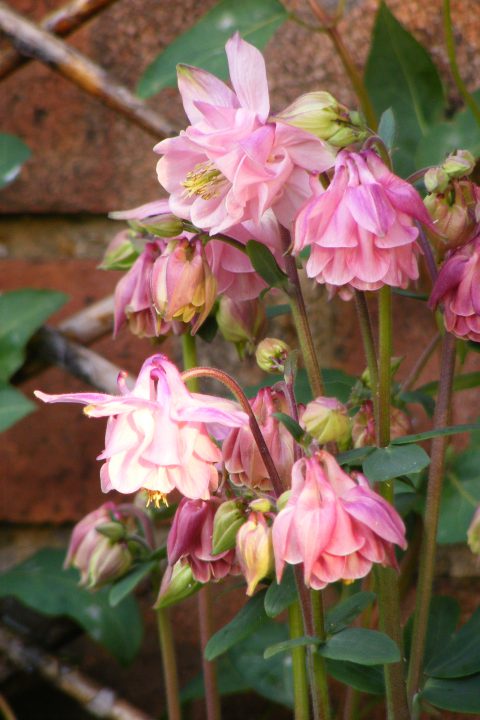 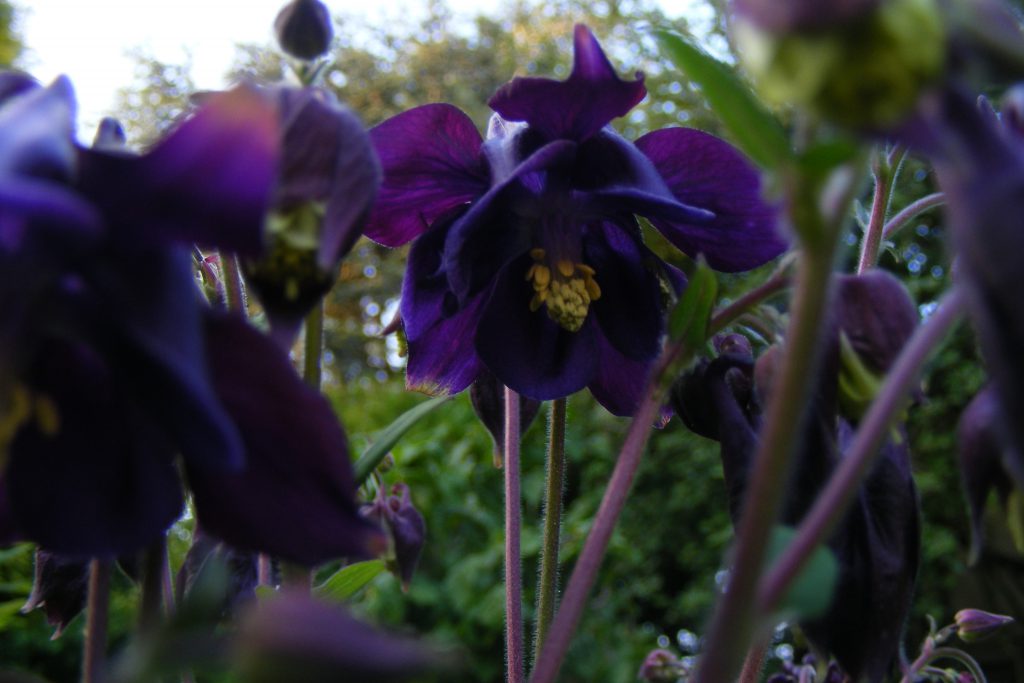 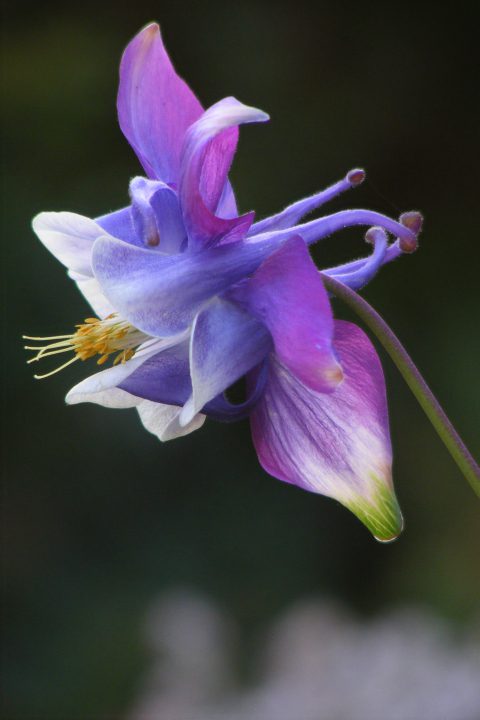 The aquilegias are in flower now, in all their gentle frilliness. They self seed quite readily in all different colours and forms, my favourite being one with the deepest purple of flower buds, shaped like ancient amphoras. Some bees have found a crafty way of extracting the nectar from within; the flower is normally too deep for them to reach it with their tongues, so they pierce a hole in the ‘spurs’ at the back of the flower where they estimate the nectar is located. It is most commonly carried out by white tailed and buff tailed bumblebees and is called nectar robbing. 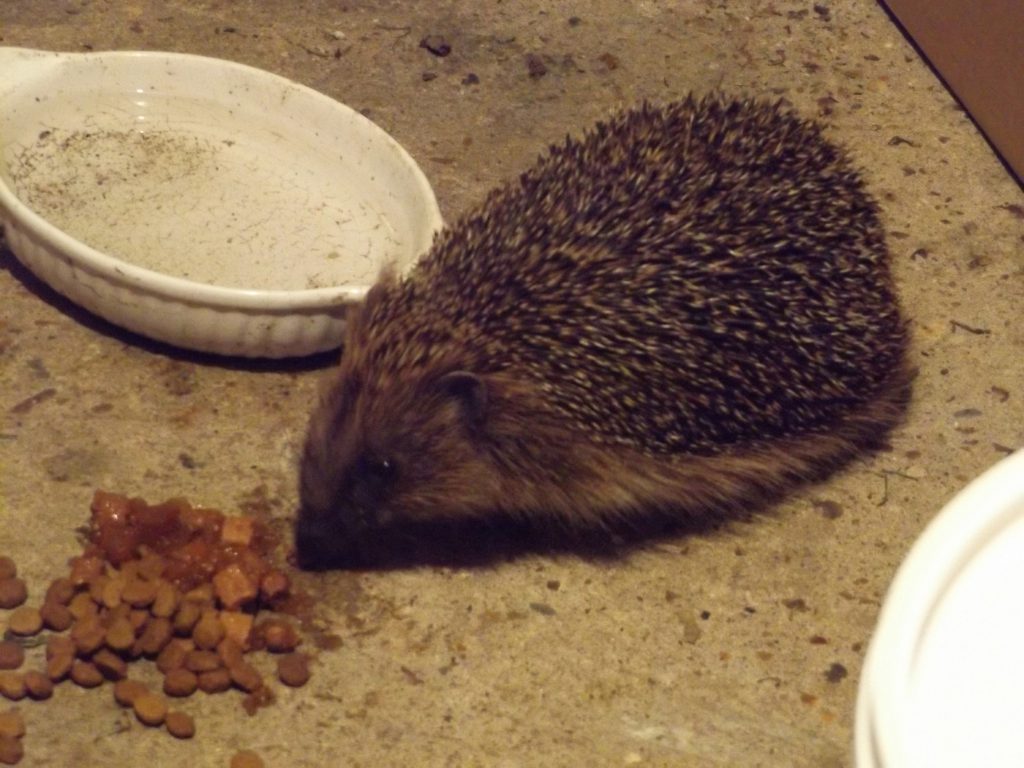 Medge has been holed up in the corner of the garage since winter now, wrapping himself up in plastic bags that he’s found from God knows where. Despite leaving the door open for him he has been reluctant to leave his little corner for a more natural outdoor nest. In an attempt to get Medge out of the garage, I hit upon the idea of providing a nice cozy box for him within the garage – get him used to sleeping in it, then putting the box outside – his smell would draw him back to the box when he found the garage door closed. Ingenious!

Or so I thought. I should have thought this through more. The signs were there – spotting three Medges in the garden earlier for a start (see April blog). Garage Medge is still in his corner tucked up with his Tesco bags. But he has now been joined by Bigger Medge, who has taken up residence in the box. Double trouble!

I am writing about the Medges as being male (saves writing he/she every time and disrupting my flow) but I haven’t the foggiest idea what sex they are. They could be procreating as I write (what a den of debauchery our garden is! – (see March blog/foxes.) It would be lovely to have Medgelets one day, but I fear the garage would end up like a scene from Star Trek “The Trouble with Tribbles”. 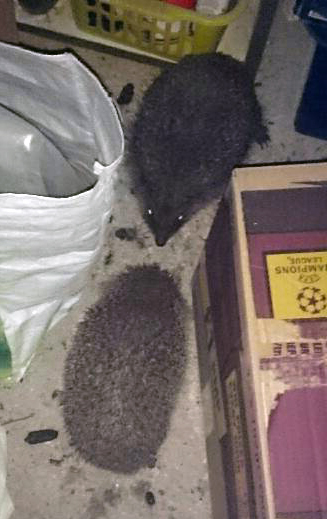 I popped into the garage just after 9pm this evening to retrieve some paint. Even before I opened the door I could hear a curious grunting noise coming from within – sounds like Medge activity. I quietly crept in so as not to disturb him, only to find two medges nose-to-nose, grunting at each other – they’re not called hogs for nothing. Actually they sounded more like my cat when he sneezes. Not sure whether it’s a mating ritual or a tousle over territory. I didn’t stick around to find out but left them to their shenanigans. 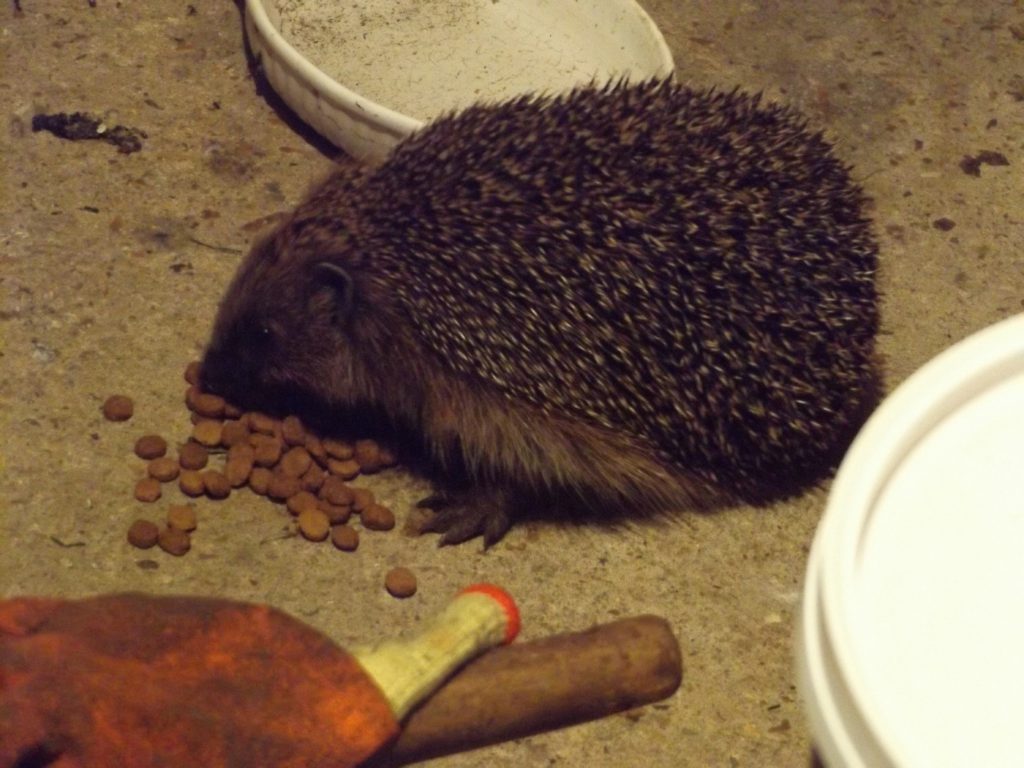 With the warmer weather finally here the medges have finally vacated the garage for pastures new. Not sure where their new homes are. I’d left a plastic bag-full of grass clippings my neighbor had given me for the compost heap behind the garage. The next morning I found the grass strewn all over the ground and the bag ripped to bits – half of it absent. Maybe Medge was missing his plastic bedding and wanted to take some with him.

Since then I’ve seen the two medges together, foraging around the garden for tasty slugs and worms. I still leave a few cat biscuits outside the back door every evening (under an upturned box with a hole in it to prohibit cats). I don’t always see them but I can hear their little teeth crunching biscuits through an open window, and little thank-you gifts are left behind each morning for me to clear up. 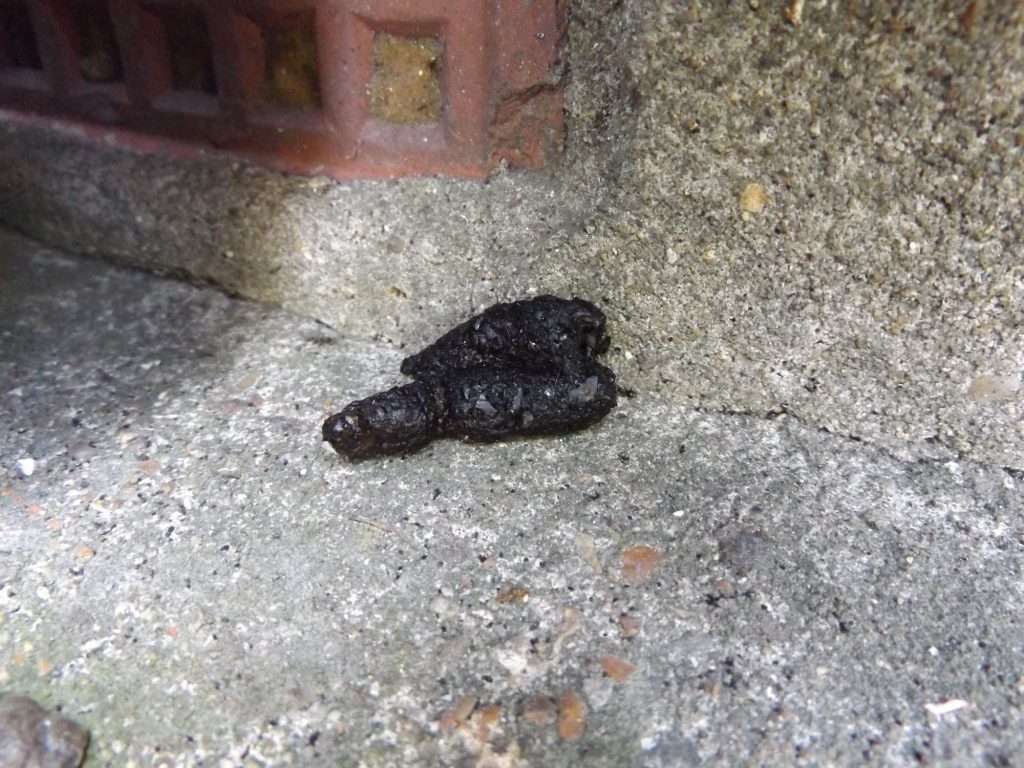 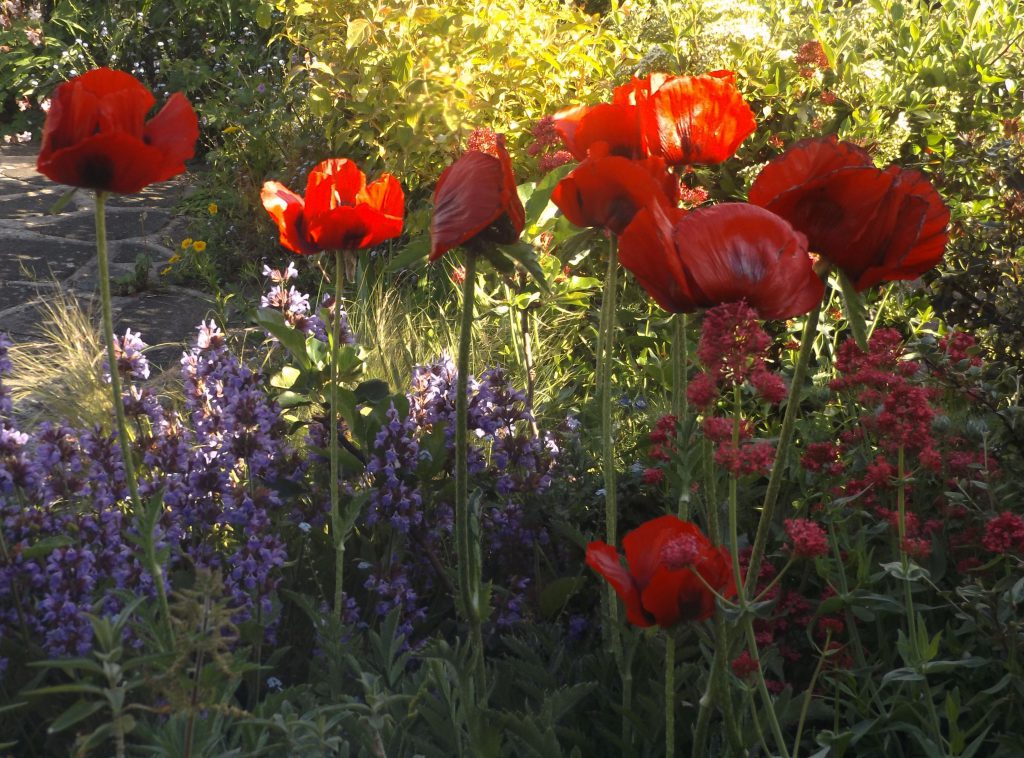 Well, the rain didn’t arrive as predicted and the poppies bloomed in a fiery burst together.

One thought on “A May Garden”