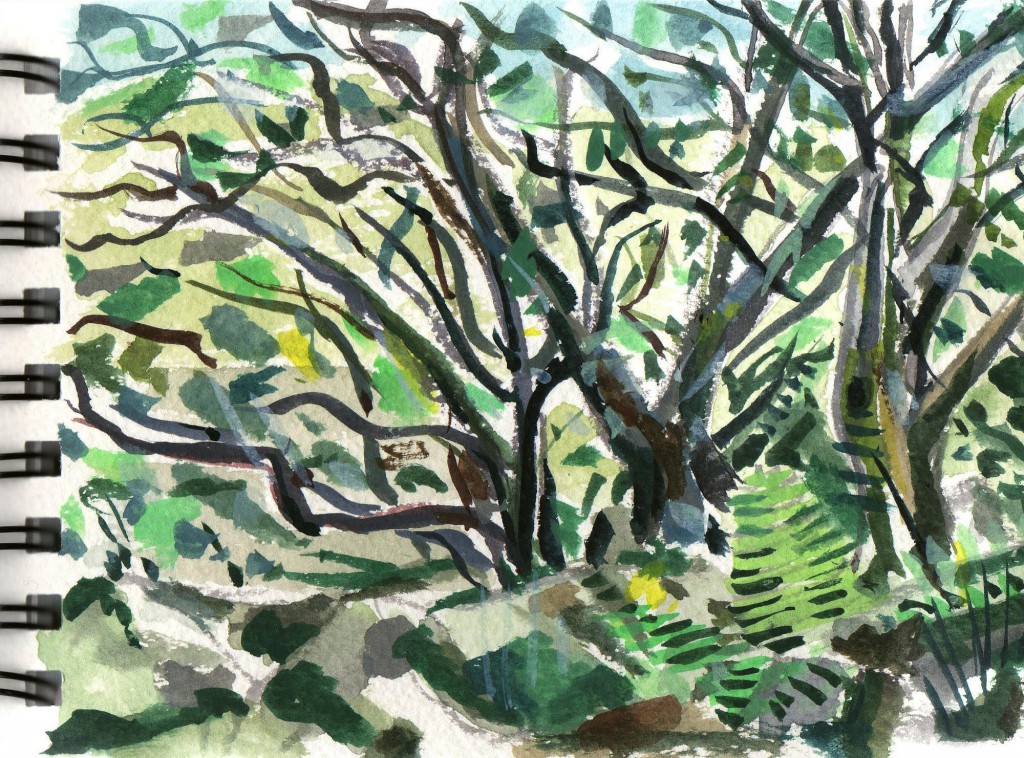 Here is an extract from a prose work in progress about family life in summer on Powdermills Farm in the 1960s and 1970s. My father, then head of art at Bournemouth and Poole College of Art, had hired a cottage there, in the middle of the moor, from the Duchy for £70 a year. No electricity, no running water, a ghost in the second bedroom, and sheep in the paddock at shearing season. It was a wild experience. Wistman’s Wood, primordial remains of the original Dartmoor landscape before its Bronze Age settlement, is a few miles walk from Powdermills, and remains one of the most atmospheric and haunting spots on the whole moor. The paintings were made on a return visit in 2009, and there are two of my father’s sketchbook drawings from the late 1960s. The poem comes from First Music, a sequence about Dartmoor, childhood and memory, in the 2011 collection The Rapture (Salt Books). 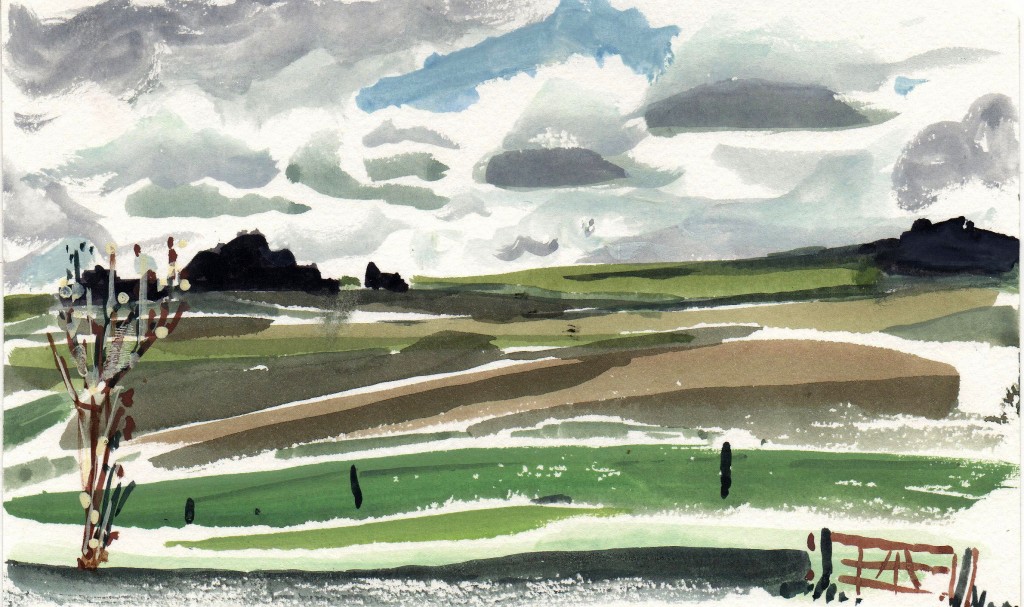 …Powdermills had been chosen in the 1840s as a site suitably remote enough for the making of gunpowder, the ripe charge of saltpetre, sulphur and charcoal. The land was littered with ruined granite outhouses, workers’ cottages, two giant chimneys, and leats, channels and clitter-filled drops that once housed water wheels powered by the Cherry Brook to filter out impurities from the finished product. The finished gunpowder was delivered to local magazines by horse or steam and from there to the quarries and mines that blew their way into the earth for metal and stone. Some of the tin workings in these parts are very ancient indeed. The farmhouse had been the foreman’s house, the farm buildings workers’ cottages. There is a story of one worker, by the name of Silus Sleep, who chose to eat all his day’s meals in the morning – so that in the event of an explosion, he would meet his maker on a full stomach to soften the blow. Two testing mortar were set either side of the track from the road. Three thousands US troops were stationed at Powdermills in the months before D-Day and a group of them took the cannon with them. They were retrieved at Plymouth Hoe and returned to the moor, and to Powdermills. 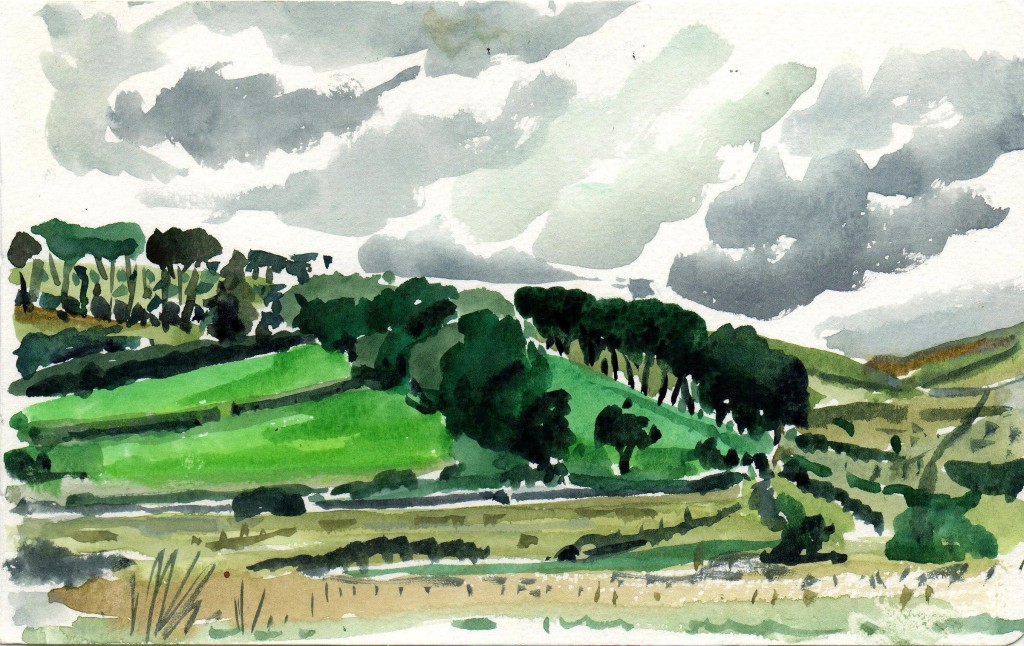 Storms lash Dartmoor even in the height of summer, and there were floods, collapses and other camping calamities until dad gave up bivouacking for one of the farm cottages, The Blue Cottage, hired from the Duchy for seventy pounds a year, and one of a row of two between milking parlour and barn that looked directly over towards Bellever Forest. The forest was thick but young – post war pine and Forestry Commission pathways. It rose up dark and solid towards the summit of Bellever, like a troubling dream, the approach to the peak ringed by wild blueberry bushes yielding handfuls of tiny bittersweet fruit to assiduous foragers and thirsty mouths. I remember following a stream through the forest, as if it were the compelling plotline of a fairy story, a force forever holding the light of the sky below the crowns of the tall dark handsome pines. 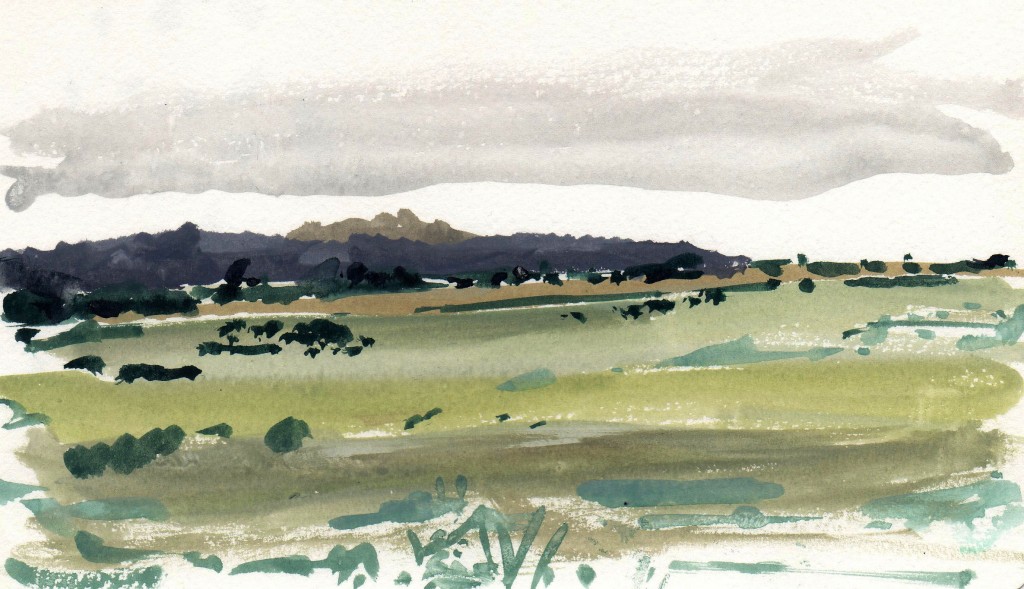 The Blue Cottage had a tiny front garden, and a rock strewn paddock ran the full length of farm buildings behind us. In shearing and lambing season, the farmer George Stevens would round up flocks from the moor – whistling and calling his dogs up the slow slopes of Longaford and Higher White. Sleeping through the sound of several hundred sheep in the paddock at night, as if the sound itself took on the properties of wool and pillowy warmth, a quiet Celtic kid like me would feel the whole of the universe expressing its sheepness. 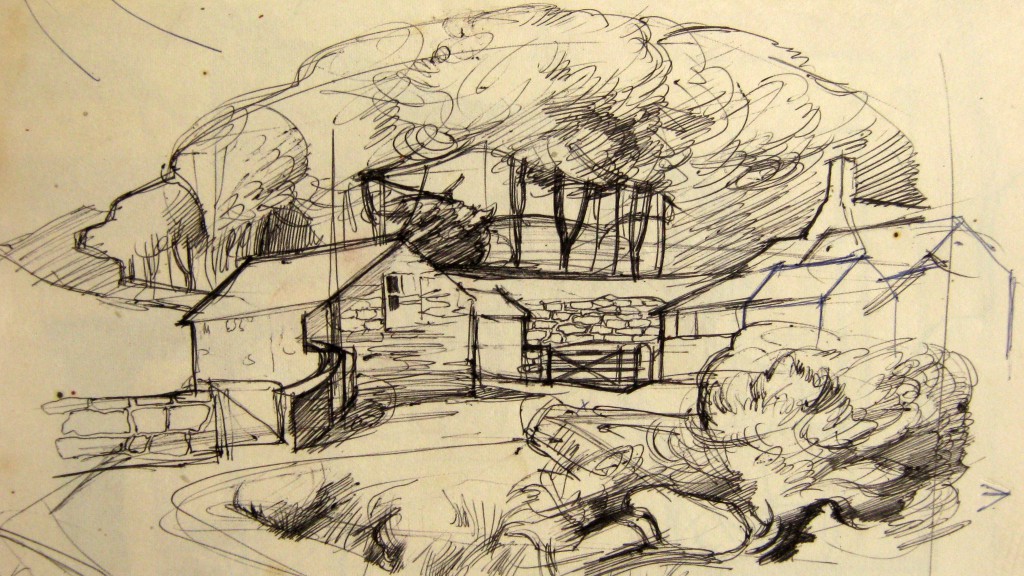 The cottage at Powdermills had no electricity or running water. We drew water from a well using a long iron hand pump, and lit the rooms with oil lamps and candles and the light of a Rayburn. In later years, the landowner Mr Russell had a generator installed, but our cottage was not connected to the 20th century in any direct manner, and I relished the time travel. It was haunted too. The voice in the ear in our parent’s bedroom. The spirit that troubled my brother in bed by the stair wall. All drowned out by the generator sat shaking and growling in the old barn where dad and Mr Stevens had once tended a dying bull ‘whose blood had turned to water’, like the Mass in reverse, and a bull, too, that creature of the cave wall. 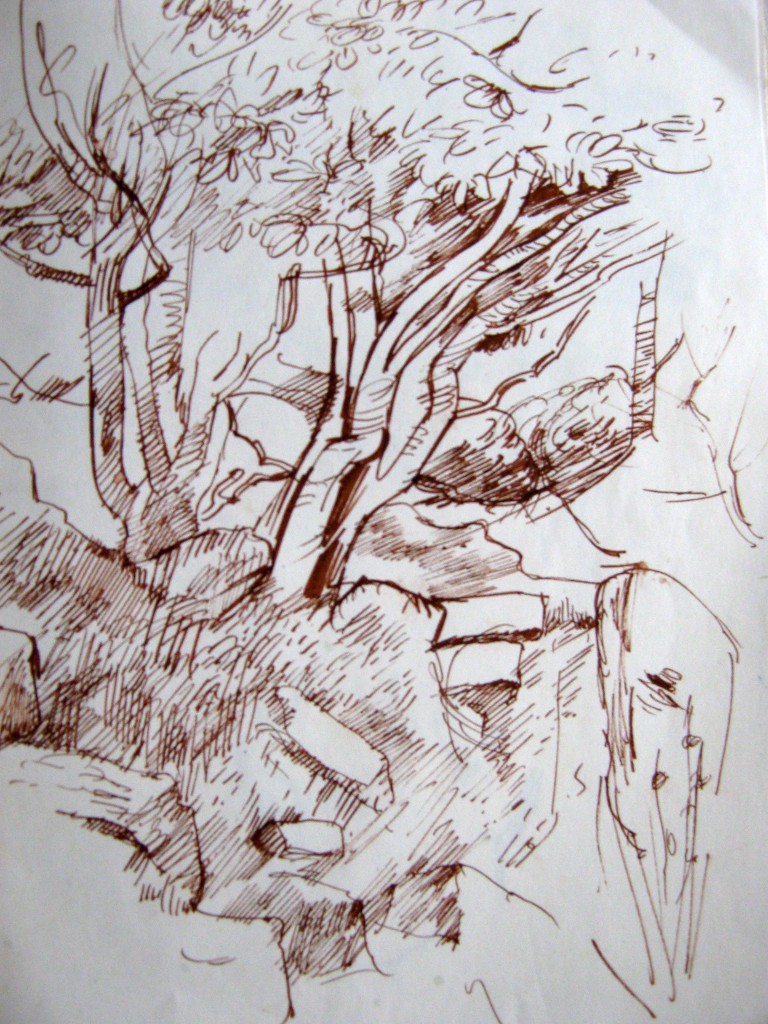 Mr Steven’s farmhouse was a large, square grey shale-covered building of weather-worn Georgian proportions at the end of the row, and through the gate by the farmhouse the path took you to the Cherry Brook, and the old gunpowder works, the gorsey slopes that led to Longaford, and over the other side, a line of Bronze Age stones leaning towards the westerly sun and the great north moors, the green desert of Britain. The silver flashing Devonport leat wound through the bottom of a valley running east through Wistman’s Wood, an acreage of primeval forestry, its gnarled and stunted oaks strewn with boulders, nests of adders and cushions of moss. These trees, these few little acres of land, were the last remnants of Dartmoor’s original forest, the lay of the land before Bronze Age settlers built and razed and passed. Wistman’s was full of legends, boggy with them – the name from the Celtic for wise man, the Wood of the Wise, and from Wisht, for pixie-led, for haunted, eerie, uncanny. It’s not a place that many care to enter. The Wisht hounds are reputed to thunder through on their wild hunt for the souls of the sinner and the unbaptised. Dartmoor tales wrapped round each other and the landscape like those gnarled, twisted, stunted oaks and made objective truth impenetrable. Dad made studies of the wood, using an impasto of his own making, monochrome miniatures that captured the eerie density of the contorted, wizened oaks that grew as if one creature, wrapped up in itself and admitting few strangers… 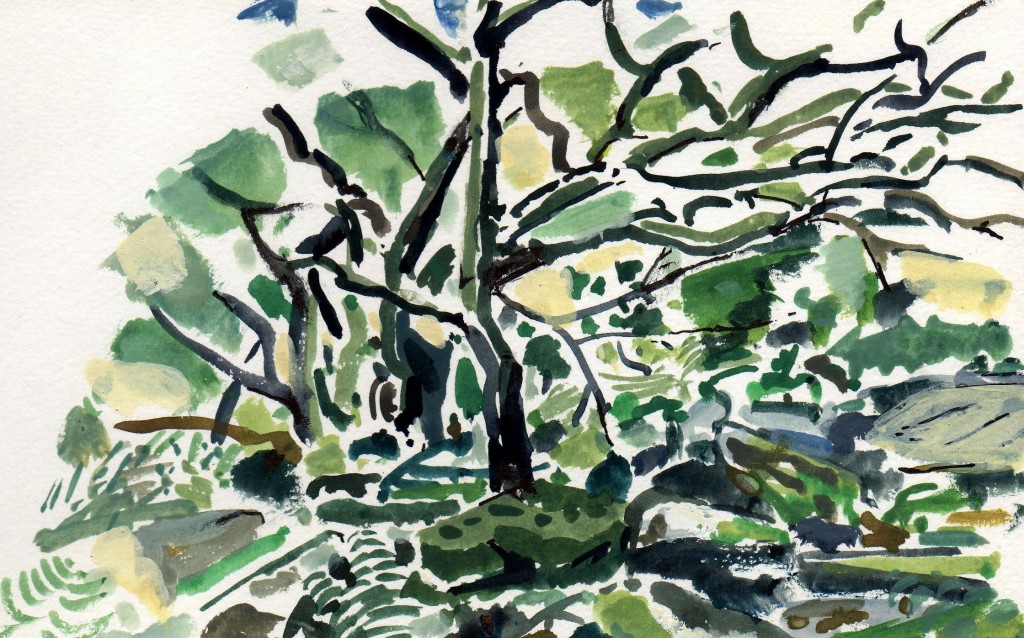 Wistman’s from Wis, or wise,
the wood of wisemen, boulders
and gnarled oak trees rooted beneath
husbandry, softened in moss,
one last pocket of primeval forest
riddled with adders and bilberry
a couple of miles from the road.
We walked there, the three of us,
my little girl and me and John the elder
brother with his genealogical history
of helpful nurses at Dorchester General,
who stops for his breath, for time
to slip back through time to the spot
that’s burned through his mind
like holes in a carpet. Dad drew his time
here, charcoal traces on his hands
and mine, sheet upon sheet of fine art paper,
impasto for the wood’s weird interior.
I’m looking at him coming through the clitter.
Memory twists its branches around,
hurls down boulders, scatters its snakes.
Should I mention the ghost hounds?
A few fellow walkers linger at the edge
but fewer ever ventured further in.

3 thoughts on “From Powdermills To Wistman’s Wood”