An exhibition of 19 paintings by Christopher Corr at Salts Mill, a former Yorkshire woollen mill in Saltaire. They tell the story of the Campaign for Wool, illustrating significant events from its history. 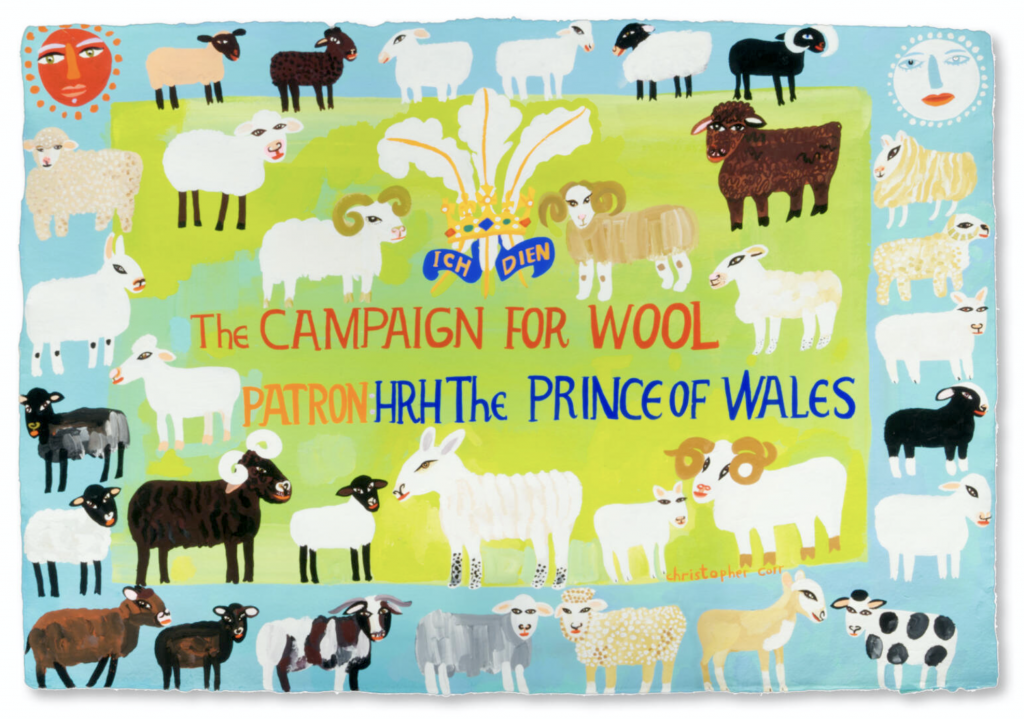 Images from the first ten years of the Campaign by the artist Christopher Corr. The Campaign was conceived by His Royal Highness (HRH) The Prince of Wales to promote the unique ecological properties of wool, and to safeguard the livelihoods of sheep farmers in Britain and across the Commonwealth. The Campaign has staged more than 200 initiatives and events in support of wool. 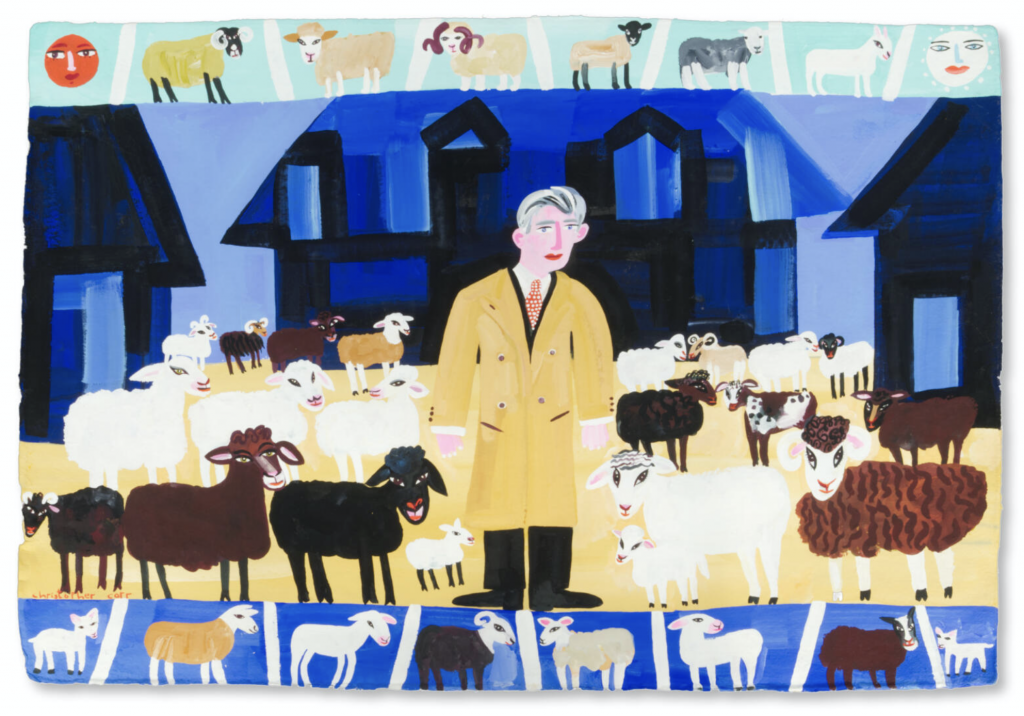 The Campaign is Launched

HRH The Prince of Wales launching the Campaign for Wool in a medieval tithe barn in Cambridgeshire, January 2010. 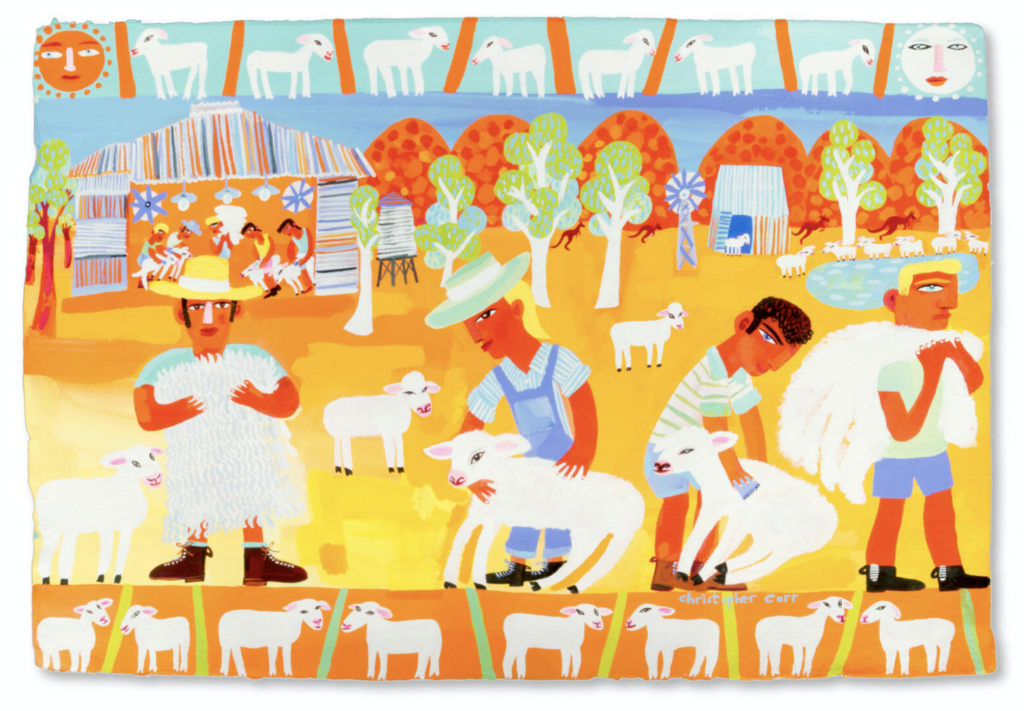 A shearing shed at a superfine wool sheep station in Tasmania during HRH The Prince of Wales’s visit to Australia in 2012. 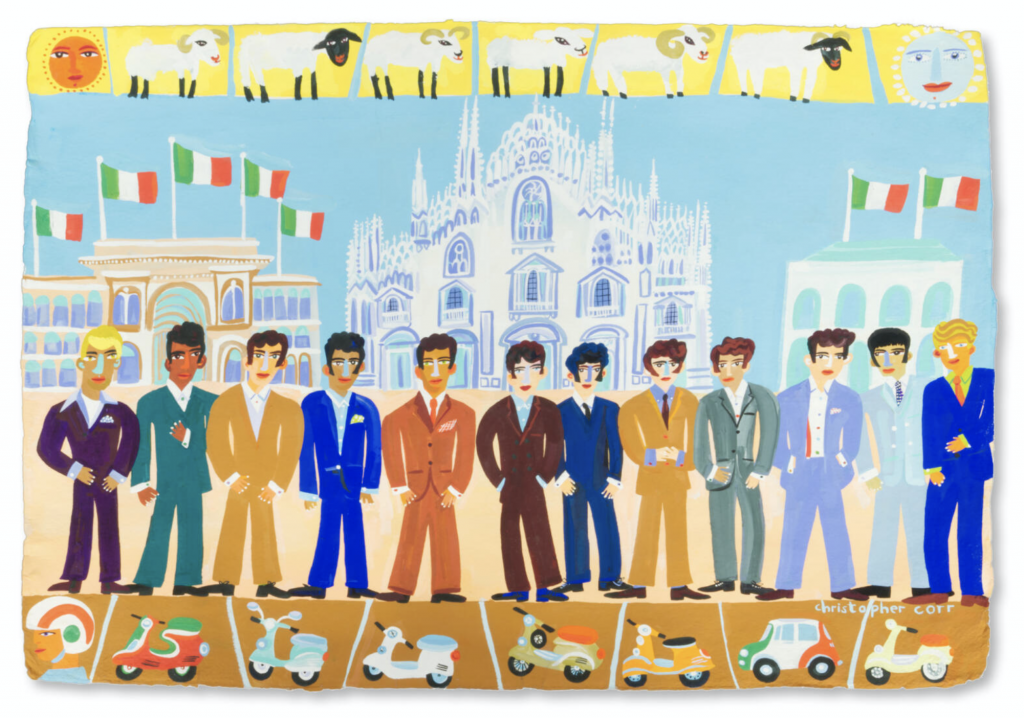 The Campaign for Wool celebrates Milan Fashion Week with a wool-focused event in the Galleria Vittorio Emanuele II, in collaboration with Milano Unica and the Italian Fashion Council. The Italian fashion industry is a significant consumer of wool. 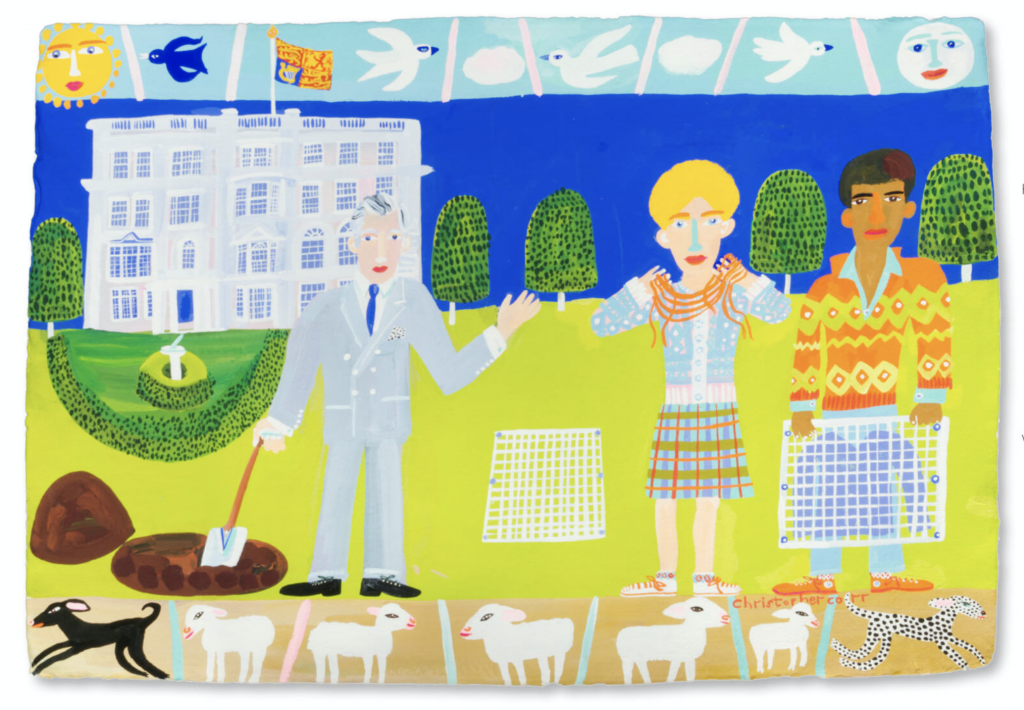 HRH The Prince of Wales burying a wool and a synthetic jumper in the garden of Clarence House, to illustrate that wool is more naturally biodegradable. The garments were disinterred four months later. The wool garment had virtually biodegraded back into the earth, while the oil-based acrylic garment was unchanged, creating permanent challenges for landfill. 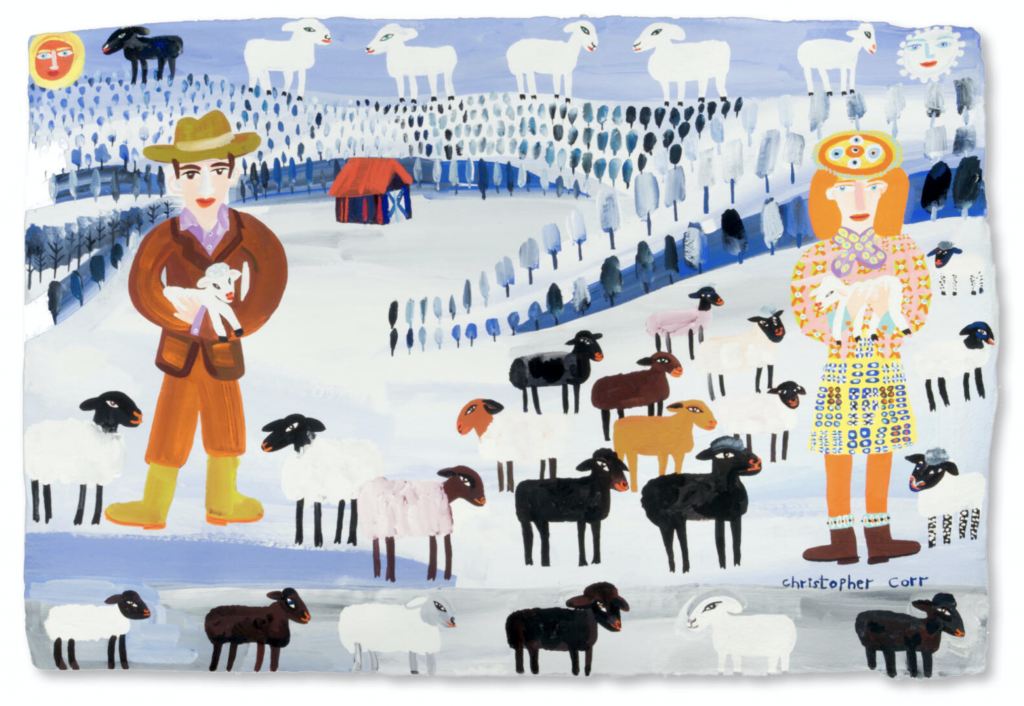 An illustration depicting wool growers in Wales and their local mountain sheep. HRH The Prince of Wales visited the National Wool Museum in Llandysul, Carmarthenshire in 2011. 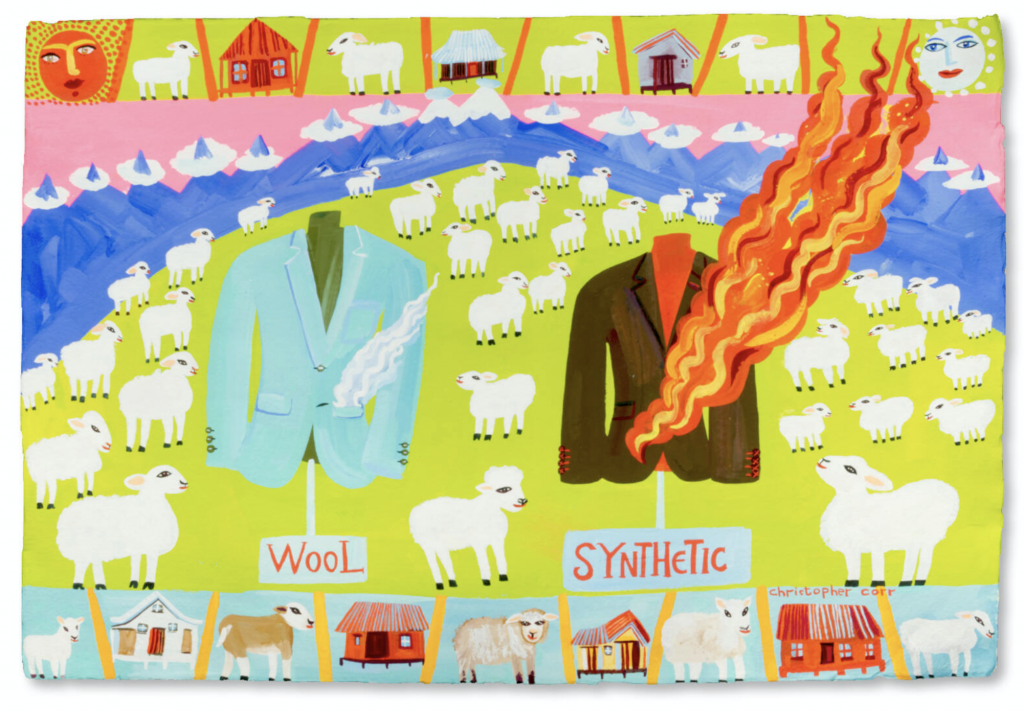 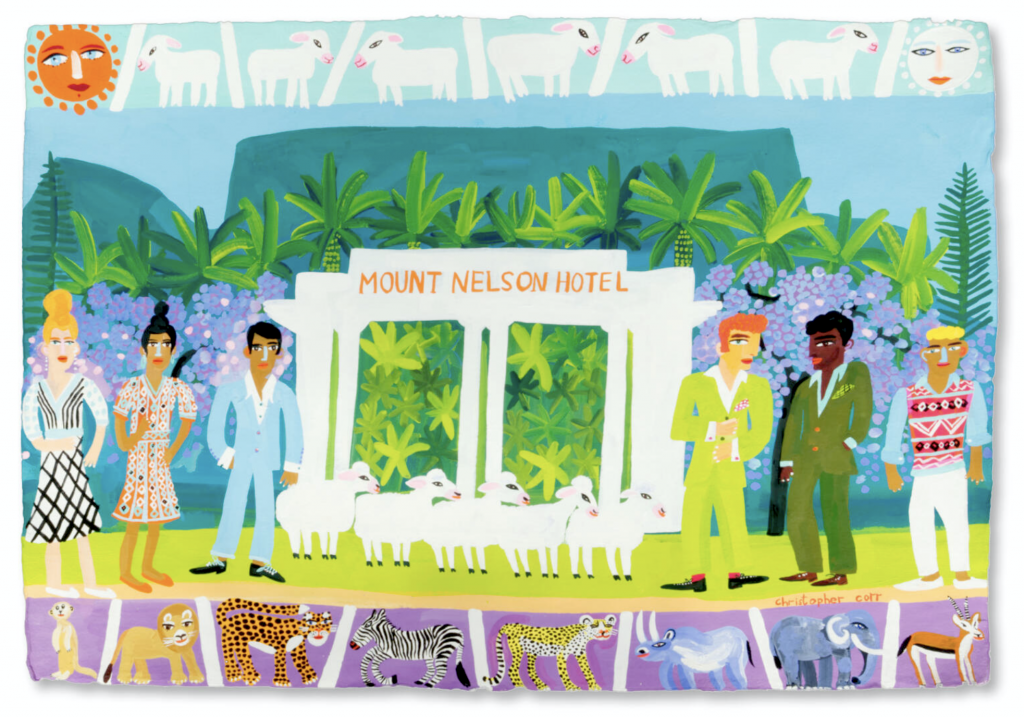 The Campaign for Wool holds an event at the Mount Nelson Hotel in Cape Town, introducing HRH The Prince of Wales to South Africa wool growers, which resulted in Cape Wools becoming a full partner in the Campaign. 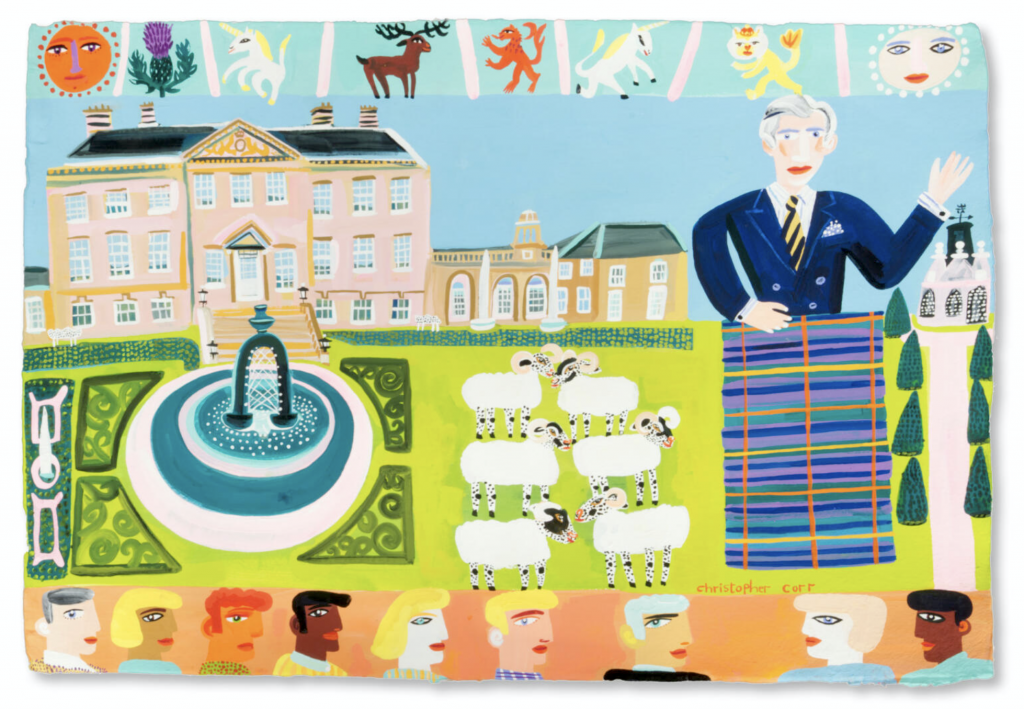 HRH The Prince of Wales announcing the launch of the Dumfries House Declaration, a set of welfare standards for wool growers, during the Dumfries House Wool Conference in 2016, an event sponsored by M&S and attended by over 250 delegates from the international wool industry. 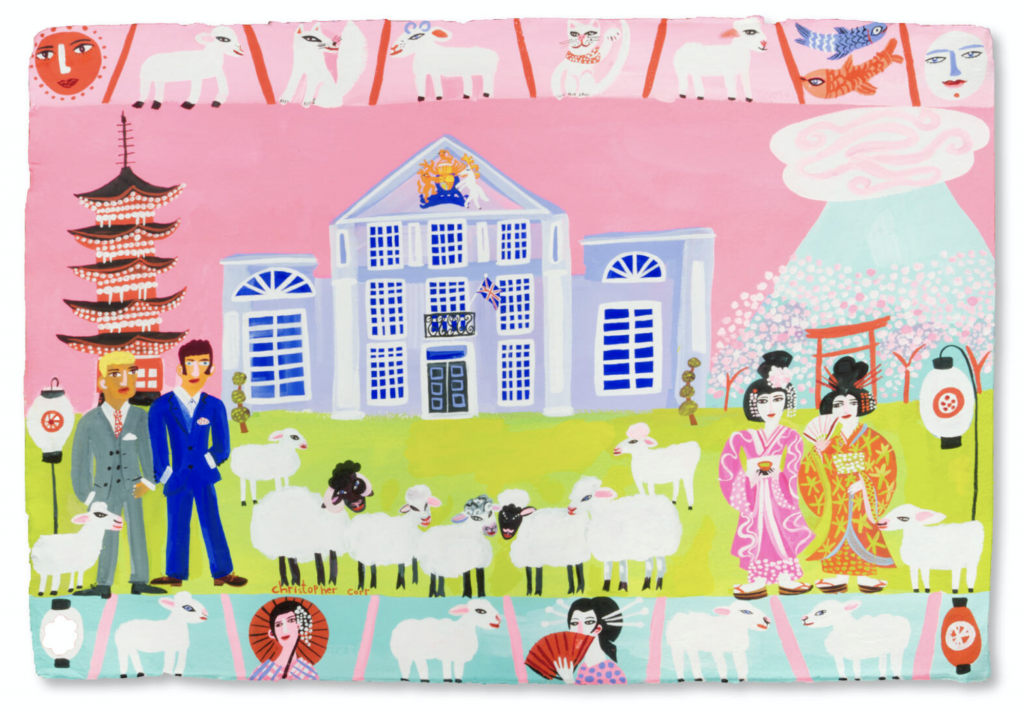 In collaboration with Hackett, DAKS, Paul Smith and Savile Row Bespoke, a flock of sheep grazed on the lawn of British Ambassador Sir David Warren’s residence in Tokyo, in a promotion of international wool. 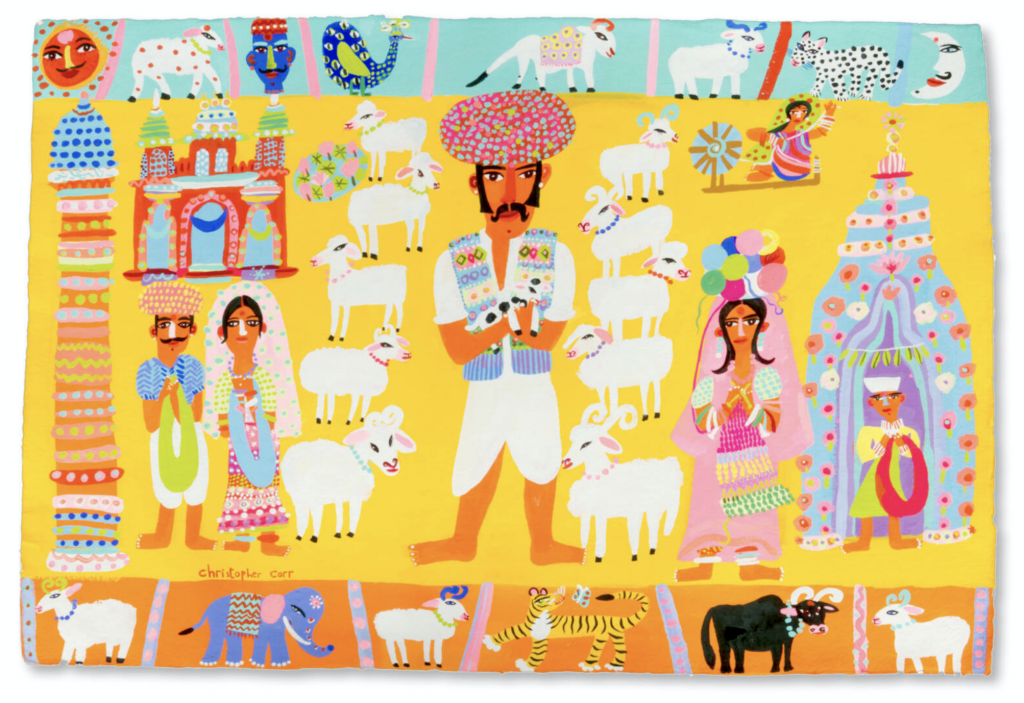 India is an important wool market. The Campaign for Wool’s event during Laksmi Mumbai Fashion Week showcased the ‘Slowing Down Fast Fashion’ film fronted by Alex James of Blur. 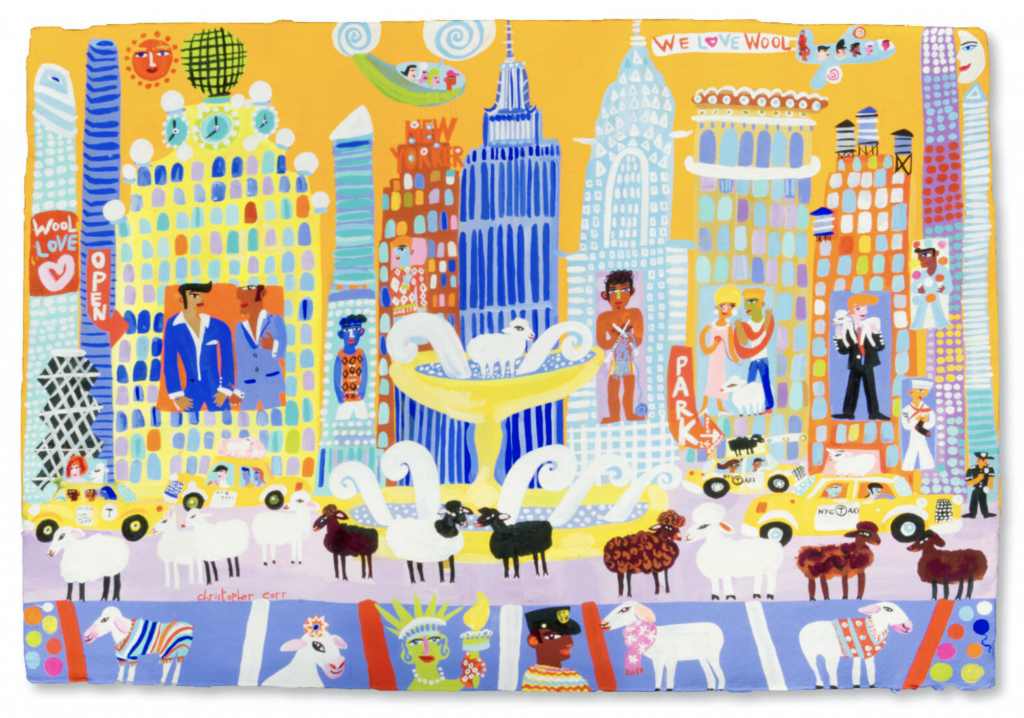 Organised by the British Wool Marketing Board, sheep were penned in a grassed over area of Bryant Park in the centre of Manhattan, to promote the sustainable interior textile industry in the USA. Foreign Secretary William Hague attended the event. 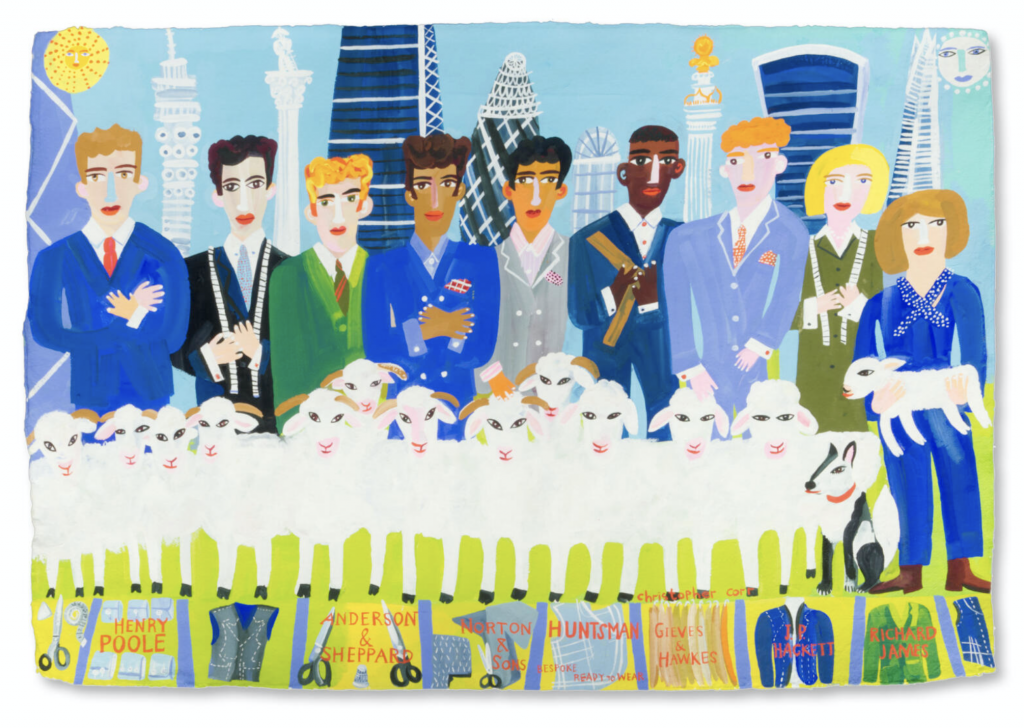 Sheep on the Row

‘Sheep on the Row’ promoted the importance of wool to the British tailoring industry. Savile Row, home to many of the best tailors, was grassed over during Wool Week 2015. The event showcased Lesley Prior’s British Merino sheep from Tiverton, Devon. 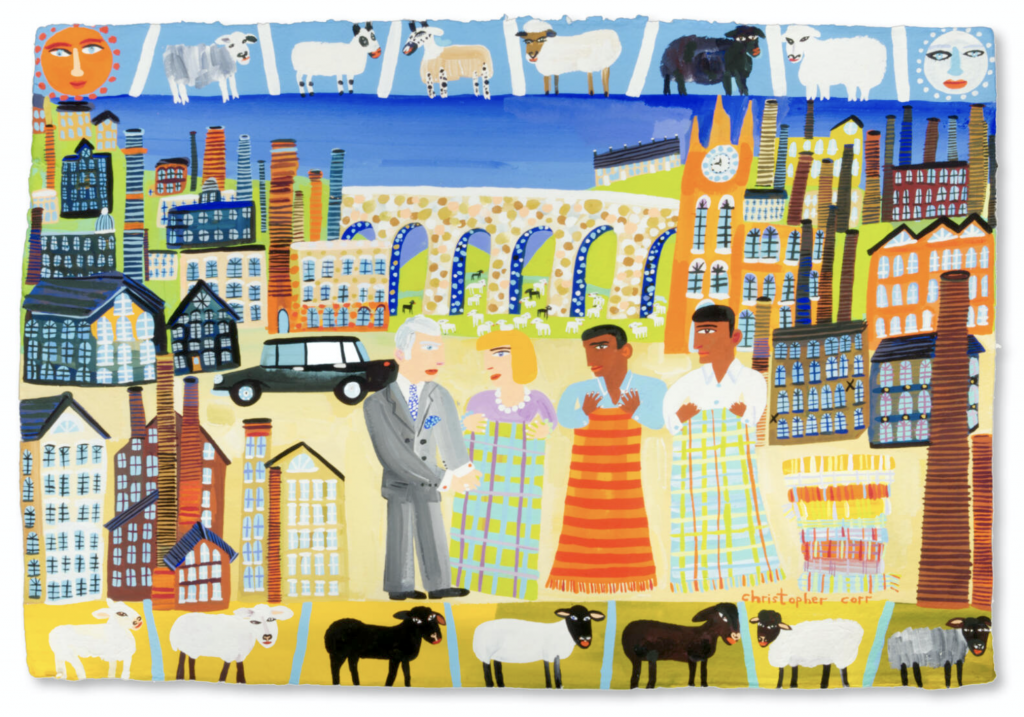 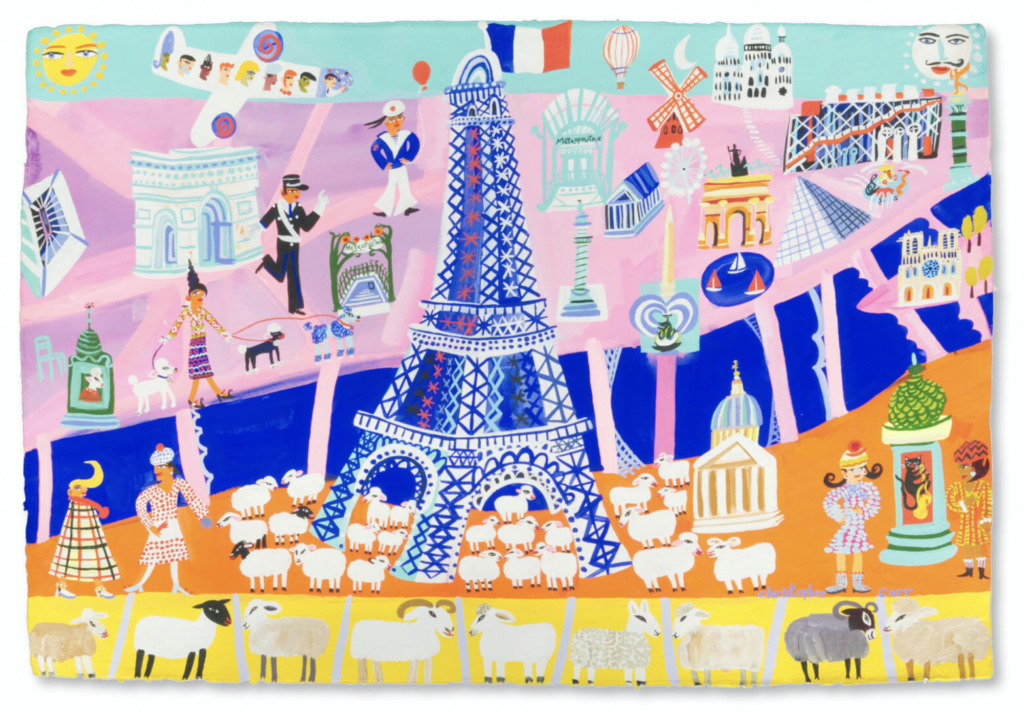 The Campaign for Wool staged a wool event at the Palais de Tokyo, overlooking the Eiffel Tower, during Paris Wool Week, September 2014. It was focused on the fashion stores in the 16th Arrondisement. 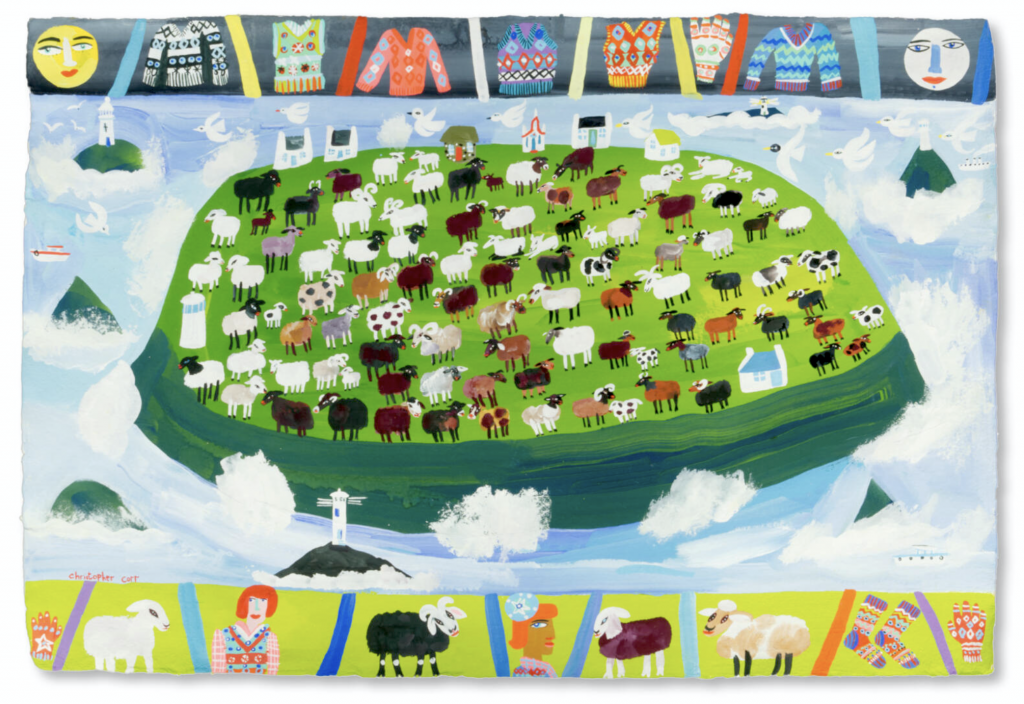 For a decade, the Shetland Isles has held its own Wool Week every September, gathering together traditional spinners and knitters of Shetland wool. The human population of the Shetlands is outnumbered four-to-one by its population of sheep. 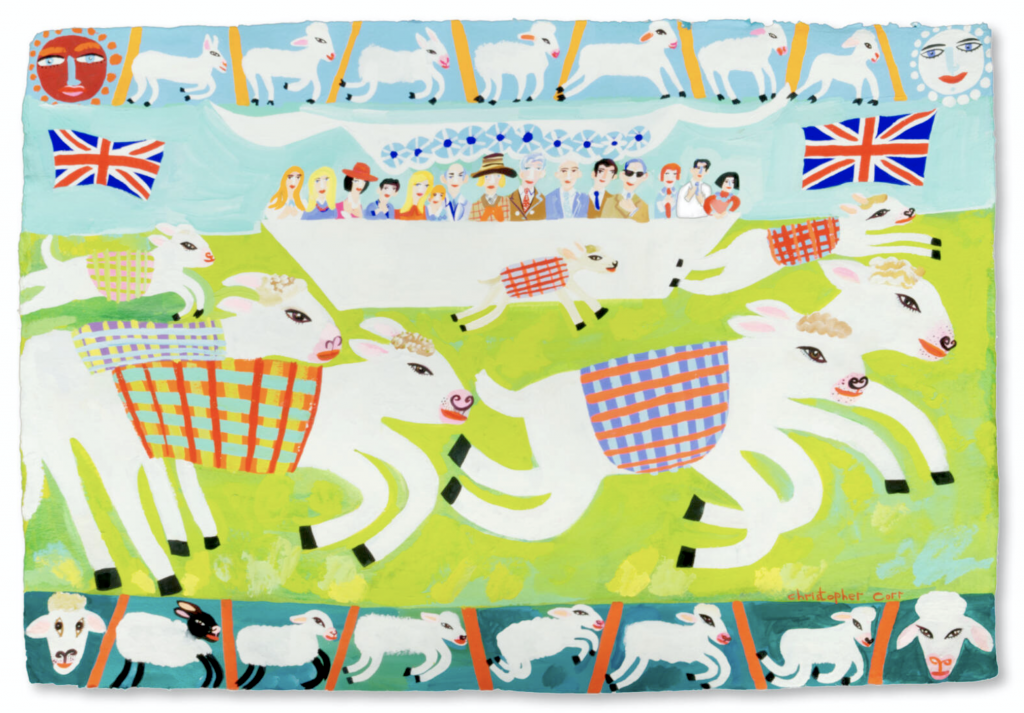 The Campaign for Wool sheep race being watched by HRH The Prince of Wales and the Duchess of Cornwall during a day at the Ascot Racecourse supporting the Prince’s Countryside Fund. 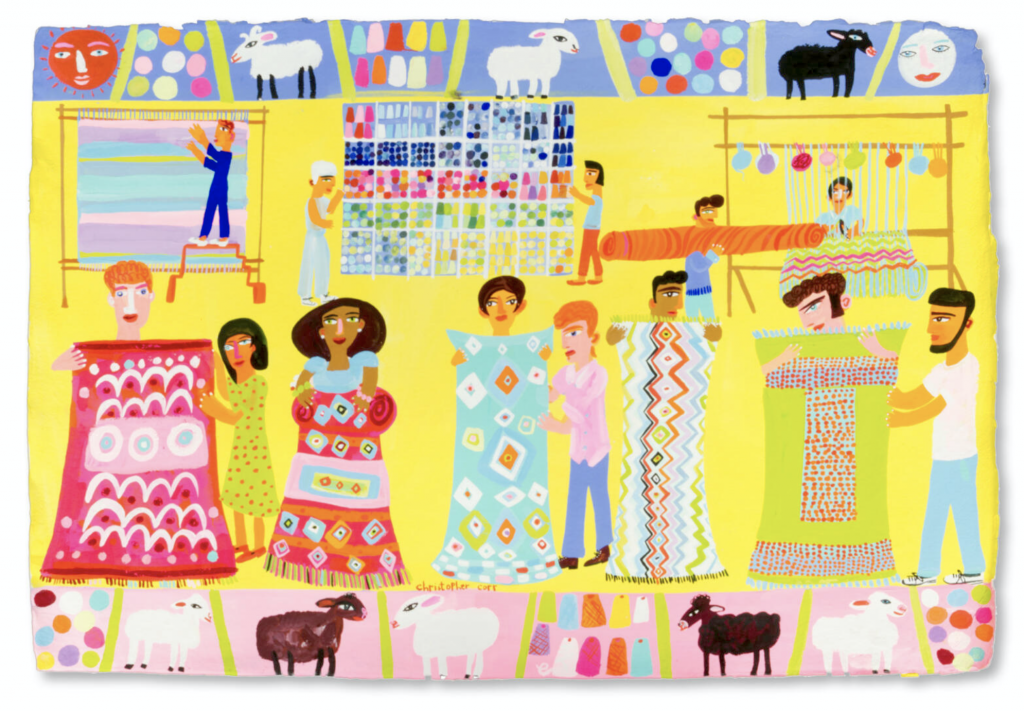 The United Kingdom has long been home to wool rug and carpet manufacturing. The picture also illustrates the art of hand knotting rugs in the Indian sub-continent, where British and New Zealand wools are blended with Himalayan mountain wools. 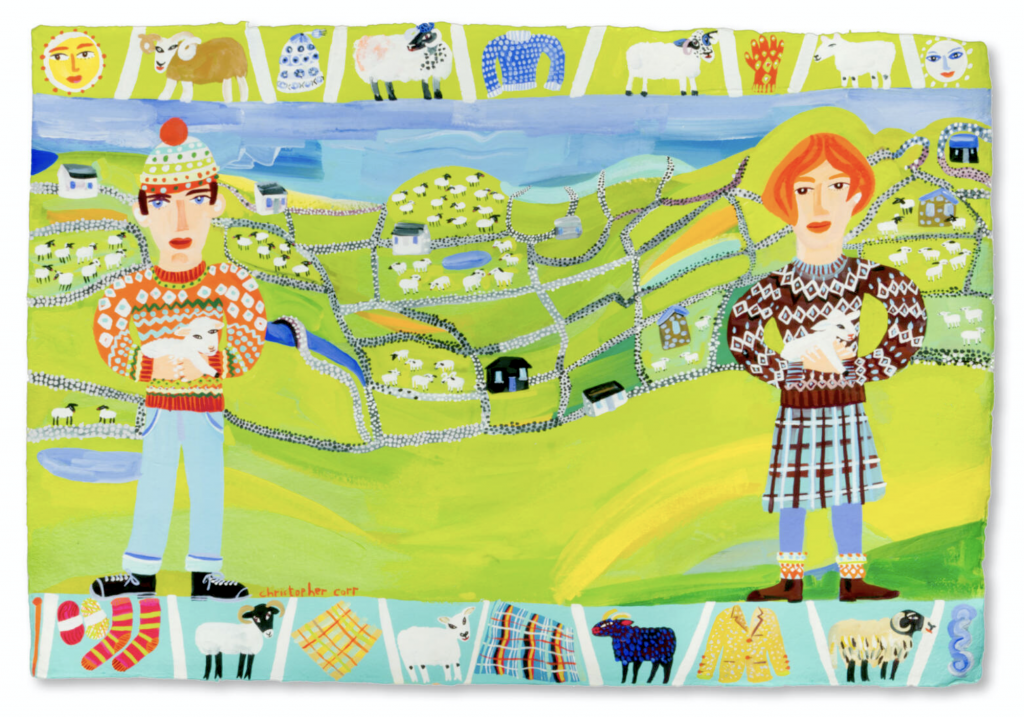 This picture illustrates wool growers in the Yorkshire Dales, where the principal breed is Swaledale, used in the manufacturing of local tweed and heavy winter knitwear. Certain qualities of wool from the Swaledale and other British breeds are ideal for insulation and flammability protection.

The Campaign For Wool

One thought on “Campaign For Wool”