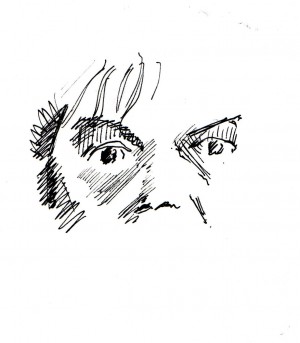 This is a true story and it happened on Rosslyn Hill in Belsize Park, one evening a few years ago, though the pictures you see are not from there, no. These haunted trees are from the rookeries of the notebook, this winter’s trees signalling to each other through the pages. 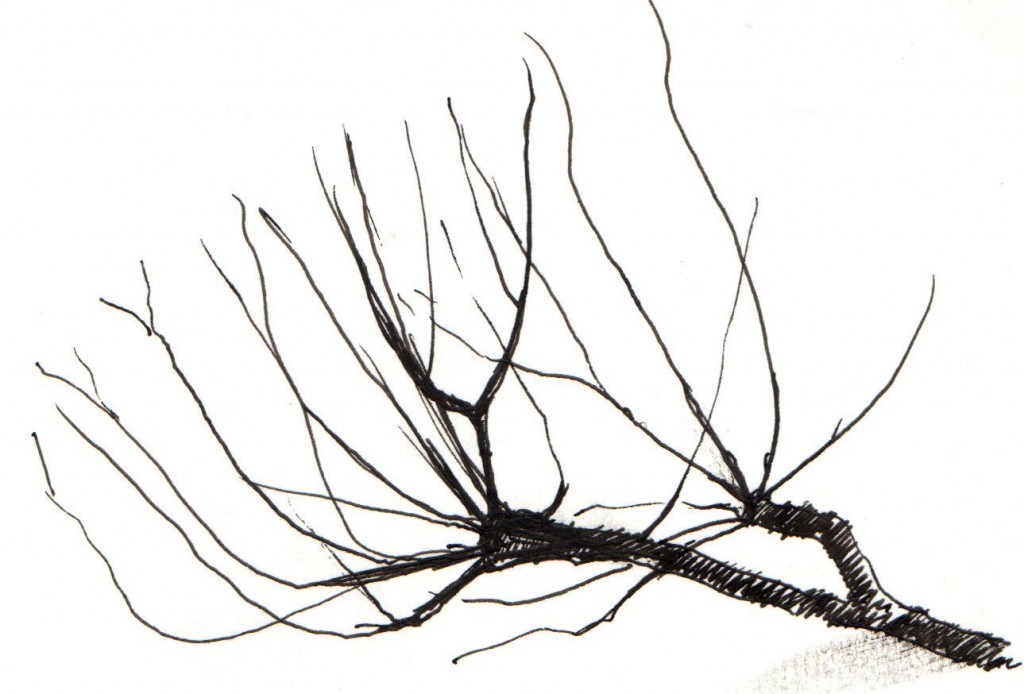 Late in life, Dr Freud found himself plagued by feelings of the uncanny, moving silently under the mechanical and the material. What might otherwise be regarded as accidents of circumstance seemed to be communicating with him, as if the cosmos had him in mind, specifically. He didn’t like it and he didn’t know what to make of it. Neither will you. Neither do I, but every word I tell you now is true – 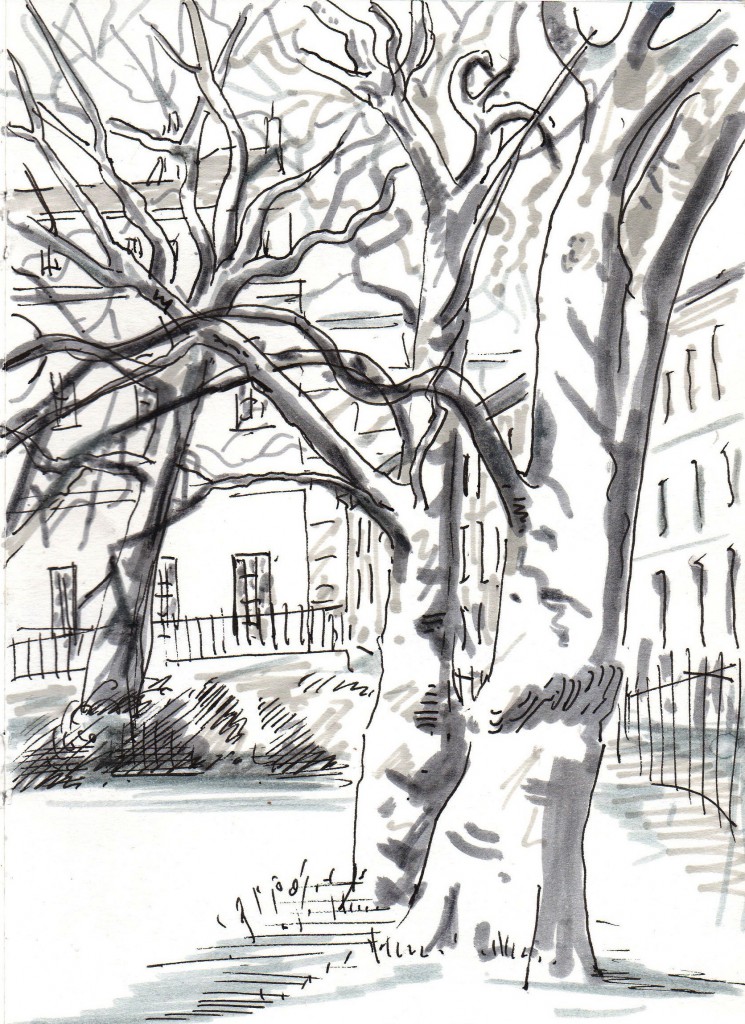 I’m in Belsize Park, an hour or so after work one evening and it’s the crossover between autumn and winter. I’m sat in a friend’s sunken front yard, drinking a Heineken and talking. There’s a moon waning in the clear sky, bright stars and little wind. We discern a light autumnal mist in the tree tops. Most of the leaves have fallen. When I get up to leave, twilight is passing and nightfall is coming and by the time I turn from the main road at the corner between the pub and the monstrous, derelict church, it is almost dark. What is the church’s name? It’s a place of ruin, not worship. One wonders if it will be turned into flats. Who would live in a place like that? 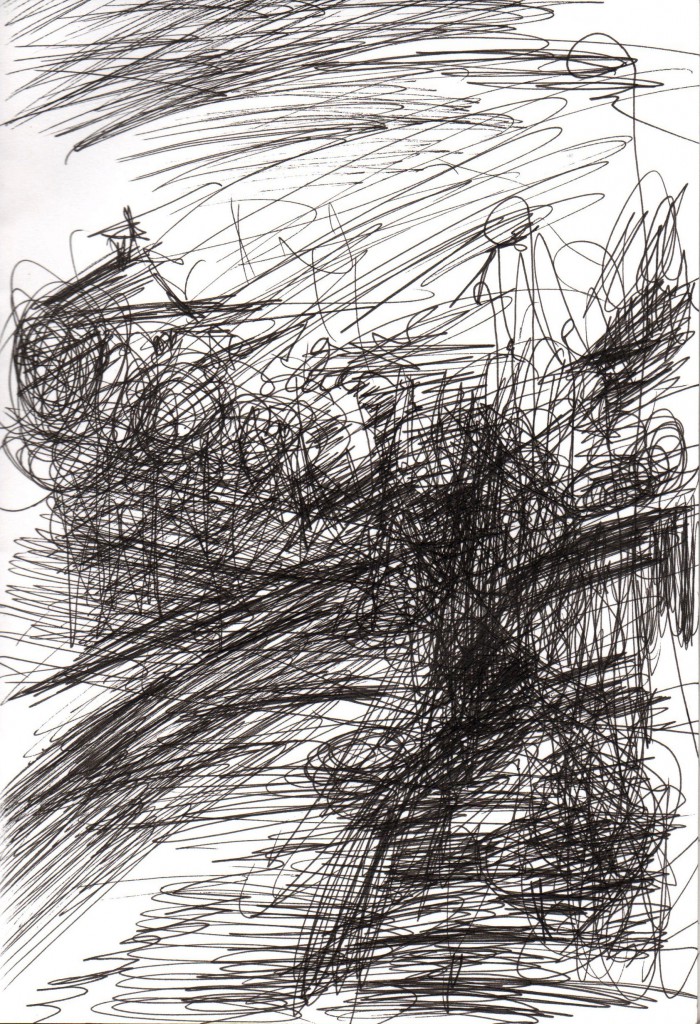 From Roland Hill, a narrow, unnamed road descends down towards the hospital car park and the shops on Pond Street. There’s no one about, which is unusual, and none of the streetlamps are working. Which is also unusual. I note the pale glow of the car park’s lights down below. Then I see a woman walking up the hill towards me. She’s by herself, and I give her that involuntary once-over glance. She has silvery blond hair, and I sense her looking up at me with a mix of apprehension and expectation, as if she was both afraid and in need of something. Her face looks young but I get the impression that she’s elderly, perhaps because she’s dressed in beige skirts, a long shawl, and I’m reminded of pictures from old books. Her face seems to glow, which I put down to the lights of the hospital car park. 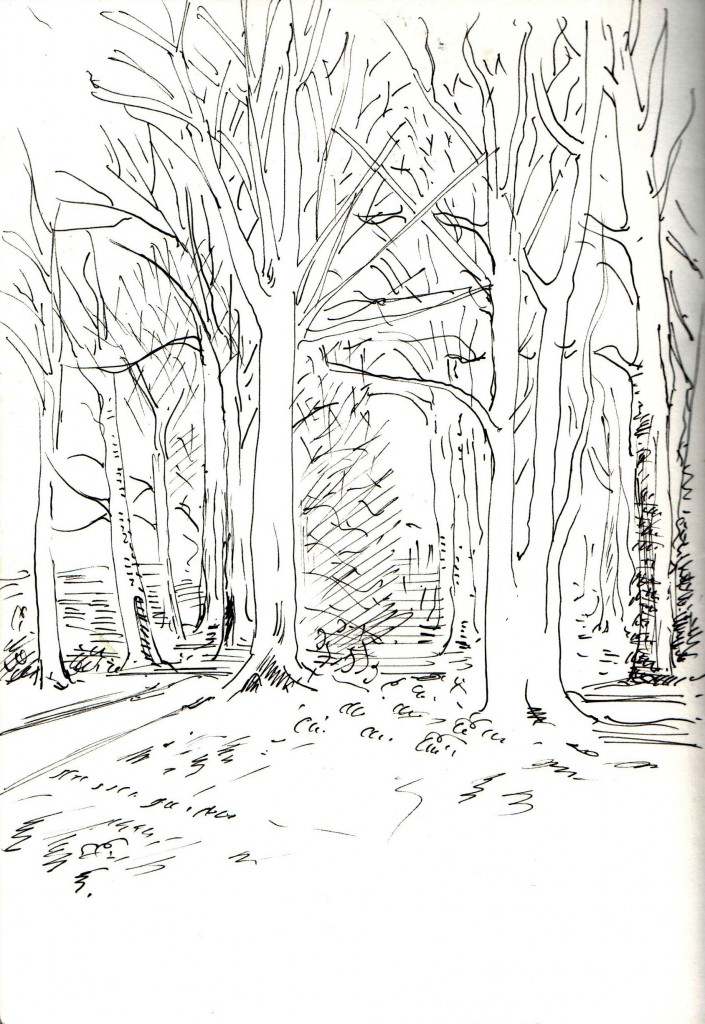 Walking towards her, I feel the self-consciousness of a lone man walking towards a lone woman on a dark pathway – how many folk tales have ribboned out of such encounters? I look down, check the footing of the uneven pathway, and when I look up again – I’d guess not even a second has passed – there is no one there. The woman has gone when there was nowhere for her to go to. 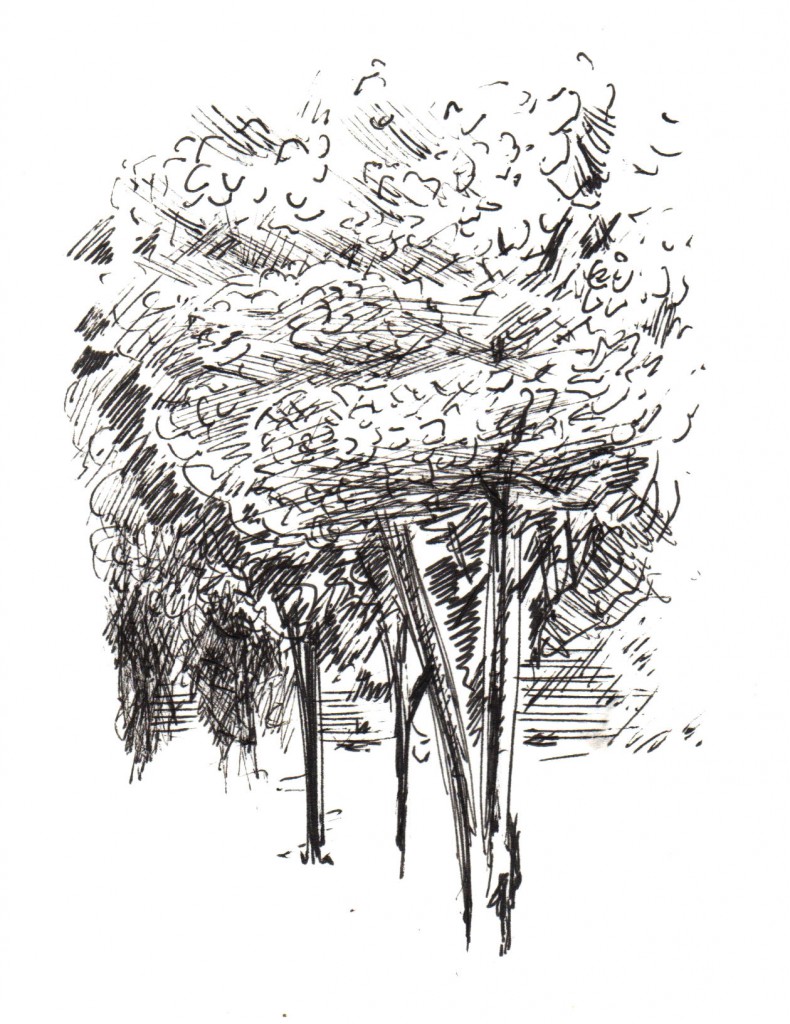 So if she wasn’t there, she never existed, but I had seen her; so who, or what, had I seen? I carry on walking down the hill and as I walk past the red brick wall of the hospital garden I get the distinct sensation that she’s still there, and the apprehension that she is about to pass through me and that she wants to stay inside me, of all things. What I feel is involuntary, an almost physical reaction. But I get the feeling that I should not – must not, by any means – let her rest inside me, and that she must pass through. I do not have any precedent for thinking this, but I keep on breathing and walking and I feel her sweep through, a distinct presence, an experience I’ve not encountered before tonight or any time since, of someone actually passing through me, confirming first of all that there is a me to pass through. The feeling stays with me far beyond the hospital grounds, flashes of her presence even as I pass through the ticket barrier at Hampstead Heath station. I can’t account for it. 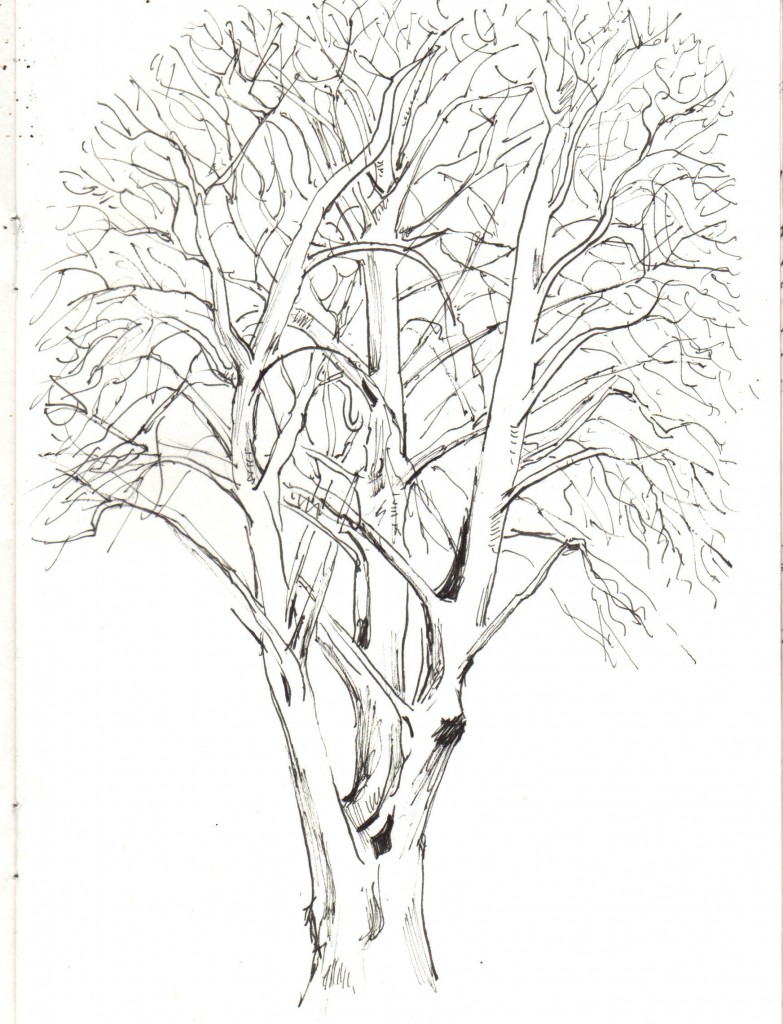 What I’m saying was that there was a physical effect, a little like that sense of someone invading your personal space, but greatly amplified. These were sensations, not apparitions, and they only faded as the train pulled in and I boarded, feeling a distinct rush of energy, the rolling wave of an incoming realisation of some kind of life outside or beyond the body. 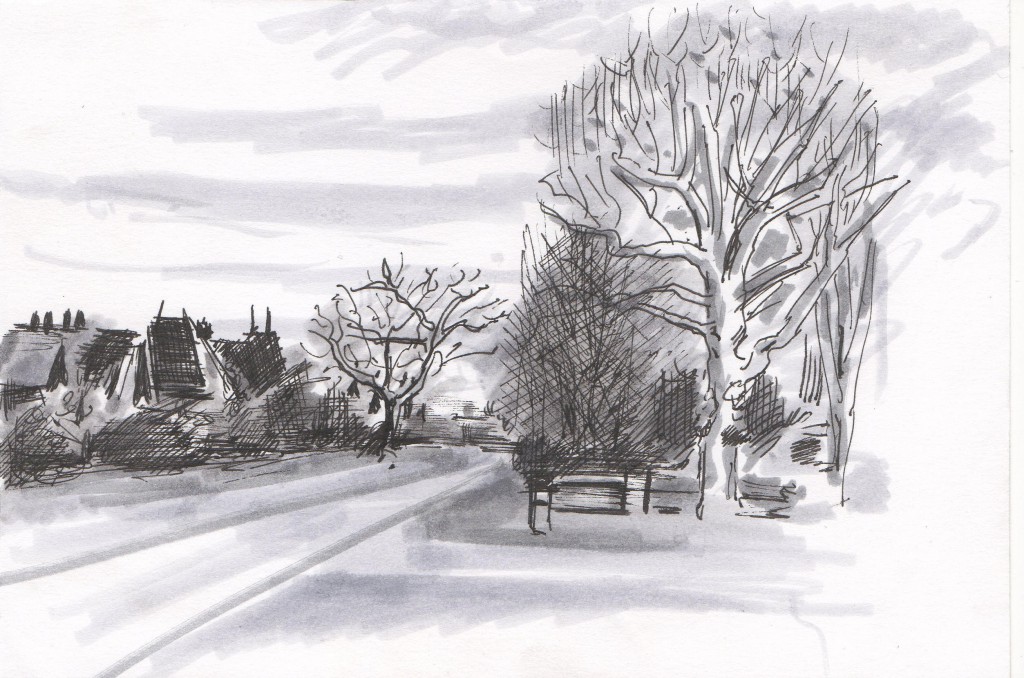 I don’t believe in ghosts, though I don’t actively disbelieve in them either. How should I know? Perhaps it is not a matter of belief but of experience. It’s a funny thing to talk about because it felt like such an ordinary, natural event, though I suppose it was ‘supernatural’. But that’s a covering word, like ‘coincidence’ or ‘placebo’ for processes we can’t understand. I was only passing through. I’ve been down that cut hundreds of times before and since, and it’s never happened a second time. Only the once. So what do we make of anomalous experiences? Science values repeatability. A singular experience is also inescapable.