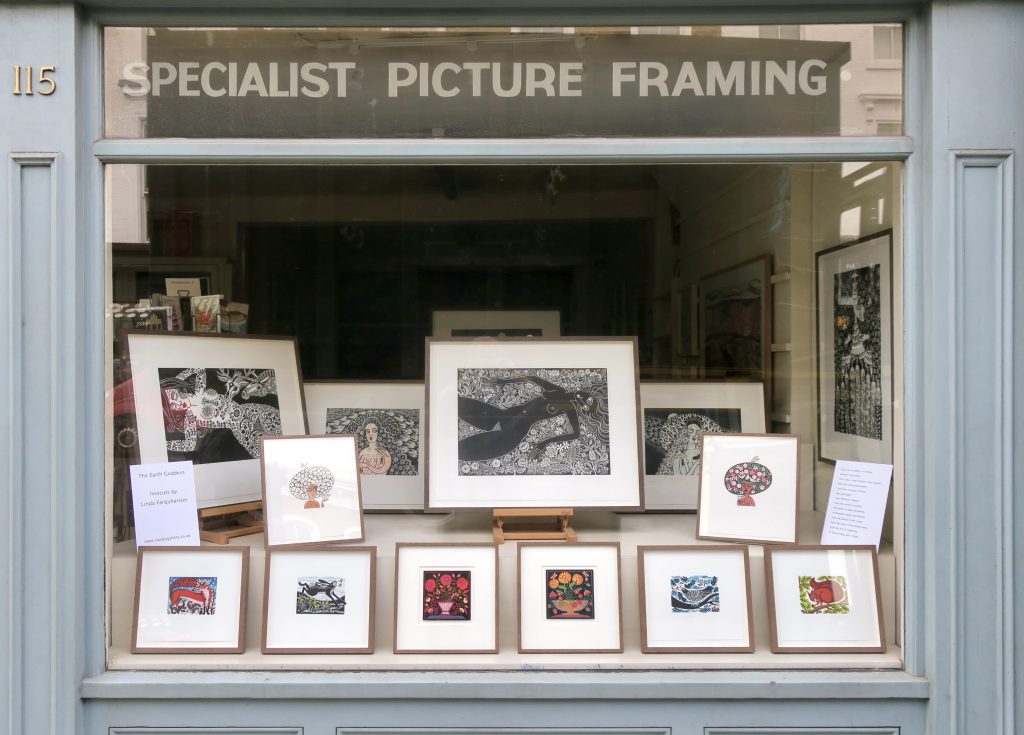 A new window display for the merry month of May. It’s an exhibition of linocuts by Linda Farquharson. Images of the Goddess. Reflections of her various aspects. To take this photograph I had to wait for a passing truck to block out all the more prosaic reflections of the street. 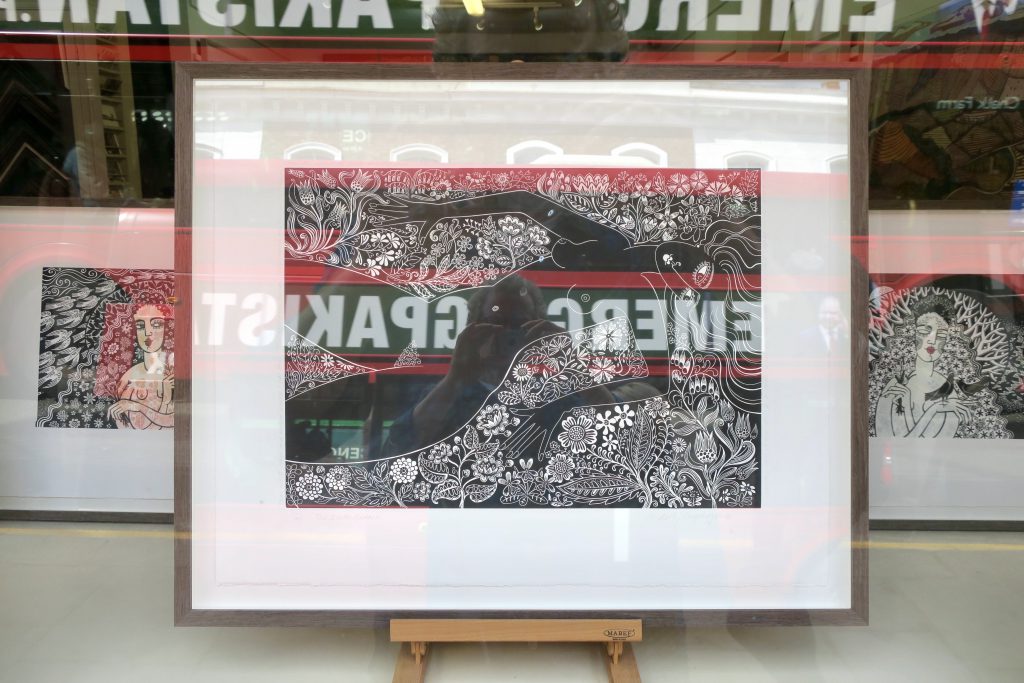 Sometimes reflections can conjure curious but unintended messages. Excuse me if I chip in with a few occasional window photos, but maybe it’s better now if I let Linda tell the story in her own words… 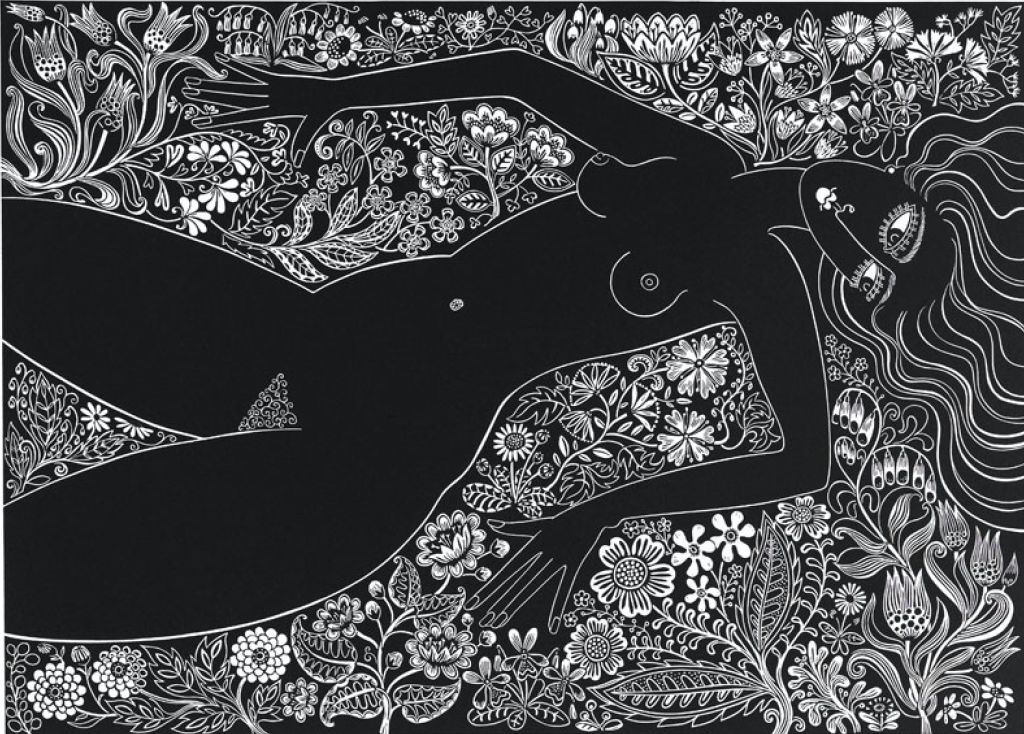 For some time I have been interested in The Goddess as she is perceived in pre-Christian and Celtic cultures. Although the journey of ideas initially started with Eve and The Madonna, a Christian re- imagining of the goddess, then back to the Celtic goddess, The Cailleach and the Welsh Goddess, Blodeuwedd – a Goddess made of flowers.

A section of the poem Cad Godeu, the Battle of the Trees, taken here from JG Evans’ translation of Taliesin:

Twas not of father or mother
whence I was born,
Thus after a new fashion I was created
from the nine constituents:
From the essence of fruits
did God begin;
from Primrose flowers
from the pollen of shrubs
the pollen of Oak and Nettle,
of Meadow-sweet and Broom;
from the Mould of the earth;
from the water of the Ninth wave;
from the fire of Lightning
of these things was I made. 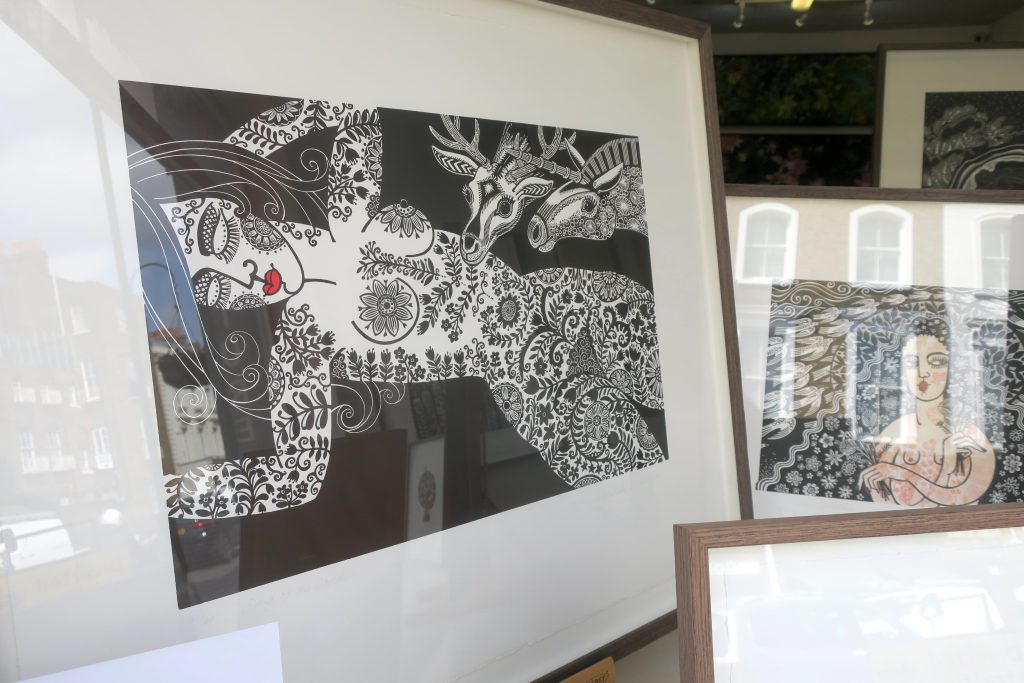 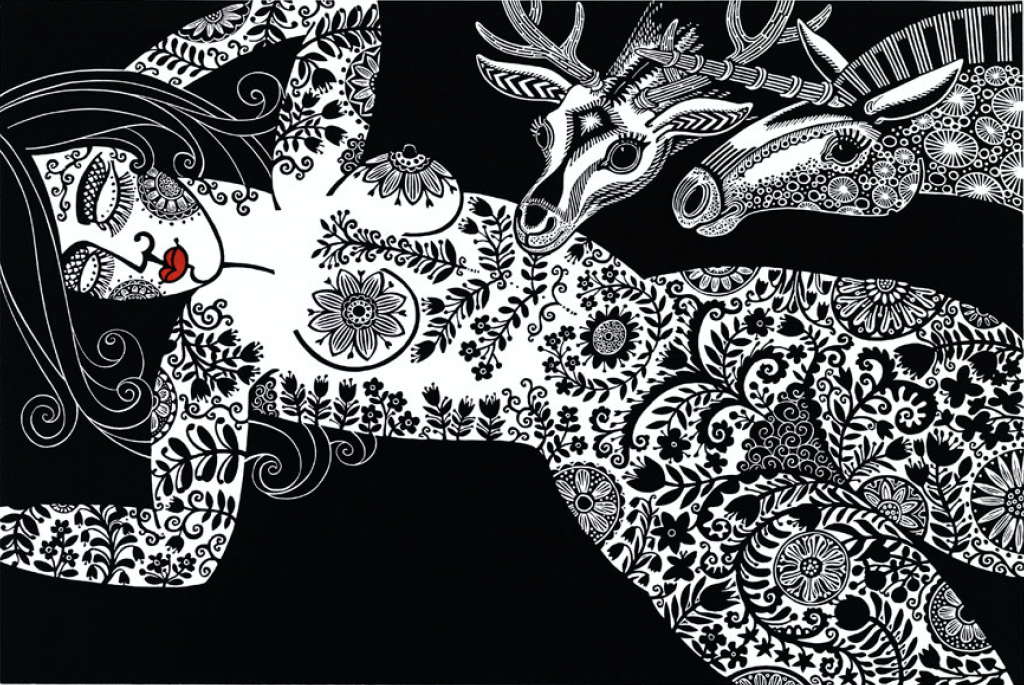 Song of the Goddess

The Welsh goddess, Blodeuwedd, is conjured by the wizard Gwydion, from buds and blossoms in the Mabinogion.
Blodeuwedd is another name for Olwen, the May-queen.
In many cultures we dress the May-queen or young girls in garlands of flowers.
And men with garlands of Oak leaves which have associations with young love, rights of passage, fertility etc.

Another reference is Alan Garner’s The Owl Service.

Victorian ladies gave Nosegay or Tussie Mussie (posies) of flowers with meaning to lovers and friends – The Language of Flowers compiled and edited by Mrs L Burke is beautifully illustrated and quite amusing! You could send your enemies a very pretty bouquet of flower with a hidden meaning! 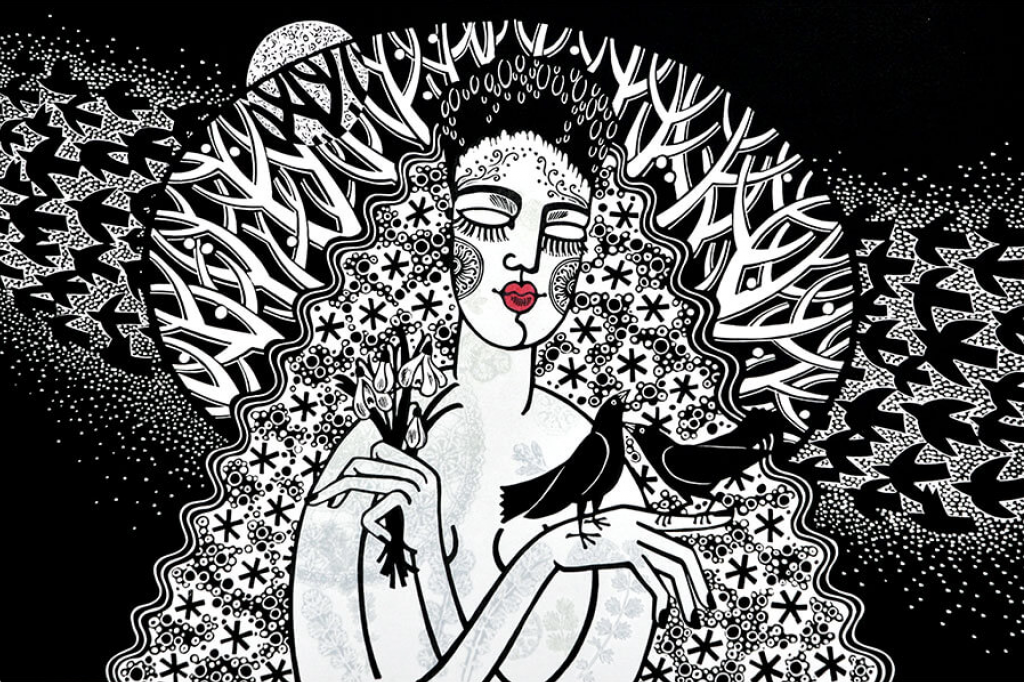 Song for the Moon 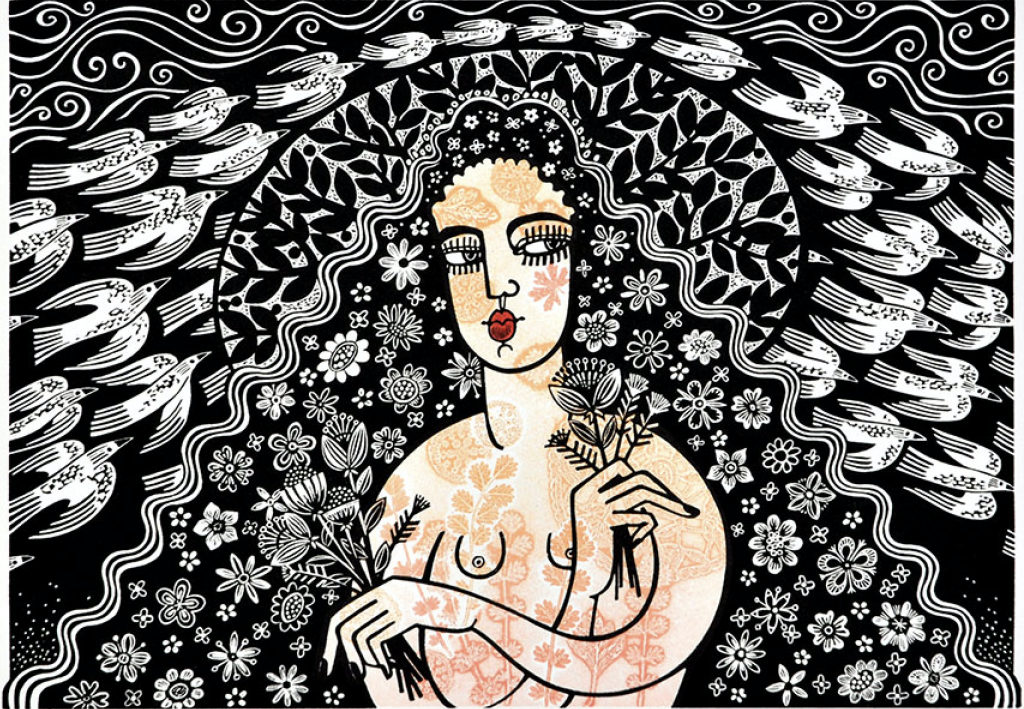 Another point of inspiration is the contemporary trend for tattooing.
Modern tattooing is very artistic – full sleeves, backs – influenced by the Japanese.
I like the idea of trying to create prints from printed leaves/flowers/lace to give the idea of nature’s tattoo. The idea that you could lie in a bed of flowers and they would be imprinted on your skin. 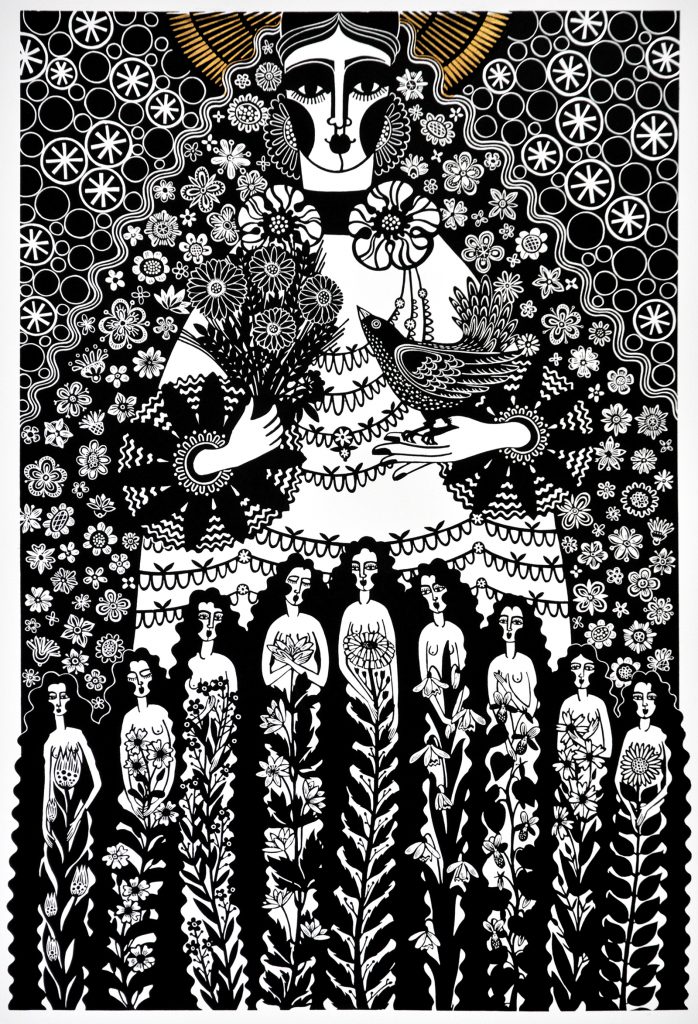 A further inspiration was when I read Stuart McHardy’s book Quest for the Nine Maidens and discovered there was a Nine Maidens Well on the shores of Loch Tay.
And nine is a number that is significant in mythology –
The Nine Maidens are said to have attended the Goddess; The Cailleach. 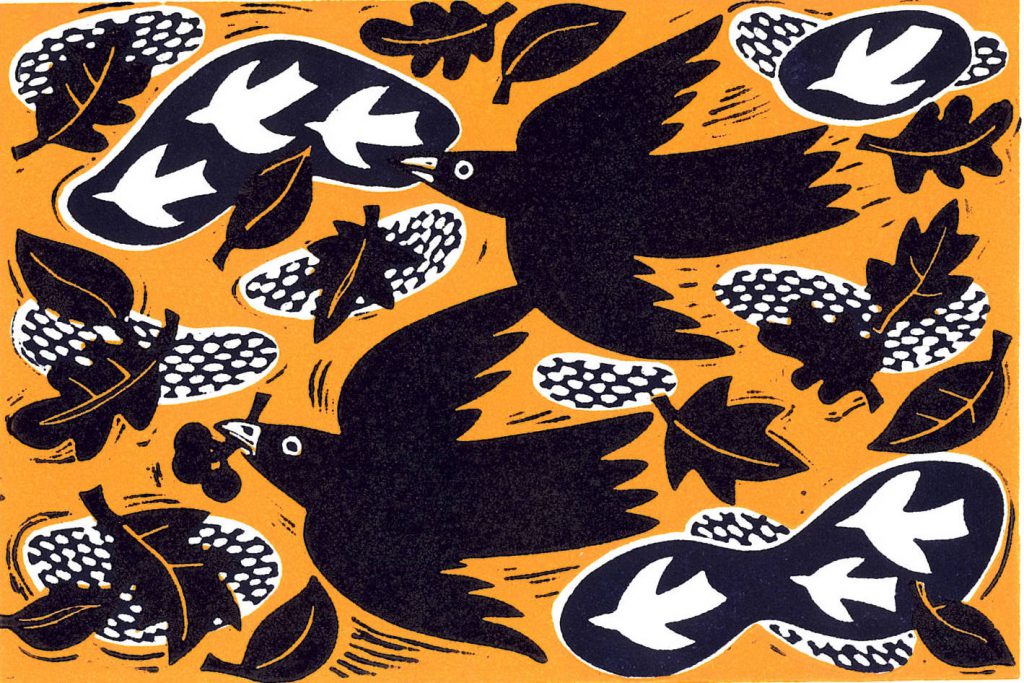 The earth goddess myths are all linked to nature, plants, animals, birds, the seasons – all the imagery I like. Living in the countryside I am surrounded by wildlife & nature – hares, foxes, deer and birds, trees and plants – and I often find myself picking wild flowers to draw when out walking with my dogs. 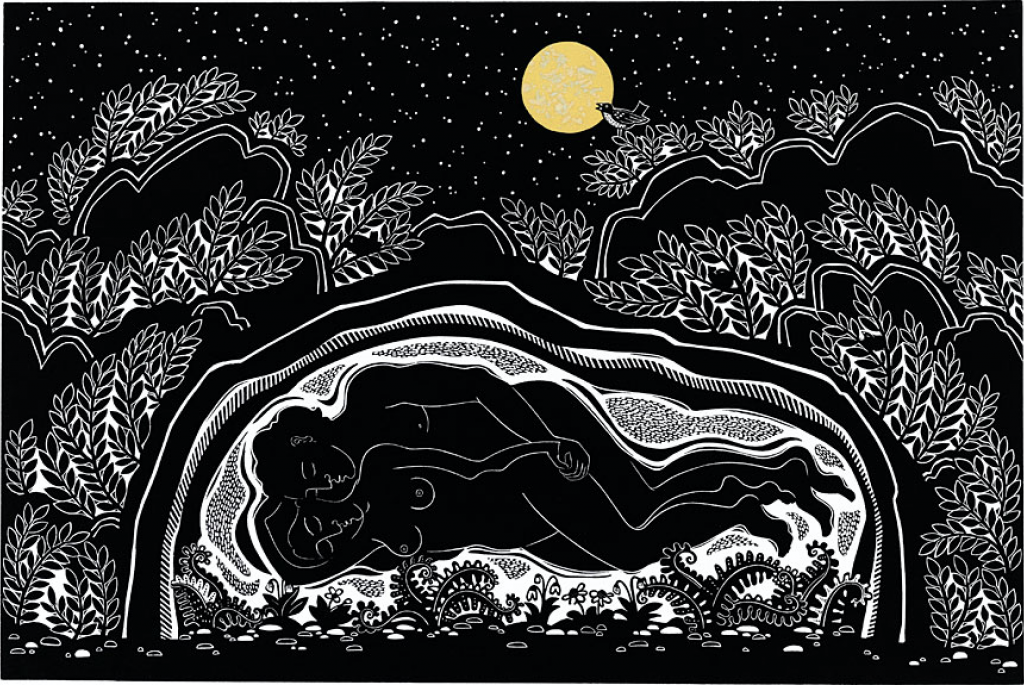 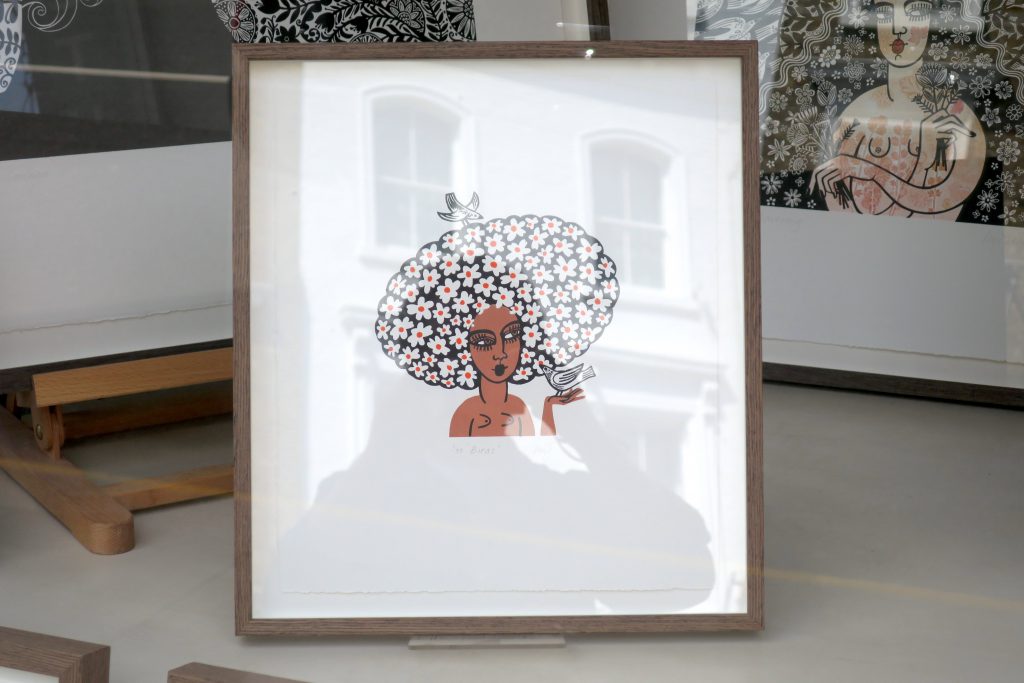 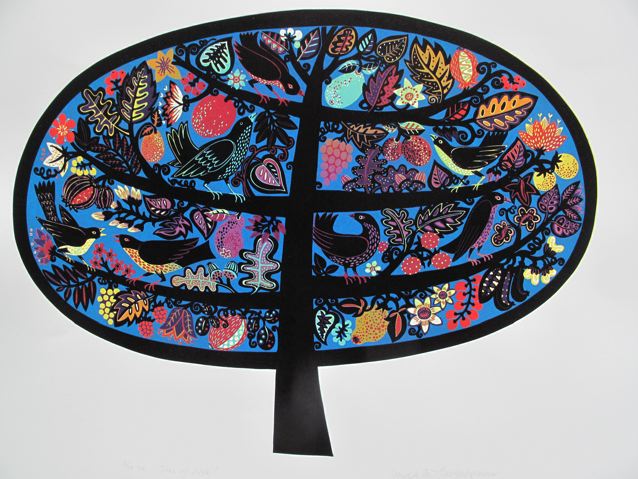 PS: A late arrival. It’s an endangered species, the last one of the edition.

One thought on “The Earth Goddess”