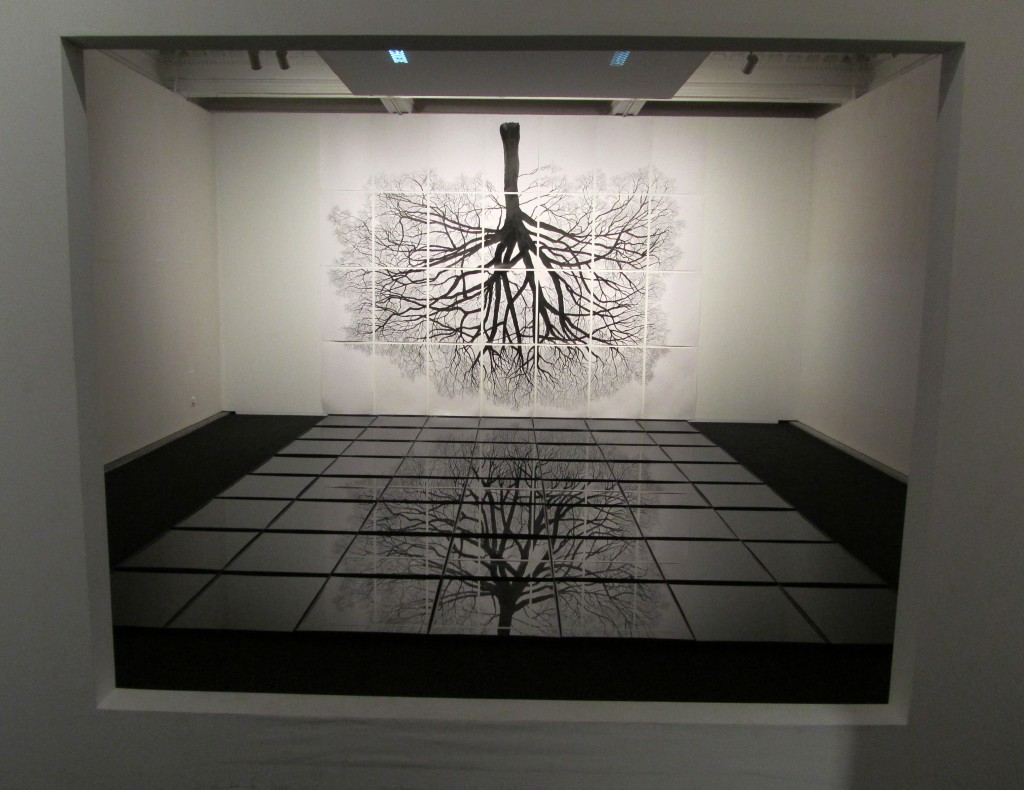 Last summer on holiday in Catalonia, we visited Girona where we chanced upon this striking installation by Àlex Nogué. It occupied one room of a small municipal exhibition space, Bolit-La Rambla. It consisted of 28 sheets of paper with ink and pencil drawings on the back wall, 56 trays filled with water on the floor, 2 digital second counters on the ceiling, one counting forwards and one counting backwards. It was possible to step through the hole in the wall and walk around the installation, but really best viewed from this position where it appears framed. It seemed to be an archetype, a symbol of time & place, heaven & earth, shadow & light, growth & decay. It was so simple and elegant and memorable, and more perfect for being found by accident.

I felt I should write something about it for this blog, and the more I thought about it the more I noticed that I am surrounded by trees and their images. Maybe I can’t see the wood for the trees. As a boy I seemed always to be climbing trees, up through the branches and also down among their roots, where they were exposed along the riverbank. I would be mesmerised by the light through the leaves and always cried out when our little Morris Minor entered a green tunnel, and Dad said avenues of trees were the inspiration for the naves of churches. A walk down the aisle was a walk beneath trees. Sue also loved dappled things and I like to imagine us together beneath one of those riverside trees. 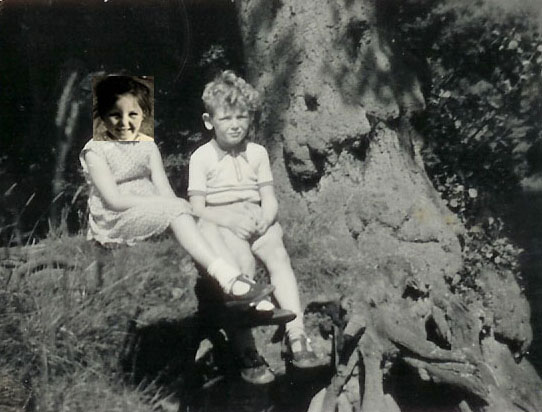 At school I painted a picture of a tree which was also a face, with leaves for hair and beard and eyebrows. It never occurred to me until now that it was a self-portrait. At college I made a double-sided painting that hung from the ceiling – a wooden trellis interwoven with strips of canvas and freely daubed with flesh tones and leaf greens and titled The Green Man. Later I made paintings on canvas stretched over branchwood and found inspiration in Pygmy barkcloth paintings.

I look around the house now and I see a Samuel Palmer etching, Morning Of Life, with the sunrise bursting through the trees; a photograph by James Ravilious of sheep beneath an oak tree in Devon, In The Heat Of May; 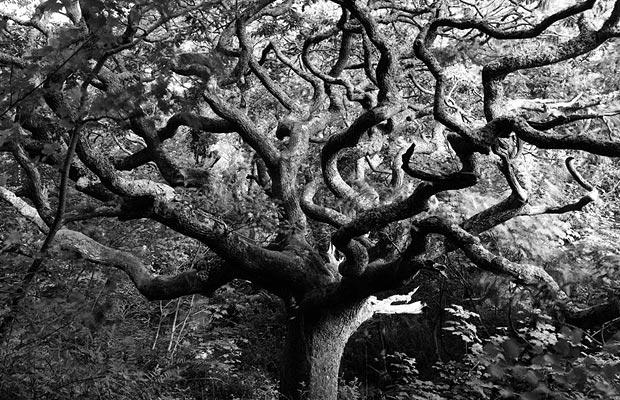 another Ravilious, this one a greetings card on the shelf with the title Oak Tree (After Mondrian), Welcombe, Devon. Welcombe is somewhere I’ve returned to many times over the years, walking and cycling its rugged coast and ancient woodlands. 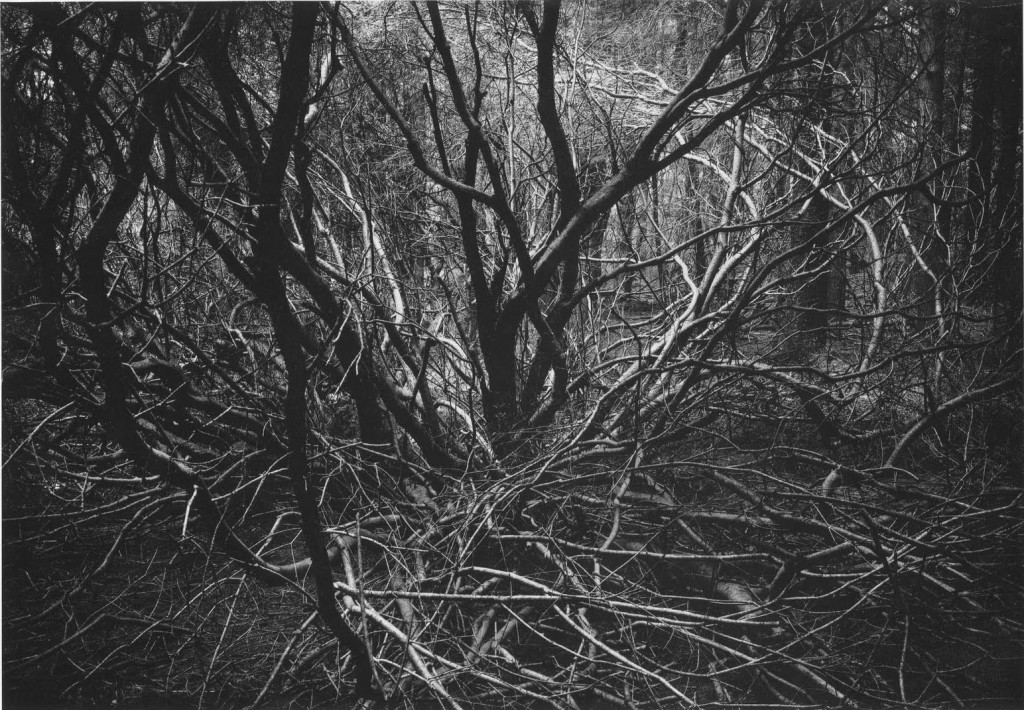 Above our bed hangs a poster with this image, A Quality Of Dancing, for an exhibition of photographs by Thomas Joshua Cooper.

Downstairs is a large aquatint by Anish Kapoor of an upside down tree. I’ve looked at this every day for more than twenty years and it has become familiar as an image of a primitive bronchial tree. 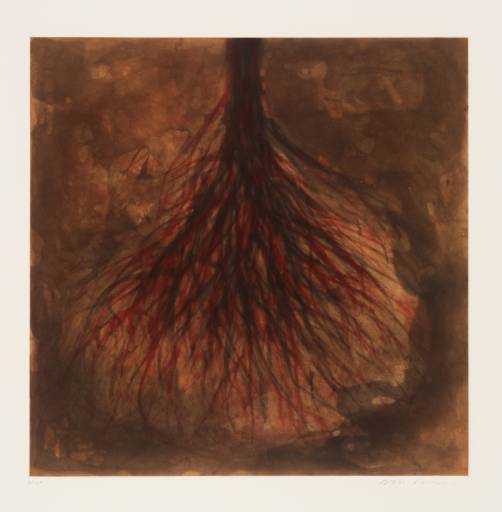 Which brings me to Christmas 2007 and another chest infection, only this time it was thought an X-ray was needed, which led to an MRI scan, then a bronchoscopy, then another MRI scan and probably a few more chest X-rays along the way. I lost count. Then the meeting with the consultant and the most dreadful words I ever heard, “It looks like cancer, it smells like cancer, what else could it be?”. Followed by the most hopeful words I ever heard, “It’s still only small and we can cut it out”. 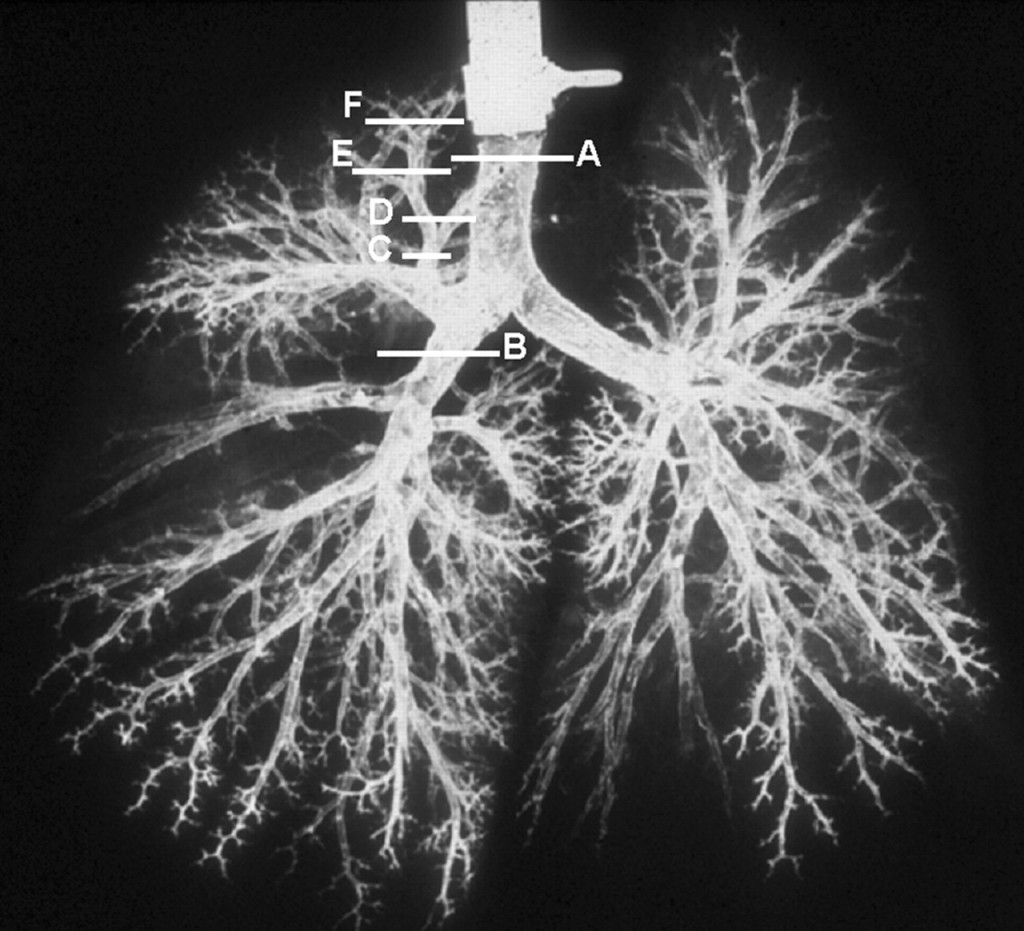 So it was decided that my bronchial tree needed a little pruning and four years ago today I went into the operating theatre at The Heart Hospital in London, to remove a small caseating granuloma from the right lobe of my lungs. But just to be sure they took out almost half the lobe! And then it haemorrhaged! And then later a biopsy showed that it was not cancer after all! So to be safe I was given a six month course of chemotherapy to eliminate the possibility of tuberculosis in case that’s what it had been, though no-one seemed to know for sure.

I suspect maybe too many years in the joiner’s workshop with too much sawdust was causing my lungs to lignify, and I was becoming a tree myself! 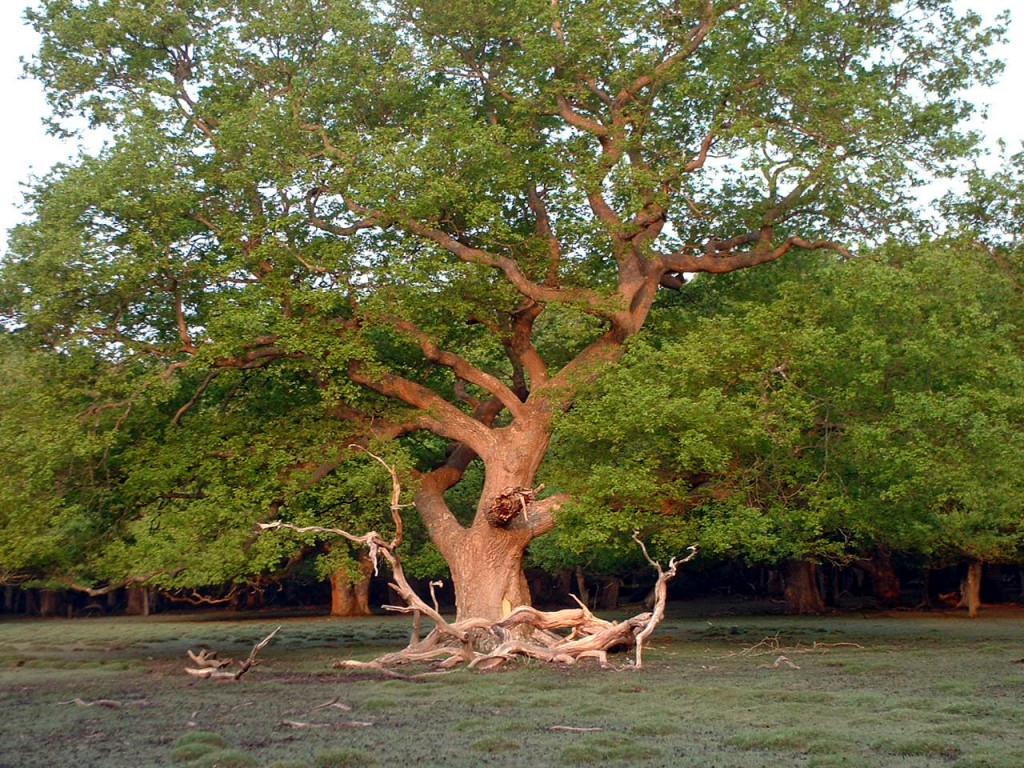 Afterwards we went down to the New Forest and stayed at a fancy hotel for a weekend, and I communed with the trees and commiserated with fellow amputees.

Now on crisp clear mornings whilst the trees are still without leaves, I look at the delicate filigree of their branches against the blue sky, and any shadows there are just birds’ nests or squirrels’ dreys or mistletoe. 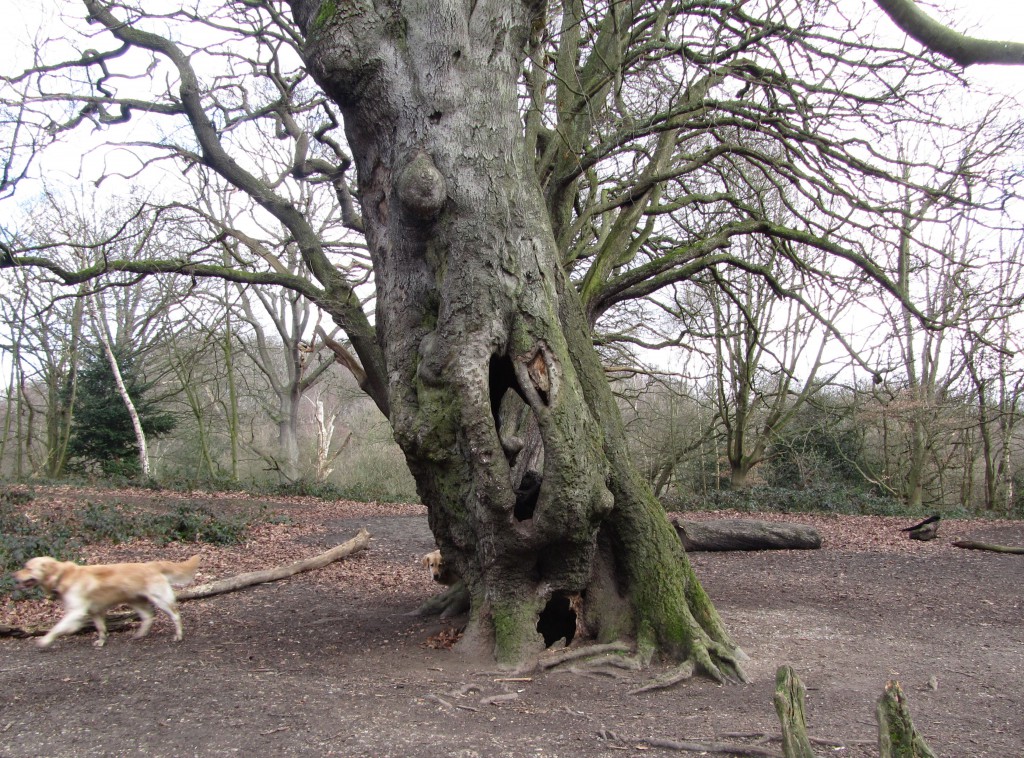 I think I should walk over Hampstead Heath, back to the hollow tree and climb inside like a pagan, to be born again, to be tree-born.