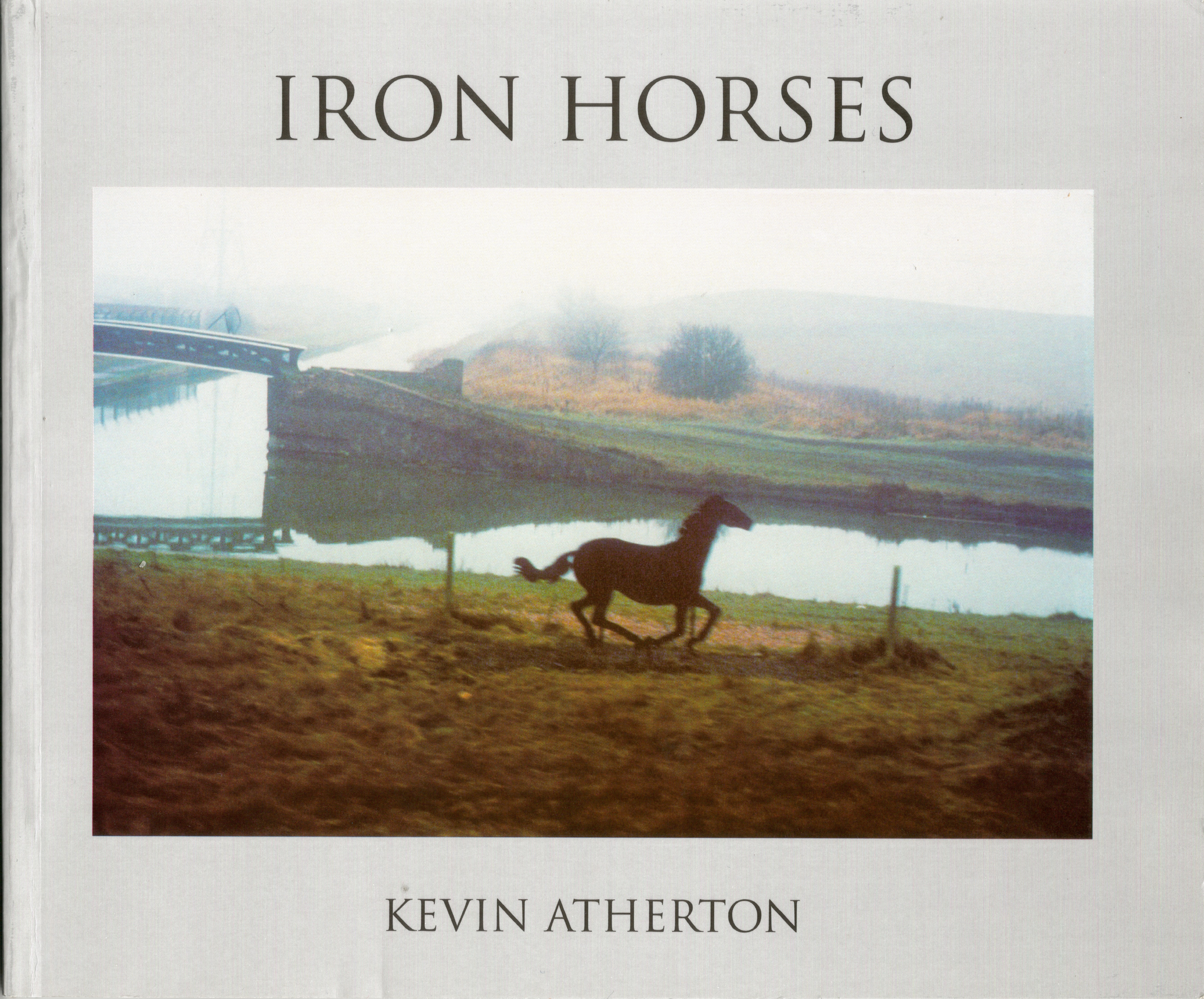 In 1987 Kevin Atherton made a twelve-part sculpture comprised of cut-out iron horses positioned along the railway line between Birmingham and Wolverhampton to be viewed from a moving train. Thirty one years later the horses are still there and this little book is a record of what could be considered to be Britain’s longest sculpture. Here are a few pages. 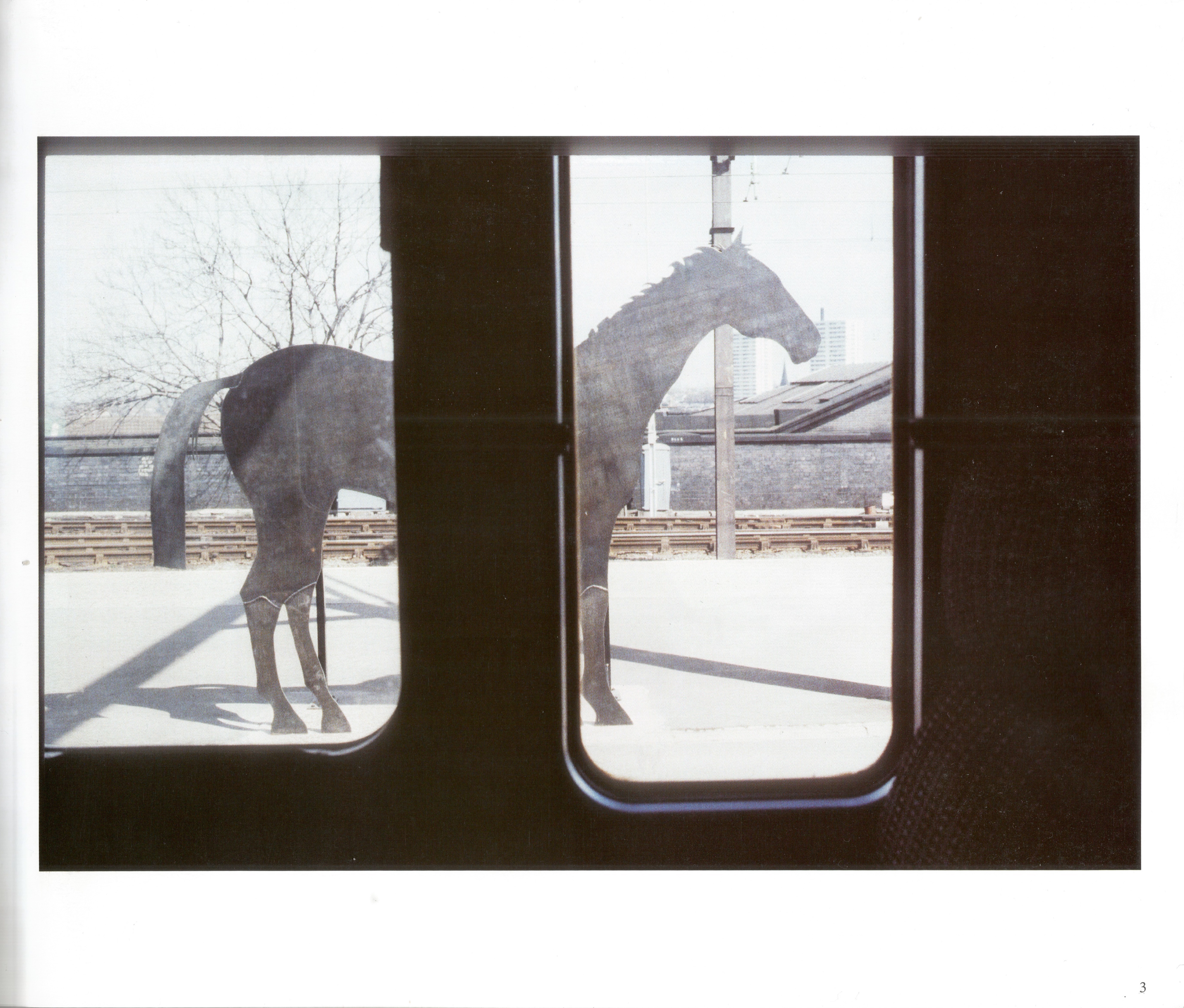 Here we are sitting on the train in Wolverhampton Station, in an area of Britain that, because of the amount of heavy industry that used to exist here, is called the ‘Black Country’. We are facing Birmingham, which is about twelve miles away, and we’re waiting for the train to start. The life-size steel ‘Iron Horse’ stands waiting with us.

I have been showing these images as a slide lecture in art colleges for the past thirty years and feel that I have honed the sequence of slides and what I say about them into a kind of performance. I took this first photograph so as to consciously show the door and the window as a part of the frame. This was in order to establish early on with the audience in the lecture theatre that I am in the train photographing out through the window. In the lecture I make the observation that the photograph is divided into two like a diptych with the train door providing the hinge. Presenting the same slide alongside my written commentary in book form I now realise that a hinge also separates the image from this text. 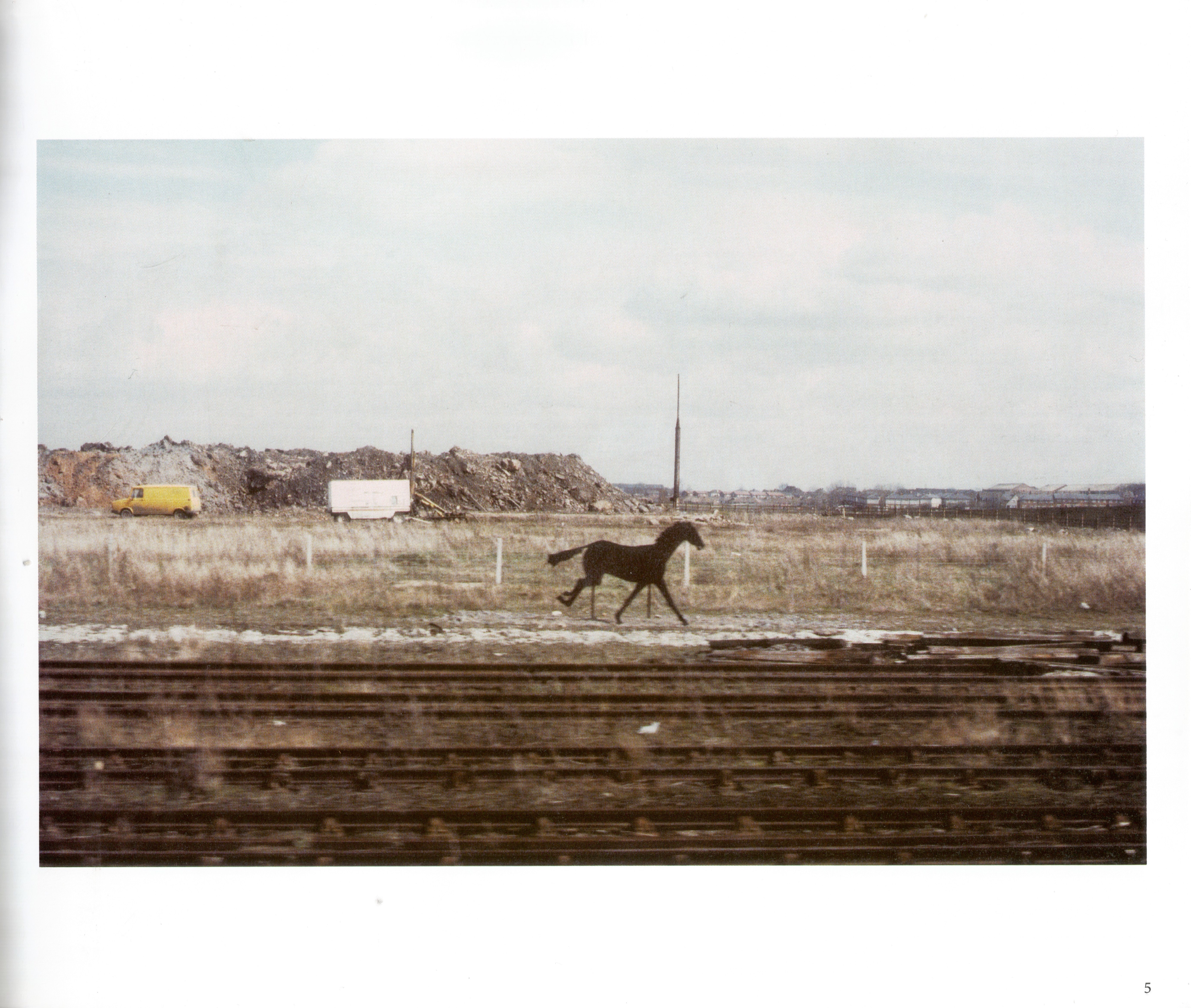 About a mile and a half later and the horse has come up alongside of us, it’s as if he is racing the train having just lost his rider at Wolverhampton racecourse. In the 1920s Réne Magritte produced a series of paintings and collages called ‘The Lost Jockey’ or ‘Le jockey perdu’ that juxtapose the image of a single jockey on horseback riding through a flat and empty landscape. I was particularly aware of this series when I was ‘riding the rails’ looking for the twelve sites for the ‘Iron Horses’ and no more so when I suggested positioning a horse here.

When I was a first year fine art student at Leeds in 1969, Magritte’s images seemed to me to be everywhere but mostly as posters in student flats. Consequently I was dismissive of them. Later on when I opened my eyes a bit more and took on board just how clever Magritte actually was, I realised in my rush to dismiss the popular, that I was being a snob. Despite his presence on the back of a thousand bedroom doors in Leeds, through his paintings Magritte had put his finger on something that was vital; a sense of the strange, made most vital of all because Magritte located this strangeness to be in the world already and not just in his art. This pointing to the existence of the absurd in the world as an empirical observation, rater than as an a priori reflection on the world, is the thing that made Magritte special for me and is the reason why he continues to be an influence. 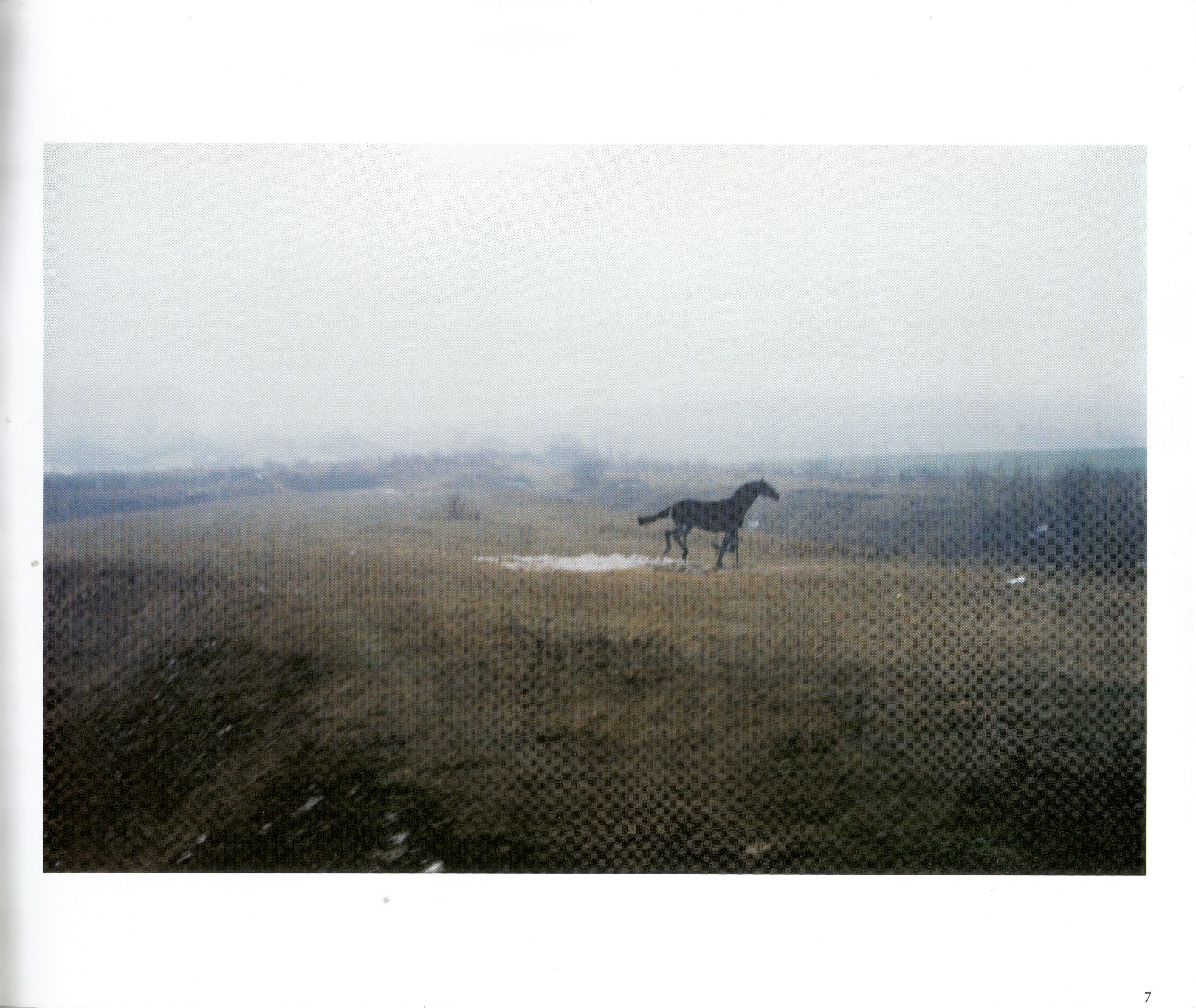 I really like this barren background, not conventionally beautiful in a John Constable way, more like a first world war battlefield painting by Paul Nash, layered with the debris of its own industrial past. In contrast to me, Queen Victoria was not a fan of this part of the English landscape. Legend has it that when she passed through this section of the line she would order that the blinds be pulled down. To this day locals think that, in the way that they are frequently overlooked by central government, the blind continues to be pulled down on the West Midlands.

Horses, especially of the piebald and skewbald variety, are frequently seen from this section of the track, tethered here by their owners to graze for free. When I was installing the horses in the winter of 1987, for a few days I was coming up on the train from London each morning in order to check on their installation at their various sites. Looking out of the train window on one of these early morning visits there was a horse just here outlined beautifully against the dawn sky and perfectly positioned, except for the fact that he was facing in the wrong direction, looking back towards Wolverhampton. Mistaking the horse for one of my own and thinking that there had been a cock-up with the installation, it was with great relief when the silhouetted horse slowly turned around, as if on request, and took up its correct position pointing towards Birmingham.

One thought on “Iron Horses”