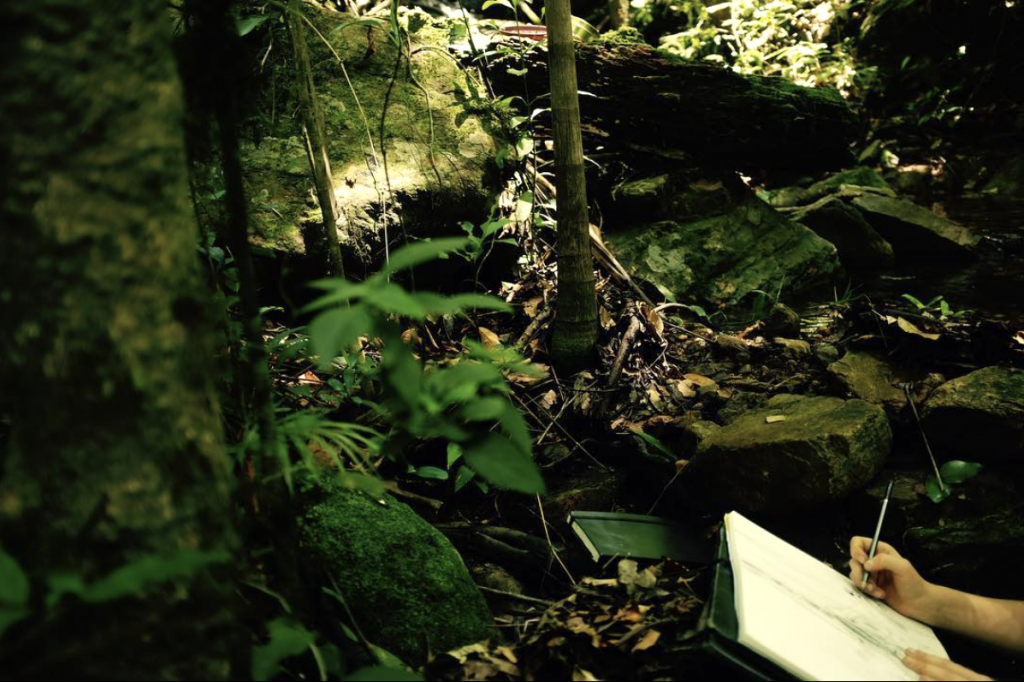 For years now, each spring, Jelly Green has found refuge in the rainforest. She gradually realised she was developing an allergic reaction to the pesticide-sprayed fields of her native Suffolk, and so she escaped to the tree-clean air of Brazil, Sri Lanka, Borneo and New Zealand. The paintings she made there can be seen at Gallery@Oxo from the 4th to the 7th of April. The exhibition is called Devour. The paintings are delicious. Come and see and devour them with your eyes. 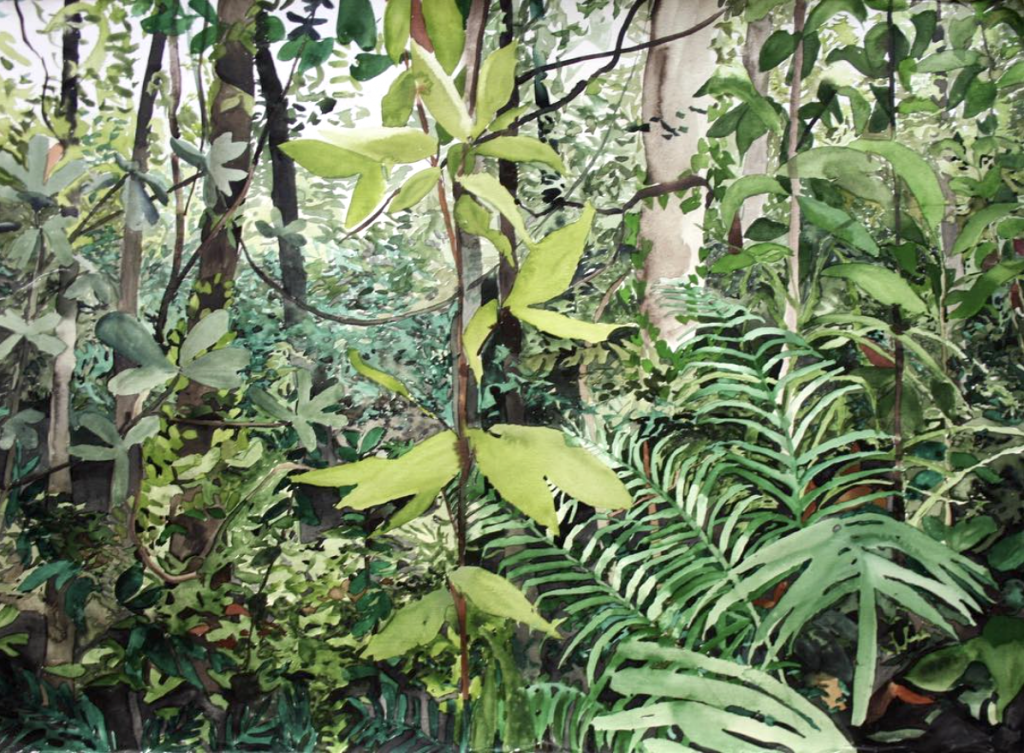 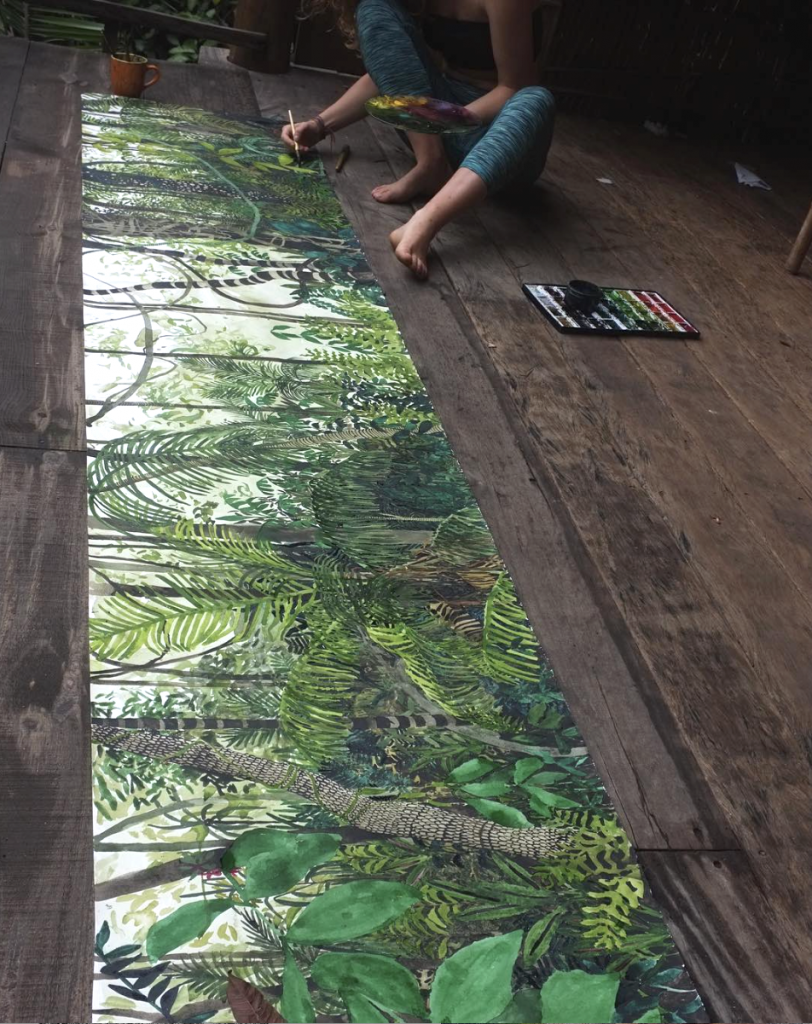 Painting in the Jungle 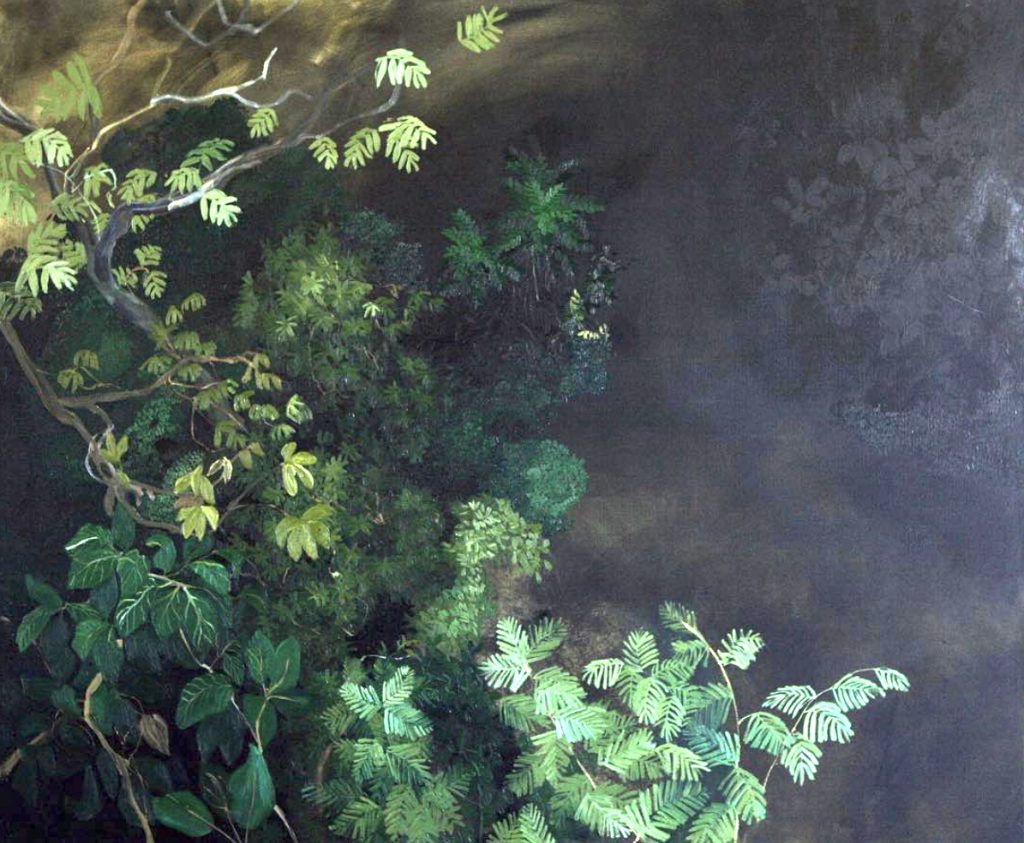 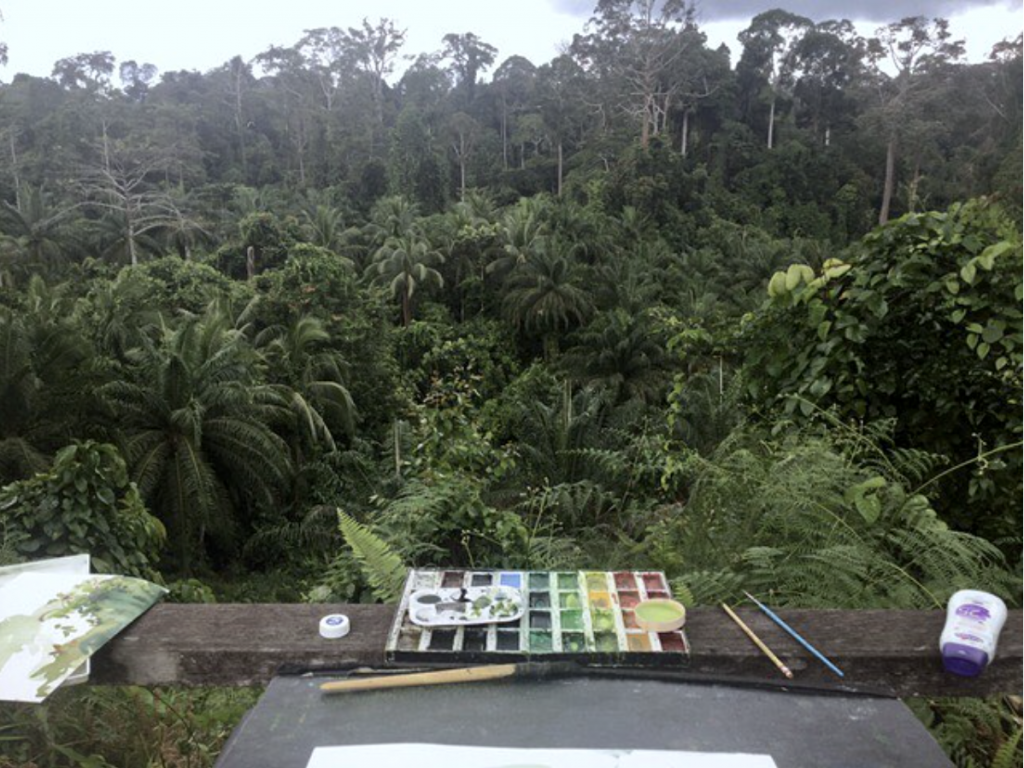 Painting the Jungle in Borneo 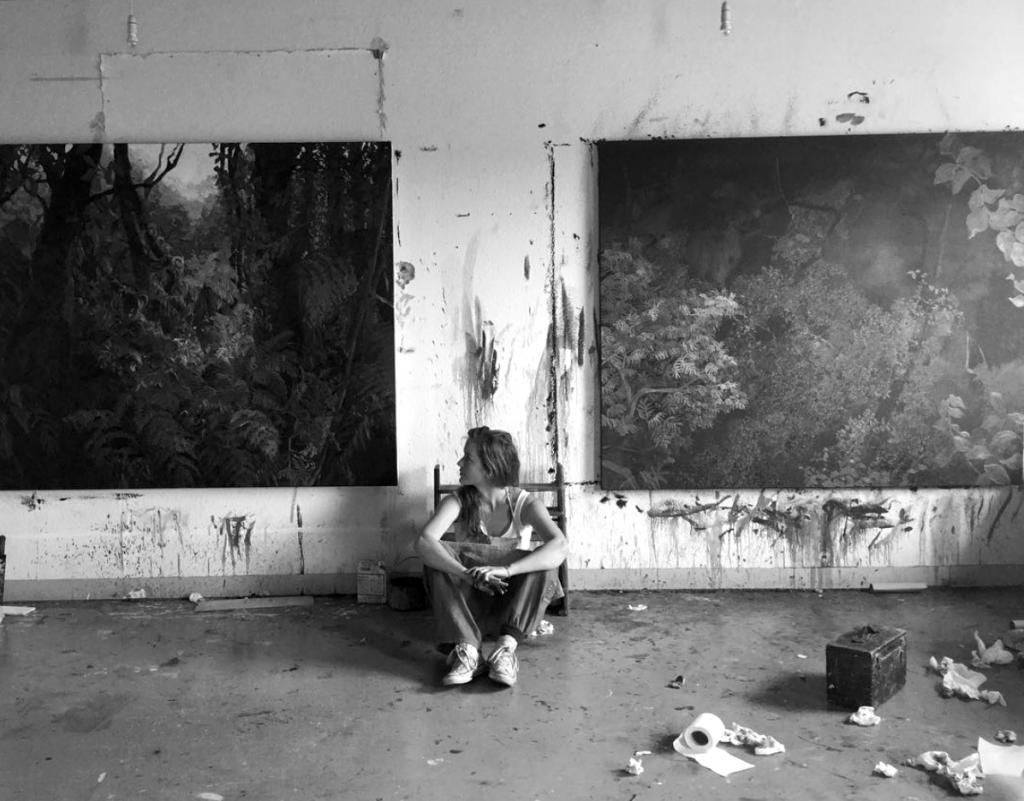 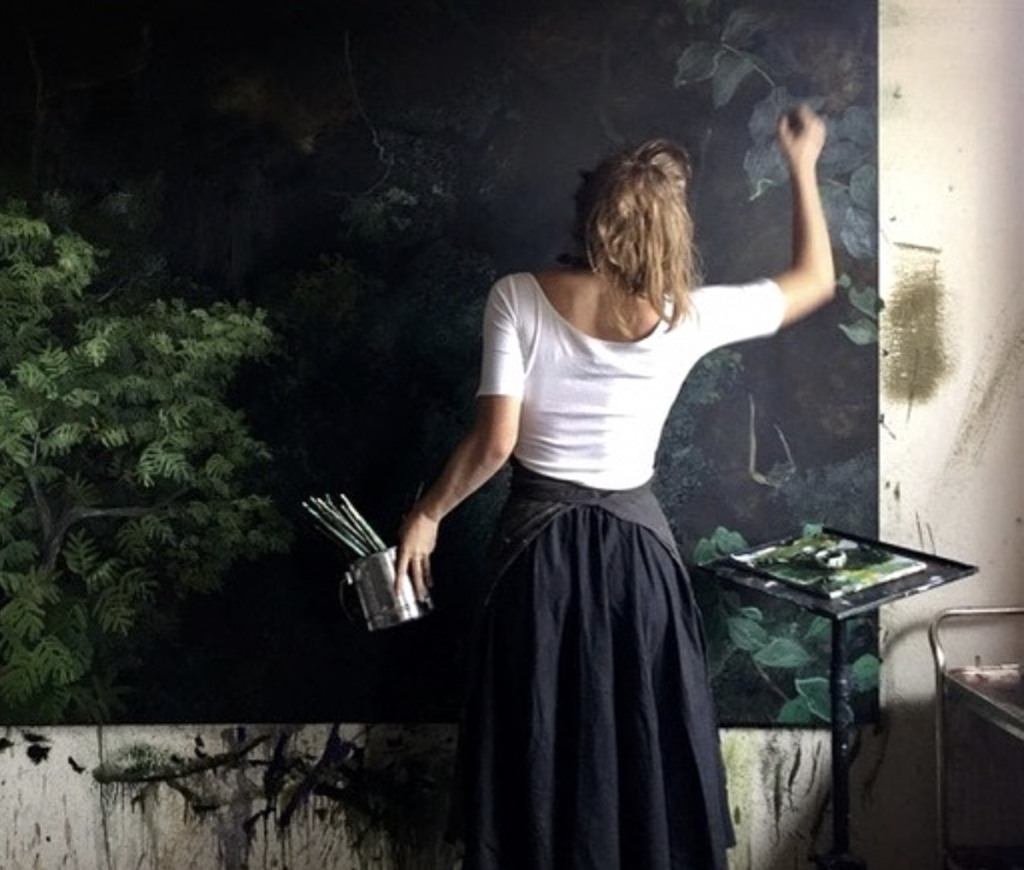 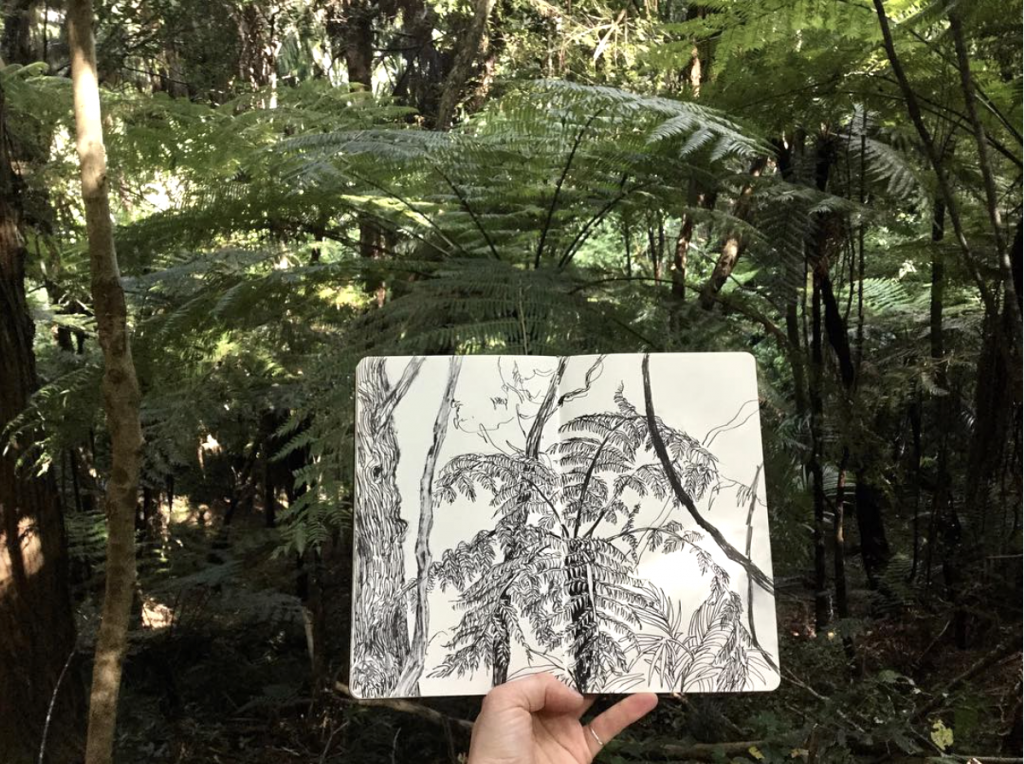 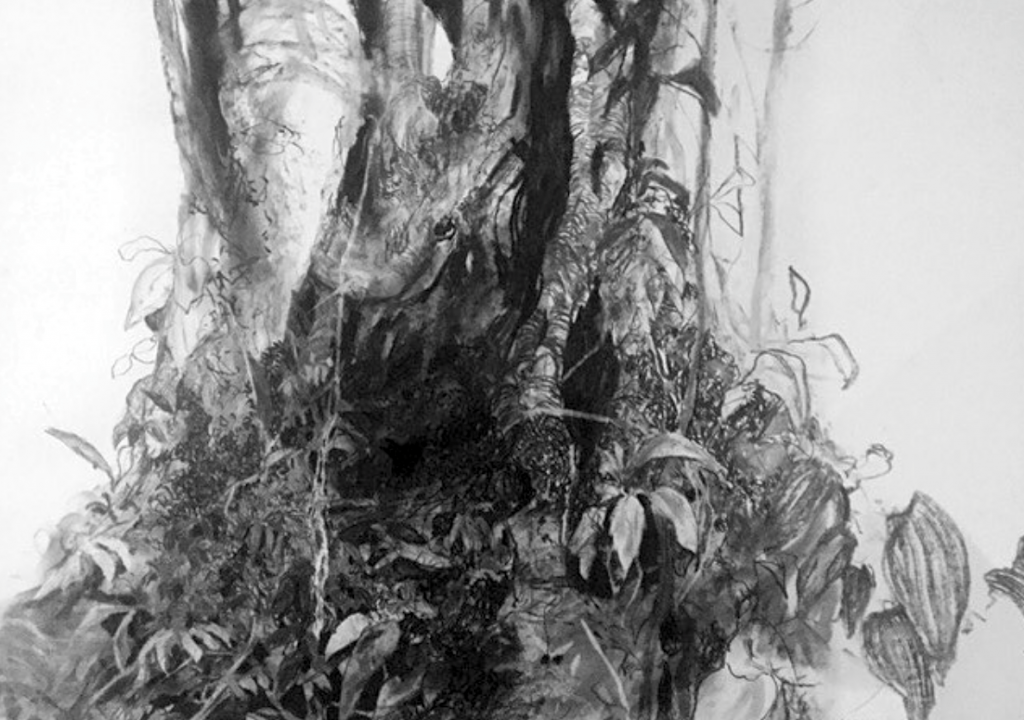 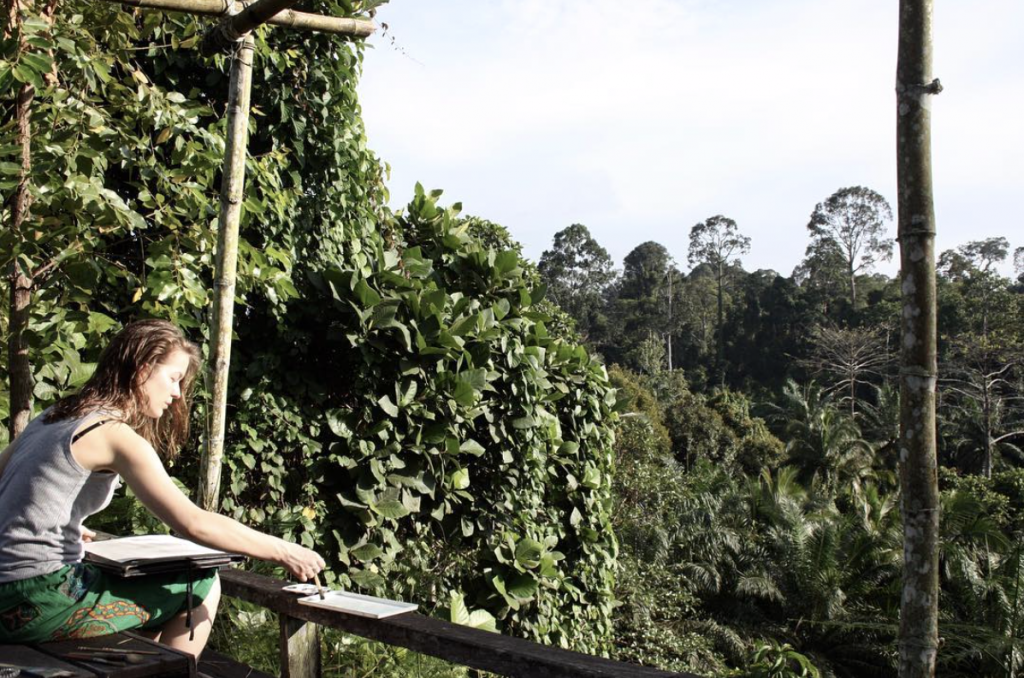 Painting the treetops in Borneo 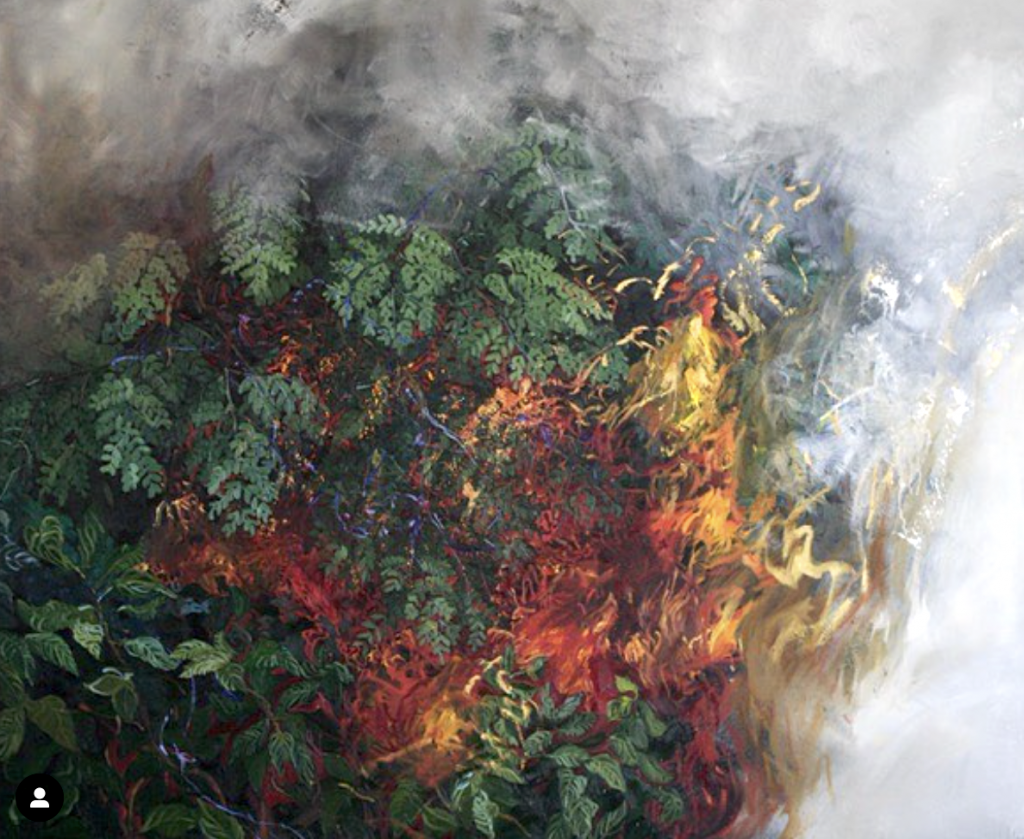 The loss of forests worldwide is one of the main causes of rising carbon emissions, a huge threat to the world’s atmosphere. Data from a global satellite survey showed an area around the size of New York was lost every day in 2017 with this accelerating all the time. Deforestation not only harms the wildlife, plants and indigenous people who live within it but also creates soil erosion, water pollution, air pollution and increases the risk from global warming enormously. Rainforests are the lungs of our planet. 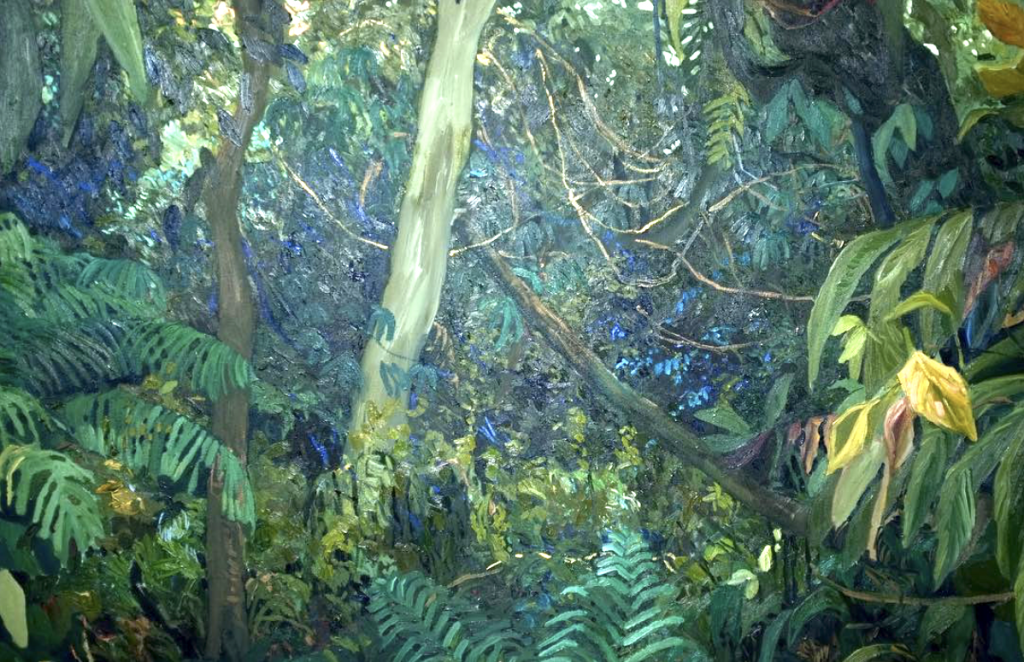 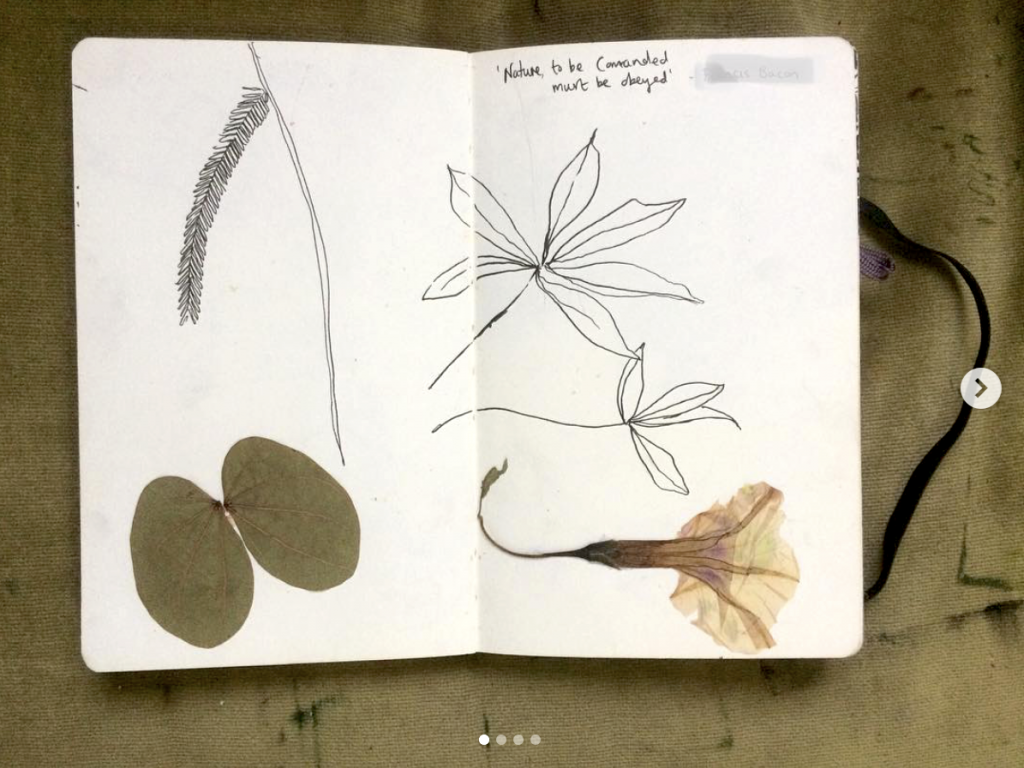 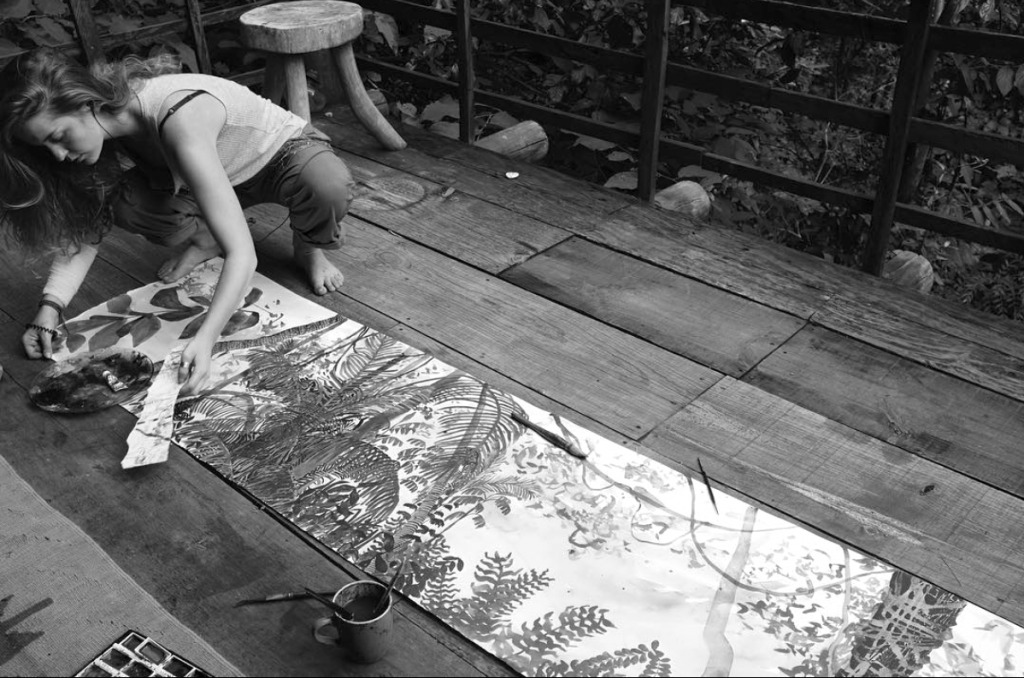 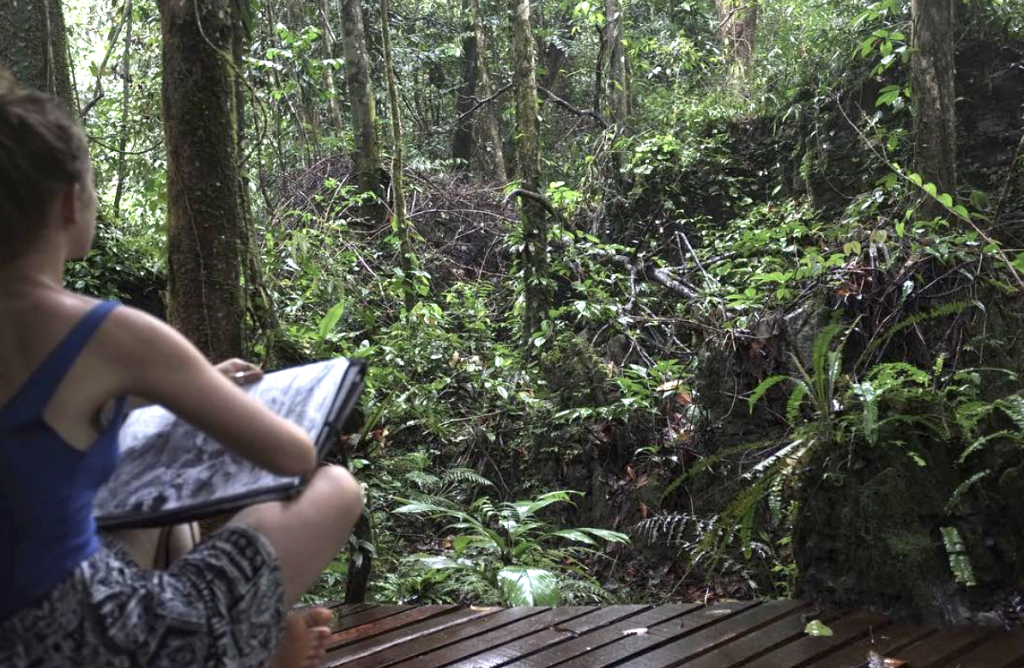 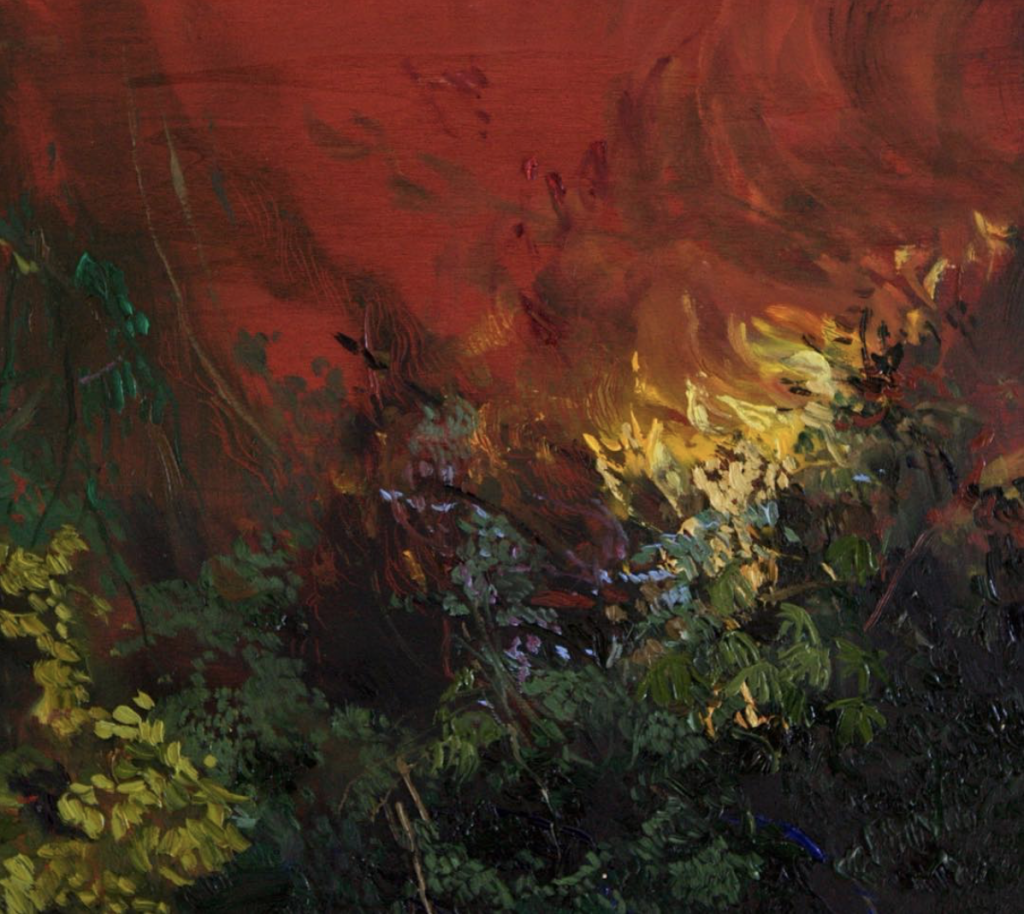 For the last four years I have spent time living and working in rainforests around the world. After my first time living in the jungle I was completely overwhelmed by this incredibly rich landscape: a landscape exploding with life and colour.

The aim of this exhibition is not only to raise awareness of the devastation that is occurring in these crucial parts of the earth, but also to raise money for Reserva Ecológica de Guapiaçu, a charity in Brazil who are replanting trees in the Atlantic Rainforest. The money raised will go directly to purchasing more trees for them to plant.

The rainforests are the lungs of our planet. Not only do they help stabilise the global climate, they provide a home for many endangered species of plants and animals. It is no secret that the rainforests are disappearing at an alarming rate, with an area the size of a football field destroyed every second.

My hope is that this collection of work captures both the vibrancy and lushness of this extraordinary place, as well as its fragility and vulnerability – the face of the earth consumed by flames and left a desert.