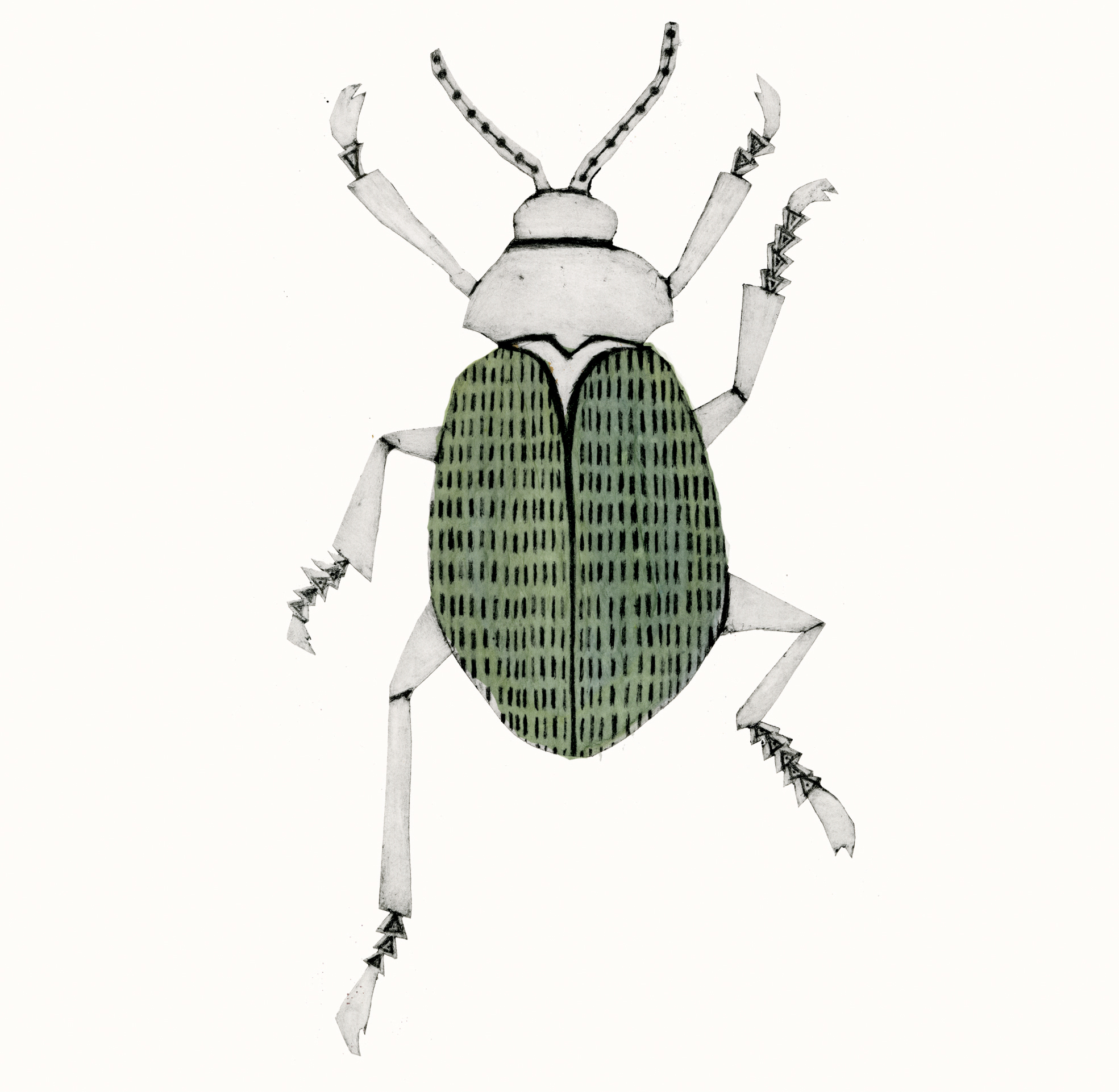 Two new prints just arrived from Beatrice Forshall, both drypoints printed from multiple plates in small editions and hand-coloured, which means they’re short-lived and not designed for mass production. It’s a form that suits the content, since these are images of endangered species. This tansy beetle is just a detail; for the complete picture, and Bea’s thoughts on the subject, please see below.

The tansy beetle is endangered across its worldwide range. In Britain, it is now only found in York, along a 30 km stretch of the banks of the river Ouse. Tansy beetles live off tansy plants. Livestock grazing and shading by Himalayan balsam have led to tansy plant clumps disappearing, isolating beetle populations so that they can no longer reach one another. We can help with the beetle’s survival, by growing its food plant in clusters.

The white-clawed crayfish is the UK’s only native crayfish species. It is one of our largest freshwater invertebrates and it grows up to 12 cm long. They are nocturnal creatures and aren’t very active during the winter, which means that this secretive invertebrate is rarely seen. White-clawed crayfish are found in rivers, streams, lakes and other aquatic areas across much of England, Wales and Northern Ireland. Crayfish need water that contains minerals to build their body armour (shell) just in the same way as we need calcium to grow teeth and nails. They can also live in large ponds and canals, and even drainage ditches but they generally prefer areas with clean mineral-rich water and overhanging banks and plants. They usually have their first young when they are 3 years old. They are very attentive mothers with females carrying their eggs for 9 months until they hatch and even after they have hatched the young hitch-hike on their mothers for a further 2 weeks. Since the 1970s there has been more than a 50% decline, due to loss in habitat and competition by non-native, invasive crayfish species.

The freshwater pearl mussel is one of the longest-living invertebrates in existence, capable of living for up to 200 years. It has a complex lifecycle and, in its first year, it harmlessly lives on the gills of young salmon or trout. Its place in our history comes from the fact that it very occasionally bears a pearl. Its earliest reference in Britain is by Julius Caesar’s biographer, Suetonius, who stated that Caesar’s admiration of pearls was a reason for the first Roman invasion in 55BC. In Scotland, the earliest reference dates back to the 12th Century when Alexander I, King of Scots was said to have the best pearl collection of any man living. The medieval poem ‘The Parl’ which dates from the late 14th Century is another early reference to freshwater pearl mussels in Scotland. As a filter feeder, the freshwater pearl mussel plays an important part in our ecosystem and is extremely vulnerable to water pollution and river engineering works. It is one of the world’s most critically endangered molluscs and Scotland contains one of its most important remaining populations.

See more by Beatrice Forshall at The Rowley Gallery.