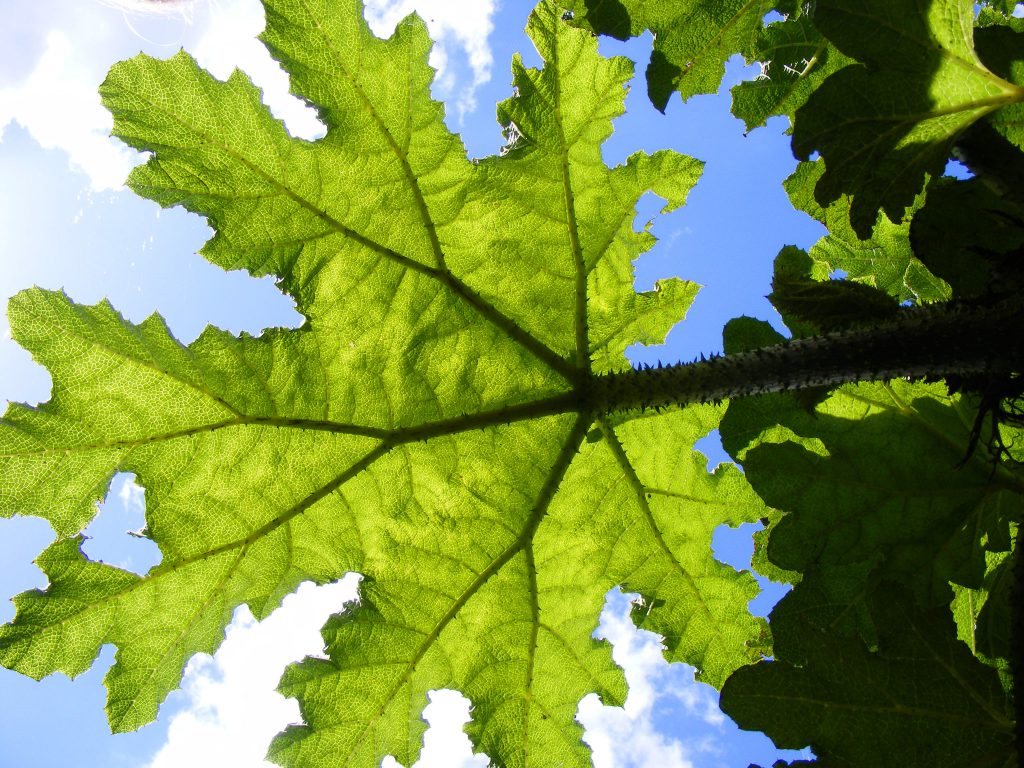 I have three of Gunnera tinctoria. It’s the little brother of Gunnera manicata (those huge waterside plants you can stand underneath at posh gardens) – but it’s still plenty big enough for a small suburban garden with 3ft wide leaves. I used to have only one but repotting gave me the chance to sneak off a couple of sideshoots for propagation. 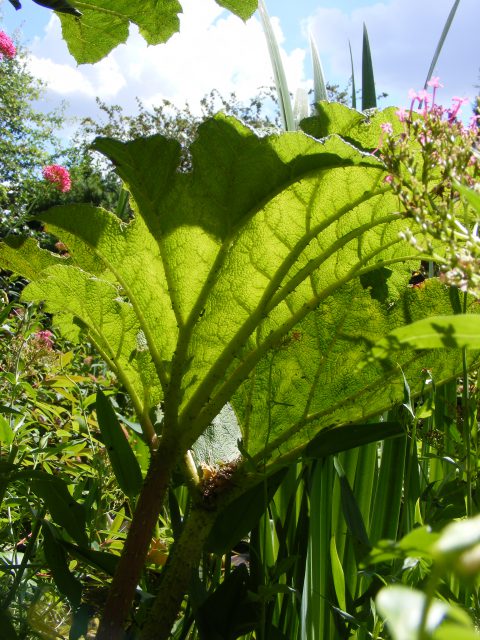 I haven’t dared plant it in the ground as it can be a bit of a thug in the right soil. It is considered a pest in Ireland, where it has become very invasive in the wild. So, my plants live in ever expanding pots, and each require a bucket of water (or two) every day during the summer. 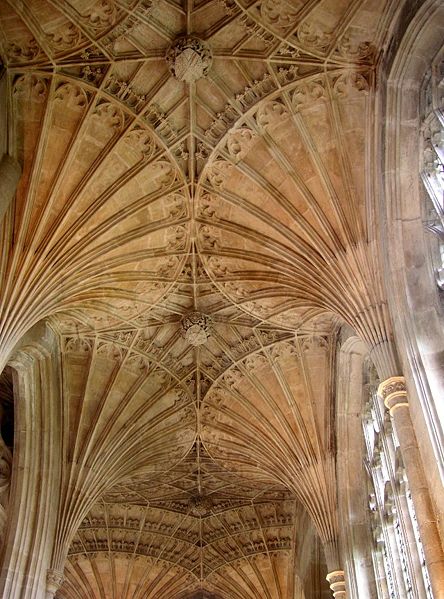 There’s something quite prehistoric about their rough leathery leaves and spiny stems. Their stately structure and venation also reminds me of the fan vaulting seen in Gothic cathedrals, an example of Peterborough cathedral is shown here. I wonder if ancient architects observed plant structure and incorporated the principals into their own building designs? 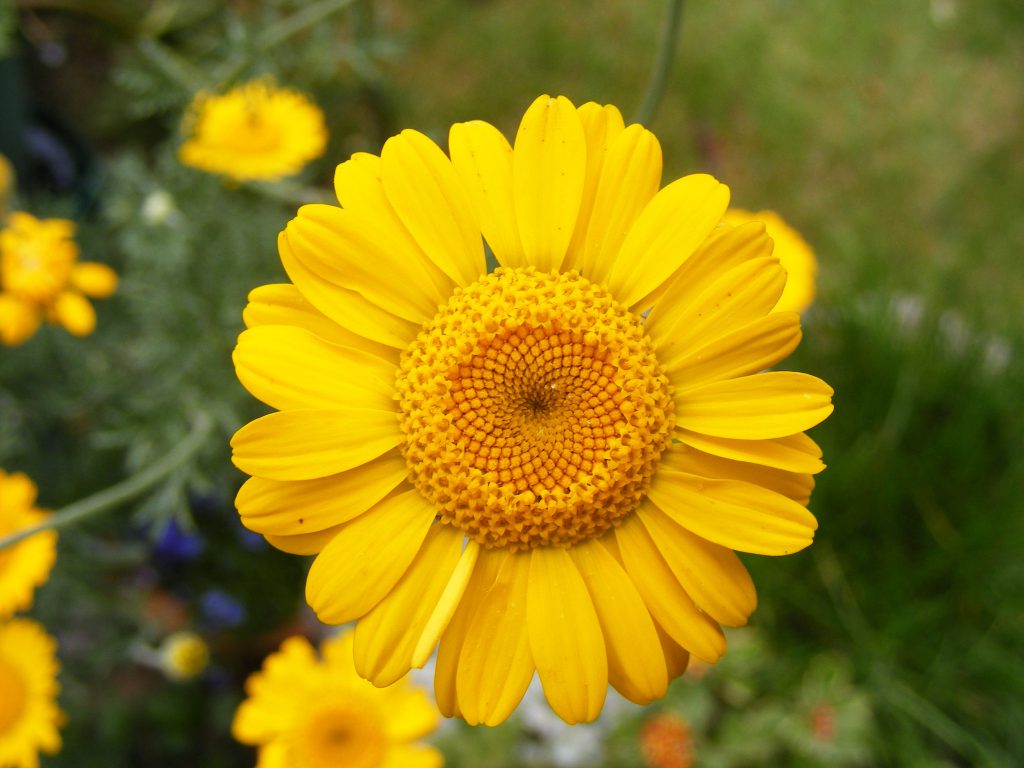 Has anyone still got their Spirograph machine? I love the geometry of flowers – the patterns that can be discerned in the florets and the arrangement of petals and leaves – it’s all quite mathematical. I googled ‘geometry’ and ‘flowers’ to see if it was a recognized phenomenon – lo and behold – the oracle revealed The Hidden Geometry of Flowers by Keith Critchlow. Sounds like a wonderful book – it will go on my ‘to buy’ list. 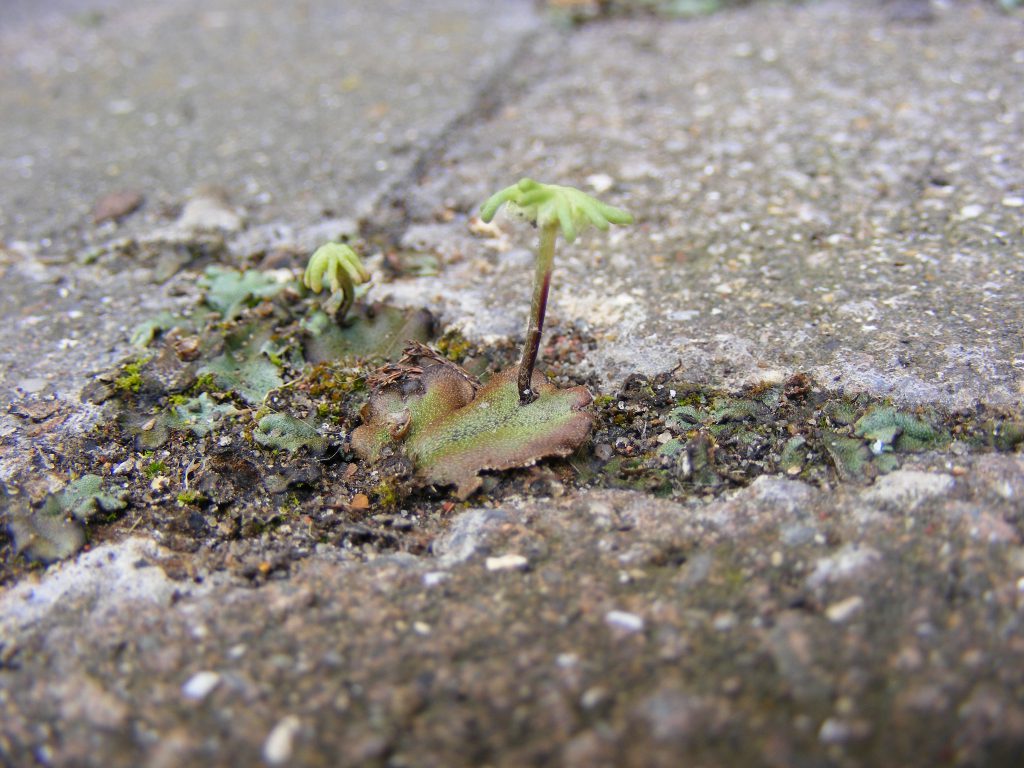 I found this tiny liverwort (1cm) growing between the paving on the driveway whilst weeding. I felt it was in need of a holiday so I put it on a desert island. 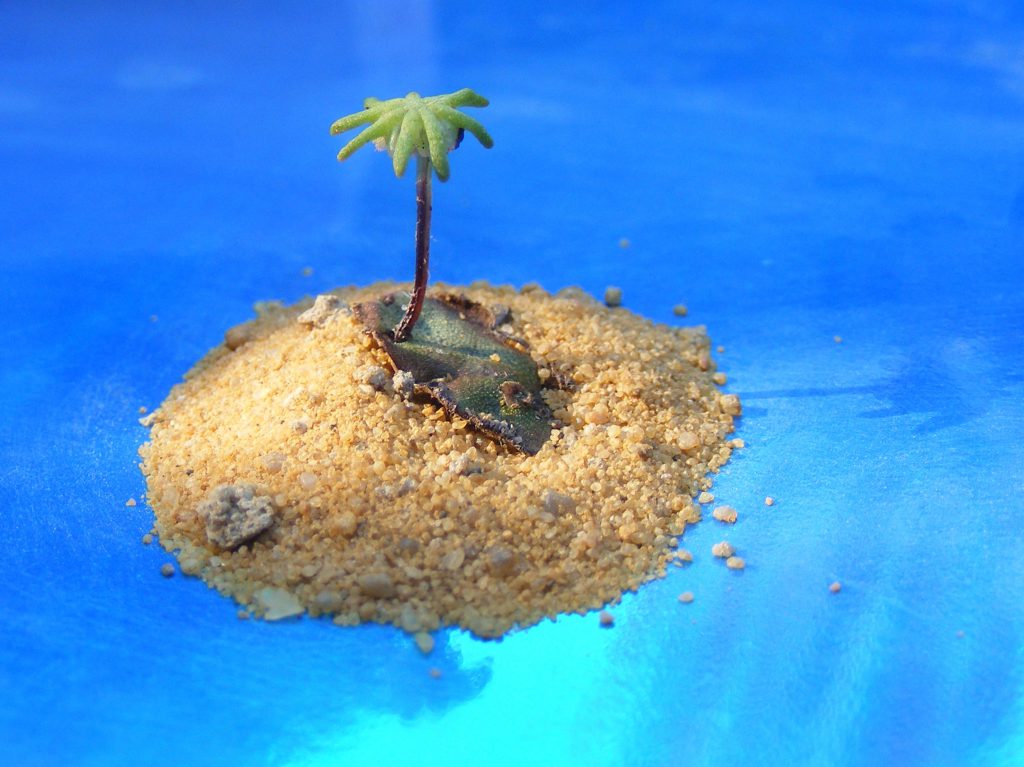 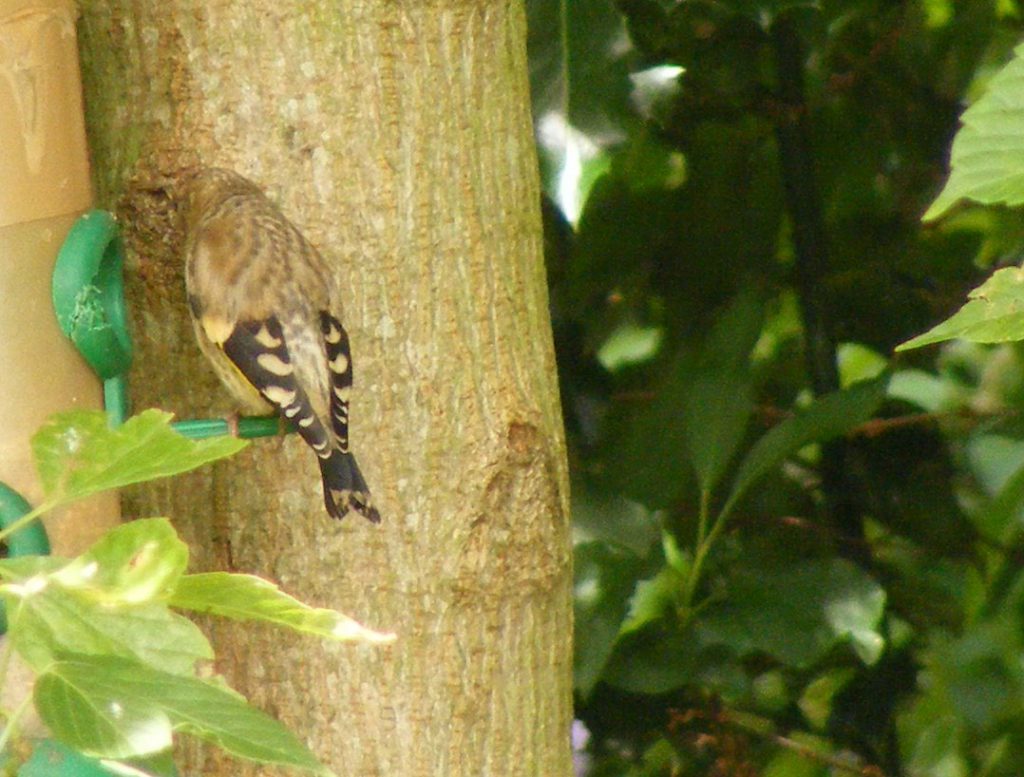 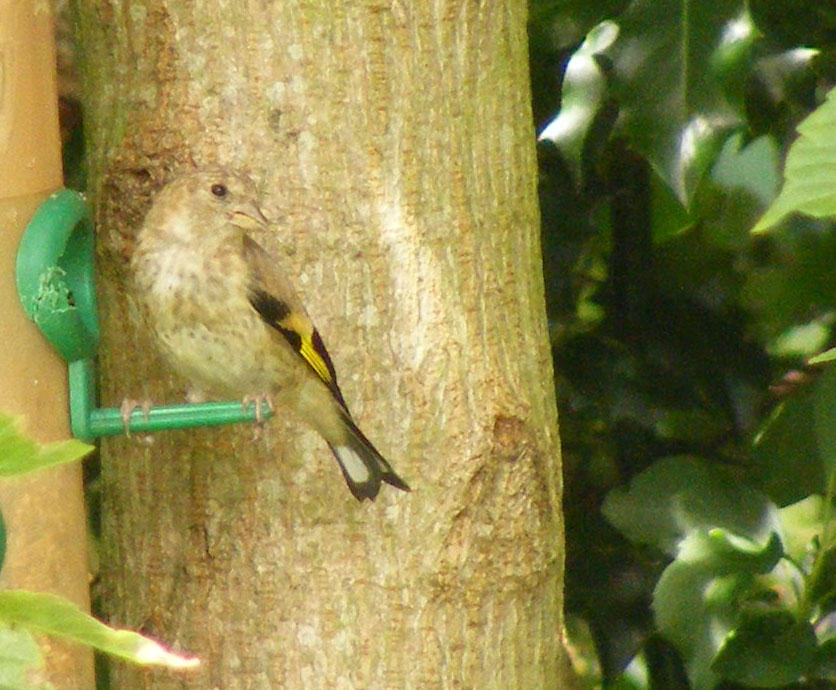 Juvenile birds are more visible in the garden now as they become more confident. A young goldfinch on the birdfeeder still wears its juvenile feathers – a mottled brown that blends in perfectly with the tree trunk. Its smart black tail coat with rows of shiny buttons is just beginning to emerge along its back. 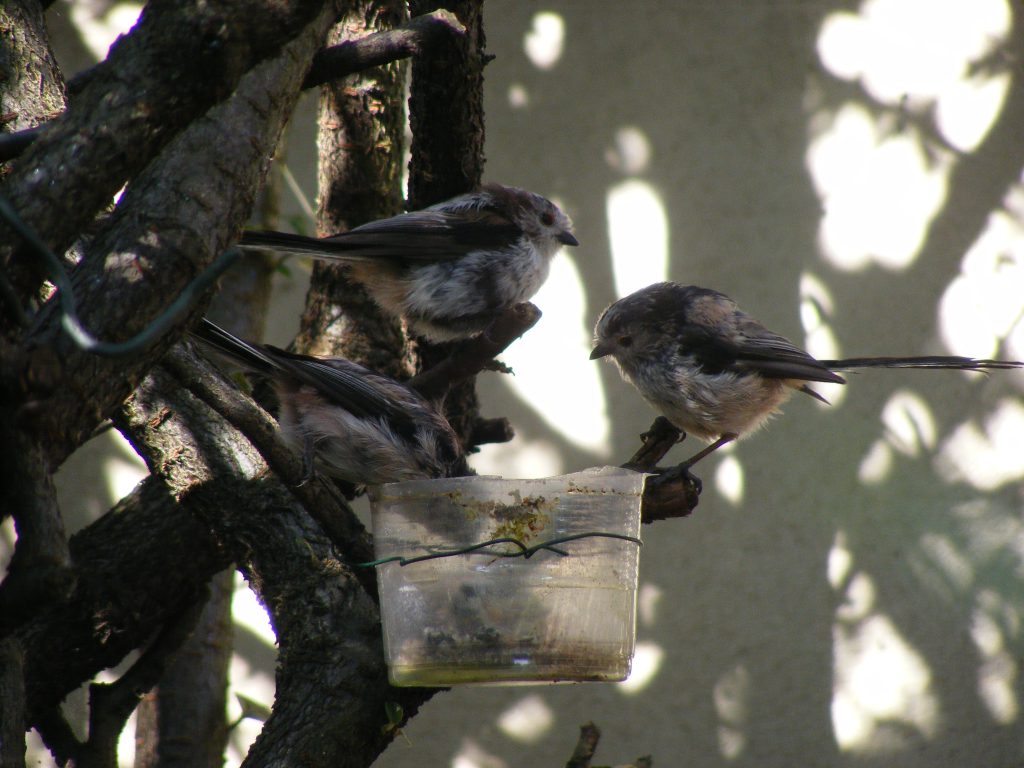 I was lucky enough to be in the right place at the right time (with my camera) to witness a group of about 8-10 young long-tailed tits descend into the cotoneaster about ten feet away. They spent much time within the dense branches preening, feeding and chattering together. These fluffy little flying balls are incredibly cute and are happily more numerous now than they were 20 years ago, especially in urban areas. I have even heard their distinctive calls around the back of the Rowley Gallery, so there must be a colony of them residing somewhere near – probably Holland Park. 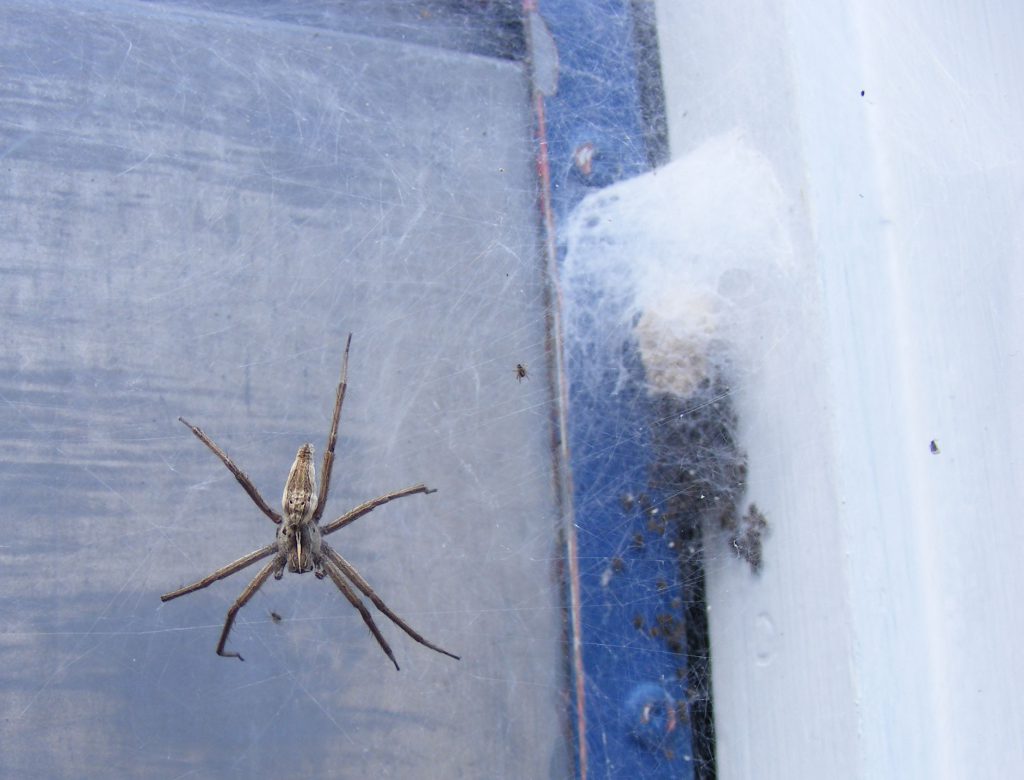 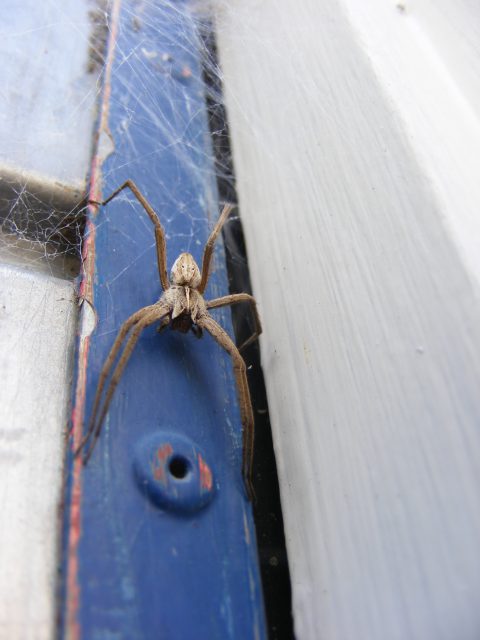 This magnificent female spider (Pisaura mirabilis) chose to site her egg sac on our garage door, from which hatched dozens of tiny spiderlings. A strange choice of location, given that they normally live amongst herbage and tall grasses. She was there for a few days, then all of a sudden disappeared, leaving her clutch behind her. Quite possibly a hungry bird caught sight of her in this exposed spot and made a meal of her. The spiderlings dispersed soon after; I hope they’ll eventually be more astute than their mother when they come to raising their own offspring. 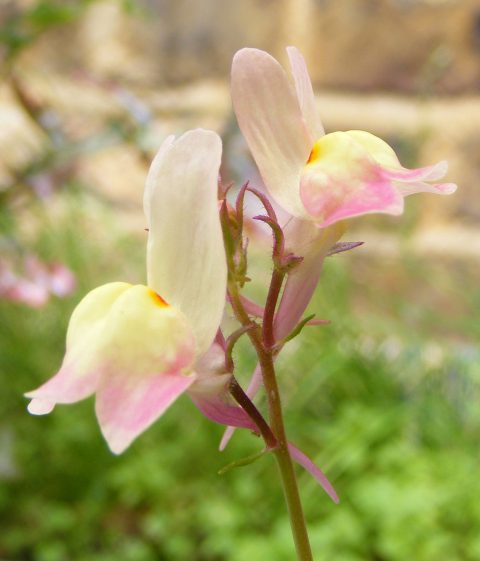 Chris at the Gallery received a greetings card from Annabel Keatley, an artist residing in Spain, made of handmade paper. Within its fibres wildflower seeds from southern Europe were enrobed. Chris duly planted the card in a pot outside his workshop, and waited with great anticipation for any sign of life. One morning he was rewarded with three very delicate little flowers waving about atop a spindly stem. After a bit of research we identified it as Moroccan toadflax. 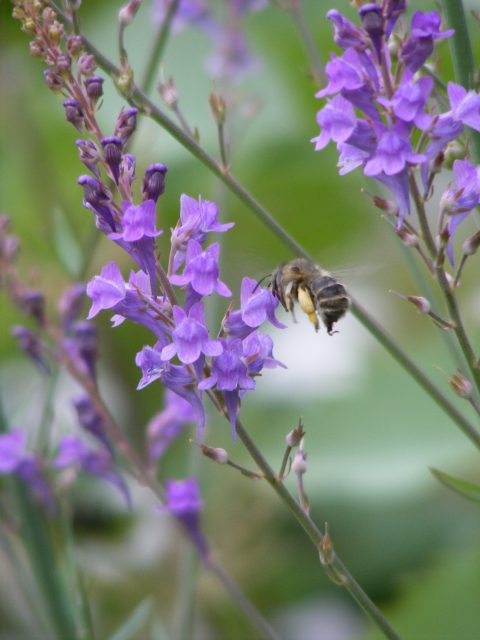 And here is the more common purple form. And for the Common toadflax see last year’s July post. 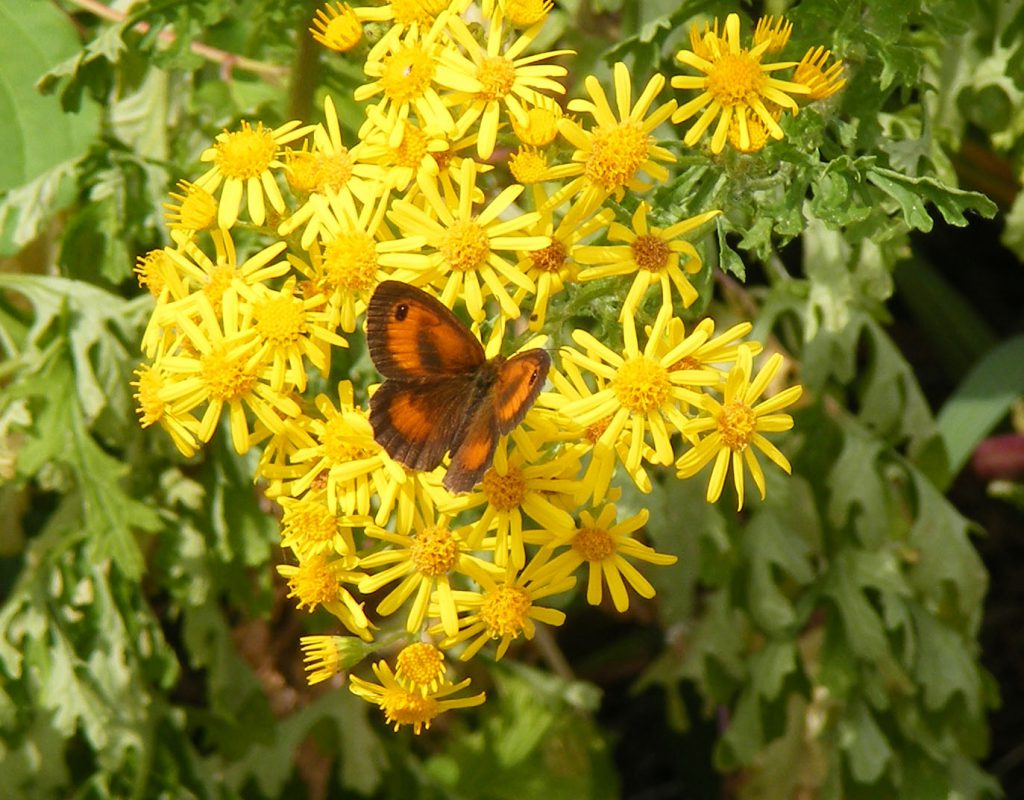 The wildflower ragwort can be quite a majestic sight if grown in isolation. Unhampered by surrounding grasses as is usual in the wild it can grow to over 5 feet tall with huge sprays of dazzling yellow flowers. It is a biennial (it grows for a year before flowering the next) and tends to sow itself in the most inconvenient places possible. As it doesn’t transplant very well I have to make do with it flowering where it wants to. I suppose I shouldn’t be letting it live at all as The Weeds Act 1959 “requires landowners to take steps to prevent the weeds from spreading”, as it is poisonous to cattle and horses. Well, we don’t have cows or horses anywhere nearby so I think I’m safe for the time being.

It is normally clothed in cinnabar moth caterpillars – bright yellow and black stripy wigglers, though I haven’t had any this year so far. Here instead a Gatekeeper butterfly is enjoying its nectar. 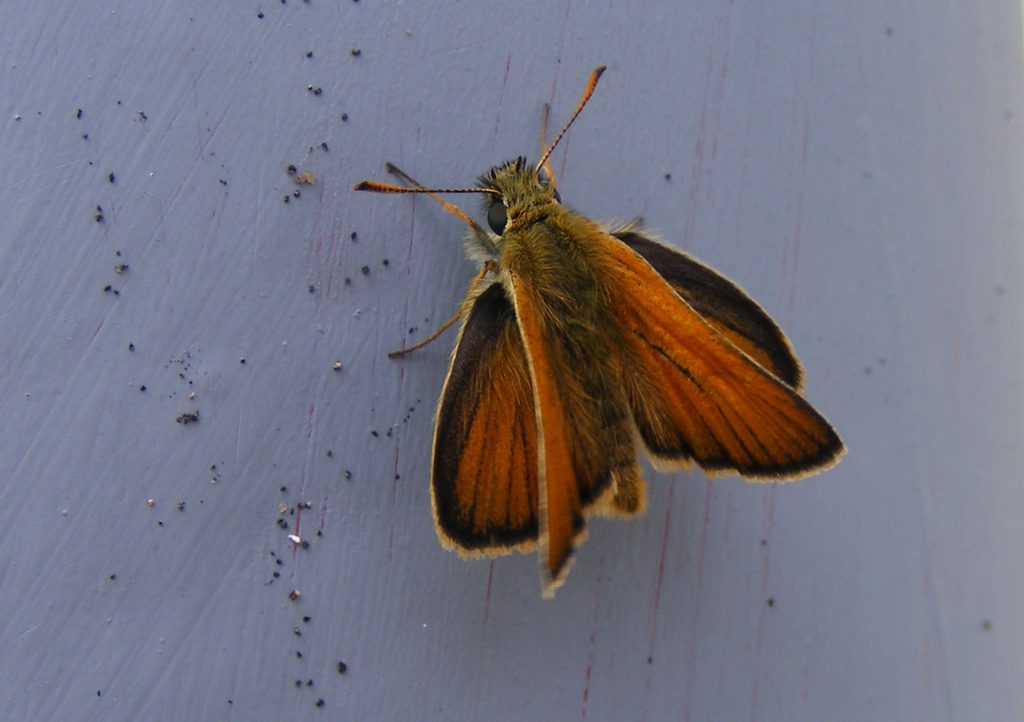 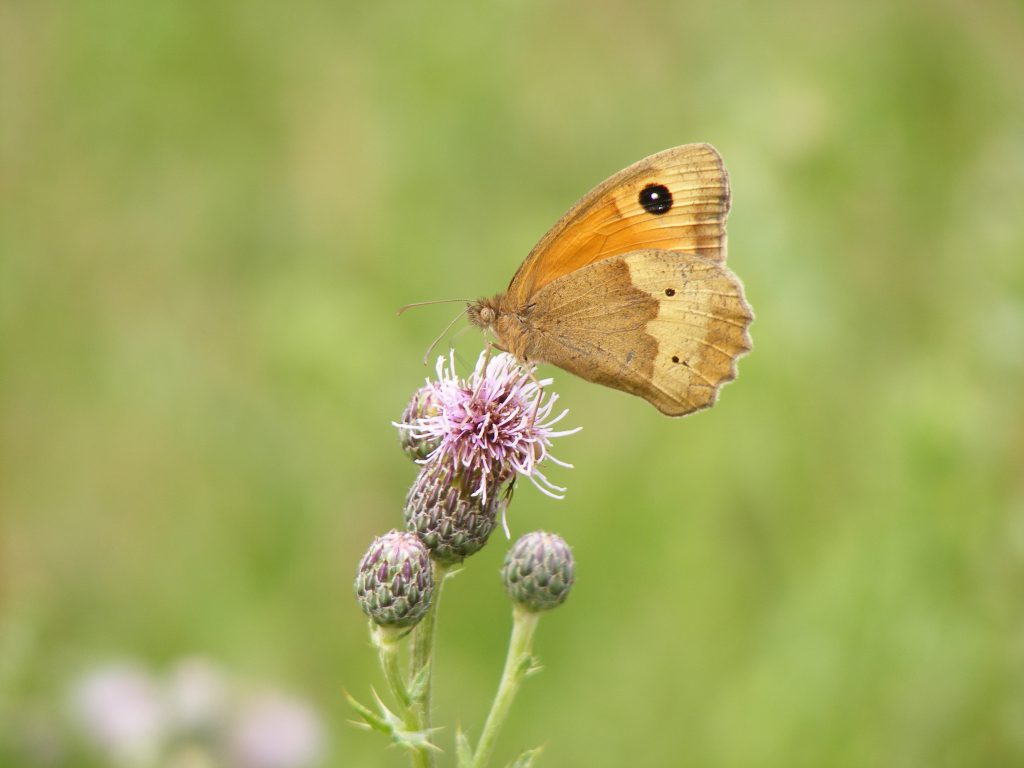 A Small Skipper butterfly on the side of the house. I live about 50 yards away from the local park, where there’s an area of long grassland and thistles. This habitat is a perfect one for the skipper and meadow brown butterflies’ caterpillars, and every year about now they emerge to dance and bob above the flowerheads in great numbers. The Essex Skipper, a local variant, can be distinguished by the black tipped antenna. 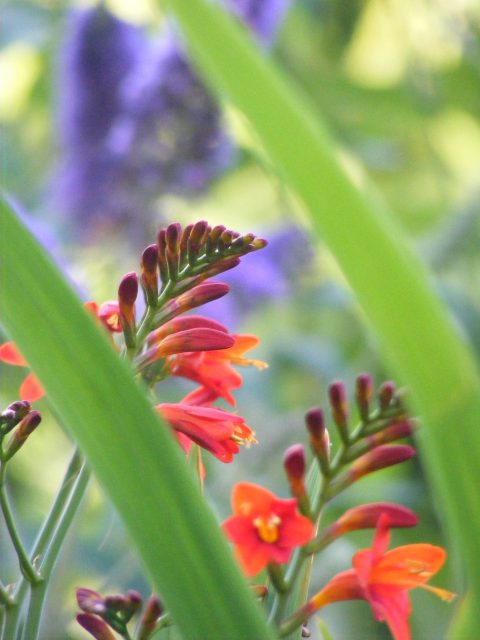 Crocosmia ‘Lucifer’ has just emerged, with purple Buddleia in the background supplying an unlikely but lovely colour combination. I’d like to take the credit for this masterful arrangement but it happened purely by chance, the crocosmias being planted for their bold sword-like leaves and the buddleia – well, the buddleia’s just where it is, a self-seeder that chose its own spot to put down its roots. 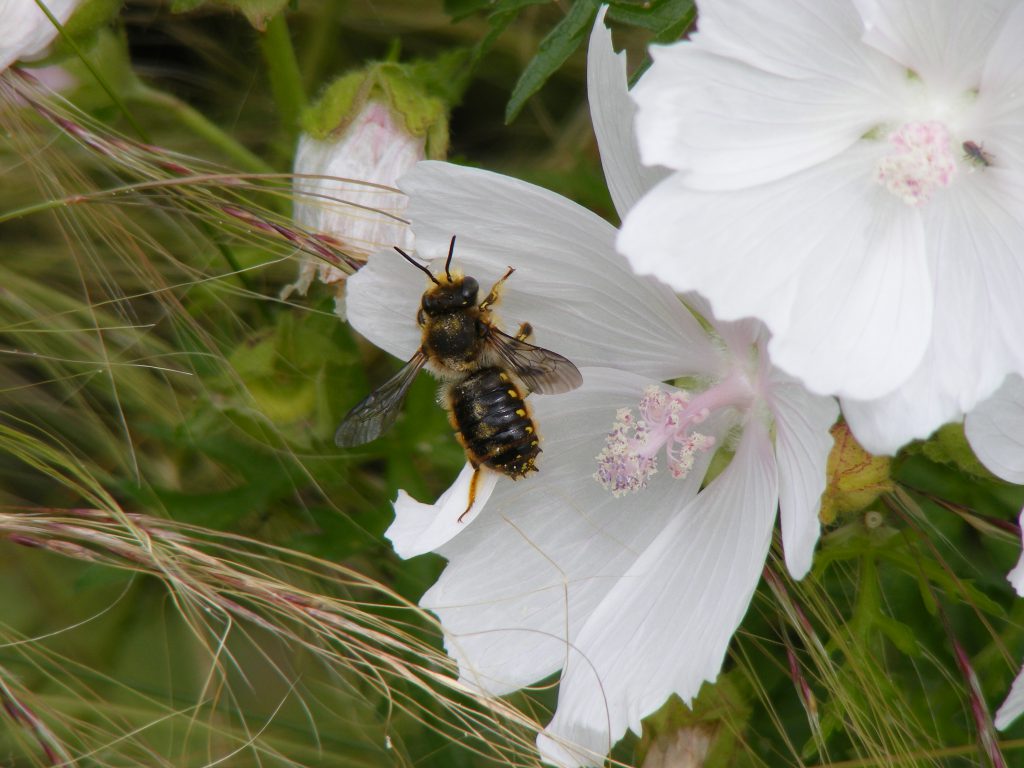 I was doing some delicate weeding one day around a clump of Bunny’s (or Lamb’s) Ears (Stachys Byzantina) – you know, that grey fluffy-leaved plant that demands stroking and gets small children interested in plants. On hands and knees, I detected the sound of munching – like the slow, deliberate chewing of a stick of celery. I followed the sound with my ears to a part of the plant and discovered one of these bees on the underside of a leaf, delicately shaving off patches of fluff off the leaf and storing it in a woolly bundle under its thorax. I later discovered it was a Wool Carder Bee and it uses the ‘wool’ to line its nest, which can be a cavity in a wall or a hollow plant stem. The males are (unusually) larger than the females and will aggressively guard their patch of Bunny’s Ears against any other insect that comes near it. 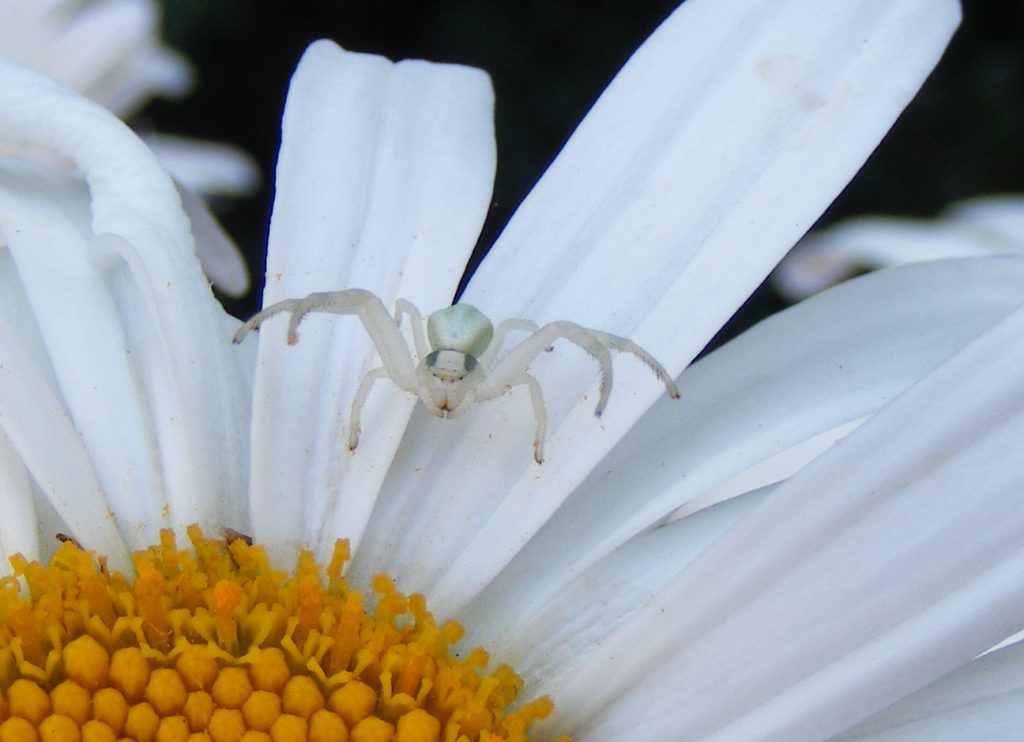 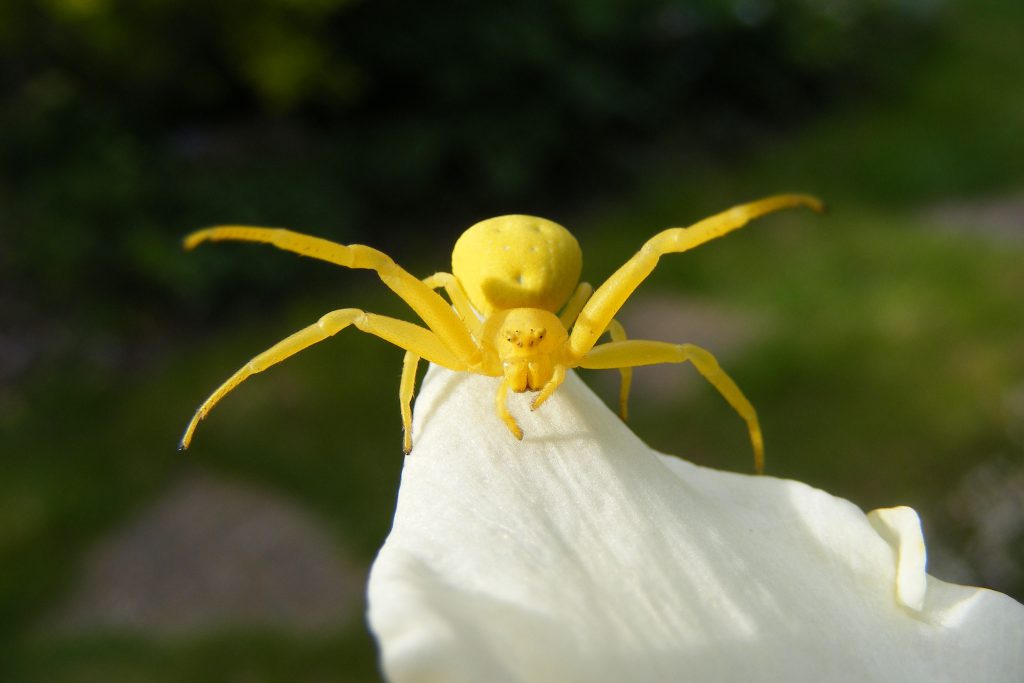 I see this variety of spider every summer (Misumena vatia) waiting in search of prey on or underneath a flower head. The females can be either white or yellow, and can change their colour to best suit the flower they are resting on. They perch quite visibly on the top of the flower with their front two pairs of legs stretched wide, ready to snatch a hapless insect that gets too close. The white form I photographed last week, but the yellow one was photographed in 2014, as I haven’t seen one this year yet.

3 thoughts on “A July Garden”