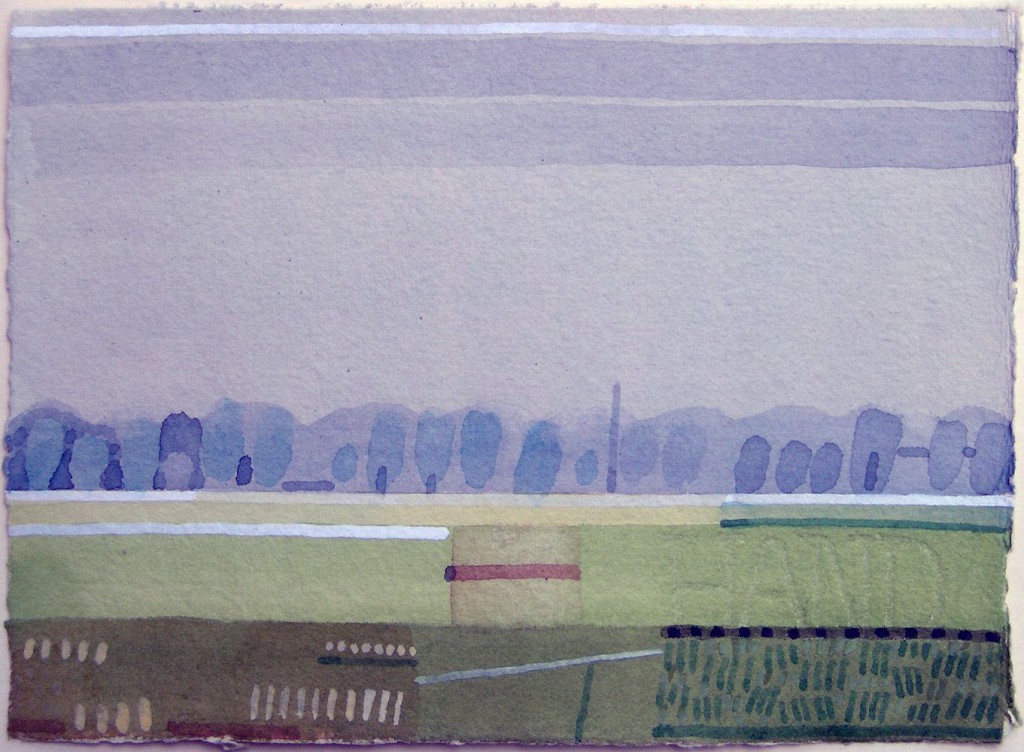 Fog. Snow. Flood. Wind. Rain. We have been through all. It makes outside work difficult if not impossible. Pen clogs with ice. Watercolour freezes and gets spattered with rain. 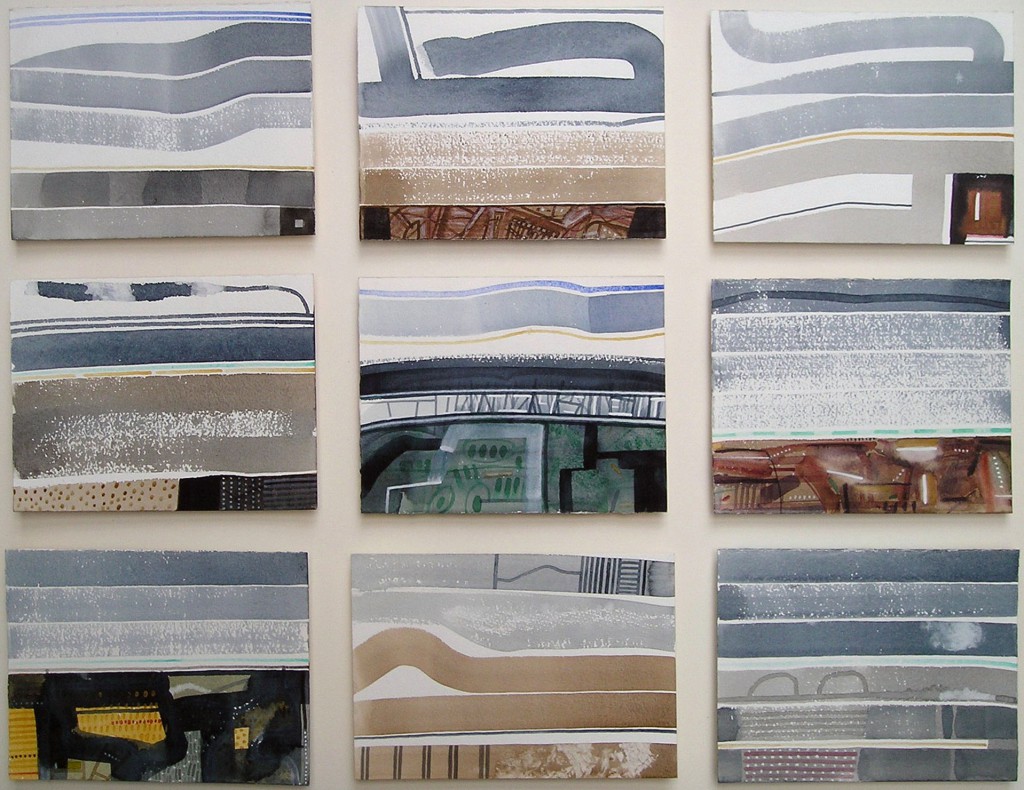 land falls away either side
sketched curves in grey air hollows

a copse catches the rough light
blooms green and umber

way below us flooded Port Meadow
is a clear mirror elongates

reflections of trees on the east bank
tangle with nearside branches

far downriver spring sweeps
and throbs through the bridges 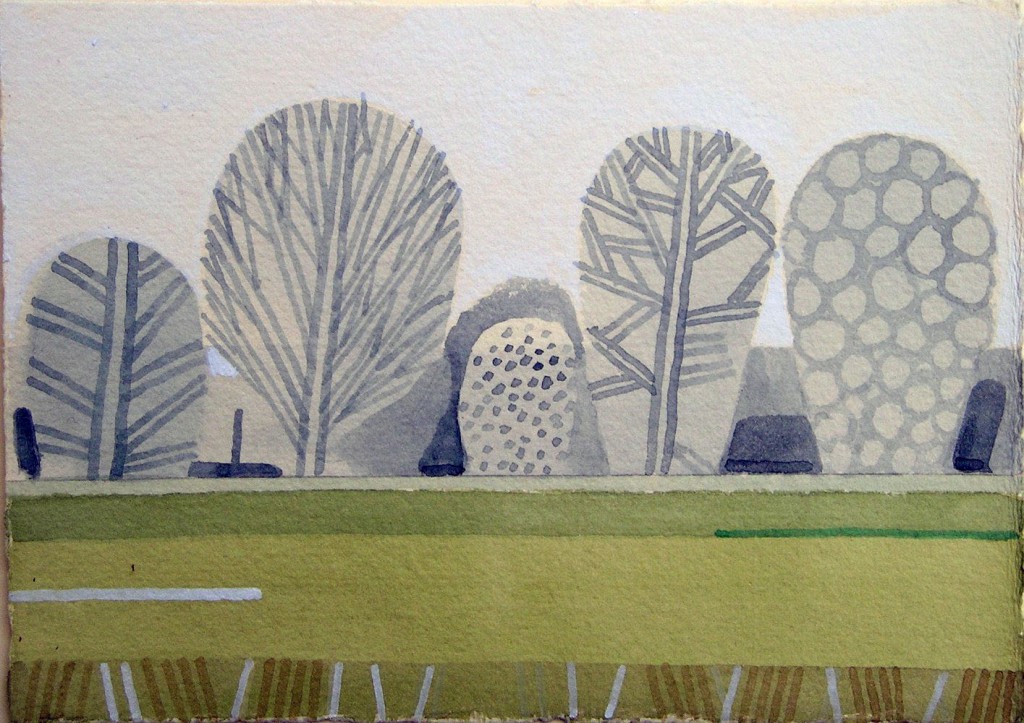 We have been doing our monthly walk. Looking, discussing, making notes. Its not really till April that I find I can return alone and the conditions make painting just possible. 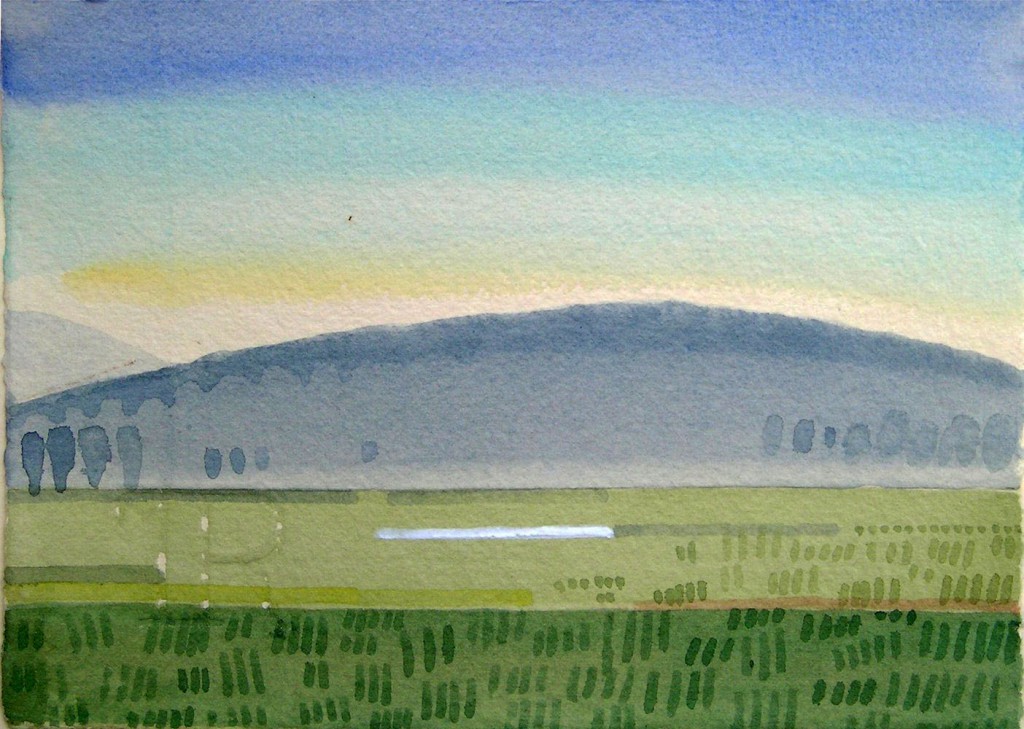 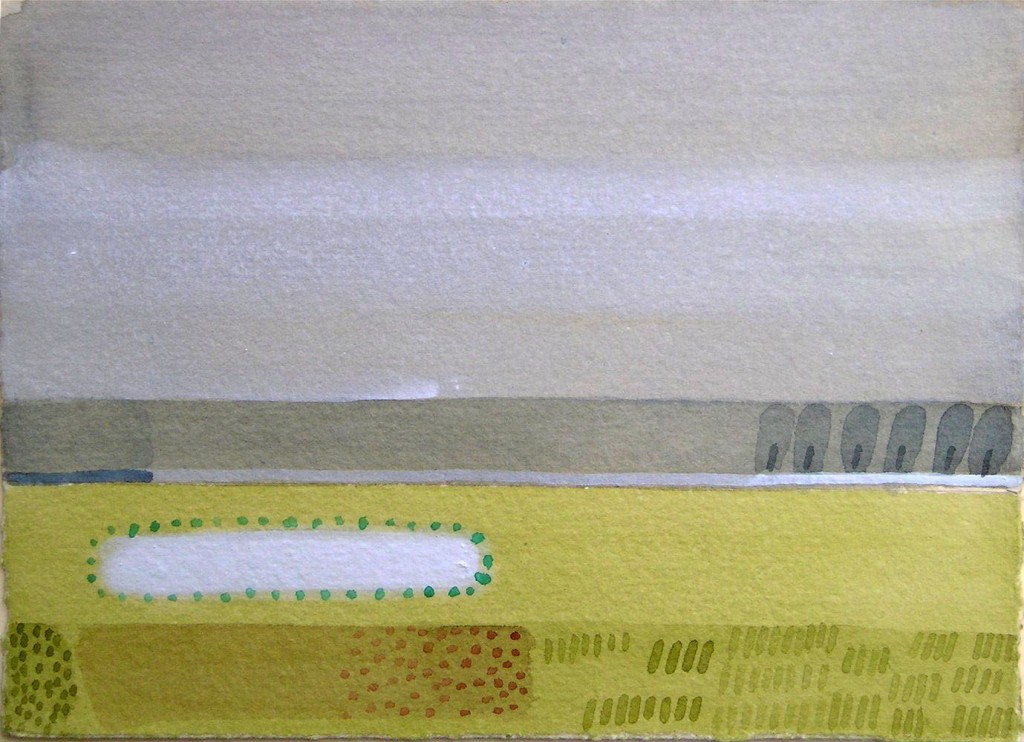 Wind sweeps across the open flood water and soggy grass and mud expanse. Forced to look for shelter I nestle between old pollard willows with a view across the meadow.I make some small loose topographic studies. 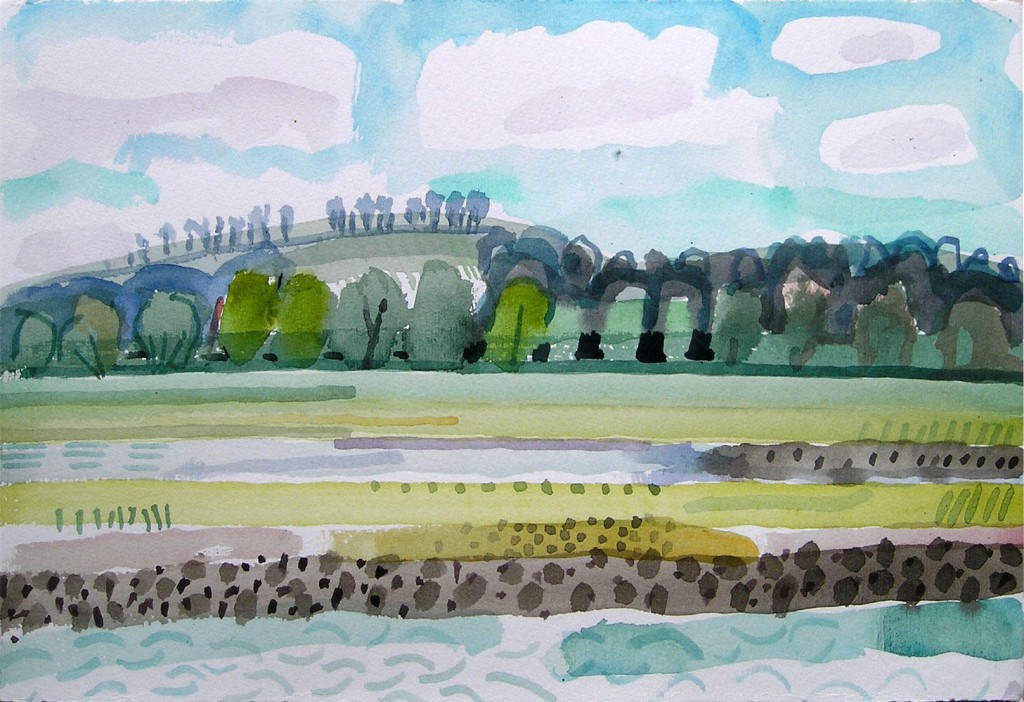 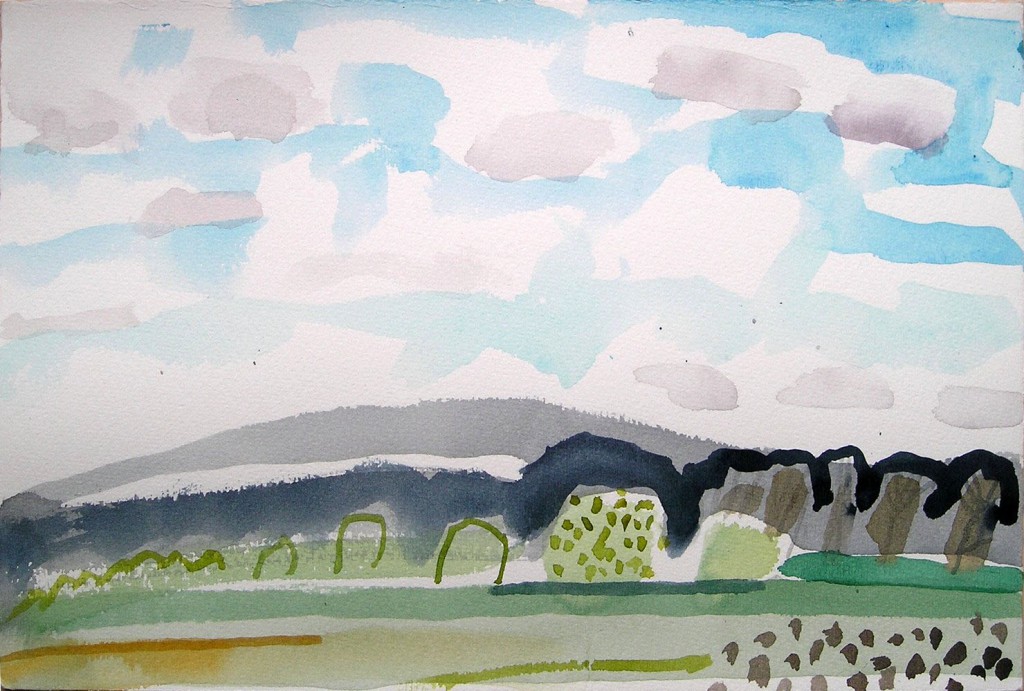 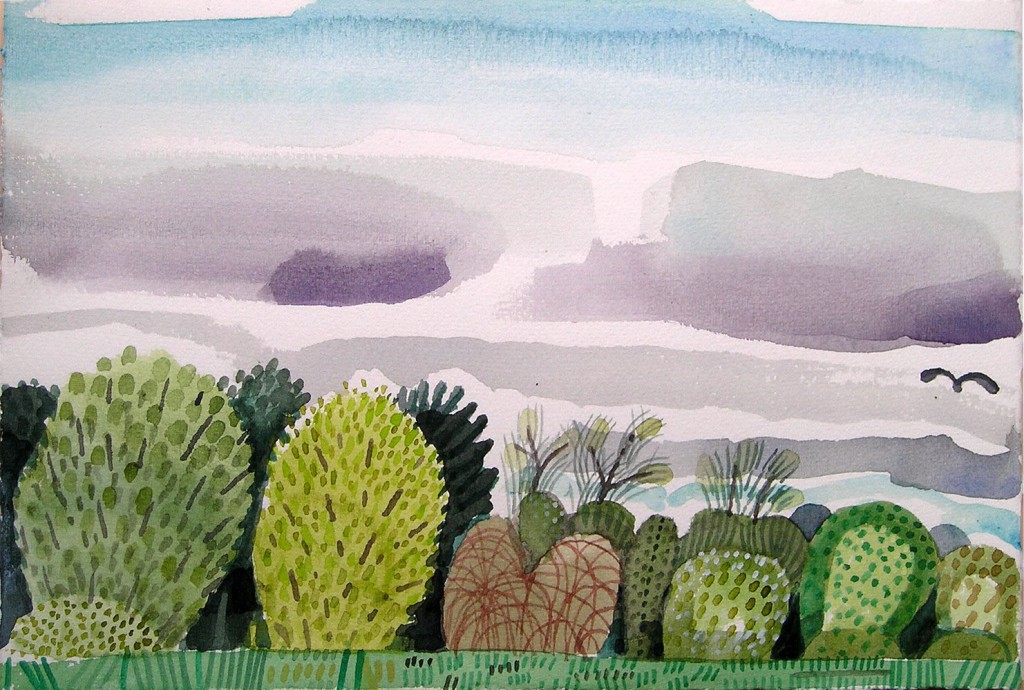 One: narratives, memories, stories, complex reference to the landscape history. 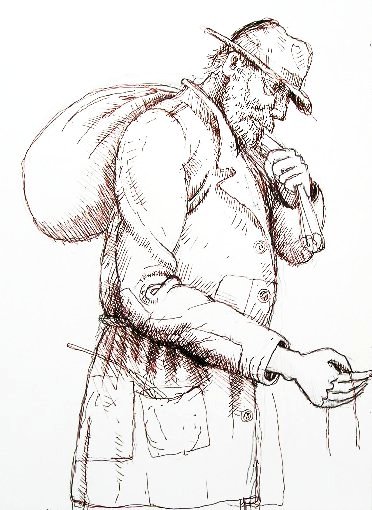 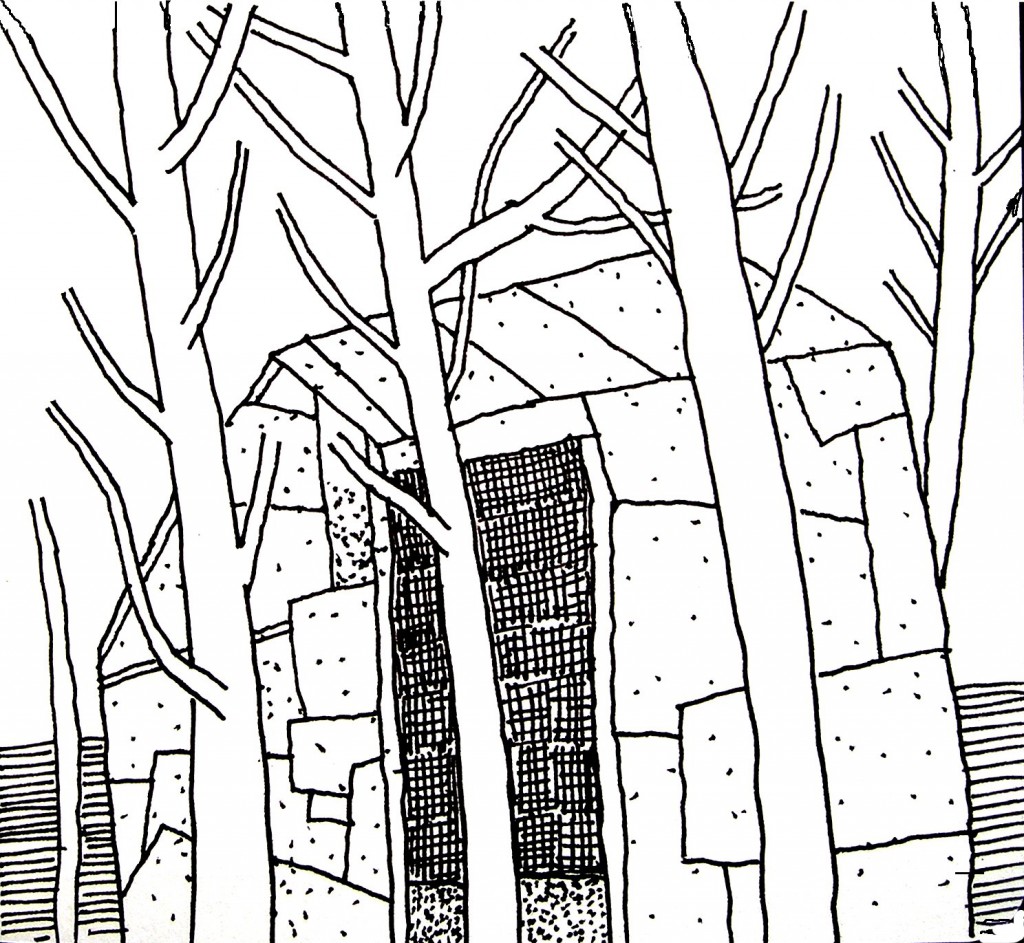 An east wind carries children’s voices
and sound waves from a single bell.
Another stir from no man’s land,
contingent and provisional,

echoes the sense of older lives
between the railway and canal,
past the river and the fore-edge,
enduringly peripheral.

*
A Lithuanian exile,
once a Polish air force hero,
lived next to the city dump,
his hut beside a hedgerow.

He bought his bread at Blencowe’s:
a snooty woman one summer
complained, and was asked to leave
– they said Josef’s a valued customer.

*
One of the regulars at the Perch
was a sad and love-sick soldier.
He came from Black Jack’s Hole, they said:
he’d drowned there long before.

*
One lived in a Trap Grounds shed;
kids called him Mr Mush.
He slept in a wheelbarrow,
had a handlebar moustache.

He was a very small man
but wheeled an enormous bike;
they knew he had a shotgun
so were carefully polite.

*
Winter sunlight brings things closer,
lends us its binoculars,
turns us into wishbone shadows
as though we came here from the past,

as though clear light and sound reorder
echoes that came last and first,
as though the tabs of space were moving
and memory blurs with forecast.

Two: The meadow provides the theme. Initial elements. Jazz sets out from a melody which provides a tool, a compass, a reference point, a gateway from which to enter other places. Sets of watercolour pages assemble to become a kind of improvised landscape. 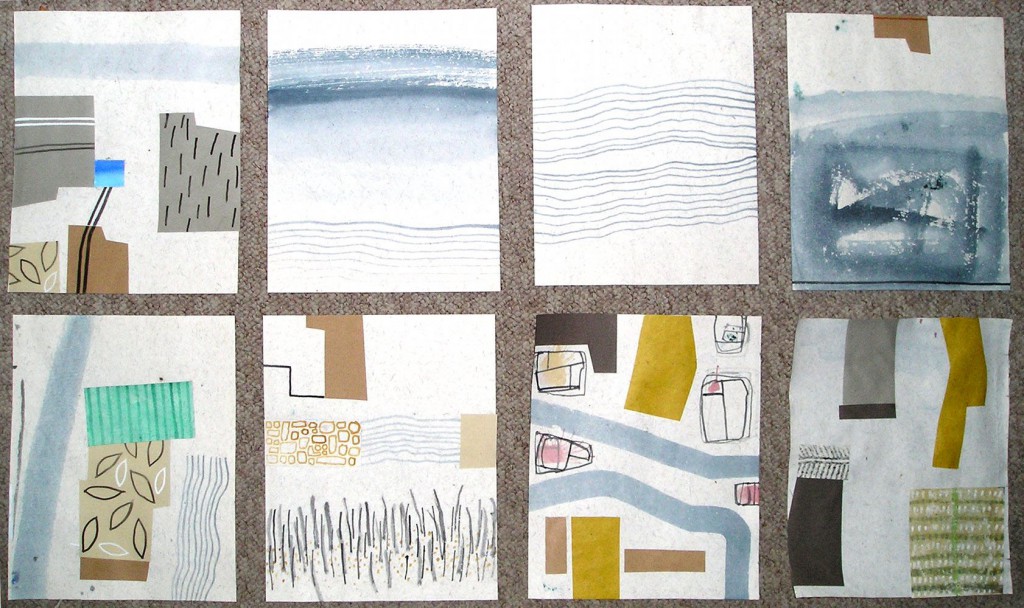 The meadow’s open space offers a place in which to freely play. A source. Milestone. Melody. A landscape in which I observe elements. 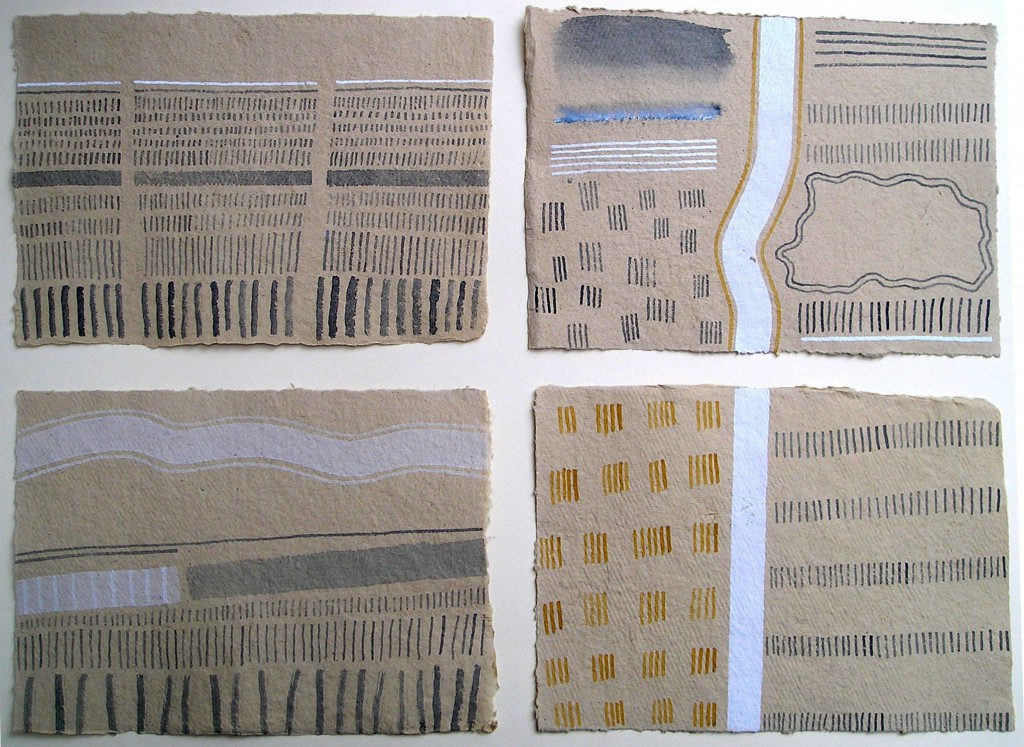 The Meadow’s floods have ebbed and left an archipelago of pools
punctuated by heron interrogating them for trapped fish.
Optimistic swallows swoop and skim for early midges.

What the ground has to say to the fringe of trees on the near horizon
is bordered by a hazed line, binding the sheaf of different greens.
We ponder a name for this crease of light, separating planes;

and whether they could camouflage the brutal student housing blocks
obliterating St Barnabas tower – planning cock up or conspiracy –
with blue to white stripes like ring-road warehouses;

and how Scott’s paintings work: tension of surface and substance,
how still lives of pots on tables become framed landscapes,
morphing from figurative to abstract and back –

weight, balance, and the opposing movement of forms,
slabs of flat colour, a kind of primal mark-making,
and images held by a single curved line.

In Burgess Field an obstreperous yaffle call, a pair of goldfinch,
and jackdaws strut like sailors on shore leave, out of their element.
Animal paths wander off telling their muddy stories. 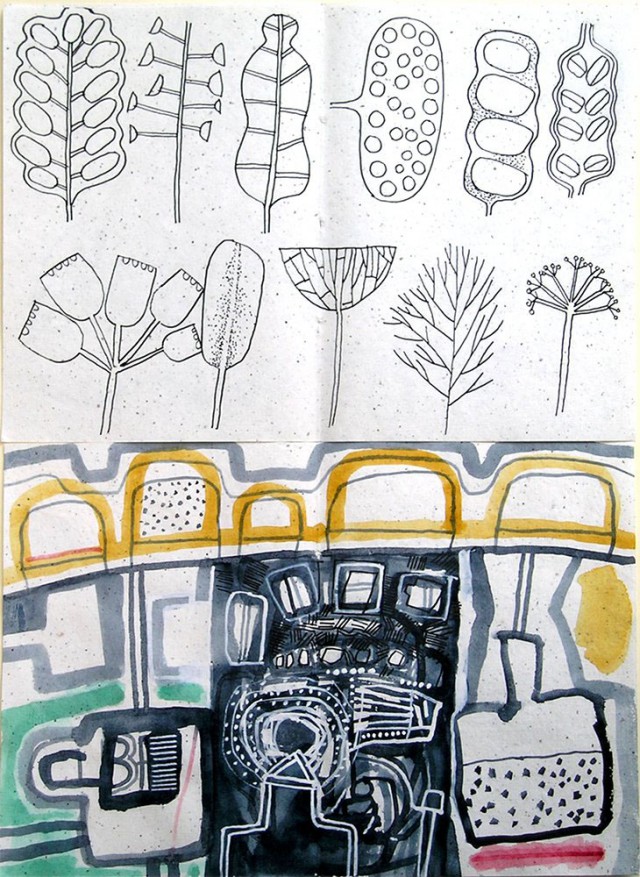 The Museum of Everything

The sites were photographed from the air by the late Major G.W. G. Allen during the summer of 1933, and were located and surveyed on the ground between May, 1940 and September, 1942. The most prominent of them, Round Hill, has long been known as an antiquity.

Drizzle on cowpats and buttercups
Hawthorn froths in the damp

To haunt, to practice habitually
To bring home
The old dump pushes back its material ghosts

During the spring of 1942 a much corroded iron spearhead was picked up in the
centre of this site, which has lately been trampled by cows. It is of a common Anglo-
Saxon type with short lozenge-shaped head and hollow split socket.

Gothic arch of branches over a purple path by the khaki canal
Two old bikes chained together, covered in ivy and brambles
Coarse friable ware characteristic of the local Bronze Age
Thick sherd with backing of crushed grit and tempering of grass or reeds.

A Time Out mug spectacularly paint-spattered
Sign saying LONG TERM
4 slots in an old stone that once held a steel plate
An invisible poet’s cap hanging on a bramble
Number 49
Any conclusions regarding date drawn from this incomplete evidence must
necessarily be tentative.

In Trap Grounds, overgrown cart timbers
A William Scott pot
Broken crockery, shoes, a toothbrush
A wooden sculpture fixed with string and brown paper
Forget-me-nots
The only antiquities of their kind which have not yet suffered at the hands of the
ploughman or gravel digger. The purpose of this enclosure is obscure.

There could be –
Imaginary machinery
Aeronautical sketchbooks
Portraits in buttons and keys
A natural acoustic hum
The ingenious operation of displacement
The majority, at least, are prehistoric

A pile of faded flowers still wrapped in cellophane
It is tempting to associate the two ring-ditches with the two small barrows lying
only a few yards from them, and to suppose that the flat area they enclose was used
for some part of the burial rite, perhaps for the exposure of the corpse. It must be
understood, however, that this is mere hypothesis.

A scattering of goslings
Raindrops preserved in the surface tension of a feather
(too small to illustrate)
A cowpat with a neat goosefoot arrow, pointing to the river

We omit any further discussion of the monuments described above, since, in the
absence of any evidence from excavation, it would serve no useful purpose.

6 thoughts on “Half Way”