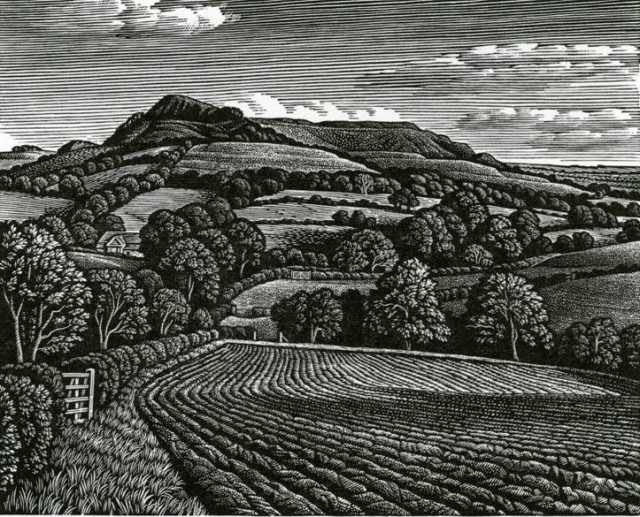 During the last few years I have become increasingly interested in certain distinctive downland hills such as Melbury Beacon, and hill forts such as Hambledon Hill and Winkelbury Hillfort. These either in Dorset or Wiltshire where the short turf on the chalk helps in defining their underlying structure, and where these hills often rise quite steeply from their surrounding valleys. I am also interested in the way artists often get involved with a subject over time, as I frequently return to a theme again and again. Witness Paul Nash for instance and his preoccupation with the two hills at Wittenham Clumps.

Illustrated above is Eggardon, a promontory hill fort in West Dorset, a subject I have known for years but only recently developed into a wood engraving. I thought it might be interesting to reprint alongside it a poem of the same title by my late friend Roland Gant. He wasn’t a prolific writer of poetry being for a long time editorial director at publishers William Heinemann, however during the 1980s I was commissioned by The Whittington Press to illustrate a slim volume by Gant under the title Stubble Burning. It was my first such commission. I was living in Devon at the time, and met up with Roland and his wife at the small farmworkers cottage which they rented in Dorset. Gant introduced me through his writing to Chilcombe and Eggardon and other such places which came to have meaning for me. I illustrated his poem Chilcombe at the time, but not Eggardon, however I’ve since returned to both places to draw and look in a fresh light. 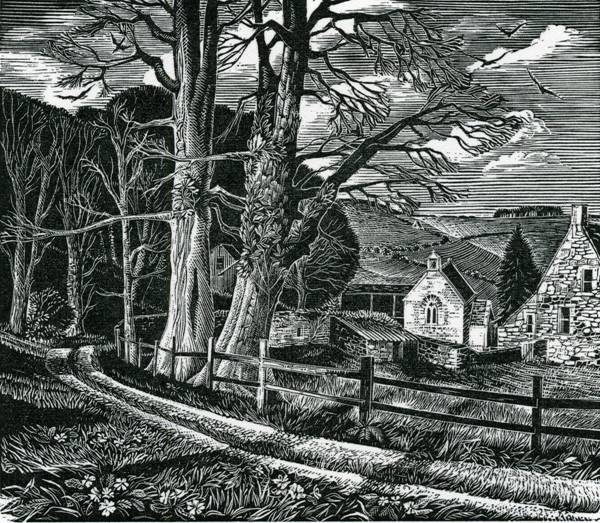 I only visited Eggardon once in 1980 on a sunny day when the light flattened the forms of the hill, so didn’t see it as Gant did in atmospheric conditions. My subsequent recent interpretation shows it from the North West with shadow picking out the rocky promontory in an Autumn afternoon light. Gant refers to this cliff-like area in his poem and connects it to Hardy and Gabriel Oak’s sheep in Far From The Madding Crowd. It is a part of the hill which I think is worthy of further investigation. 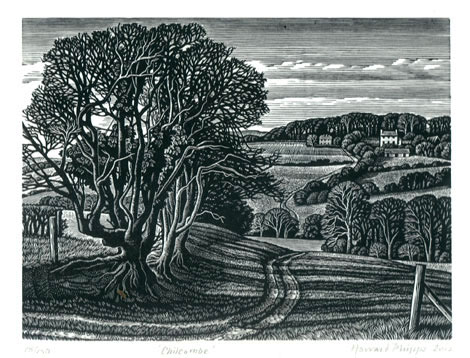 Stubble Burning was published in 1982, printed letterpress and from my boxwood engraved blocks in a limited edition. Roland Gant and I collaborated on two further volumes and became good friends before his death in 1993.

The earth iron-hard
the grass crisp-rimed
the mist low as clouds,
tangible, edged with frost,
expanse obscured, the rock below
gleaming white as ice.
Christmas Day, and Christ
an upstart modern
to those whose bones lie there
whose muscles moulded
a fort from the ice-made contours.
A child, a woman and a Viking man
who had sailed the seas
of Erik the Red and savoured
true Vinland. And the child
frost-flushed and prey to delight
somersaulted on the misty hill
with laughter ringing flat
on the damp-deadened air.
Emulating childhood
I took a tumble too
and sensed a dead chalk hand push me
into the helpless, hopeless tilting run
to the very edge.
Like Gabriel Oak’s sheep I blundered,
stumbled and then was hindered
by the rusty barbed wire fence
and catapulted back, torn and shaken,
to the feet of the child, the woman
and the man.
The mist rolled thicker
the rime crunched crisper
Christmas was gone
Christ had burrowed deeper
into the long barrow
of long-gone men.
Eggardon stayed
frosty, remote, indifferent.

The signs saying ‘Passing Place’
triangular, black and white,
after the polite notice
asking not to trespass
and kindly keep to the road.
What passing place can there be
on Eggardon?
What trespass can there be
On Eggardon?
What path can there be
On Eggardon?
Hardy aside, it is a mindless,
pathless indifference, not
the cruelty of nature.
As indifferent as the depth
of that sudden, myth-inspiring crater
in the Australian landscape.
Where flocks and herds have fallen,
yet, explored, no skeleton remains.
And there was the panic of sheep
driven to the prow of the hill
and their Gadarene death
Below Eggardon.