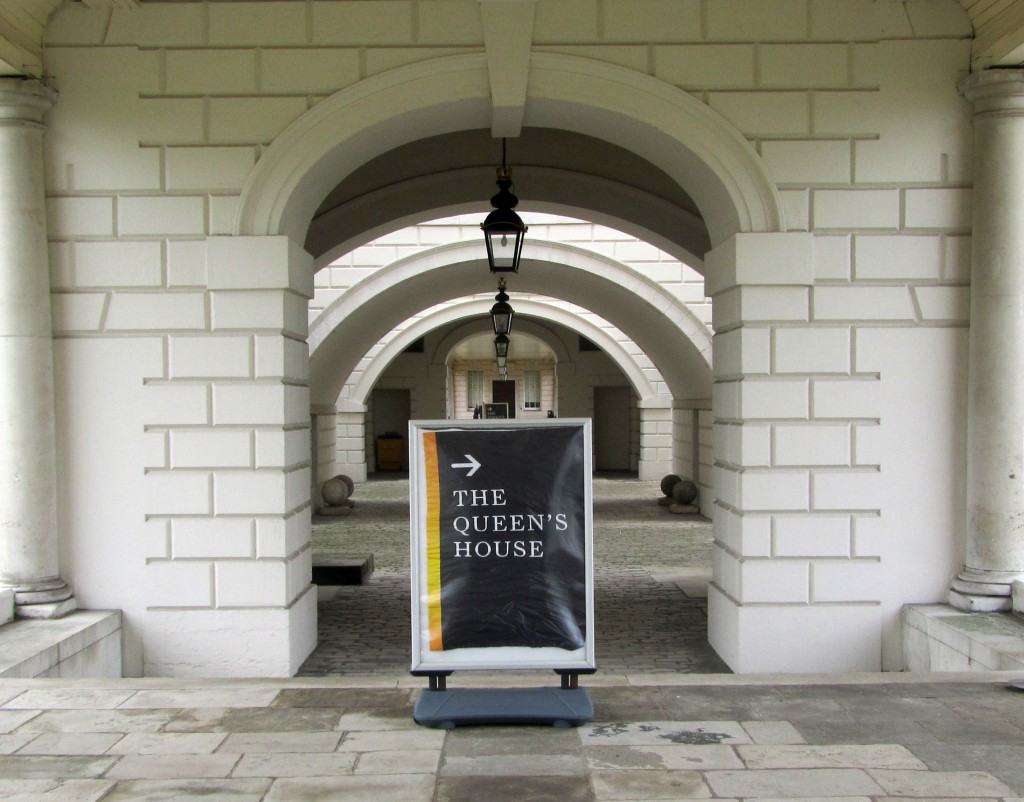 After seeing the final episode of Waldemar Januszczak’s Baroque!-From St Peter’s to St Paul’s, in which he singled out the Queen’s House as possibly the most important little building in the whole of British architecture, we felt inspired to visit this previously overlooked prime site. 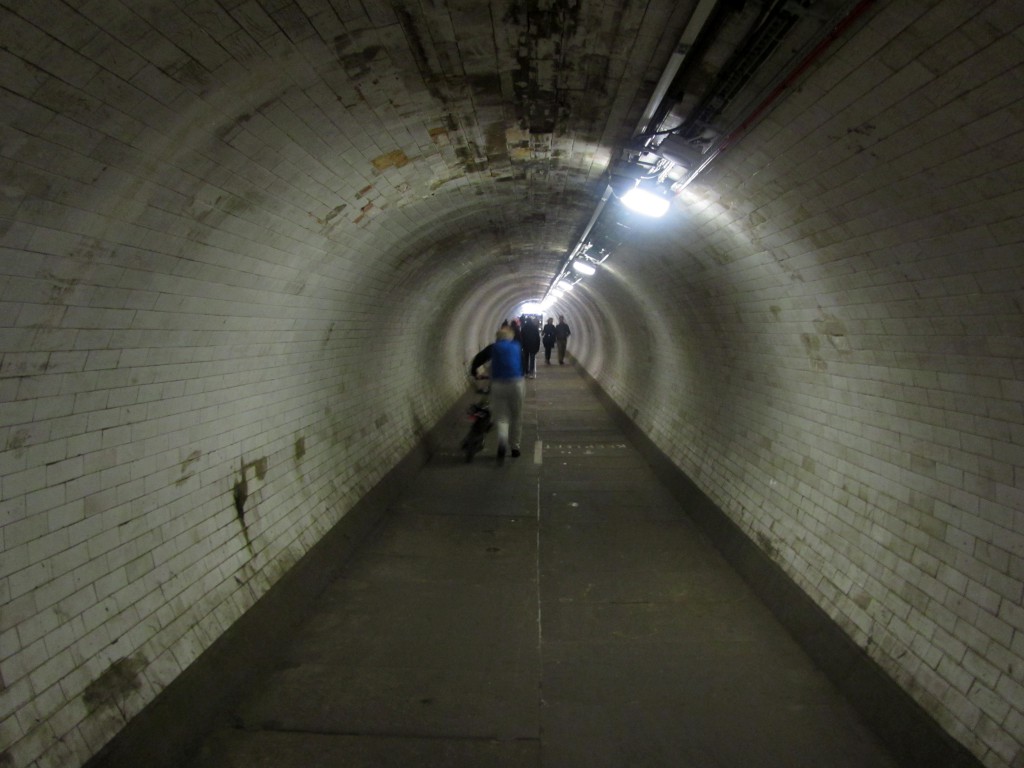 The Greenwich Foot Tunnel is perhaps not the most spectacular approach but it’s an effective link to the Isle of Dogs and can still feel pioneering and adventurous though perhaps somewhat malodorous. 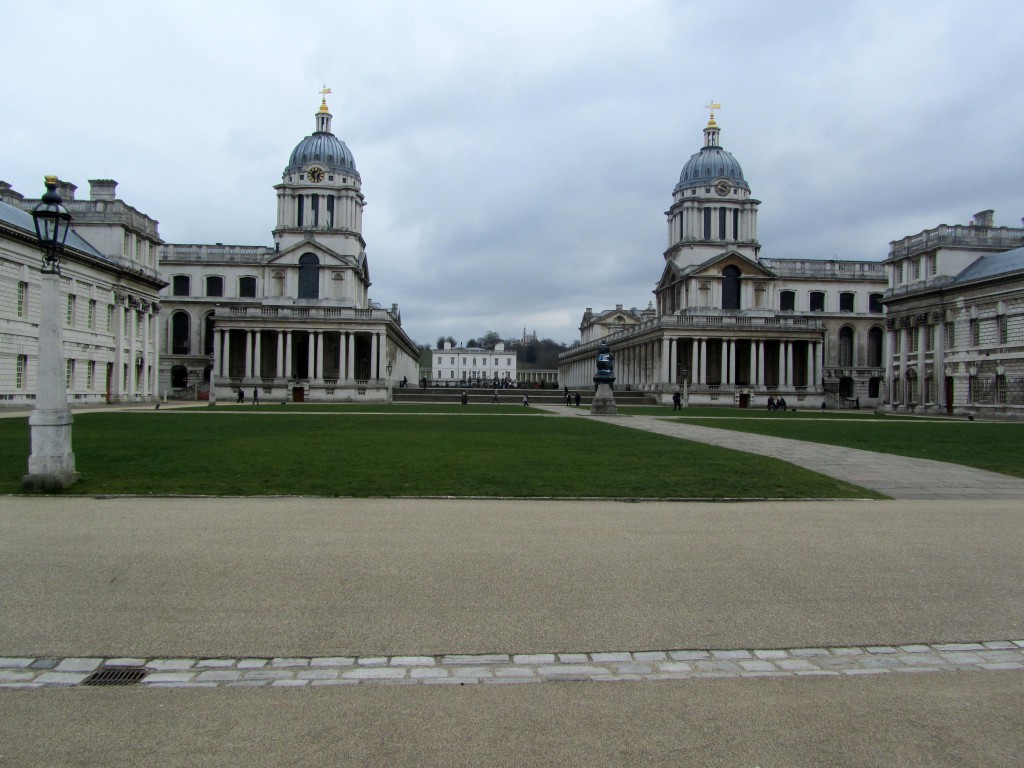 Resurfacing on the south side of the river, below the Cutty Sark, there is grand view from Greenwich Hospital riverfront up to the Queen’s House and the Royal Observatory on the hill beyond. 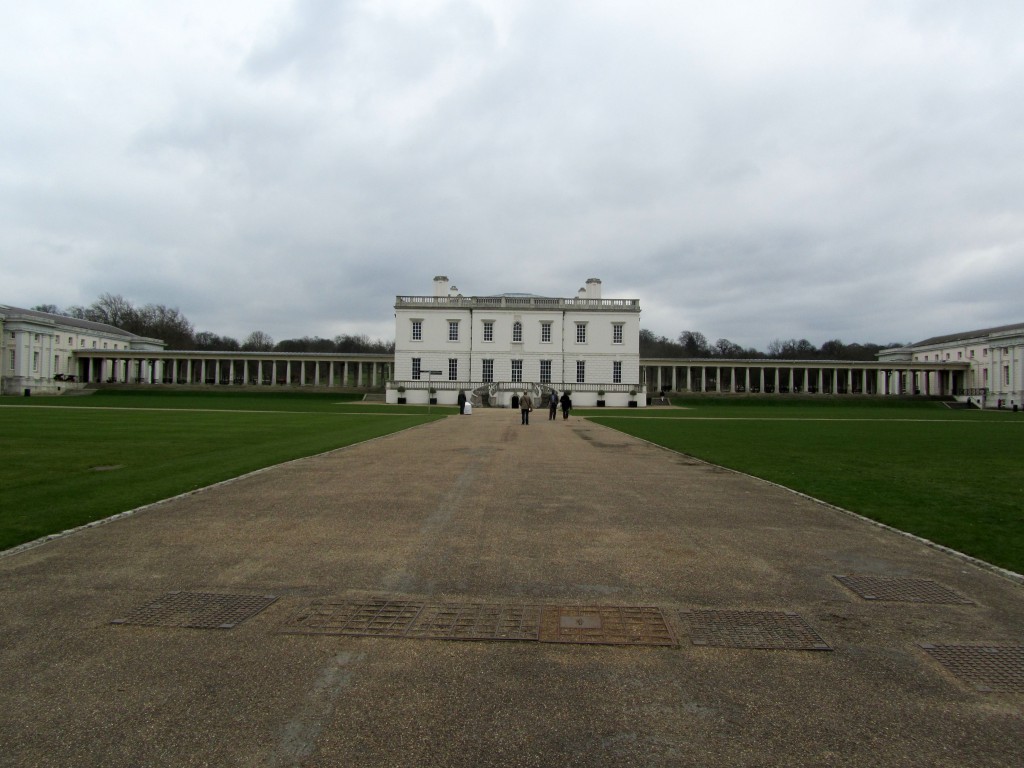 On previous visits to Greenwich the Queen’s House was overshadowed by the National Maritime Museum or the Royal Observatory, Cutty Sark or Greenwich Market, Greenwich Park, Greenwich Bookboat or the Fan Museum. It appeared such a simple building and was always easily overlooked. 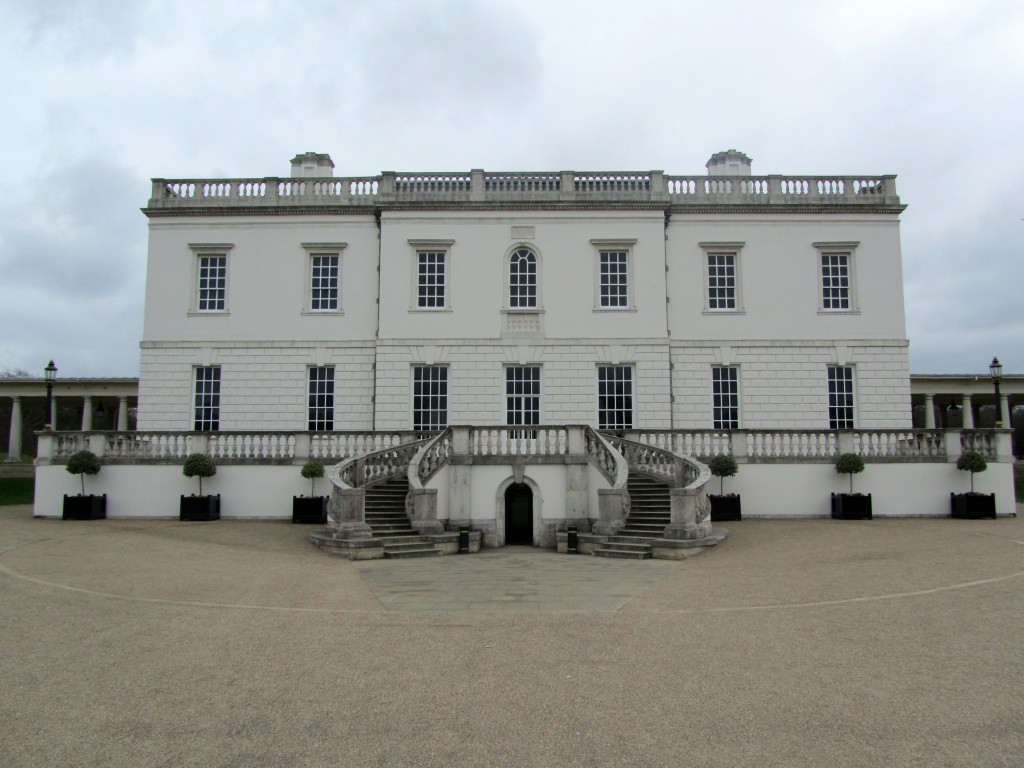 The Queen’s House was commissioned by Queen Anne, wife of James I, from the architect Inigo Jones. It is notable for being England’s first classical building and for introducing Palladian architectural ideas from Renaissance Italy into Tudor England. 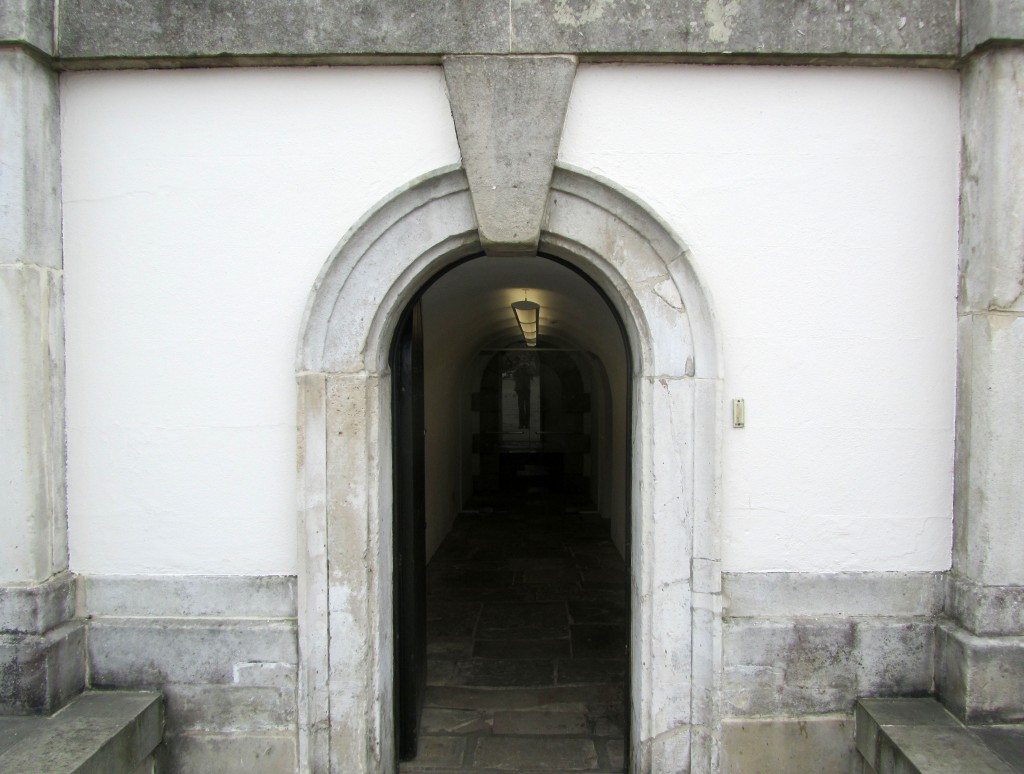 The entrance feels strangely familiar and subterranean, down through a tunnel into the undercroft 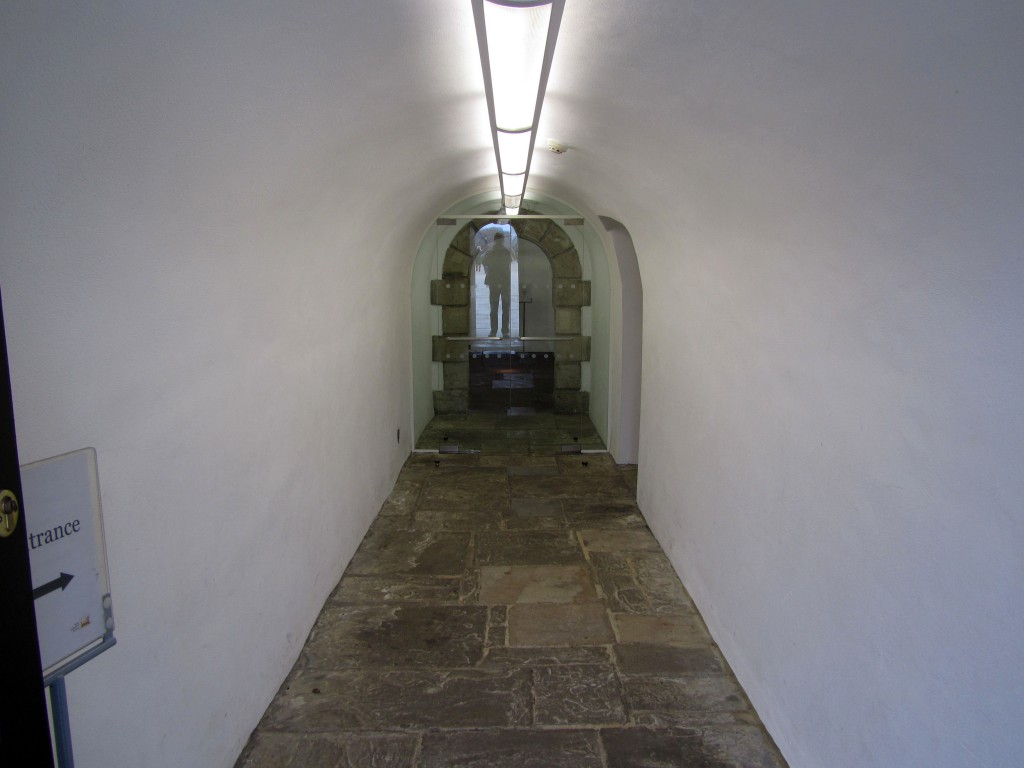 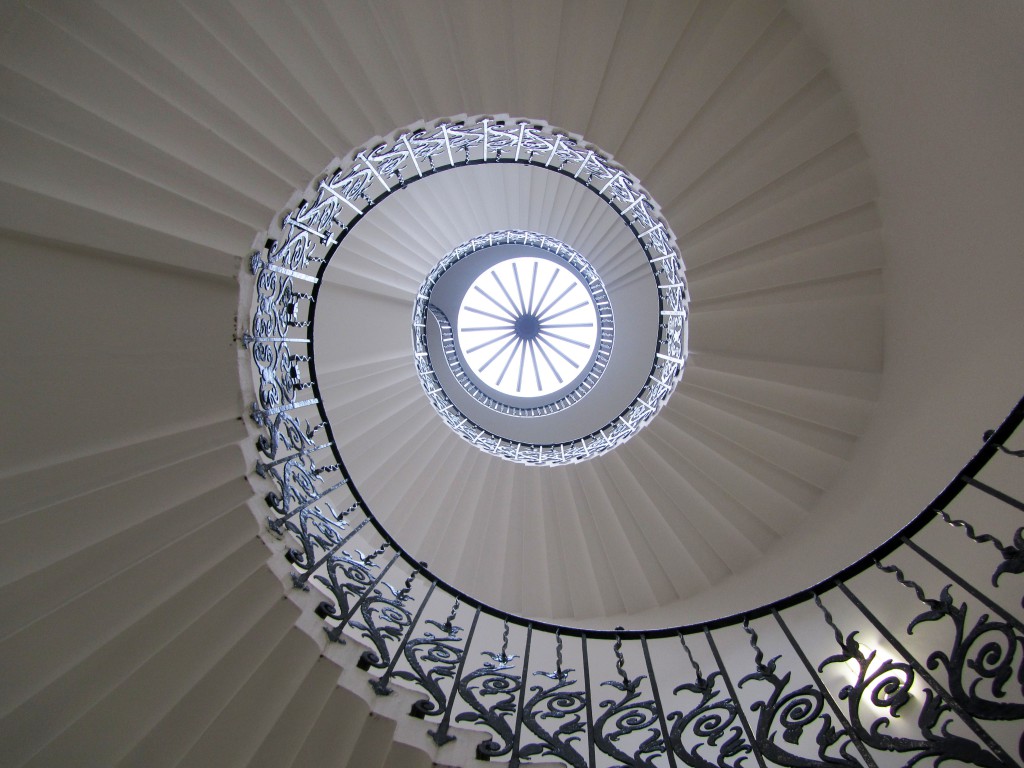 and then up the Tulip Staircase, the first geometric self-supporting cantilevered spiral stairs in Britain, 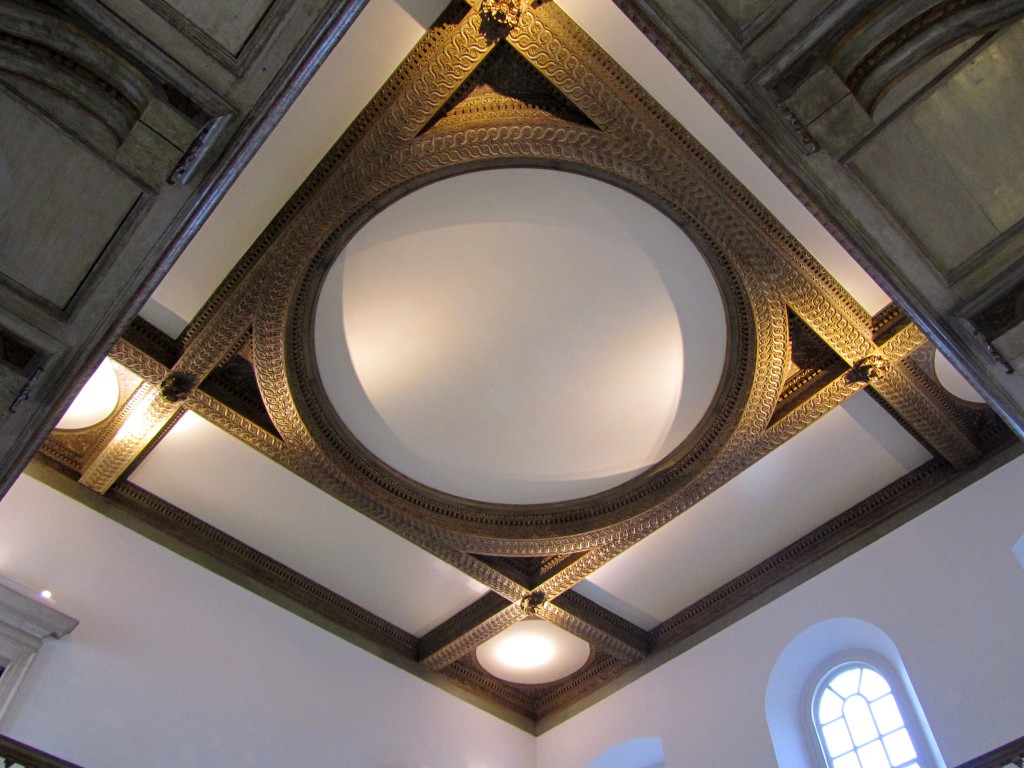 which leads to the Great Hall, a perfect 40 x 40 foot cube with a wooden balcony and a marble floor. 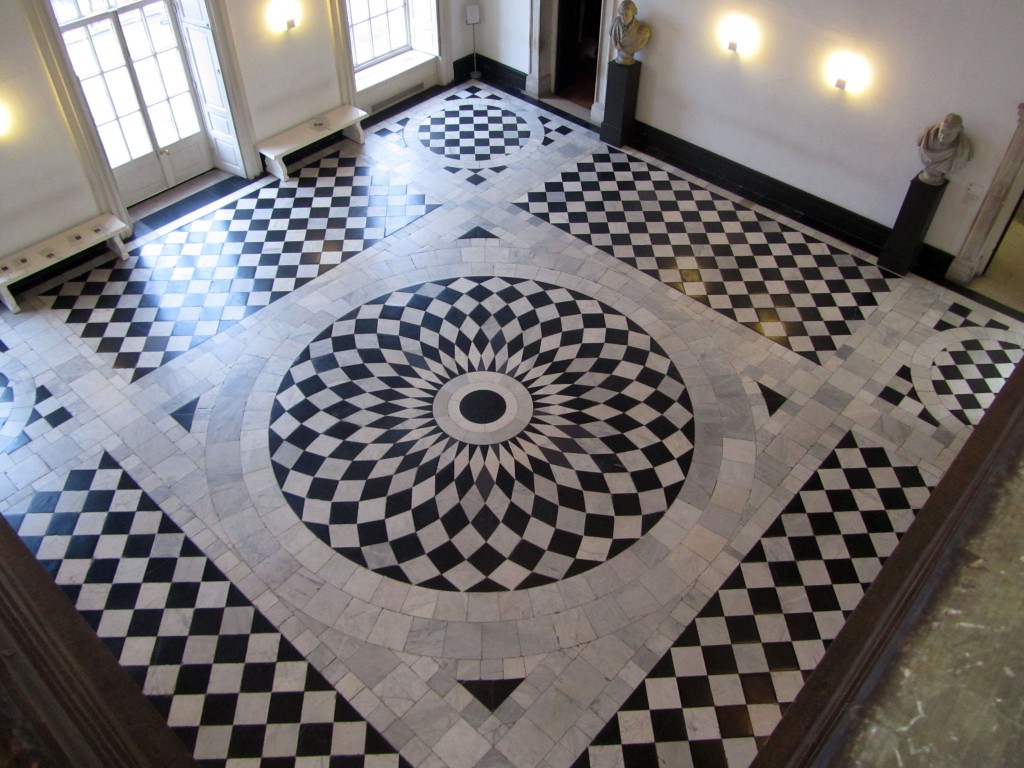 I love the way the ceiling echoes the floor. The building is simply and beautifully proportioned, with clean lines that must have appeared revolutionary alongside the everyday vernacular Tudor buildings. 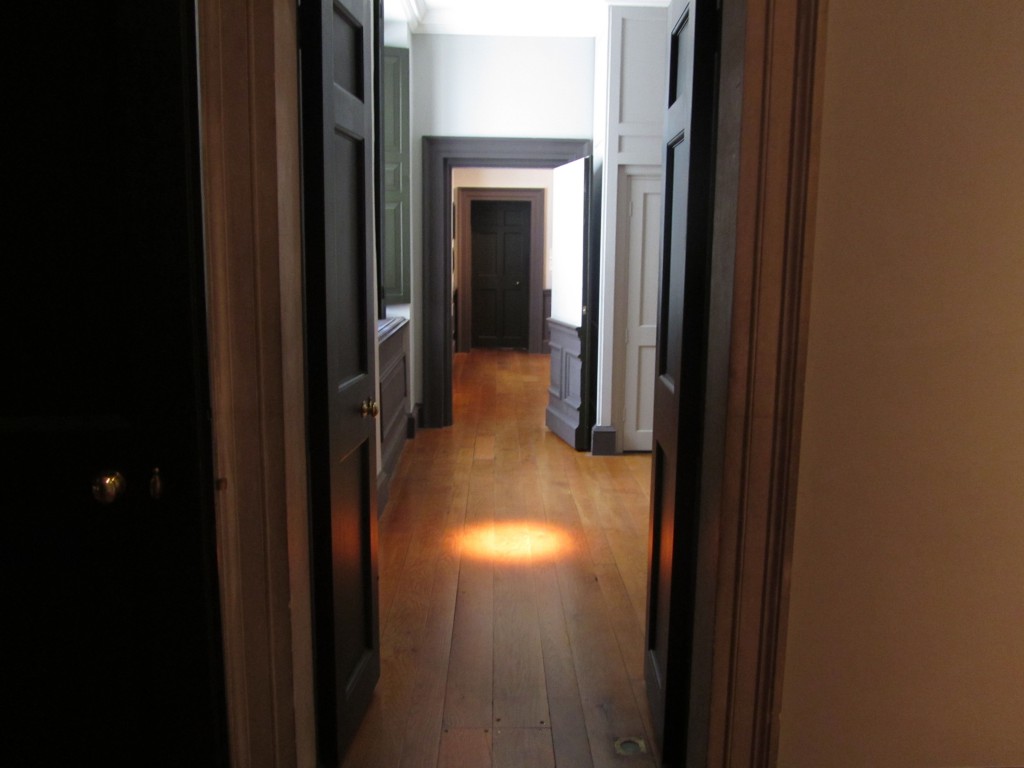 The house is filled with room after room of wonderful paintings but I came ill prepared to record them. My photographs were fuzzy and out of focus because of dim light but here are a few of the better ones. 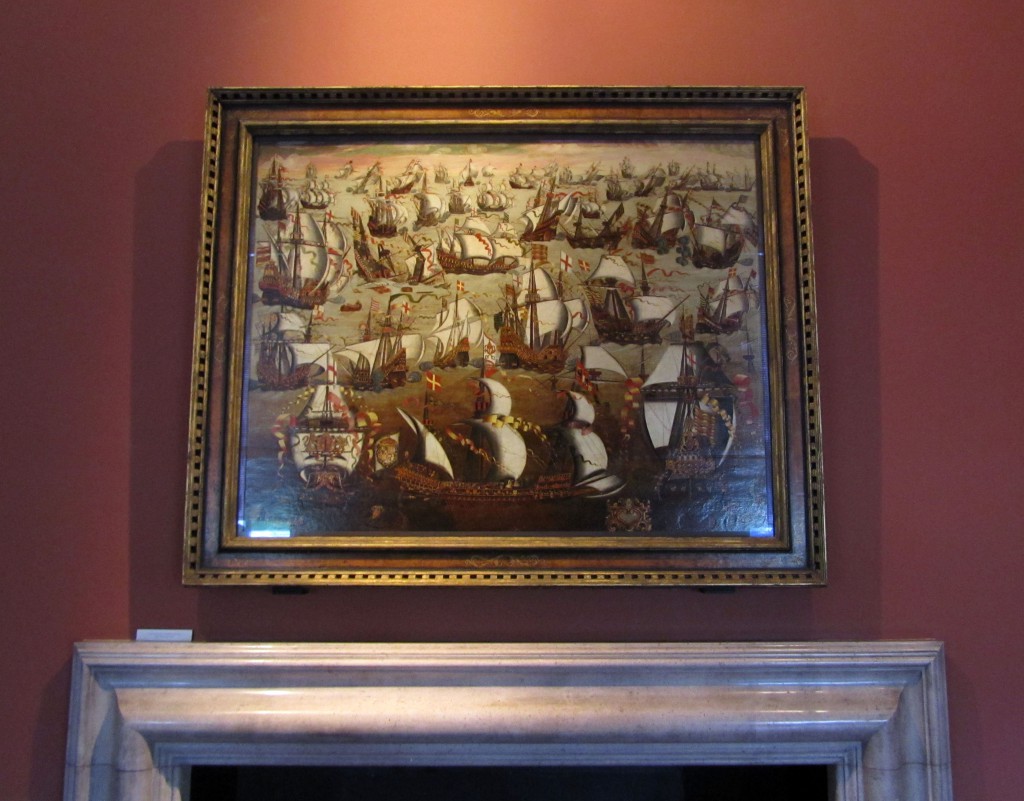 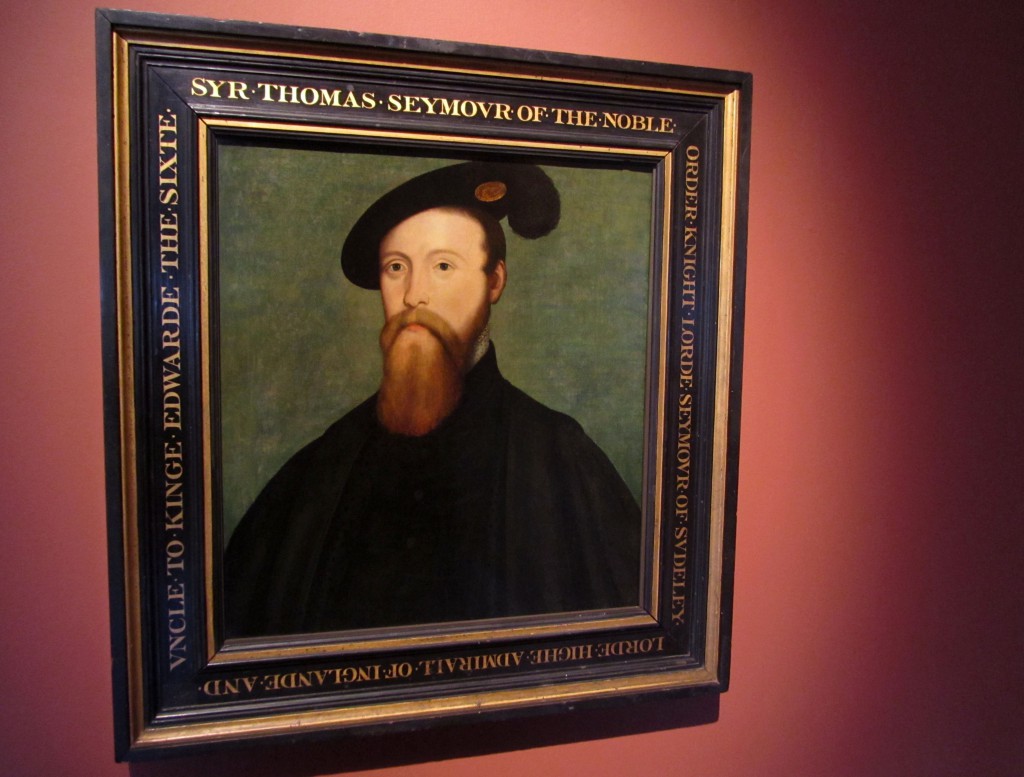 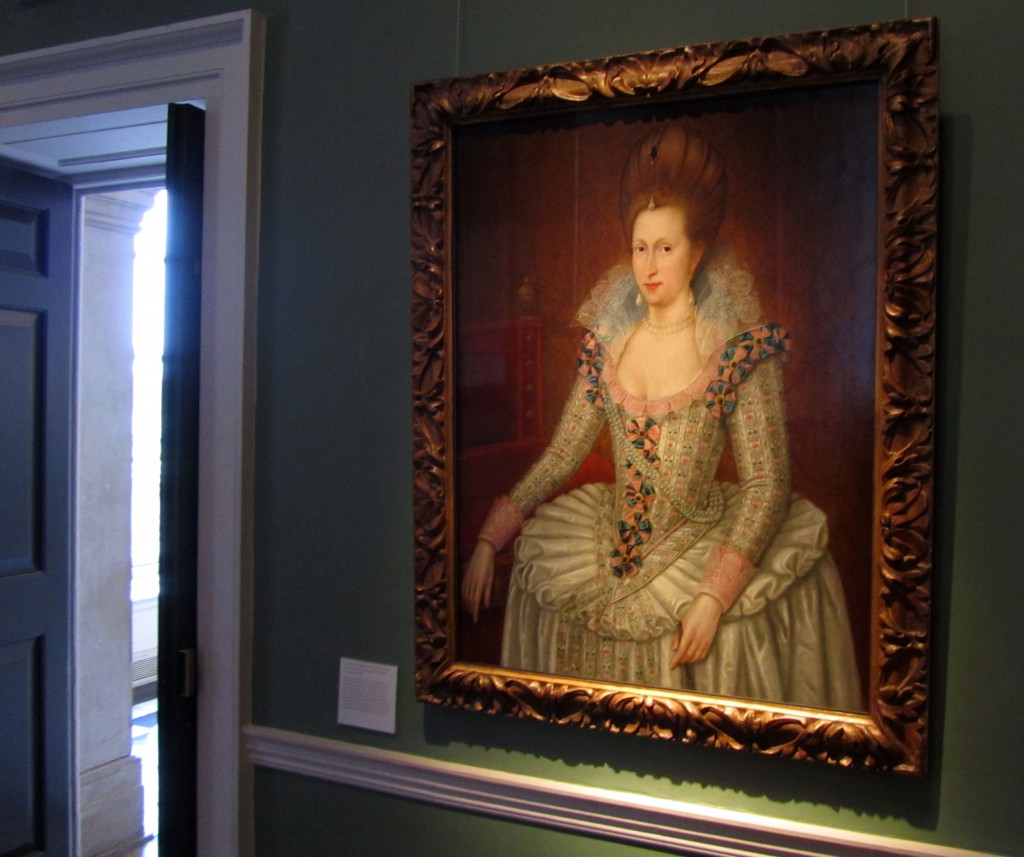 This is Anne of Denmark, the queen for whom the Queen’s House is named since it was she who commissioned Inigo Jones to build it in 1616. Her frame is almost as interesting as her painting. 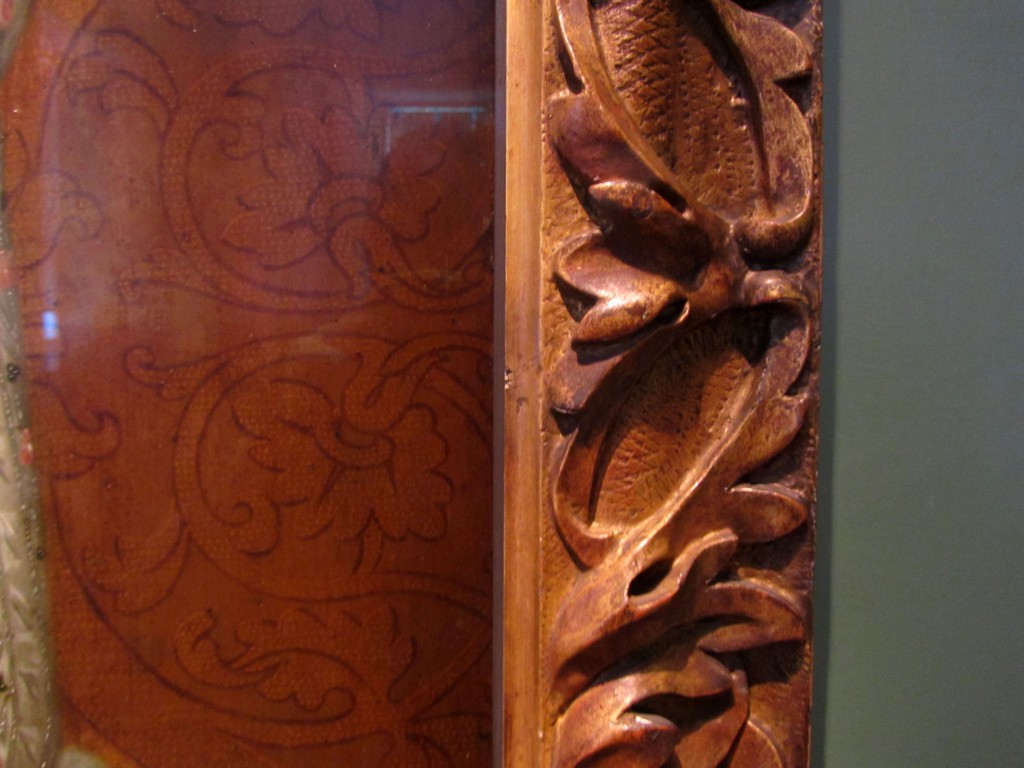 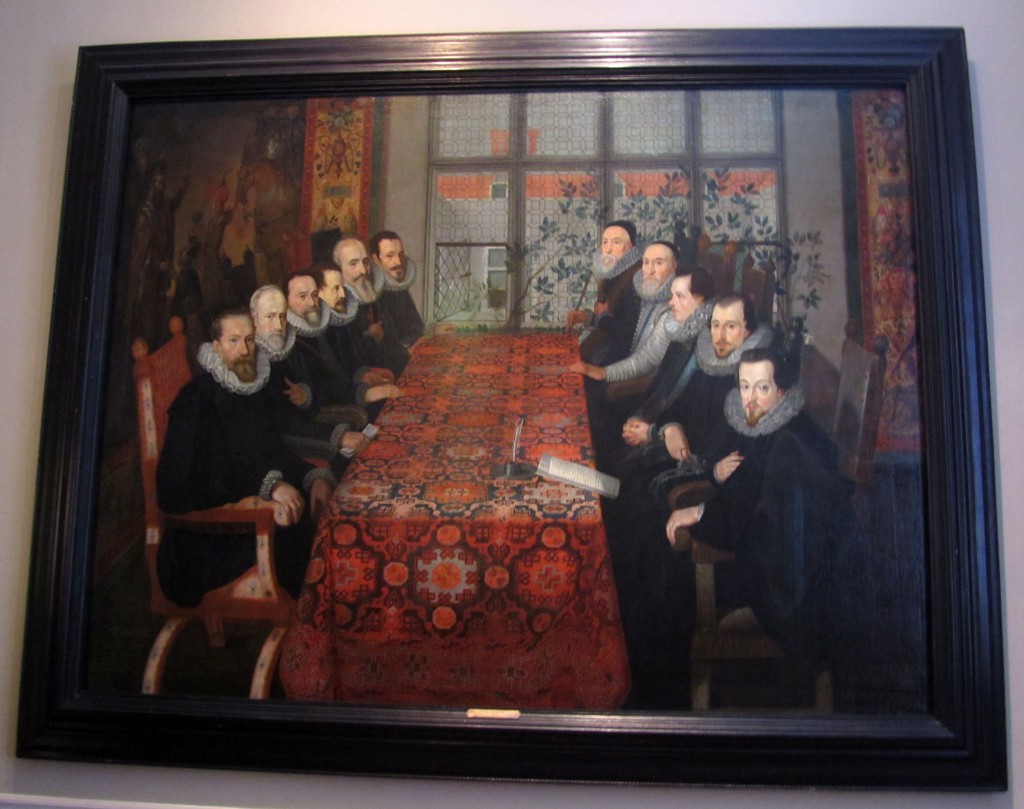 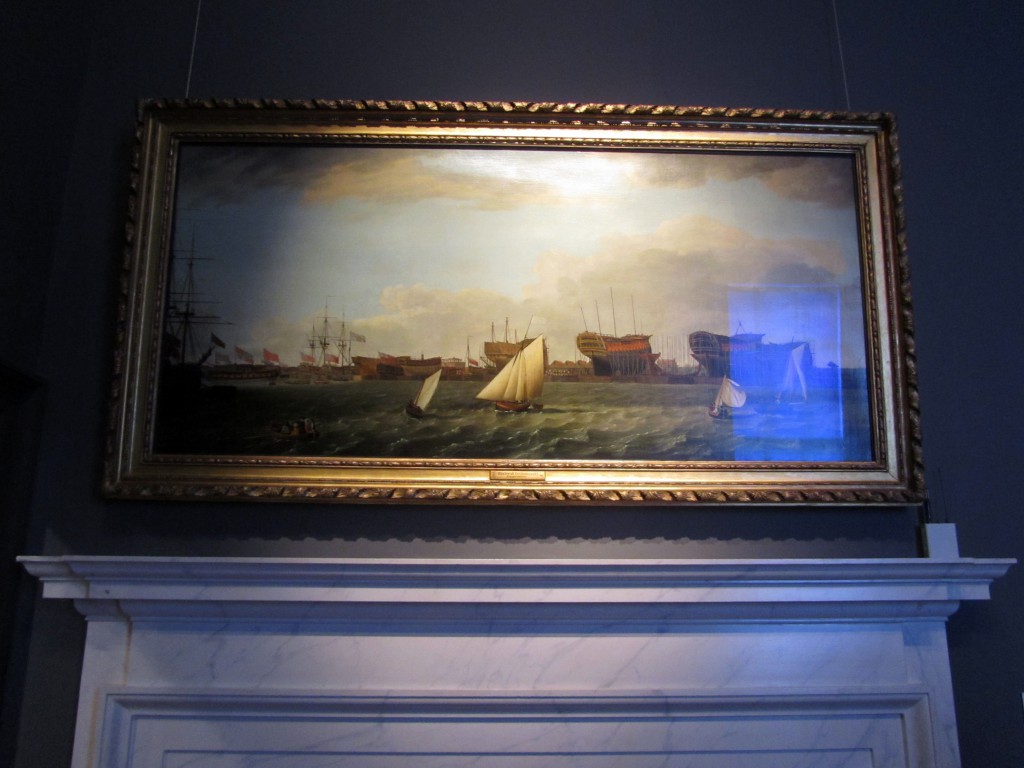 Blackwall Yard from the Thames, the world’s largest private shipbuilder, by Francis Holman, 1784. 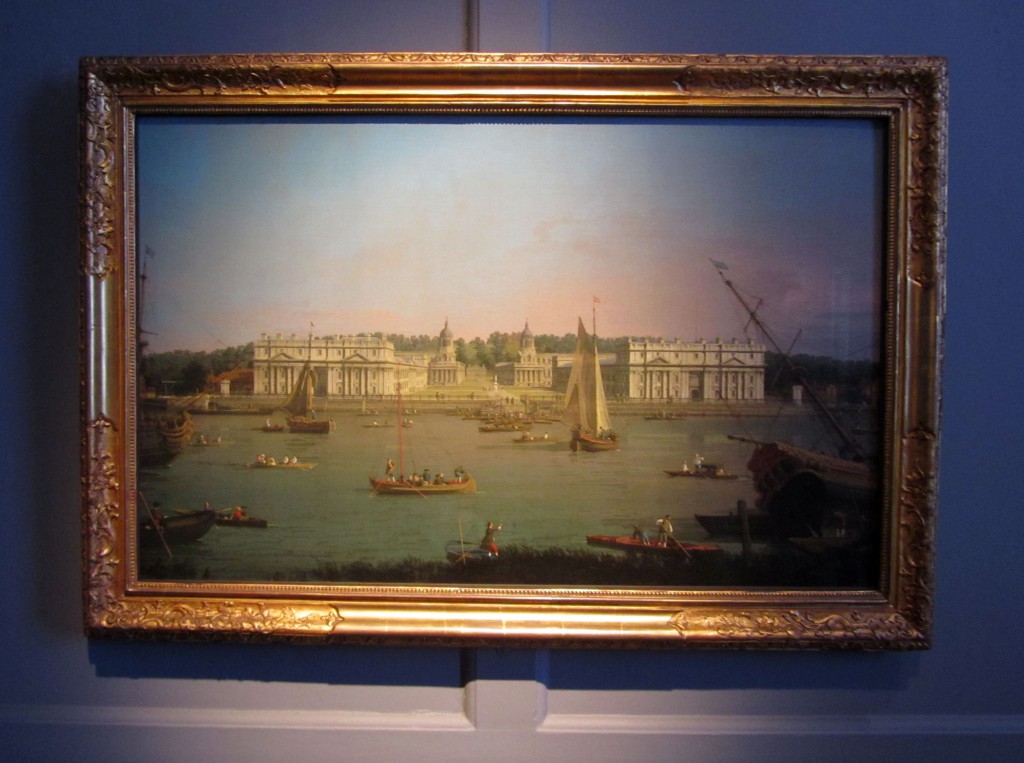 Greenwich Hospital from the North Bank of the Thames by Antonio Canal, aka Canaletto, c1752. 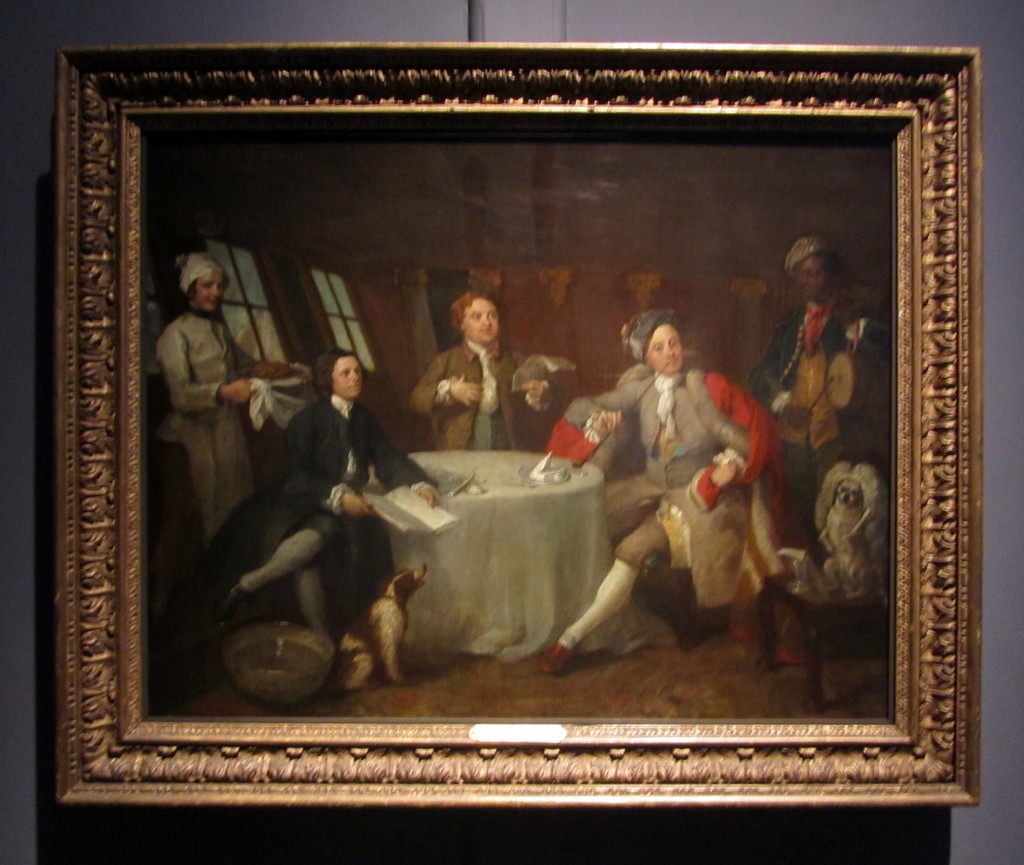 Captain Lord George Graham in his Cabin by William Hogarth. The painting includes a portrait of Hogarth’s dog on the right wearing the captain’s wig and dressed like an 18th century master of ceremonies. It is thought to have been painted to cheer up Captain Graham after a bout of ill health. 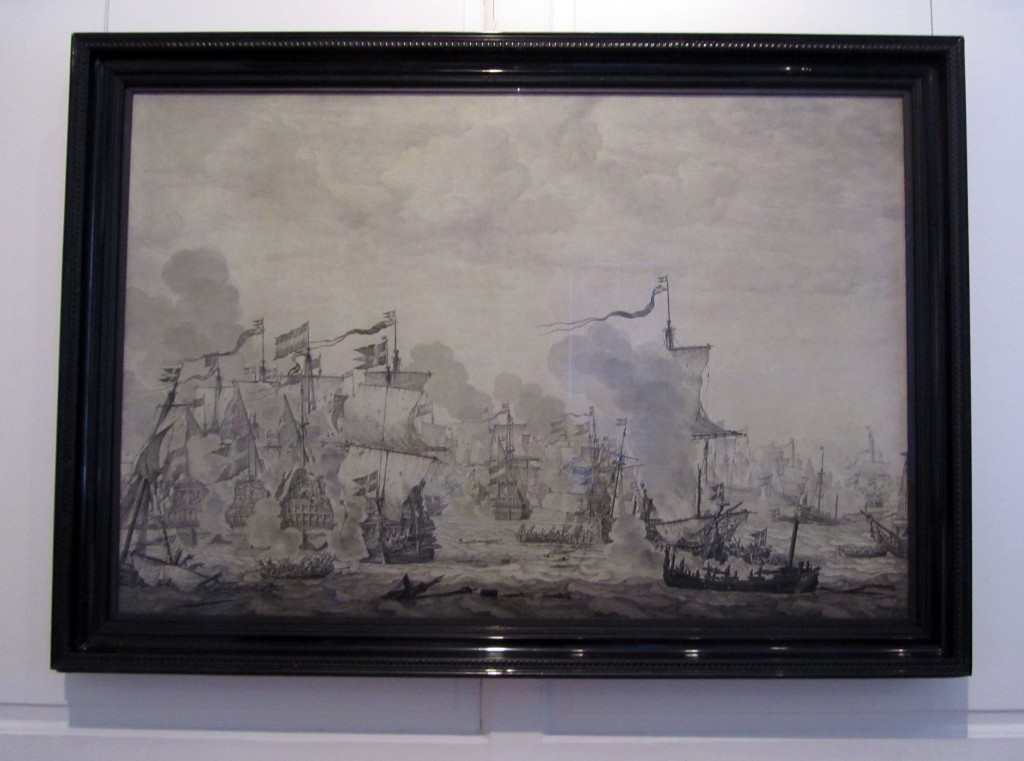 The Battle of the Sound by Willem van de Velde the Elder, grisaille on canvas, c1660. 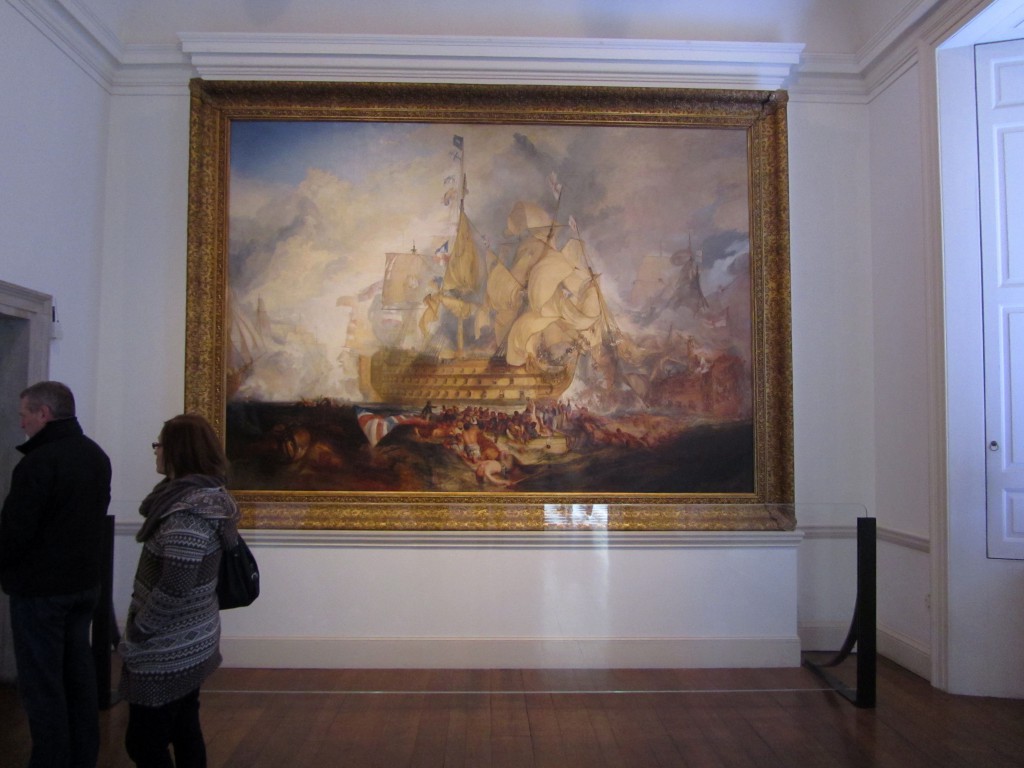 The Battle of Trafalgar by J M W Turner. This large painting sits on a plinth rather than hangs from the wall, probably because of the weight of its huge frame. The mitred corners are discreetly covered. 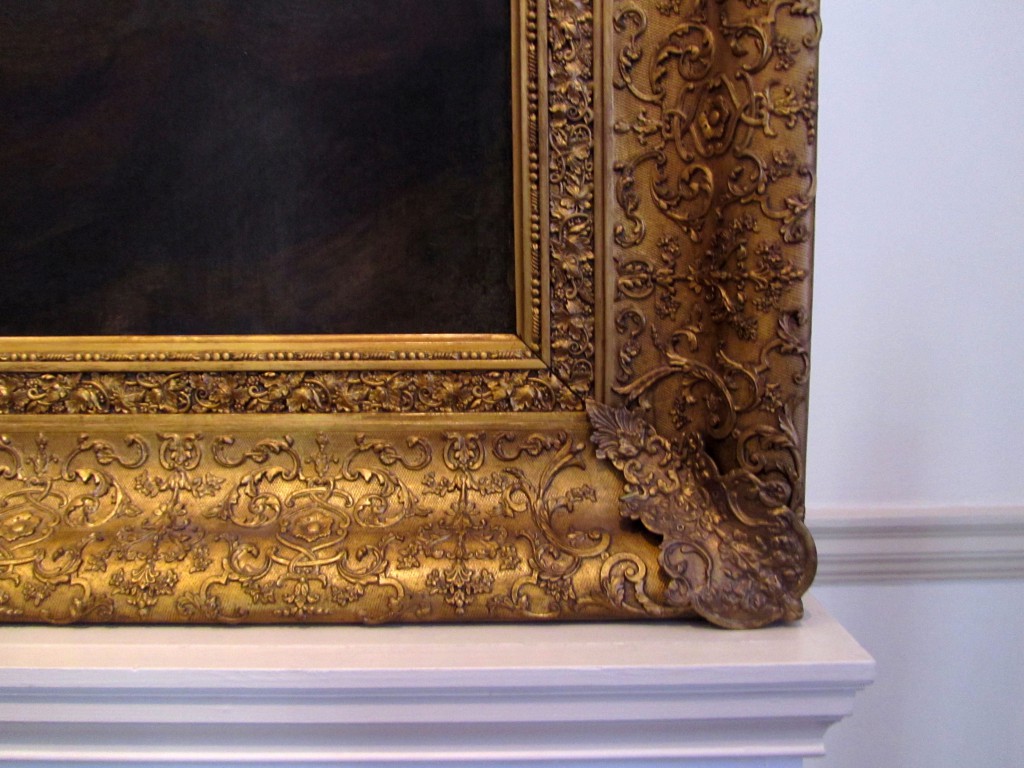 This picture frame was recently restored. Read more here. There are many more paintings than I can show here and all with magnificent and interesting frames. They were all a bonus since we came out simply to see the house. Worth it just for the spectacular Great Hall alone. Thank you Wally.

2 thoughts on “The Queen’s House”