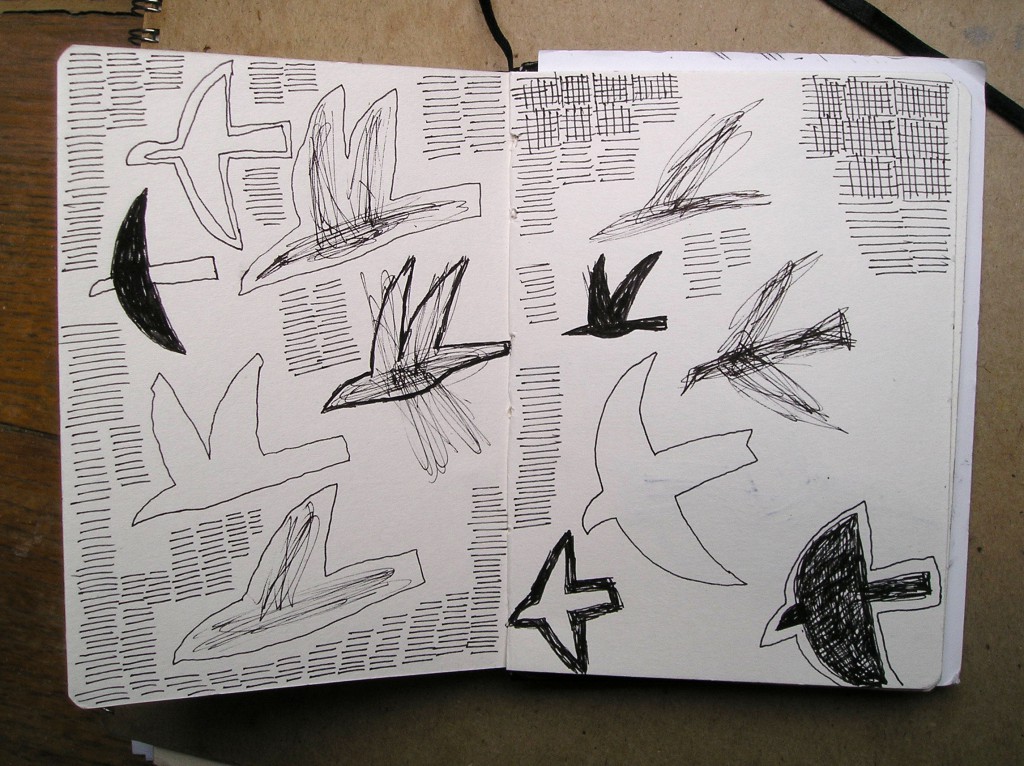 Dear Chris, As mentioned here are a couple or so photos and two sketchbook pages of bird images. I could write for a thousand pages about Port Meadow. I’ve been there ever since I was six years old. It floods in winter, gathers over wintering migrant wild fowl. In the summer it’s a place people swim, sail, walk, make love, do archaeology etc. If you want I can get David to send his poem about the meadow which refers to a drawing of mine. Best wishes to all, love, Andy. 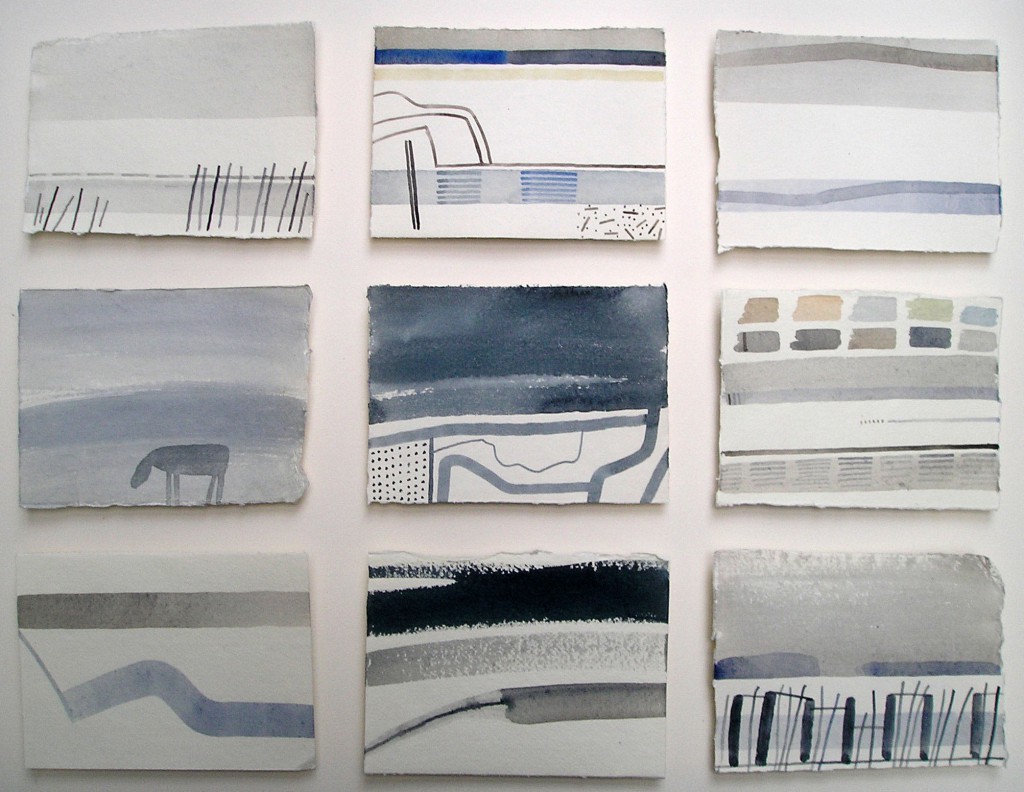 Blank: the water meadow we both walk across
Is veiled in mist and frost, a screen for time
Stuck between clicks deleting and loading data;
Teaches us to read objects singly, in freeze-frame.
Blink: a bare tree’s film-star silhouette,
A polystyrene lump in a pool’s iced rim.

Tracks waver like forgotten passwords on ground
that was never ploughed: we clock these coded lines
Drawn on a primed canvas by cattle, horses,
Bottle pickers, ducks, Dunkirk evacuees, gamblers,
Airmen, geese, and us – an opaque script unspooled,
Random as a scattering of pale feathers. 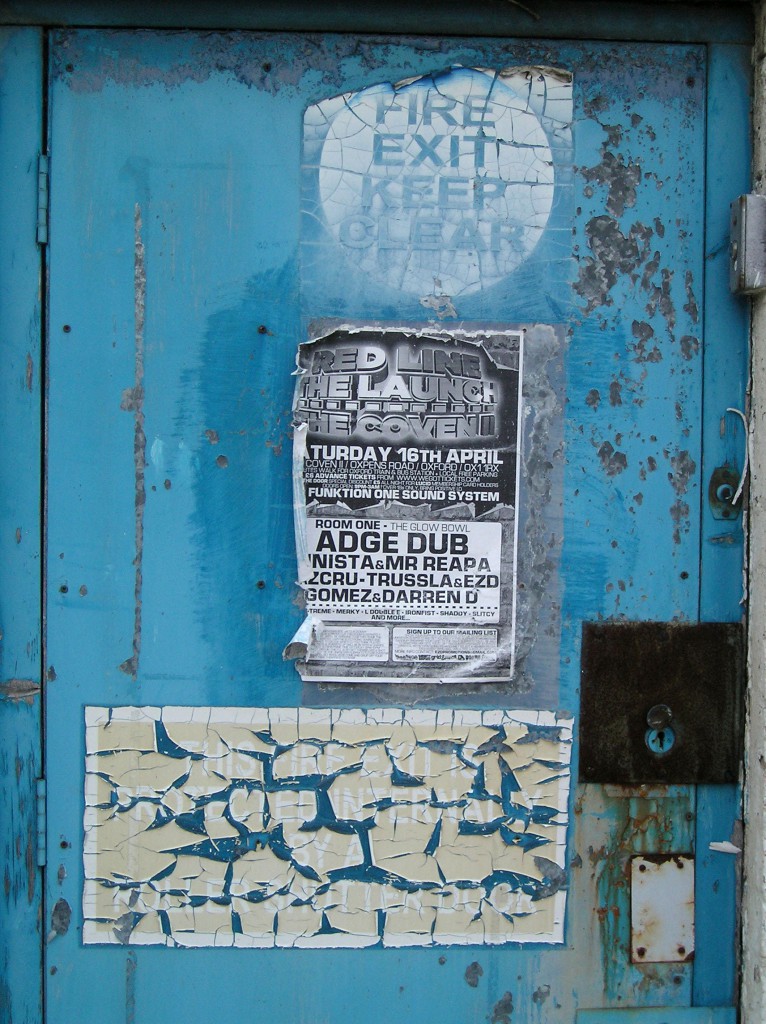 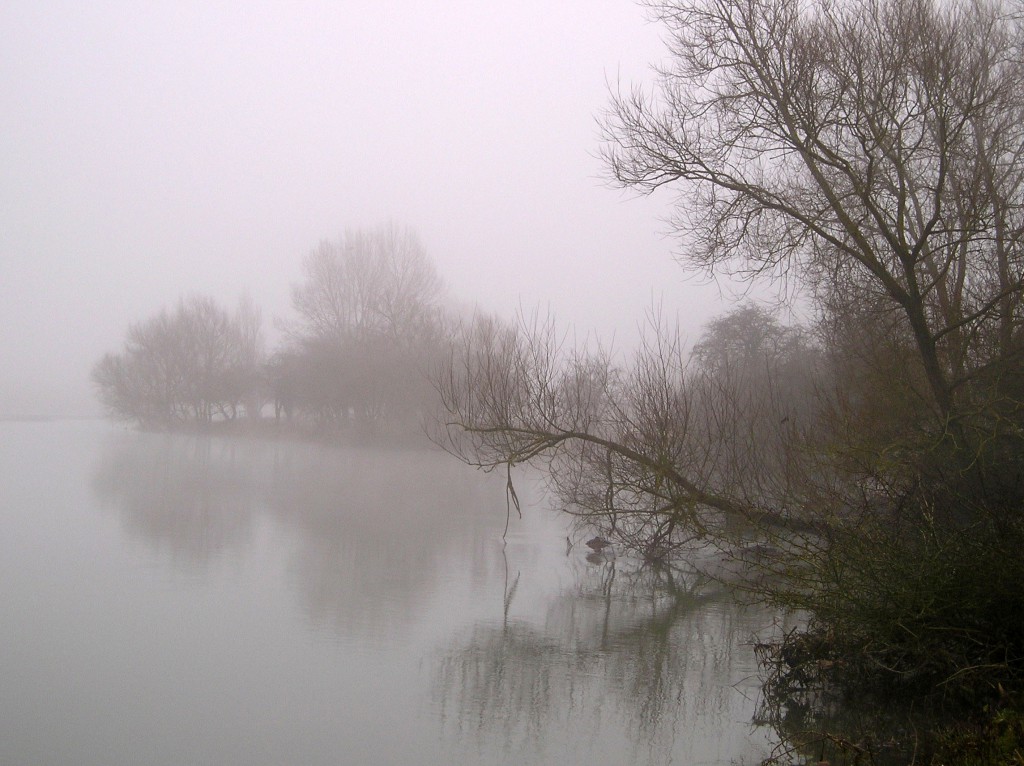 I have known Port Meadow for sixty years. As a child it was my adventure playground where I swam in the River Thames, built rafts to float on winter floods, skated when it froze. It is a three mile stretch of water meadow. Never ploughed. Grazed by horses and cattle. A wintering stop over for wild fowl. It is there that I learned to love birds. Not as a twitcher, just the beauty and presence of them. It is where I feel most at home. It’s like another skin. Over the past 35 years or so I have periodically made paintings there or made work in the studio from the experience of it. Some of the best shown at The Rowley Gallery and to be seen on the website. Recently an old friend, David Attwooll and I thought it would be interesting to try to do something together as painter and poet. We started this by walking the meadow. It looks like it will be a monthly outing. So far we have had December fog and January snow. I have been back alone with a camera and sketch book. It was too cold in the snow to draw. The ink froze in clumps of ice on the page so I have taken photographs. Not to work from but as aid memoirs if that’s the right term. The little watercolours are the start. Working back home. Thinking of the colour and emptiness (apparent) but really one sees the amazing pattern of animal paw and foot prints in the snow that give the lie to this being a place of solitude. The collaboration with David opens up new things in our friendship and over this year the kind of notebook nature of what we do might shape up into something coherent. 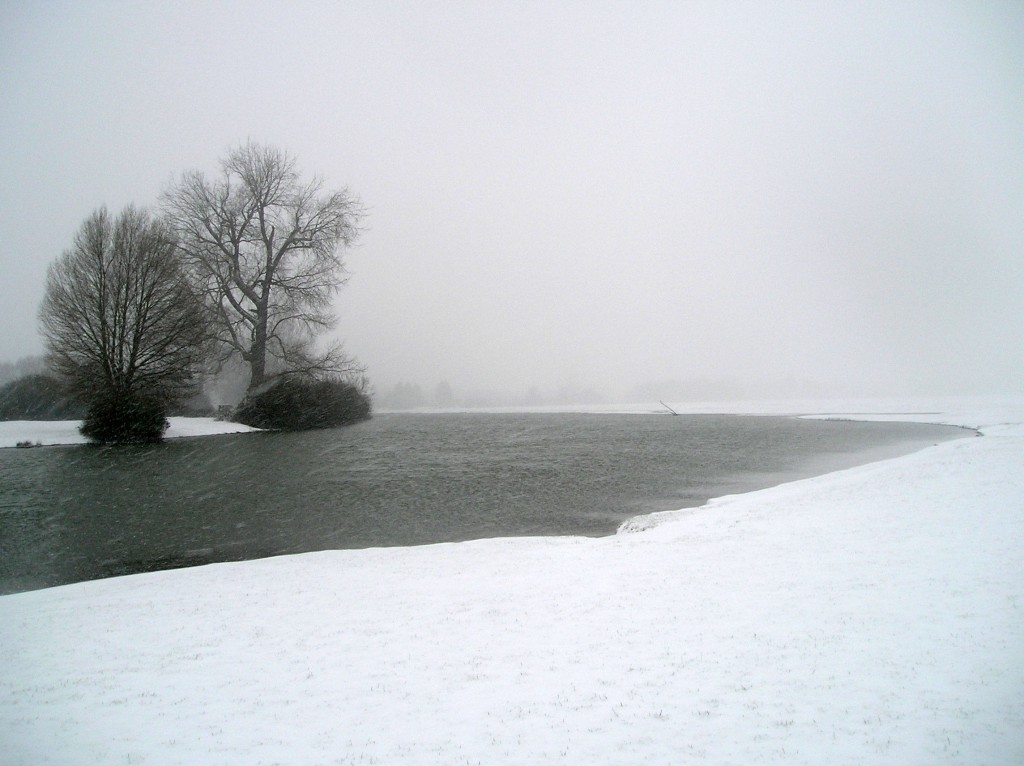 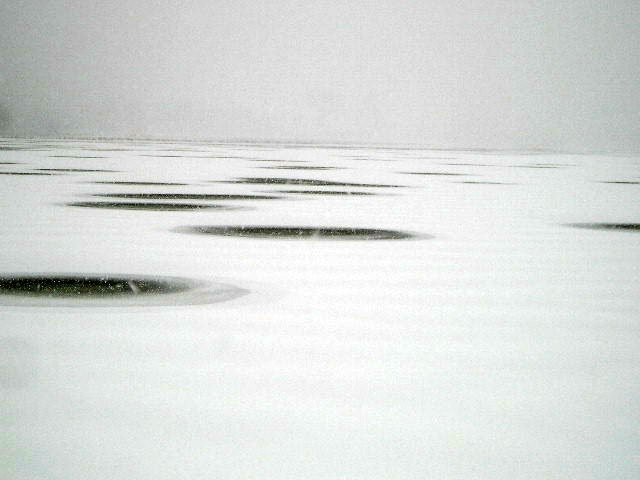 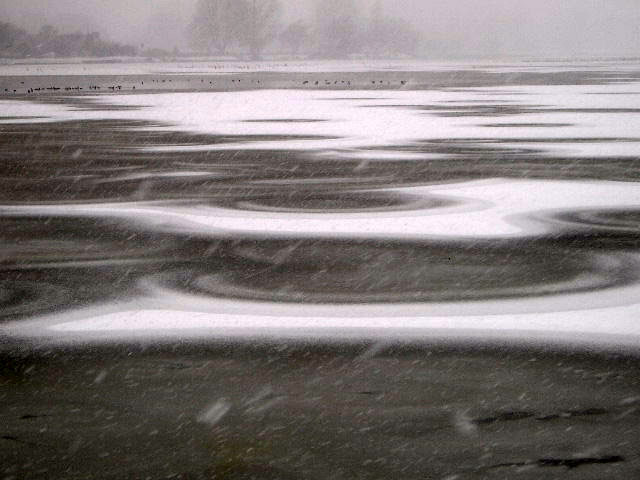 I’m not so good at finding the exact words to explain what goes on when painting. There is an absorption in the use of the materials. Sometimes it feels like I am closer to a painter of plates. Repeating a motif, the repetition refining and simplifying. Or it feels closer to a baker working dough and then letting the oven do the work. Always though I feel barely in control of the outcome.

I have a book, Empty and Full: The Language of Chinese Painting, I dip into it now and then. It helps me when I don’t know why I am doing what I do. Here is a good one from Lao-Tzu: 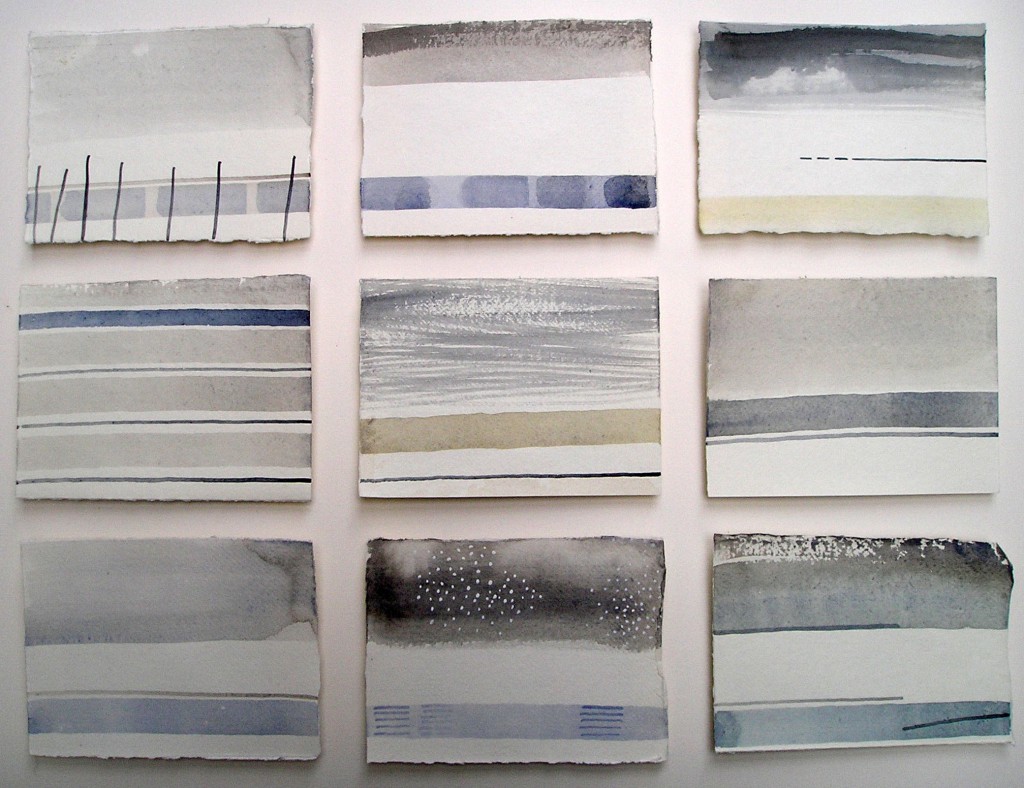 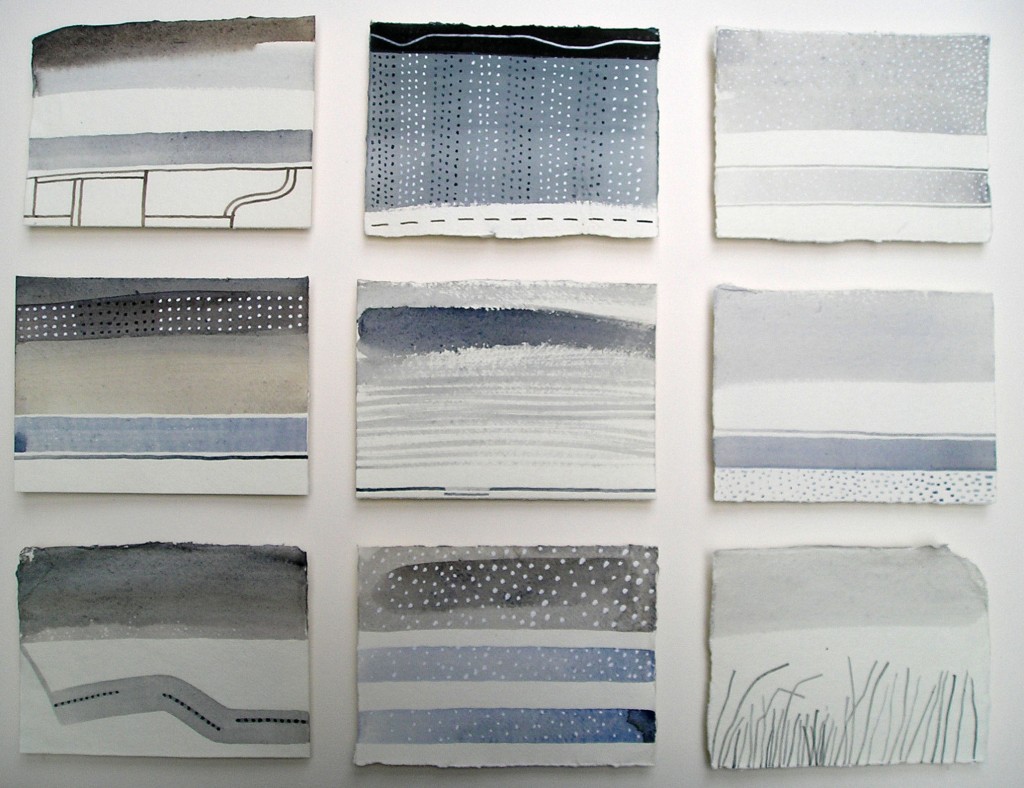 Snow is a changeling,
shape-shifts in the arms
of the land, redrafts
where it rests – outlines

elsewhere. Snow’s a search process
touch-typed on the land,
a page not found,
paragraphs of spaces

pasted here on a plain field.
The steel sky sulks, reboots
with backed-up snow, makes
us small in the world. 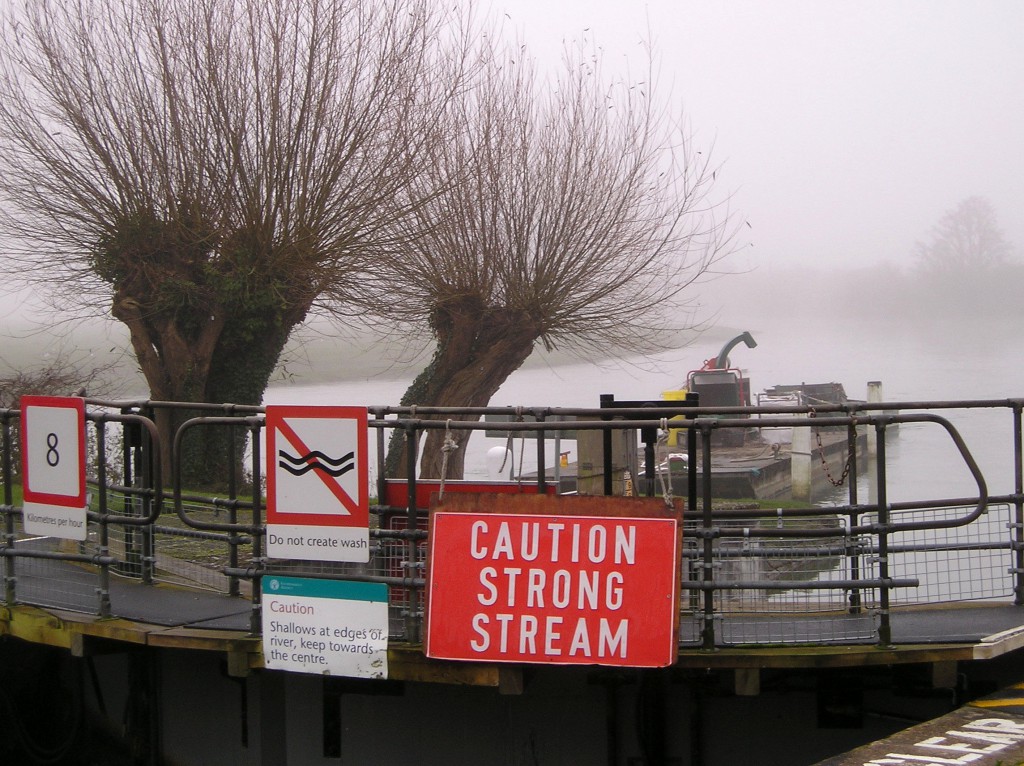