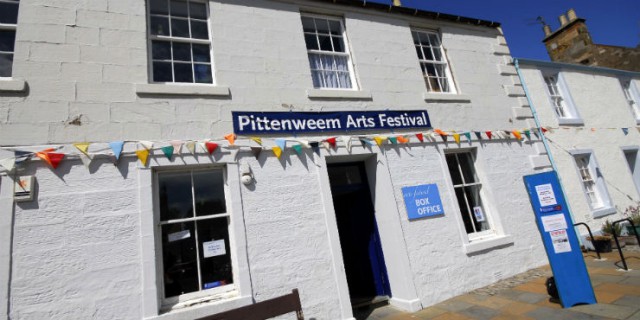 Ever been to Pittenweem? It’s a wee fishing village in the Neuk of Fife, nestled amongst other wee fishing villages like St. Monan’s and Anstruther. Once a year they have an Arts Festival and I was privileged to be one of the four invited artists this year. 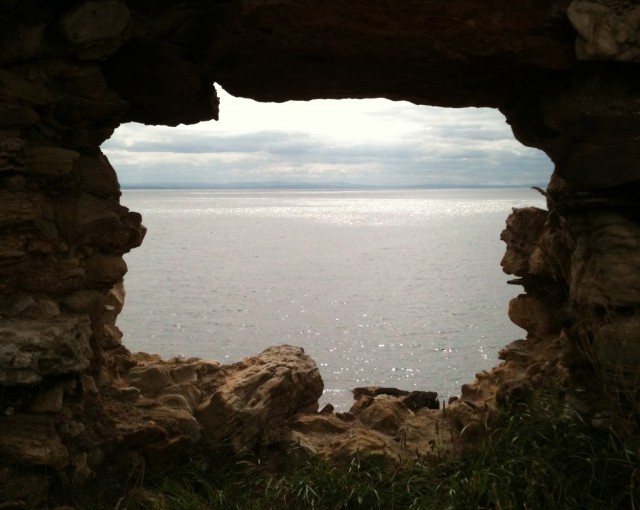 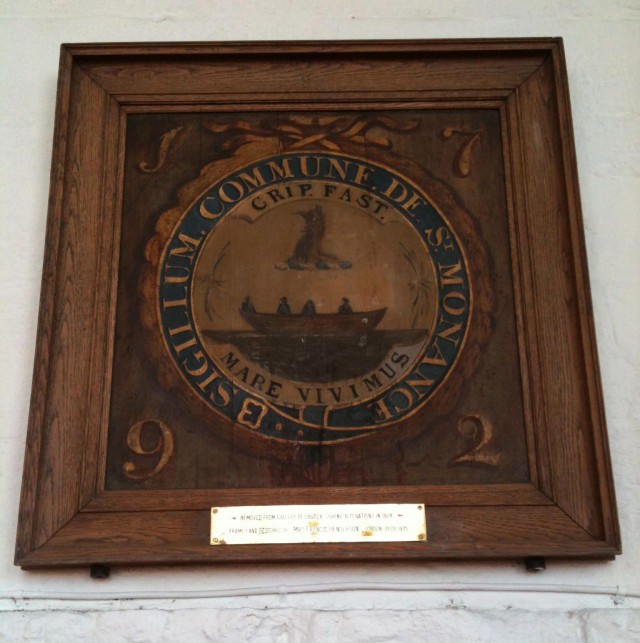 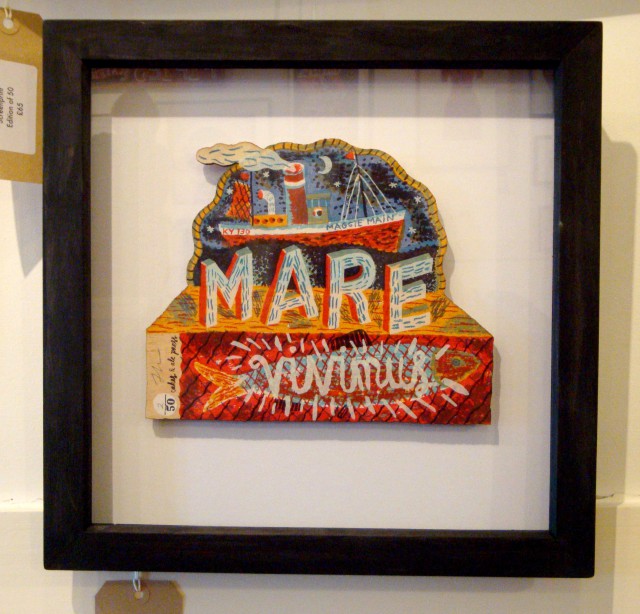 Being on the Fife coast, I started collecting work together, that like my art wall in Kensington Place, would be largely inspired by the sea. 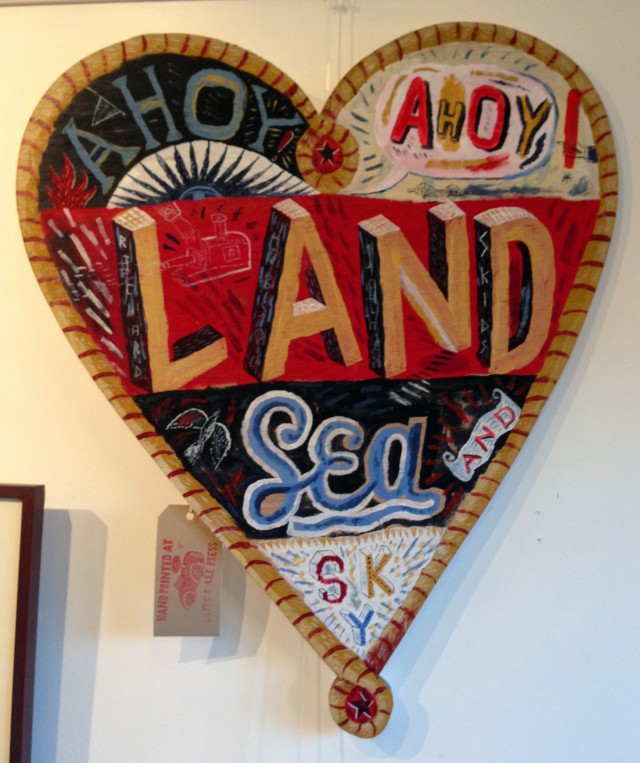 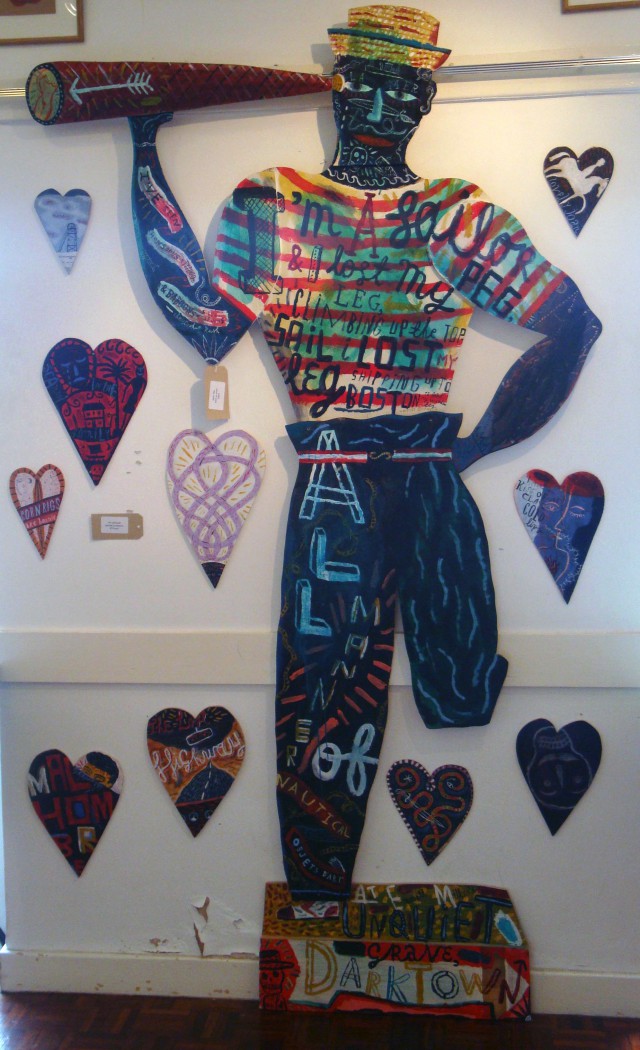 So I was once more in my studio, cutting up bits of genuine driftwood from Wickes into fish, boat and heart shapes. And some new prints appeared too. I had two main sources of inspiration on my journey up to the kingdom (Dunfermline in Fife, my home town, used to be the capital of Scotland). I’d been reading Christopher Rush’s A Twelvemonth And A Day and I’d been listening obsessively to the songs of Kenny Anderson, better known as King Creosote. 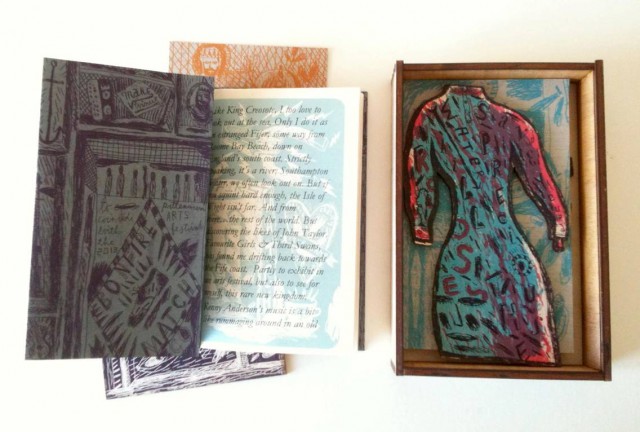 I also felt an urge to do some sort of new publication, so I decided on a wee box set of prints based around KC’s music. I asked one of the technical staff at the college where I teach if he could make me 20 domino boxes. He said he could, with the help of the lasercutter. So I then started to draw, 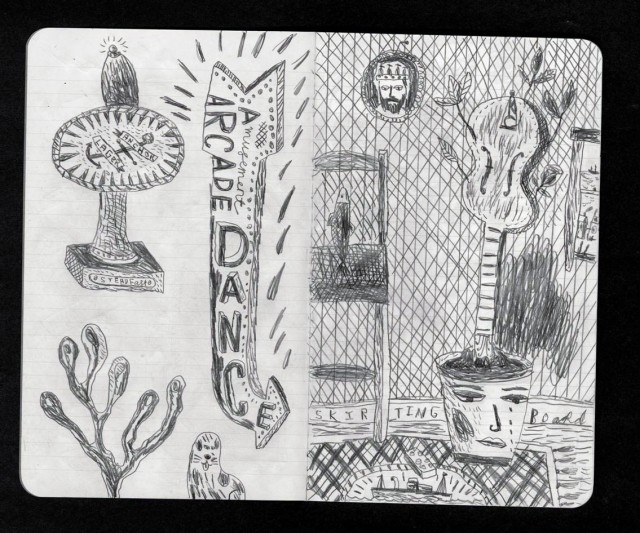 with only my new propelling pencil and a Moleskine sketchbook – lined, for a change, and began to take bits of lyrics from here and match them with images from there. 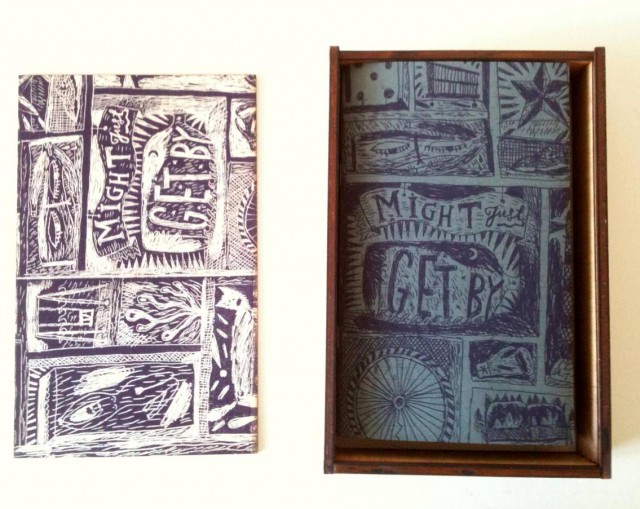 Two weeks later, just in time for the festival, I had Might Just Get By, a box of delights and a homage to the King. I’d emailed him in advance of all this, but was a bit nervous as to what he’d think of it all. He was delighted, and especially enjoyed my ‘essay’ in the wee book…

Kenny Anderson’s music is a bit like rummaging around in an old bureau, or a chest of drawers in a dresser. With lots of darkened corners & tiny hidden cupboards. It’s jam packed with objects & scraps of paper, with half said thoughts & everyday tales. So commonplace they become extraordinary. It’s a miscellany, a gallimaufry, that when inspected closer gradually becomes a whole. A mass of happenings. Components that are leftovers from a Haynes car manual for some unknown, time machine.

And in the kingdom of King Creosote, there’s a high street with a cluster of shops. That coffee shop that only gives out written receipts. A ship’s chandlers for those who sail on The Reaper. And for John Taylor, of course. On one of the corners there has to be a bike repair shop. I’m not entirely sure why, but not all has to make sense in Creosoteville. Open, always ready to mend the odd puncture. Remove or add links in chains, to keep the repaired wheels turning. Fixing the brake cables, with frayed ends, leading to accidents when they snap altogether. The bikes are repaired best as they can be. But in some of the songs, you get the feeling that it’s just as well to buy a new bike altogether, should the money be there. And if it isn’t, Shank’s Pony, or an old Vauxhall Chevette will do. 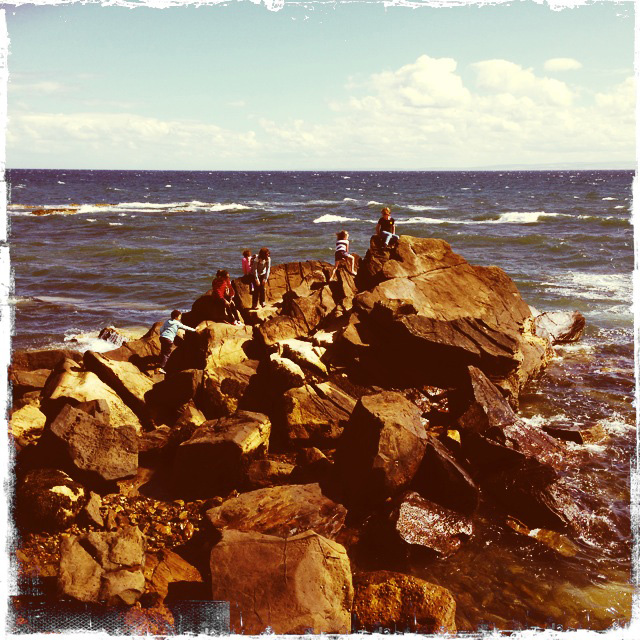 So when in Fife, I must get us all in a boat of some kind, to explore the nooks of the Neuk. Relive my school summer trip to Crail, where Donald Wilson fainted & was bought a Dandy by the teacher. I’d faint any day for that, but of course, it’s now too late. In the intervening years, much has changed. Silver sideburns have appeared, as have third party insurance claims. The best we can do, I think, is follow the King’s advice, & hope that we might just get by… 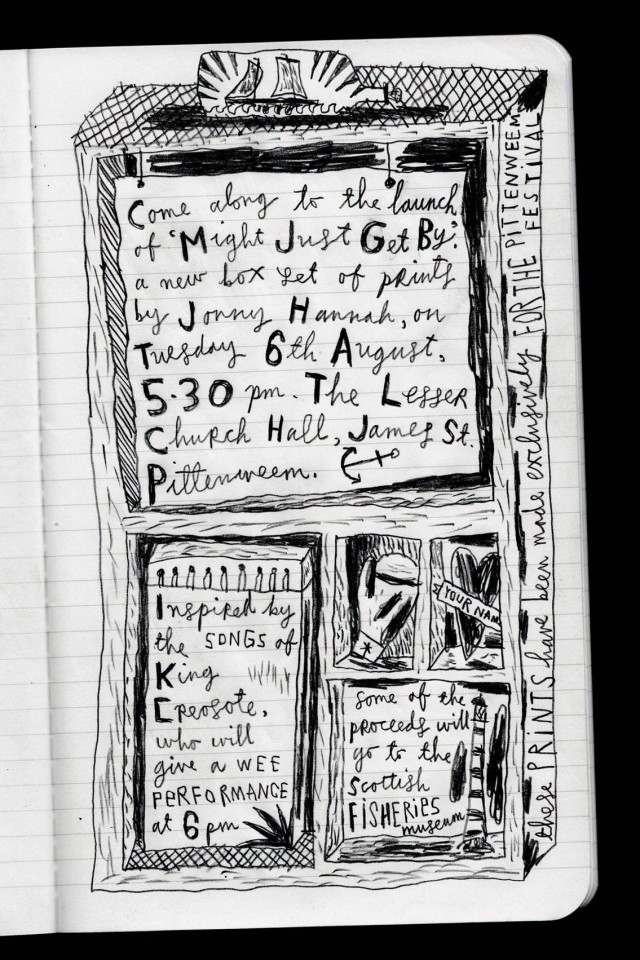 We decided on a wee launch of the box set for the Tuesday evening, in the old church hall where my exhibition was, and I nervously asked him if he’d play a few songs. He said no problem, so for half an hour we all stood, a packed hall, and enjoyed treat after treat from Kenny. After that, we all went to one of two pubs in Pittenweem and drank far too much Tennent’s lager, but that’s another story. 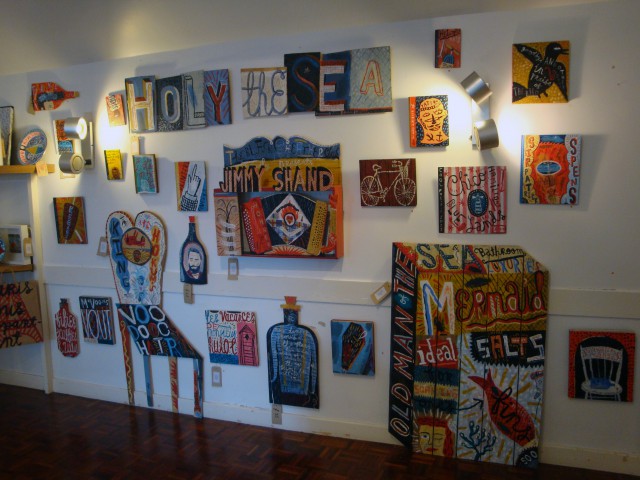 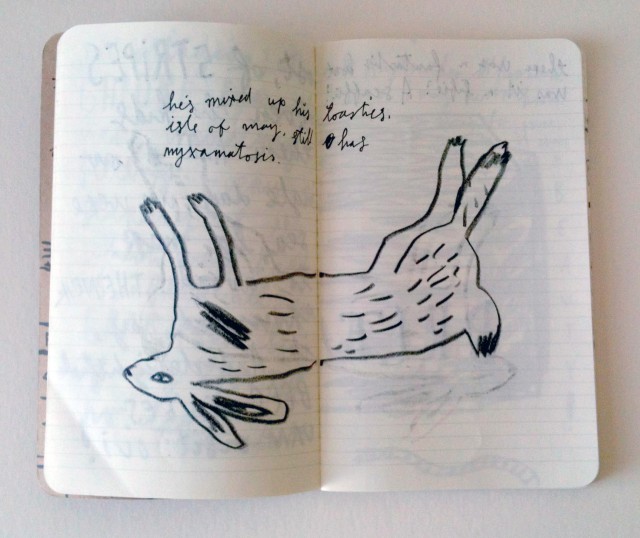 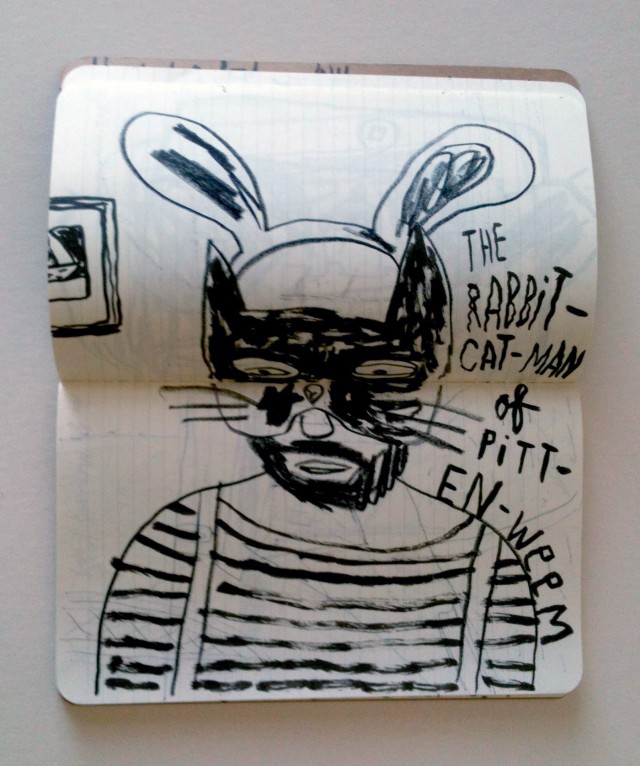 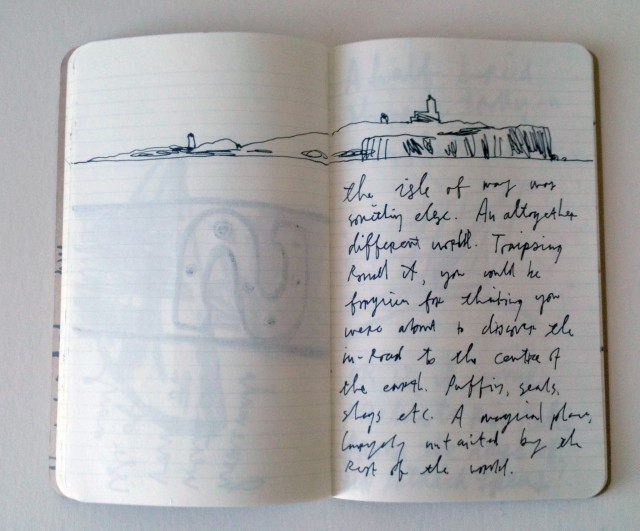 So, all in all, we had a smashing time. A working holiday in sunny Fife, which even included a boat trip to the Isle of May, where there were puffins, dead rabbits and not one, but two lighthouses.

So, if you’re free for a week next August, then get yourself along to Pittenweem, to see some great art by people like Susie Lacome, Hilke & Ian Macintyre, Susan McGill and many others. And who knows, maybe King Creosote will be playing John Taylor’s Month Away somewhere amidst it all.