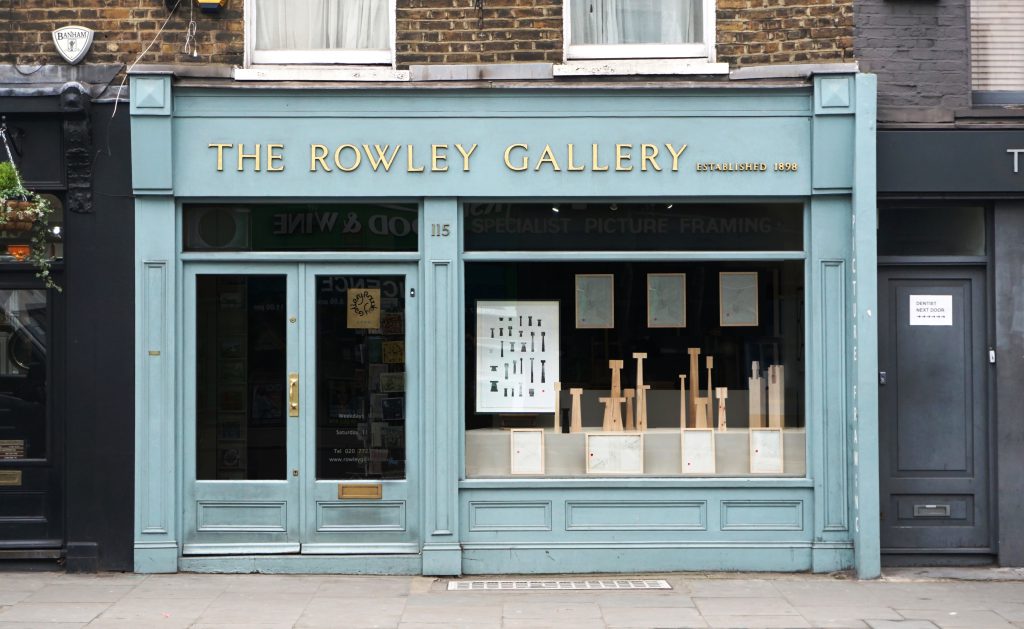 A Rowley Gallery window by Emi Shinmura, a memento of her time spent in Japan, learning about traditional carpentry, cutting joints and making sculptures, absorbing the spirit of the forest. 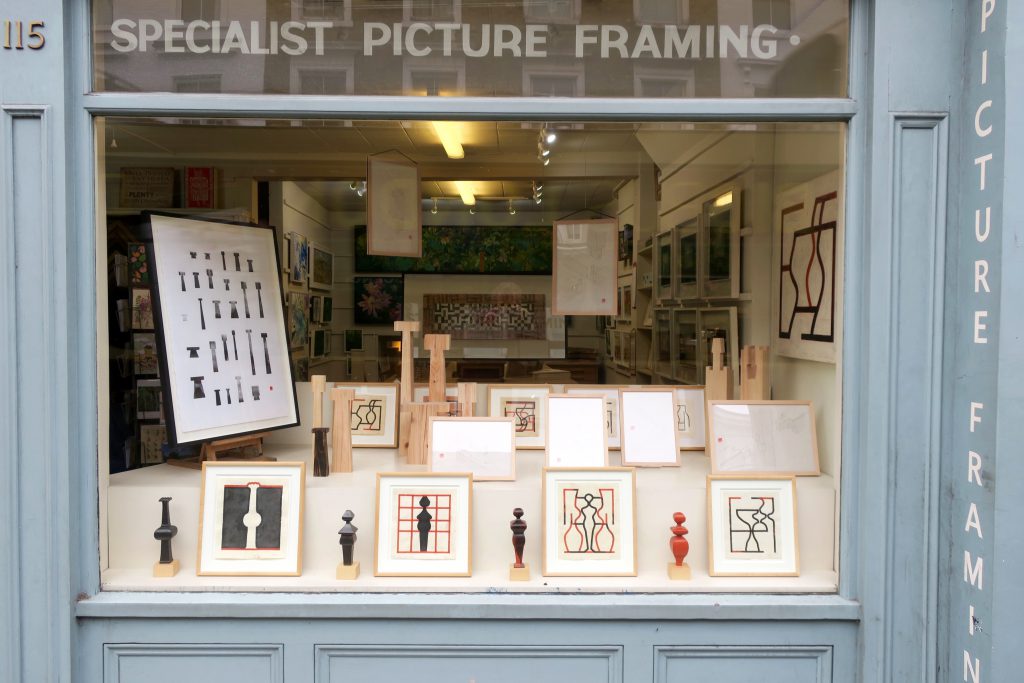 It’s a window of changes, sometimes accompanied with some of my drawings too, and sometimes without. Eventually we settled on a compromise, a balance of connections and similarities. 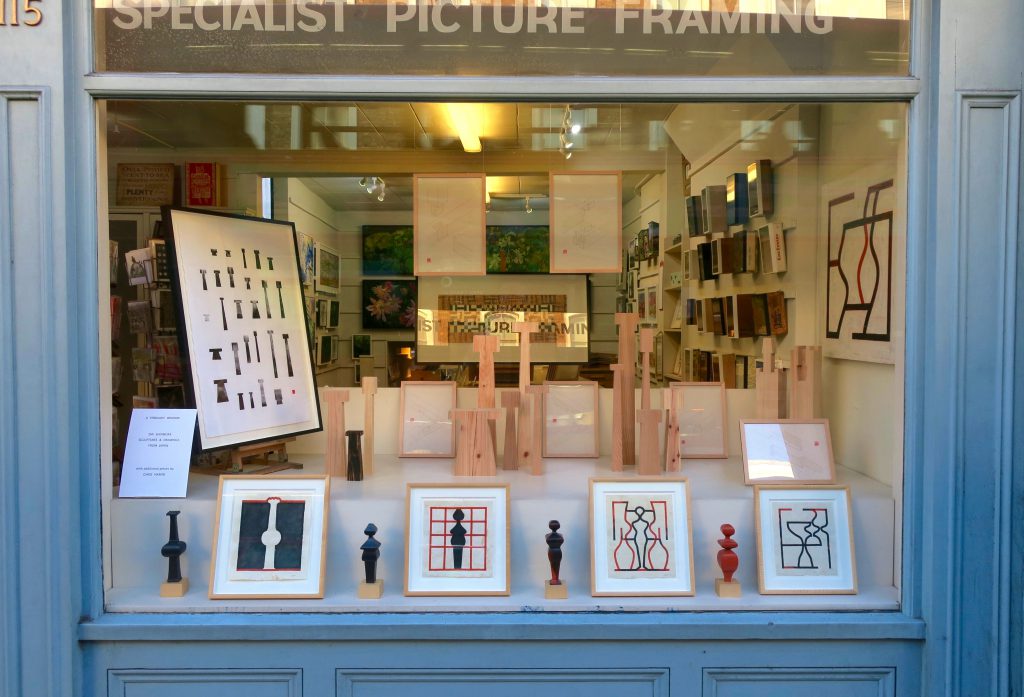 It’s a display of Emi’s Kokeshi sculptures, supplemented with four of my Double Figures. 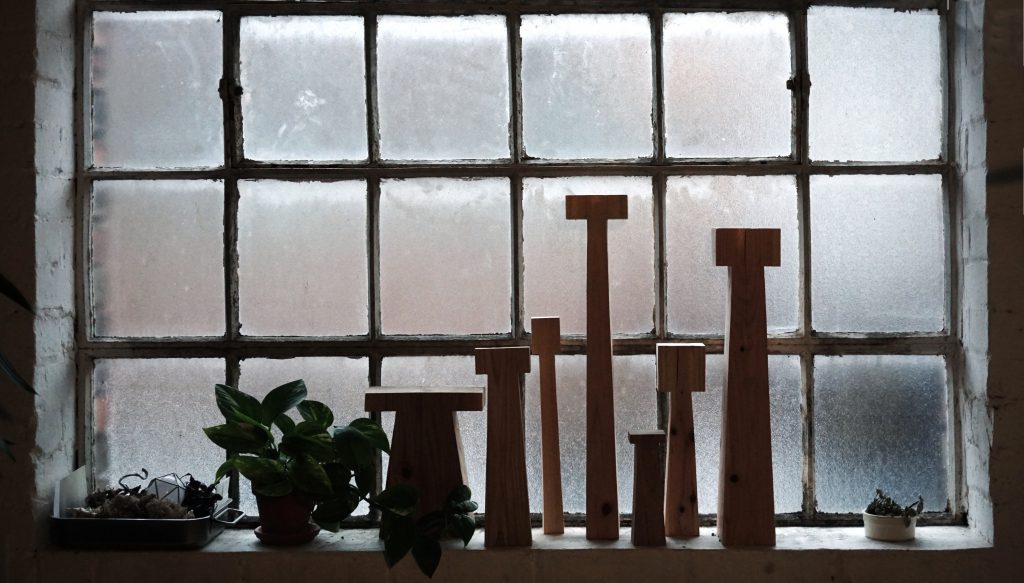 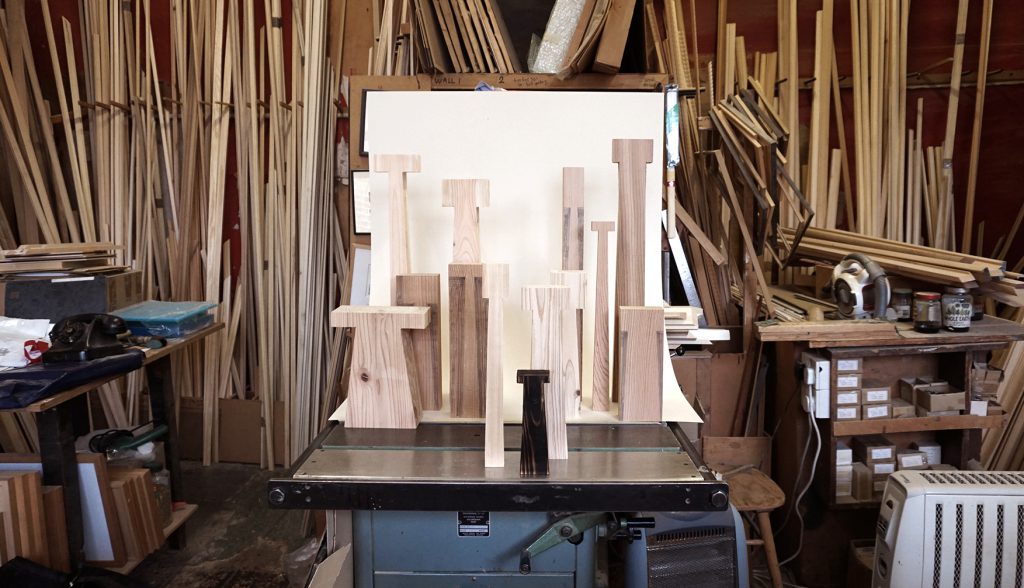 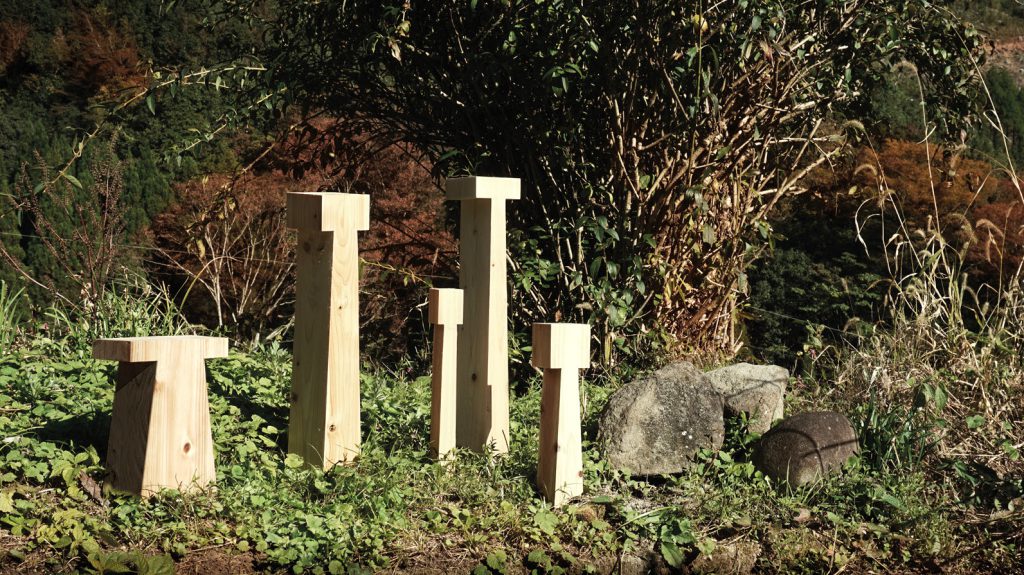 This is the name my carpenter aunt would affectionately call the sculptures that I gradually began to populate her wild garden with in the depths of the northern Kyushu mountains.

I have left some in moist crevices in the garden hoping the moss will overcome them, in much the same way moss covers wooden grave posts in cemeteries in Japan. Kokeshi have been associated with guarding the souls of children, although they are now primarily seen as a decorative art form. I wanted to create a group that characterises human individuality whilst celebrating our commonality and oneness with nature.

Without the need for painting human features, I’ve found character in altering the ratios of this very simple geometry: a rectangle on top of a trapezium – in contrast to the traditional Kokeshi dolls which are cylindrical with a round head.

This idea stemmed from a small off-cut that fell one day from cutting a half-lap-dovetail joint for one of the foundation beams of the house we were building. Finding the composition of the off-cut pleasing, I saved it from the firewood box and placed it on the workshop window sill for a couple of weeks. Seeing it every day, I then composed groups of characters to harmonise with and complement the original piece.

The Kokeshi have been made with cypress and cedar woods, echoing the materials of traditional Japanese dwellings. As with the construction of columns, each character has been sawn, planed and chiselled so that it remains standing in the direction in which it grew. By arranging them in accordance with the north-south orientation in which each tree grew, a harmony and dialogue comes into being that I could not have achieved alone. 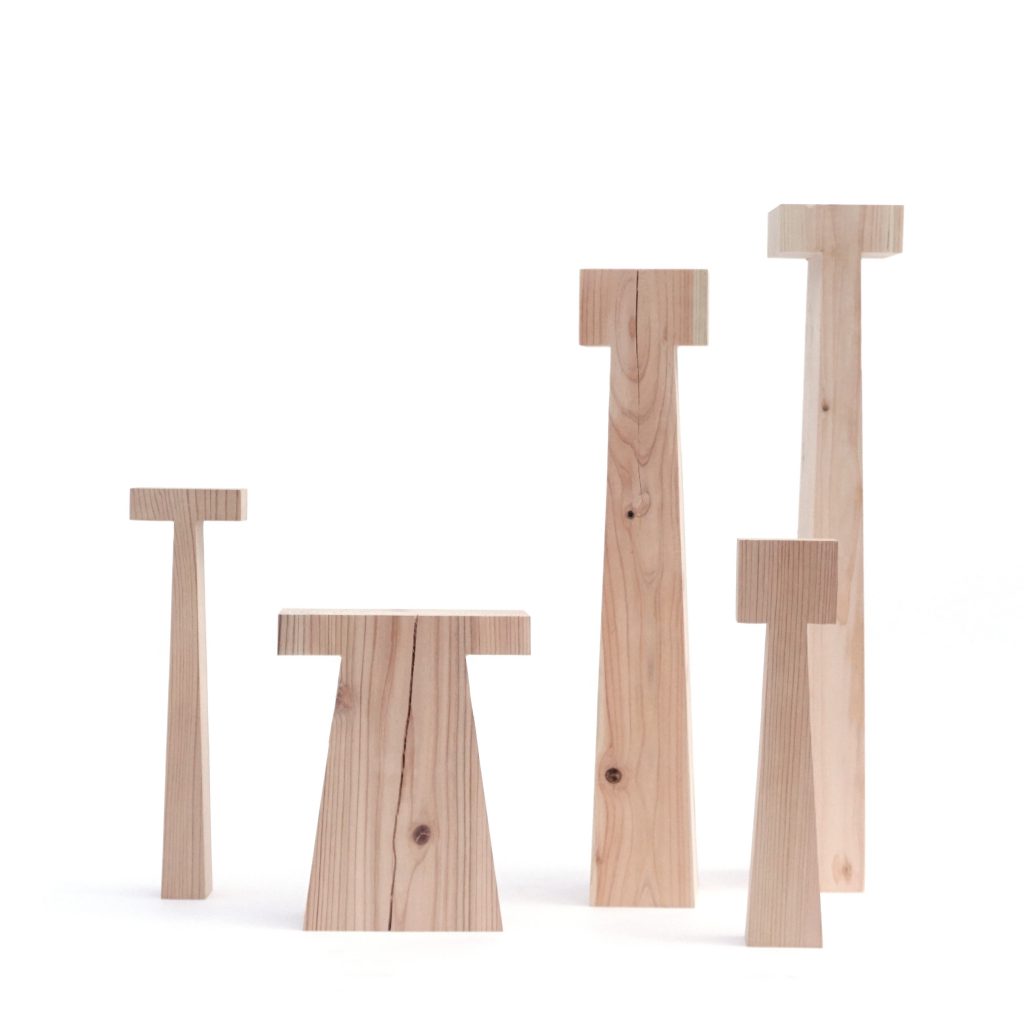 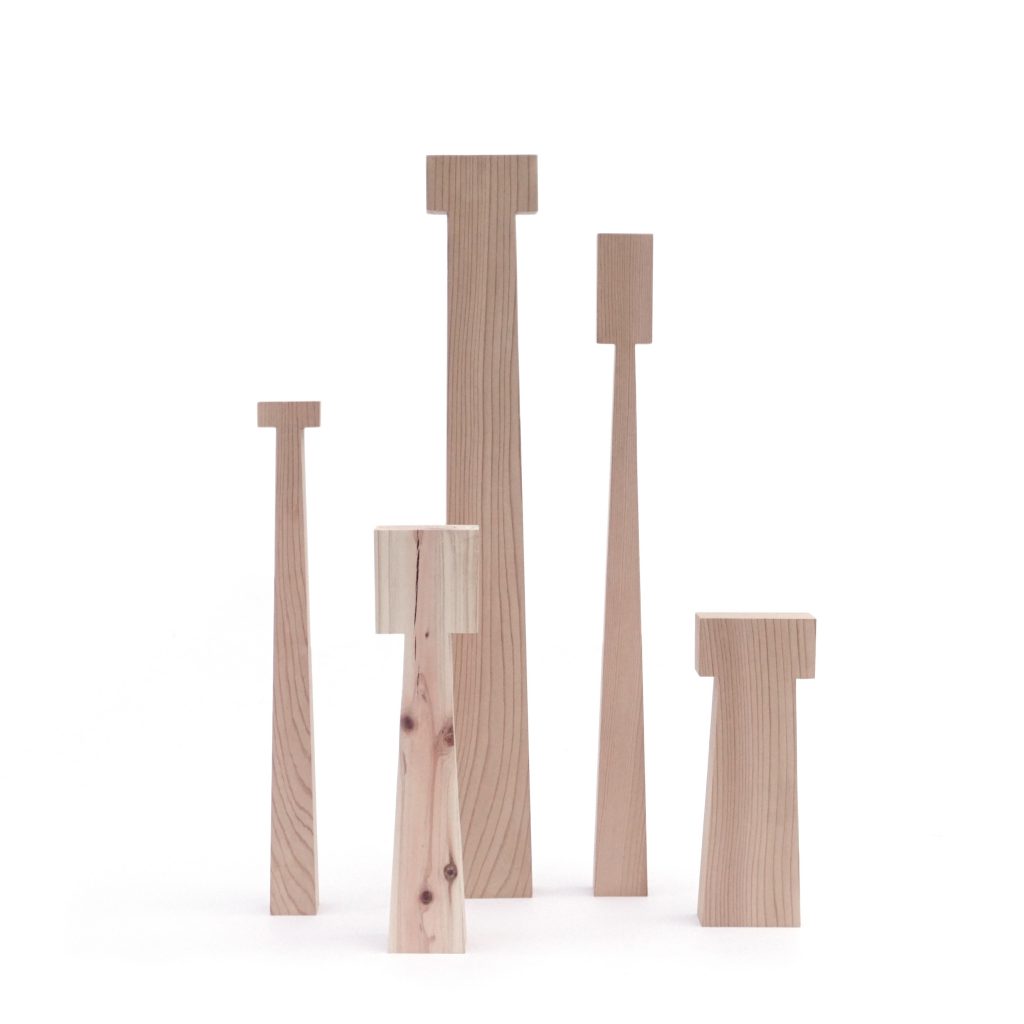 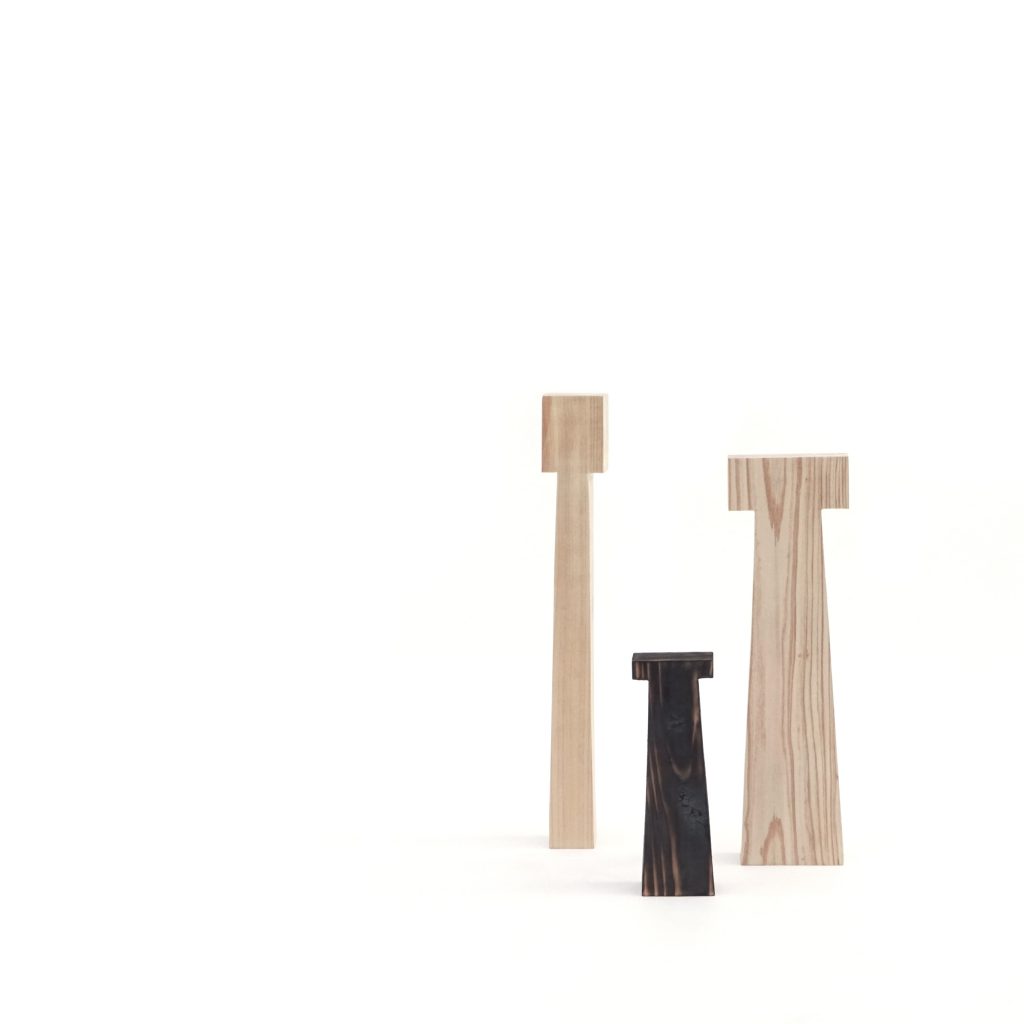 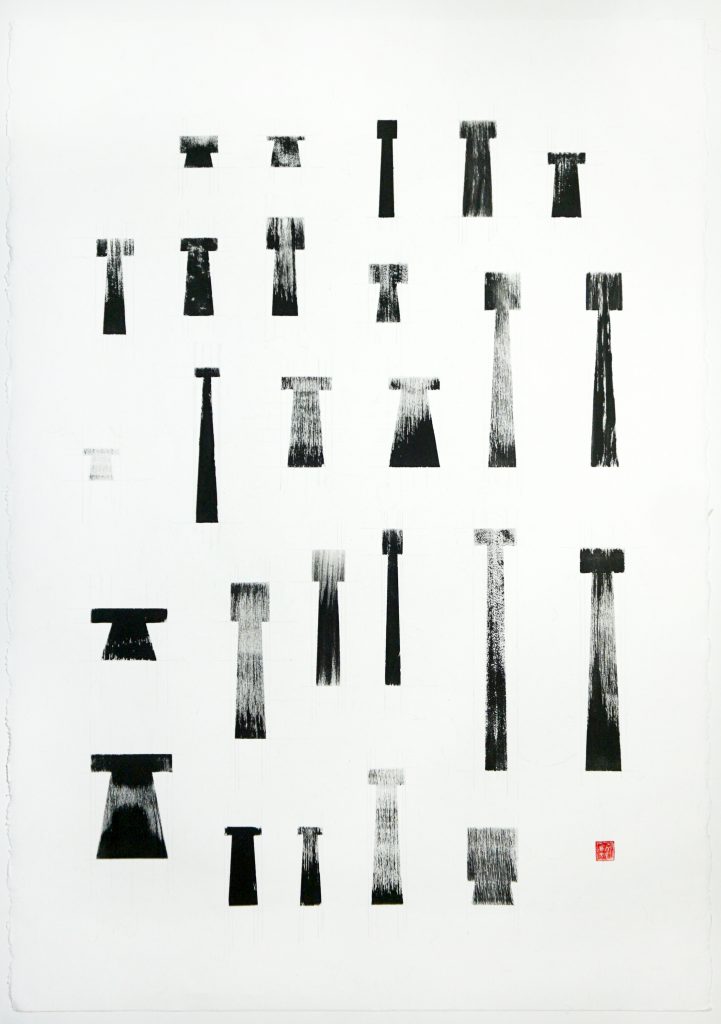 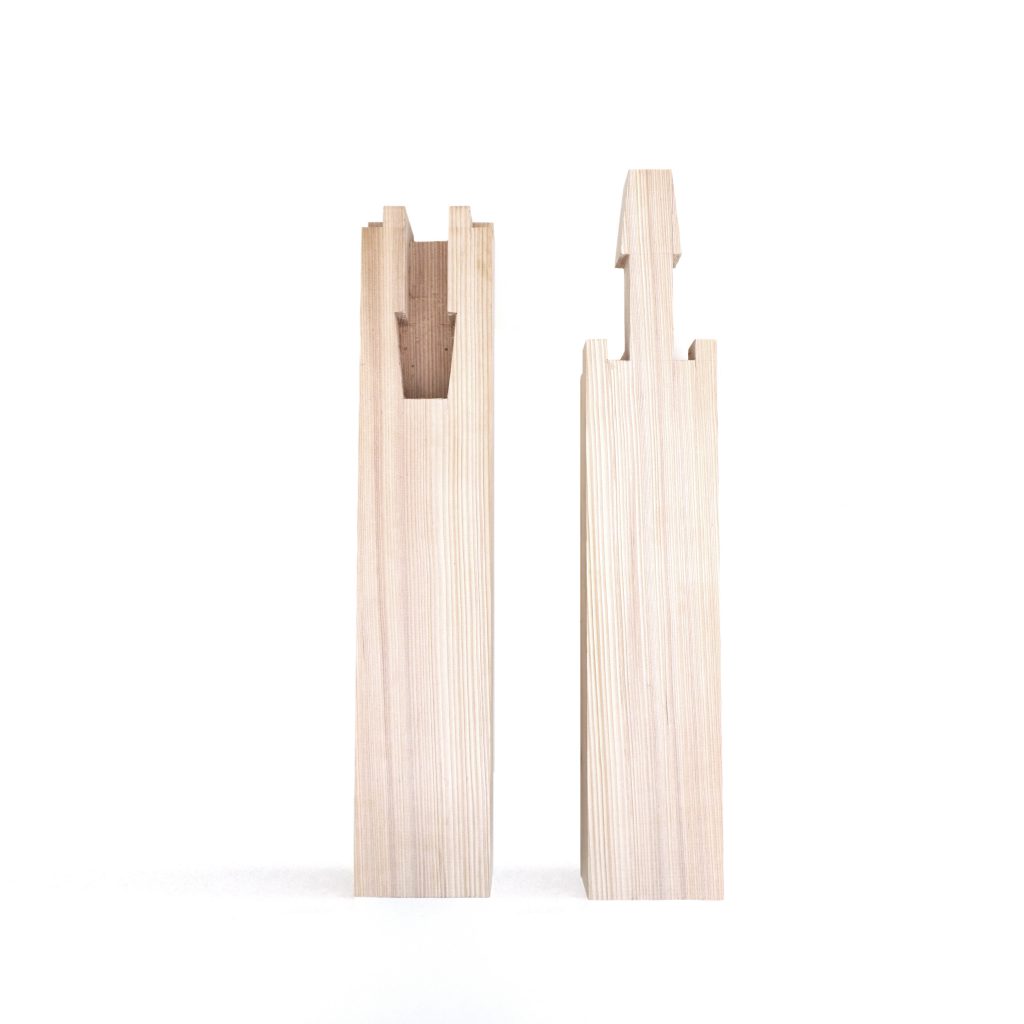 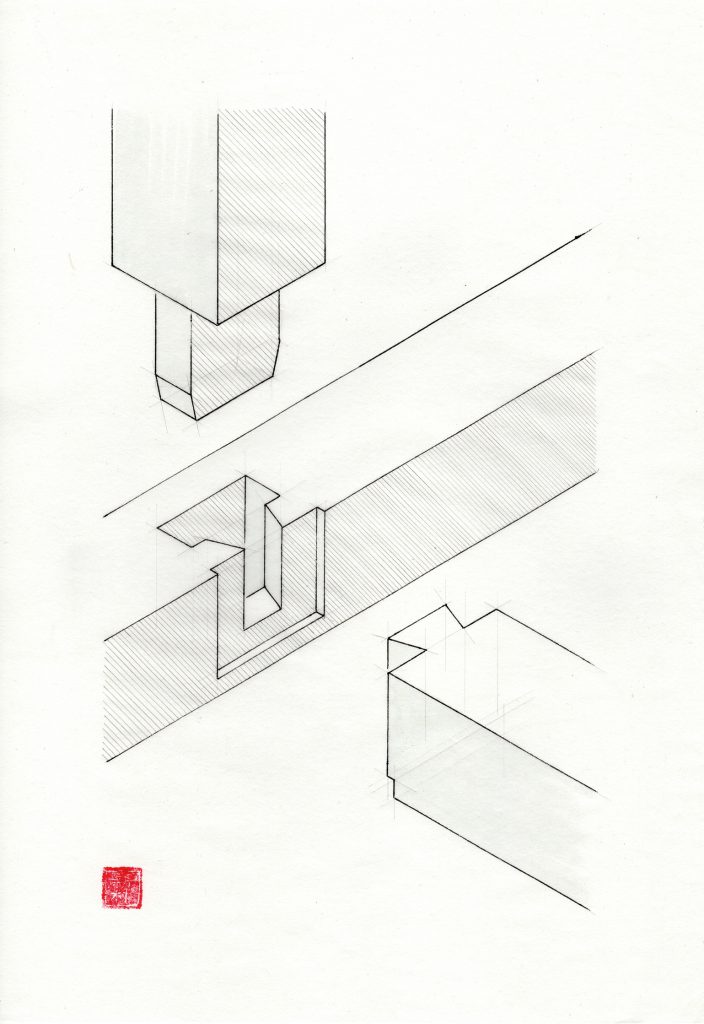 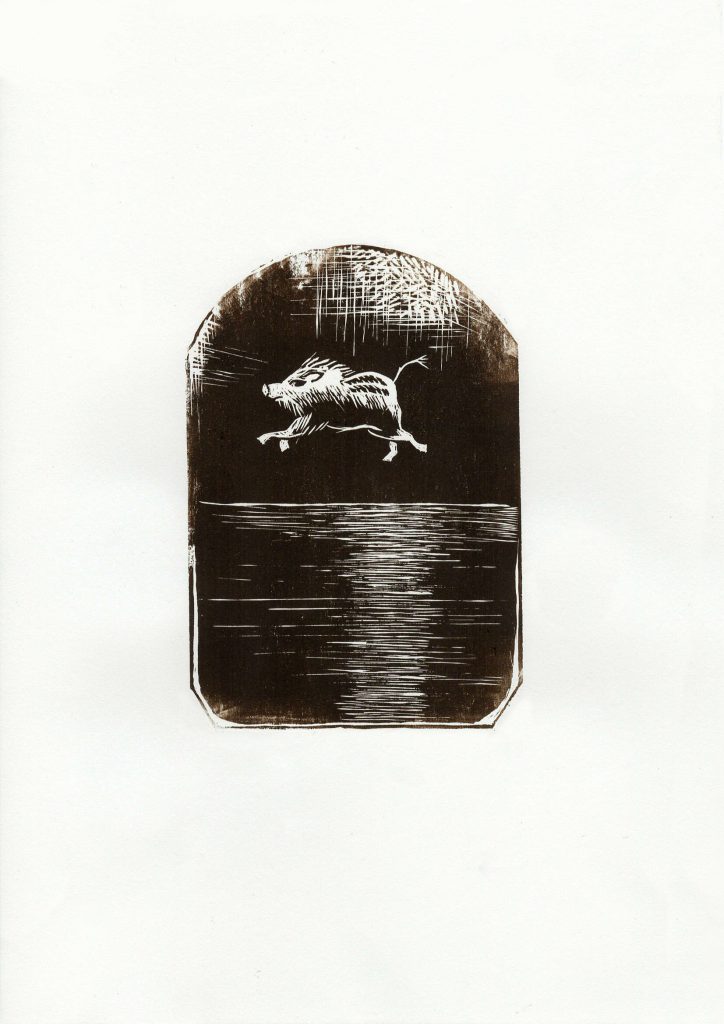 There’s also a series of Emi’s woodblock prints displayed inside the gallery. This one depicts an image of a wild boar leaping in the moonlight, engraved onto the blade of a traditional Japanese hand-plane. 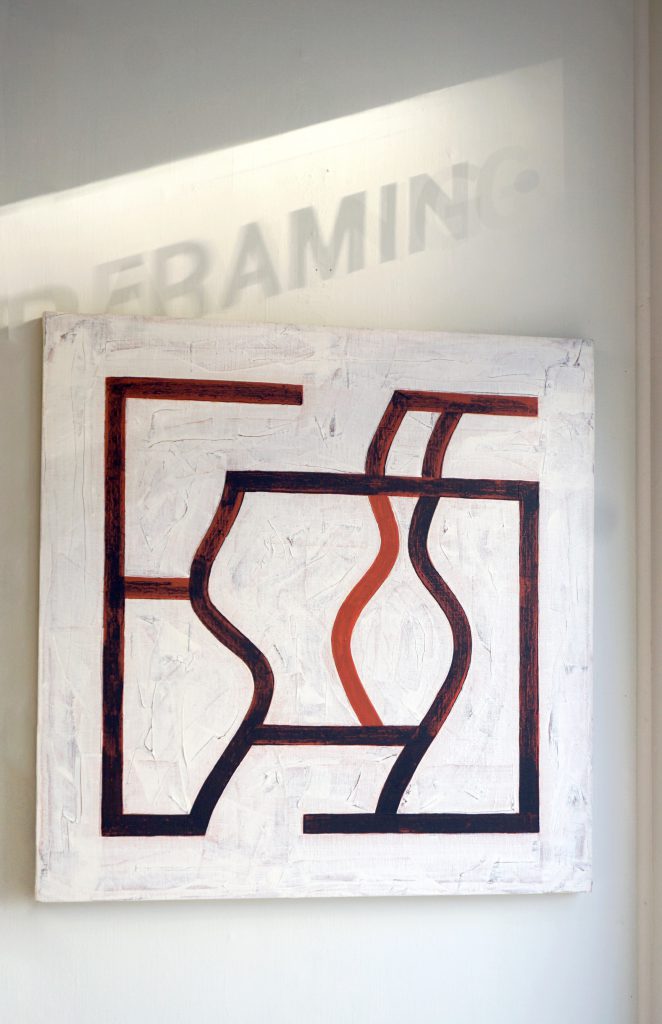 There’s one of my paintings on the wall 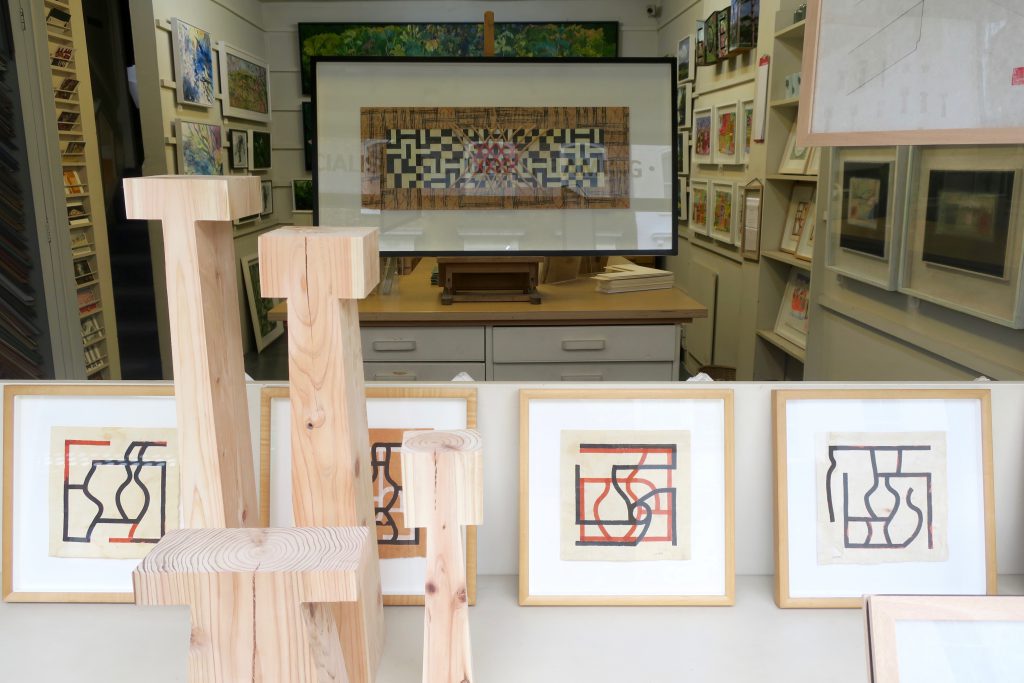 and a few related drawings 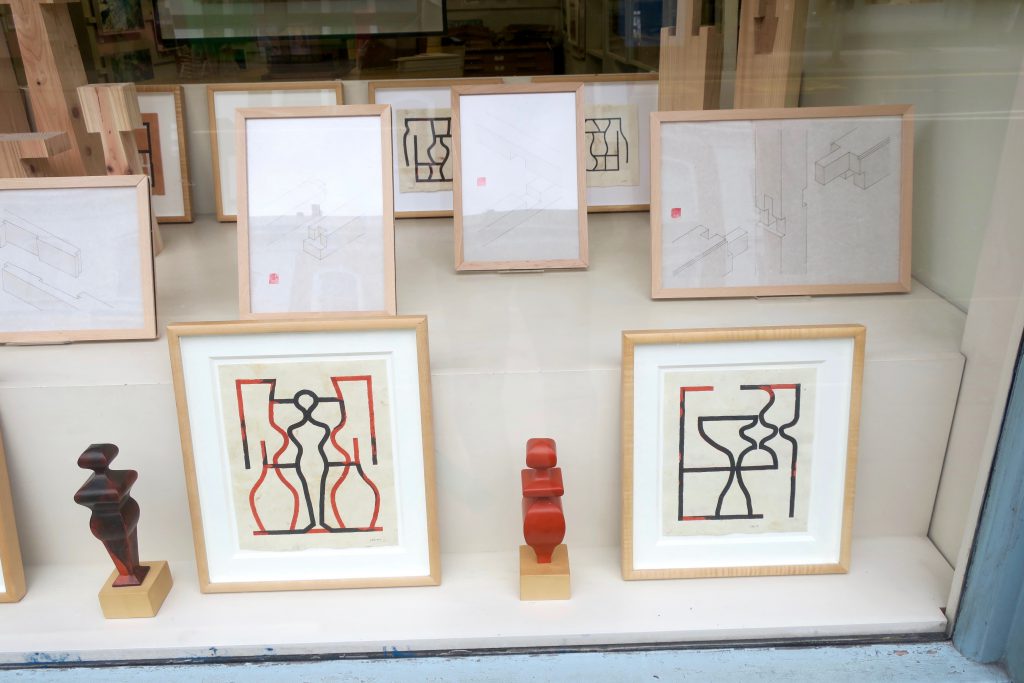 and some figurines. And like Emi’s Kokeshi, they were also inspired by off-cuts. They were pieced together from quadrants of picture-frame mouldings, painted with gesso and washed with varying layers of orange and black, and then burnished. They are creatures from the same invisible forest. 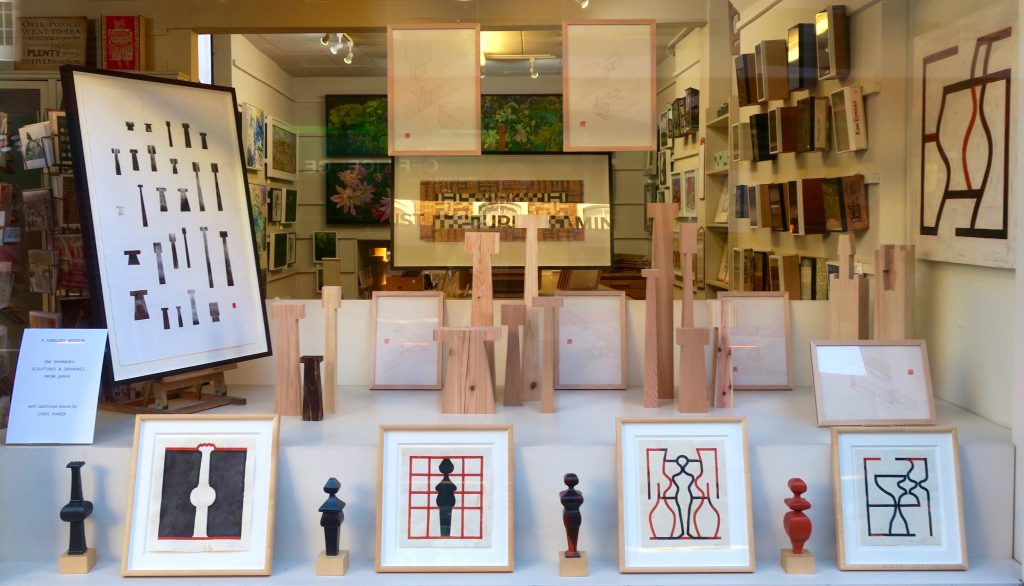 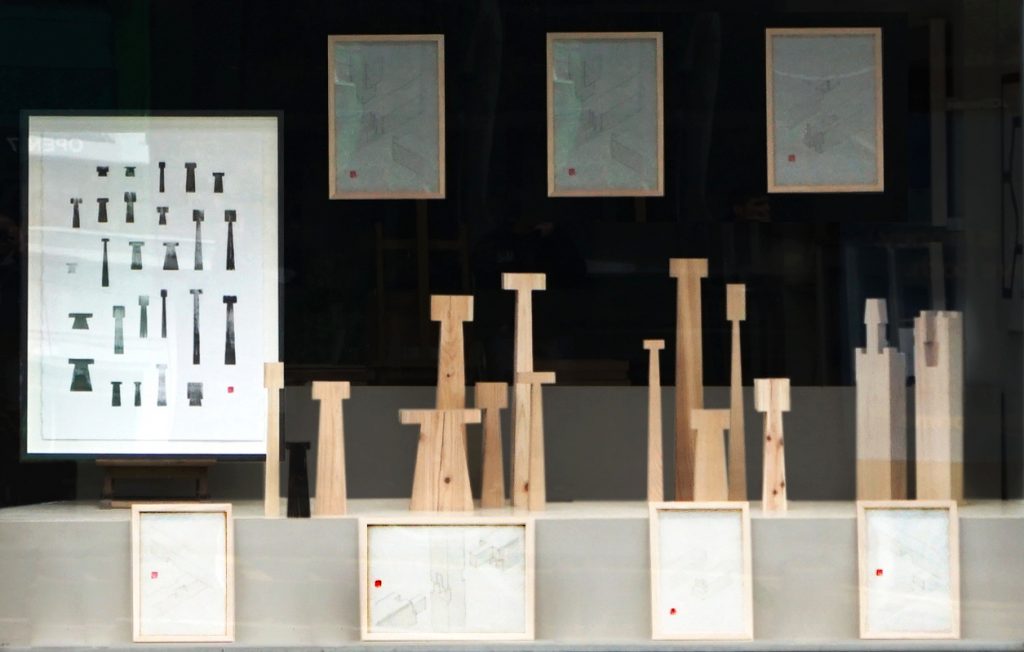 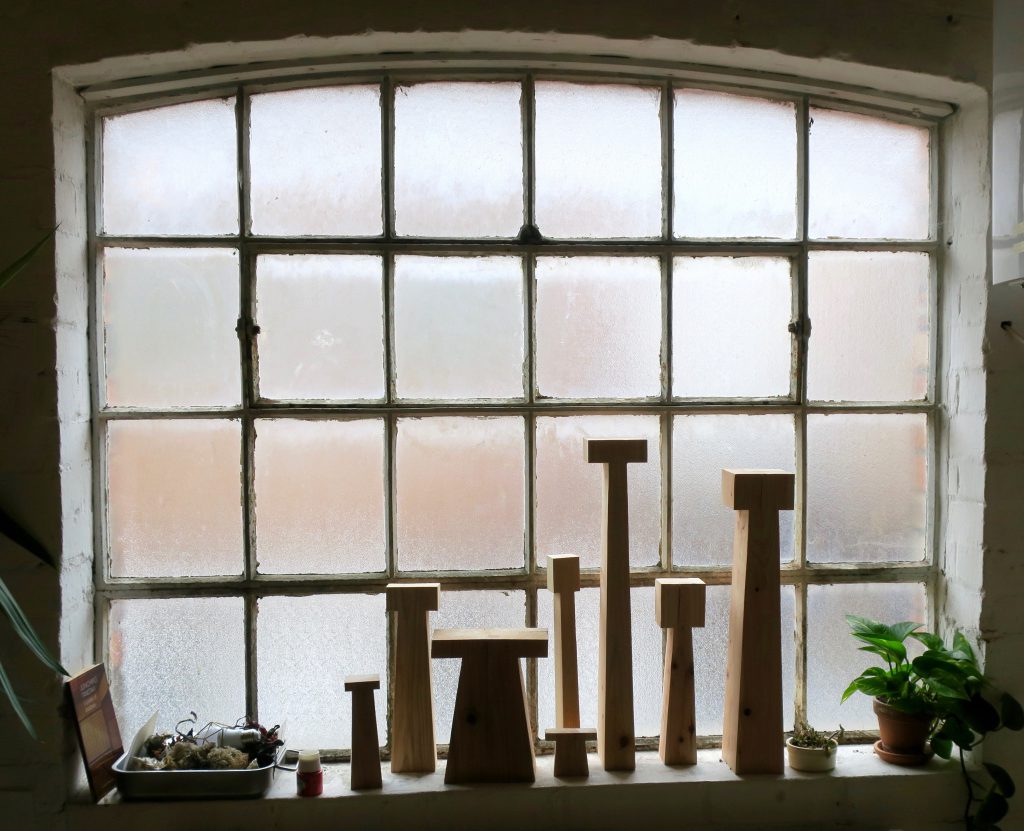 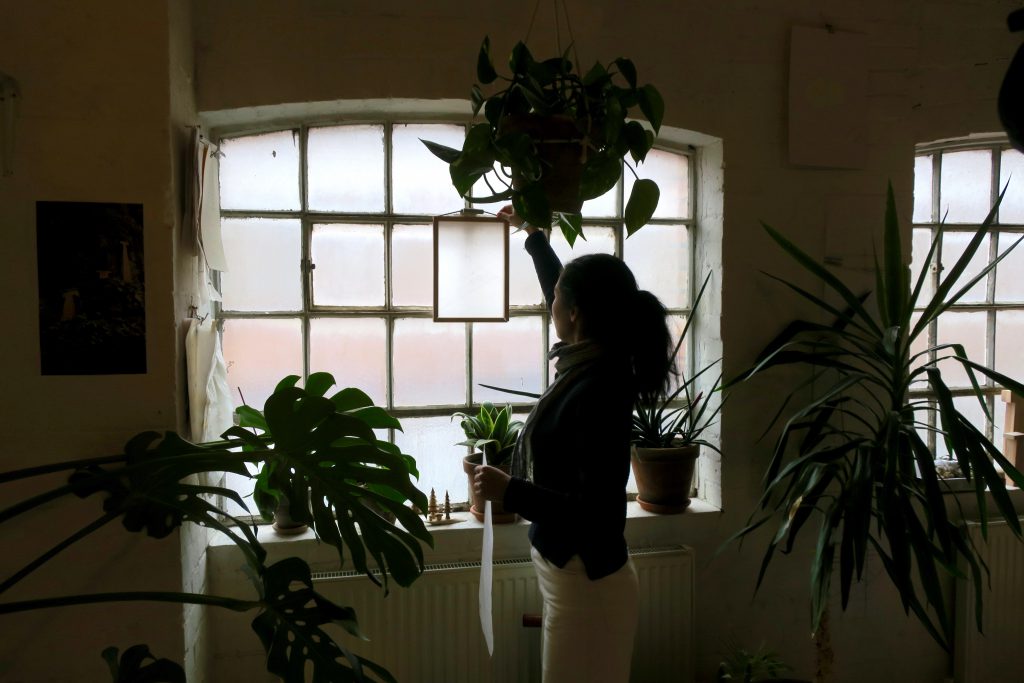