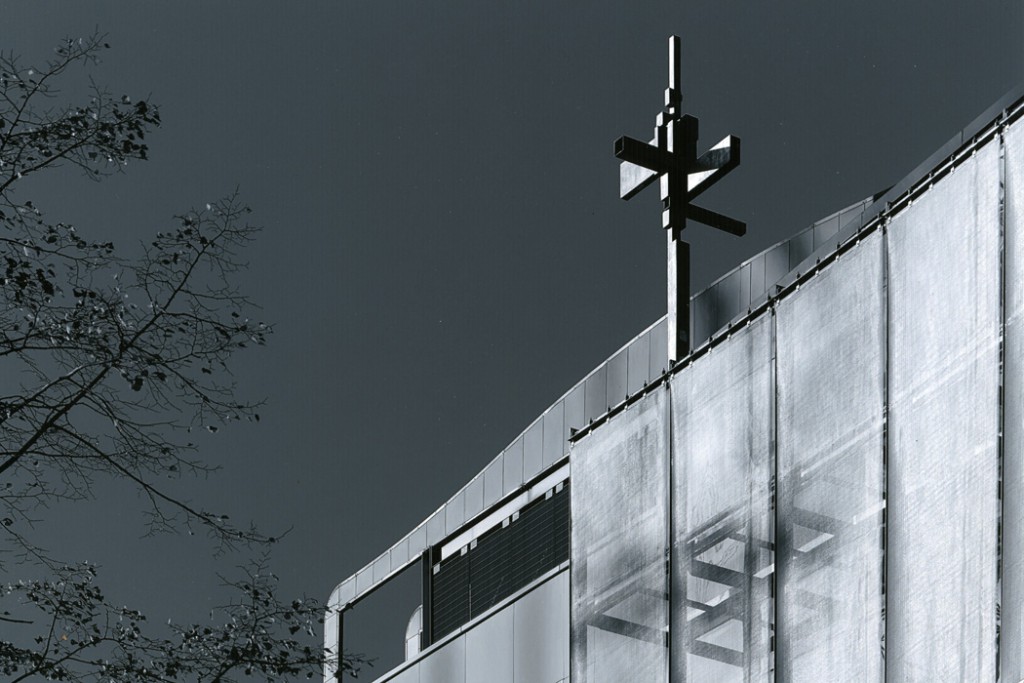 Once a term Holland Park School ask us to frame the cover of their school magazine. Most recently it featured a photo of Antony Gormley to mark the arrival of a specially commissioned sculpture on the school roof. This was a great surprise, and a nice coincidence, just as I was drafting the previous post about his exhibition last year in Florence. 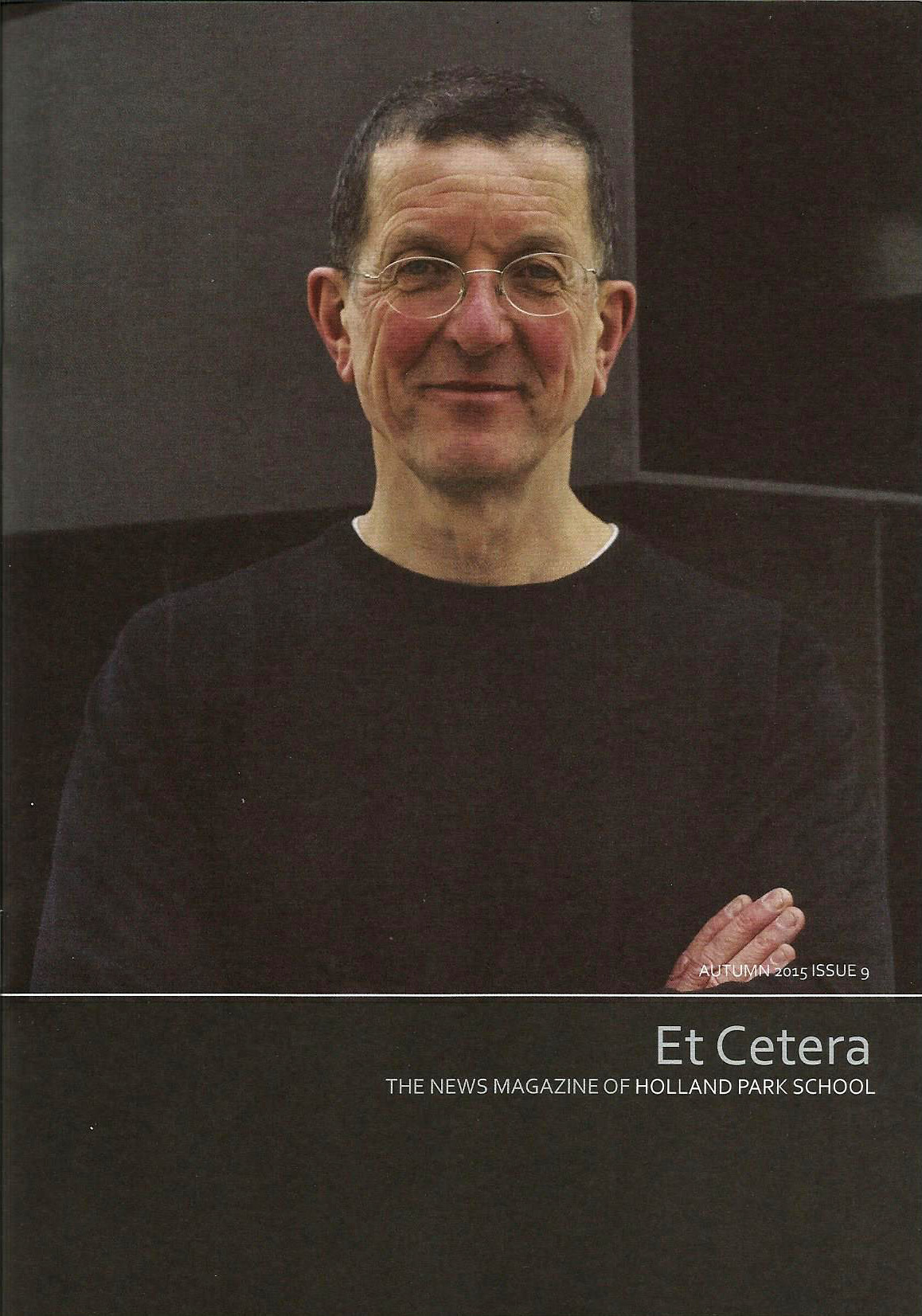 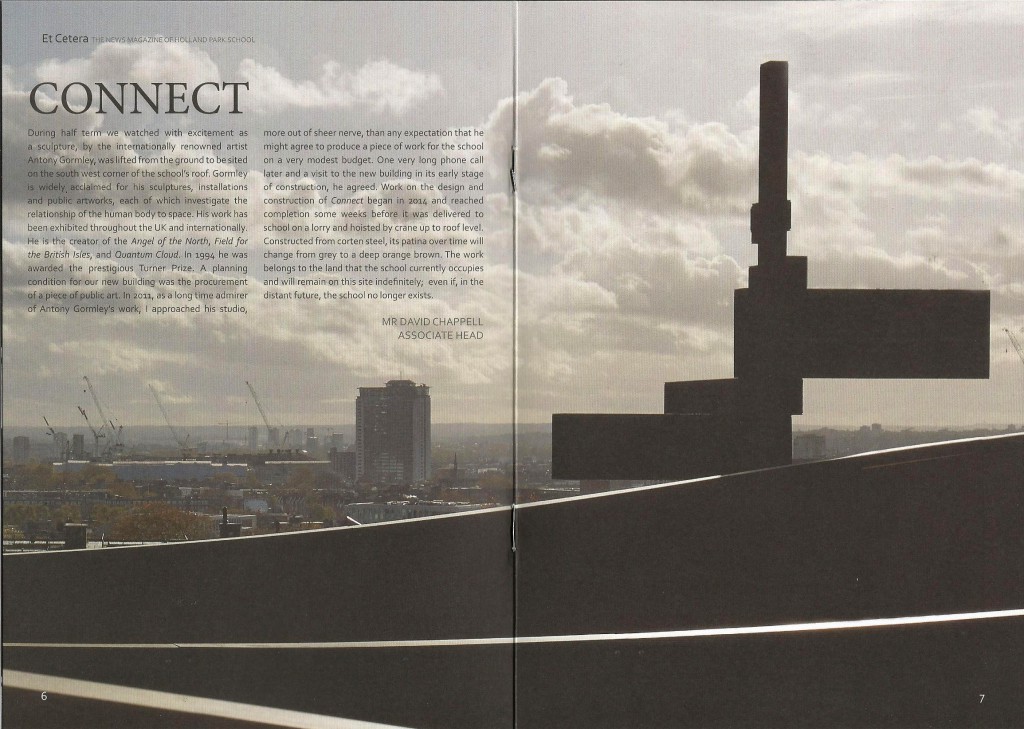 During half term we watched with excitement as a sculpture, by the internationally renowned artist Antony Gormley, was lifted from the ground to be sited on the south west corner of the school’s roof. Gormley is widely acclaimed for his sculptures, installations and public artworks, each of which investigate the relationship of the human body to space. His work has been exhibited throughout the UK and internationally. He is the creator of the “Angel of the North”, “Field for the British Isles”, and “Quantum Cloud”. In 1994 he was awarded the prestigious Turner Prize. A planning condition for our new building was the procurement of a piece of public art. In 2013, as a long time admirer of Antony Gormley’s work, I approached his studio, more out of sheer nerve, than any expectation that he might agree to produce a piece of work for the school on a very modest budget. One very long phone call later and a visit to the new building in its early stage of construction, he agreed. Work on the design and construction of “Connect” began in 2014 and reached completion some weeks before it was delivered to school on a lorry and hoisted by crane up to roof level. Constructed from corten steel, its patina over time will change from grey to a deep orange brown. The work belongs to the land that the school currently occupies and will remain on this site indefinitely; even if, in the distant future, the school no longer exists. 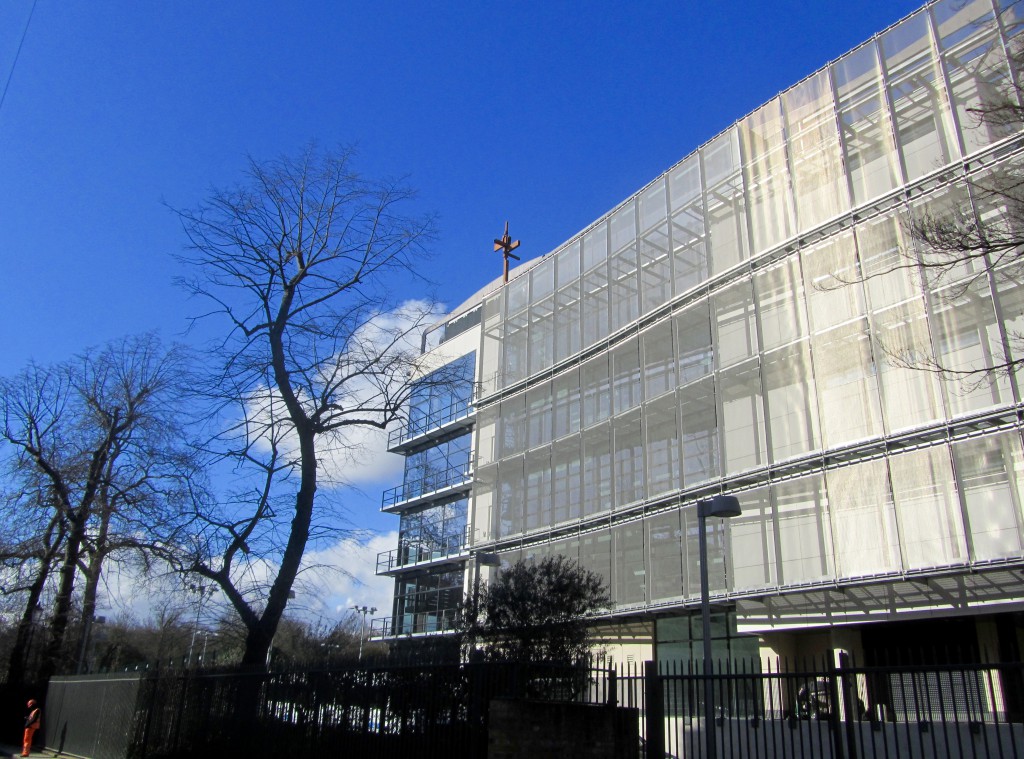 How fantastic to suddenly have an Antony Gormley sculpture on our doorstep, on their rooftop. I had no idea. I hadn’t even realised we were framing his photo until the school secretary came to collect it. I’d made the frame but without knowing what went into it. When I saw it I asked why was he on the cover of the school magazine? Answer: Because he put a sculpture on the school roof! 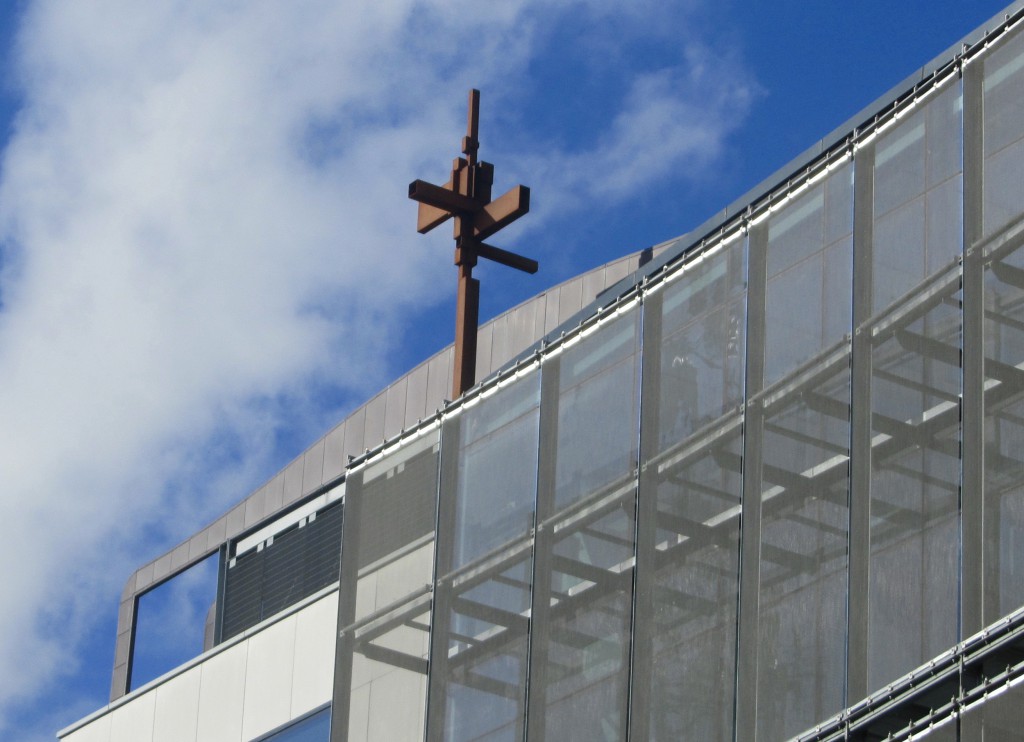 I had to see this for myself. I assumed it must be a life-size bodycast or perhaps one of his pixilated figures, but it turned out to be neither. This was something special. At first glance it’s a fingerpost, apparently comprised of giant USB sticks. But on closer inspection a human figure appears at its centre, with connections north, south, east, west. Also above and below. He’s very well connected. 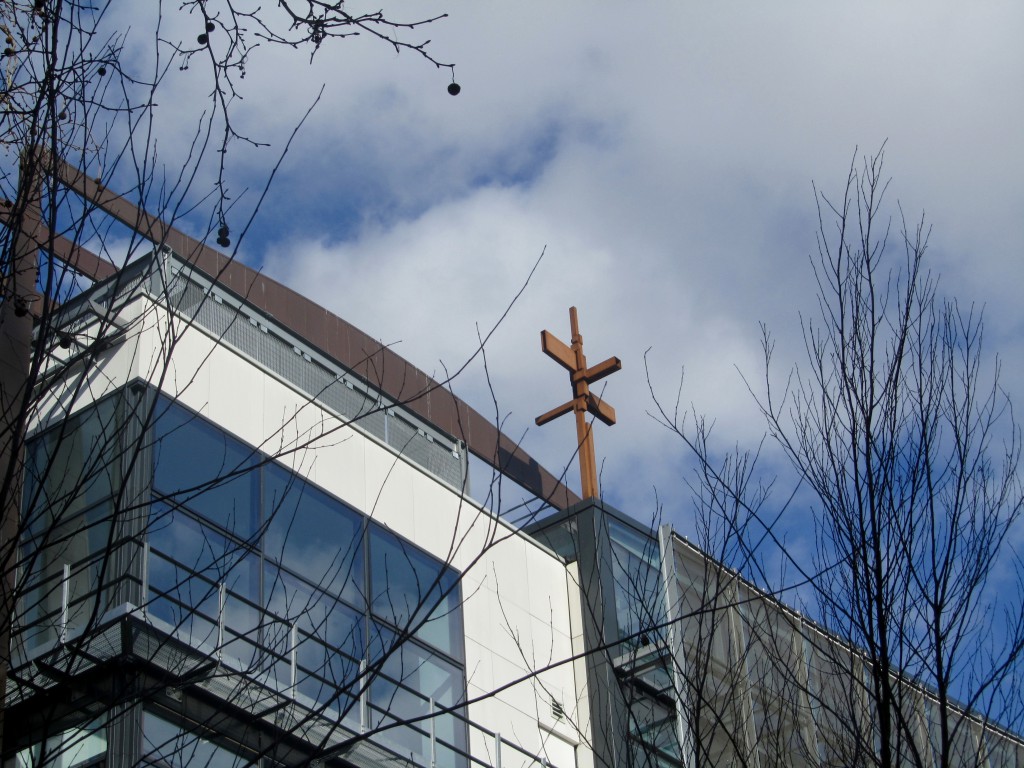 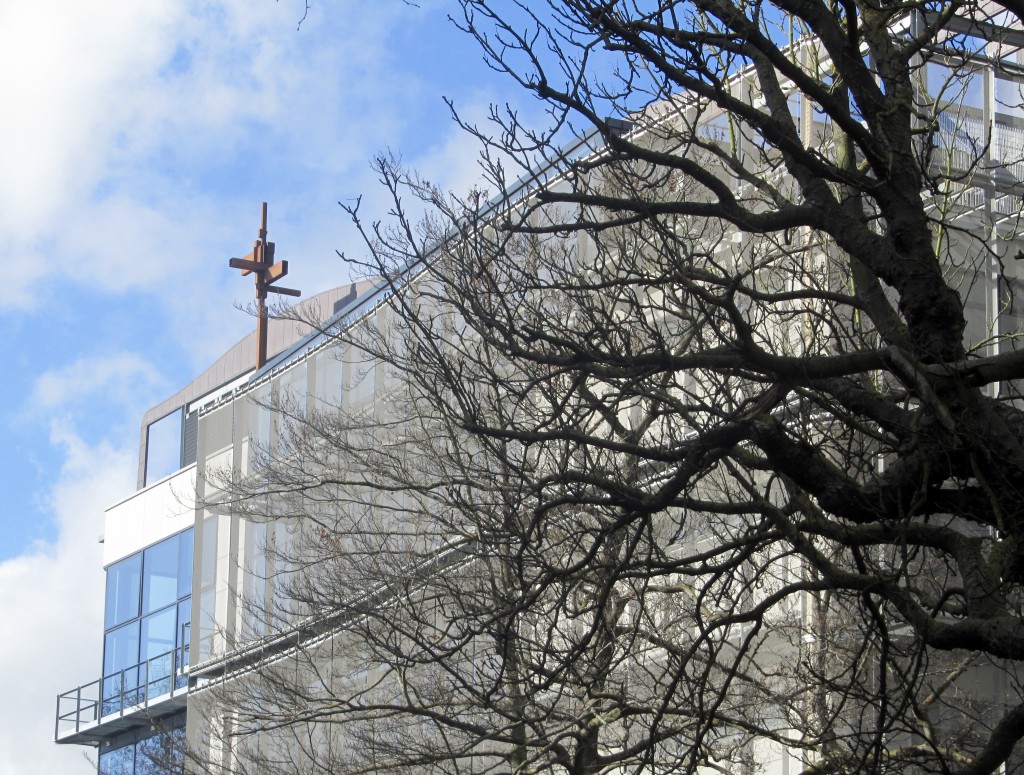 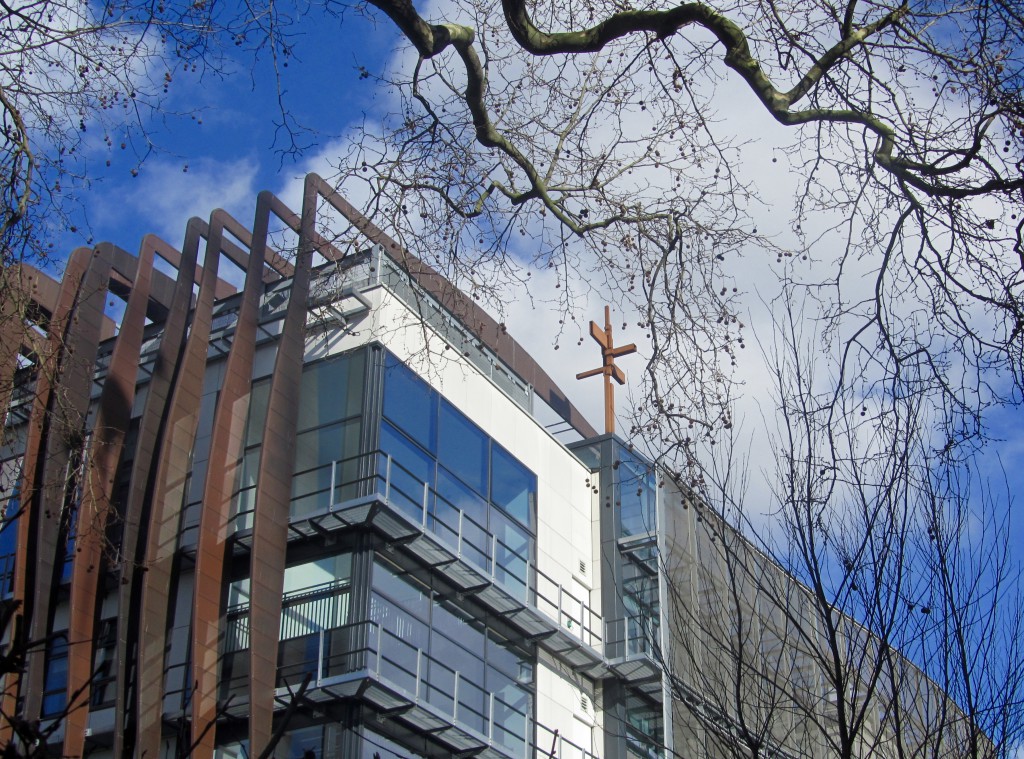 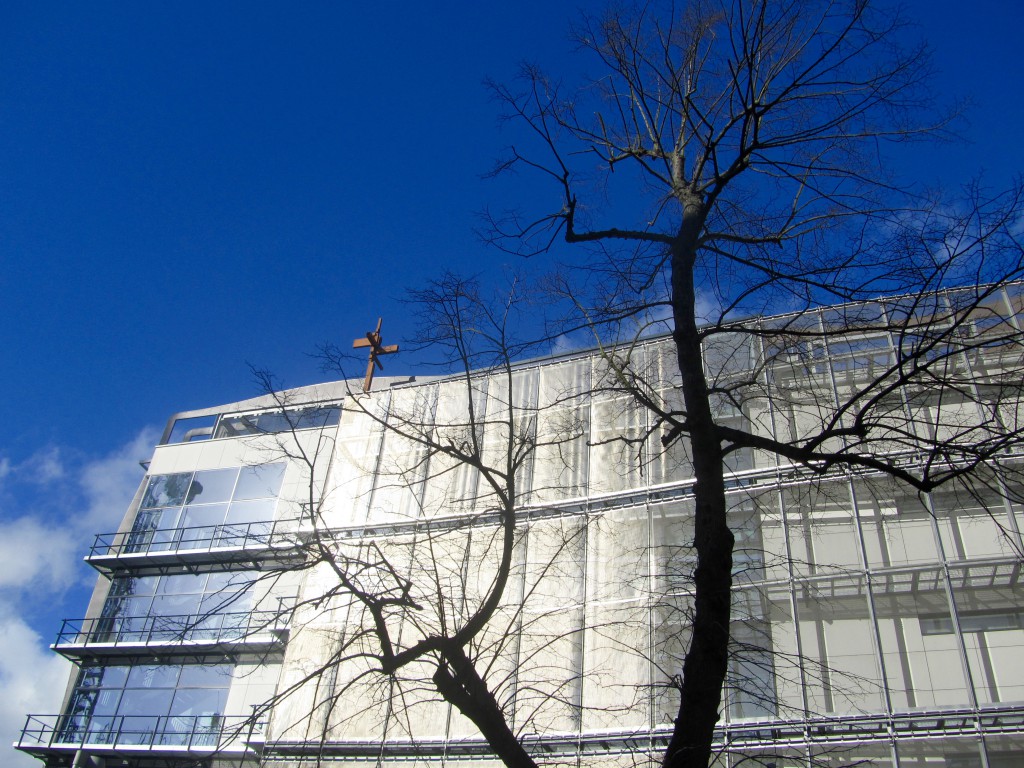 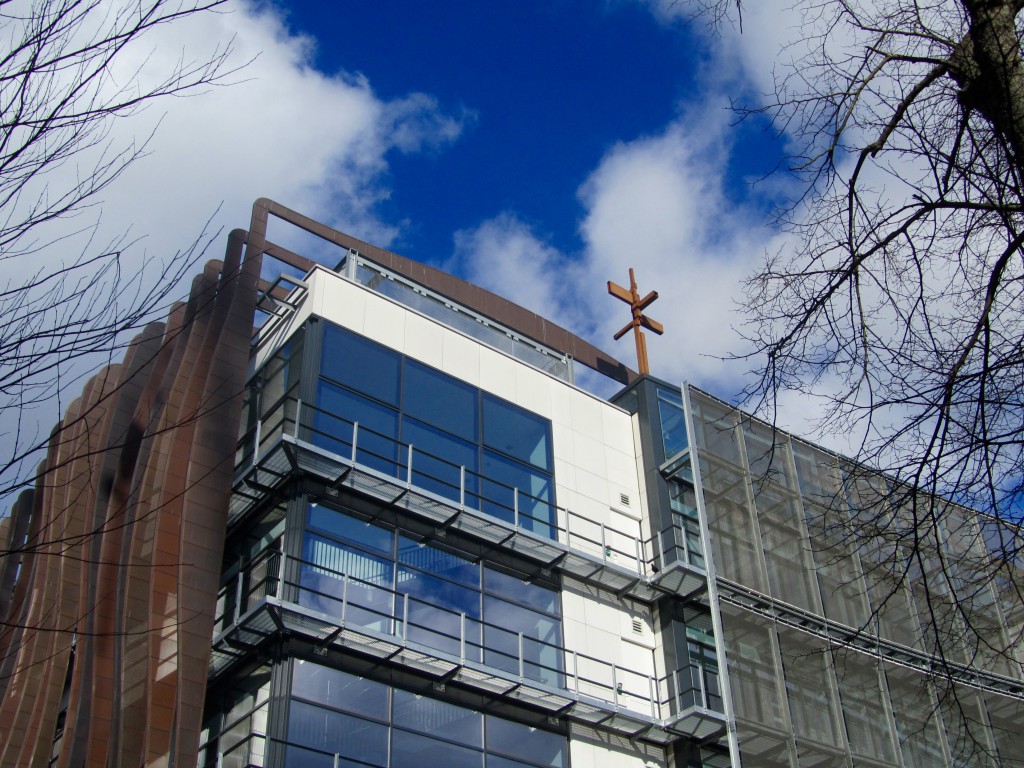 He’s on the roof but he belongs to the land, he’s well connected but he’s rooted to the spot, he’s a tree.