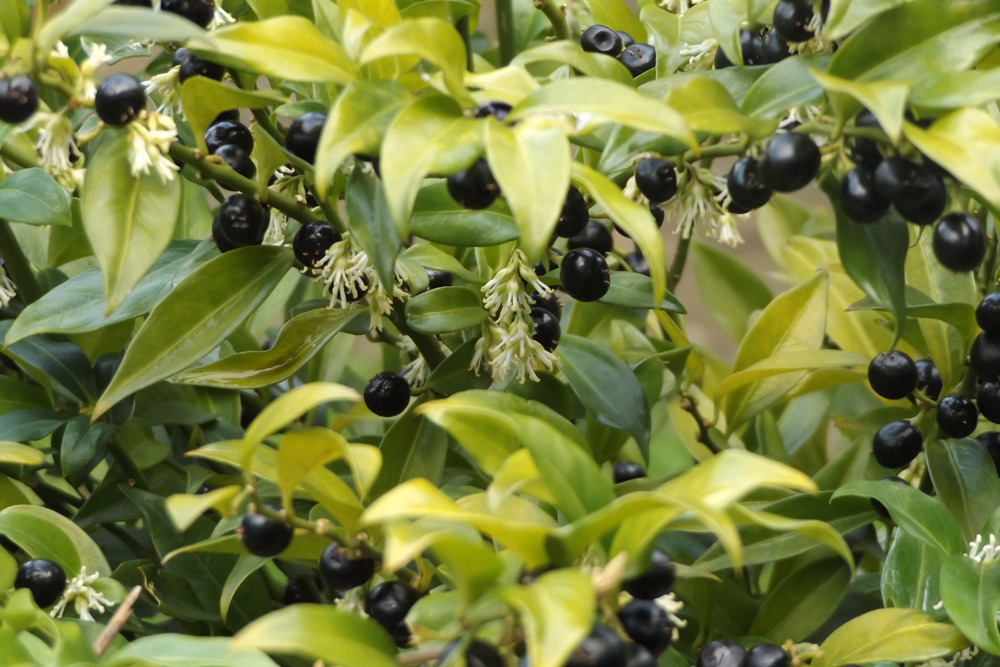 A fantastic shrub that just missed out on being in the January blog. It started flowering 1st February and filled the garden with the most delicious scent. The black berries are the product of last winter’s flowers. It’s a small evergreen plant that does best in shade or semi shade, remains small, and is another contender for Most Useful All-Round Plant. 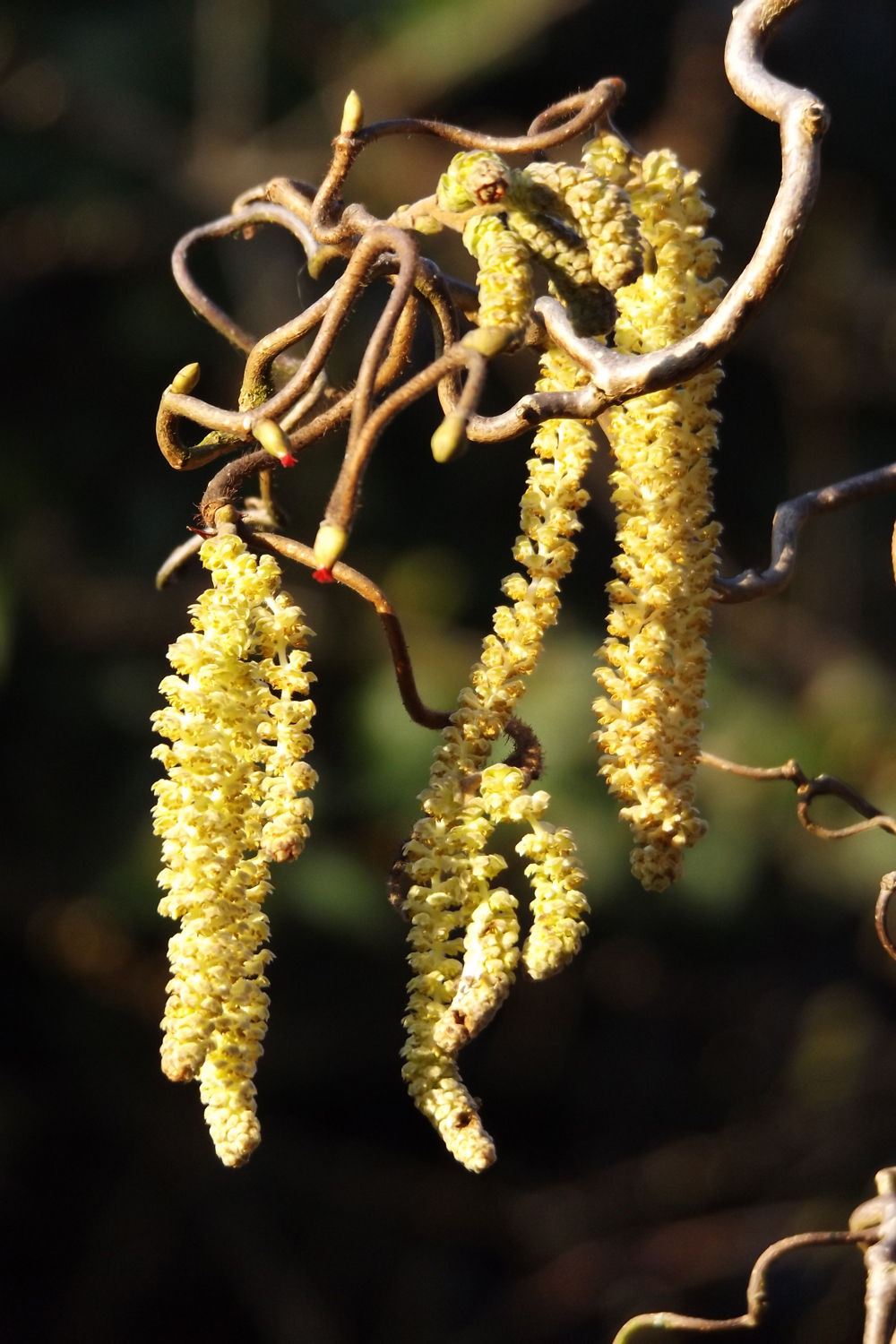 My two twisted hazel trees are in flower now. They’re commonly called ‘Harry Lauder’s Walking Stick’ after a Scottish music hall artiste from early 1900s, who often appeared on stage with a crooked walking stick. The catkins provide the pollen to fertilize the tiny red flowers (seen here), from which the hazelnuts develop. 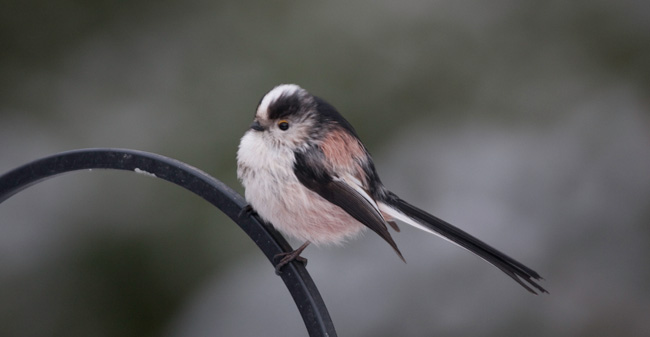 It’s always a pleasure to see Long-Tailed Tits in the garden. These diminutive little pink, black and white fluffy balls with (guess what?) long tails have earned them the name of Flying Spoons in our household. They usually arrive in a small group of the same species, or with other tits. You often hear them before you see them – they have a thin high pitched call – “see see see”. Today (29 Feb), I watched as a Long Tailed and a Blue Tit darted about from shrub to shrub, eating dried seed heads of buddleia and searching out early-season grubs and caterpillars. (The photo is not my own I hasten to add, the birds moved too fast for my camera). A male Blackcap soon joined in. Blackcaps are shy songbirds that have traditionally overwintered on the continent but in recent years a group of them have stayed in southern England. The variety and quantity of birds I see in the garden has gone up dramatically in the last few years, whether it’s the birds just getting wise to an easy lunch or an increase generally in their populations I’m not entirely sure. It’s just nice to watch them as I’m having my muesli in the morning and a great alternative to Breakfast TV. 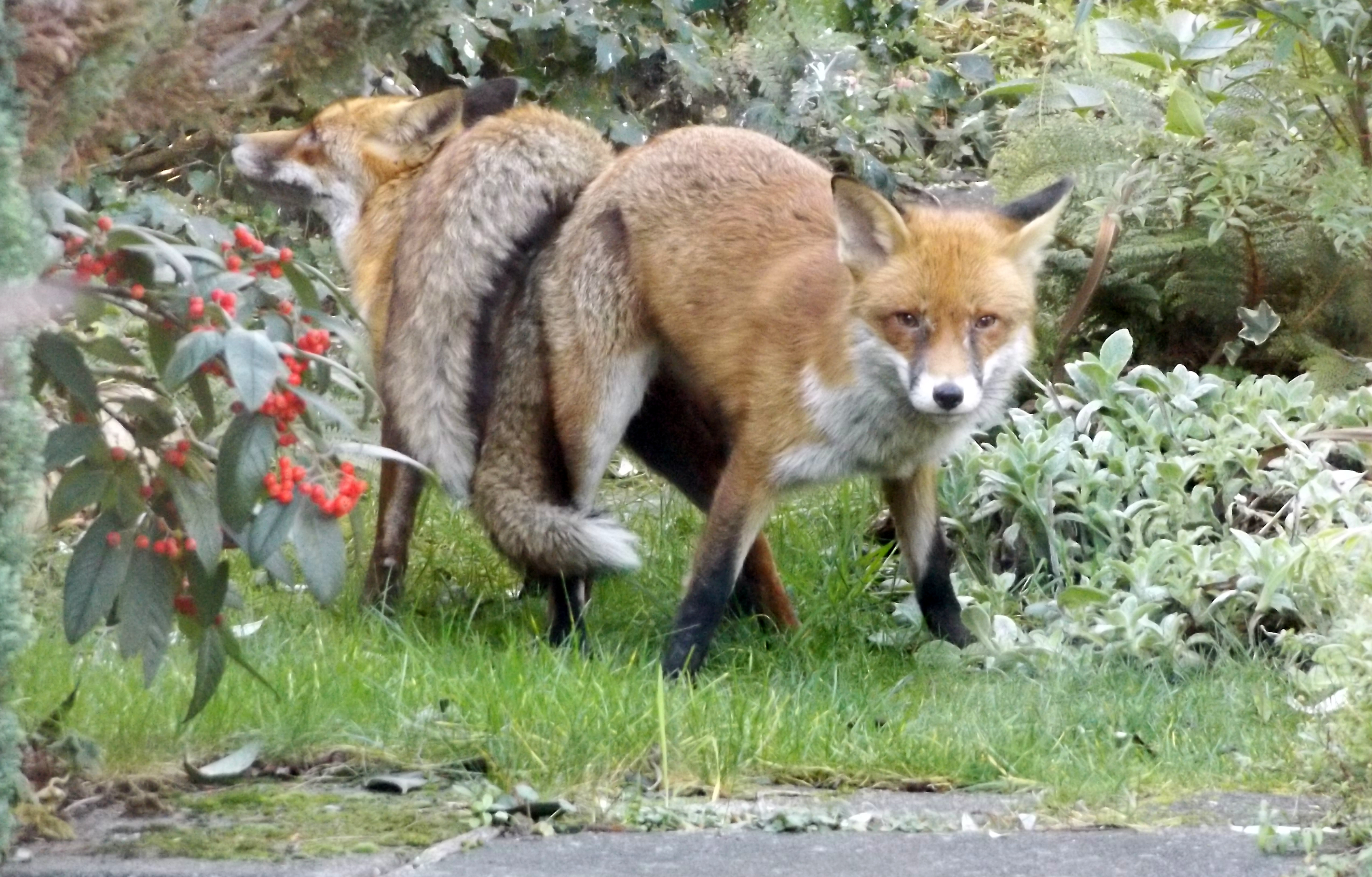 I looked out of the kitchen window at the end of January to be greeted by this spectacle. And in broad daylight! They went walking round and round the pond in this conjoined fashion for about 15 minutes before hobbling off behind the garage and out of my view. 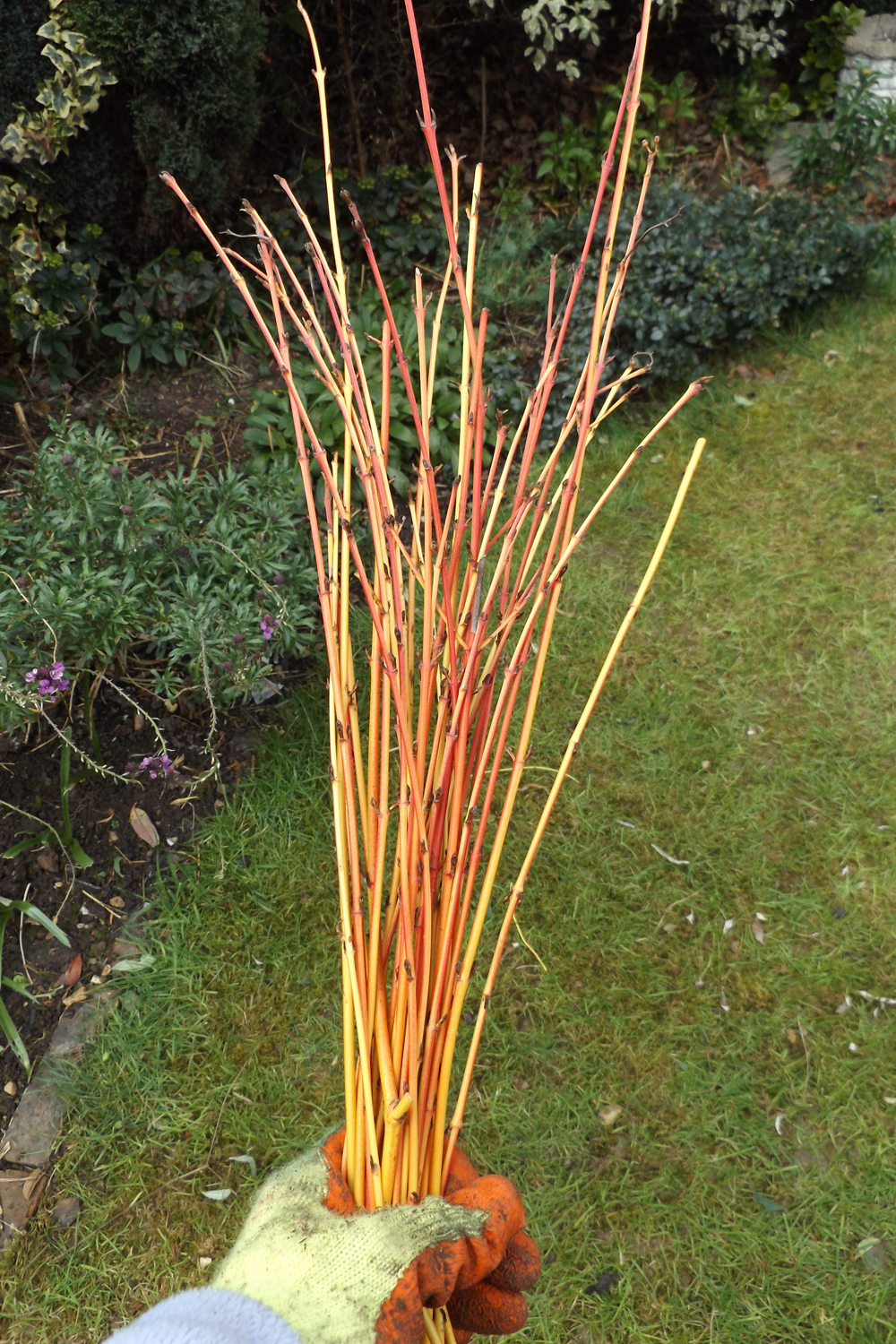 Cornus Midwinter Fire requires hard pruning each spring to promote all those lovely red stems that light up the garden in the darker months. Here’s a fistful I pruned earlier – I didn’t have the heart to throw them away so I’ve stuck them in a narrow pot (with compost) so I still have a bit of red in the garden. Who knows, in a few months I may have a few rooted twigs to make more plants? 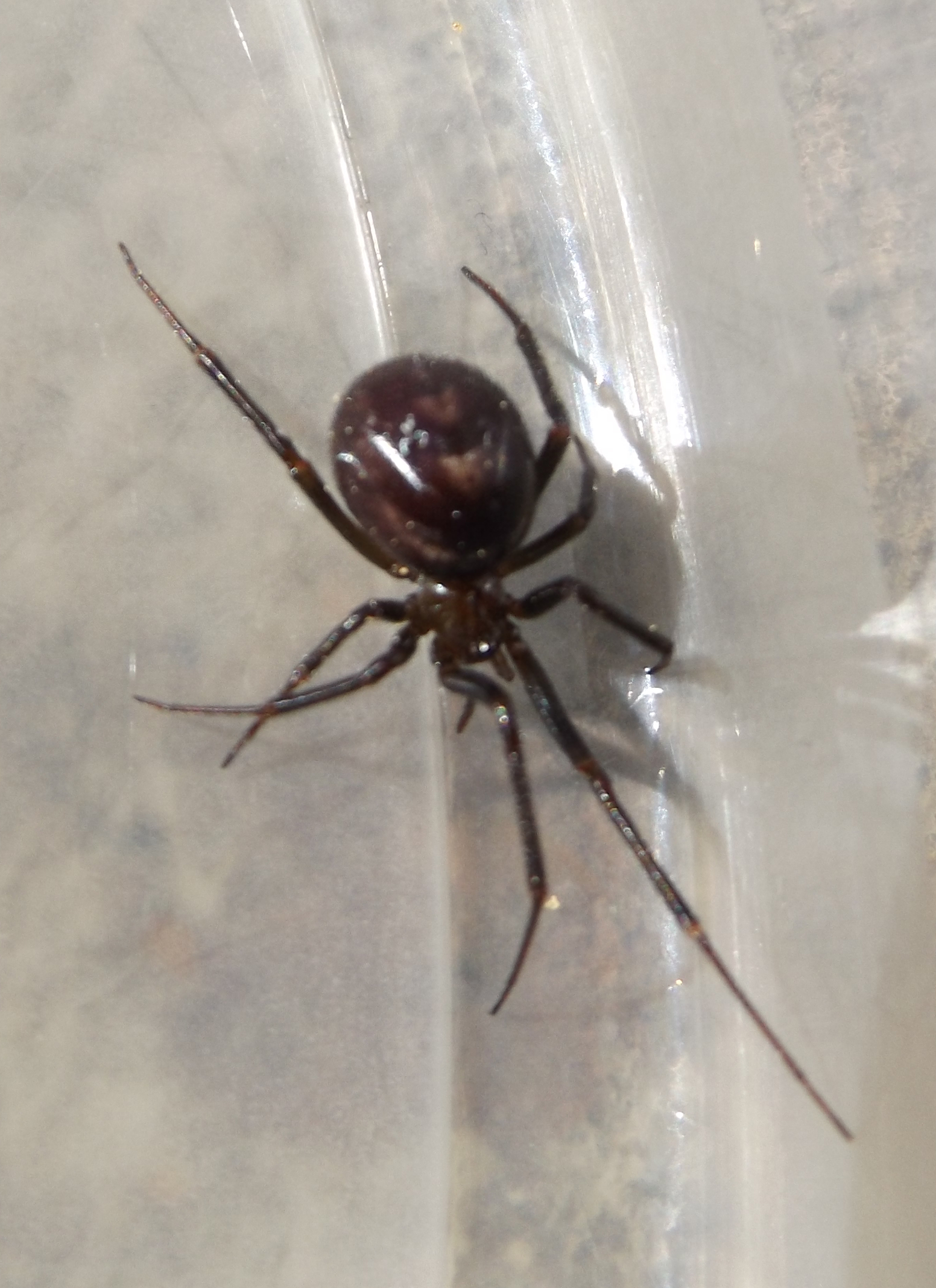 Warmer sunnier days bring my husband out of hibernation and turn his thoughts to doing man-things in the garage. This weekend (12/13 March) was earmarked for a grand clear-out – time to get rid of unnecessary stuff that really should have been thrown away ages ago, time to tidy up worktops and shelves, and time to hoover away all those cobwebs that dangle from the rafters.

We didn’t quite finish all we had to do on Saturday, so I got up early on Sunday with the intention of finishing it off before lunch. I’d pulled everything off a shelving system and was just about to start up the hoover when I noticed this rather splendid spider on the wall. I coaxed it into a plastic box so I could identify it (and so it wouldn’t get sucked up). It is Steatoda grossa, this one is a female, and likely (by its markings) to be several years old. Its abdomen is quite large – about the size of a large blackcurrant. This species is present in North America, and has been reported as preying on Black Widow spiders.

Anyhow, back to the hoovering.

With the spider safely in her box for later release I returned to the hoovering. I reached to retrieve a plastic bag wedged in the corner between the wall and the shelving unit….but what’s that? Those spikes look very familiar…….why, it’s Medge the Hedge!

After evicting him/her from my next-door neighbour’s wellington boot on Christmas Eve I hadn’t seen anything of him, and presumed he’d gone back to his nest under the Forsythia to hibernate. Little did we know he’d sneaked in our garage one day and made himself comfortable amidst a couple of bin-liners. Amazing that he slept through all the noise and upheaval of yesterday! I’ve put a bowl of water and some cat biscuits in the garage for him for when he wakes up, which should be quite soon now.

This linocut by Sarah Cemmick captures perfectly the scurrying nature of hedgehogs and is available as a greetings card from our Gallery.

6 thoughts on “A February / March Garden”