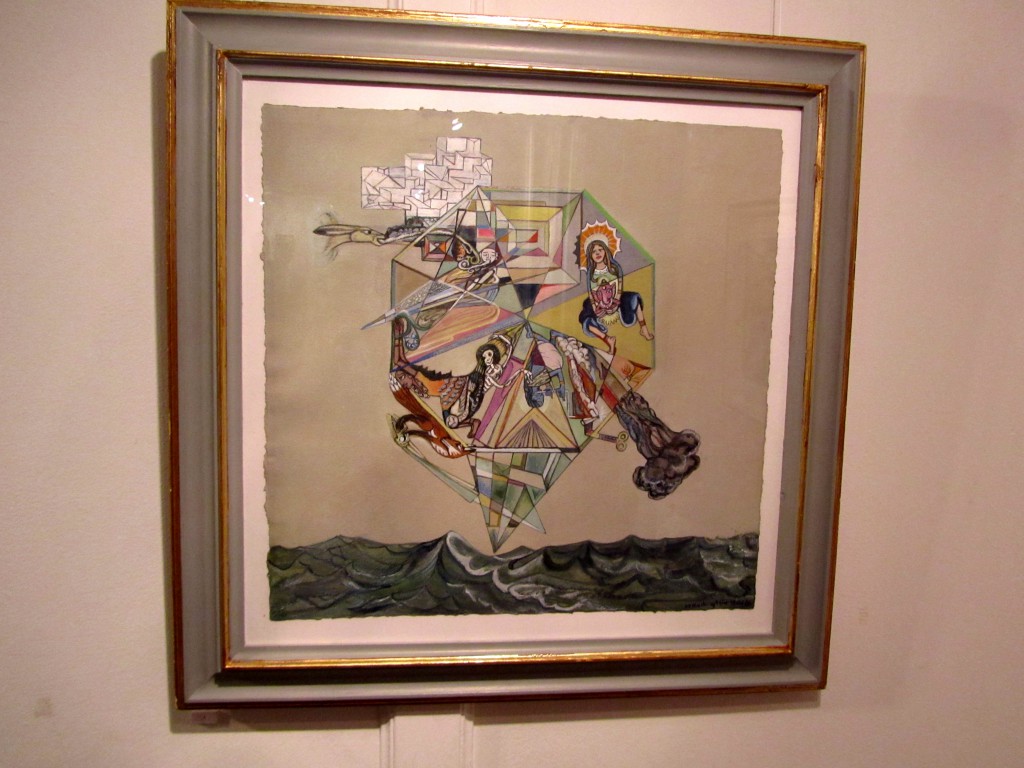 A quick look at David Hollington’s exhibition at Lauderdale House in Highgate. The opening night was busy with an enthusiastic crowd, groups talking excitedly about these new paintings, fantastic and magical inventions. I overheard David say this was his double album. There are two bodies of work, both created simultaneously. My photos are just an indication, much better to see the paintings face to face. They’re there until 28th September. 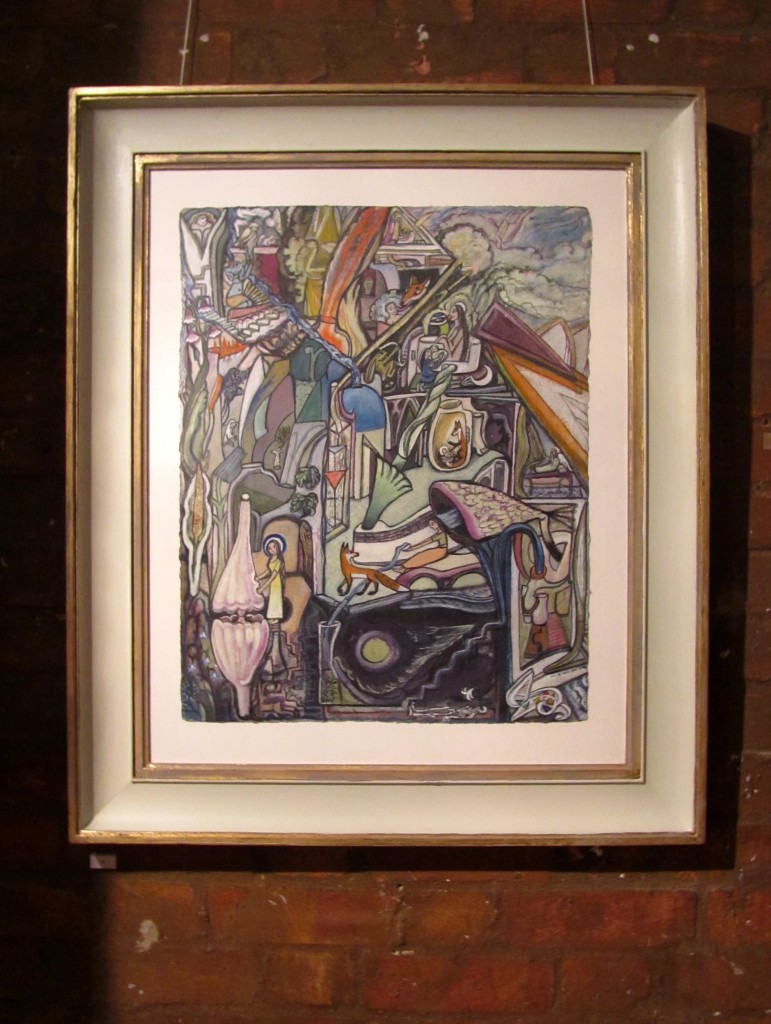 The spark that ignited Fierce Symmetry happened in the quiet, dreaming months of January and February, it was then that I decided to try and understand more about the Hadron Collider under CERN. The Higgs Bosun particle fascinated me and reading about it and its history drew me deeper into research. It was the theory of super symmetry that really caught my imagination as one of the possibilities of this principle, if it is ever detected is that it could throw a beam of light on to Dark Matter. Super symmetry could explain just what Dark Matter is and why our universe and even our bodies are full of it.

I began to think at this time about not being a painter but a sort of scientist. I started to dissect my paper with my pencil and a set square slashing in sharp geometric lines and angles. I don’t know exactly why, only that I was searching for a new element hitherto unexplained or unexplored in my work. Several pure super symmetry paintings made it into the show, principally Hospital (above) and Bosun’s Soma (top of page). The main body of the exhibition follows many of my popular themes including healing, loss and reconciliation. Animals as ever are major players thanks to their ancient wisdom. However I was acutely aware of symmetry in all the works not as we understand it in the simplistic sense but as a weight or balance which is fragile but tensile, holding all manner of natural forms together. In the painting Unstill Life (below) I tore the paper open and glued it back together leaving a hole, trying somehow to reveal the possibilities of other dimensions within or wrapped around our own. Perhaps one day artists and scientists will join together to find elusive super symmetry and we will enter into a new way of being. 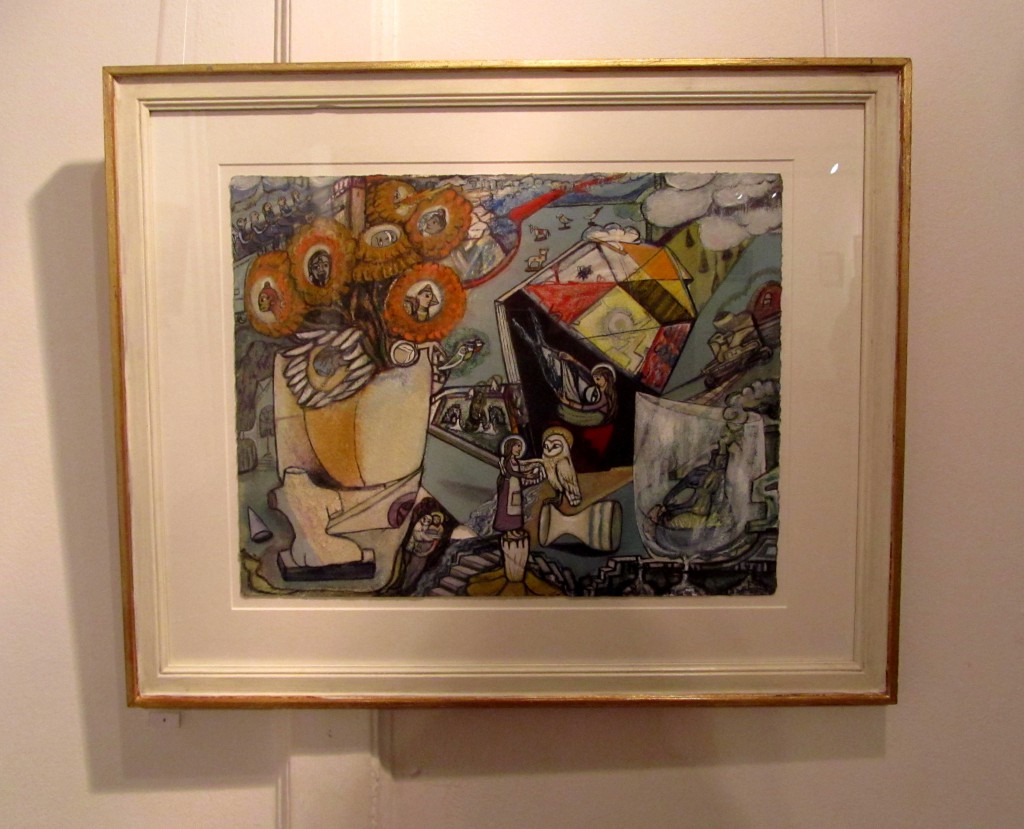 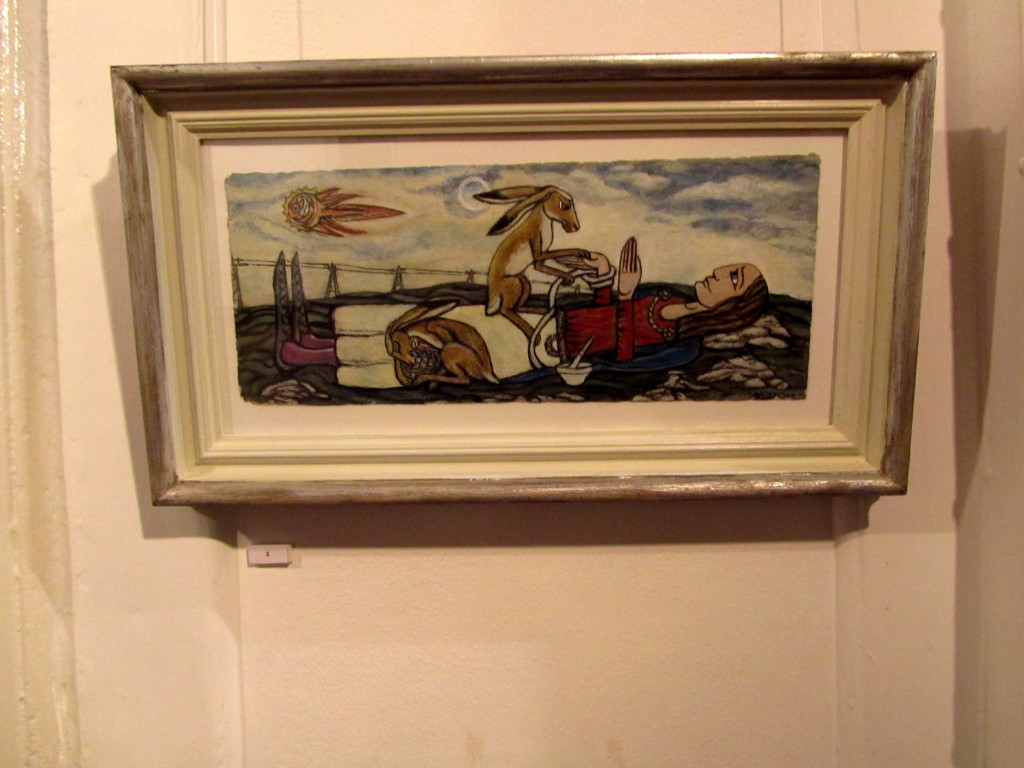 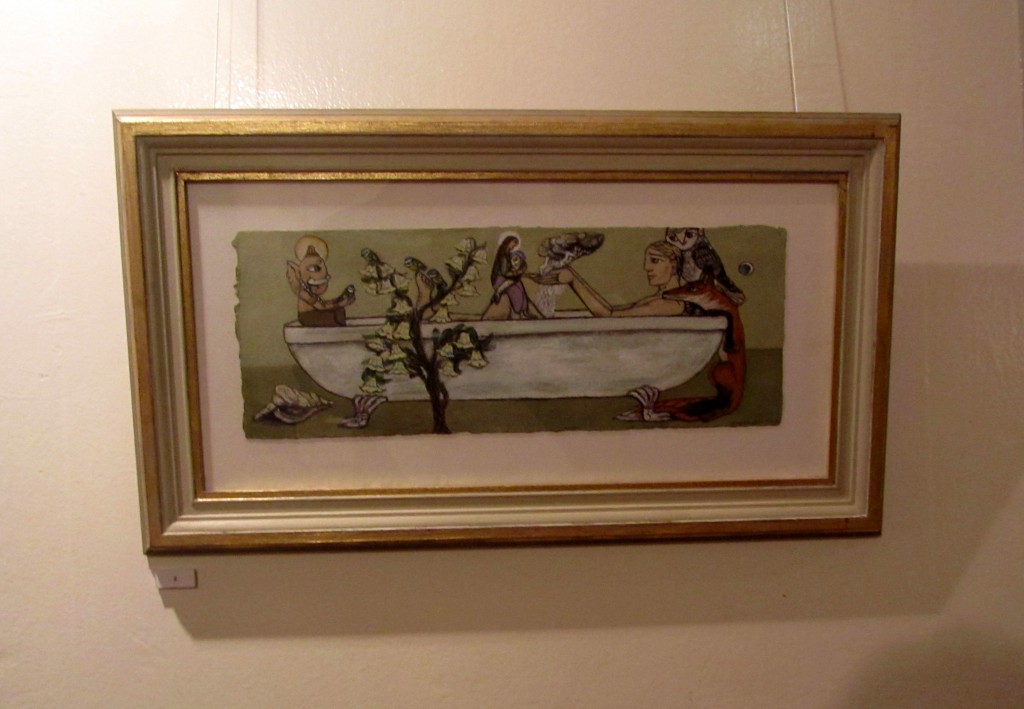 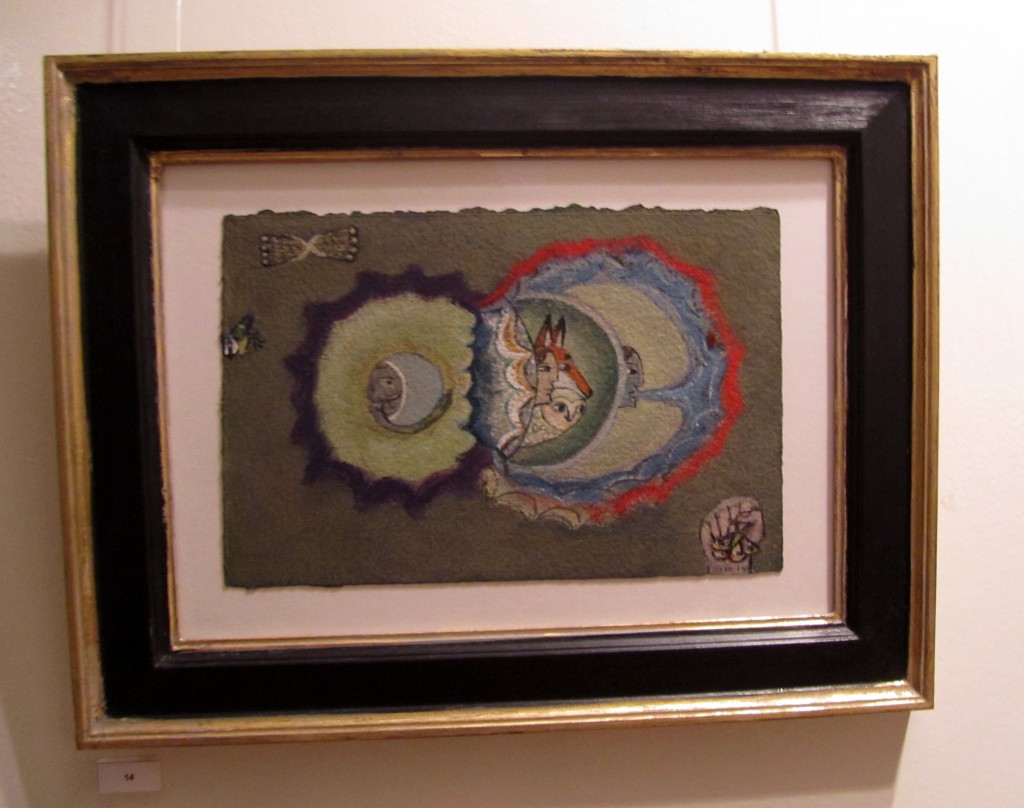 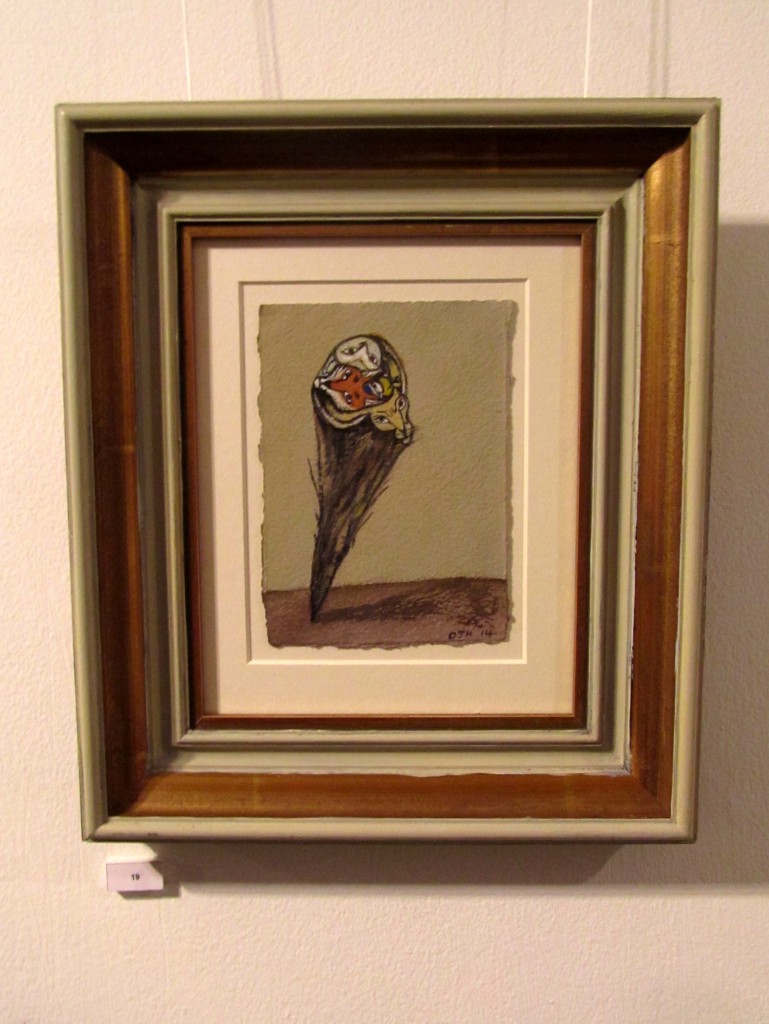 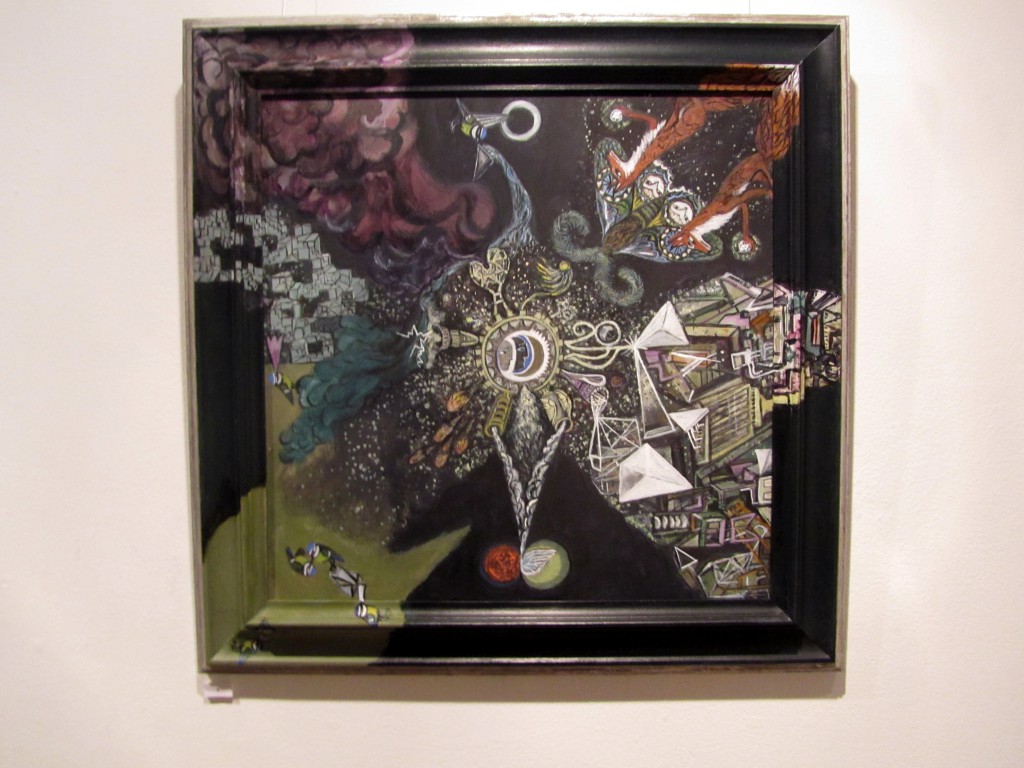 Nine paintings with corresponding lyrics. I have held onto the idea for this series of works for about ten years. In the autumn of 2013, as I was laying the ground work for 2014 I decided to split my show this year into two halves so I could finally achieve this series. The Dear Zeus paintings all come from the same source, the work of one of this country’s greatest poet/singer songwriters. I chose the songs carefully as they mean a great deal to me and are melded into my consciousness since I was introduced to this artist in my early teens.

I began by playing each song repeatedly whilst automatically drawing, as images began forming so did the new lyrics. Sometimes the image and lyric is simply a fragment, a mood or feeling invoked by the original. Other pieces are fully formed meditations or perhaps answers posed by questions provoked by the original. What I did not want to do was slavishly copy or retrace the singer’s vision. This is very much my own work, my world; characters and iconography abound along with a small amount of cross fertilisation with Fierce Symmetry which I was developing at the same time.

The result for me is a sort of love letter back to a performer who has informed and inspired my life, offering magic, kinship and protection from an often grey and harsh world. As I will never meet or hear them sing live, to return my admiration in person I am delighted to be able to share some of my meditations on this artist’s work. I don’t need to mention who this is as it will create too strong an image in the viewer’s mind. I have learnt a lot finally realising this work particularly about marrying my own text and images, difficult at times but a rewarding project, fittingly nothing less than appropriate for such an influential person in my life. 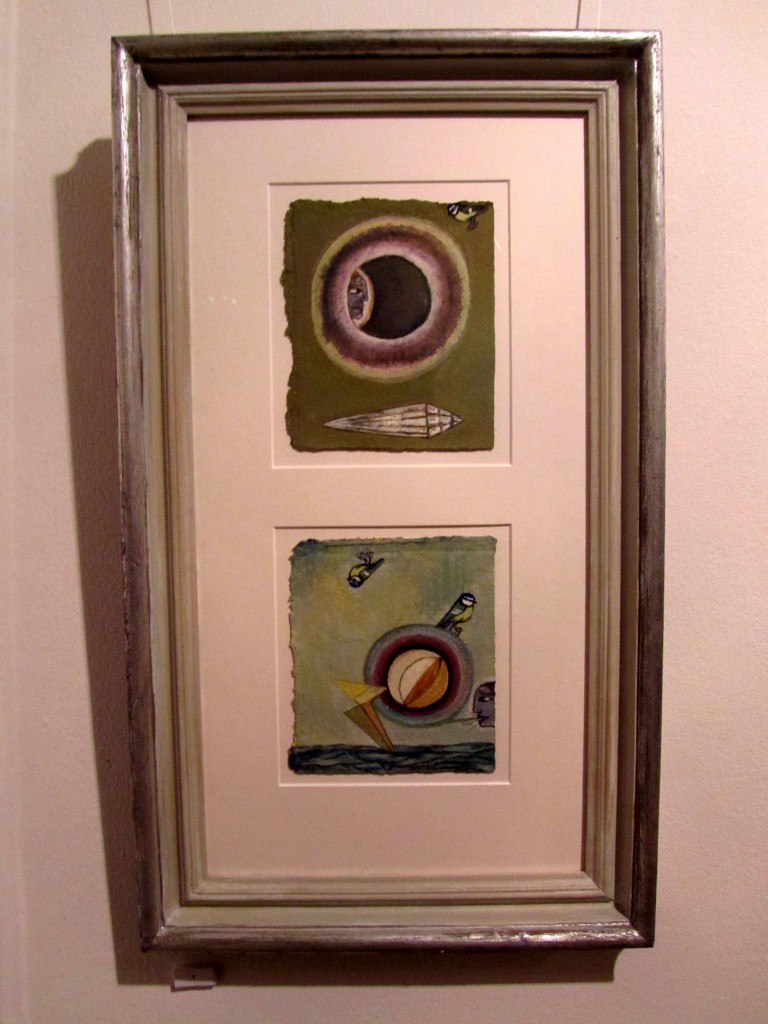 I am trembling in the space between the stones journey.
tilted at the flickering eclipse of the earth,
all manner of machinery whether lucid or mundane is buried deep
in our numb forms.

Somewhere there is a needle in the sky within it Vulpes, owl and I. 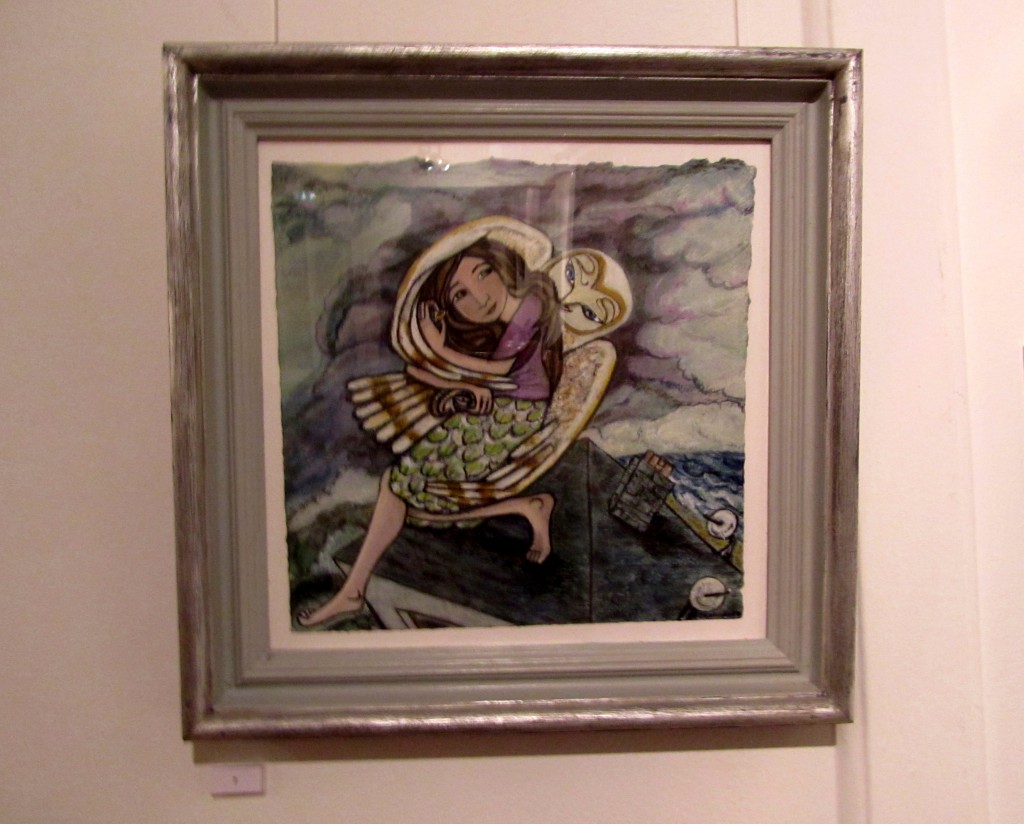 Ssssssssh,
I hardly noticed your book on Morse code,
We were already signing,
Revenge is sweetest when you don’t feel it,
Before I get chance to think it’s wrong,
The brackish waters come all a prattling in,
So dizzying,
Your wings are around me and it’s back up
the twilight yawning walls.
All ah ha ha ha ha,
We are a flying , smiling mess of cogs and springs.

Come on, come on over to an afterlife,
There is a bolt that’s made for snapping,
It shocks the reeling nimbus starlings into murmuring,
Beating the air below until it’s coming up like the undertrodden,
We are switched and now the footsteps are coming,
Dots of radium are running,
I am going hunting,
Leave the sly light on a dimmer,
Ssssssssssh,
I am gone.