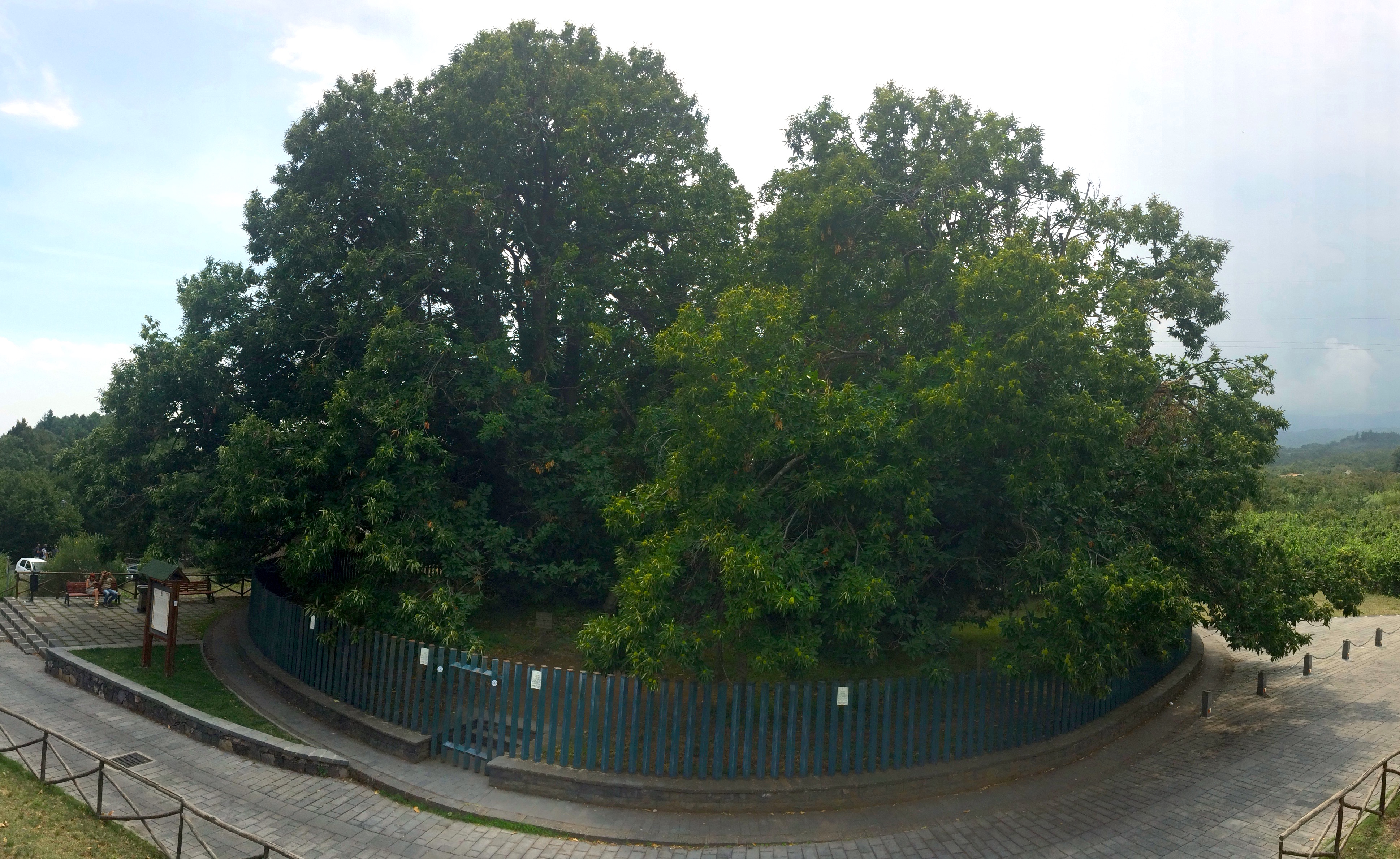 Some call it the Hundred Horse Chestnut, but that confuses me because it’s a sweet chestnut (Castanea sativa) not a horse chestnut (Aesculus hippocastanum). Maybe it should be the Sweet Chestnut of a Hundred Horses. In Italian it is called Il Castagno dei Cento Cavalli. It stands on the eastern slope of Mount Etna and has survived the volcano’s eruptions for 4,000 years. According to legend, Giovanna of Aragon, Queen of Naples, was visiting Mount Etna when a severe thunderstorm caused her and her entourage of one hundred knights on horseback to take shelter beneath the tree. 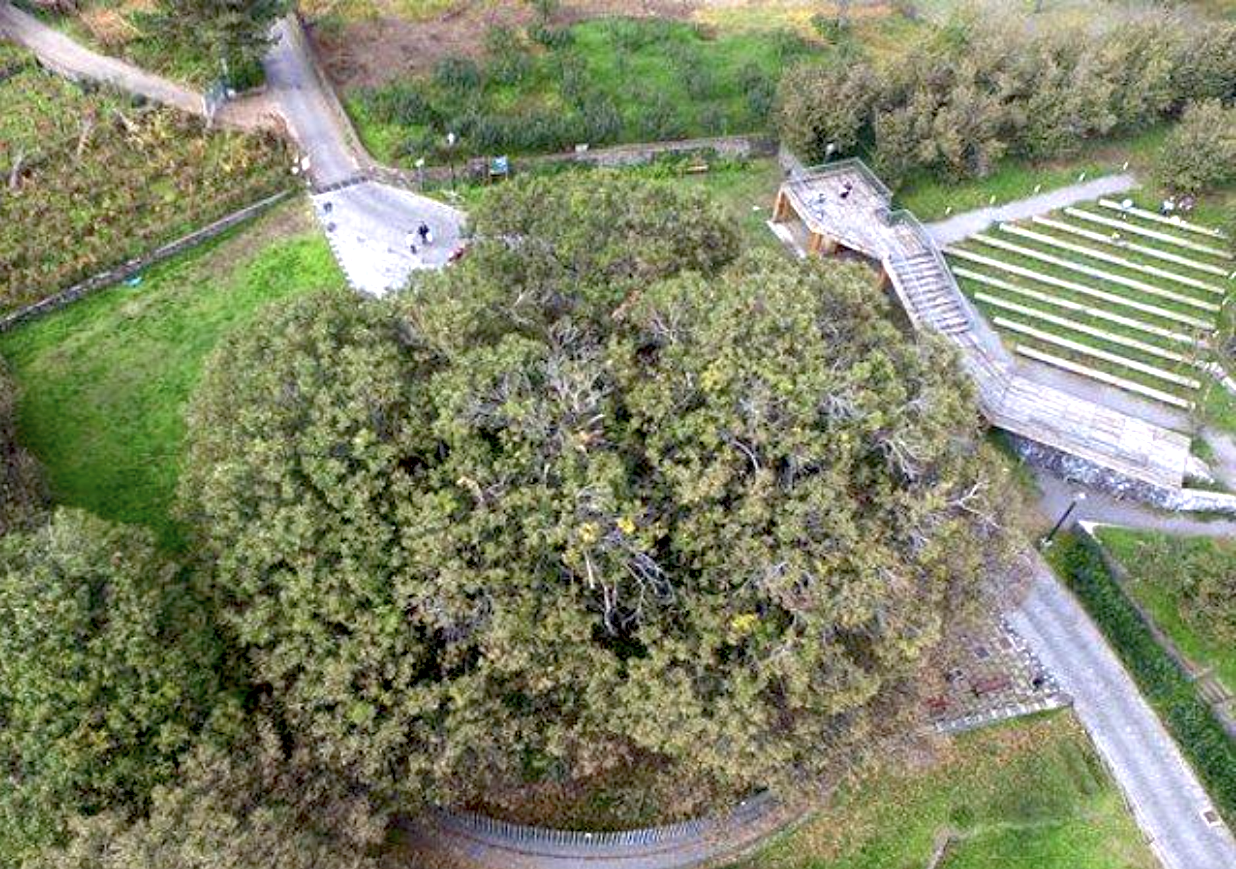 Seen from above, with wooden boardwalk at top right, a viewing platform from where my first photograph was taken, and all around the fertile volcanic soil supports vineyards and orchards. 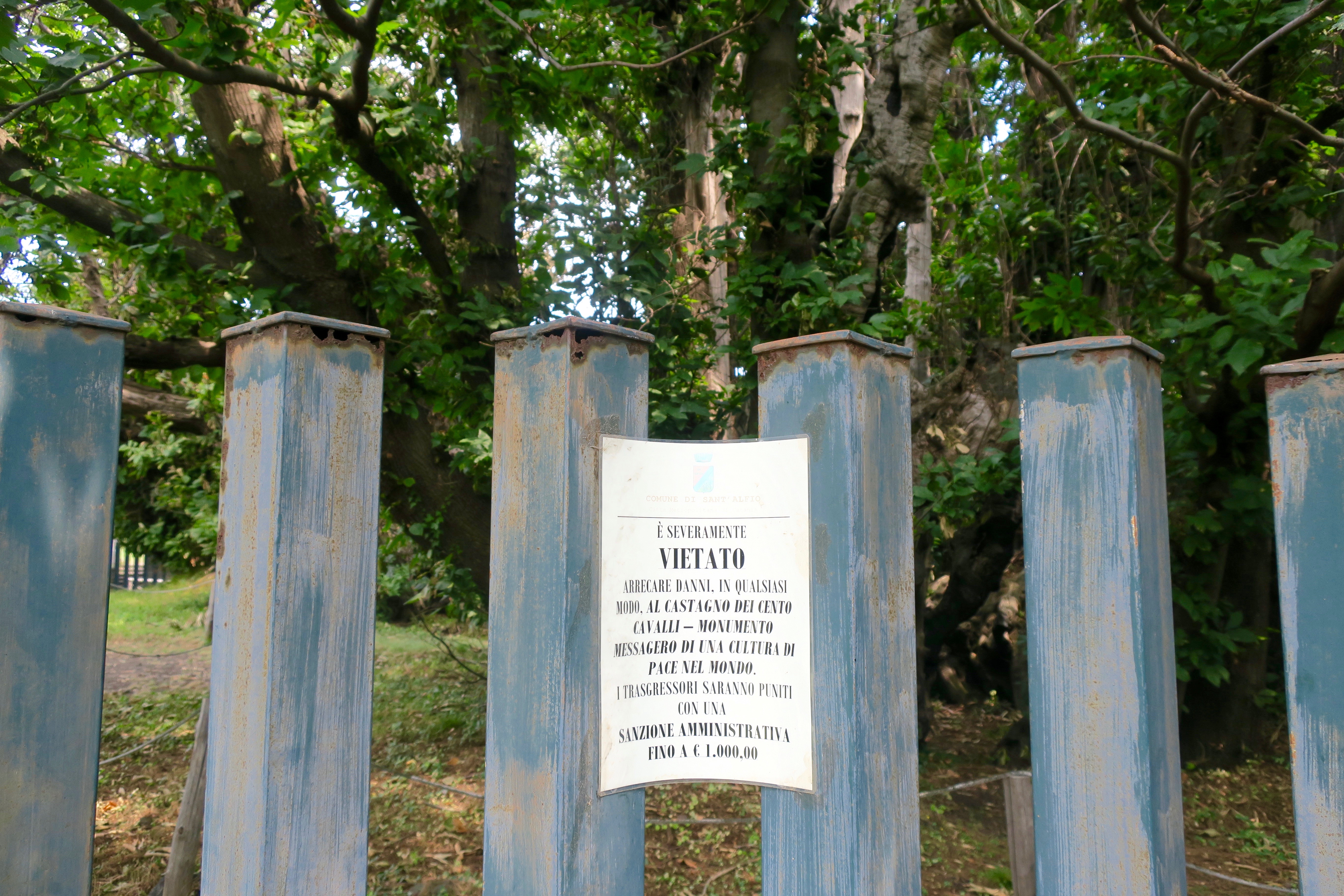 It is strictly forbidden to damage in any way the Chestnut of the Hundred Horses
– messenger monument of a culture of peace in the world.
Offenders will be punished with an administrative penalty up to €1,000.00.

Nowadays Queen Giovanna would find it difficult to shelter her horses here. The tree is surrounded by a fence to keep visitors from trampling its roots and climbing its branches, but once a day the gate is briefly opened to allow pilgrims inside, though sadly not while we were there. 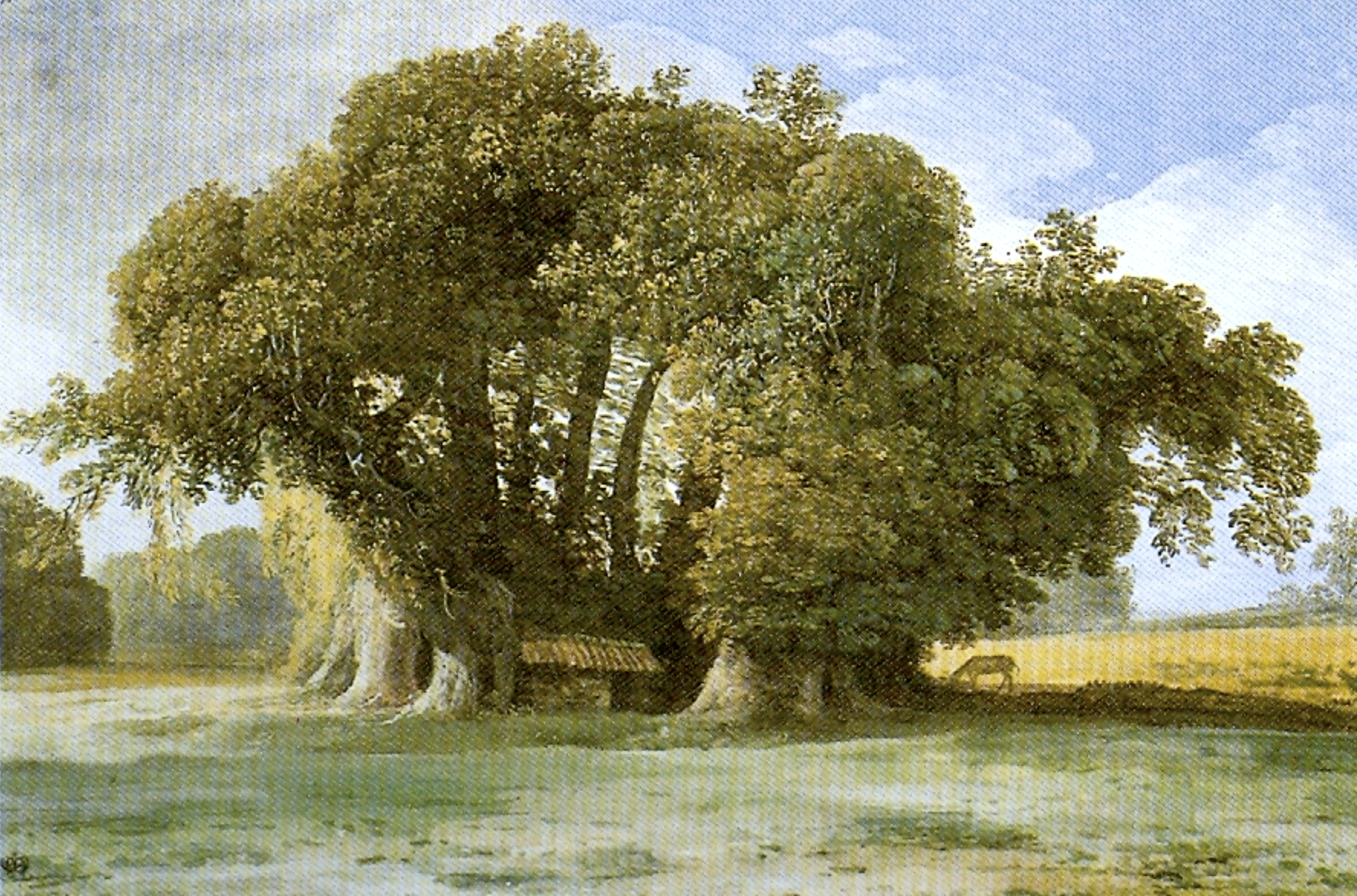 It was said to be the oldest and the largest chestnut tree in the world. When it was measured in 1780 it had a circumference of 58 m (190 ft). The tree subsequently split into multiple large trunks, but they still share the same roots. A small hut was built within to store the harvested chestnuts. 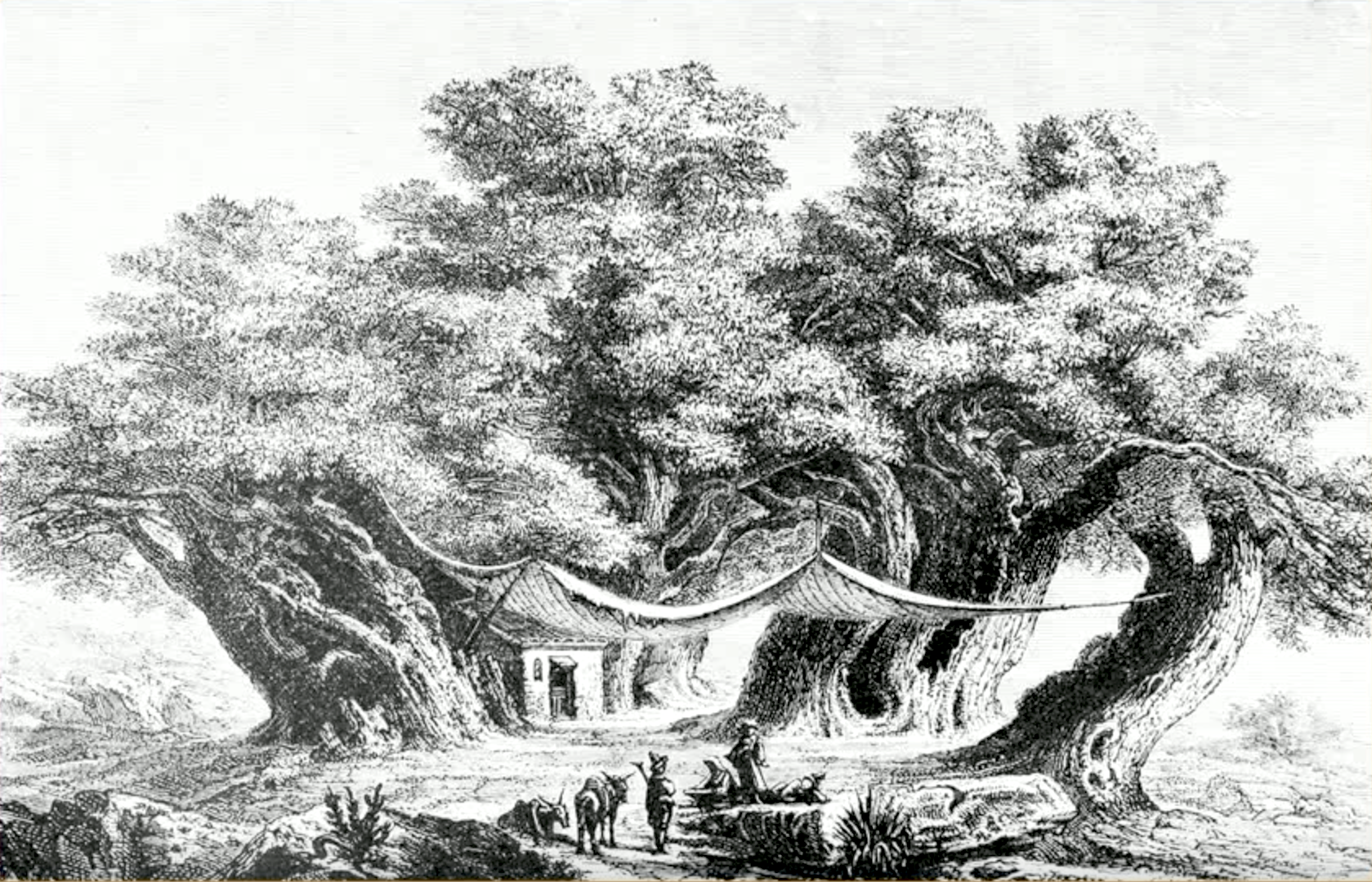 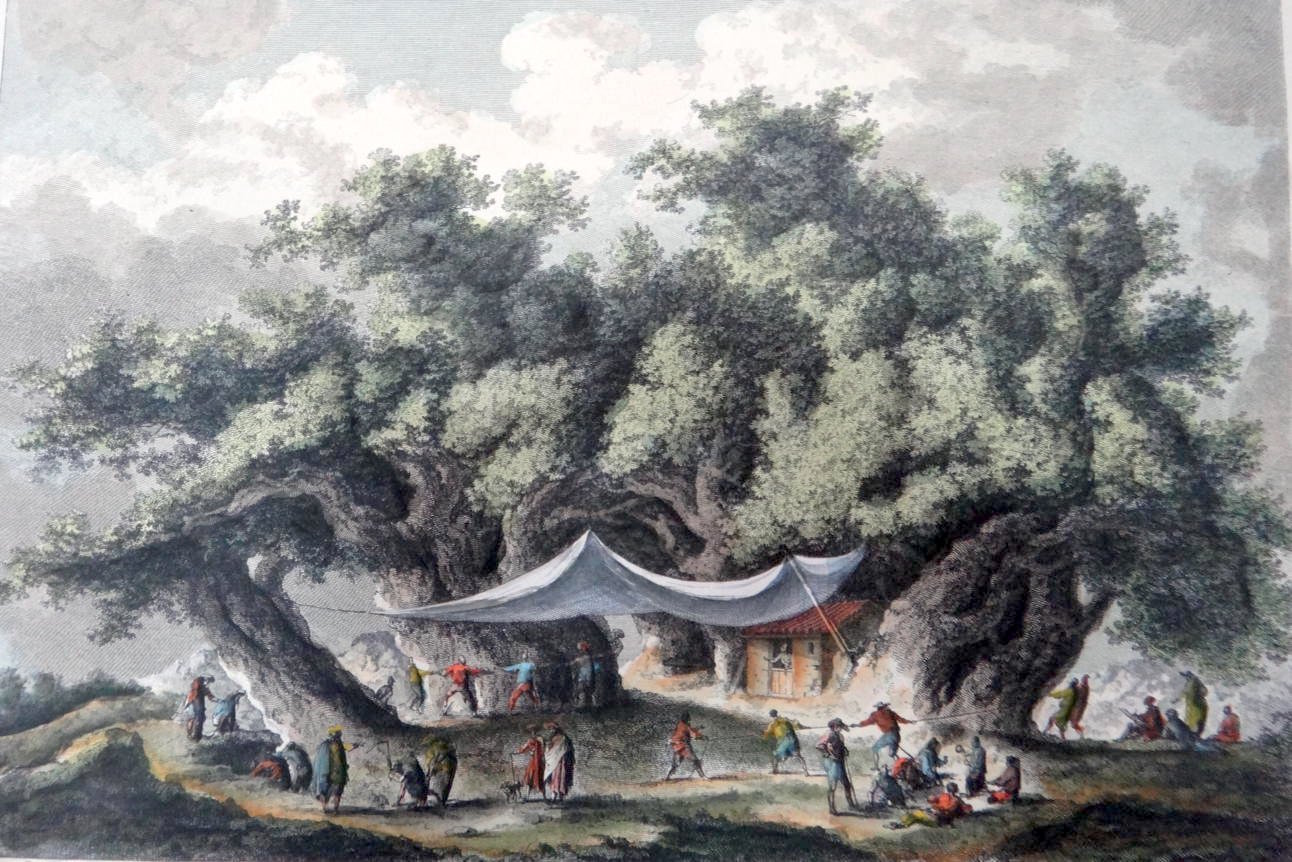 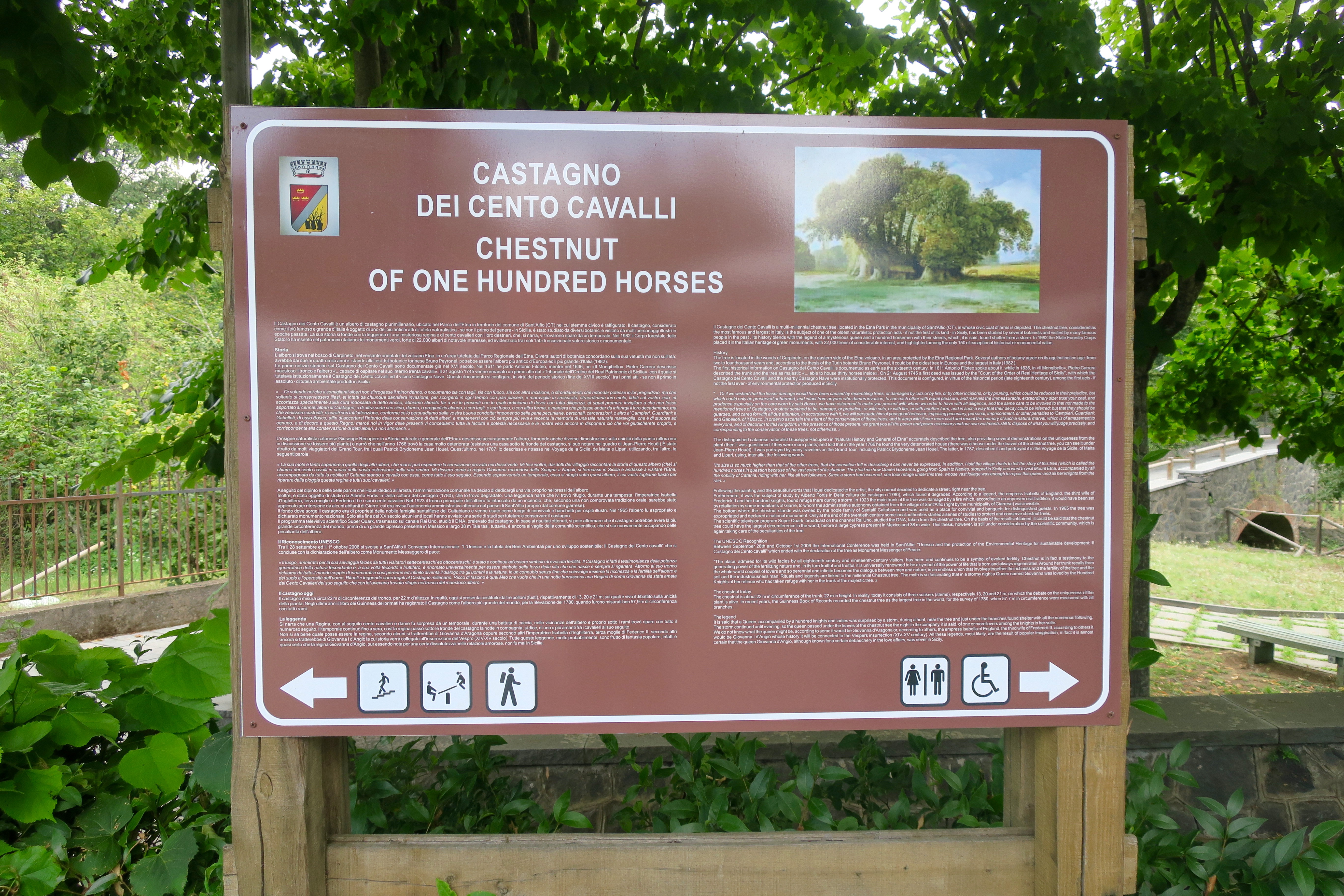 Il Castagno dei Cento Cavalli is a multi-millenial chestnut tree, located in the Etna Park in the municipality of Sant’Alfio… UNESCO recognition… the declaration of the tree as Monument Messenger of Peace:

“The place, admired for its wilderness by all eighteenth-century and nineteenth-century visitors, has been and continues to be a symbol of evoked fertility. Chestnut is in fact a testimony to the generating power of the fertilizing nature and, in its turn fruitful and fruitful, it is universally renowned to be a symbol of the power of life that is born and always regenerates. Around her trunk recalls from the whole world couple of lovers and so perennial and infinite becomes the dialogue between men and nature, in an endless union that involves together the richness and the fertility of the tree and the soil and the industriousness man. Rituals and legends are linked to the millennial Chestnut tree. The myth is so fascinating that in a stormy night a Queen named Giovanna was loved by the Hundred Knights of her retinue who had taken refuge with her in the trunk of the majestic tree.”

Try reading this passage aloud. It becomes a half-crazed, improvised ritual chant to the Chestnut god. Read on (zoom in to magnify the notice board) and we find that today the tree is now just three stems and their circumference is reduced to 22 m. Read on a little further and we learn that Queen Giovanna never actually visited Sicily. It was a big tree with a big imagination. 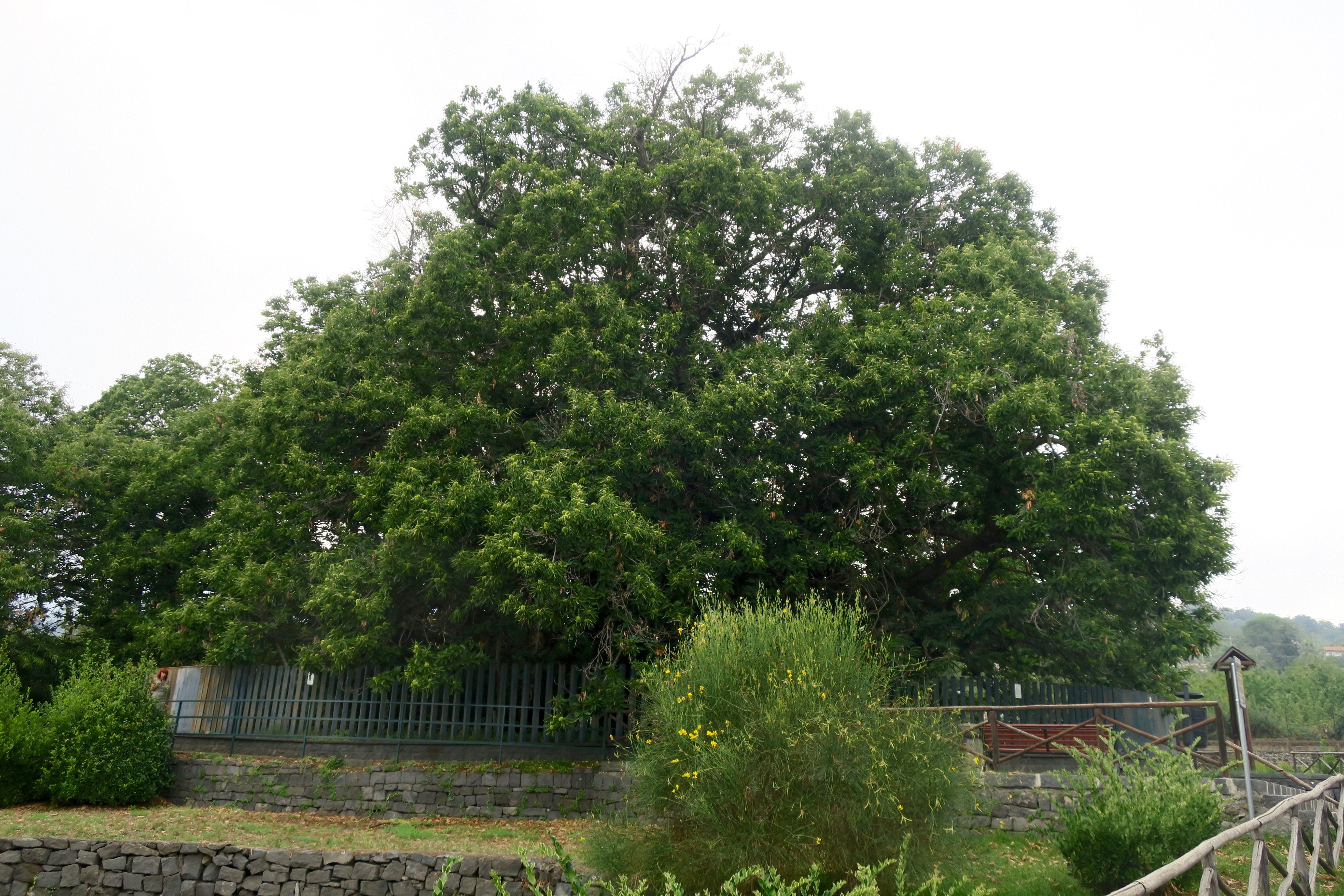 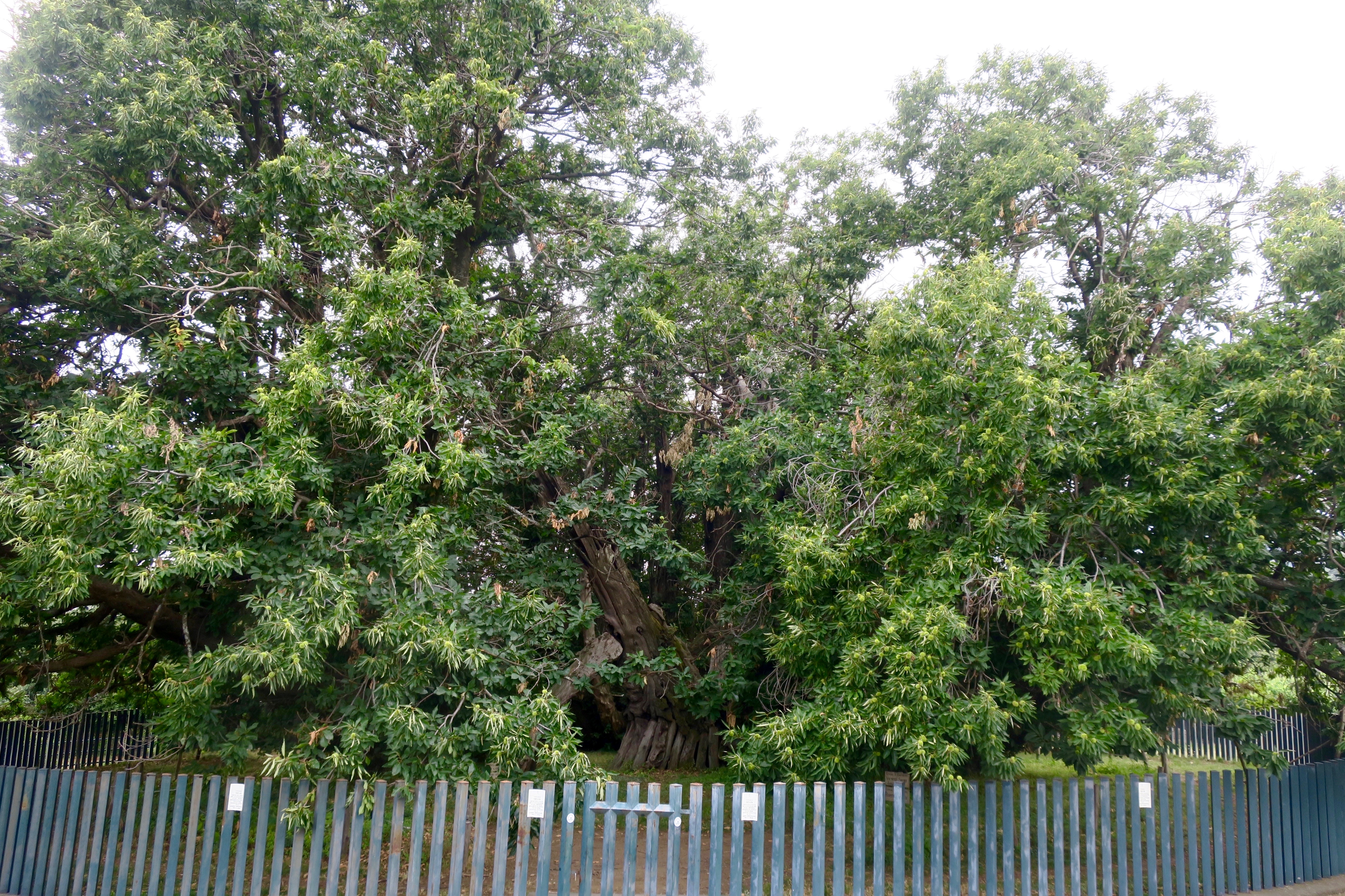 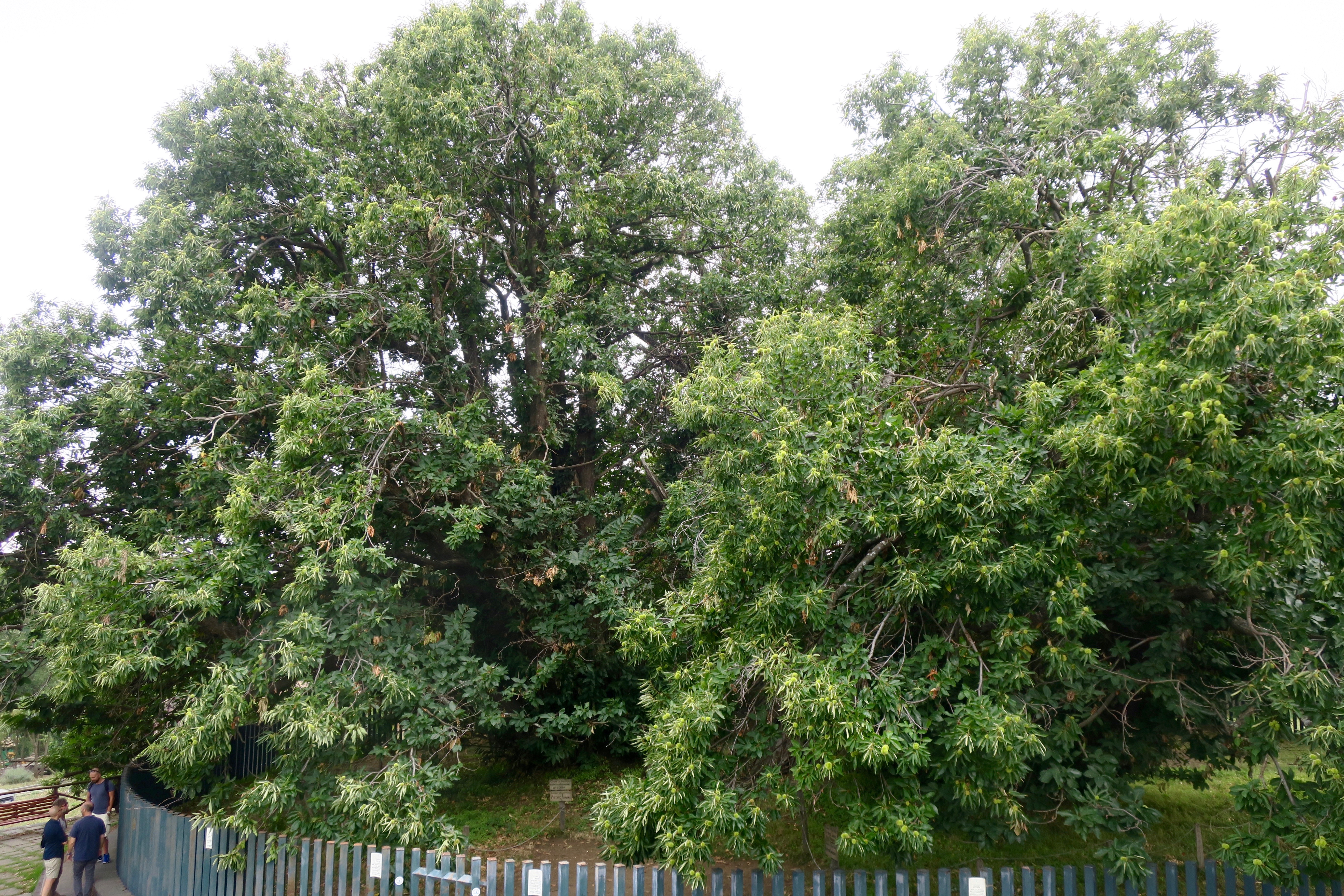 But however reduced, its remains are still pretty magnificent. 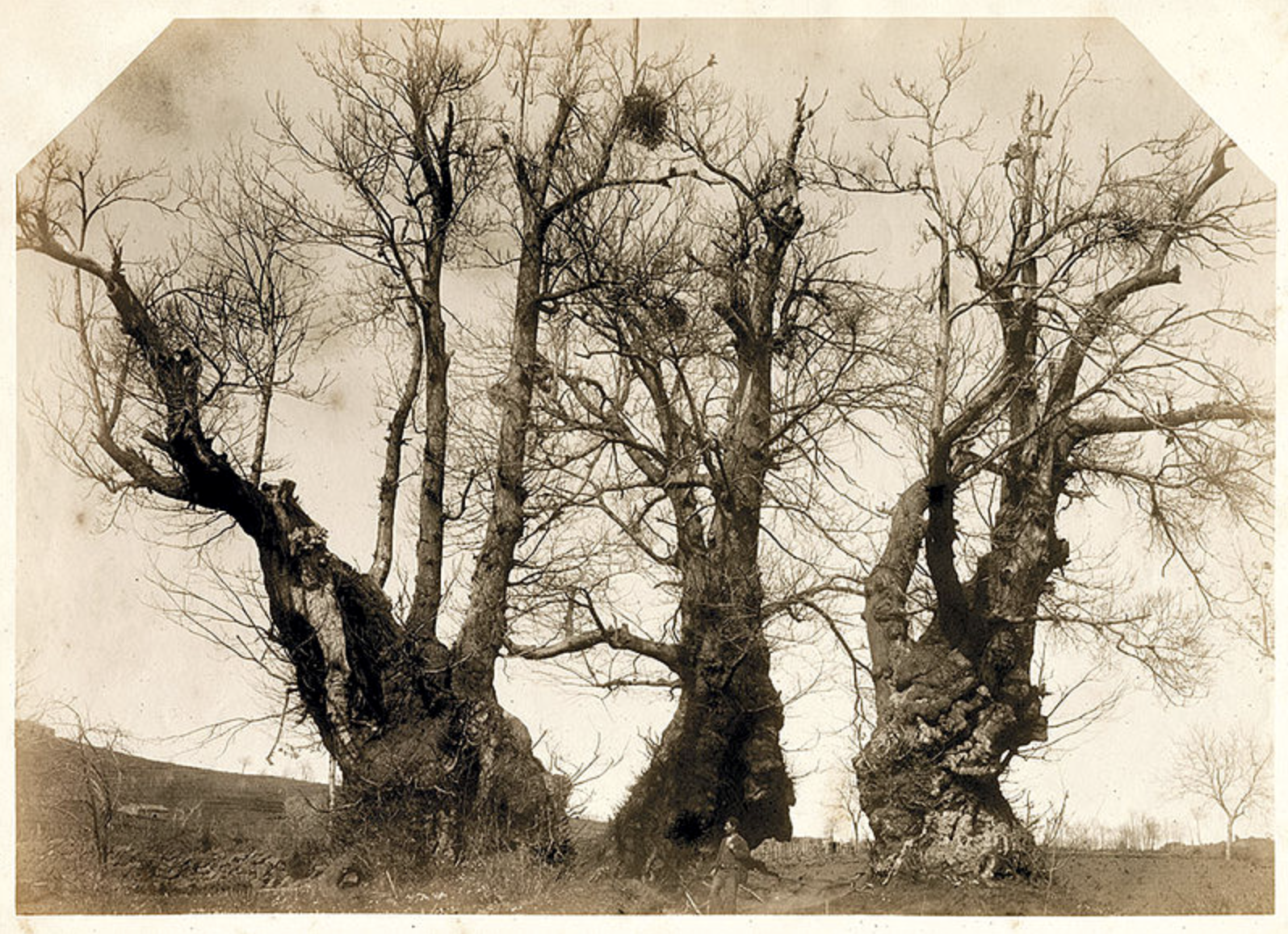 By the 1890s it had become the three stems we see today, a trio of trunks, a chestnut tree-o. 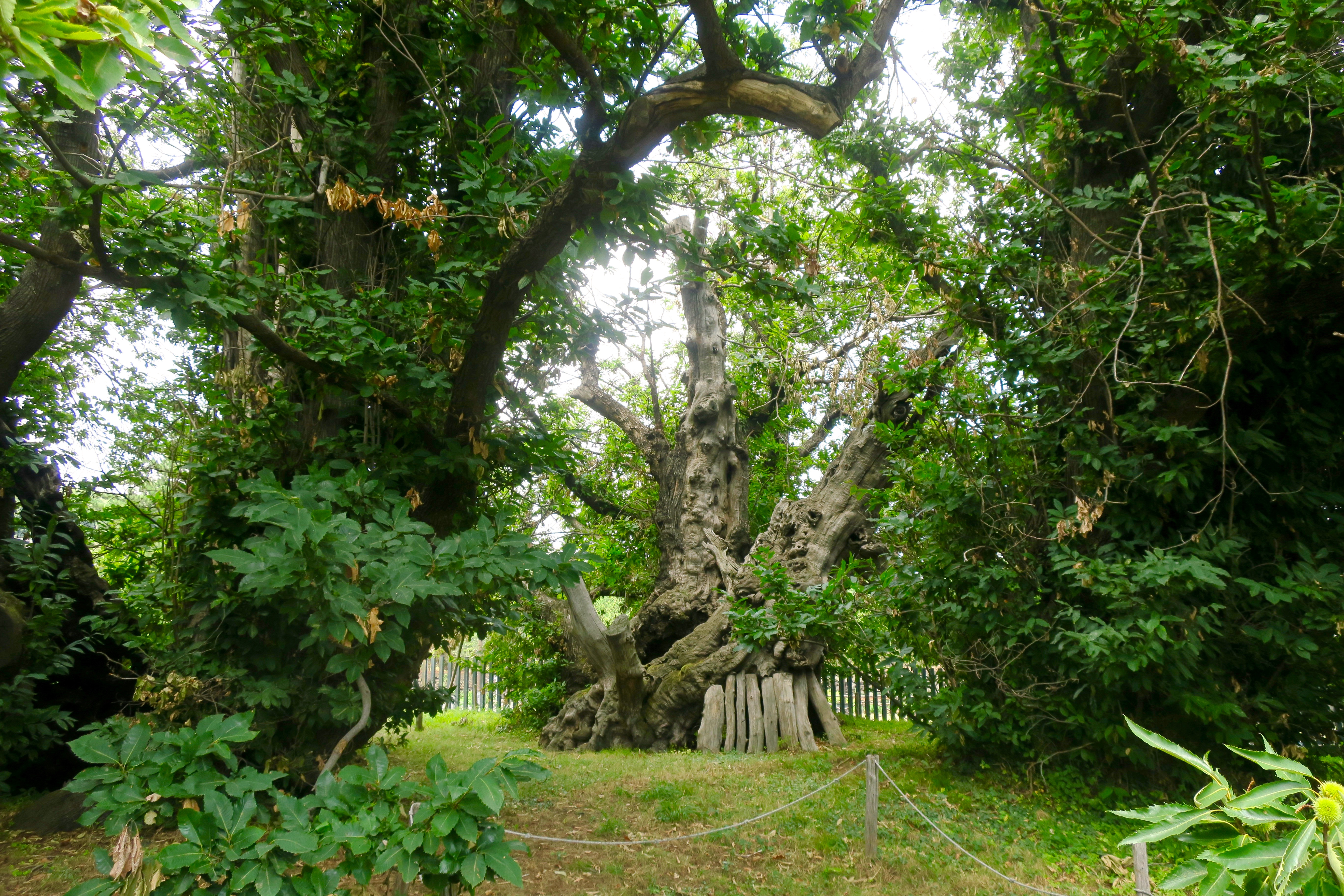 I’m still trying to make sense of it. It seems that what now appears to be a grove of trees, presently three, previously four, and before that half a dozen or more growing in a ring, was once a single huge tree with a hollow centre. A hollow tree on a hollow mountain, nurtured by the rich volcanic earth. 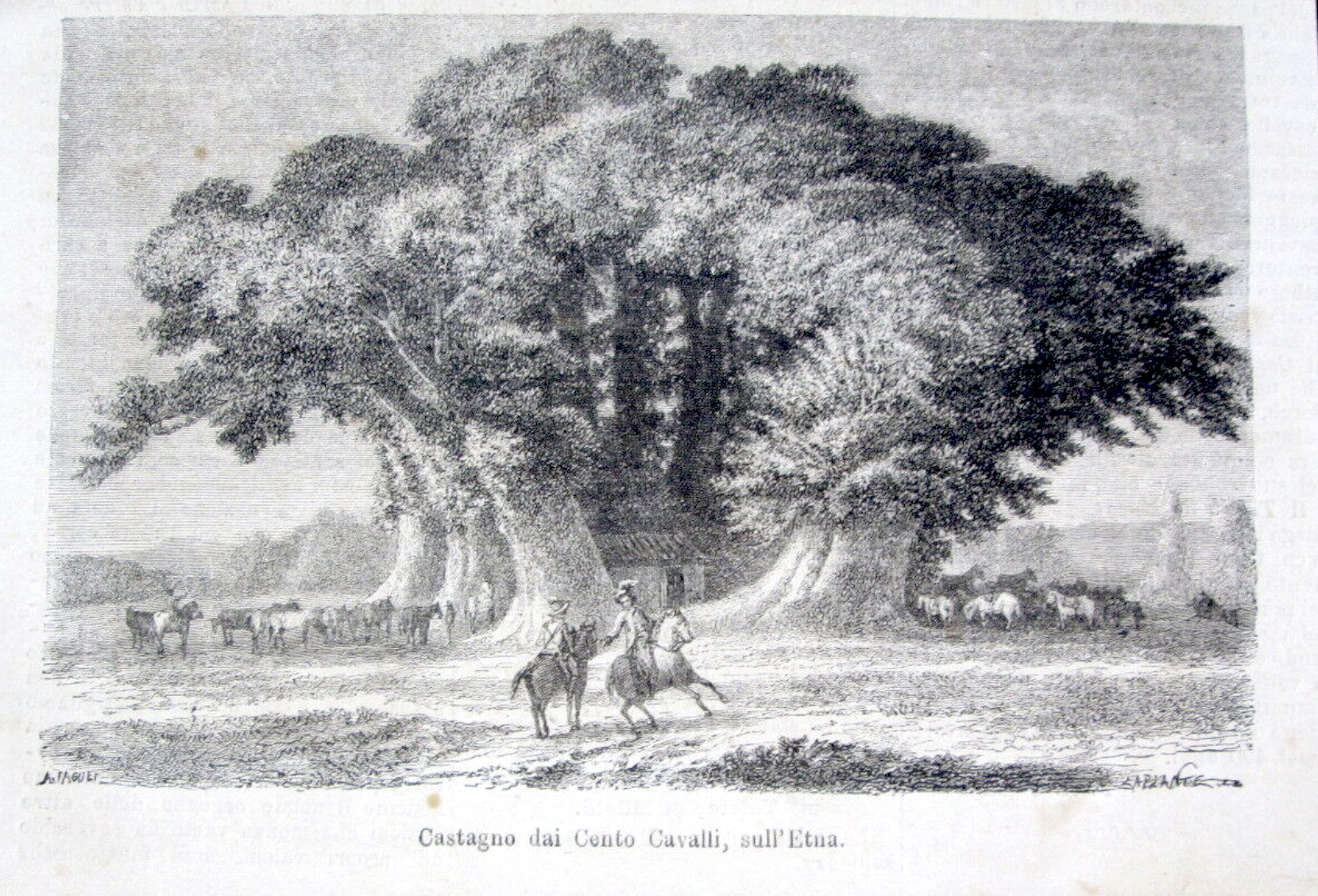 Once upon a time a great chestnut tree grew on Mount Etna. It was in a forest of great trees but this tree in particular was especially favoured. Fortune smiled on the tree and it received its spark of life from the breath of the volcano, and it became a forever tree. It grew tall and so wide that its girth might stop the mouth of the volcano, and its branches described the shape of Etna’s eruptions. It was so abundant that the whole island was fed with its fruits.

As time passed it came to resemble the shape of the volcano, with a mouth at its centre. The mouth grew wider and wider and the cheeks of the tree spread out further and further, so that it grew in a ring around a green atrium. The space within became a courtyard; it was used as a school and a dancehall, and as it grew bigger it was a marketplace, a fairground, a circus tent. Eventually a road passed though the middle and it became a station along the way to the top of the mountain.

Then slowly the ring of trees, trees that all shared the same root and were in fact one single tree, began to diminish and lose their number. Over the years if there were twenty trees they gradually became fifteen and then ten until eventually just the three that grow here today. 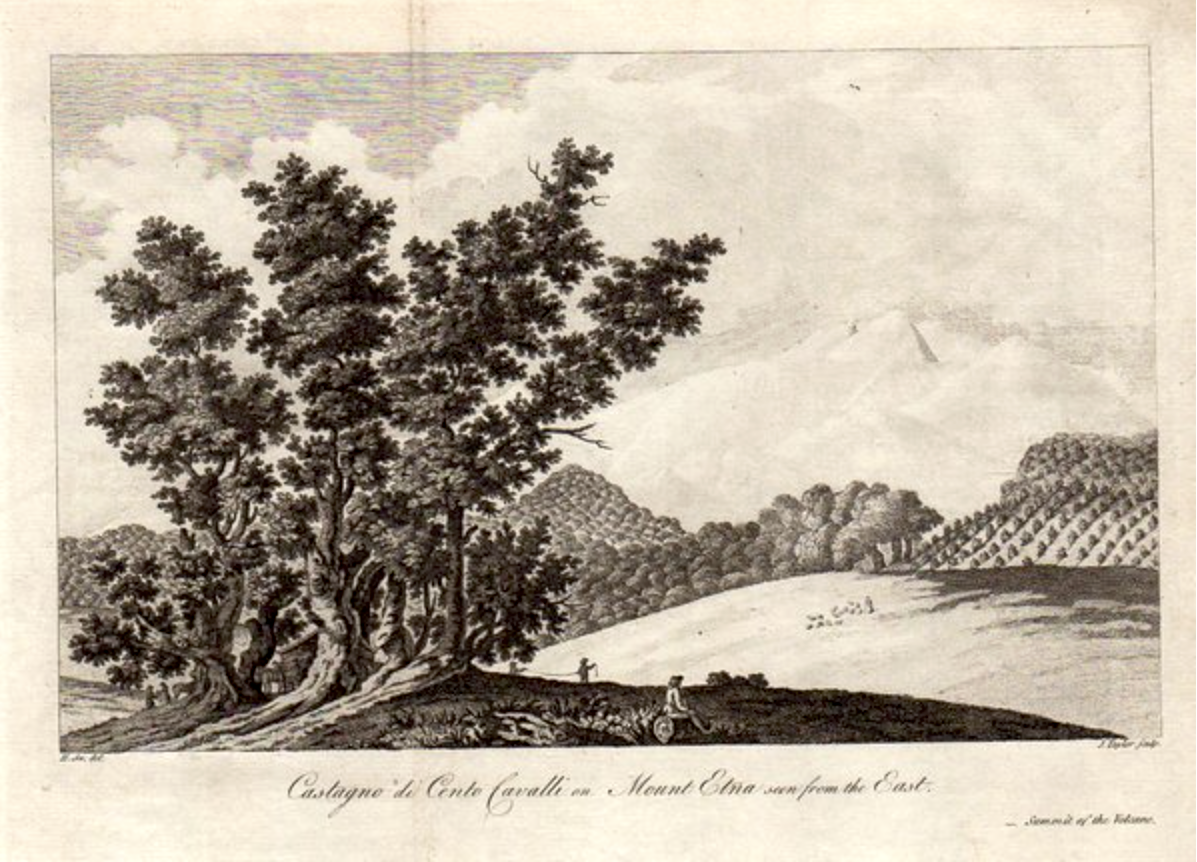 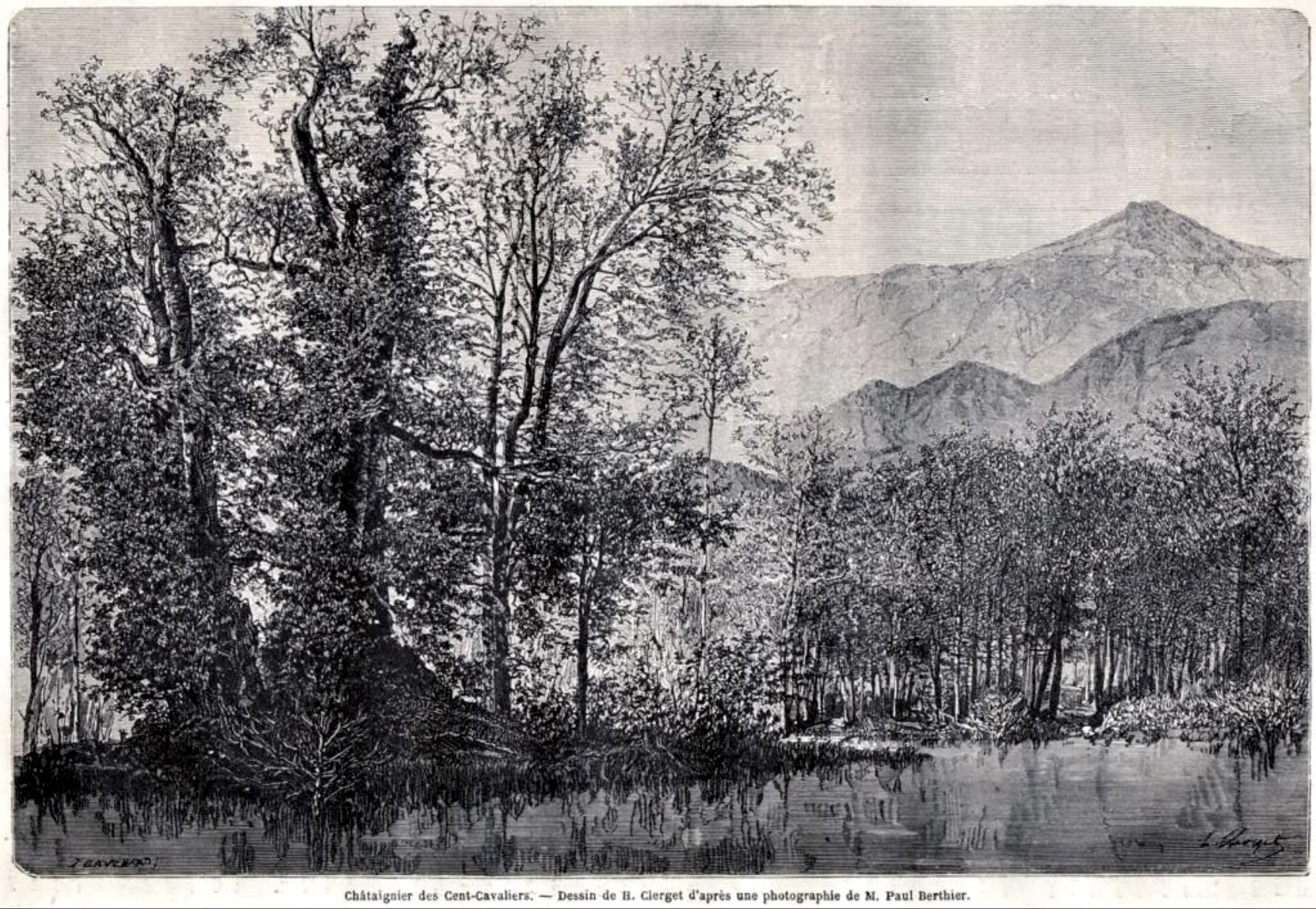 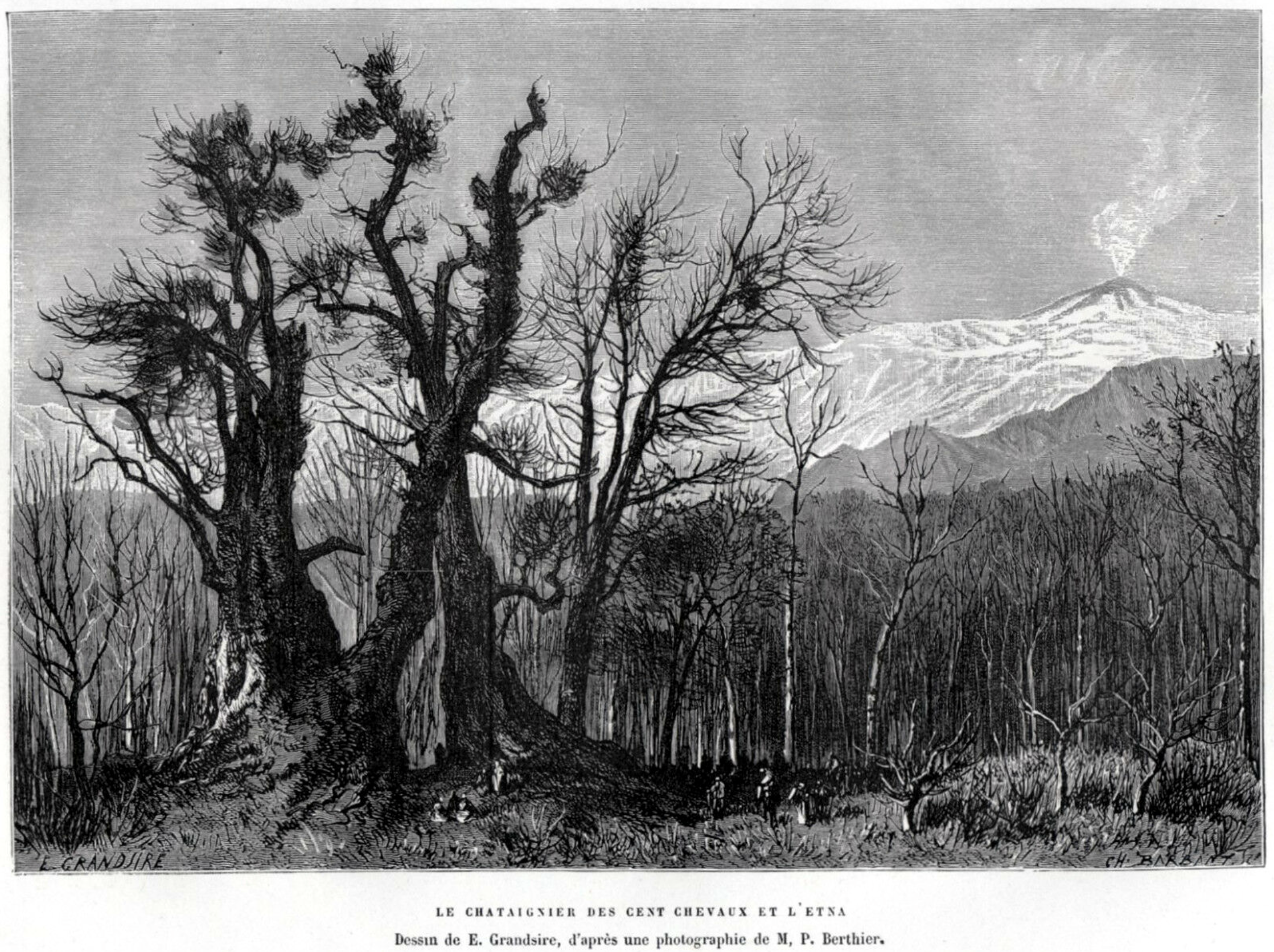 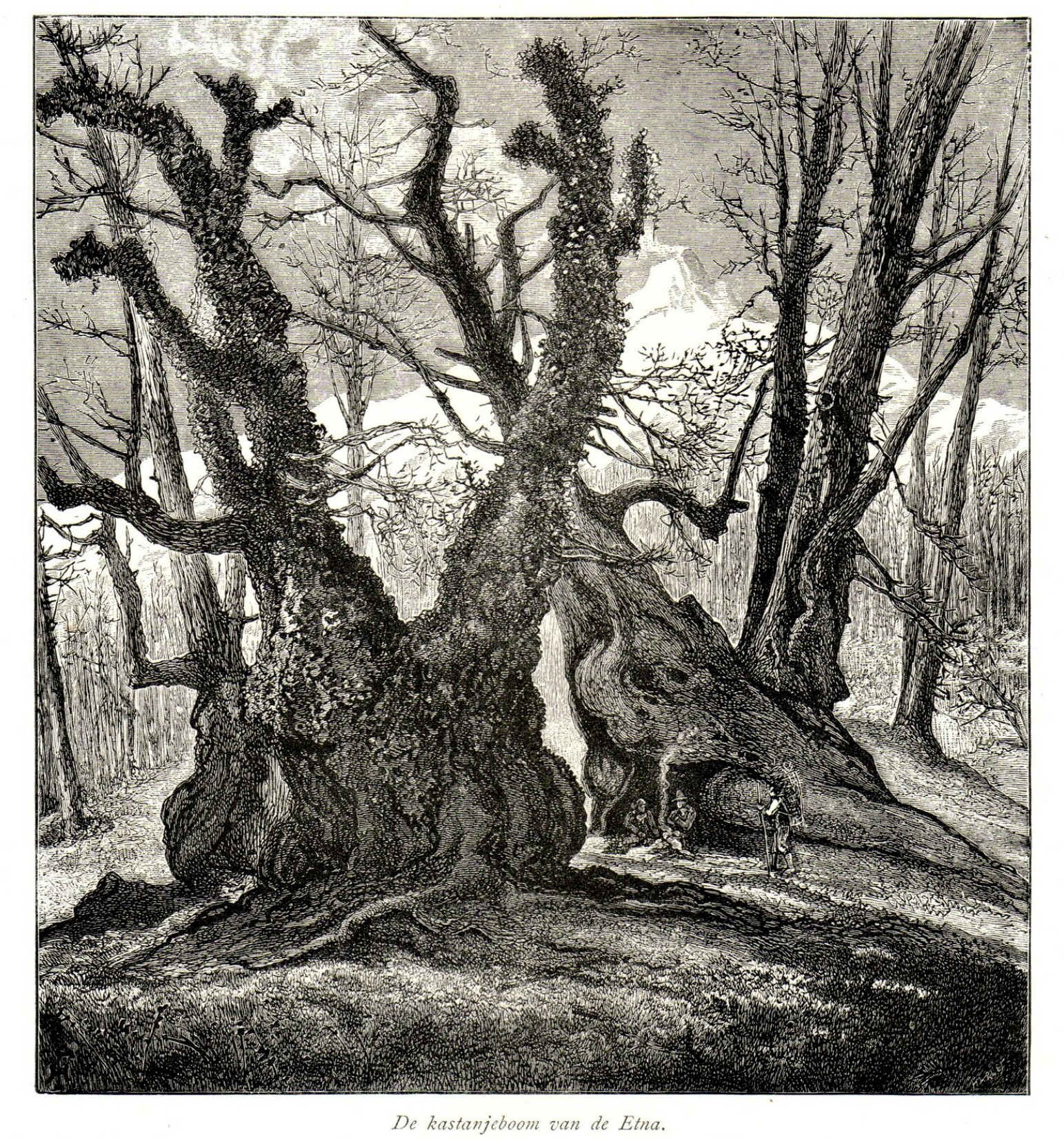 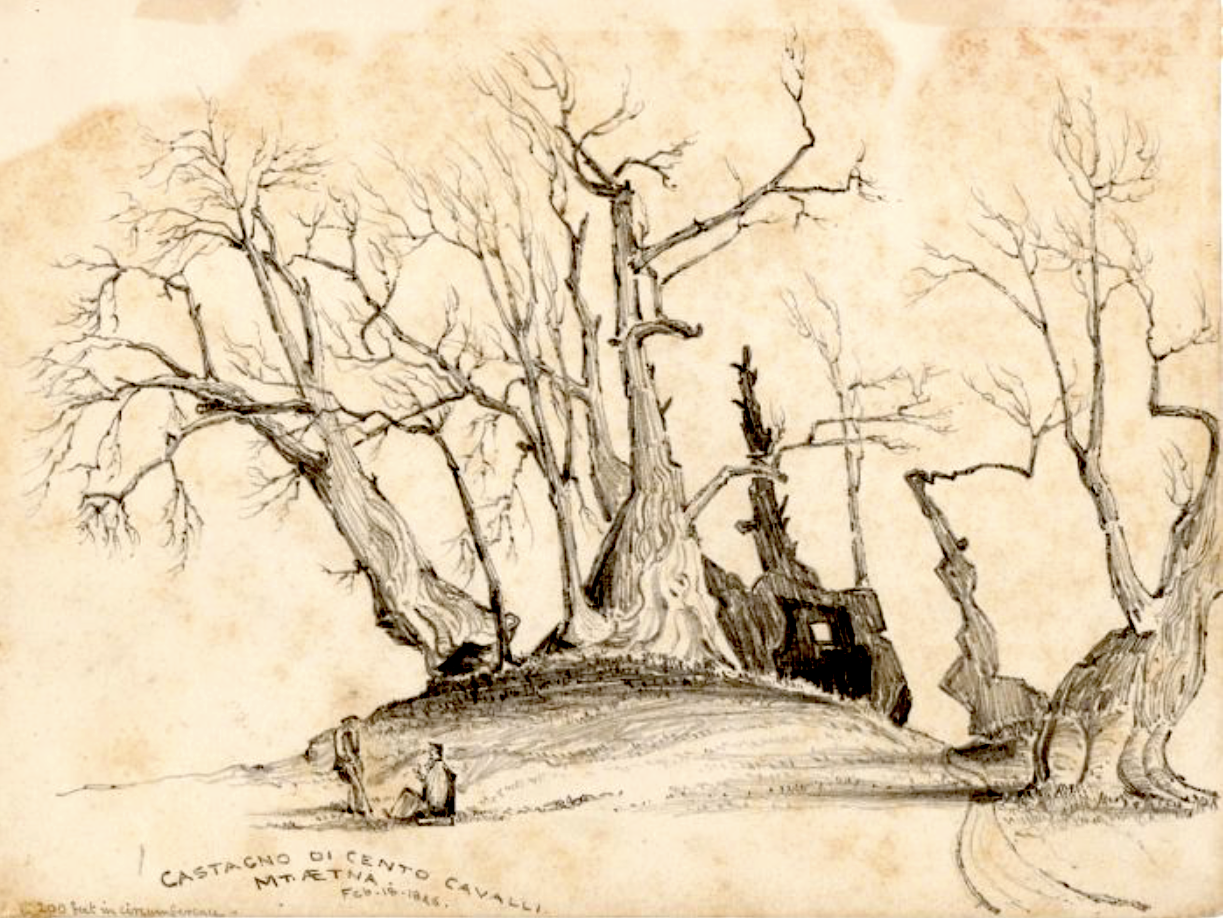 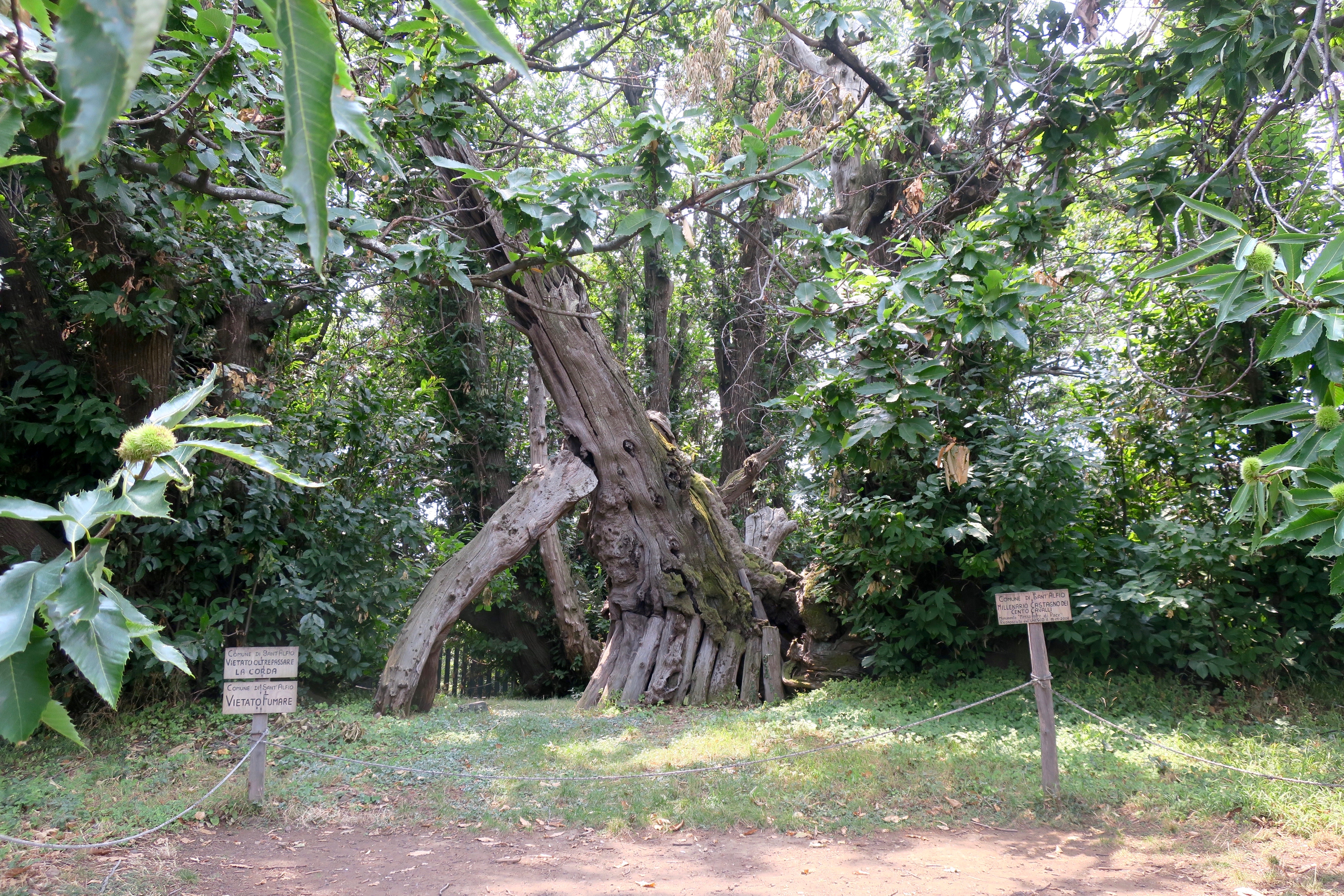 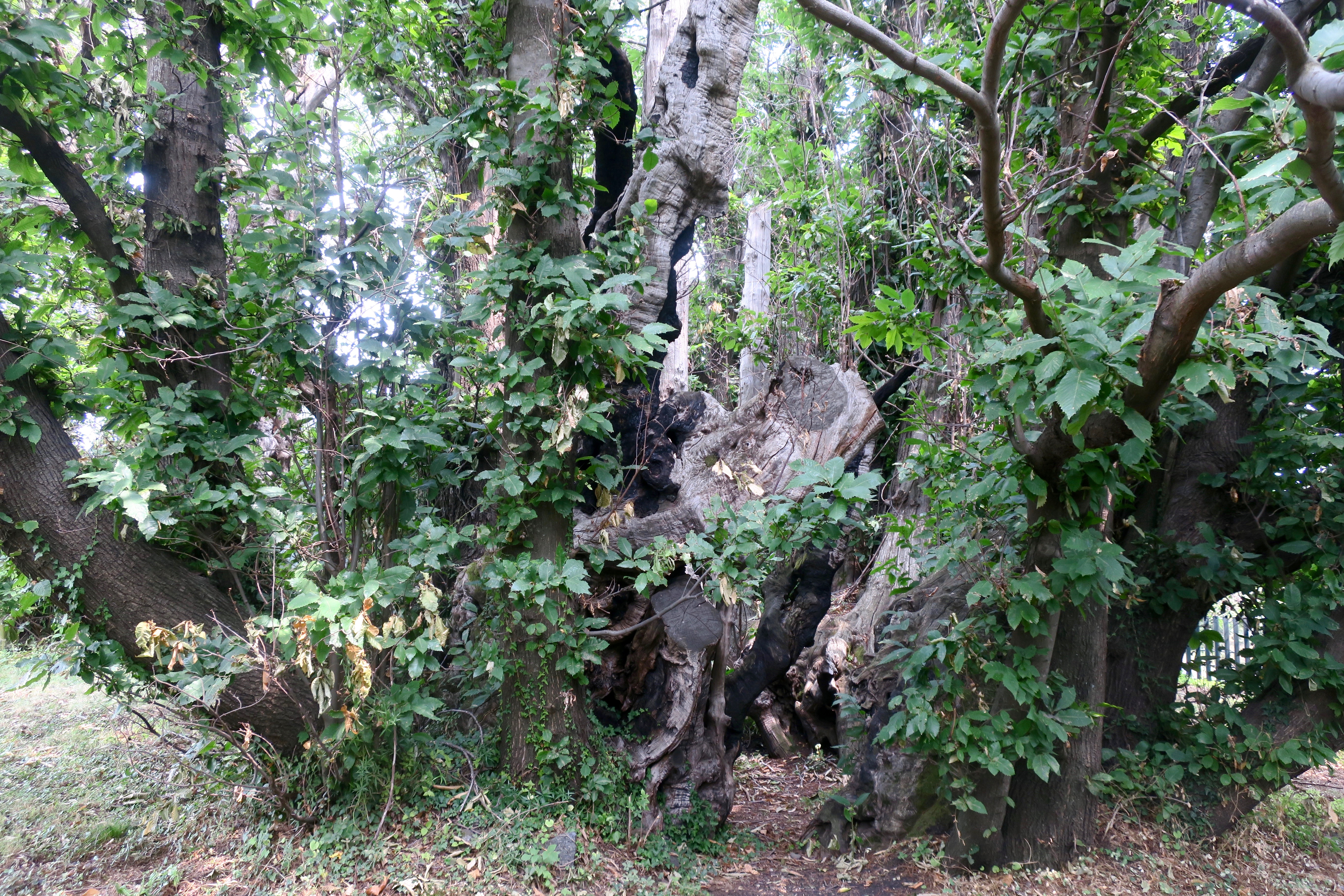 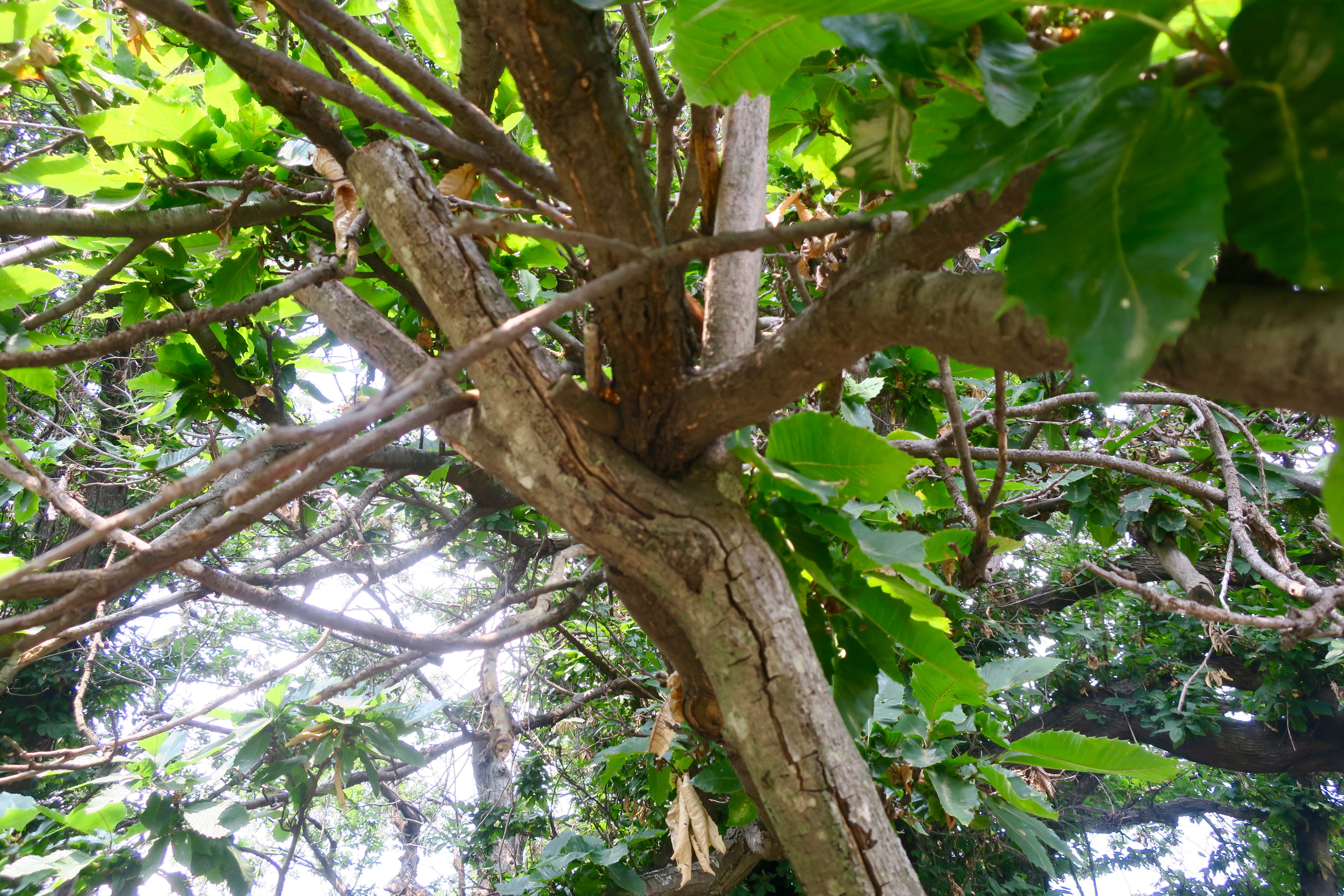 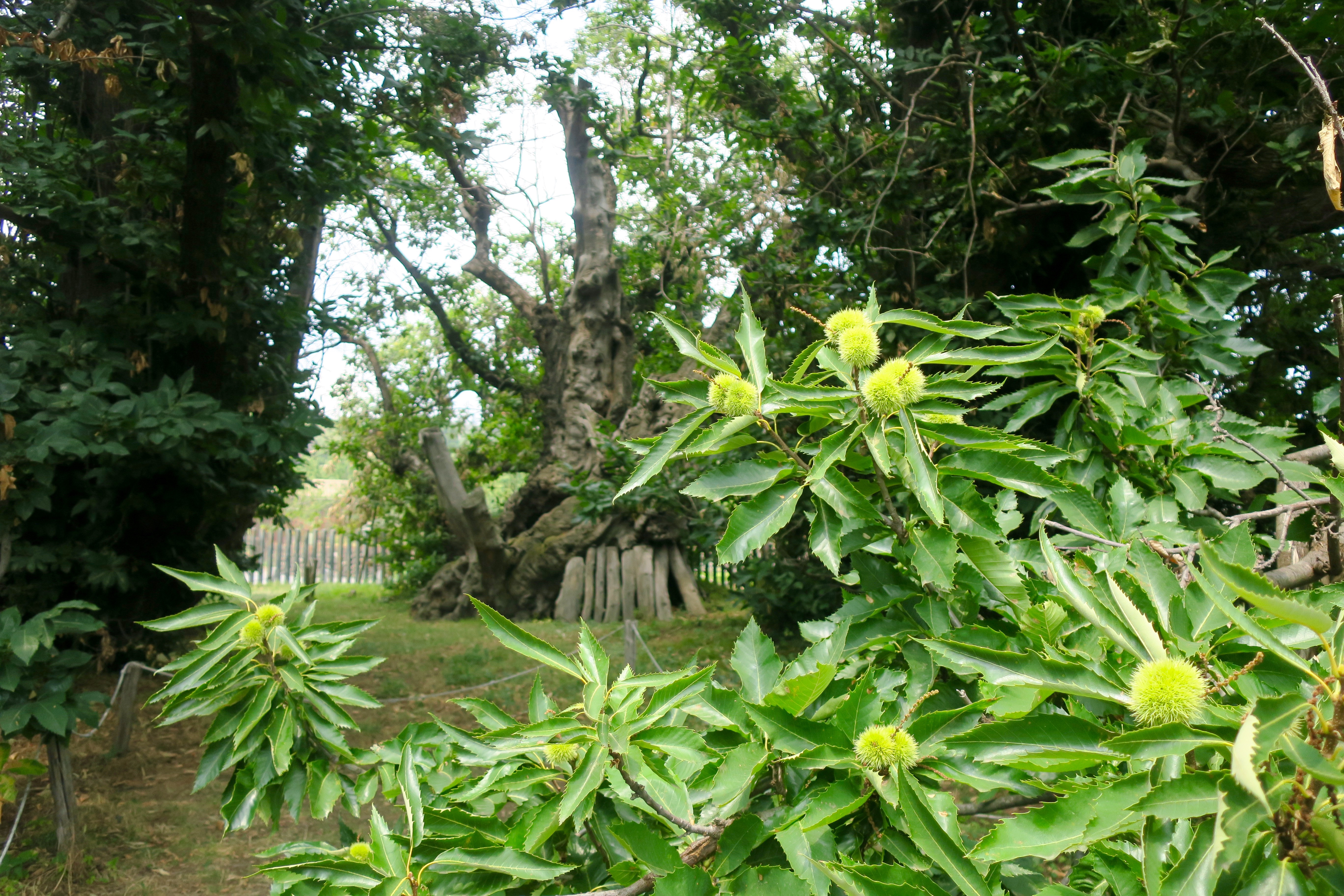 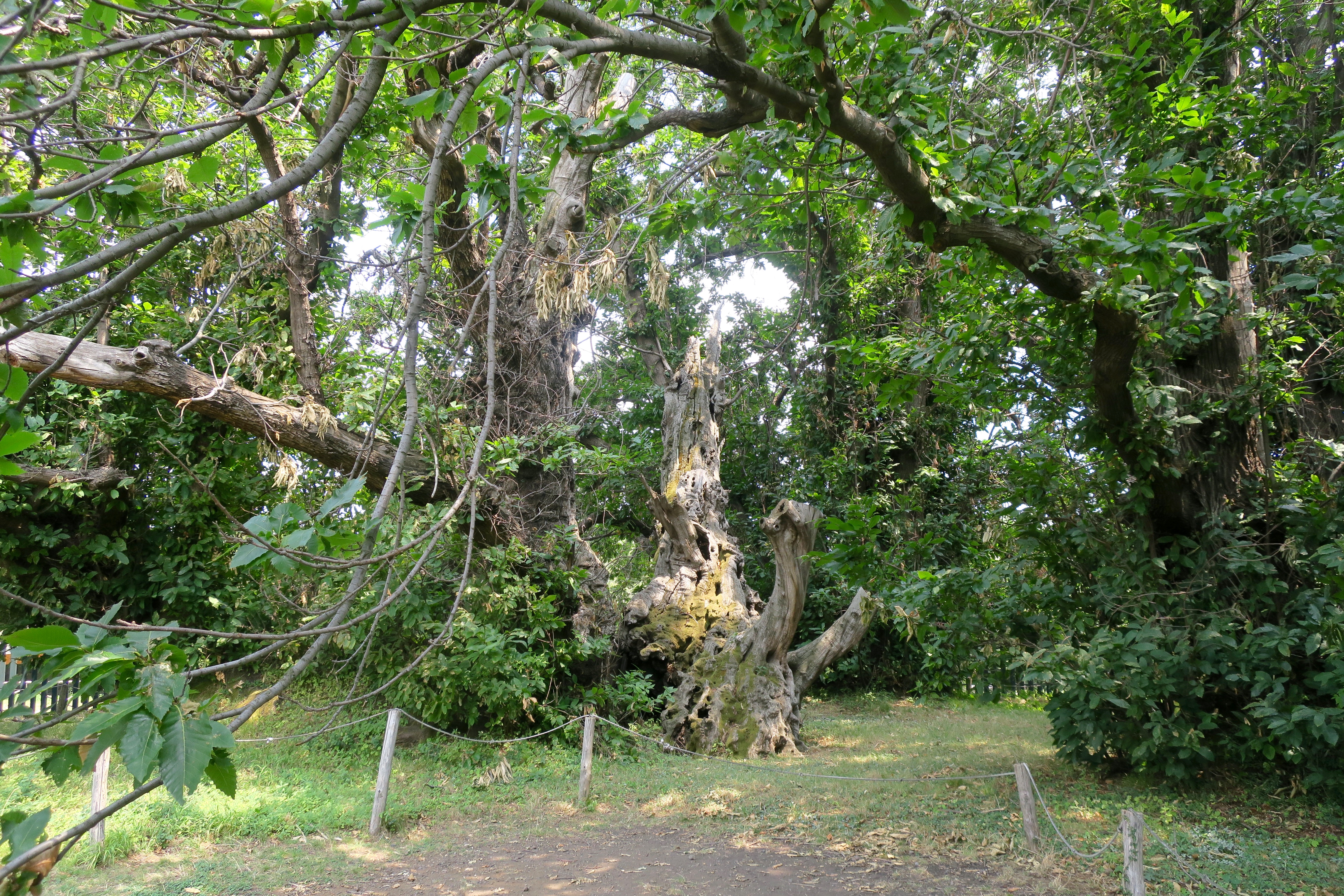 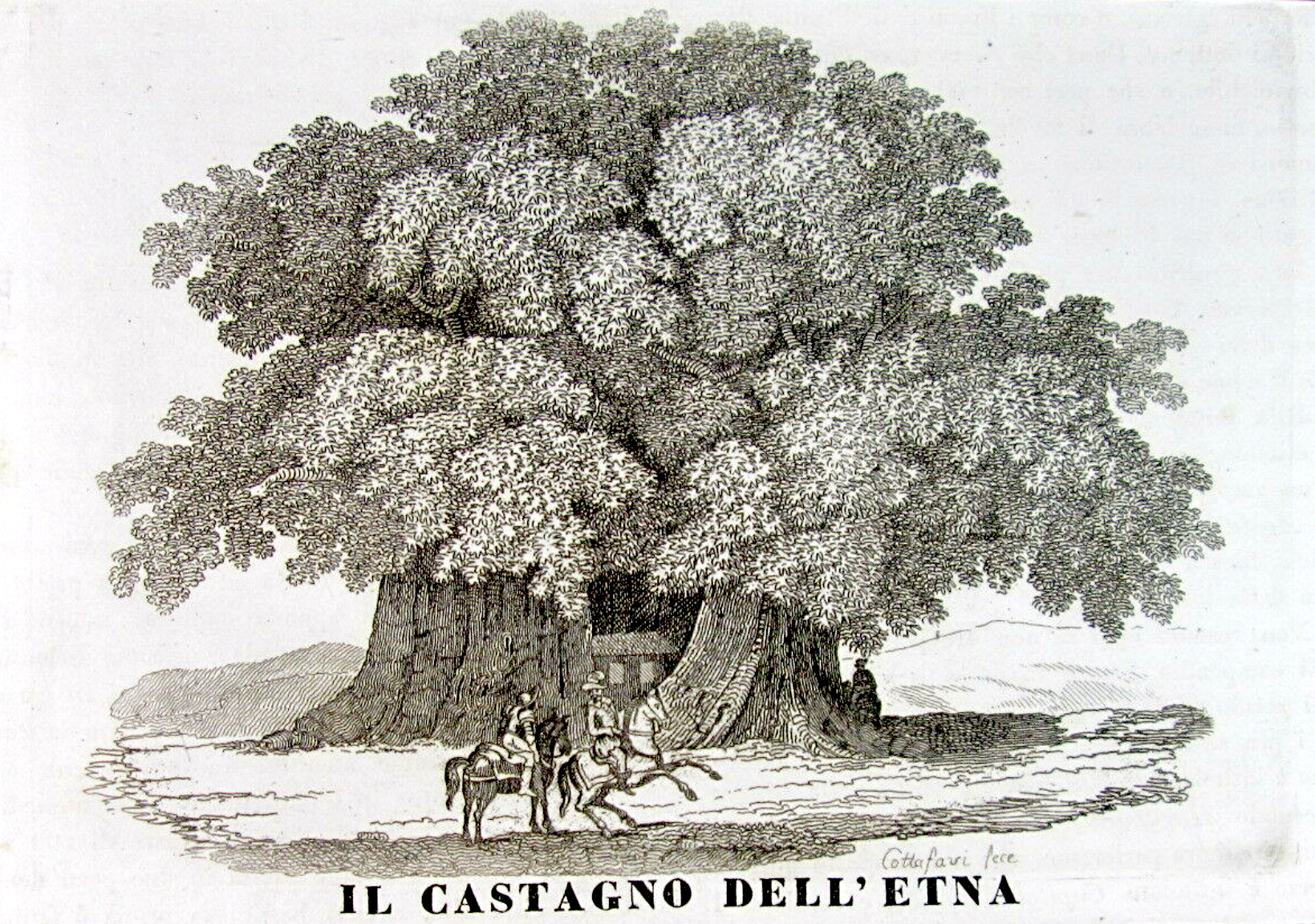 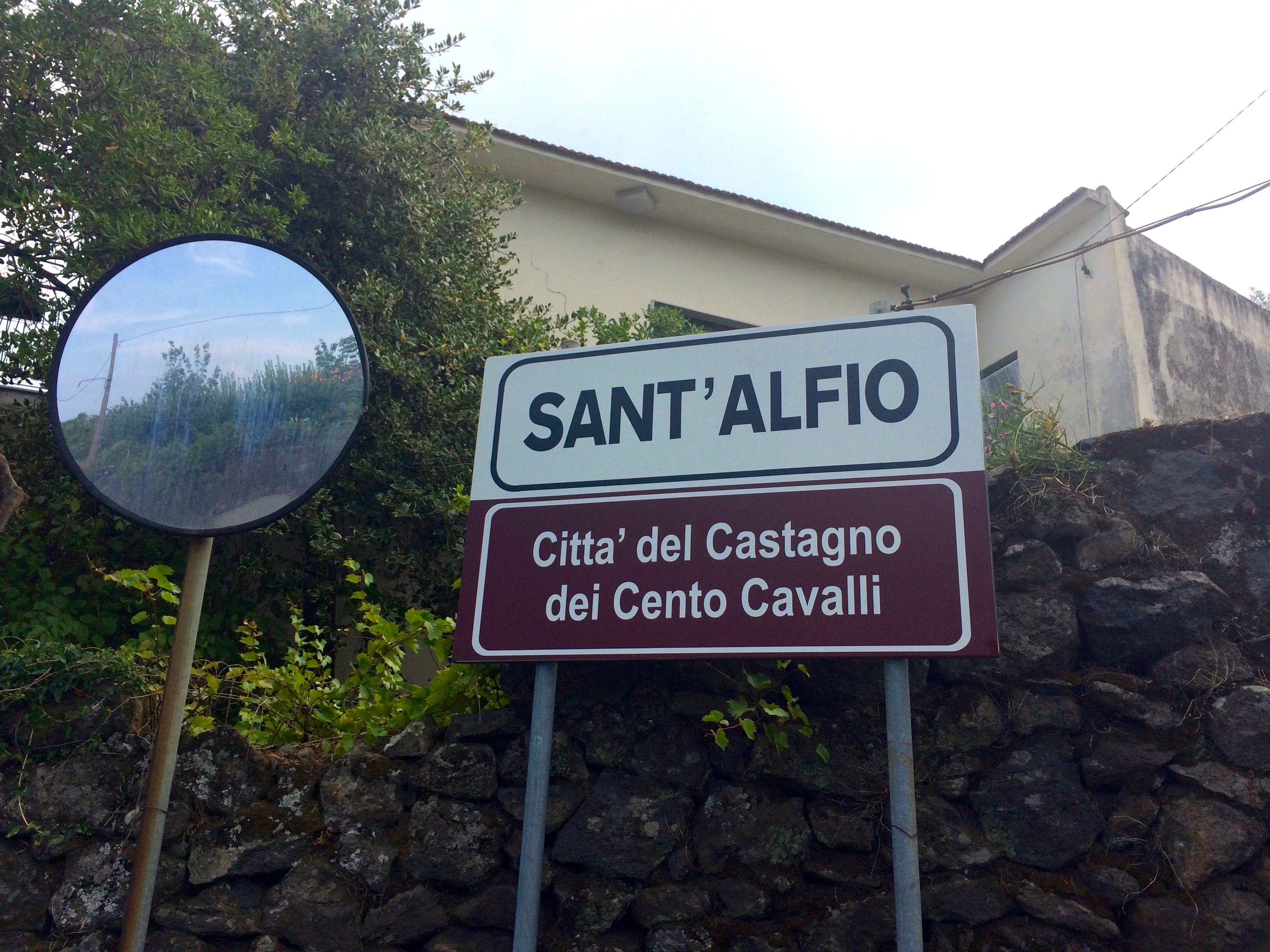 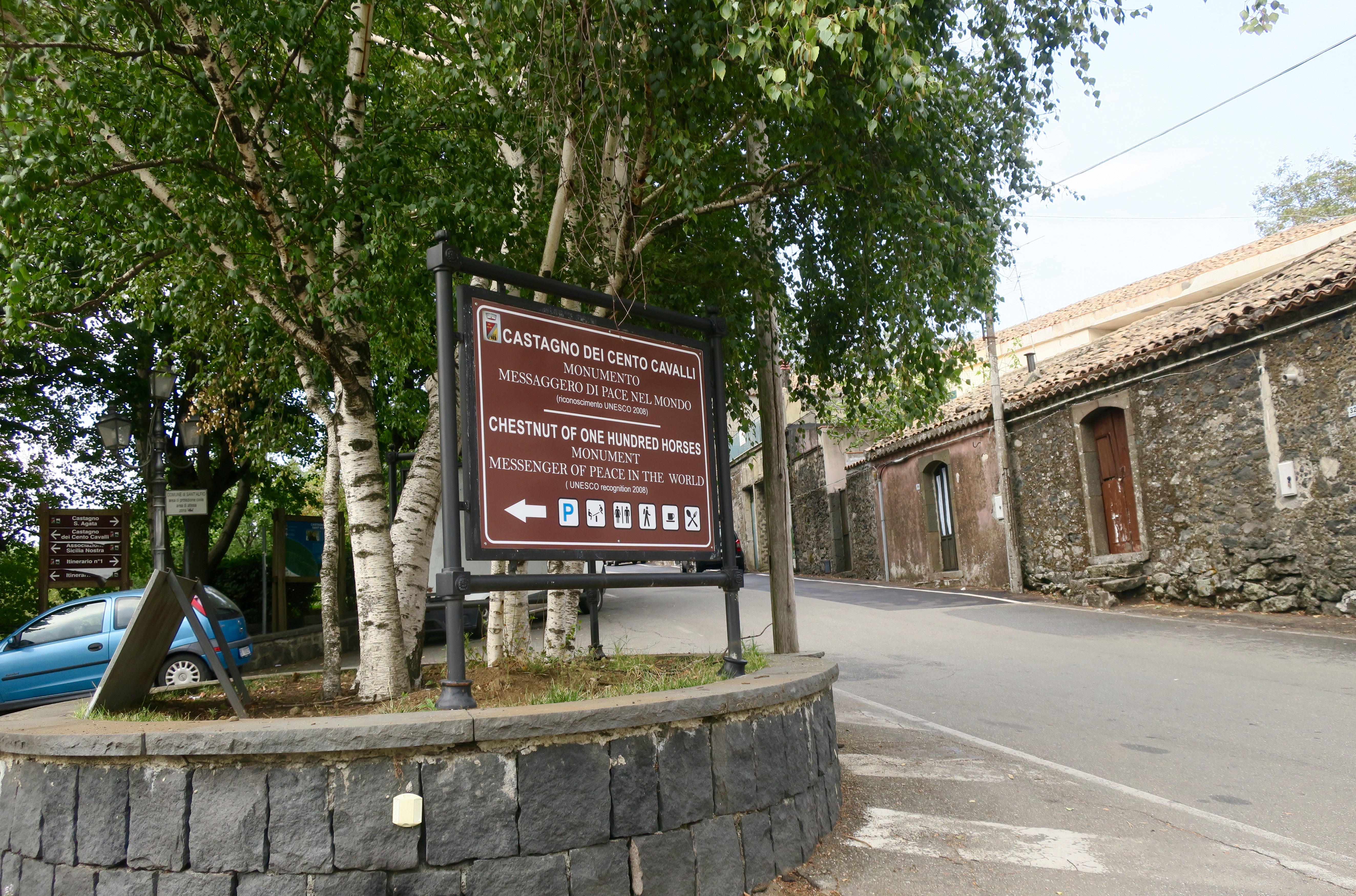 As we left I took photos of some of the many road signs celebrating this famous tree, but I failed to notice the sign hidden away at the back of this photo, above the blue car – Castagno S. Agata. Then months later, as I was drafting this blogpost, I went to get my hair cut and chatting to the barber I discovered he was from Sicily. Catania he said, so I mentioned Etna and he said he missed its power. I asked if he knew the tree of a hundred horses, and of course he did, his village was the next one along. And then he said if we had continued 700 metres further up the road from Sant’Alfio we would have come to another ancient and venerated tree. So I looked online and sure enough I found the Castagno Sant’Agata. Thank you Antonio, it looks amazing but it’s going to have to wait until next time… 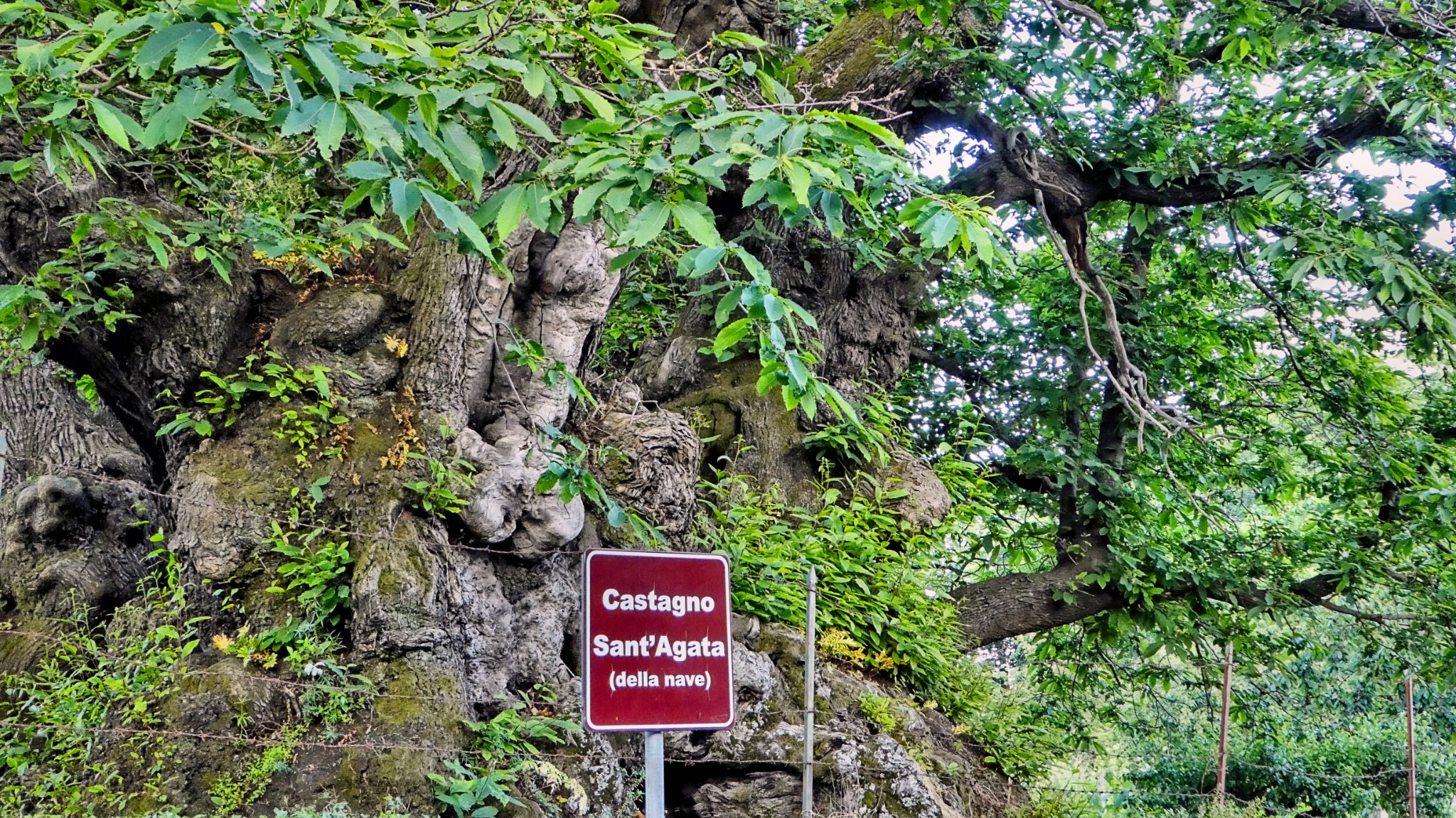 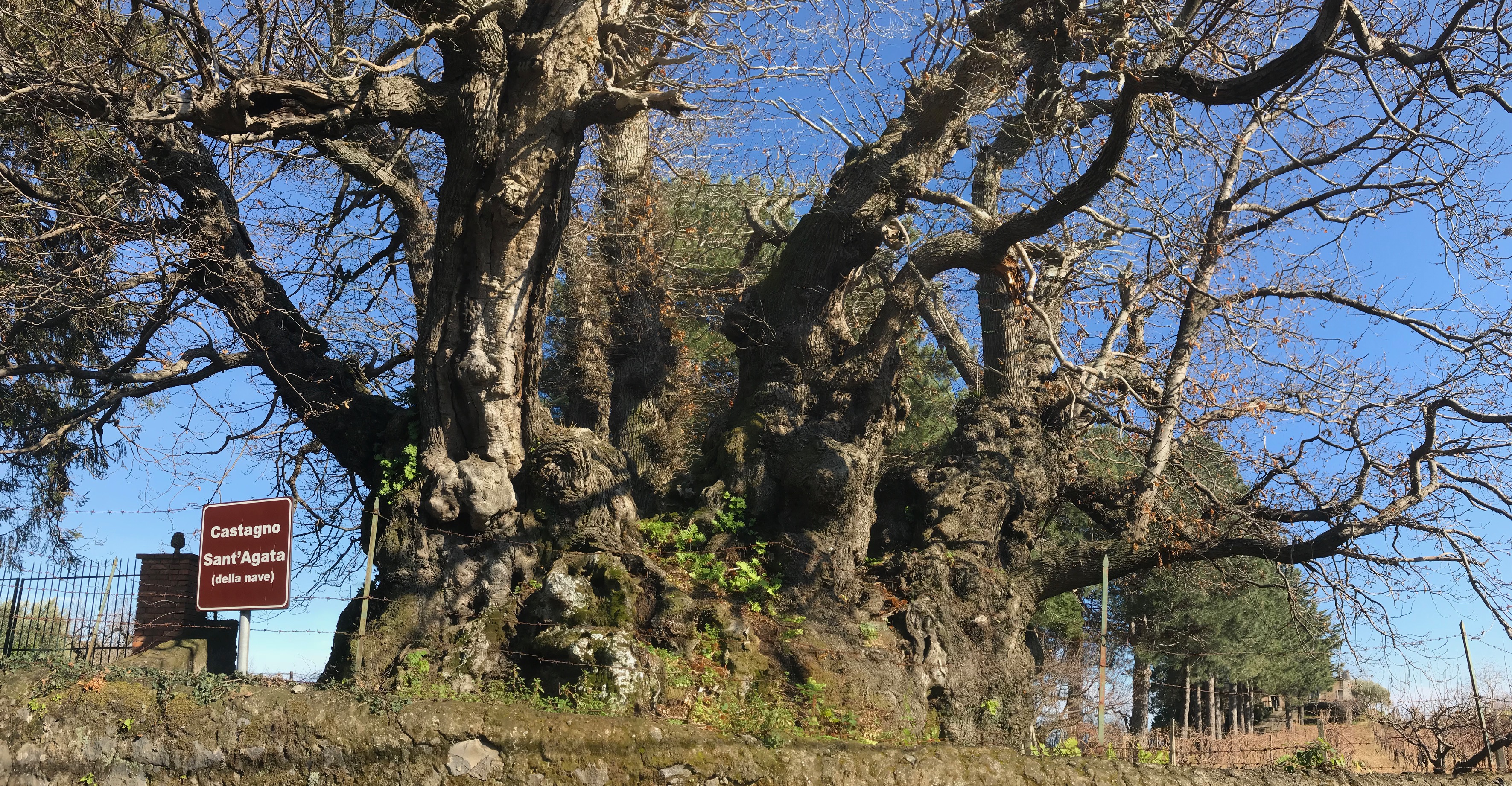 There is one sweet chestnut (Castanea sativa) in the front garden of the Villa privata in Mascali (municipality of Catania). This tree is called Castagno della Nave, also known as Castagno di Sant’Agata. The unique trunk is probably larger than the Castagno dei 100 Cavalli but difficult to measure because centuries of dust from Etna have covered the base of the trunk.

And then, two years later, thanks to Jill & Ted’s Tree-mendous Adventures, I found this little video, filmed on the inside of the fence!

Jill & Ted visit Sicily’s two oldest sweet chestnut trees: ‘Castagno Dei Cento Cavalli’ (Chestnut of 100 Horses) and ‘Castagno della Nave’ (The Ship Chestnut) in the village of Sant’ Alfio. The fact that they have survived for millennia on the eastern slopes of Mount Etna – an active volcano – makes them all the more remarkable.