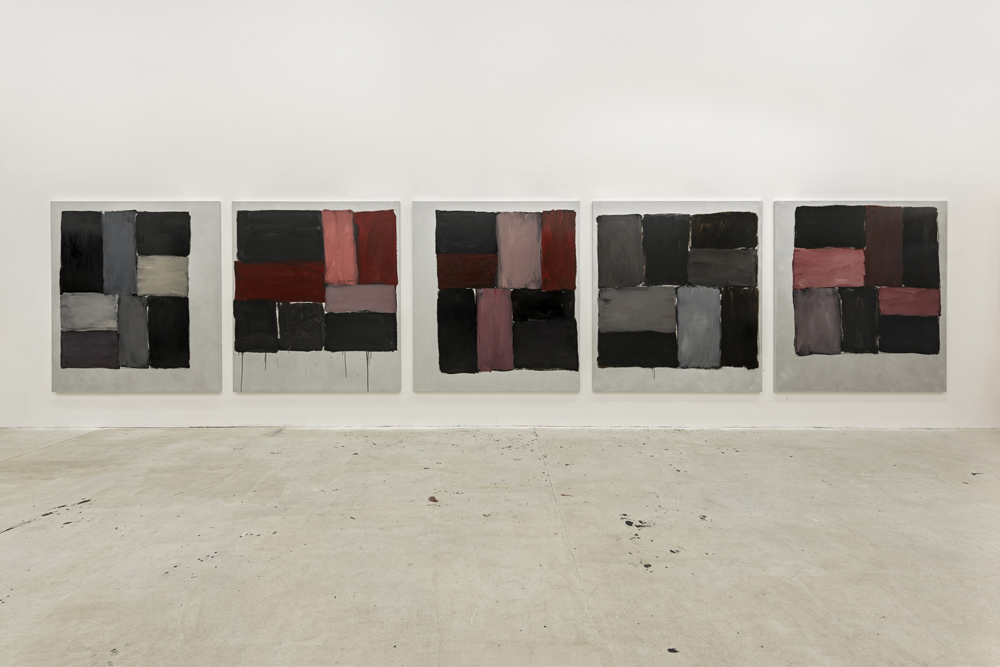 A quintet of five new paintings by Sean Scully entitled Kind of Red, at the Timothy Taylor Gallery. This is painting as a martial art: prepare, focus, get to work; there’s a no-nonsense approach to these blocks of colour thrown onto huge sheet metal plates, rocking in rhythm across the wall. It’s easy to imagine Scully dancing before them wielding a fat wall-painting brush. And in the exhibition catalogue there’s a wonderful, curious and perceptive essay by Richard Williams.

It should be no surprise to learn that Sean Scully was listening to Miles Davis’s ‘Kind of Blue’ when he set to work in a studio in a Bavarian forest on the five paintings that comprise the work he calls ‘Kind of Red’, or that he was thinking about the process Davis adopted during the creation of that classic album. Back in the spring of 1959 the trumpeter and his band spent just nine hours in a New York studio, spread over two days, while recording the five luminous tracks that redirected the course of jazz.

Jazz is the sound of surprise, in the words of the critic Whitney Balliett, but in this case the essential spontaneity was achieved only after the necessary preparation, both technical and intellectual. Bill Evans, the great pianist whose ideas were integral to the mood and themes of ‘Kind of Blue’, gave a valuable insight into the process at work during those hours. “There is a Japanese visual art in which the artist is forced to be spontaneous,” he wrote in the album’s original sleeve note. “He must paint on a thin stretched parchment with a special brush and black water paint in such a way that an unnatural or interrupted stroke will destroy the line or break through the parchment. Erasures or changes are impossible. These artists must practise a particular discipline, that of allowing the idea to express itself in communication with their hands in such a direct way that deliberation cannot interfere. The resulting pictures lack the complex composition and textures of ordinary painting, but it is said that those who see will find something captured that escapes explanation. The conviction that direct deed is the most meaningful reflection, I believe, has prompted the evolution of the extremely severe and unique discipines of the jazz or improvising musician.”

‘Kind of Blue’, a work of exquisite refinement and deceptive simplicity, was the product of this kind of disciplined spontaneity, and so is ‘Kind of Red’. “I made it in a kind of trance,” Scully says. “What also interested me was that Miles Davis made that whole thing so quickly, in only a couple of days. And these paintings I made in the same way, over five days. I got ready for them. In the same way, I think you can make something so that it comes out right, if you get ready for it. I’m not a person who sees that something’s come out wrong and then tries to make it right.”

He proposes a second analogy, this time with sport, another area of human endeavour and creativity that fascinates him. “Jonathan Edwards broke the world record for the triple-jump serially in a single night and he did it because everything was right,” he says. “In that moment, he knew everything – and it was as if God were lifting him up. It’s the same with boxing and martial arts. I did a lot of kick-boxing, which is a kind of moving Zen, and I think there are ways in which those kinds of activities are related to painting, at least to the kind of painting I do. You have to be fearless. And I am fearless.”

But music was what came to mind while looking at a retrospective of Scully’s triptychs at the Pallant House Gallery in Chichester last year. The delicate filaments featured in works from the 1970s suggest the strings of harps or guitars, ready to vibrate at the slightest touch. The bold tones and heavily worked textures of individual panels and their juxtaposition in more recent works, such as ‘Arles-Abend-Vincent’ (2013), evoke the timbre of instruments, singly and in combinations. Elsewhere in his work, the contrasting panels he imposed on certain paintings in the late 1980s (such as ‘Between You and Me’ or ‘Why and What’) function very much like solo passages in the grander design of a complete orchestral piece. The phase-shifting repetition of ‘Red Light’ (1971) seems to parallel the grid-like structures found in the near-contemporaneous compositions of such early American minimalists as Terry Riley (‘In C’, 1965), Philip Glass (‘Music in 12 Parts’, 1971-74) and Steve Reich (‘Music for 18 Musicians’, 1976). So it was no surprise to discover that music has always played a significant role in the painter’s life.

From a certain perspective, indeed, it would be easy to imagine the young Scully’s creative instinct finding an entirely different mode of expression. Born in 1945, during his teenage years he fell in love with the music of black America, seizing upon it as an adopted language. First came rock and roll, followed by the blues, and then jazz. But unlike John Lennon, Pete Townshend, Ray Davies, Ian Dury, Bryan Ferry and other students at British art colleges in the 1960s, Scully did not allow that enthusiasm to lead him away from his formal art training and towards a career in music. “I was doing something entirely different, something more ancient,” he says. “Something in me always wanted to play the long game. And that’s a short game. Painting is a long game.”

Music, however, had provided the “exotic trapdoor”, as he puts it, that enabled him to escape a dismal period of his early life, spent in suburban Sydenham, a handful of miles but a whole world away from the centre of London (“If I had a choice of living in suburbia or being dead, I’d rather be dead,” he told an interviewer in 1999). “I was a Teddy Boy, a Mod and a Beat, in that order,” he says. “That was my intellectual progression. At 13 or 14 I was a singer in a band, doing ‘Hound Dog’ and ‘Summertime Blues’. I adored Gene Vincent. He made all that B-grade rock and roll, but he also had a great tenderness in his voice. And when I was a little bit older, I found the blues. Well, I had the blues, big-time. I had a very unhappy childhood and the blues corresponded with me perfectly.”

During his Mod years – “I had a Lambretta, the whole business” – he ran a blues club in a room over a pub in Bromley High Street. “We listened to records. I’d go up to Soho every week and bring back something by John Lee Hooker, Sonny Boy Williamson or Slim Harpo. I loved their directness, the dignity, the lack of elaboration. ‘I’d rather go blind, boy, than to see you walk away from me’ – that’s Etta James. It was instinctive.” And what was curious, he recalls, is that English audiences were more receptive to this music than Americans. “They couldn’t take it on because of slavery, even though England had started that off – they were first in but they were also first out, so they could point the finger. The English went nuts for it.” The club closed when the police moved in after a turf war with a gang from a rival pub.

He learned about modern jazz in an Oxford Street club and joined the sometimes violent anti-war demonstrations in Trafalgar Square, where folk singers alternated with the speeches of Bertrand Russell, the great peace campaigner. As he talks about those days, he quotes the lyrics of Bob Dylan’s ‘Masters of War’: “‘For threatenin’ my baby, unborn and unnamed / You ain’t worth the blood that runs in your veins’ – those are the kinds of things that touch me deeply.” In 1989 he would name a painting after the title of John Coltrane’s ‘Dakar’, and the following year some more lines from Dylan, this time from ‘Chimes of Freedom’ (“Through the mad mystic hammering of the wild ripping hail / The sky cracked its poems in naked wonder”), would inspire the black and white painting titled ‘Hammering’.

“Basically,” he says, “I’m a romantic. I can’t fix that now. It’s too late. There always has to be something morally driven in a work, something profoundly human.”

Today he listens to many kinds of music, with particular preferences for chamber music (“the cello is my favourite instrument – a very textured sound, quite indistinct, which corresponds to me”), to Beethoven, to Brahms (“almost my favourite composer of all”), to Leonard Cohen, to Talking Heads (led by another former art student, David Byrne), and to U2, his friend Bono’s band. He loves Lana Del Rey and her song ‘Lolita’, inspired by and quoting from Nabokov. “That’s interesting to me: how high art gets into popular art, and the information is disseminated.”

Just as Davis brought together the distinctive instrumental voices of the individual musicians featured on his classic recording, so Scully mixed his oil paints for ‘Kind of Red’: the shades of grey, black and red that form the blocks of these striking pieces. “The colour is utterly intuitive,” he says. “I don’t think about it at all. People ask me about it, and I can’t explain it. It’s something I’m just able to do, so I don’t have to explain it to myself. It’s like having a beautiful girlfriend. People say, ‘Why is she going out with him?’ The best thing is not to think about it. It’s a gift from God. You just hope it never leaves you.

“Sometimes I make a red to start a painting, but then I’ll find myself picking up a bucket with another colour. I’ve changed my mind. The act of mixing the red was just a way of starting off. And the paintings aren’t stable at all. They move around in circles, with a kind of tumbling motion that carries you to the next panel.”

Just as Davis worked, with Bill Evans’s help, on the modes that were to replace conventional harmonic structures throughout most of ‘Kind of Blue’, so Scully devised the format and the ground, a set of five large aluminium sheets, on which the ‘Kind of Red’ paintings were to be made. The bare metal of the working surface remains exposed beyond the edges of the painted area; in two of the pieces, drips run down towards the bottom edge. “I wanted to set up something that was very rhythmical,” he says, “so that the images were on the support but not secured to it, so that they could float around and set up these rhythms between them, up and down and from side to side, playing with the edges. Those drips gave them a kind of lift-off.

“It’s not over-worked. When you make a painting, you’re thinking: don’t think too much, or it can turn you into a strategist. You’ve got to think enough, but not enough to obstruct the muse.”

And all of it with an inherent musicality. Brushstroke and paint together create something that can evoke the attack of a bow on the string of a cello, or the way breath and reed combine to produce the grain in a saxophonist’s sound. Scully’s paintings are, in a very exact sense, tone poems.

Painting, he says, is “like writing the music and playing the instrument simultaneously. You can shut time down and see it all at once.” Here is another parallel with jazz, a form of instant composition in which predetermined structure and improvised content are in constant dialogue. His ‘Kind of Red’ does not look like Davis’s ‘Kind of Blue’ sounds: no such simple transliteration from one language to the other would be possible or desirable. But in the work of the painter and the trumpeter there are shared instincts and emotions that cannot be turned into words, and are all the stronger for it. 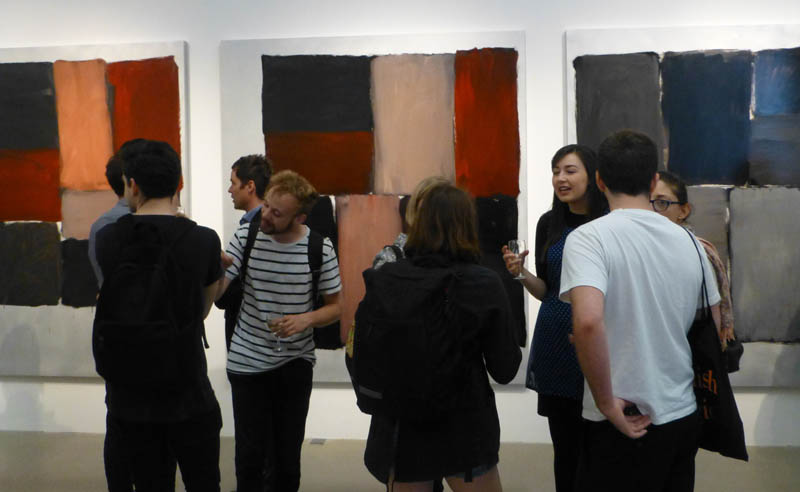 2 thoughts on “Kind Of Red”