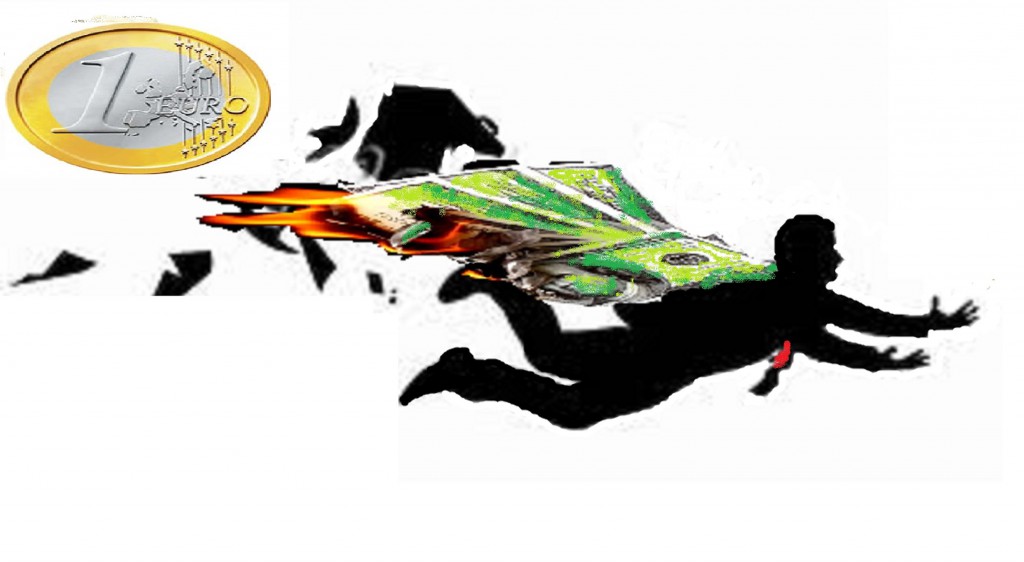 So we’re all looking forward (in no particular order) to Christmas, The Mayan ‘Apocalypse’ 21/12/12, The Euro Apocalypse / the imminent Bond Market collapse, the next high flying celebrity to crash and burn, the next Flood, the first nuclear war, escape to the Moon/Mars…. etc. And I was thinking how could a painter find any relevance with all this going on. But the internet is a wonderful thing for connecting anything to everything and a reminder that these type of events constantly recur, that the oldest themes in art are the best and that there’s nothing new under the sun. 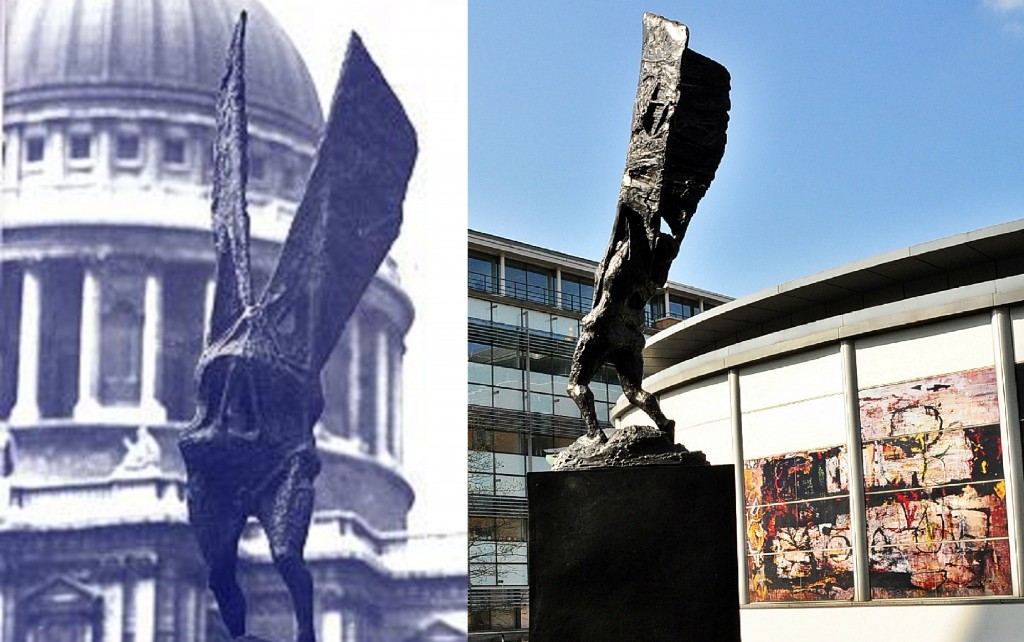 About ten years ago I discovered Michael Ayrton’s Icarus III in the garden of Old Change Court, St Paul’s, when some of my larger paintings were reproduced to decorate the outside wall of a restaurant there (two of them with a post apocalyptic flood theme – they’re still there). 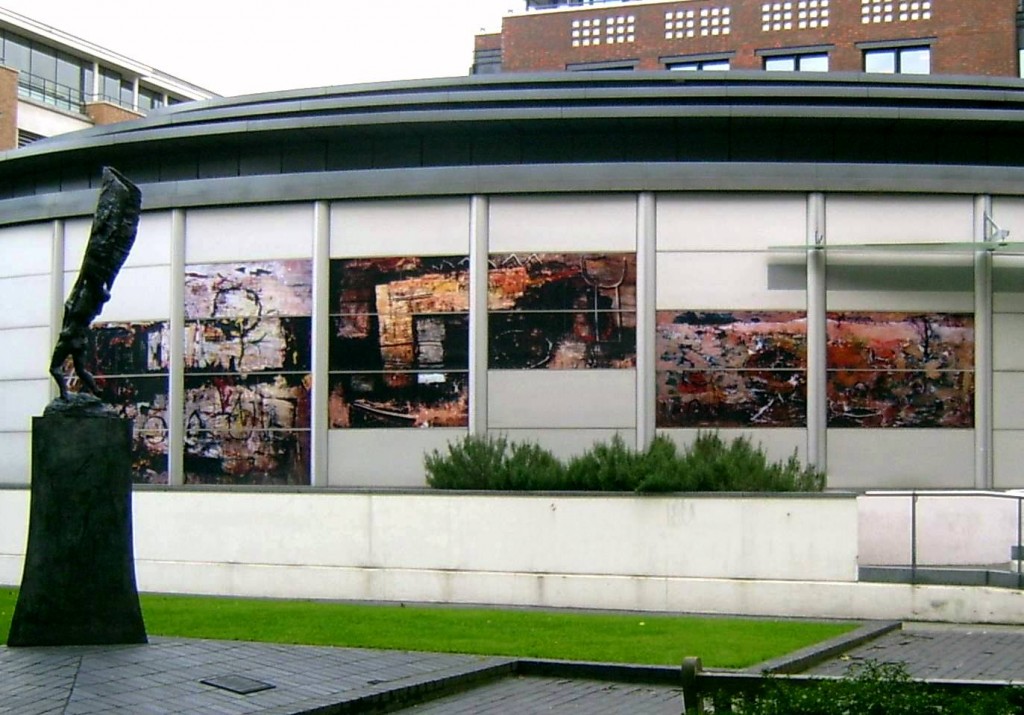 I had used the Icarus theme in my own paintings before, but it was only when I recently heard from a great friend of mine, artist Adrian Spurr, who now has a studio in the Australian Outback and who has also explored the Icarus theme, that I started to research and learn how artists such as Ayrton had developed the visual potential of Icarus and other related forms. (Ayrton’s Minotaur lurks a stone’s throw away from St Paul’s within the maze of the Barbican.) 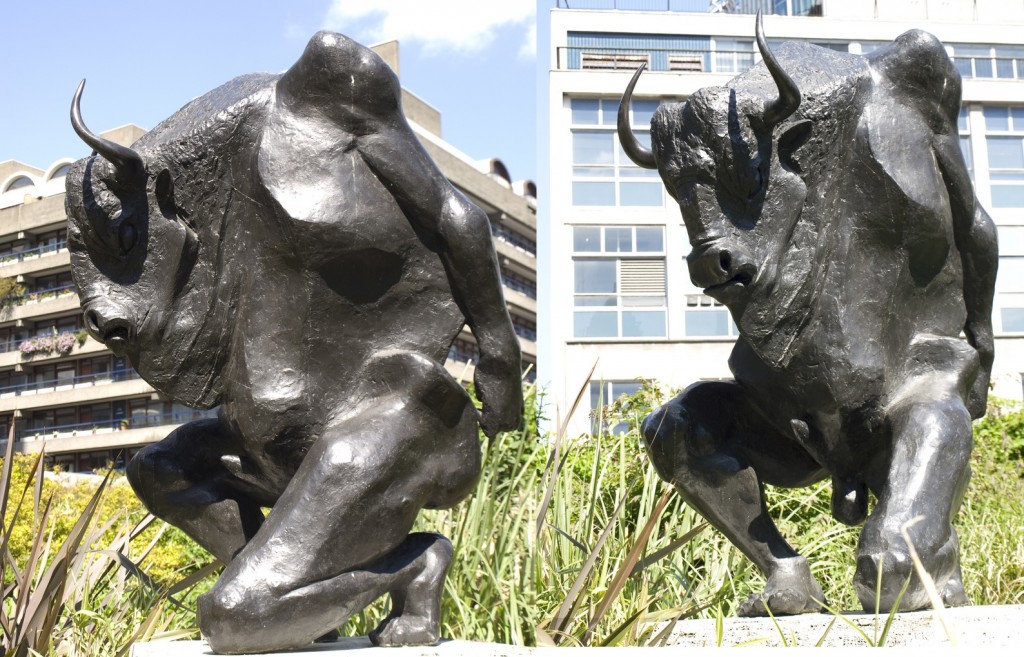 I found this poignant comment on Ayrton in an essay by J.C. Leissring:

There is a peculiar mystery about Michael Ayrton that I am unable to unravel from this position in space and time. It may come to pass that at some future time I will encounter just the person who will tell me why Ayrton has not achieved the kind of artistic reputation he clearly deserves and why he seems to be hidden in the cracks of art history. This will likely not always be so.

It’s as if Ayrton’s lack of prominence mirrors the demise of Icarus in Pieter Bruegel’s painting where only the inverted disappearing leg of Icarus is visible in the sea, far away and unnoticed. 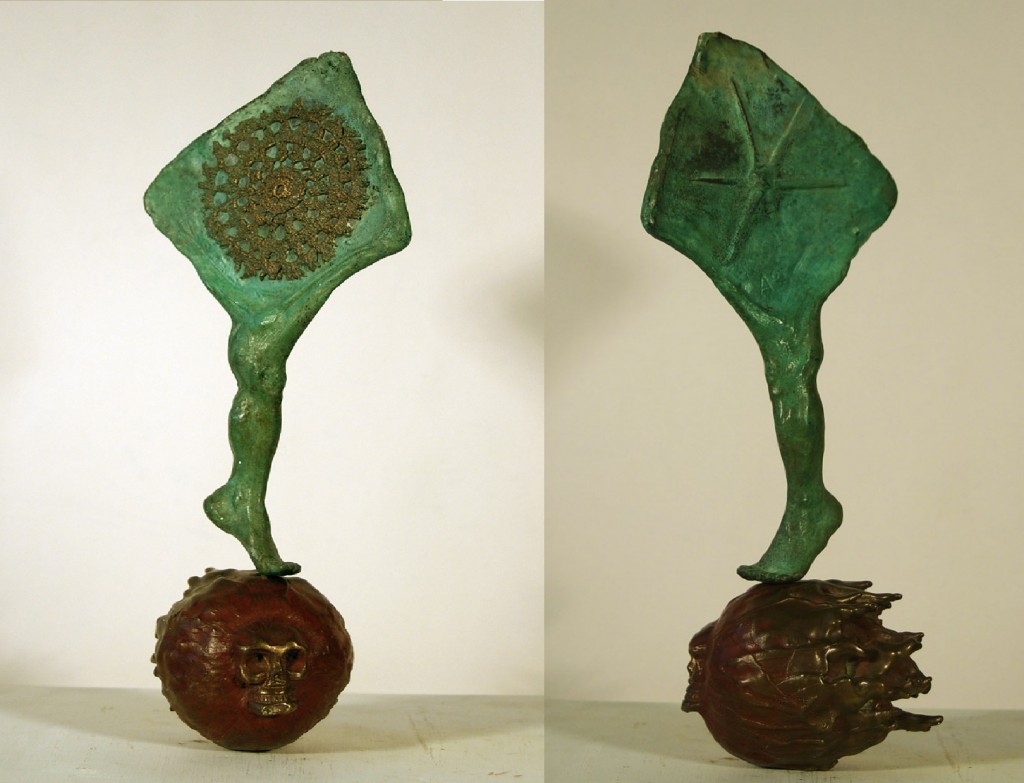 Spurr has taken just this leg of Icarus making ‘one small step, one giant leap’ as it appears to harness the motion of the sun/comet. Placed above it is an image of the Sputnik spacecraft, making a connection between past and future. Since he made the sculpture in 2005, the 100 year Project Icarus has been born (2009) to design an interstellar space probe that will travel beyond our sun. How fitting it is that this component of humanity’s potential migration from earth and transformation from a type 0 civilisation to type 1 civilisation should bear the name of Icarus. A name that symbolises that very human instinct to push things to the limit.

Our civilisation is around 0.73 on the civilisation scale and slowly climbing, I wonder if we get a present when we reach type 1 status, Chris Dann, Weirdwarp.

Keep earth’s location a secret. Do everything by robot or remote operator and mankind’s future will be bright indeed. Consider it a road map to the future, if you will. If you like this road map, please pass it to your friends because we are stagnanting here on earth and we need a new future! 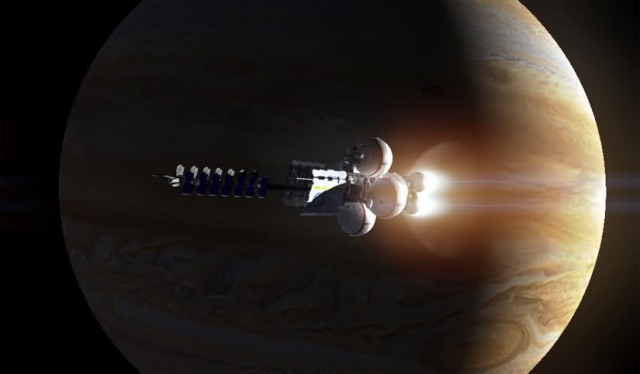 Project Icarus is a joint endeavor by the Tau Zero Foundation and the British Interplanetary Society, to design an interstellar spacecraft. This first potential mission would not carry humans onboard, but would aim to send robotic probes to investigate a nearby star and its environs. Subsequent missions might use robots to harness energy and resources.

Icarus was also the name of The Planet of The Apes spaceship which crashes back to Earth 2000 years into the future after a nuclear apocalypse. The astronauts do not recognise their own planet until the final scene when the one survivor finds the charred remains of the Statue of Liberty sunken into a desolate beach.

These images together could reconstruct the famous sequence in Kubrick’s 2001, A Space Odyssey where the edit jump cuts a million years from the ape man tossing a bone spinning into the air seeming to transform into the manned space station hanging in orbit above the spinning earth. Only here the island of Ikaria, supposedly near where he fell, resembles a giant wing, a natural icon to man’s Icarus impulse.

Ayrton was emotionally moved by the legend of Theseus and took the thread of it into himself, somehow becoming, in the process, a kind of latter-day Daedalus, successfully completing in solid materials the stuff of Virgil’s story. Thus, Ayrton designed and built a monumental maze in Troy, New York, finalizing the event with an almost theoretically impossible cast of a honeycomb in pure gold. 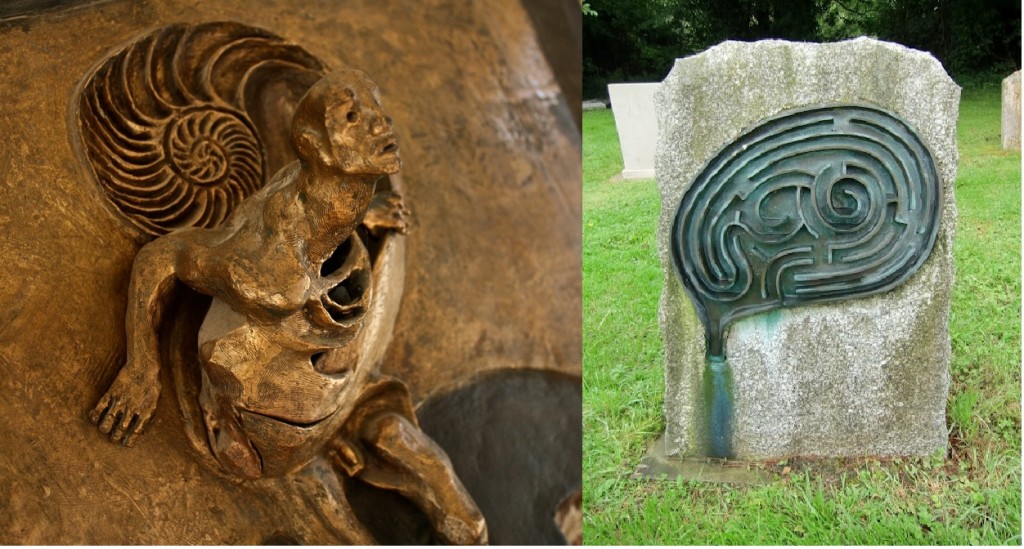 Alas, I was unable to find any images of Ayrton’s Troy Maze or gold honeycomb on the internet, leaving my easy web blogyssey incomplete – for now – but I feel confident that Google, in the style of Stanislaw Lem’s giant brain planet, Solaris, will shortly conjure up a virtual facsimile of the very thing I’m searching for.

And now suddenly it’s there.. just like the final scene of Tarkovsky’s film Solaris when from his memory the astronaut’s home (with his father like Daedalus waiting for his return) is recreated by the planet, on the planet. 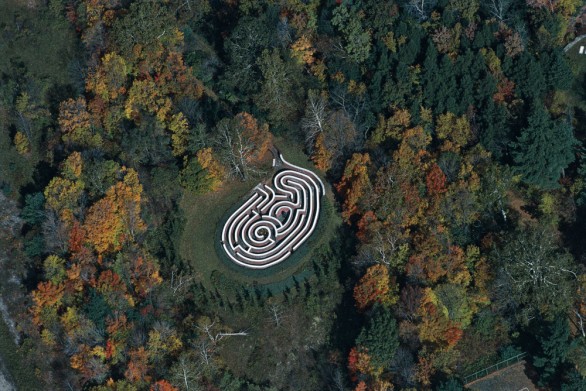 Perhaps there is a parallel between the myth and the facts of our own time which become more explicit with study. For Ayrton, the head and then the whole figure of Icarus reshaped itself, evolving into something as remote as an astronaut. – Madame Pickwick 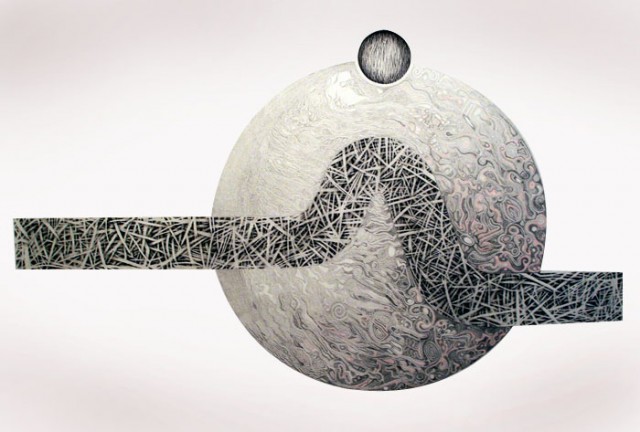 The set design of Tarkovsky’s Solaris features paintings by the Old Masters. The interior of the space station is decorated with full reproductions of the 1565 painting cycle of The Months (The Hunters in the Snow, The Gloomy Day, The Hay Harvest, The Harvesters, and The Return of the Herd), by Pieter Bruegel the Elder, and details of Landscape with the Fall of Icarus.

The space dweller takes a wander through his own mind.

In the literary Solaris, Lem describes human science’s inability to comprehend alien life forms. The cosmonauts believe they are monitoring the planet – but the planet is monitoring them. It creates copies of their loved ones from their memories- but they are ‘faulty’ – imperfect copies with missing memory. Tarkovsky concentrates on the impact outer space exploration has upon the human condition. At one point Snaut says, ‘We don’t need other worlds. We need mirrors’.

Mike Nelson references Lem’s Solaris and Perfect Vacuum (A ‘story’ that only reviews itself as it goes along) in his Coral Reef labyrinth, first built at Matt’s Gallery in 1999 and reconstructed at Tate Britain in 2010. Within it you feel like you’re being watched, monitored and your response measured as you pick your way through the maze of rooms like a lab rat. The last room is a replica of the first which makes you believe you’ve walked in a circle, until you notice the clock in the second room doesn’t have a faulty minute hand, like the clock in the first room – establishing the room is a copy. You think the creator is playing on your senses, but then your paranoia short circuits in a sinister office as you spy upon yourself poking around the maze (your own mind construct) on a delayed CCTV.

An earlier Nelson work, called Extinction Beckons sums up the current climate where technology, innovation and creativity are going into hyperdrive to wrestle with the future. The apocalypse is now, tomorrow and next year too.