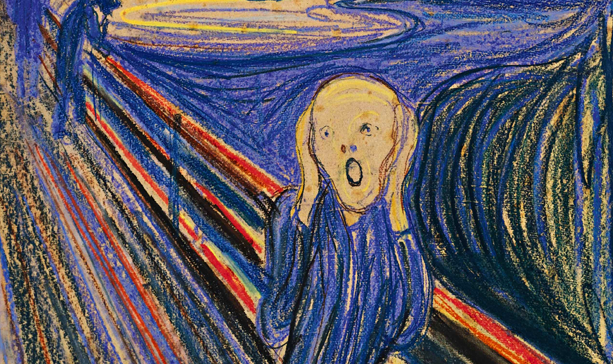 I ventured up to Sotheby’s, New Bond Street, to see a version of The Scream by Edvard Munch (1863-1944). The version consigned to the saleroom and auction next month in New York is a pastel drawing by the artist. The image of The Scream is reckoned to be only second to that of the Mona Lisa in terms of art awareness in the general public conscience, and is regarded as the archetypal image of angst and anxiety of modern man.

The Scream is a series of four artworks created between 1893 and 1910. The version for sale is owned by Norwegian businessman Petter Olsen and was bought direct from the artist by his father. Munch described the inspiration for the image thus:

I was walking along a path with two friends – the sun was setting – suddenly the sky turned blood red – I paused, feeling exhausted, and leaned on the fence – there was blood and tongues of fire above the blue-black fjord and the city – my friends walked on, and I stood there trembling with anxiety – and I sensed an infinite scream passing through nature.

This is referenced in the poem written by Munch on the frame of the piece for sale at Sotheby’s, which says ‘the scream’ actually comes from Nature and not the figure in the artwork. This is certainly echoed in the Expressionist lines and colours used by Munch in each of the finished artworks. 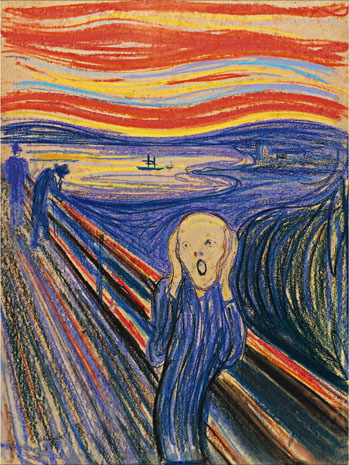 Interestingly at the time the image was created Munch’s sister was committed to a mental asylum and he himself feared he would go mad. Munch lived near the asylum and a local abattoir and could hear the screams of animals and humans from both these places.

I was amazed at the high levels of security employed by Sotheby’s to safeguard the treasure. It should come as no surprise really when sales estimates are as high as £50 million. You have to pass through not one but two airport style security scans and place all meatal objects such as keys, phones, wallets etc. into a tray. Your body is then scanned with one of those wand thingumajiggies before you are corralled into a queue and made to wait (for as long as twenty minutes, states the notice), before you are allowed into a darkened room to view the picture from a distance, behind a barrier. It is though, a particularly beautiful drawing/preparatory sketch, and the colours really sing in the darkened room. 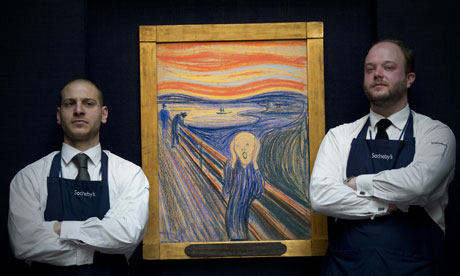 The mind boggles as to what final price it might fetch at auction when the gavel comes down next month in New York on May 2nd. Sotheby’s reckon that the £50 million estimate is the highest that they have ever put on a piece of art for sale. It was a privilege to be able to view it before it disappears off to New York, and then from public view doubtless to some anonymous private collection.

Make a trip to Sotheby’s if you can before the work is sent to New York on Saturday, as there are also some other important pieces on view by the greats of 20th century art, such as Warhol, Bacon, Picasso, Dali, Magritte, Rodin and Matisse.