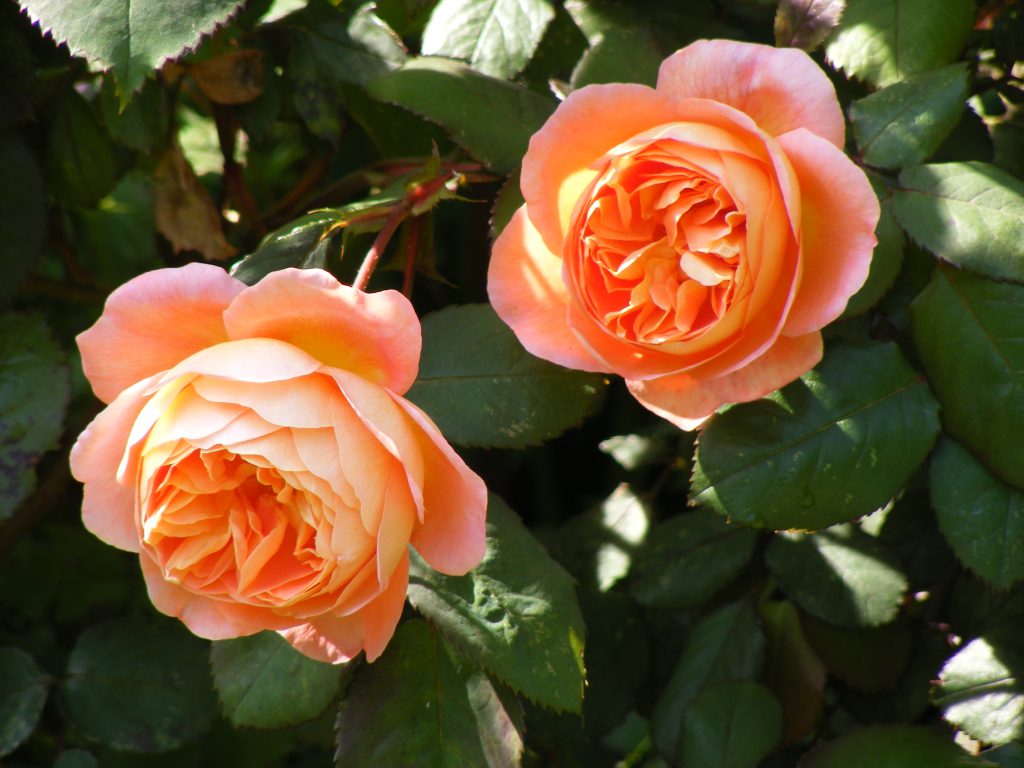 Where the month of May was perfumed with hawthorn and cow parsley, so I associate June with the smells of rowan, elder, privet and pyracantha blossom. In the garden, the honeysuckles have been in bloom for the last two weeks, and on a hot humid evening the perfume is heady – almost overpowering. In contrast my rose ‘Lady Emma Hamilton’ smells at its best early in the morning, with a delicious perfume of peach and orange. So I go out for a whiff first thing before I go off to work. 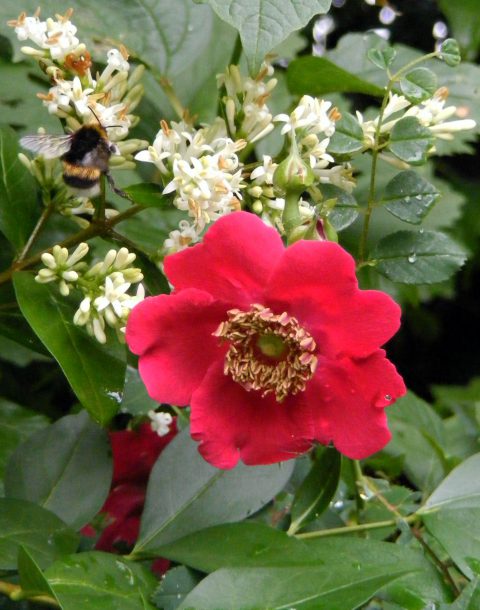 A very different type of rose is this one – Rosa moyesii ‘geranium’. This is an old species rose with ‘simple’ petals – a single layer of a few petals rather than the big, blousy frilly roses of cultivation. Bees have clear access to the centre of the flower for pollen, and large attractive goblet-shaped rosehips are produced in the autumn. This bumblebee was unintentionally snapped while I was taking the photograph. 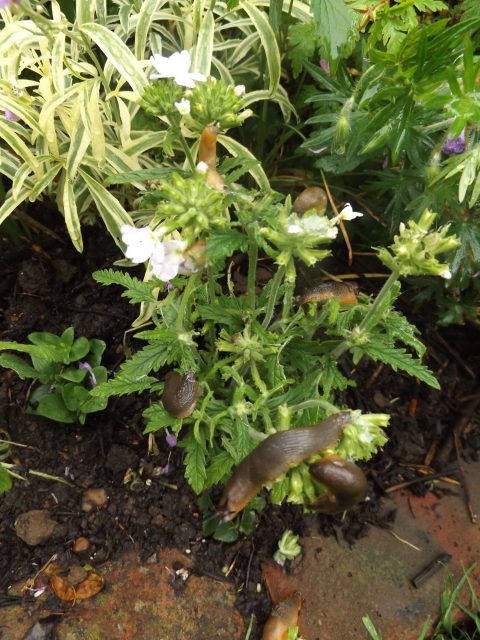 What a washout June has been! The hedgehogs have legged it for pastures new and I’m inundated with slugs.

If ever I needed proof that bedding plants are a waste of time it was during the recent spell of wet weather, when the slugs rushed out from their hiding places like eager shoppers at the Boxing Day sales in search of a bargain. My tray of Verbena x.hybrida, purchased on a whim to fill a gap in the border soon became festooned with slugs, and were left in a very sorry state by the next morning. Verbena bonariensis, (a species plant) on the other hand, is of no interest to them.

I must confess to the ancient and hush-hush sport of slug-tossing. But who hasn’t gingerly picked a slug or snail off a prized plant with a trowel, only to gleefully launch it into space over the next-door neighbour’s fence? 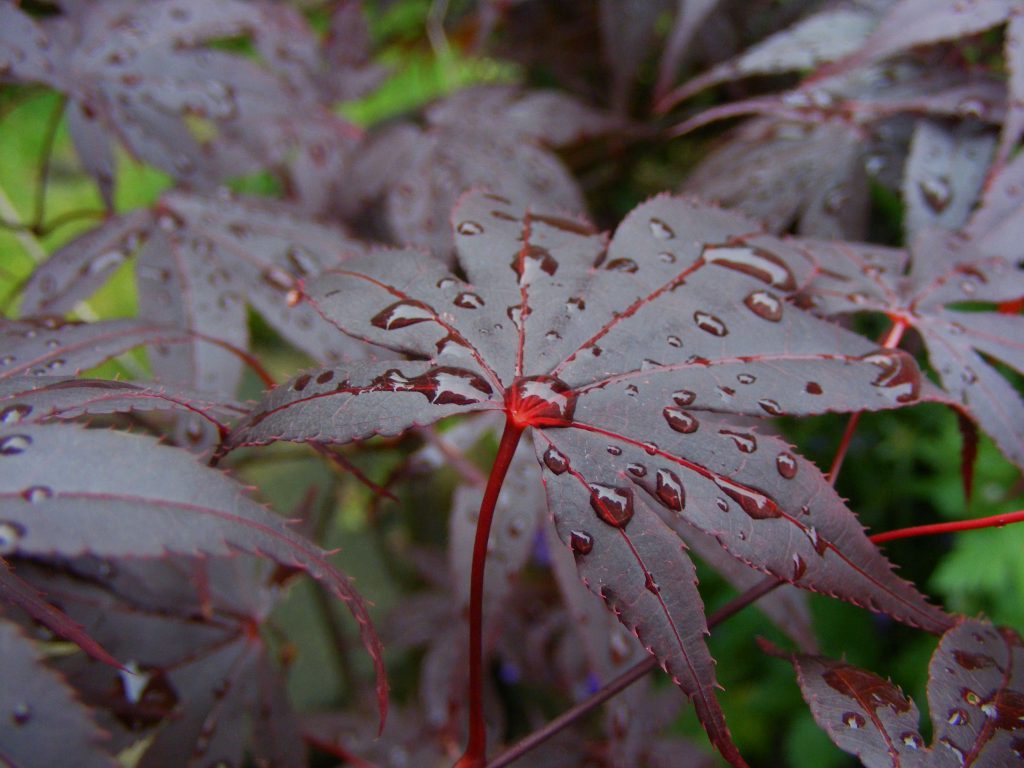 Not named Acer ‘Bloodgood’ for nothing. 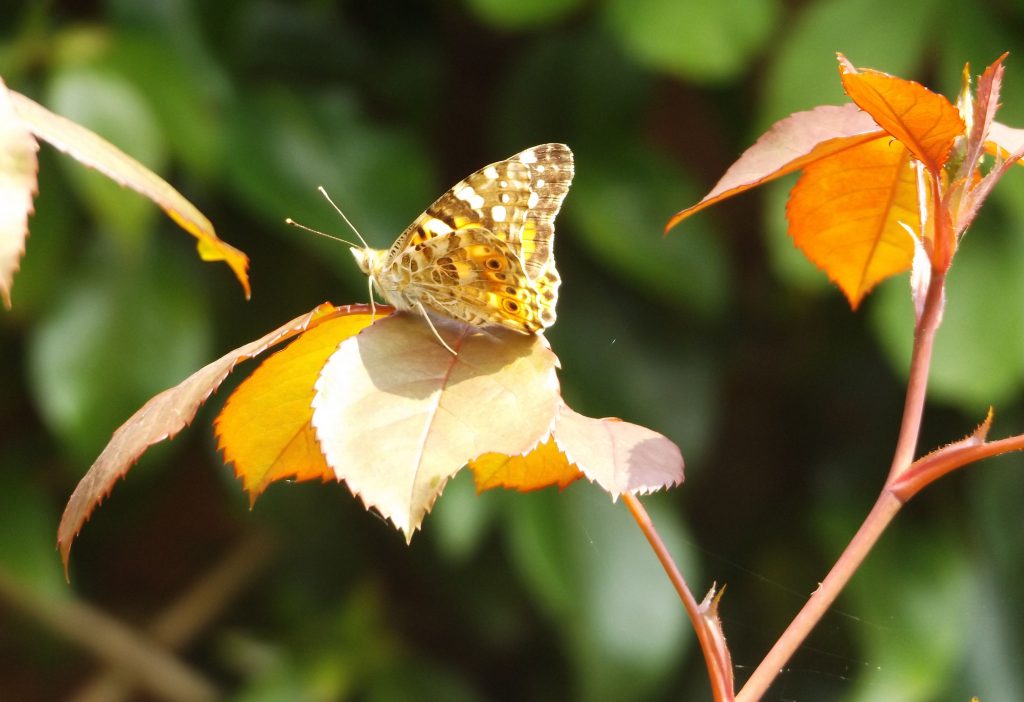 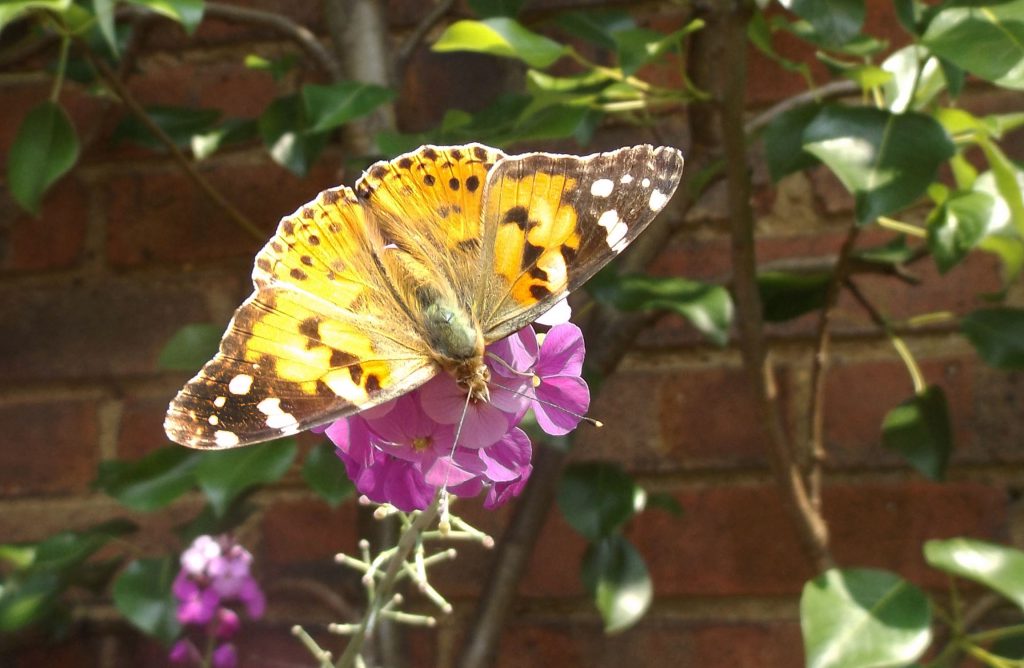 This large butterfly appeared in our garden last week and hung around all day on the perennial wallflower, resting. Painted Ladies migrate every year to the UK and Europe from North Africa, the Middle East and Asia. In good years they can migrate en masse; 2009 was a particularly good one. I remember being called excitedly round to a neighbour’s garden one afternoon to see what must have been 500+ butterflies smothering a big white buddleia bush. They’d been there for a few days and were gradually dispersing; Steve said there must have been at least twice that number when they’d first landed (and he’s not inclined to exaggerate). Never seen this phenomenon since, but similar sightings were recorded elsewhere, as shown in the following picture by Ian Whitcomb of Butterfly Conservation. 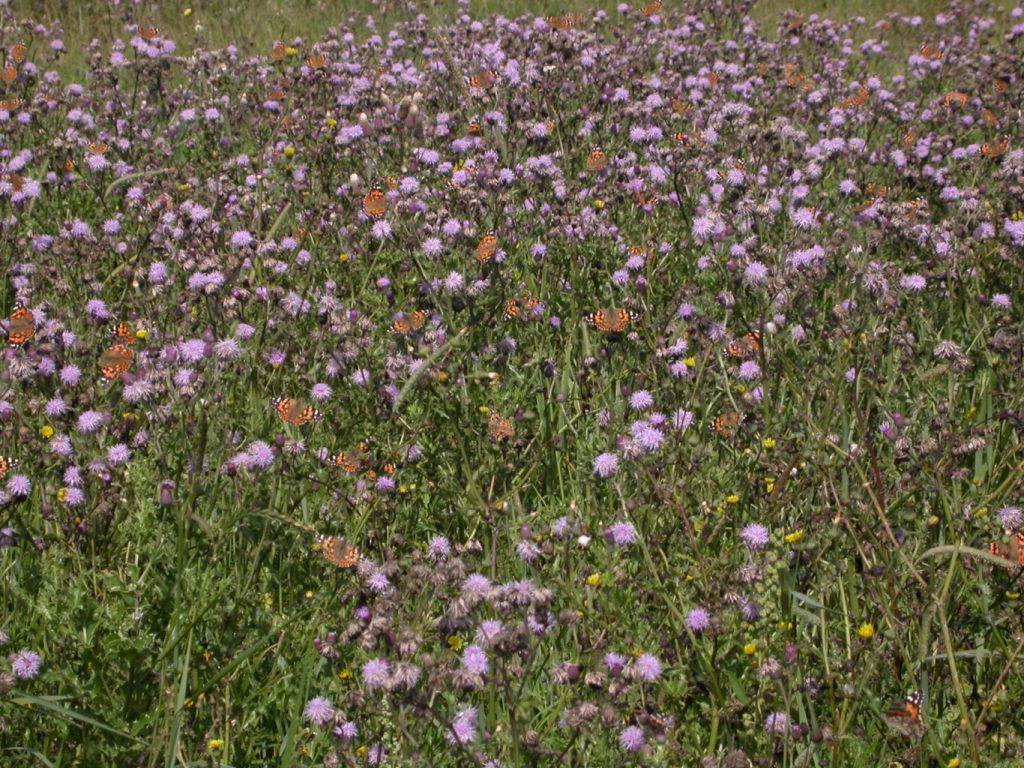 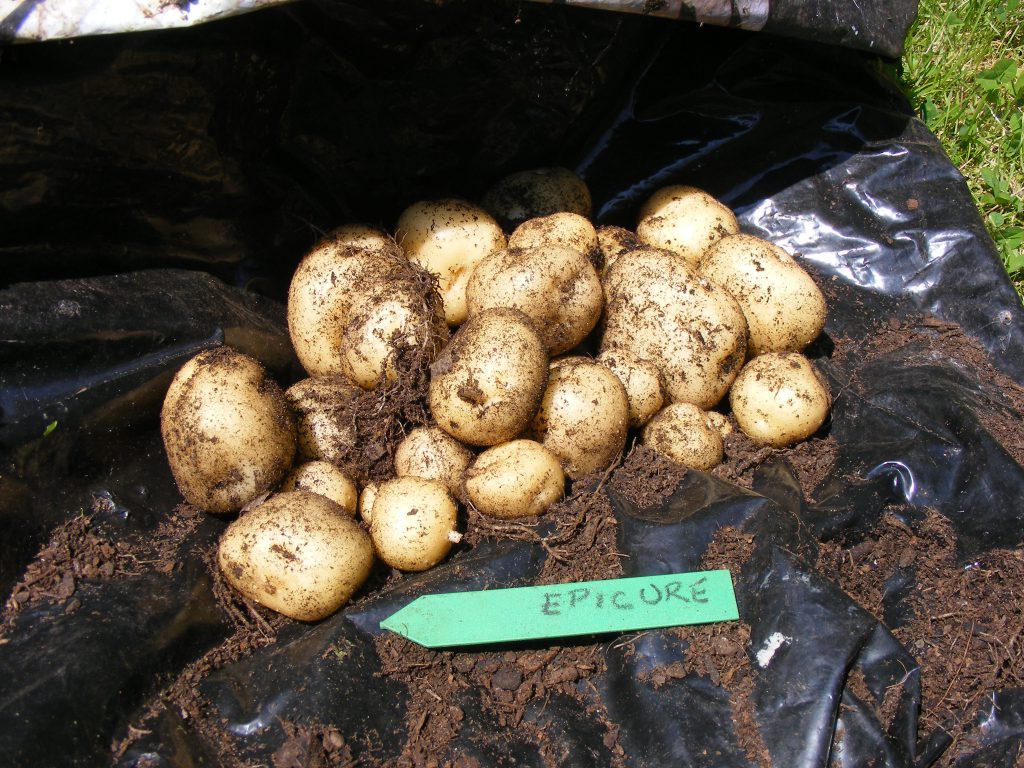 I harvested my first ever sack of potatoes last week. 3 Epicure seed potatoes produced about 2.5lb of potatoes in 12 weeks, grown in a plastic compost sack. I probably could have produced more if I’d fed them, but they were just a bit of fun really and I left them to their own devices. They were very tasty spuds, and from dirt to plate in 3 hours.

Later, a bag of Jazzy potatoes realized a similar harvest of very small potatoes about the size of haricot beans. Lovely eaten with skins on, shoveled en masse into the mouth with a runcible spoon. 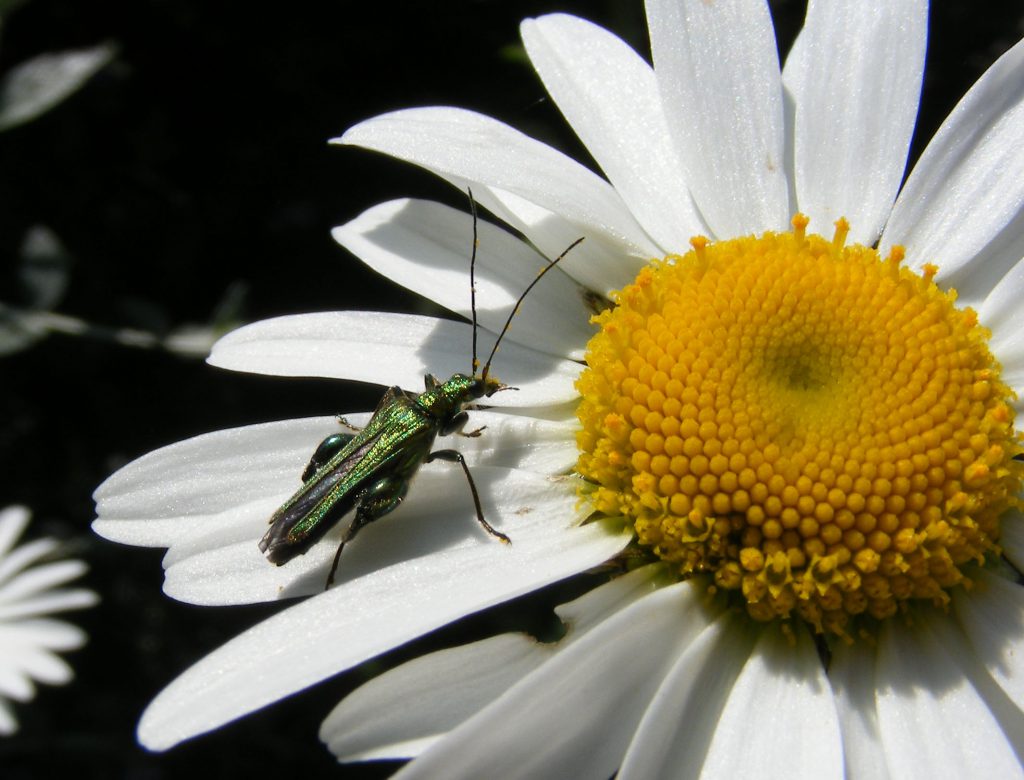 A very pretty iridescent green flower beetle on an oxeye daisy. Oedemera nobilis, or Thick-Legged Flower Beetle, for those of you who want to know. 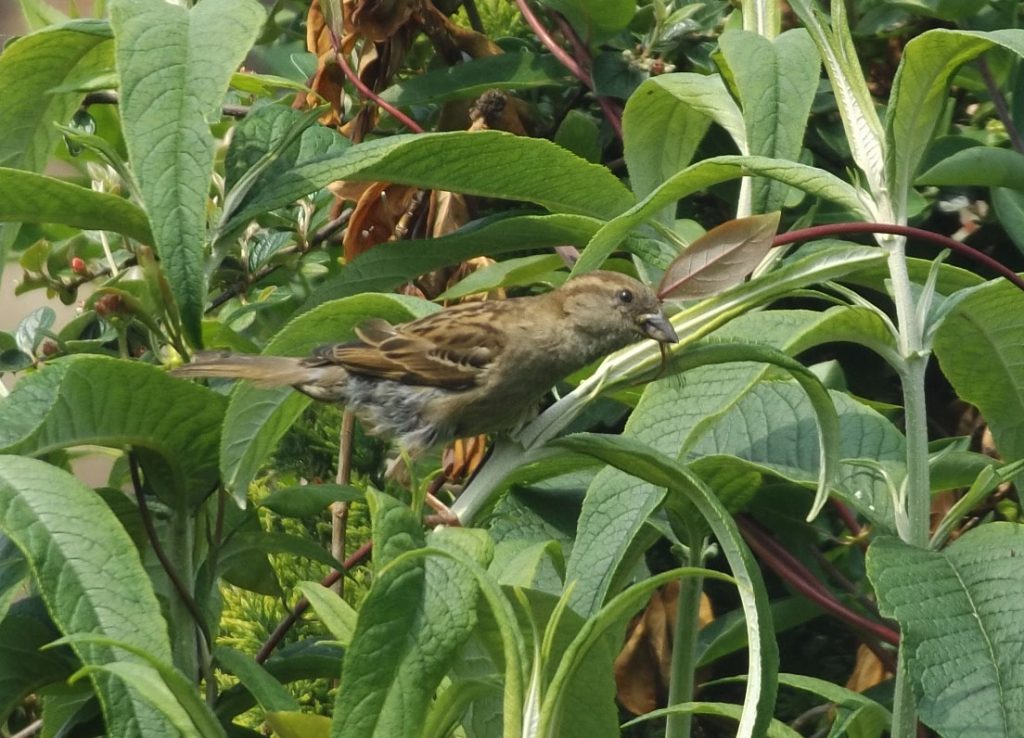 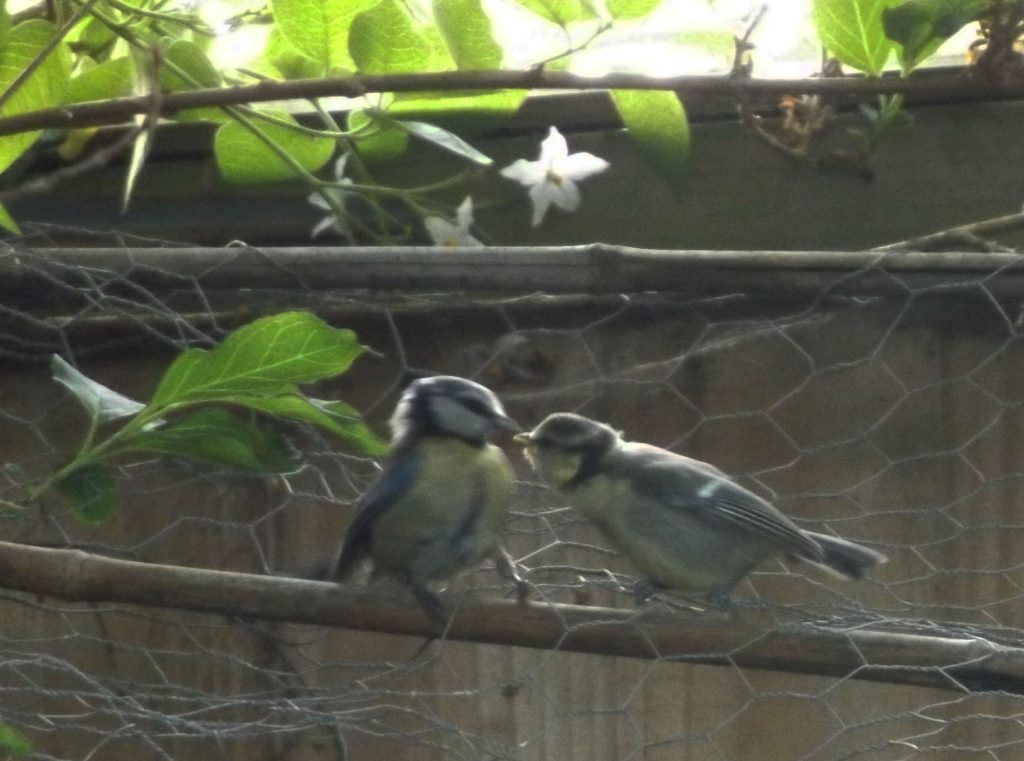 The garden has been very busy this month, with little birds flitting about in search of live prey for their chicks. Blue tits, great tits and house sparrows in particular have been performing aerial acrobatics over plants, plucking caterpillars, grubs and flies from the vertical stems of iris, rose and buddleia. Our Acer negundo has become Bird Central for a family (or two) of Tits, recently I counted 8 young birds perching closely together within the cover of foliage, awaiting their parents’ offerings of food. I managed to capture a fleeting picture of a blue tit parent feeding its chick, and a female house sparrow with a damselfly breakfast on the white buddleia. 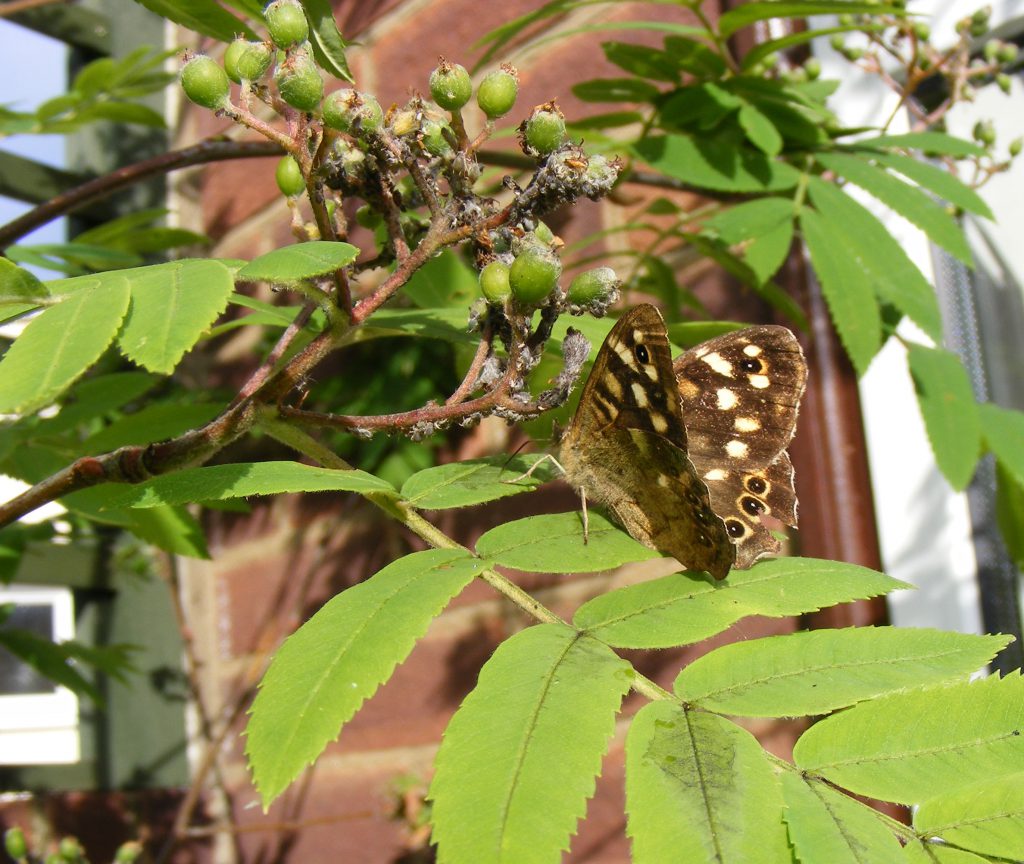 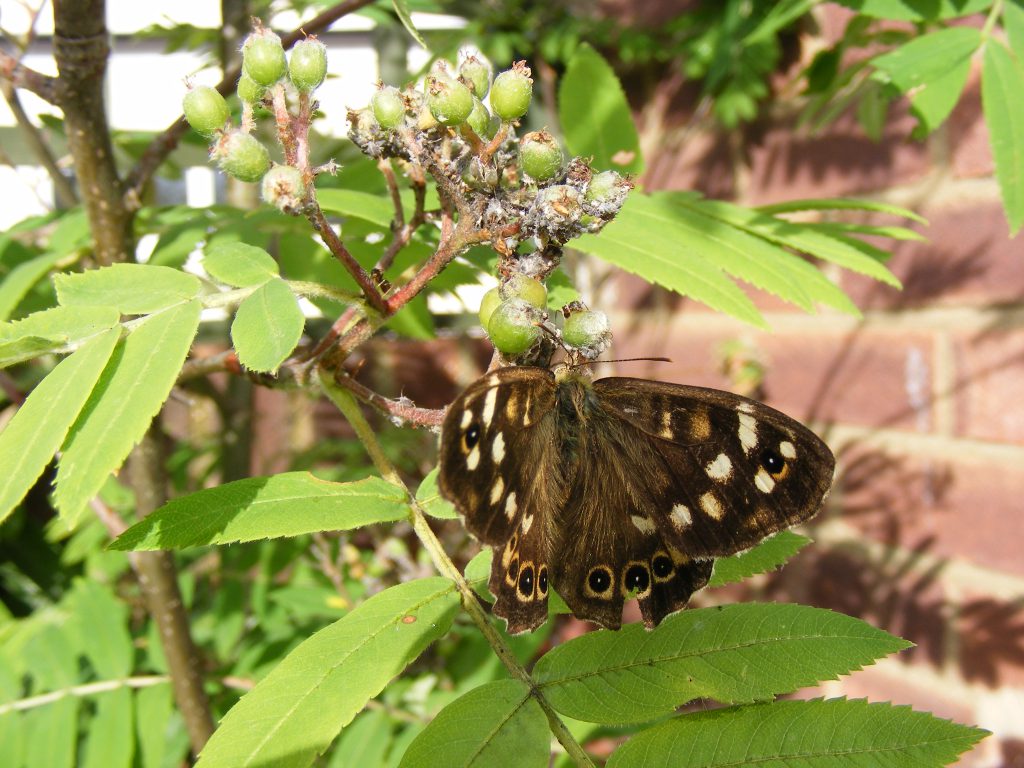 These Speckled Wood butterflies are often seen in our garden basking in the sun on the shaggy conifer. This afternoon I spotted one probing around some unripe rowan berries with its proboscis. Curious to see what it was doing, I looked closer to see the berries were also covered in black aphids. Speckled Woods (I found out later) principally feed on the ‘honeydew’ produced by aphids. They are rarely seen feeding on flowers, except early and late in the year when aphid numbers are low.

Nature is an intricate tapestry and everything has a reason for being within it. This spring I have seen sparrows and tits flitting about the garden picking grubs and caterpillars off plants, and watched Speckled Wood butterflies sipping honeydew from aphids on my Rowan tree. Had I sprayed with an insecticide the birds and butterflies might have gone without a dinner. 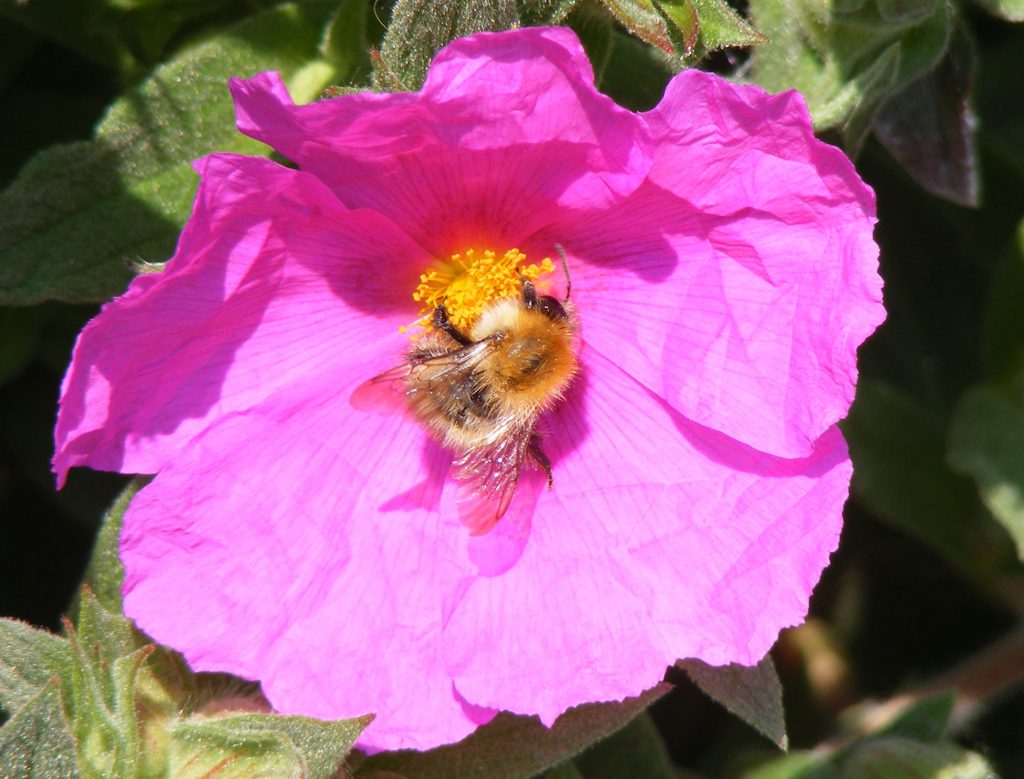 The Cistus is in flower now, with petals as thin as crumpled tissue paper. The blooms live for only one day but are borne in great profusion all summer. Enjoying its nectar is a tree bumblebee, a recent colonizer of the UK first seen in Wiltshire in 2001.

On the subject of bees, what at first glance appeared to be an unremarkable little fly spotted in the back ‘garden’ of the Rowley Gallery revealed itself to be a bee on closer inspection. In order to find out more, it prompted me to purchase a guide-book to all 275 of Britain’s bees. An utterly fascinating book; it narrowed the field down a bit to a group of mining bees, though I can’t say I’m much closer to making a positive identification. As some can only be identified by dissecting their genitalia, I don’t think I’m likely to become a world authority on bees just yet. 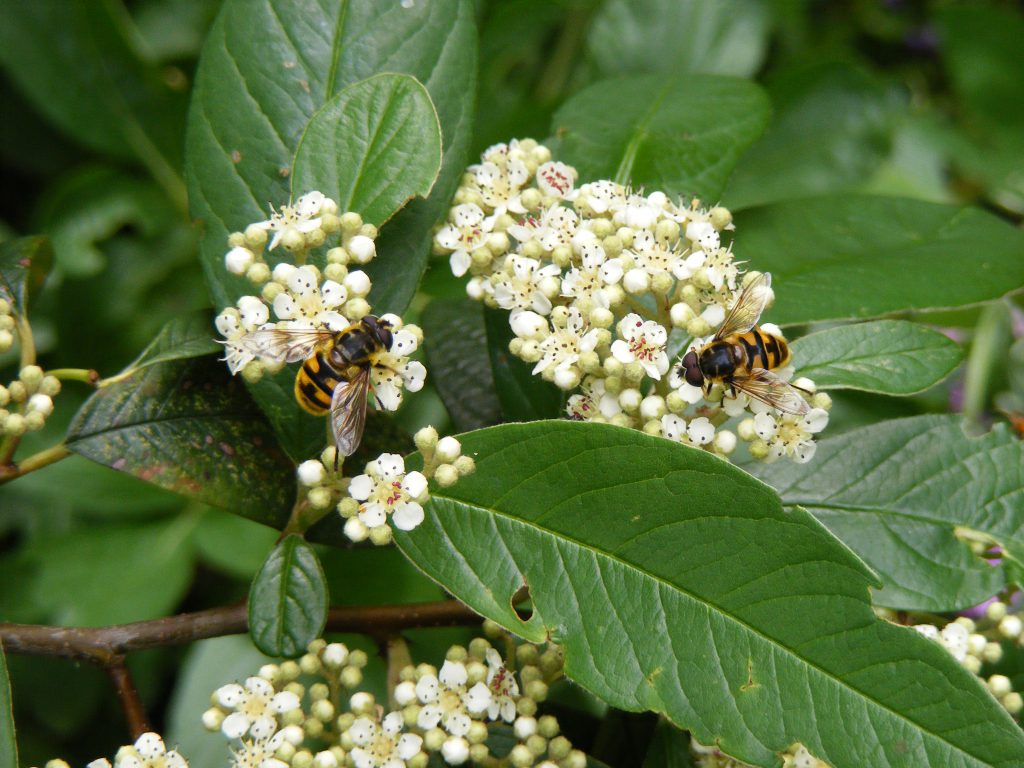 Just to confuse matters further, here are some hoverflies that look like bees. 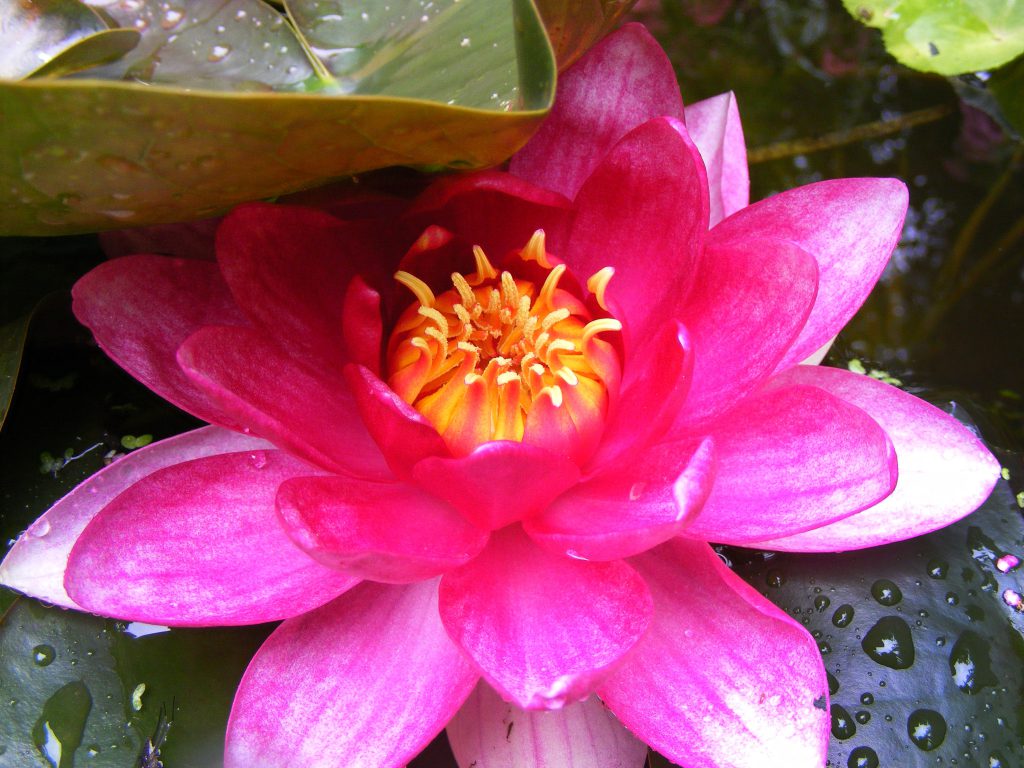 And the water lily has just produced its first flower.

6 thoughts on “A June Garden”