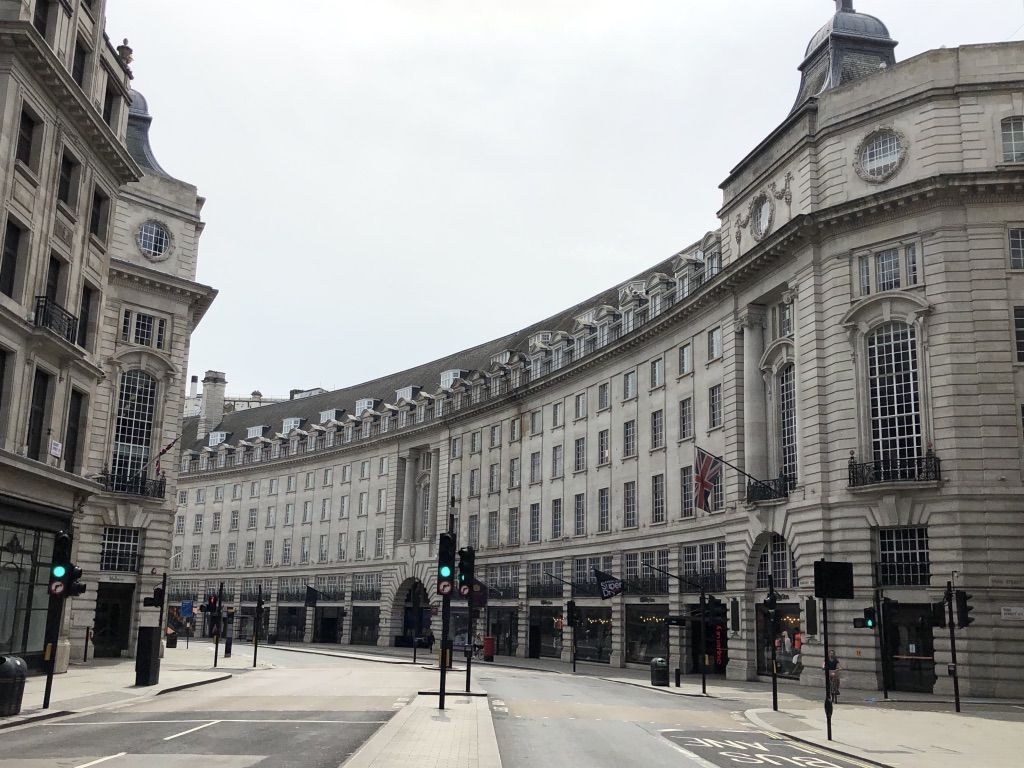 A friend kept phoning us in the mornings of late April and early May. She was, rather against her will, still gallantly fulfilling her duties at an office in Oxford Street. She disliked being there and feared the possible consequences in mid-pandemic. But the reason she kept phoning was to tell of her exuberance in the early mornings at being able to walk the length of Regent Street alone and in the middle of the street. She described the complete peace and quiet in the utterly empty street free of people, free of traffic.

So, as politicians started to talk of the need to be alert rather than locked up, this seemed to be an opportunity. Never again, I would hope, might central London be so deserted. I decided to take an early morning and socially distanced walk through the centre of the city. It would be a wide circuit, starting where I live in Maida Vale, taking in the major London parks and the central streets. It was the Friday of May the 8th, a Bank Holiday that pre-pandemic had been planned to be the day of celebration of the 75th anniversary of VE-Day, the ending of war in Europe. Back in 1945 the centre of the city had been overwhelmed with wildly celebrating people. The trumpeter Humphrey Lyttleton, then a young man, providing an exuberant version of ‘Roll Out The Barrel’ outside the gates of Buckingham Palace. No one would have predicted the quiet, deserted streets that marked the anniversary this year.

I started my pilgrimage by walking down through Paddington, into Hyde Park and then walked along the banks of the Serpentine. A heron was keeping watch from the roof of the boathouse. 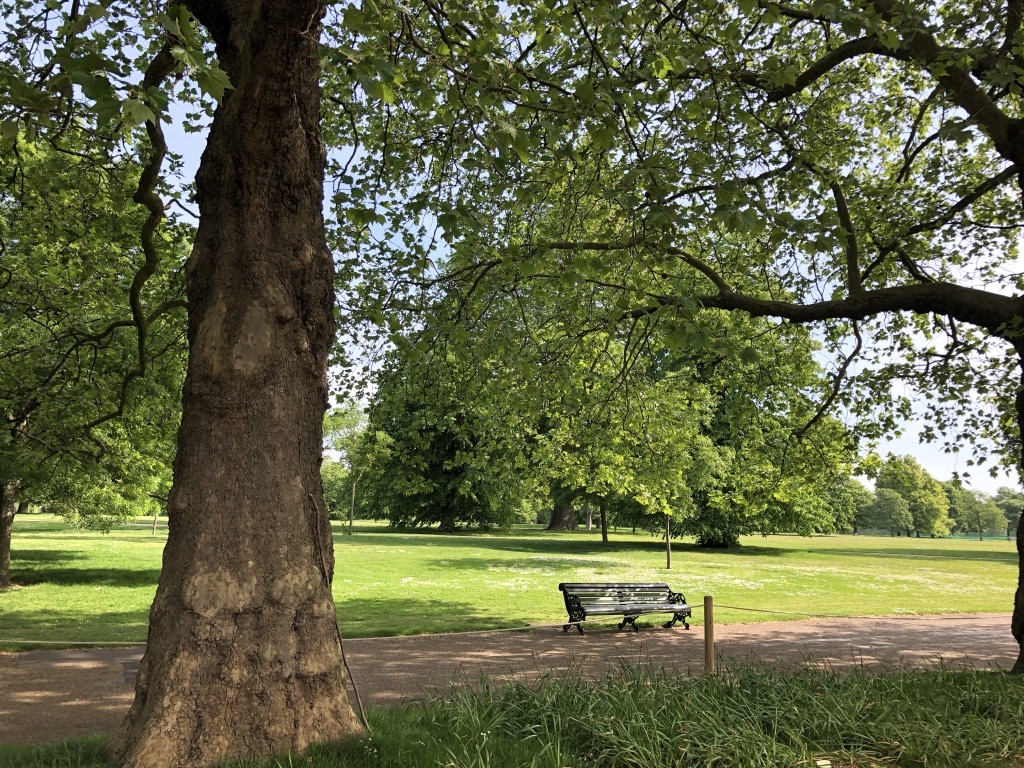 The cycle paths were busy. The park was empty. 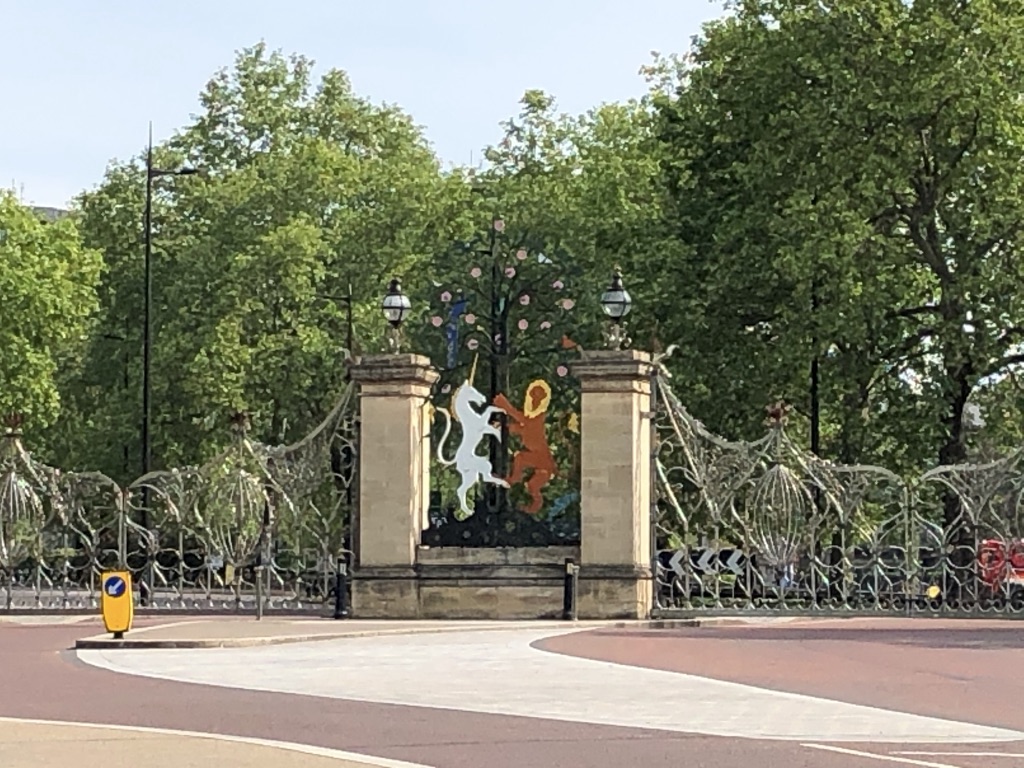 As was the area round the Queen Mother Gates. 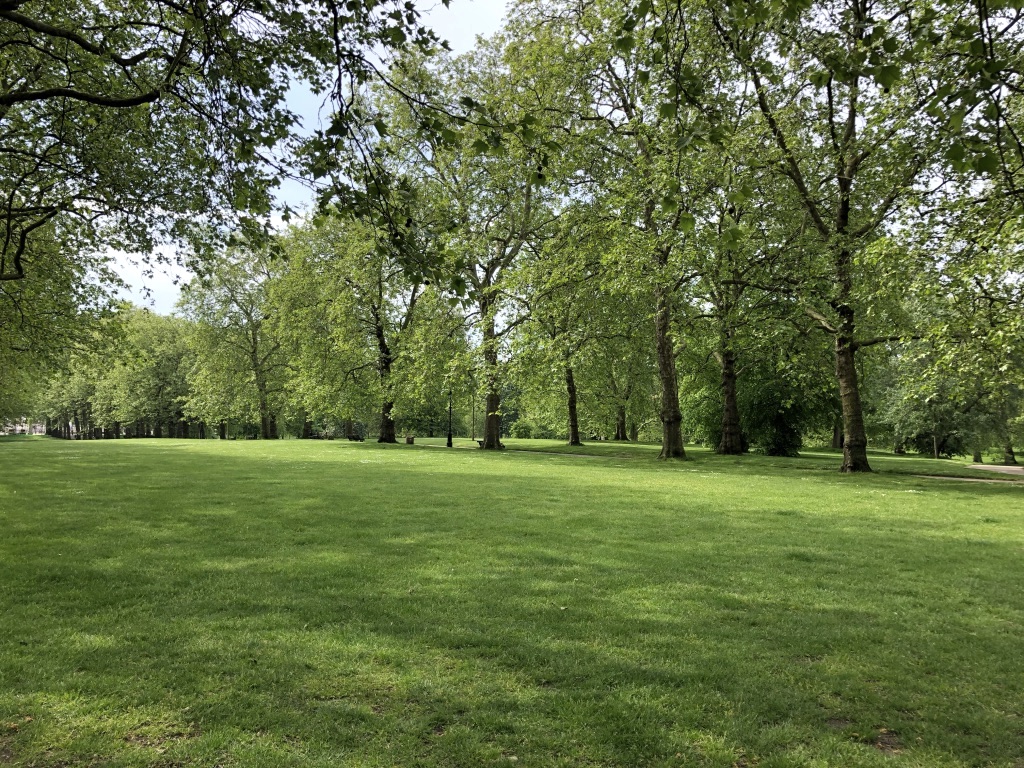 And once across Hyde Park Corner and into Green Park a great silence descended. I saw only four people in the whole park. 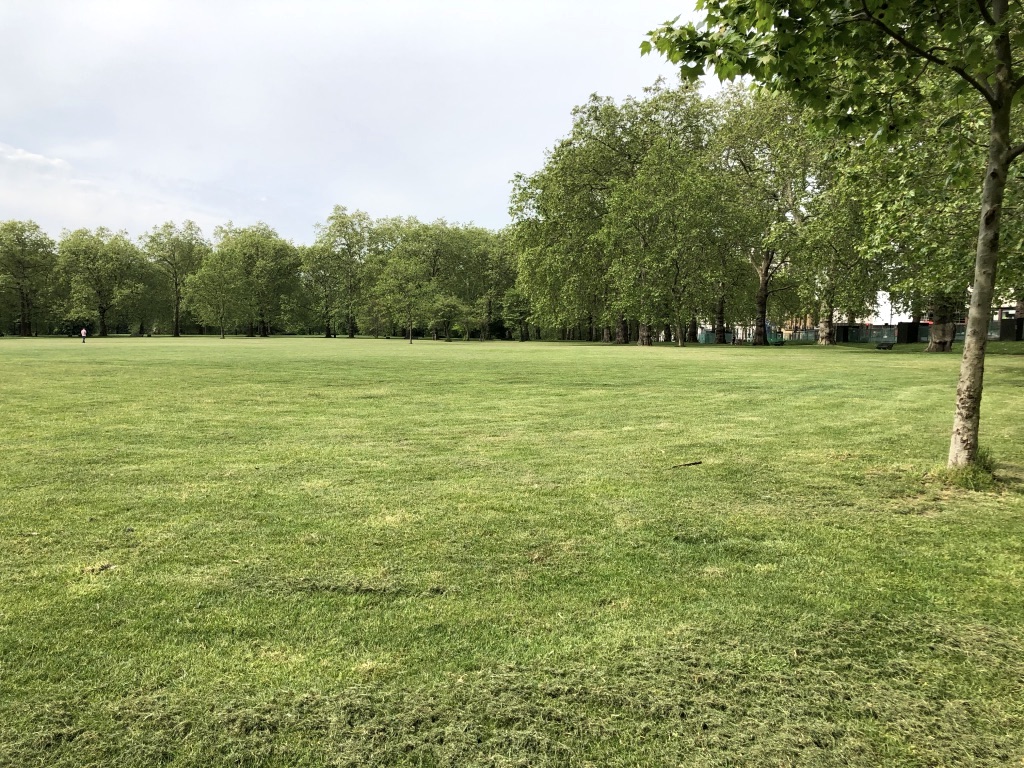 At 10.00 AM the silence was briefly interrupted. The Red Arrows, completing a fly-past over Buckingham Palace, diverted to roar overhead with streams of red, white and blue vapour trail. Too unexpected and too fast for a photograph. It was peaceful again. And the area that normally would be packed with deck-chairs for this perfect late Spring day was deserted. 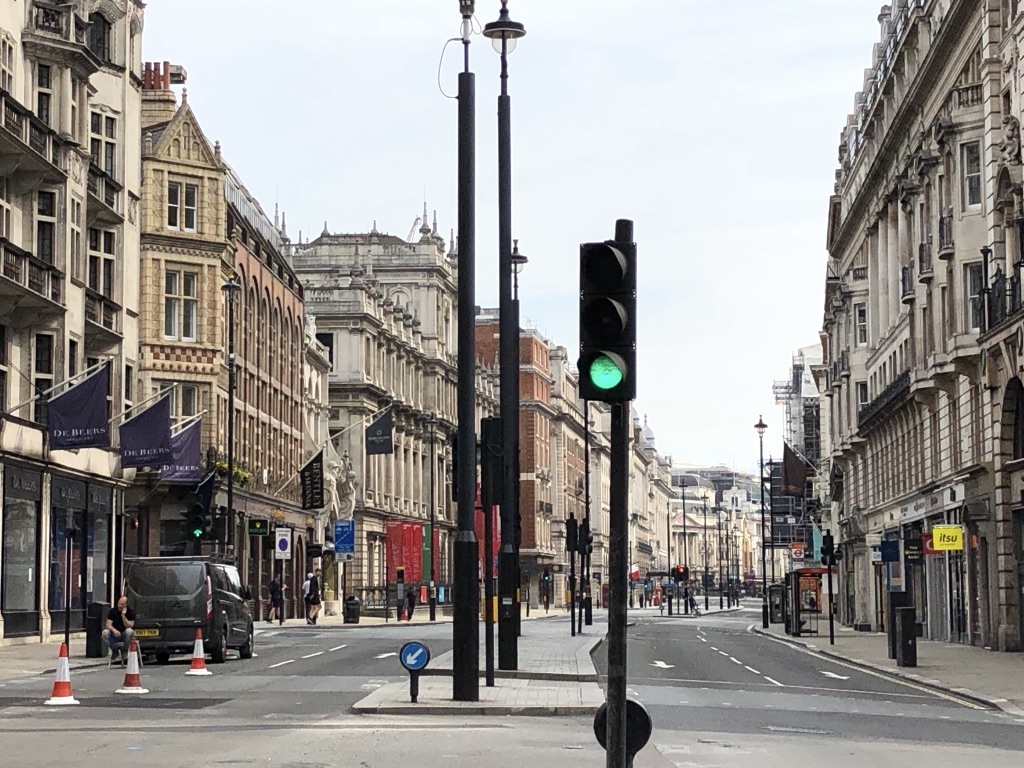 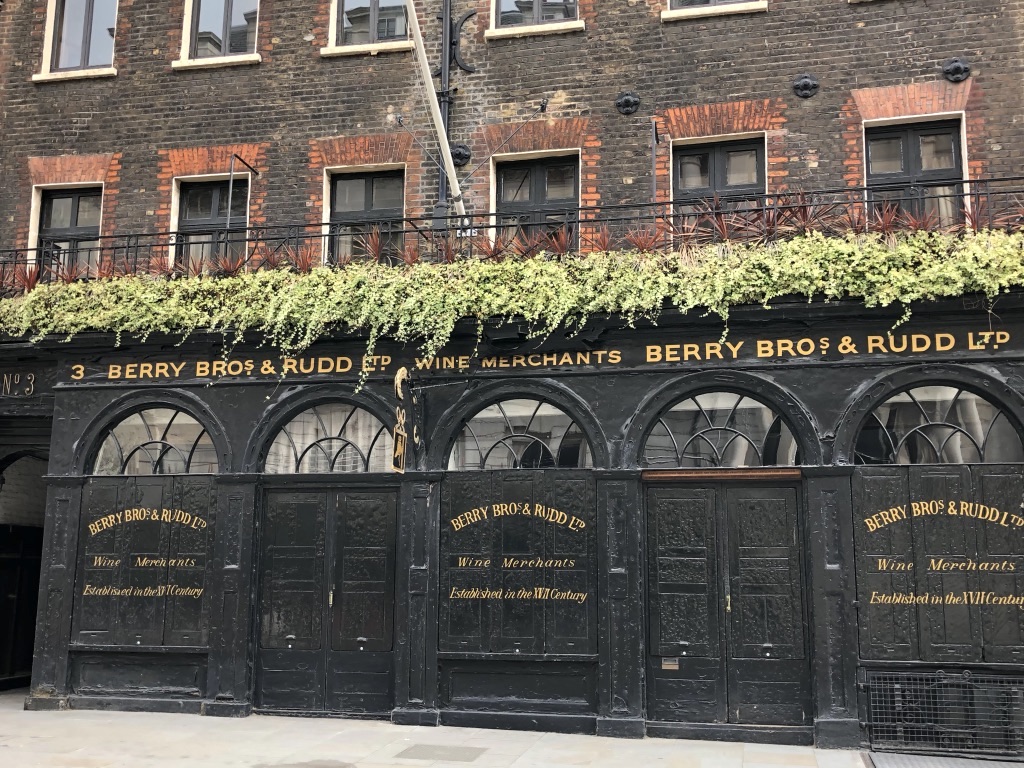 And the chances of a glass of something to celebrate the day were non-existent. 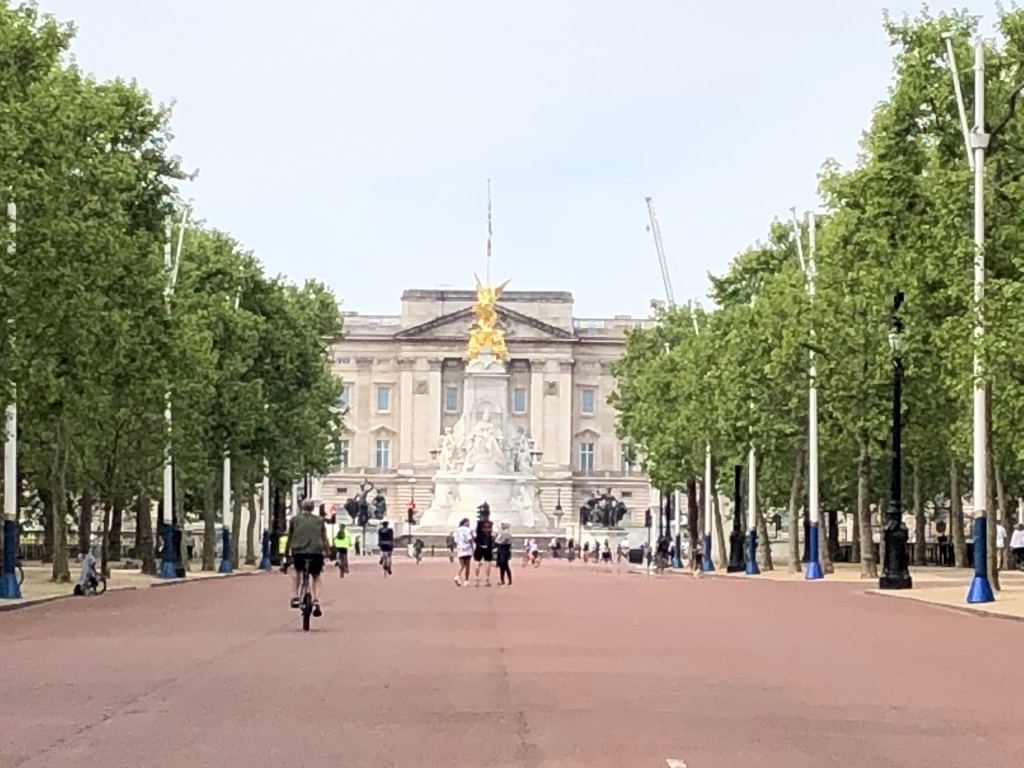 And there were only a very few people on the Mall in front of Buckingham Palace. 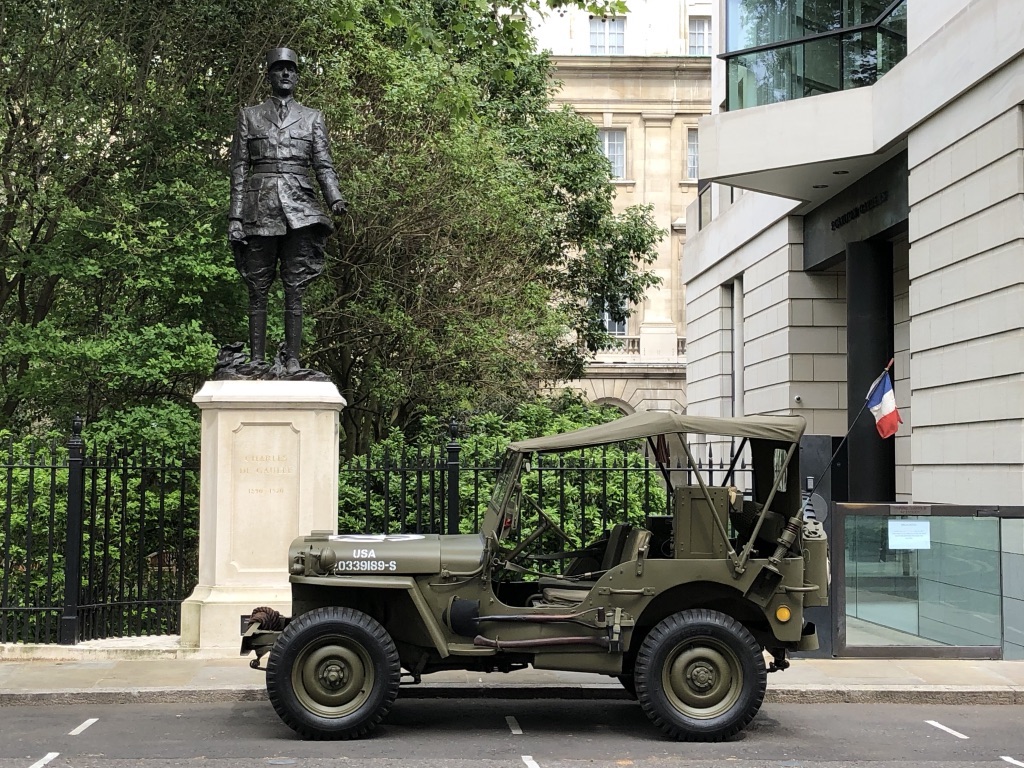 It being VE-Day I thought I’d pop up onto Carlton House Terrace to see how General De Gaulle was celebrating. Strangely he had a US Army jeep in attendance. 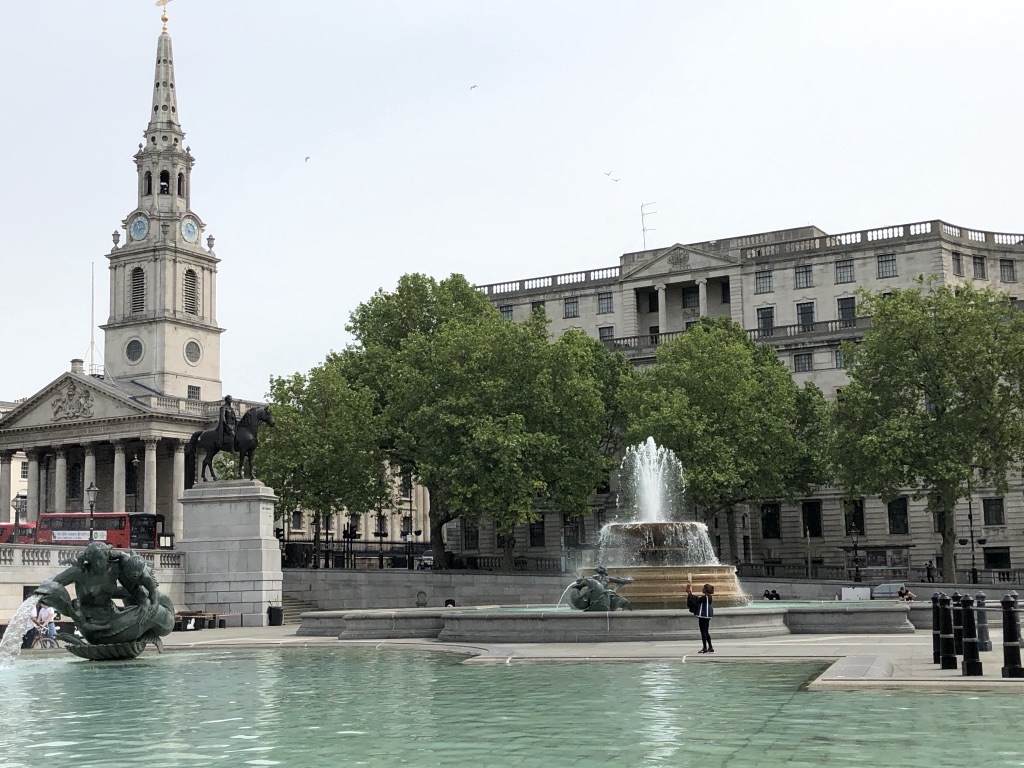 After that it was a short stroll to a virtually empty Trafalgar Square. 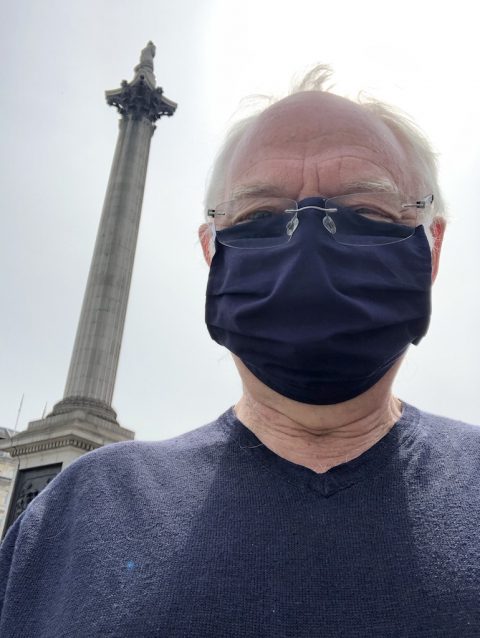 Admiral Nelson and I observed the niceties of social distancing. 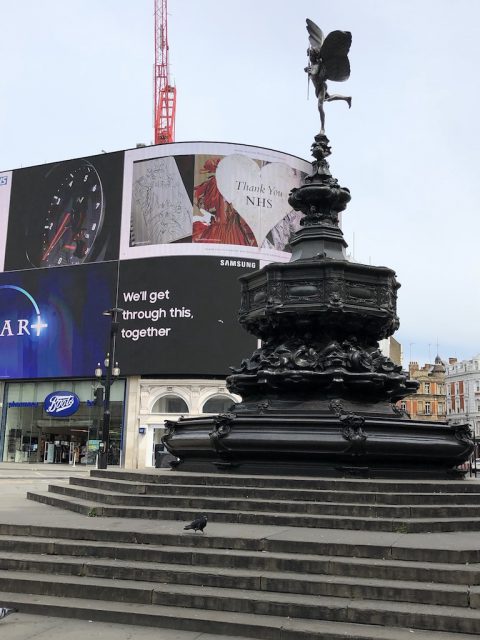 Then it was on up to Piccadilly Circus, a solitary pigeon in attendance.

And then the goal of a completely deserted Regent Street. It looked like the dystopia that science-fiction film-makers dream about. 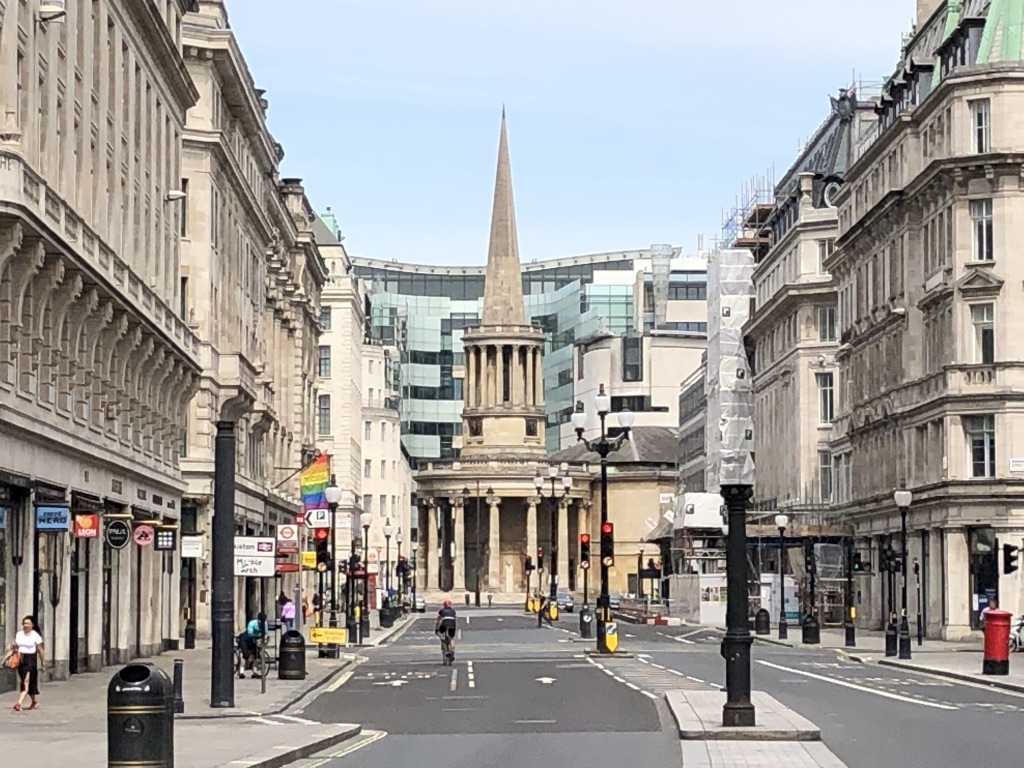 It was lunchtime on a Friday and Oxford Circus was little busier. 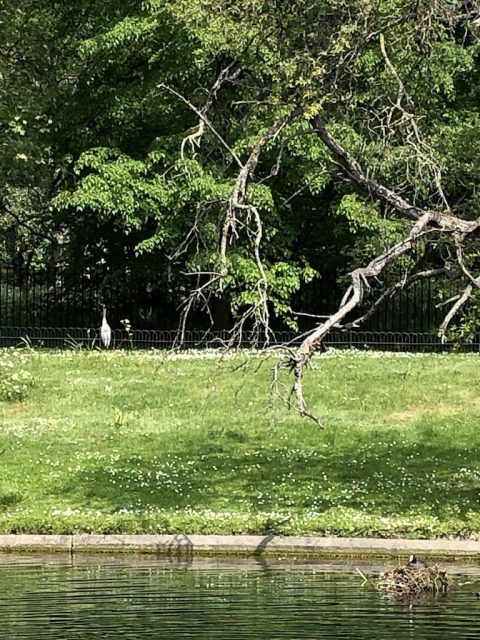 Walking up from there and through Regent’s Park I found another heron, this time looking askance at a nest of coots. It was full circle. The park was thronged with people. But the centre of the city, on a Bank Holiday celebrating one of the most notable events of the past century, had been empty. An extraordinary sight in extraordinary times. The pandemic war was far from over.

2 thoughts on “The Empty Streets”