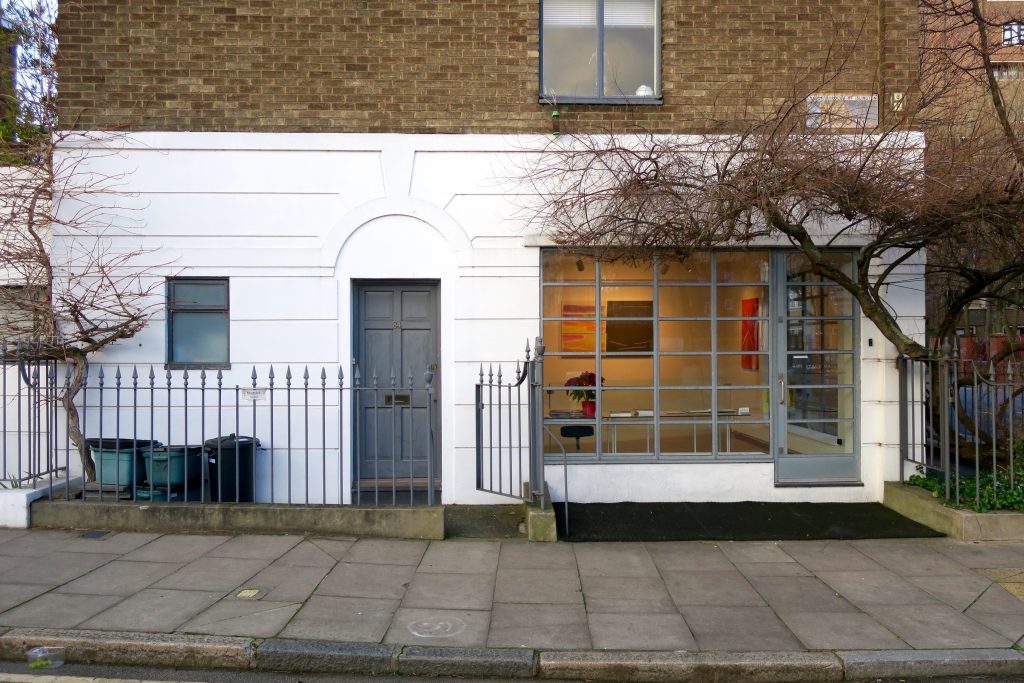 This time last year, as relief from the winter gloom, we went down to Margate to see an exhibition of paintings by Patrick Heron. This year there’s no need to travel quite so far; the Art Space Gallery in Islington is full of winter sunshine until the end of January. I don’t know why I’ve never been before. It’s an intimate series of rooms and alcoves and niches, presently framing some wonderfully joyful bursts of colour by John McLean. It’s a memorial exhibition for a sharp, bright and generous spirit. 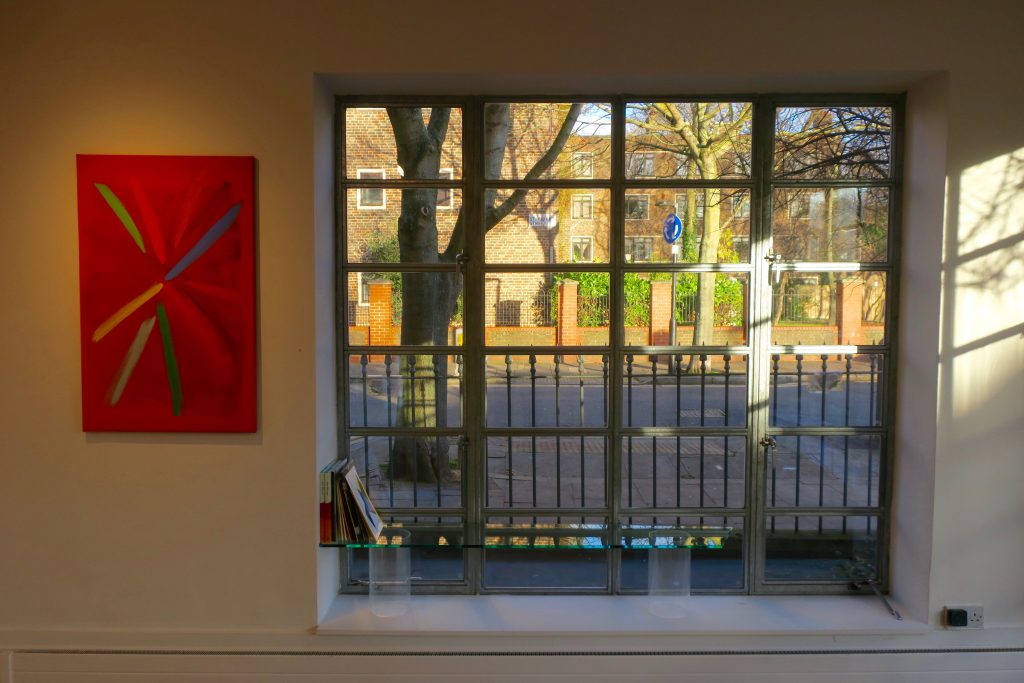 John McLean died last summer at the age of 80. During his final years he struggled with a particularly debilitating form of Parkinson’s Disease, but with stoicism and curiosity he used it to explore new ways of painting – “Parkinson’s has exposed me to techniques that I might have otherwise missed”. 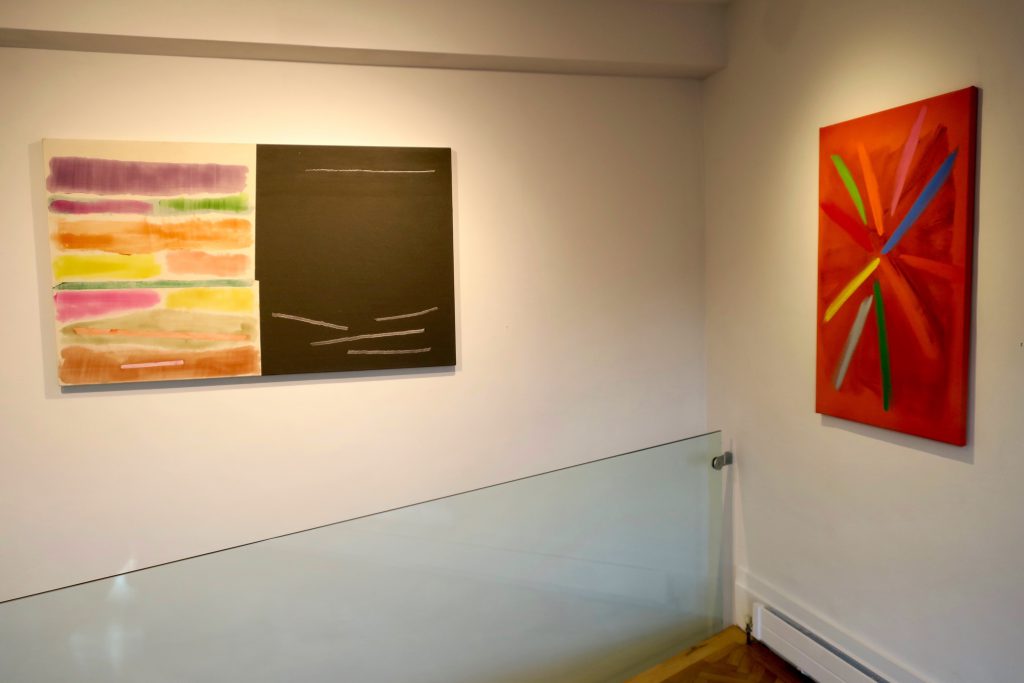 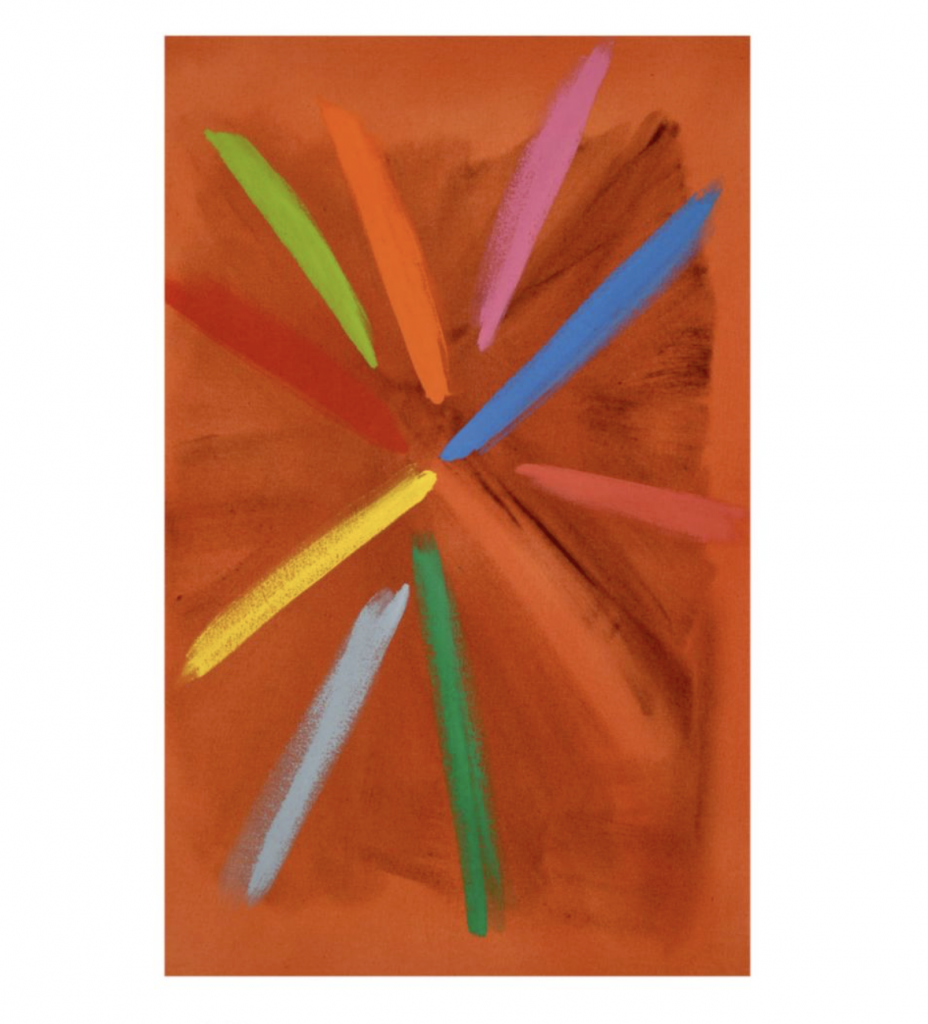 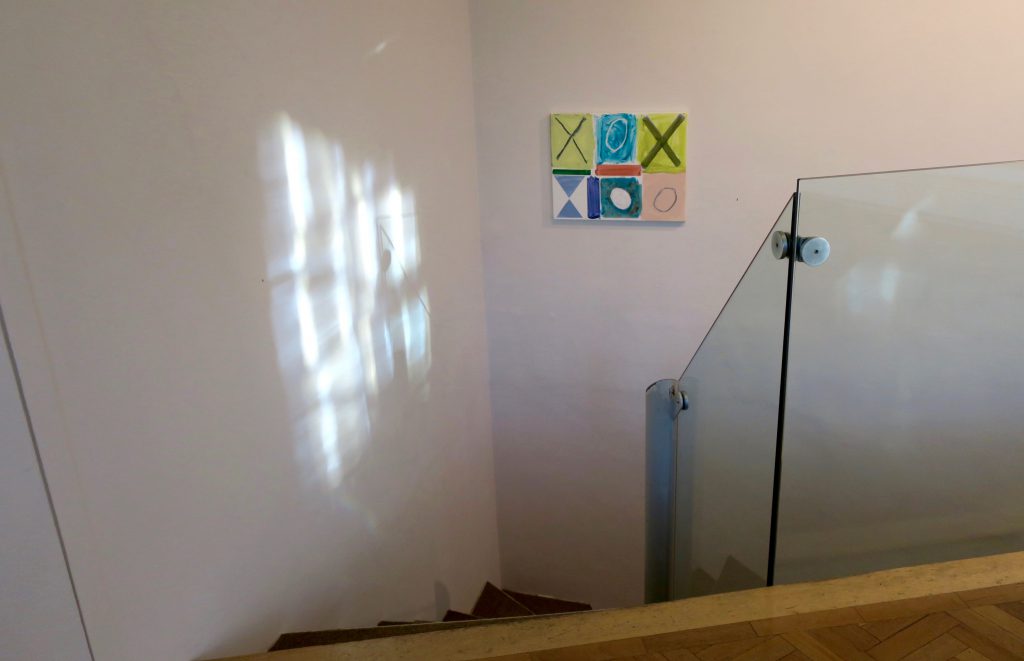 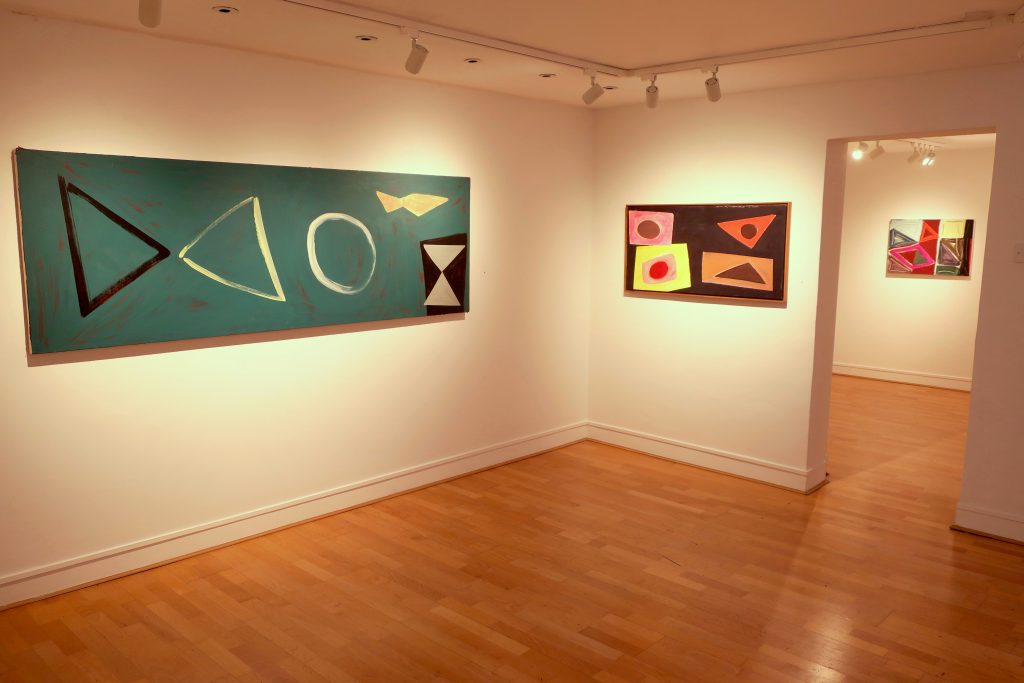 Downstairs I’m greeted by a fantastic array of bright moments; dancing compositions jumping off the walls to surprise me at every turn. I’m slightly overwhelmed. I’m the only visitor and it’s as if they’re performing just for me. It’s a privilege to be in their company and share their delight and joi de vivre . 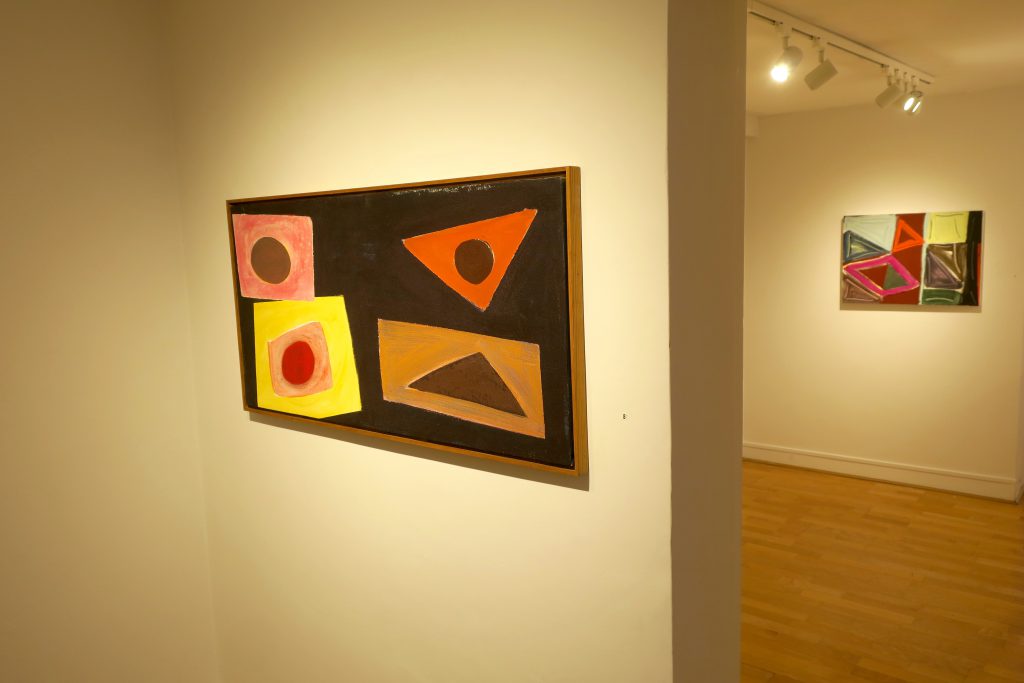 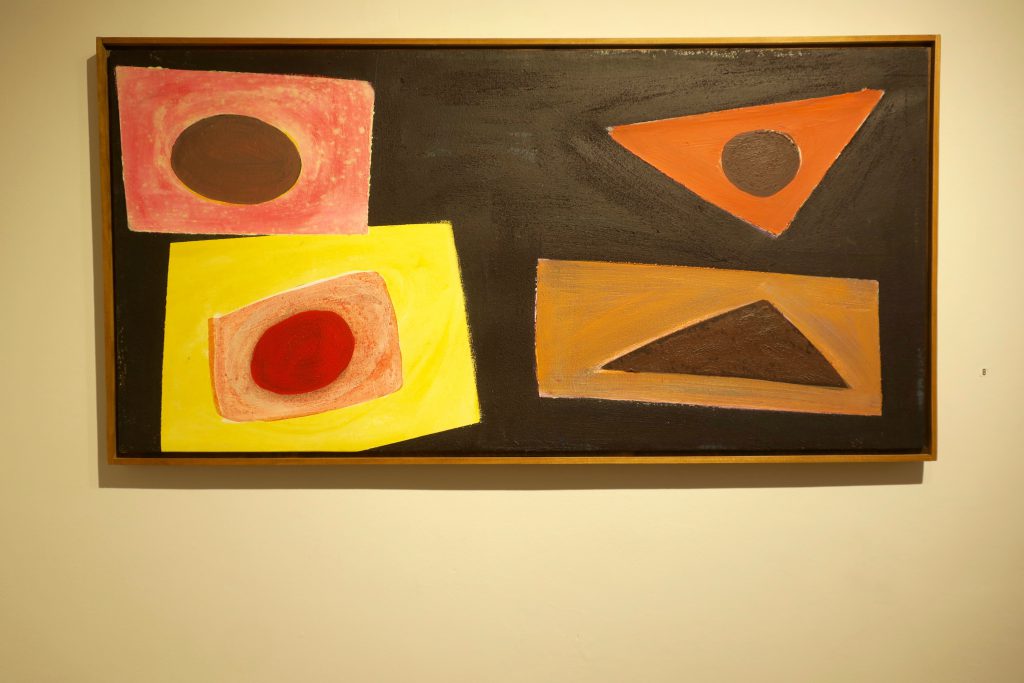 They’re made from an assortment of simple painted shapes, motifs and devices playfully balanced and pivoted in a colourful call and response, and all magically animated into a chorus of visual birdsong echoing and reflecting around the gallery. These are improvised jazz solos to turn your head around. 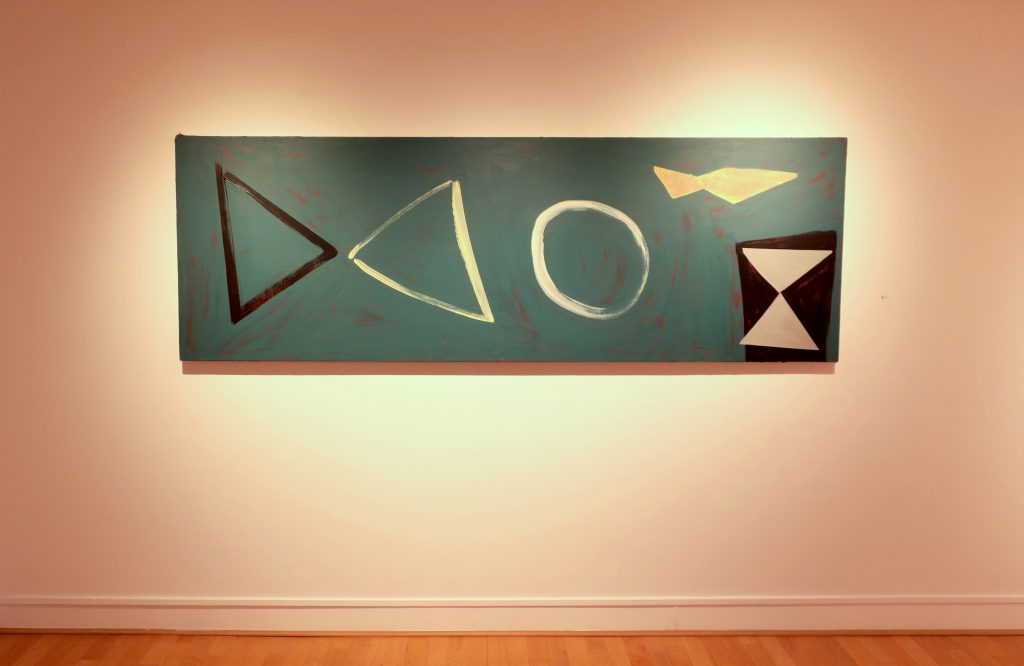 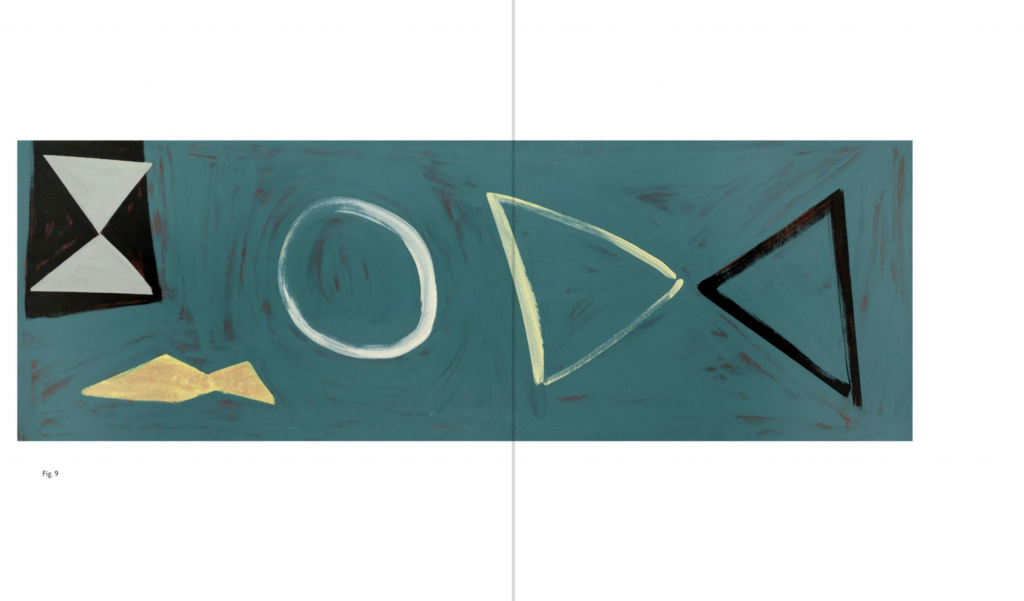 This painting refuses to be pinned down, it has no name, no date, and in the catalogue it appears upside down. I think maybe I prefer it that way. Which Way Up was a frequent conundrum and also the title of an engaging documentary film about the artist made in 2017 by Chris Morphet. 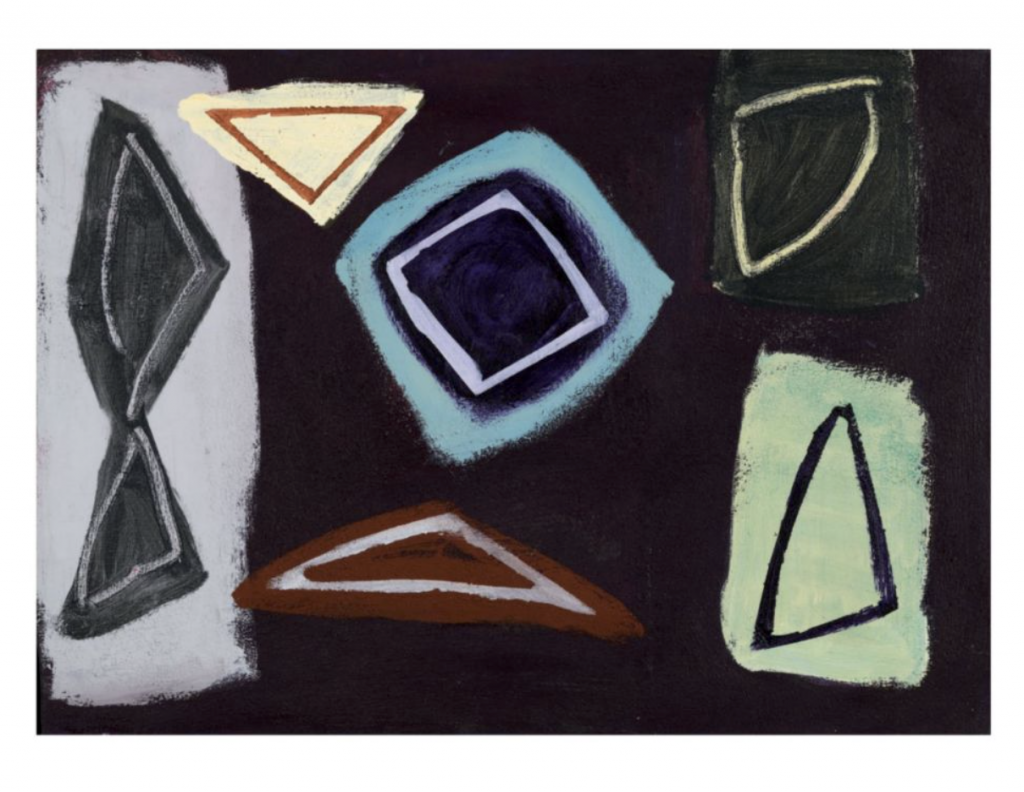 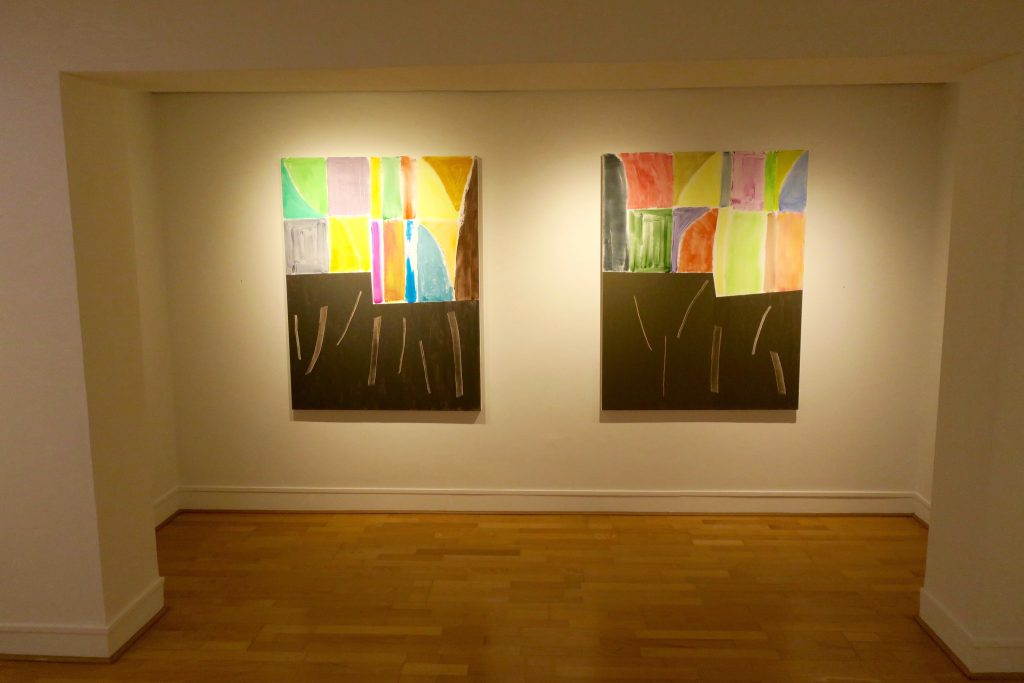 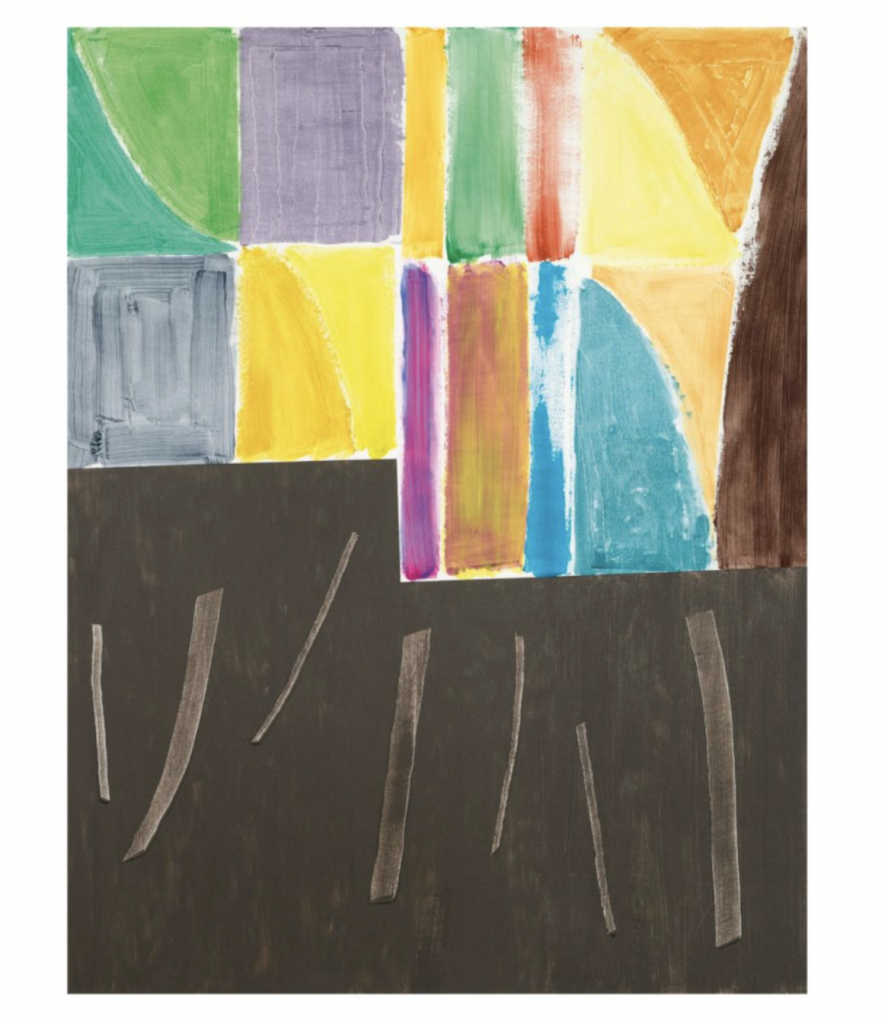 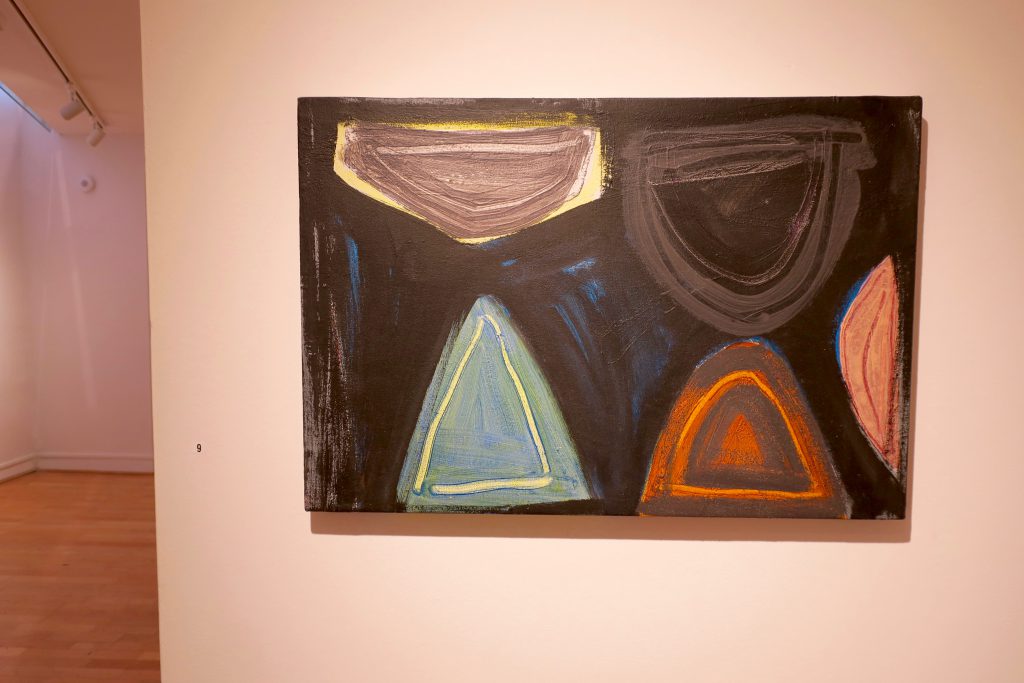 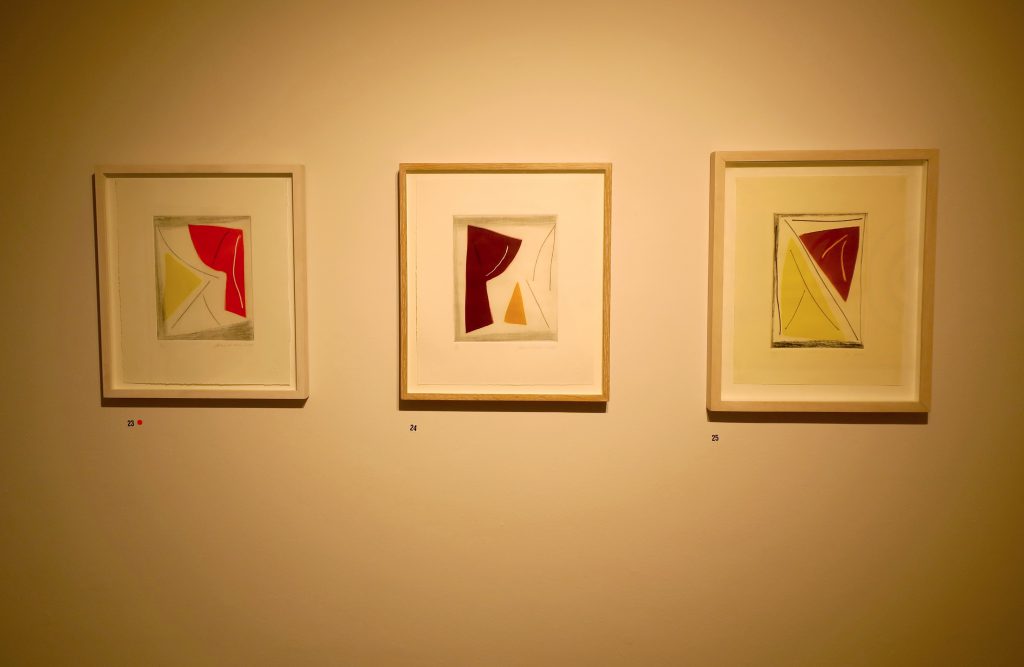 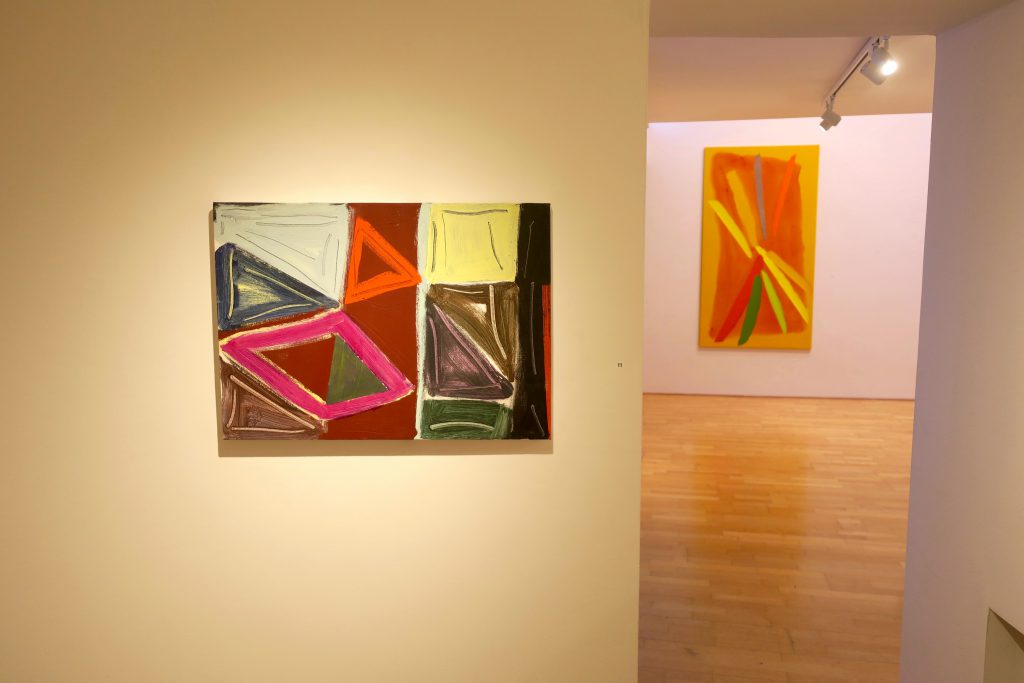 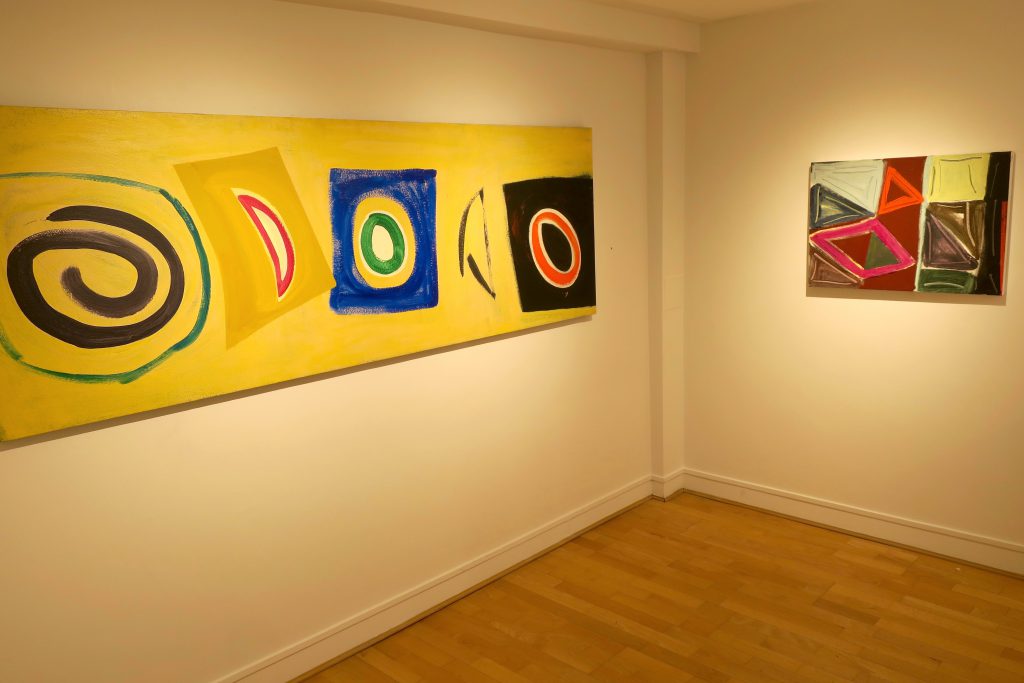 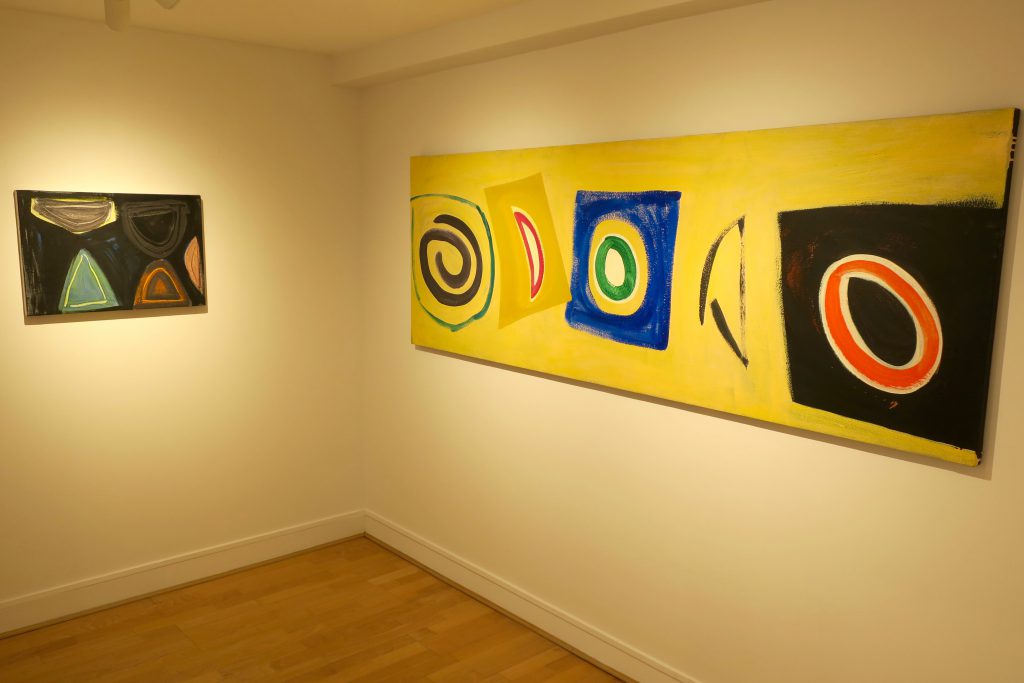 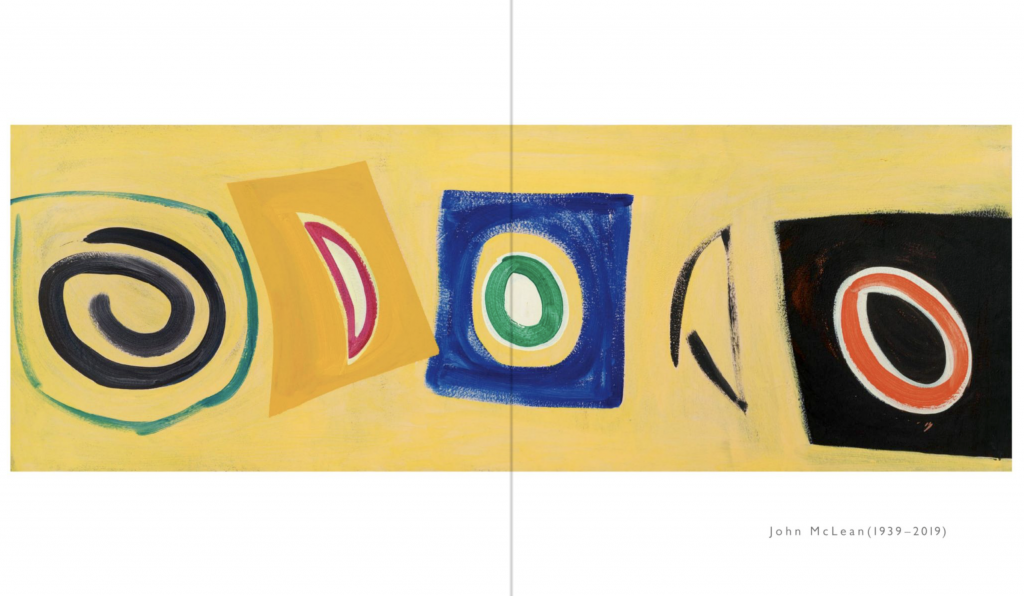 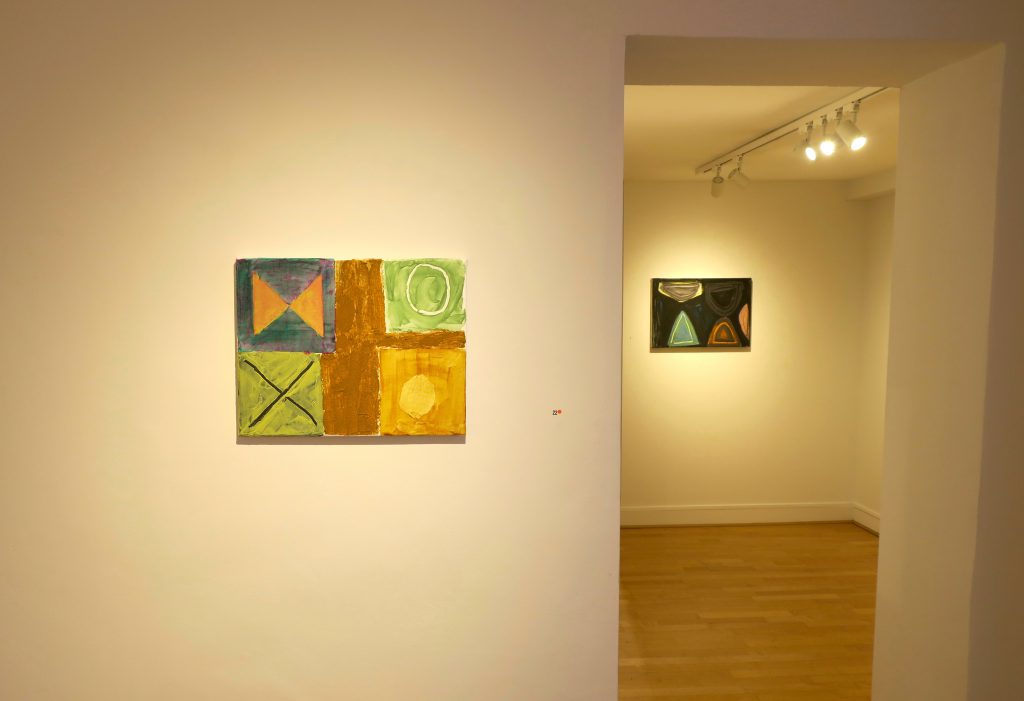 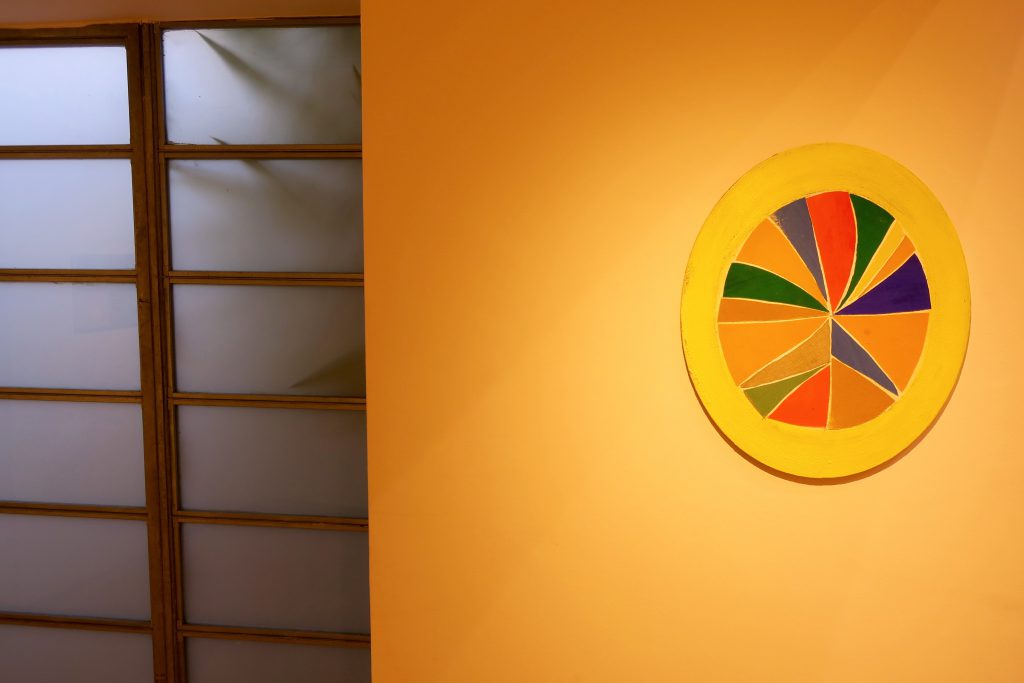 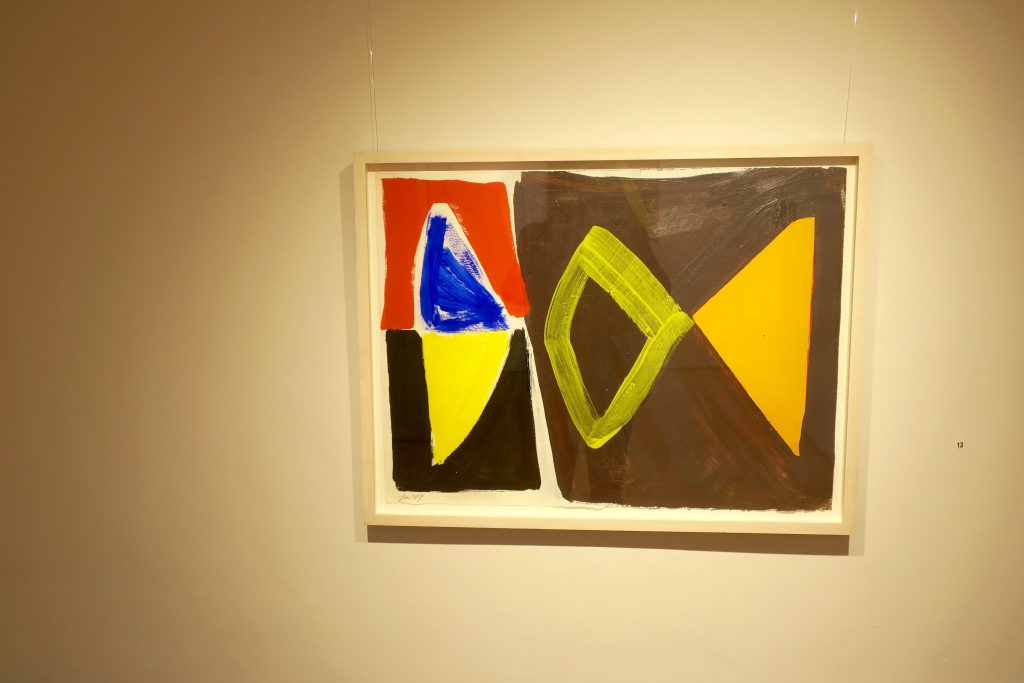 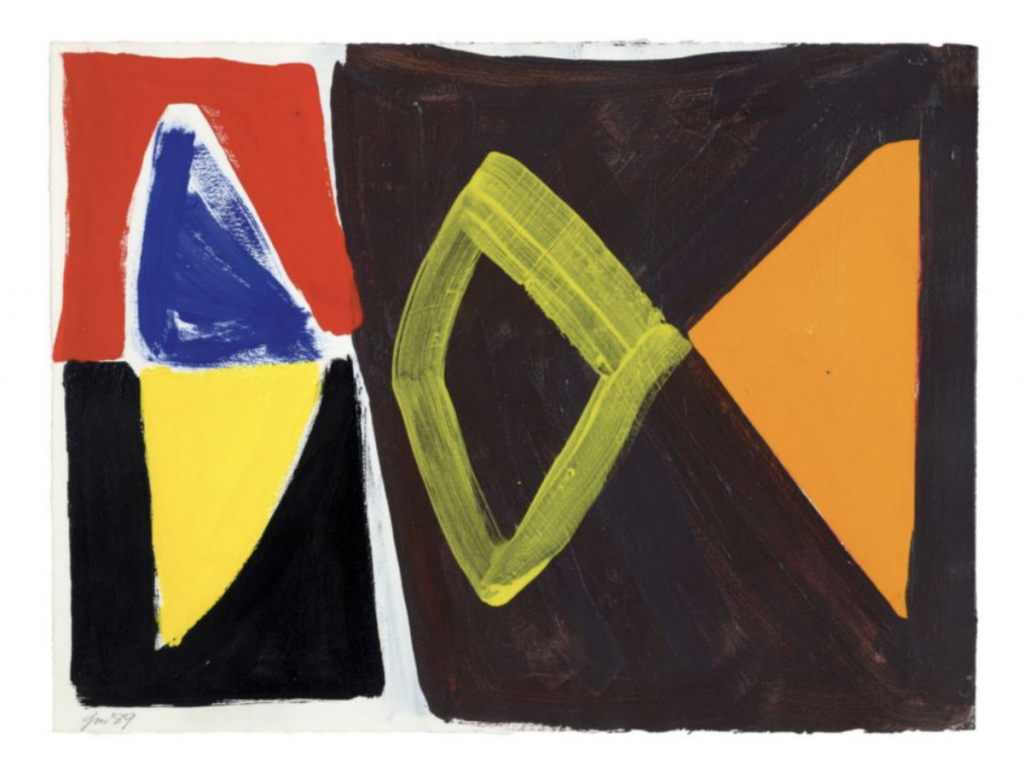 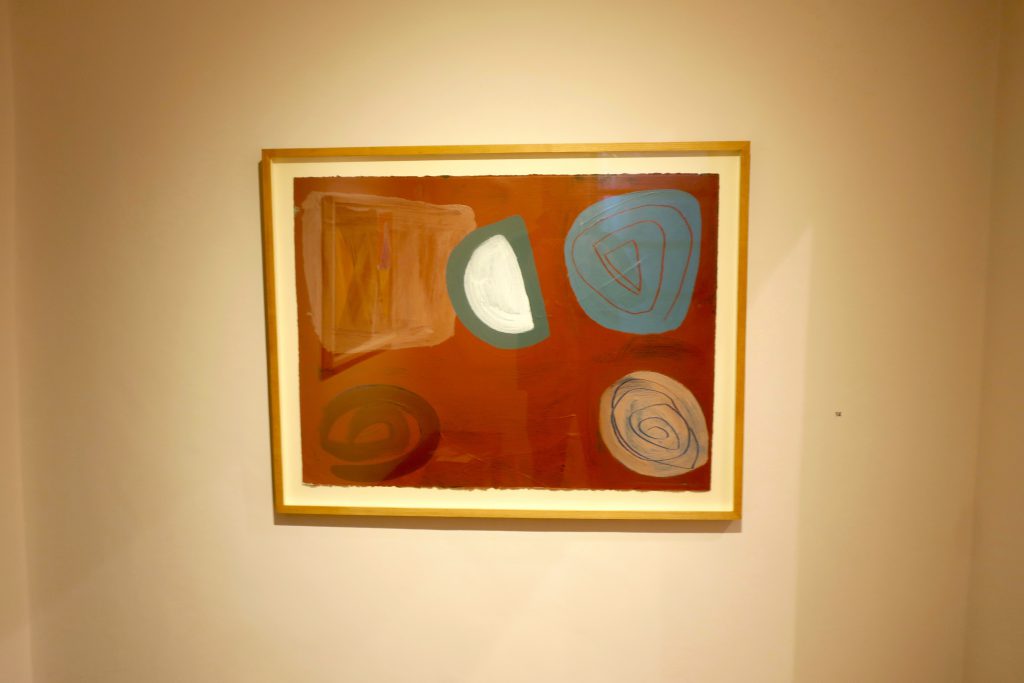 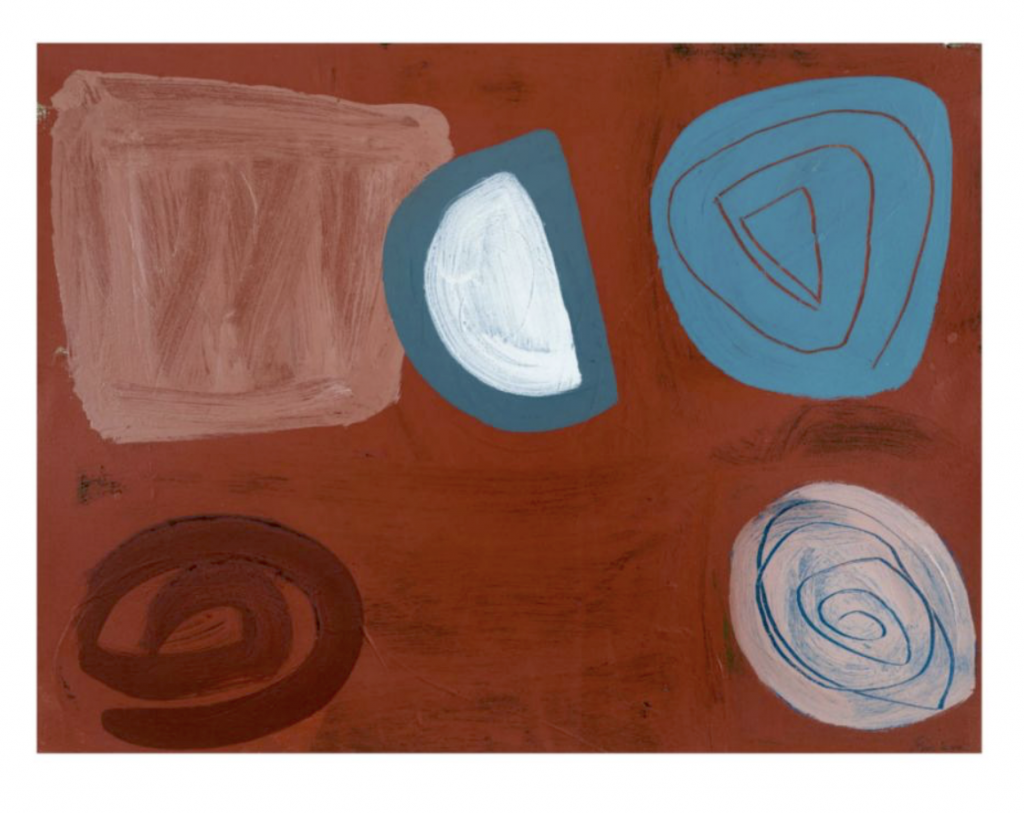 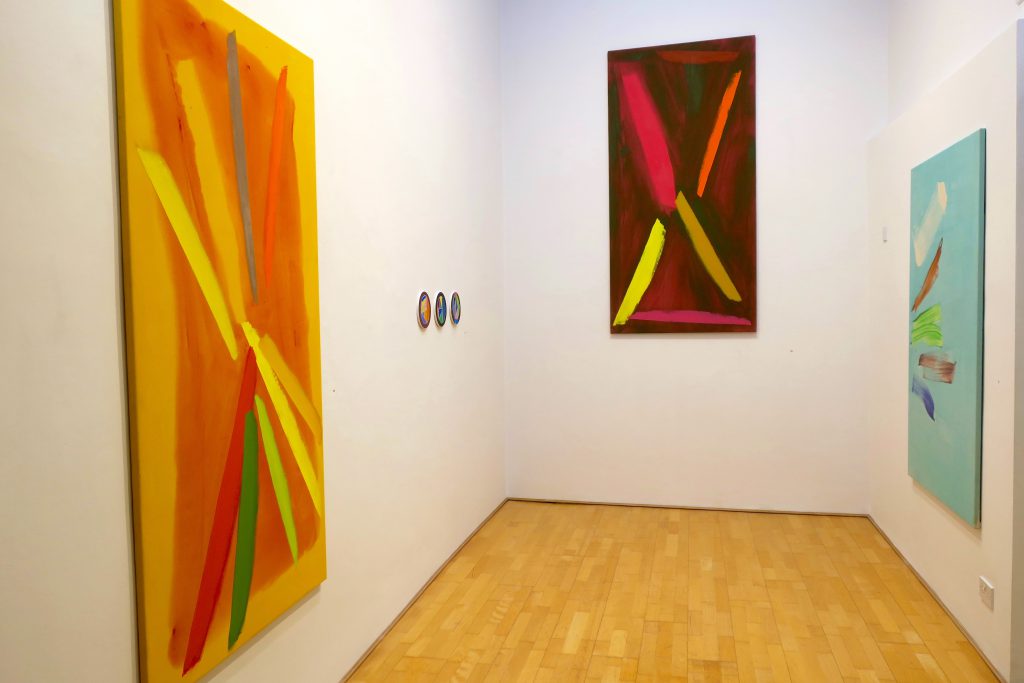 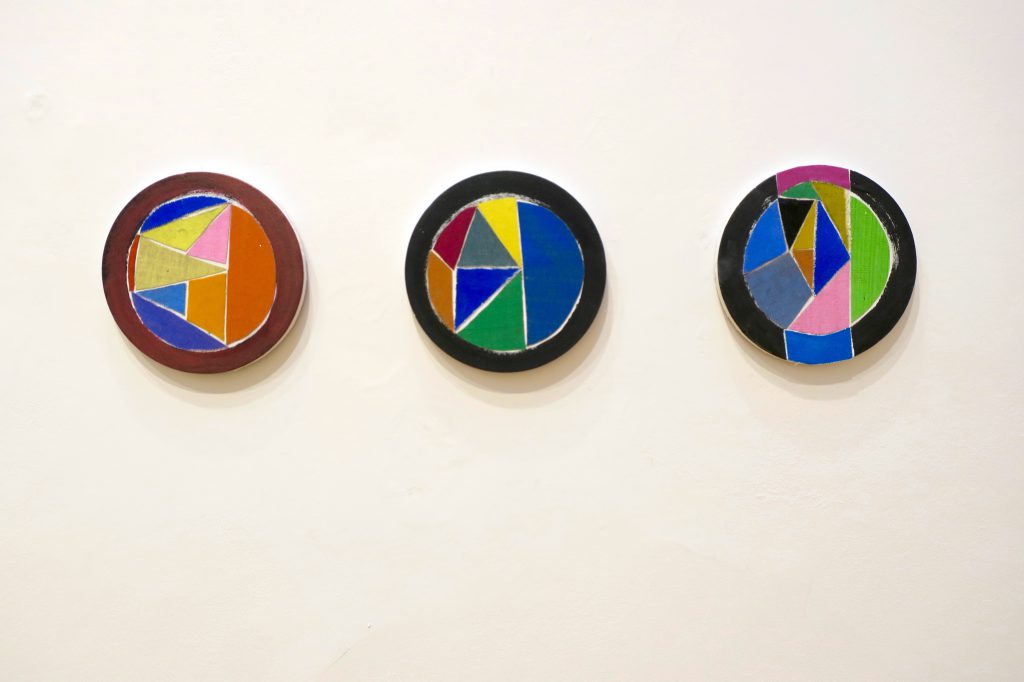 These three little round paintings are not in the catalogue. I don’t know what they’re called. They are made from collaged segments of painted canvas, and the way they are pieced together suggests small stained glass windows. Which reminds me of our recent visit to the Magdalene Odundo exhibition in Norwich where, in the cathedral, we found three beautiful windows designed by John McLean. 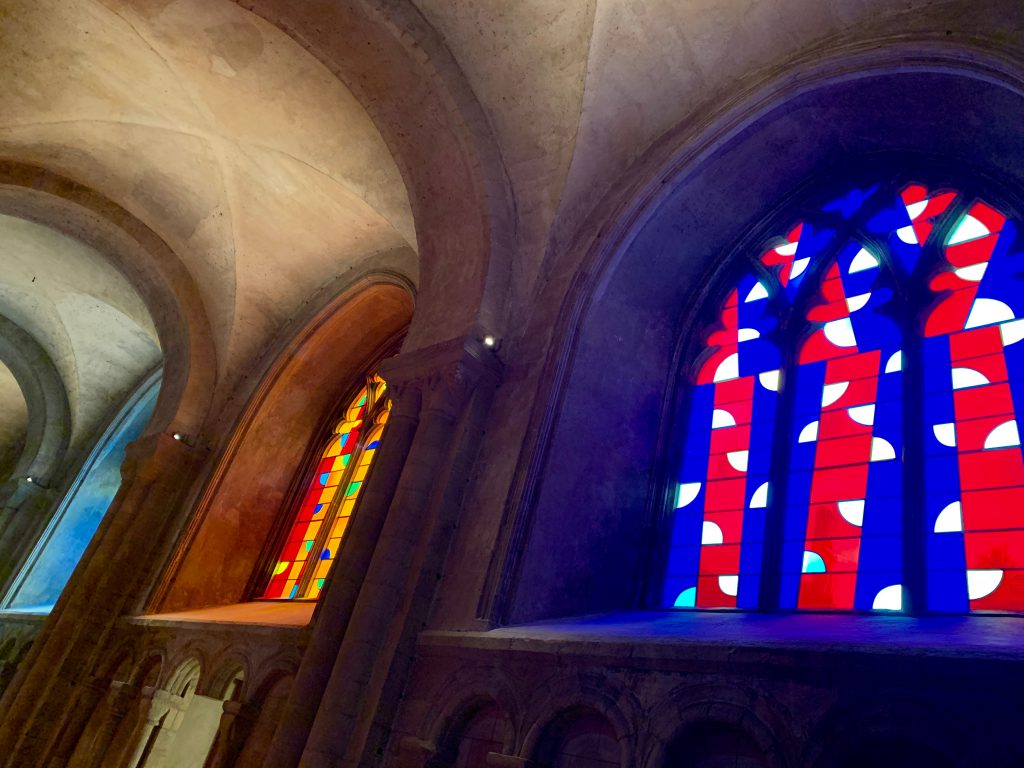 A visit to a Miró exhibition in the 90s brought an interest in biomorphic forms; a trip to Matisse’s Chapelle du Rosaire in Vence, in the south-eastern corner of France, drew him towards collage and stained glass. A Matisse-flavoured suite of three windows, made in 2014 for Norwich Cathedral, was singled out by McLean as a favourite among his own work. 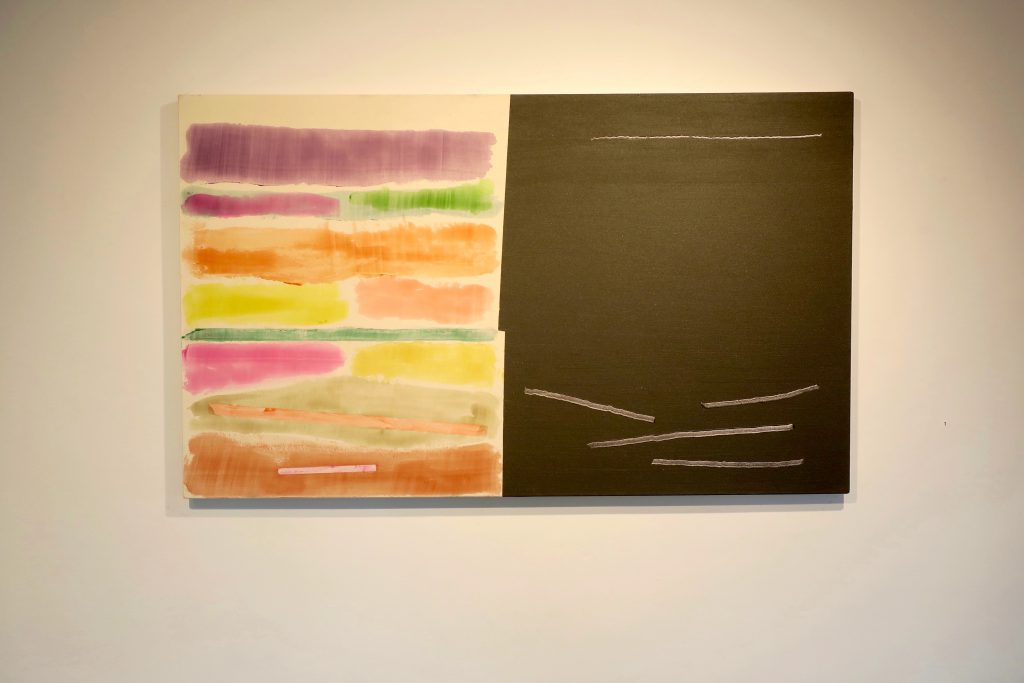 This was John McLean’s last painting.

My pictures have no hidden meaning. To understand all you have to do is look. Everything works in relation to everything else in the painting. If you mull over a part at a time you still take in the rest peripherally. Looking triggers imagination and association.

I work in terms of the feelings I can elicit with drawing colour and surface. The kind of space that accrues varies from picture to picture. Instinct and spontaneity are crucial. Thought goes into it too in the same way it does in singing and dancing.

I like my pictures to be simple and direct. In spite of outside influences my last painting is the most important starting point for the next one. Painting is discovery as well as celebration and I have a constant sense of unfinished business.

Please also see our earlier blogpost – Which Way Up. 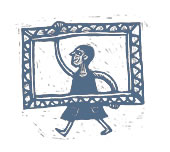