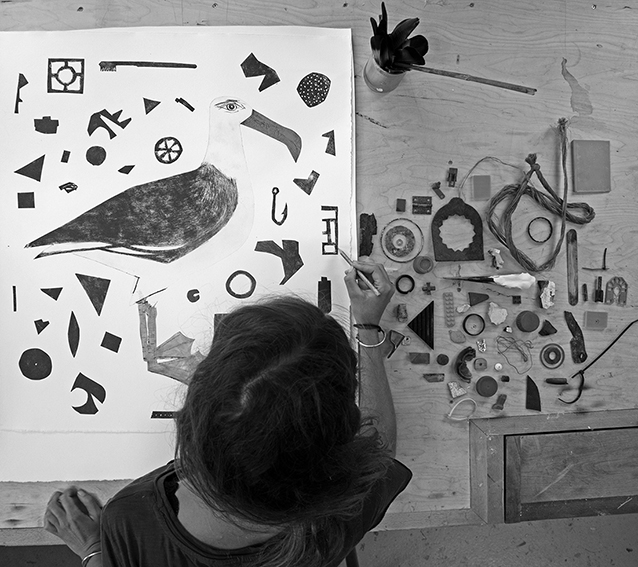 Beatrice Forshall working on a picture of an albatross surrounded by plastic debris she’s collected from the beach; a salutary warning against the the proliferation of throwaway plastic in our modern-day world. It’s an image made in response to Midway: A Message From The Gyre, a film that shows the toxic consequences of too much discarded plastic in the seas.

Both elegy and warning
Midway explores the interconnectedness of species
with the albatross on Midway as mirror of our humanity. 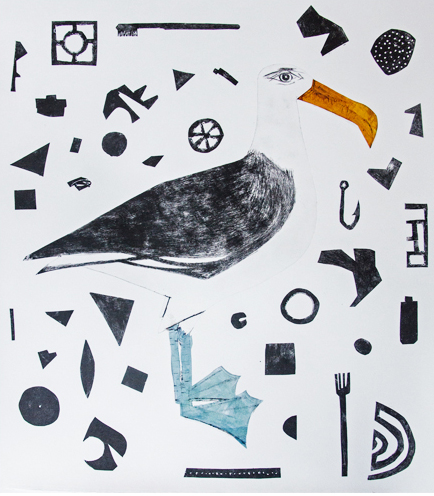 There are 21 species of albatross, 19 of which are threatened with extinction. With a wingspan of up to 12 feet, they are one of the largest birds on the planet, and can live as long as 50 years. Many of the species mate for life. They lay one egg every one or two years. When the young are ready, they leave the colony and spend an astonishing six years at sea, they will return to the island to find a mate and breed.

The two greatest threats to the albatross are human fishing and pollution of the oceans. Long line fishing involves a single line, up to 130 kilometres in length, with thousands of baited hooks attached to it, being pulled by a boat. The albatross try to eat the bait from the line as it is set behind the boat, but instead swallow the hooks and are dragged under and drown.

Scientists who are taking water samples in some of the most remote areas of the ocean are finding 6 times more plastic particles than phytoplankton. The albatross mistake plastic for fish and squid and feed it to their young, this fills the chick’s stomachs, leaving no room for water or food and they end up dying of starvation. As albatross are long-lived birds, they are exceptionally vulnerable to the effects of any threats. They cannot breed fast enough to replace the numbers being killed.

Plastic does not just affect the albatross but all marine life, and ultimately us. It breaks down into smaller and smaller pieces but never fully disappears, and will release chemicals into the fish that eat it. We are as dependent on the wellbeing of the sea, as any other creature. BF