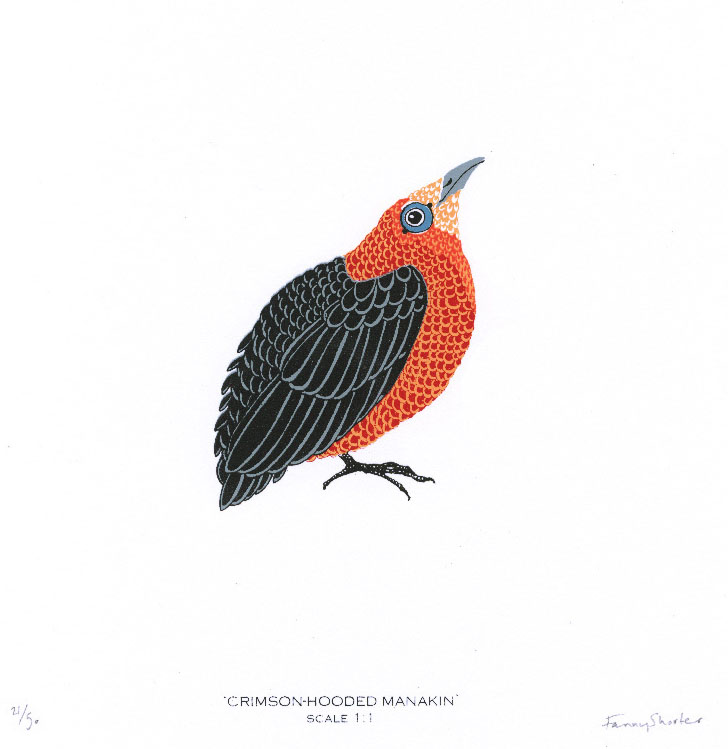 For a couple of years now we have had Fanny Shorter‘s suite of exquisite screenprints featuring some of the world’s smallest birds, all of them depicted life size. They are beautiful and popular and fast becoming an endangered species. I sold two more today, which prompted this post, before they disappear altogether. Shown here is the Crimson-Hooded Manakin, a native of the northern coastal regions of South America, where its habitat is mangroves and riverside forests. It measures just 9 cms.

The manakins are known for the males’ dramatic and elaborate group “dances” on low branches in the forest’s understory. Their brilliant plumage flashes in the shadowy light whilst they sidle sideways along a branch – a movement that may have inspired the late Michael Jackson’s famous “moonwalk”. A dominant male will dance in the company of several subordinate males in a lek.

Quoted from Mystery Bird by Grrl Scientist. A lek apparently is a gathering of males for the purposes of competitive mating display.

Here is a little music for Fanny. And for all her little birds. No moonwalking necessary.