Phoebe and Lydia Lake are artists. They’re also identical twins, which means they know a thing or two about symmetry. So last year, when they were 20 years old, the Tate Britain decided to film their first encounter with one of the museum’s most famous holdings, The Cholmondley Ladies, painted sometime around 1600-1610 by an unknown artist. An inscription describes the ladies as members of the Cholmondley family (pronounced “Chumley”) who were born on the same day, married on the same day and “brought to bed” (gave birth) on the same day. The sharply defined, rigidly symmetric composition depicts two very similar but not identical women (perhaps fraternal twins) dressed in exquisite Jacobean finery, holding their babies. In his essay, The Perception Of Symmetry, arts writer Michael Bird describes his own first reaction to the painting when he was a boy –

The two wintry revenants, propped elbow to elbow in bed with their glowing babies, made a deep impression. The blanched gorgeousness of their outfits, blooded by the hot royal red of the christening gowns, was part of it. So was the spooky incongruity of vivid faces looking out from the picture’s steam-ironed one-dimensionality, as though two people were standing behind it, sticking their heads through holes in the board. Mainly, though, it was their doubleness. 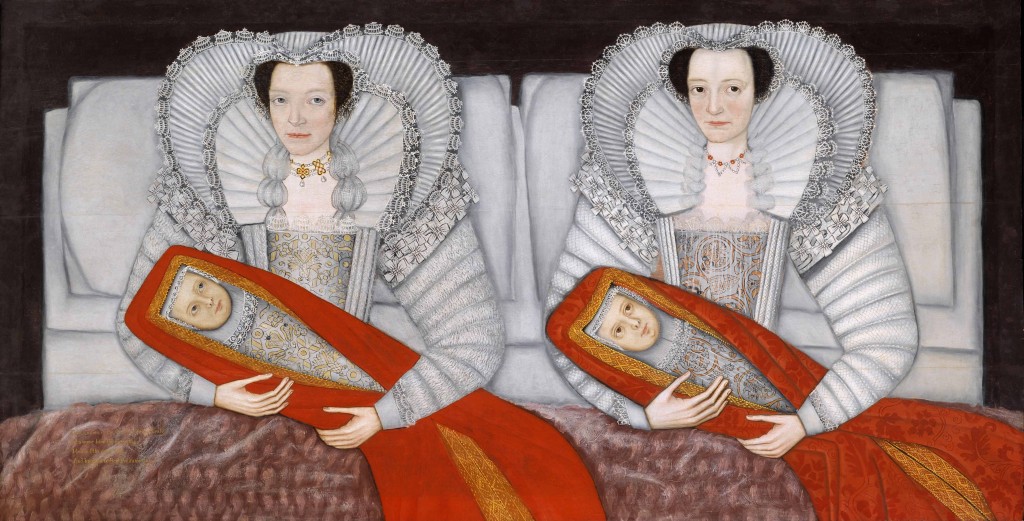