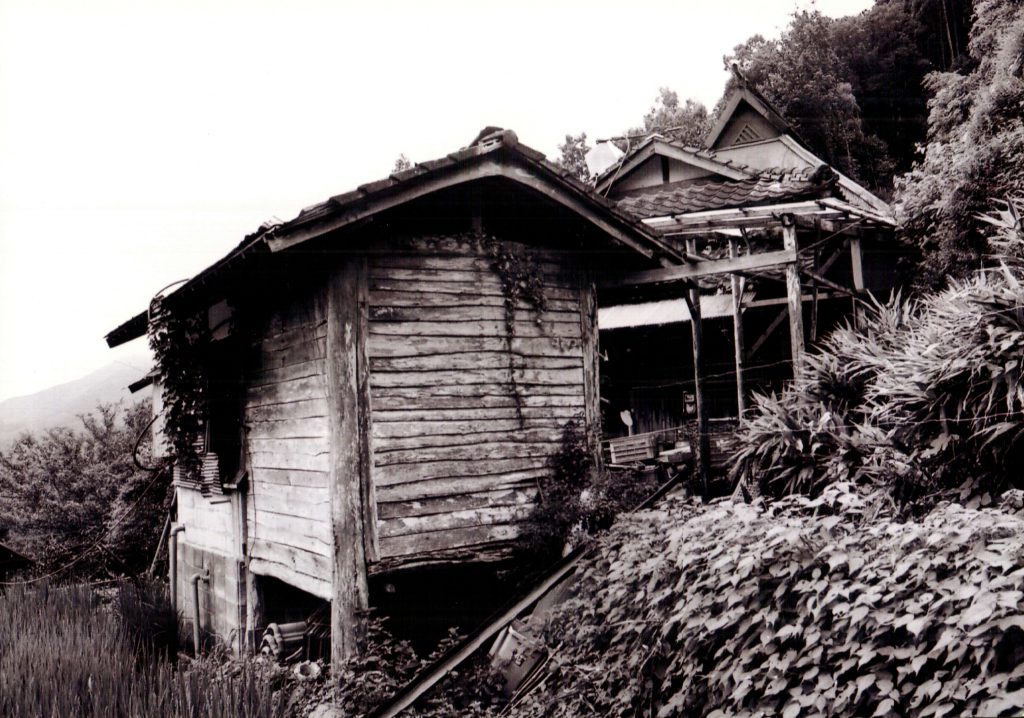 My aunt is a traditional Japanese carpenter who works on building projects using time-honoured methods. She is commissioned to do large and small buildings. I was fortunate to join her for one of the larger projects. She works much like an architect and hires other professionals when needed. She plans all the logistics and makes all the joints and also works on-site.

The project I worked on with her was to build a bunkhouse for a restaurant, so that visitors to its cookery school could stay overnight. I lived with my aunt for the duration in the heart of the mountains of Kyushu, Japan’s third largest island. 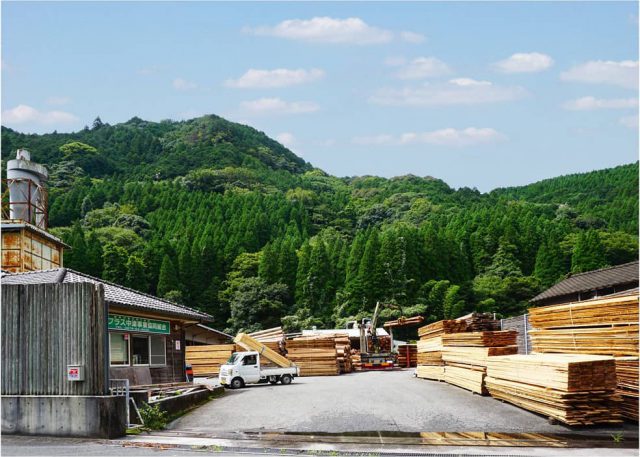 The construction of the bunkhouse began at the woodyard late last August. We loaded the mini truck with 4m lengths of cedar and cypress wood. 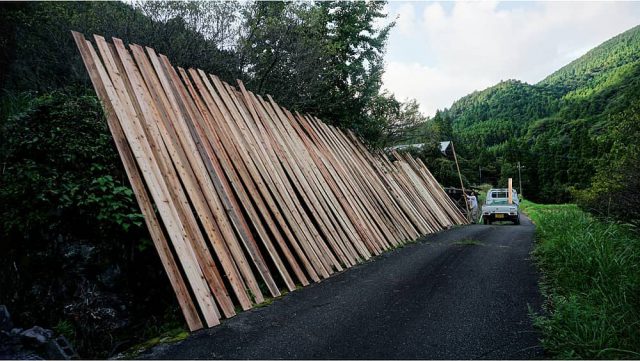 The timber must be laid upside down to the way it grew with the innermost face outwards for maximum drying potential. 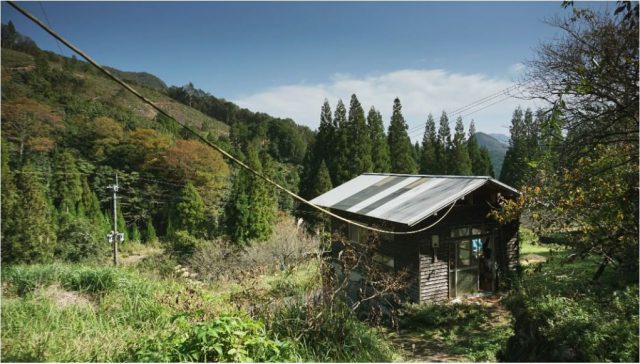 The whole of the first month was spent solely at her workshop cutting the timbers to size and making all the joints, ready for on-site assembly. 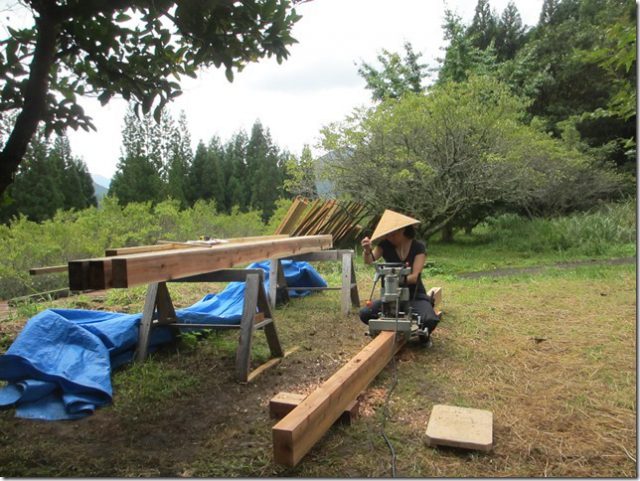 Some of the beams were so big that it was more efficient to work on them outside despite the heat. 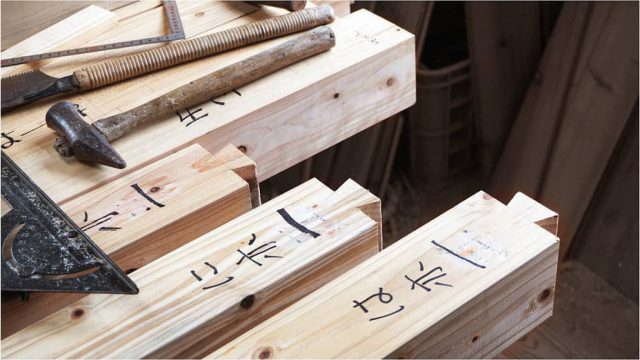 This is a half-lap dovetail joint used for the cross members of a frame structure. The key was to get them done quickly and accurately. 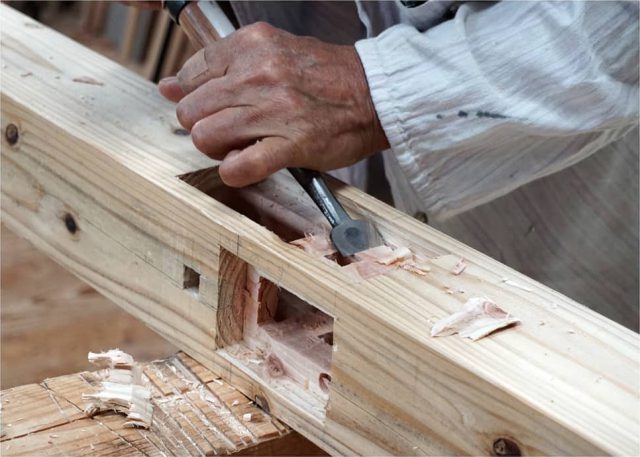 Probably my most favourite joint – when two beams come to a column at right angles. 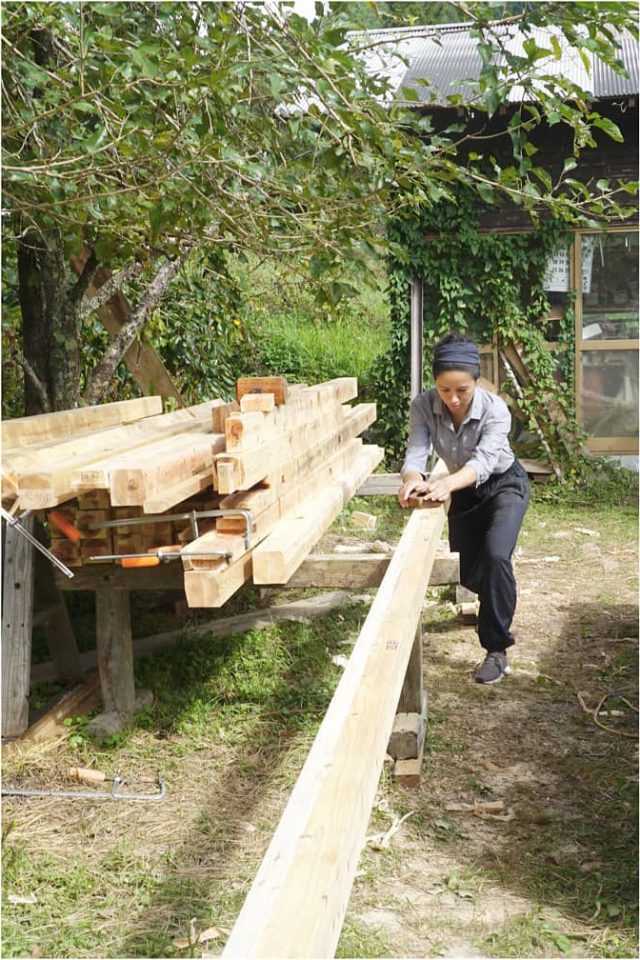 A growing stack of finished beams and columns. This is me, hand-planing an 8m-length beam. 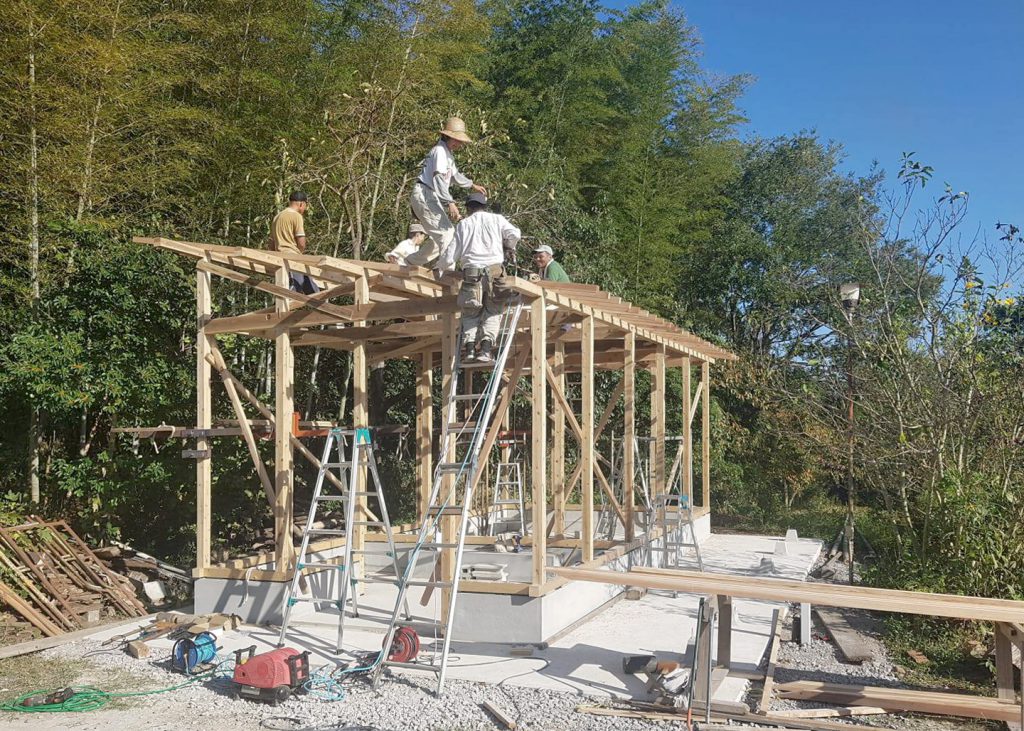 With all the wood prepared we put up the timber frame in one day with two trained carpenters and some extra hands. 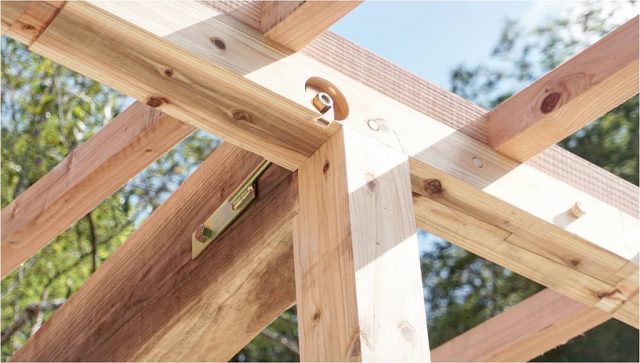 Columns and beams in place! The whole bunkhouse could have been made without metal brackets and ties, in fact it would have been stronger, but building laws require them on new builds! 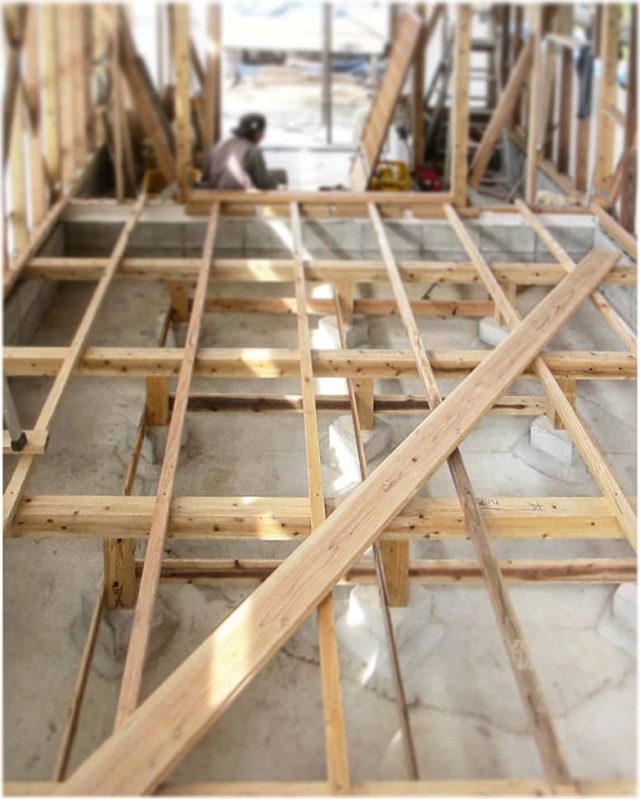 The back room is elevated 500mm for ventilation reasons in Japan’s humid climate. 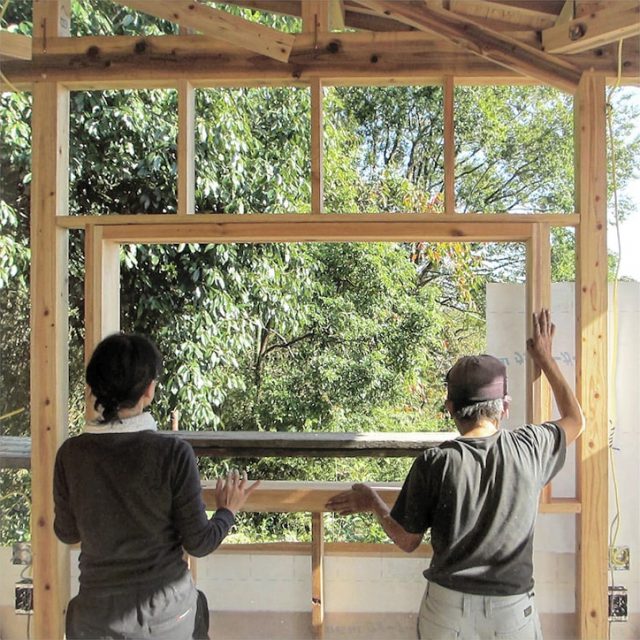 After the main structure was in place, the frames for doors and windows followed, and then the studs for the walls. 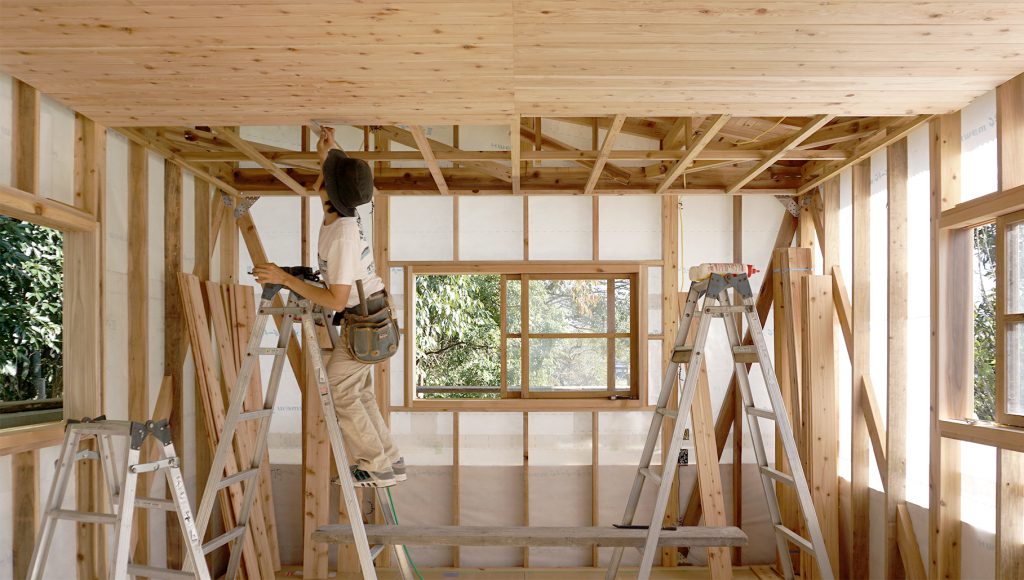 Nailing the ceiling was particularly hard, neck-breaking work, but very satisfying when complete. 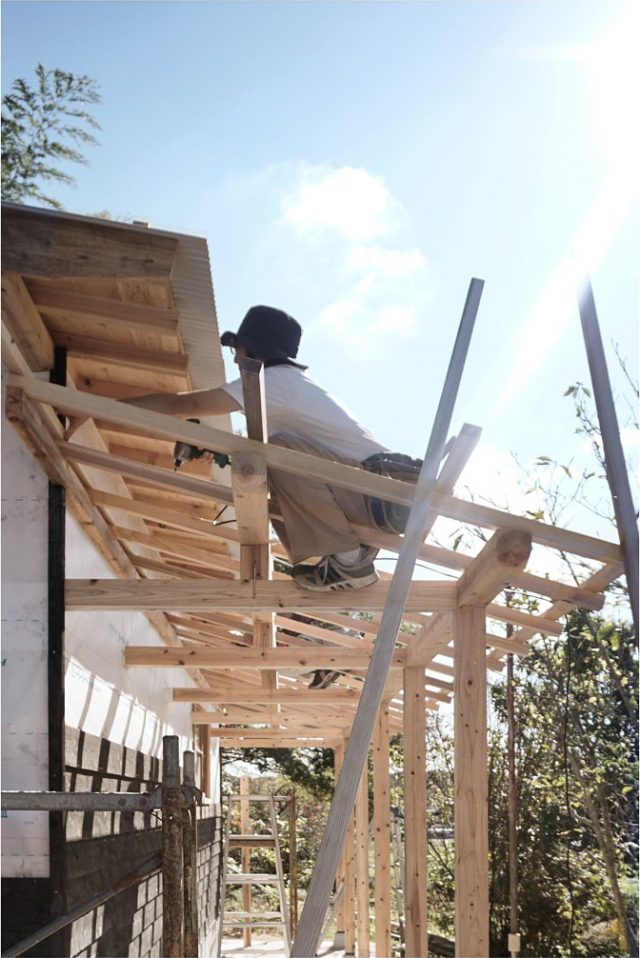 The veranda roof in progress. 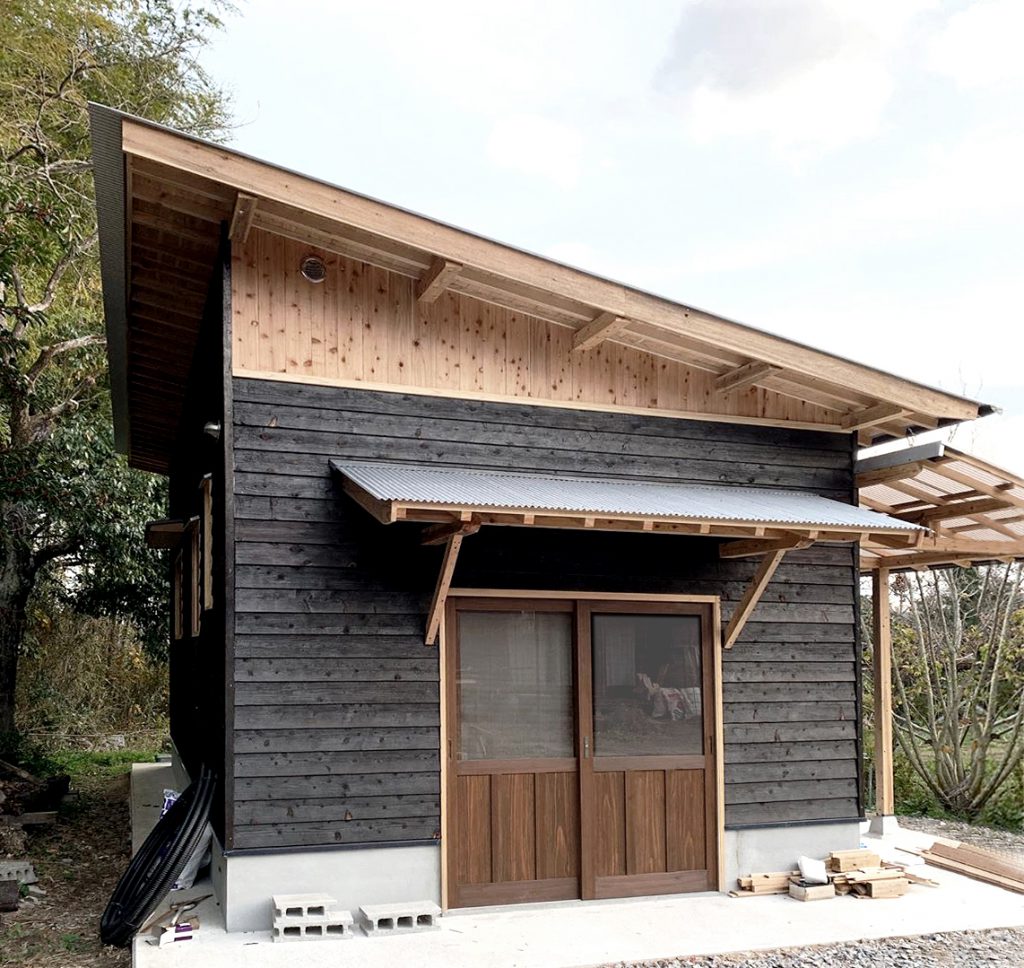 The outside was clad in yakisugi, which is charred cedar, the traditional method of preservation by burning the surface of the wood. 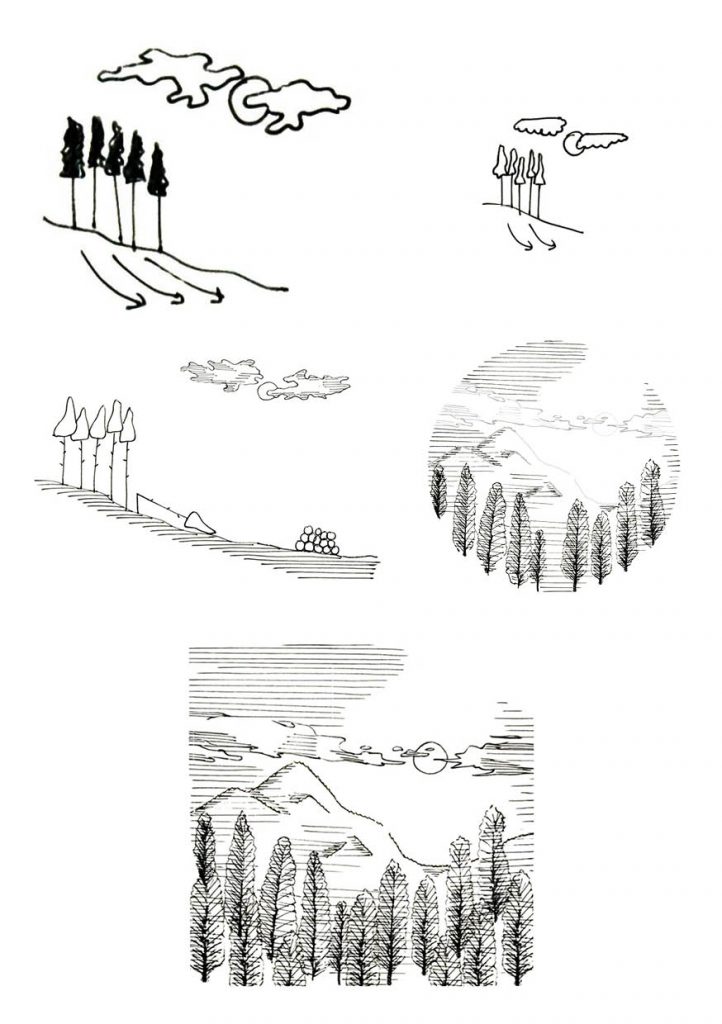 I’ve learnt many things over the years from working with my aunt. I’m currently writing and illustrating a book of all the wisdoms she has taught me about trees, how to treat timber and techniques in carpentry. 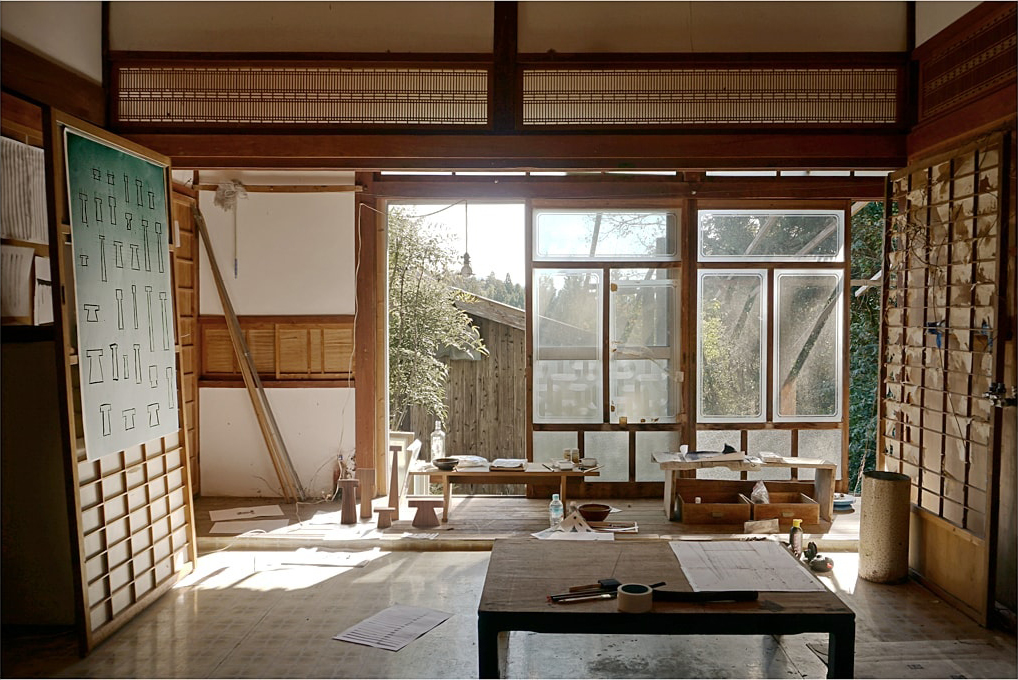 The art I create has been inspired by my on-site daily work in carpentry and cultural traditions and enhanced by the tranquil surroundings of the mountains. This is where I have my art studio in the mountains of Kyushu behind my aunt’s house. 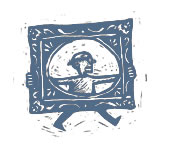 2 Responses to Carpentry In Kyushu